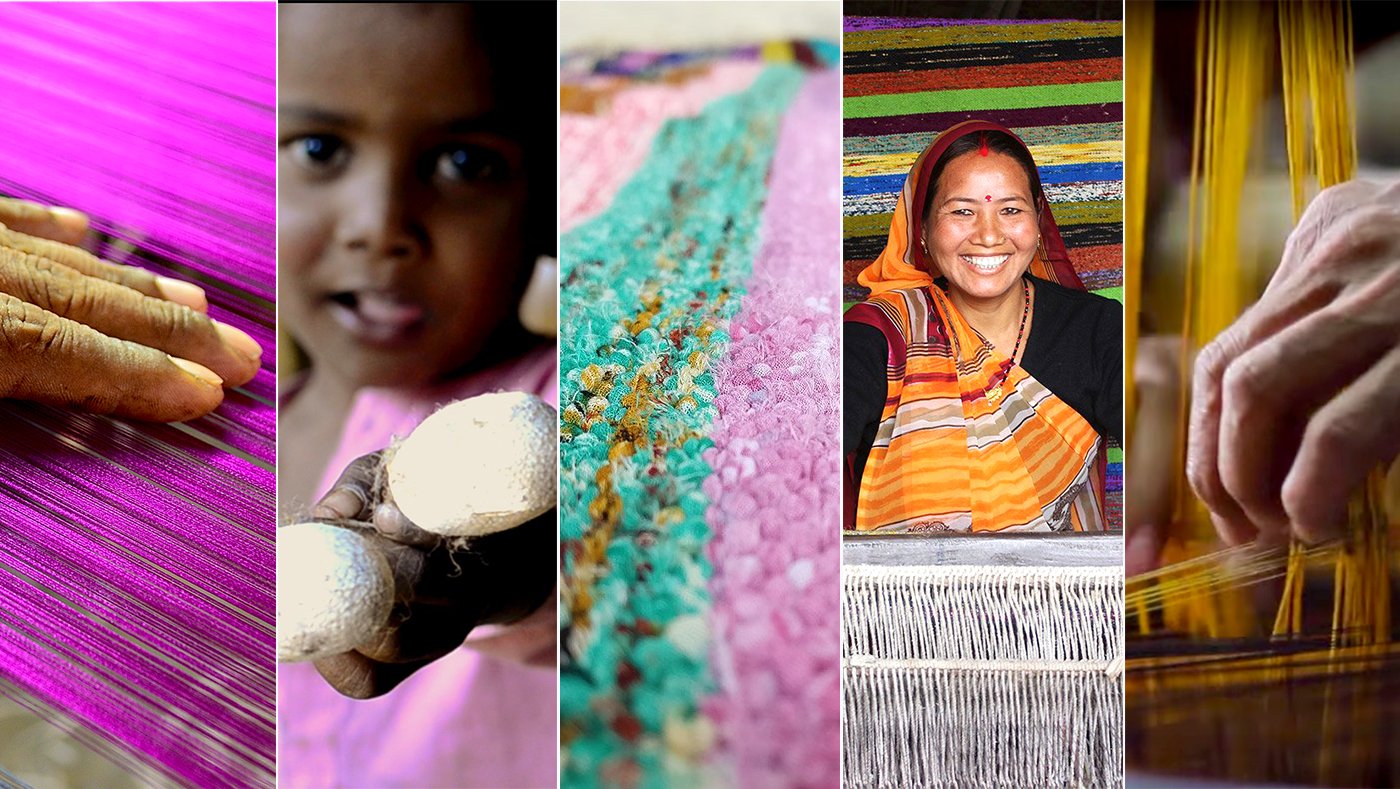 Into the precarious world of India's weavers

At PARI we are documenting weavers and their work not only because of the unparalleled quality of their craft and painstaking labour, but also because they could be the last practitioners of centuries-old skills. Here are stories told through photo essays, films, articles and albums that constitute our growing archive

India's weaving traditions and styles are rich and diverse, but in many parts of the country this extraordinary craft is in decline and weavers are struggling to continue working at their looms. Their incomes are falling, they have to compete with cheaper powerloom-made fabric, and they get little state support.

At PARI we are documenting weavers and their work not only because of the unparalleled quality of their craft and their painstaking labour, but also because they could be the last practitioners of centuries-old skills.

Our stories are many – about an elderly weaver with a portable loom in Sneymo village of Ladakh, the makers of exquisite tussar in Bihar’s Banka district, the suicide of a weaver in Dharmavaram in Andhra Pradesh, why the skilled weavers of Arani in Tamil Nadu work as helpers in canteens and on buses.

These and many more stories told through photo essays, films, articles and photo albums constitute PARI’s growing archive on weavers and their work. Presenting them as a collection here: 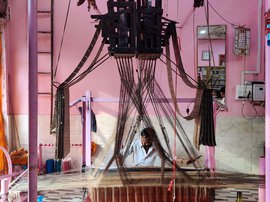 It's been hard days for powerloom weavers in the city's Bazardiha cluster – with lockdowns and monsoon flooding. But it’s the UP government’s review of their electricity subsidy that has them the most worried 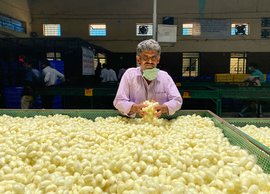 At Asia’s largest cocoon market in Ramanagara, Karnataka, a lockdown-driven steep fall in prices and disruption of the demand-supply chain has badly hit weavers, reelers and, particularly, silkworm farmers 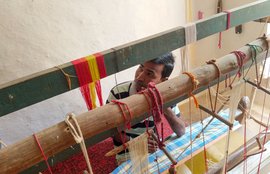 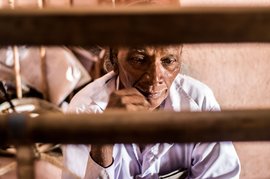 In lockdown, this is no country for old men
• Kolhapur, Maharashtra

In lockdown, this is no country for old men

A repairman, a weaver and a ropemaker – a Muslim, an Adivasi, and a Dalit, highly-skilled craftsmen – in Belagavi, Karnataka and Kolhapur, Maharashtra. All of them elderly and without work under the lockdown

Locking down craft: handmade, hung out to dry
• Churu, Rajasthan 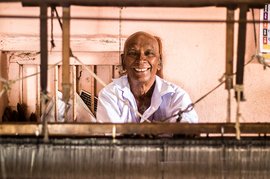 A life measured in metres and yards
• Kolhapur, Maharashtra 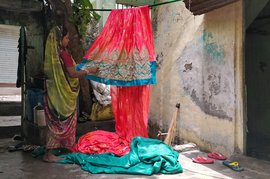 Pulling out threads for 500 minutes every day
• Surat, Gujarat 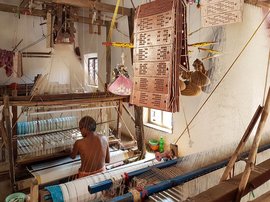 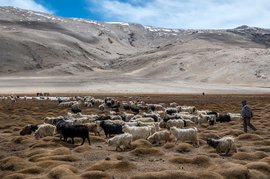 Weaving the story of the pashmina shawl
• Leh, Jammu and Kashmir

From Changthangi goats in the Tibetan Plateau to retail stores in Srinagar, the making of the pashmina shawl involves many – pastorialists, wholesalers, spinners, dyers, designers, embroiderers and entrepreneurs 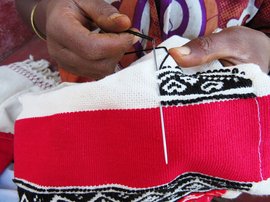 'Copying our designs is not correct'
• Nilgiris, Tamil Nadu 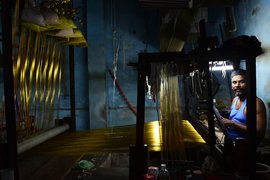 Labouring at the looms of Onnupuram
• Tiruvannamalai, Tamil Nadu

Labouring at the looms of Onnupuram

Almost every house in this village in Tamil Nadu has a handloom, and the bundles of colourless thread that enter Onnupuram leave for high-end showrooms in Chennai and other markets as rich silk sarees 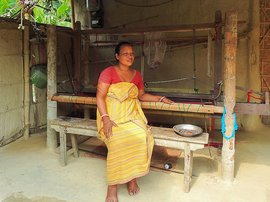 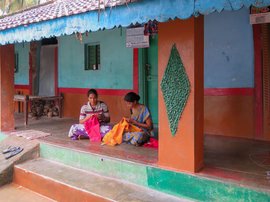 Stitching together an upturn in Sittilingi valley
• Dharmapuri, Tamil Nadu

Living in the rooms by the looms
• Surat, Gujarat

Living in the rooms by the looms

Around 8 lakh workers from Odisha, after strenuous shifts in Surat’s powerlooms, stay in rotation in crowded rooms, amid power cuts, scarce water, filth and noise. Illnesses are common, as are stress and alcoholism 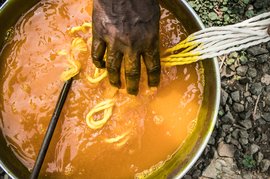 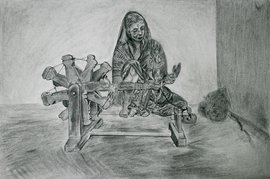 PARI volunteer Sanket Jain aims to traverse 300 villages across India and, among other stories, produce this feature: a photograph of a rural scene or event and a sketch of that photograph. This is the ninth in the series on PARI. Draw the slider either way to see the photo or sketch in full

Lakhs of migrant workers from Ganjam in Odisha who operate powerlooms in Surat, the country’s polyester capital, risk serious injuries and accidental deaths every day. But desperate for work, they continue 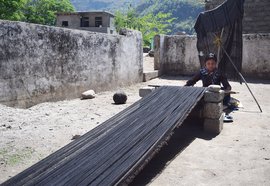 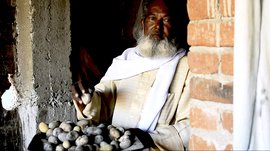 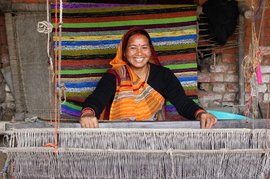 Ladaiti Devi of Salmata village in Uttarakhand is a self-assured and wise warrior, who other women look up to. She tried many ways of earning some money despite her family’s displeasure, until she found her calling in weaving durries – and now her fingers weave a magic that is locally renowned 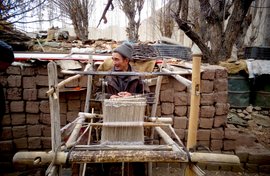 'The loom is my love, my legacy'
• Leh, Jammu and Kashmir 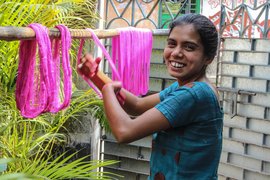 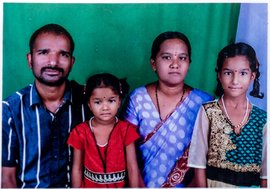 ‘Without khadi, I am not there’
• Anantapur, Andhra Pradesh 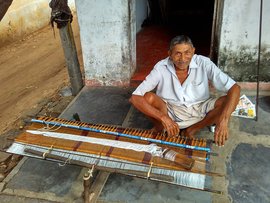 Most of the handloom weavers in Pedana in Andhra Pradesh are elderly, as are many of the town’s Kalamkari printers – a lack of state support and poor incomes have impacted both industries and forced the younger generation to migrate for work

In Nirona village in Kutch, the Khatri family's passion for Rogan art has kept the tradition alive for 300 years 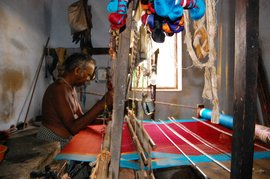 The warp, the weft, and the waning loom
• Thiruvallur, Tamil Nadu 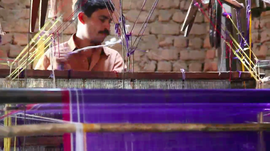 The fading weaves of Duajhar

Weavers of Odisha speak of their waning craft and diminishing livelihoods 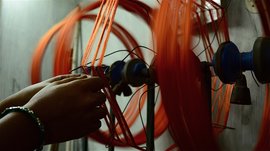 The story of M. Murugaiya and his family of weavers