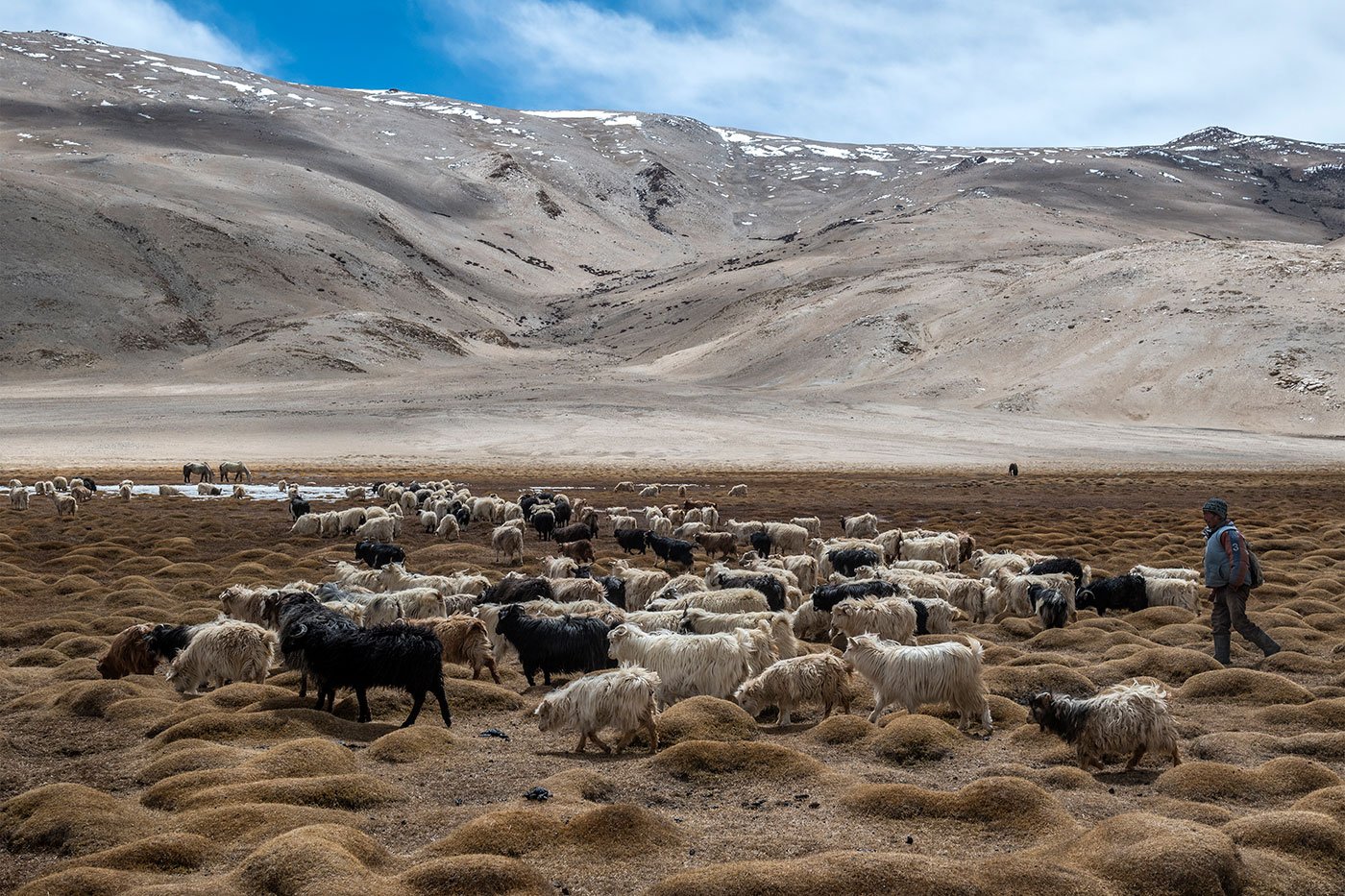 From Changthangi goats in the Tibetan Plateau to retail stores in Srinagar, the making of the pashmina shawl involves many – pastoralists, wholesalers, spinners, dyers, designers, embroiderers and entrepreneurs

“It was all different a few years back,” said Niaz Ahmed, at his shop in Srinagar’s Lal Chowk. The demand for pashmina shawls was robust, and Niaz and other shop-owners could make a profit by selling the shawls across India as well as abroad.

That was in February 2016, when I started to trace the pashmina shawl from the Changthangi goats to the retail stores; I am interested in the history of ancient Indian trade routes that connected India and Central Asia. Pashmina and silk were prized commodities on this route.

The Changthangi goats are reared by the nomadic Changpa pastoralists in the Changthang region – a western extension of the Tibetan Plateau, near the India-China border in eastern Ladakh. At an altitude of around 4,000 to 5,000 metres, it’s a harsh habitat.  The search for pastures for their animals – sheep, pashmina goats, a few yaks – and the long winters from late September to May make living here hard. Collecting fuel, childcare, cooking, spinning pashmina thread – the work days are long.

On a cold morning in March 2016, I met Bensen Tsering leading his flock in southeastern Changthang, between the towns of Hanle and Chumur. He told me that the cooperative society in Leh – the All Changthang Pashmina Growers Cooperative Marketing Society, affiliated to the state-run Ladakh Hill Development Council – purchases raw pashmina directly from the pastoralists at a fixed rate, cutting out the middlemen of the past who often wouldn’t give a fair price. The cooperative now offers Rs 2,500-Rs. 2,700 for a kilo of raw pashmina. This price has not gone up much over the last 4-5 years because of falling demand. Non-pashmina shawls and woollen apparel flooding the market from Punjab and other states have affected this trade.

Around 40 kilometres from Hanle, I also met Pema Choket. Of Pema’s six children, only her eldest daughter, 23-year-old Dechen, wants to continue their family’s way of life. “She is our flag-bearer,” Pema said, adding that she has a great love for their animals and the pastoralist life. 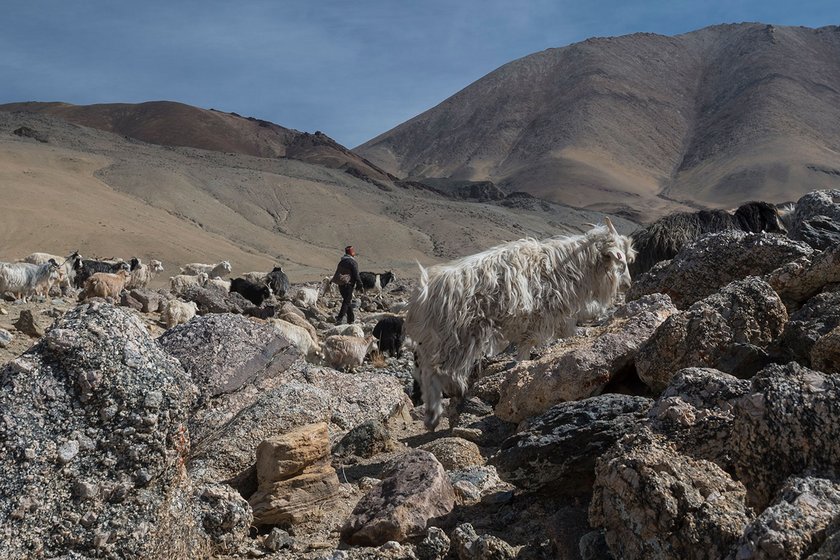 But many Changpas are slowly selling their tents and livestock and moving to other occupations or to Leh. Pema’s eldest son is a truck driver, another son is a porter at road construction sites, a daughter works in an office in Leh. She says “all her family members, who are in towns have got easy lives.”

In Leh, I met Kashmiri traders buying raw pashmina at Rs. 8,000-9,000 a kilo from the cooperative, sometimes going up to Rs. 20,000, depending on the quality and demand. The longer the staple length and smaller the diameter, the better the quality. The pashmina from eastern Ladakh, I was told, is considered among the finest.

I met Stanzin Dolma too in Leh. She had stopped spinning by hand. “Our work is slowly bowing down to power looms [that is, the spinning machines],” she said, with a sigh. She felt she could not make her hands go fast enough to compete with the machines. The traditional spinning wheels (locally called yender ), used to convert raw pashmina into yarn, are now competing with more cost-effective spinning machines owned by families who can afford them. In the narrow lanes of Old Srinagar (mainly in the Nawhatta and Rainawari localities), I would regularly hear the sounds of these machines running.

Once woven, pashmina shawls are dyed by hand in workshops in Srinagar. The dyers earn Rs. 150-200 per shawl (and can earn Rs. 15,000- 20,000 a month working on other woollen apparel as well). The workshops then send the dyed shawls for washing at the banks of Jhelum.

The next step is usually designing on shawls by hand, a generations-old art. In  Ganderbal block in Srinagar district, and Bandipore and Sopore tehsils in Baramulla district, to name only a few, needlework on pashmina shawls remains the livelihood for many artisans. They use wool thread to weave intricate patterns. Silk thread is used rarely in needlework, and the price of such a shawl is higher.

“We cannot work for more than 4-5 hours a day, it strains our eyes,” Nazir Ahmed, an artisan in his 50s, told me in Ganderbal. Because needlework cannot be done all day, many artisans also double up as agricultural labourers. Ahmed said he earned Rs. 200-300 a day from the pashmina wholesalers, depending on the design. “It comes to us naturally. We can beat computers...” he said. 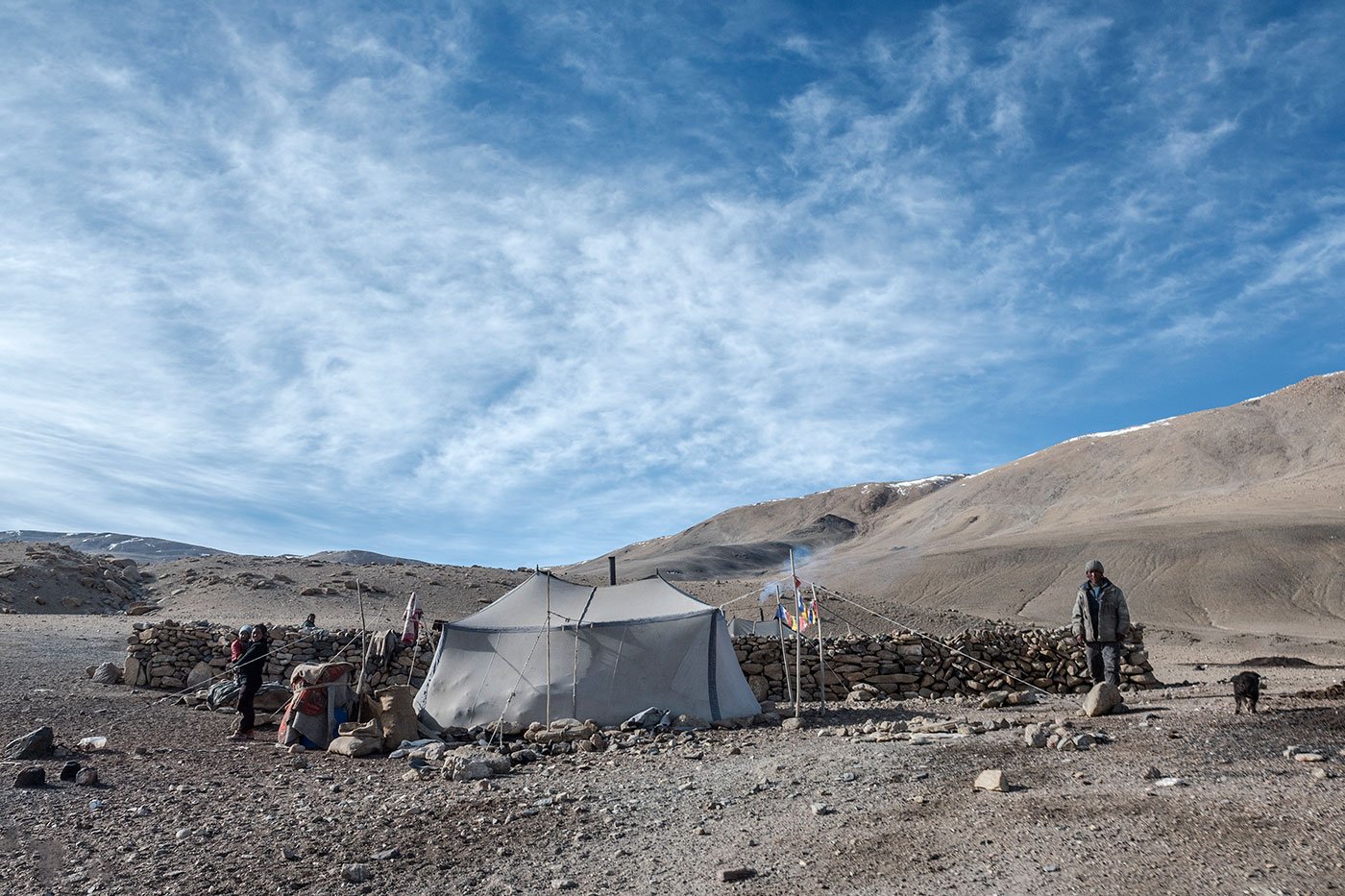 A family of Changpa pastoralists – Jampa Chokey, Tsering Dolma and their daughter Sonam Nyidon in Changthang, around 80 kilometres southeast of Hanle. 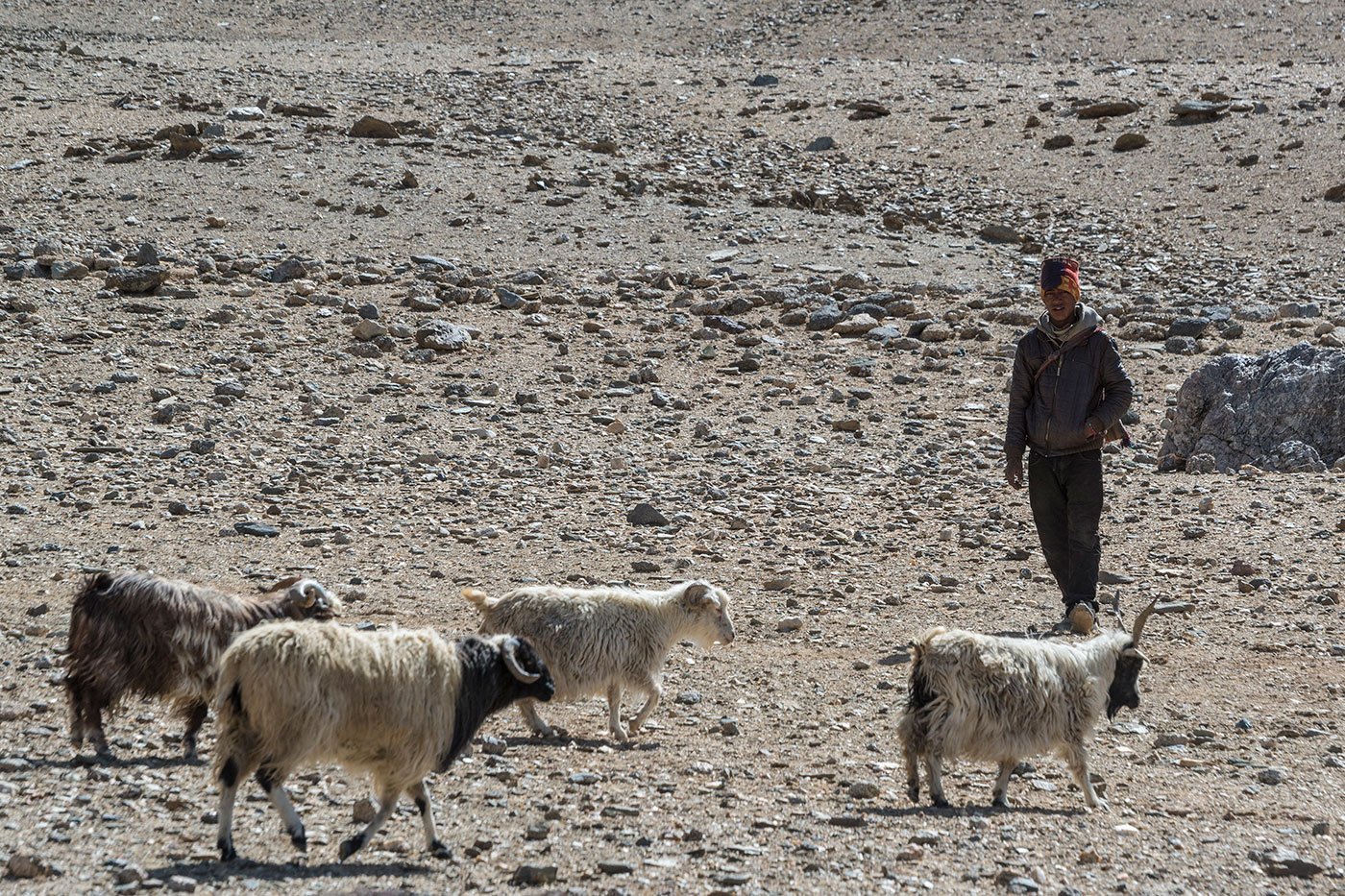 Bensen Tsering takes his goats out for grazing in southeastern Changthang, across difficult stretches of open land, boulders and steep slopes. The day’s grazing lasts for about 6-8 hours, depending on the availability of grass. Most pastoralist families have around 100-150 animals, and the entire lot is taken out to graze at the same time. 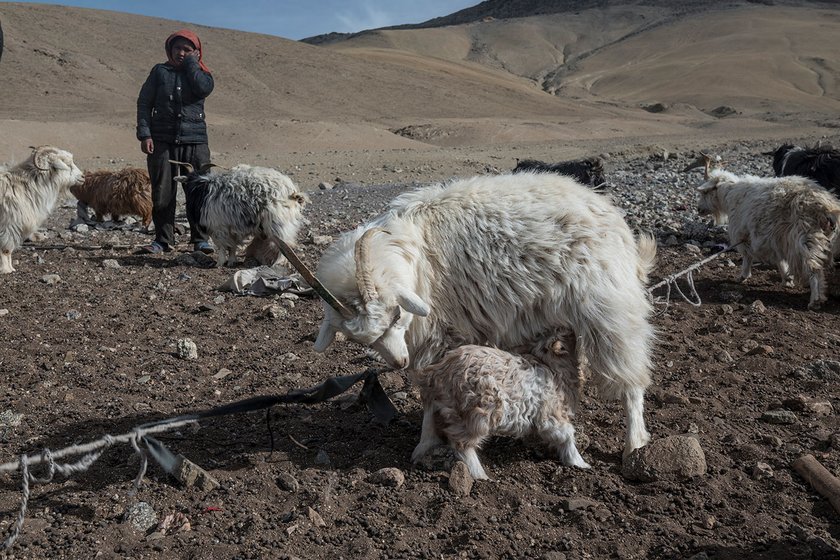 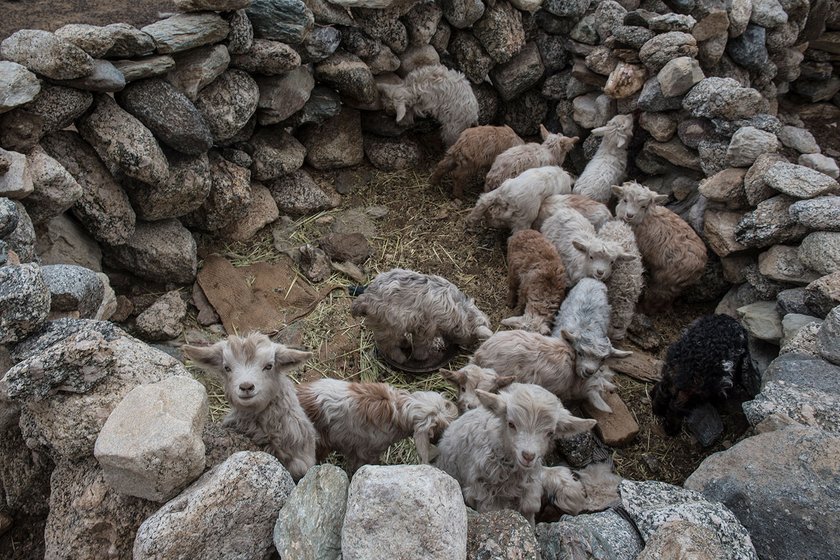 Pema Choket's daughter Dechen watches over a two-day old lamb as it clings to its mother in early spring, March 2016). She makes a warm shelter for the baby lambs – underground ditches covered with rocks, and lids made of wool and wooden frames.  All members of pastoralist families take the utmost care to ensure that the newborns can survive in these harsh surroundings, and not succumb to steep drops in temperature, icy winds, or frost. 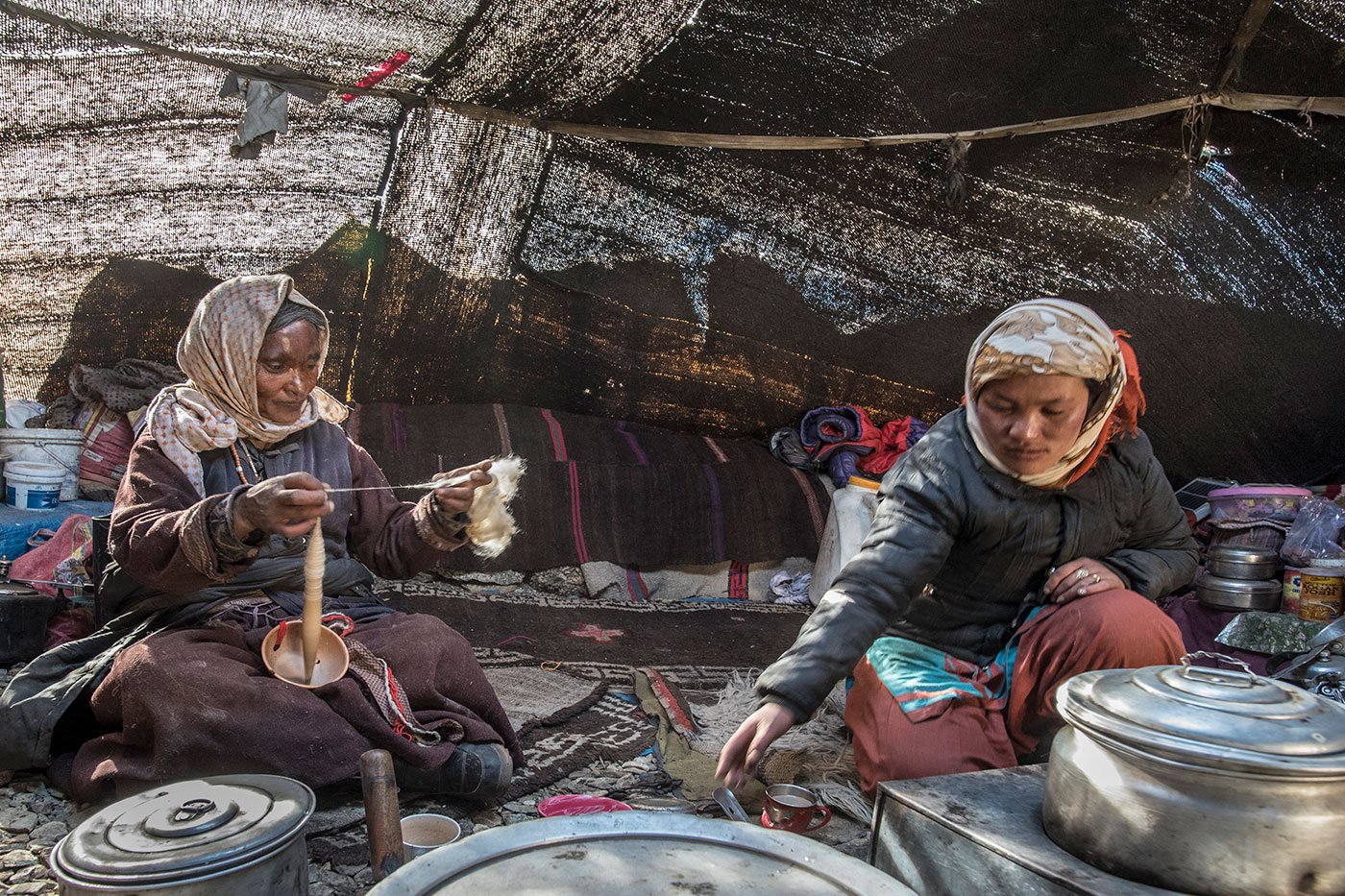 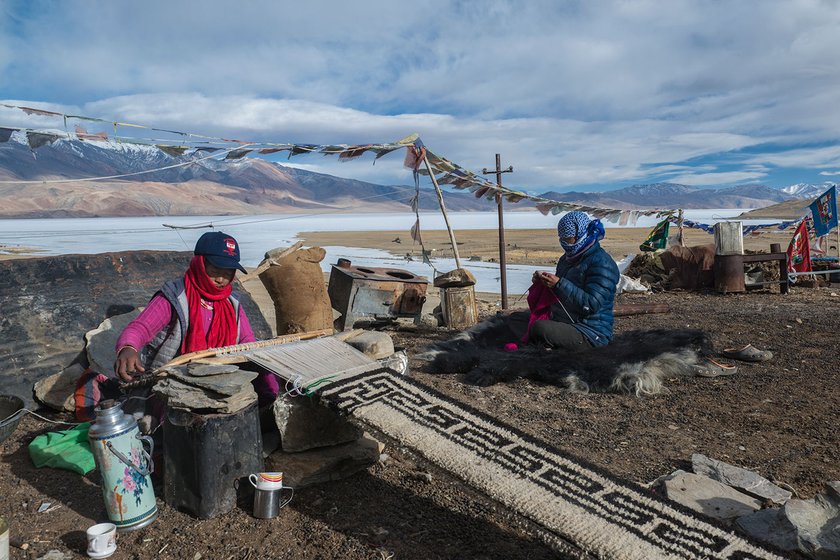 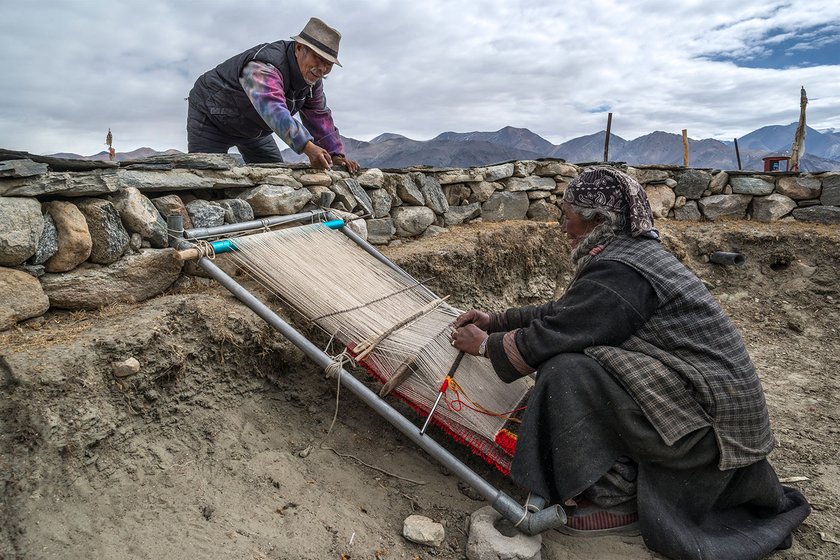 Left: In Korzok village, Tsering Norzom and Sanoh Dolkar are unperturbed by the freezing winds blowing over the frozen Tso Moriri lake. They are busy making a carpet and sweater with wool from their own herd of goats and sheep. Right: Tsering Dondap and Yama chat as she weaves a carpet on the bank of Pangong lake in Spangmik village, around 60 kilometres southeast of Tagste town. 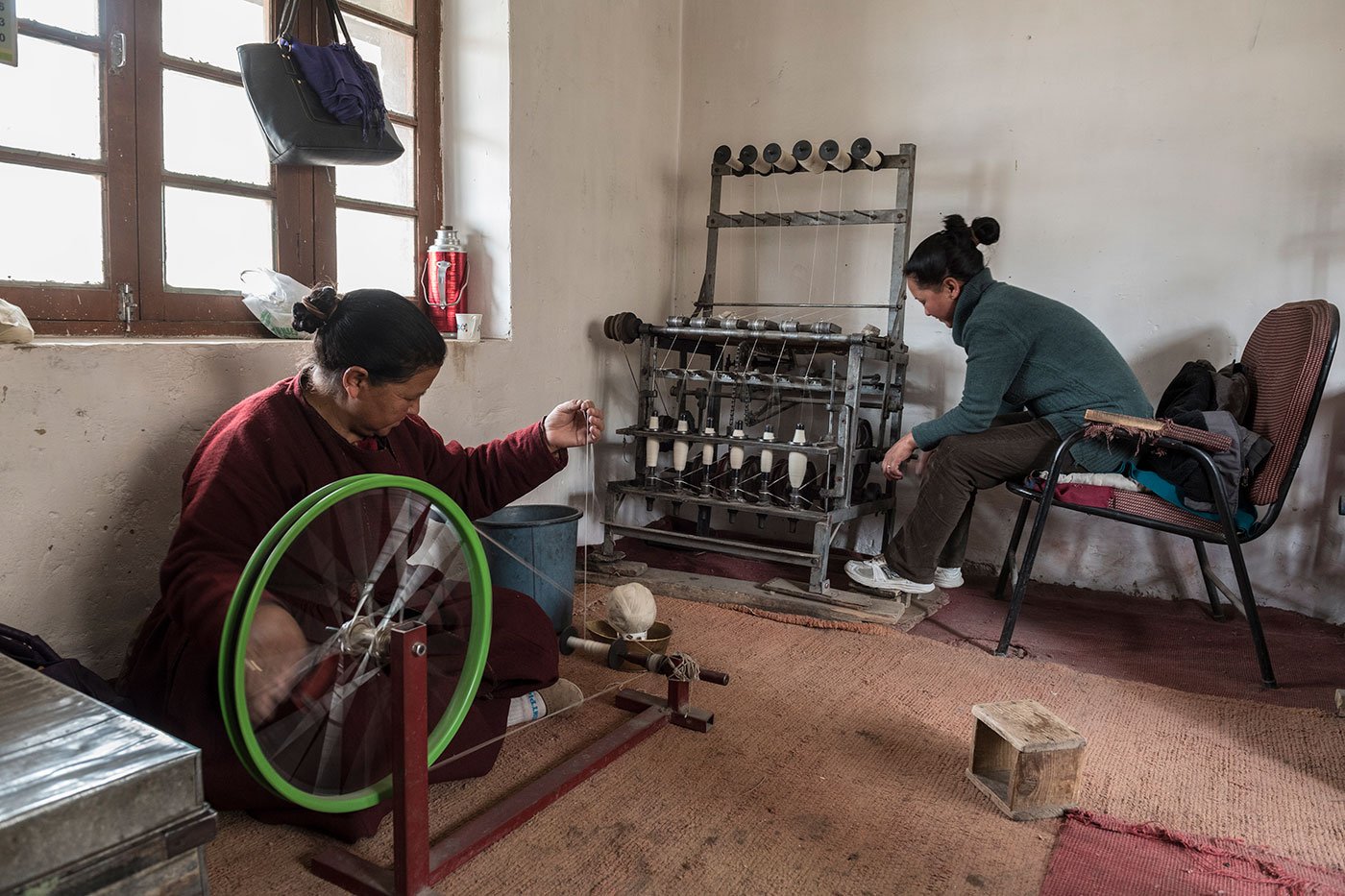 Stanzin Dolma and her daughter in their backyard spinning with a yender and a borrowed spinning machine. Many families still prefer to use the traditional spinning wheel to convert the raw pashmina to yarn. They are used to it and it is easy to repair. 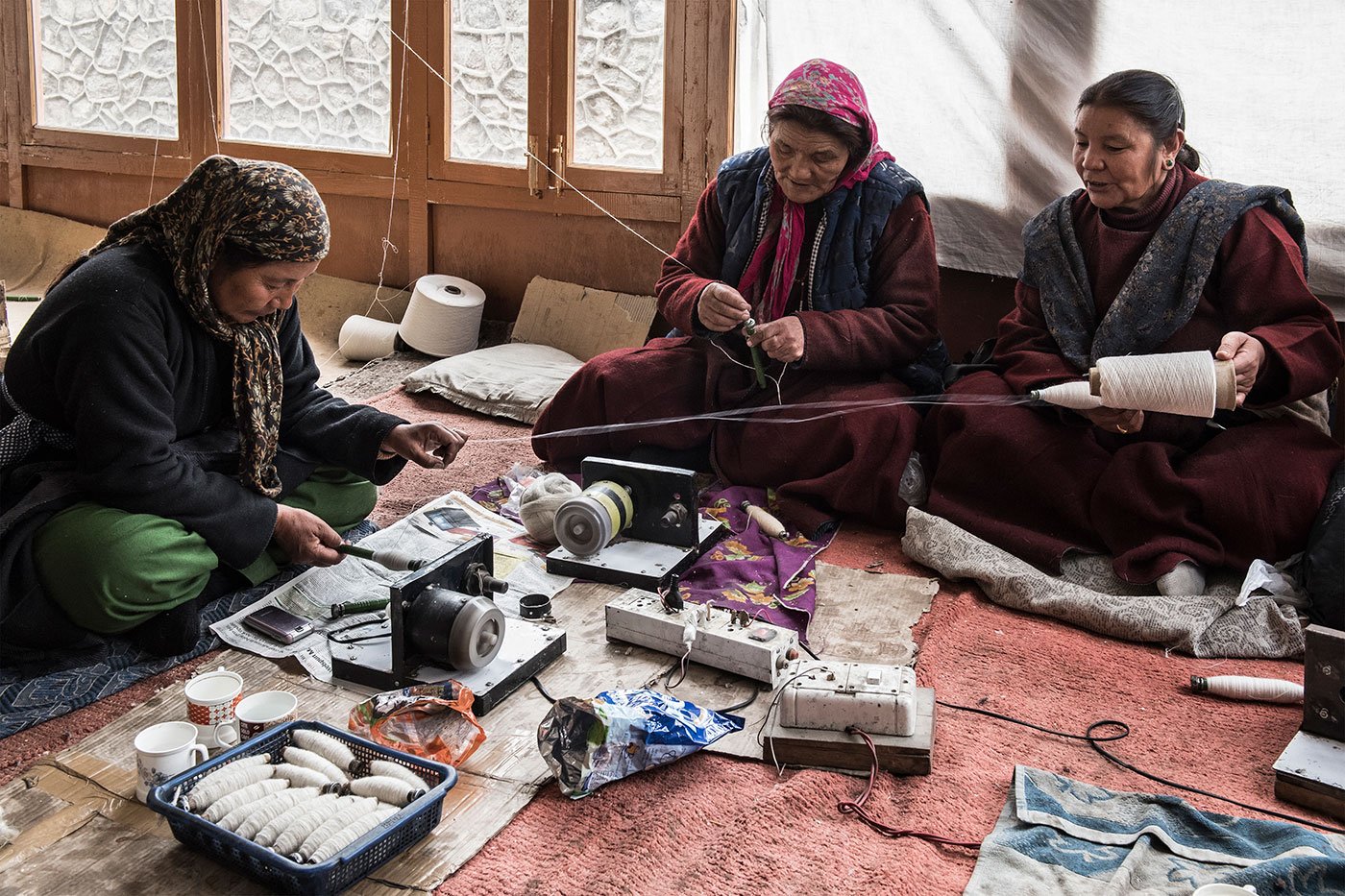 In some localities of Leh, groups of Ladakhi women (not from the Changpa community) have set up, or are employed in, small units where machines are used for spinning. This, they say, speeds up the process and increases profits 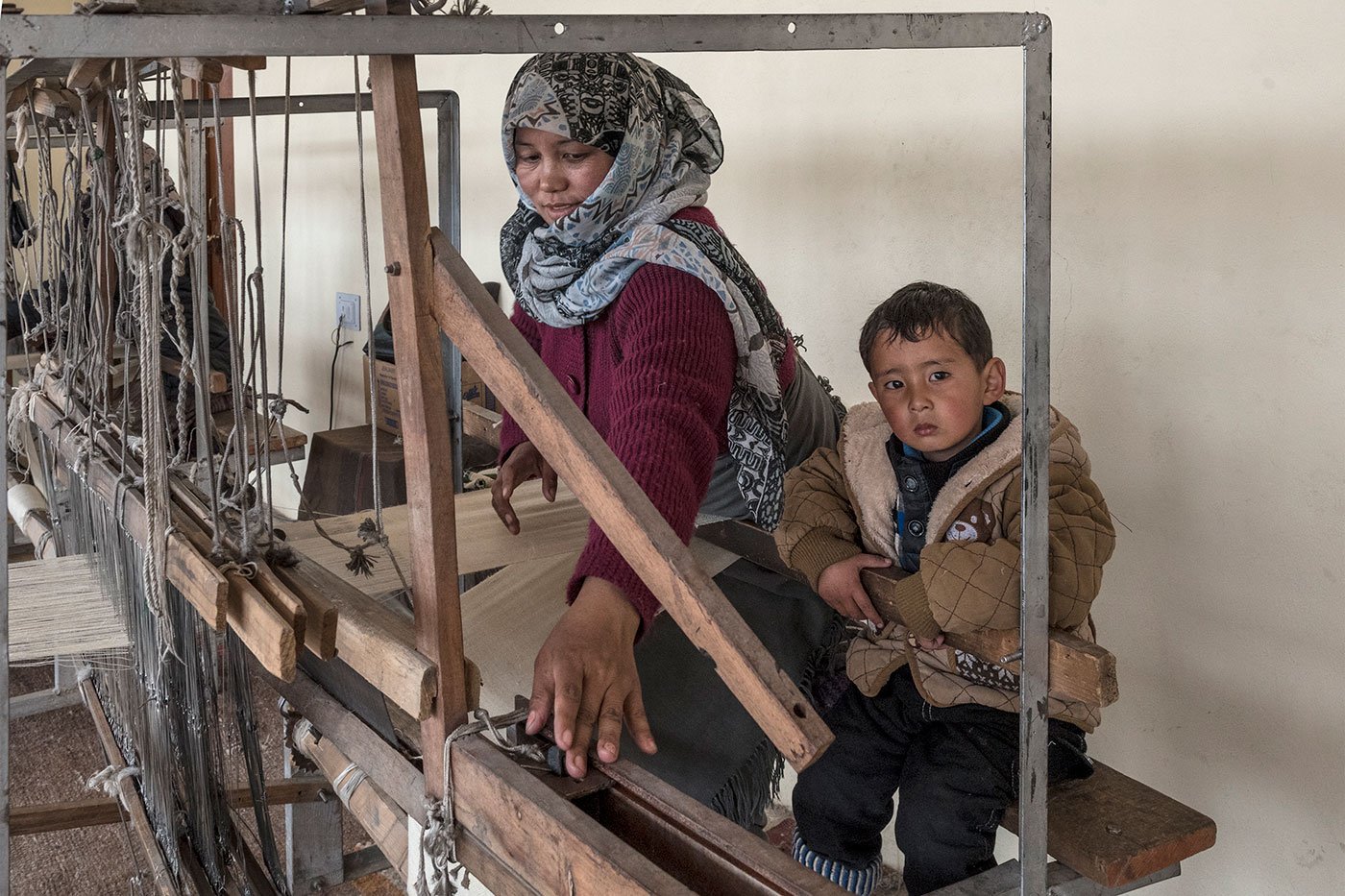 In Leh, Saima Dar says she prefers machine-weaving because it is quicker and allows her time for childcare. Her husband works in a hotel in Srinagar. 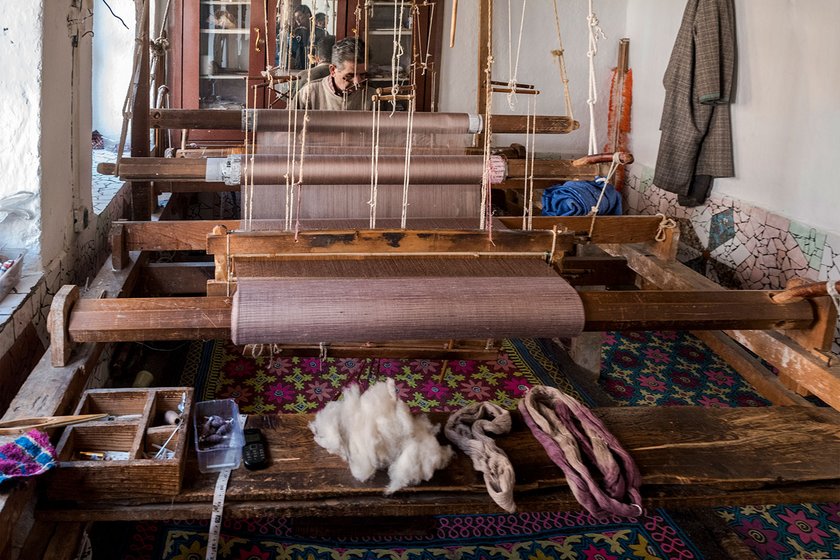 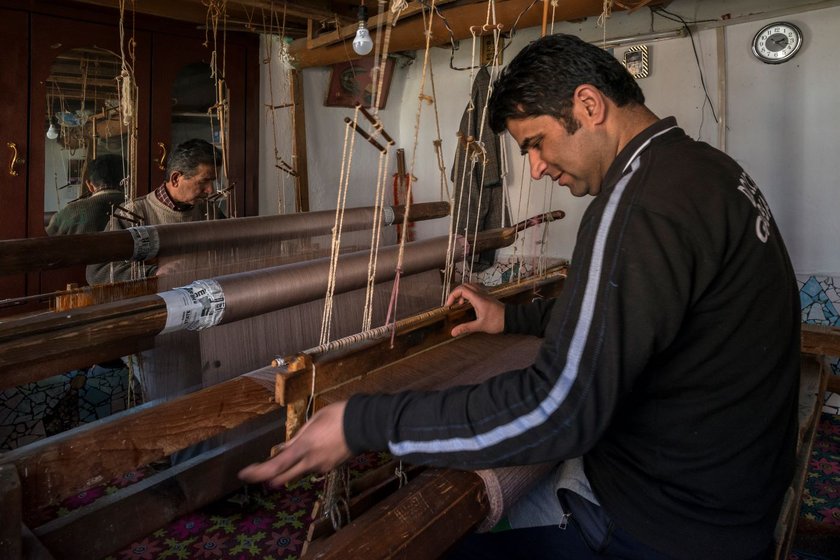 Mohammed Sidiq Kotha and his son Irshad Ahmed Kotha have been hand-weaving pashmina shawls on the loom for decades. They say that the speed of machine-woven shawls is hard to compete with. 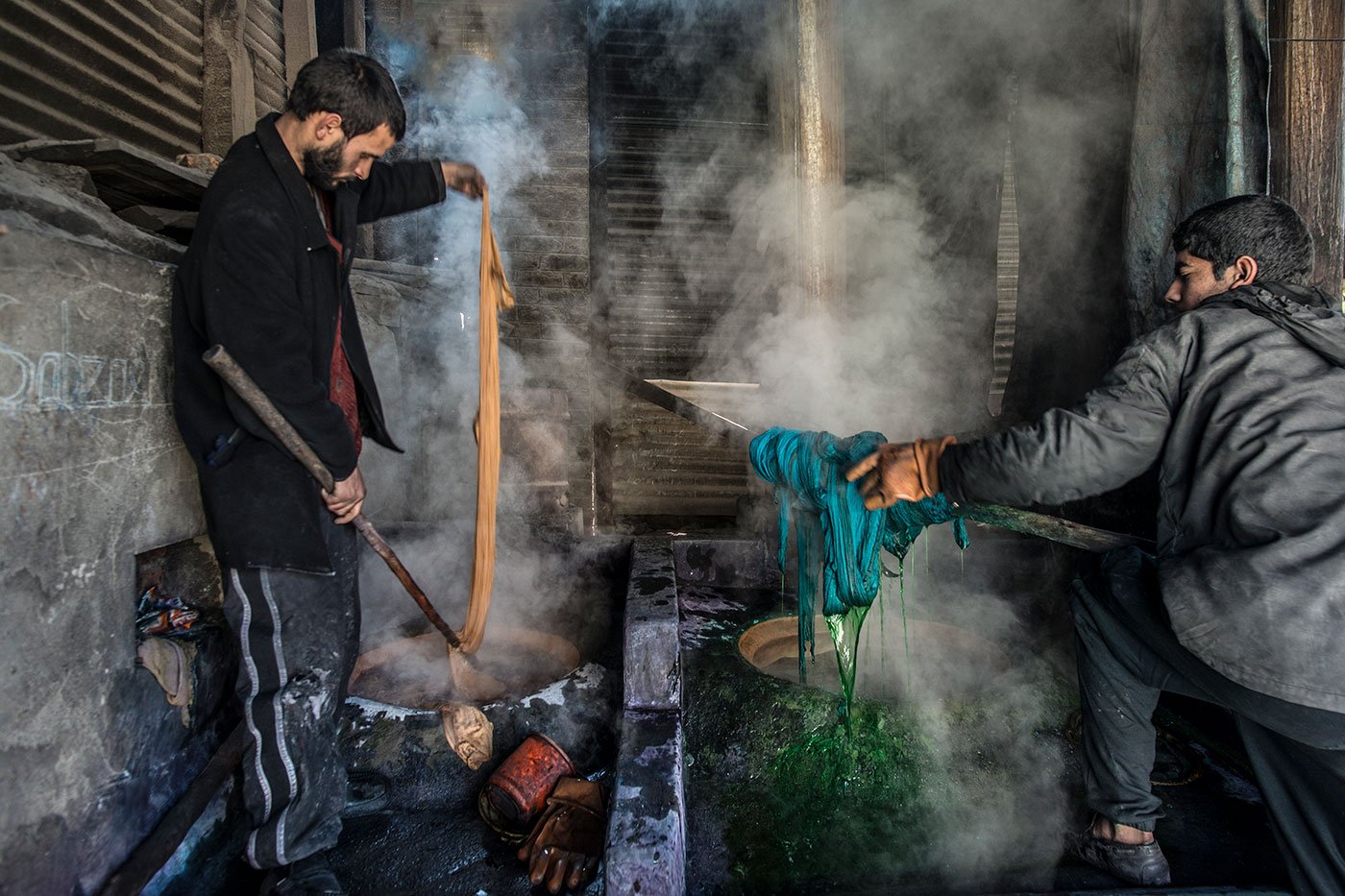 Sabzar Ahmed and Zubair Wani are traditional dyers in a workshop in the Nawhatta area of Srinagar. Their work involves being exposed to chemical fumes, but their employers rarely provide them with protective gear. 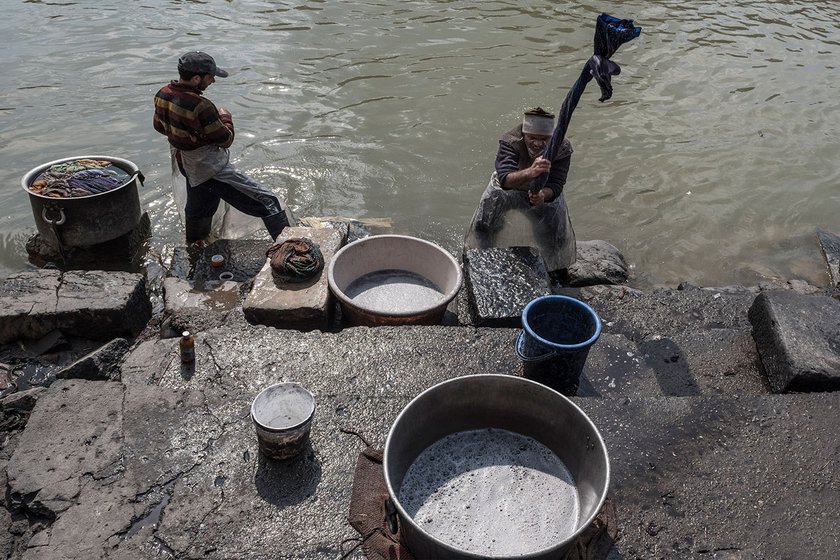 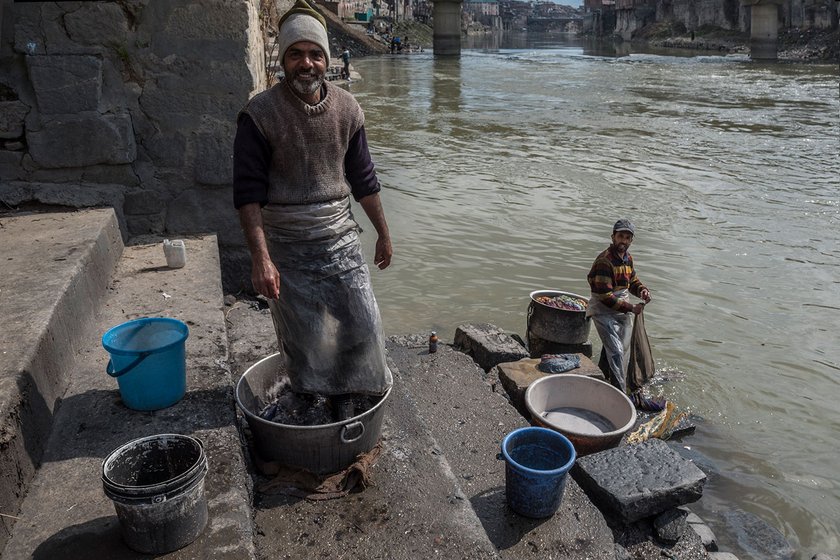 Once ready, the pashmina shawls are washed on the banks of the Jhelum in several areas of Old Srinagar. 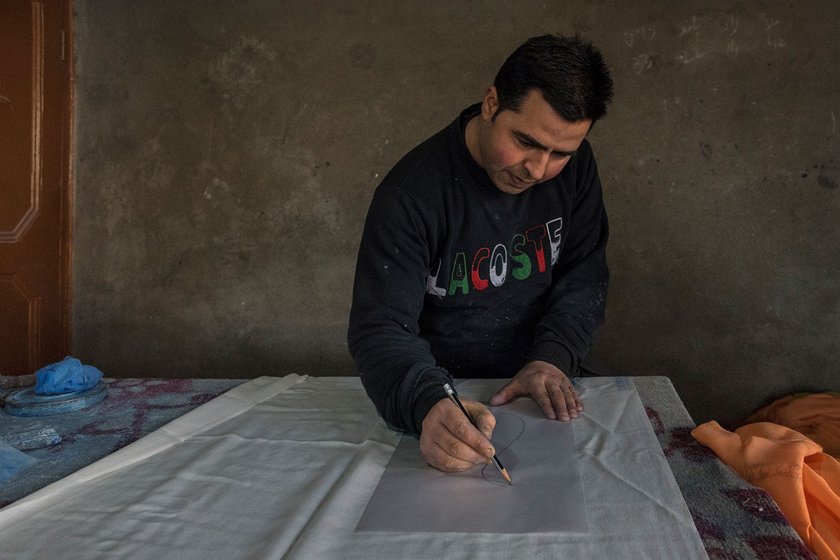 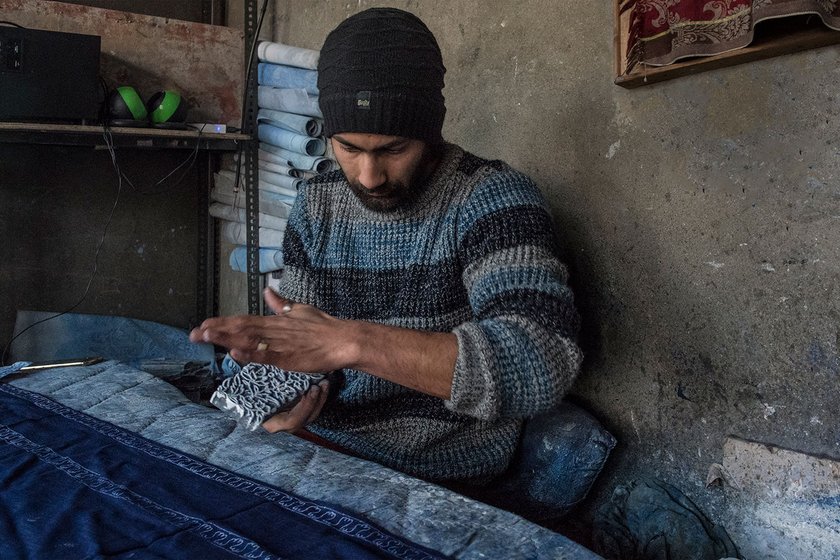 Left: Shabir Butt, now in his mid-30s, learnt to make designs on pashmina shawls from his father, and has been in the trade since he was 15. Though the drawings are now computerised in many places, he prefers to continue drawing by hand. Right: Hand-carved wooden blocks are used to make borders on pashmina shawls, and artisans like Bilal Maqsood in Old Srinagar take pride in transforming a plain cloth into an attractive shawl. 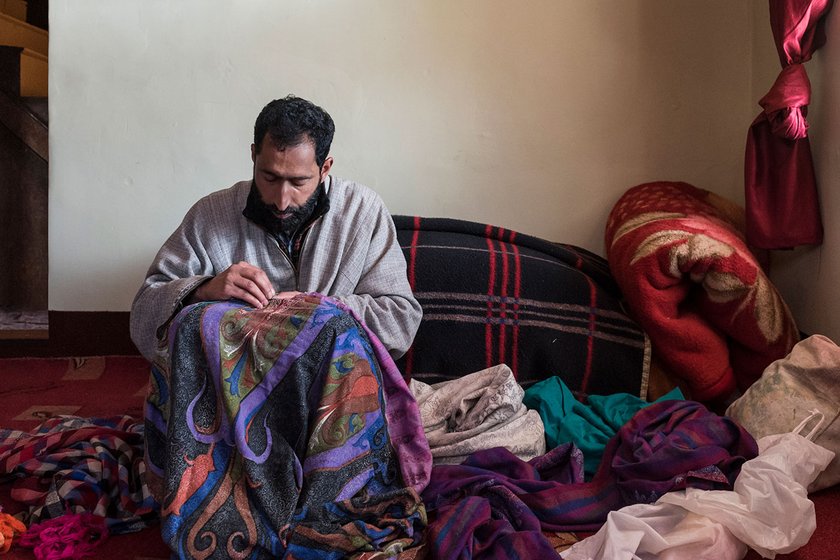 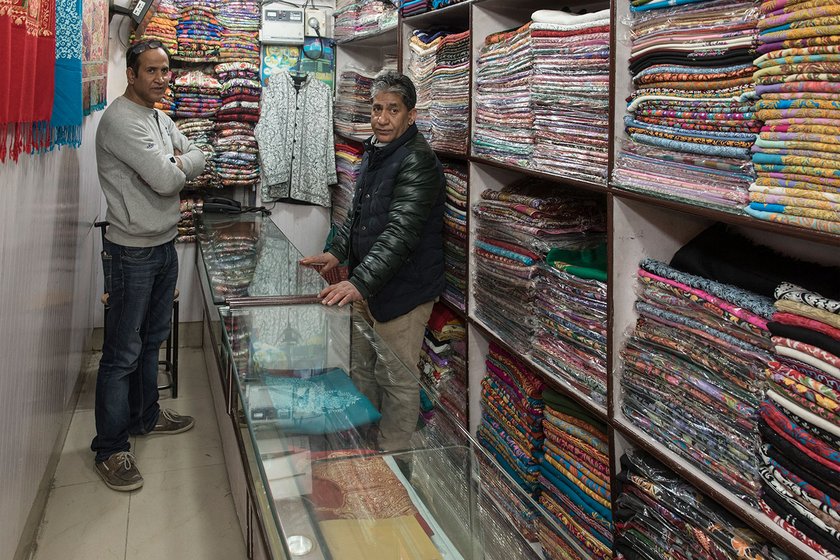 Left: Nazir Ahmed, a master artisan, embroidering a pashmina shawl with his sui-dhaga  in Ganderbal.  A shawl fully covered with designs can take even up to 6-8 months, while a plain one with an ornate border might take a month at most. Right: Niaz Ahmed, the owner of a pashmina shawls shop in Lal Chowk, Srinagar,  has been in pashmina trade for decades and says he has seen good times when the demand of pashmina was good as were his profits. Mashqoor Sheikh, now 44 has been in family’ pashmina business since his teens, and shifted from weaving to wholesale to try and earn more.