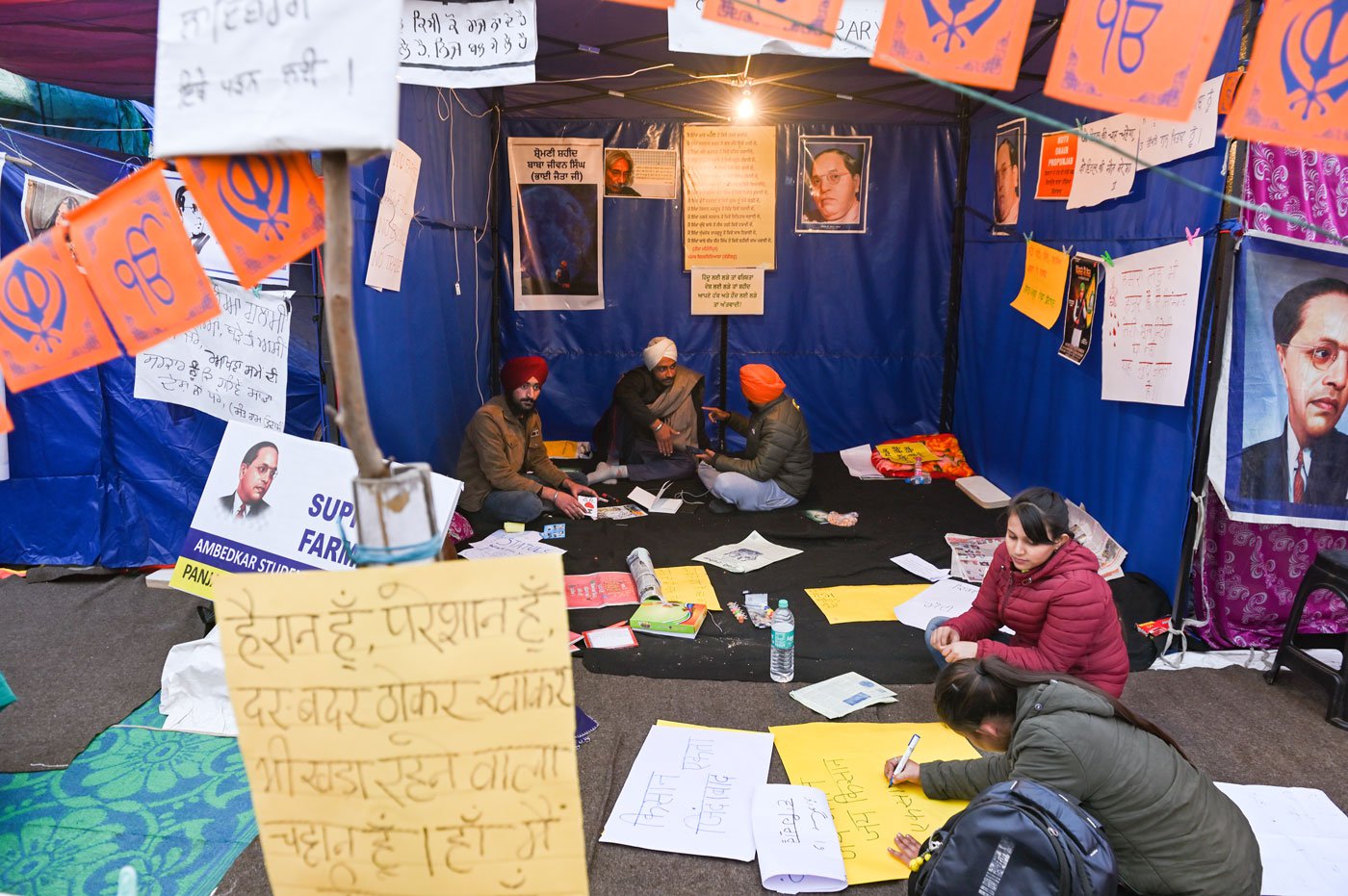 The many-splendoured sewa network at Singhu

From a 'turban langar' to tailors, trucks fitted with charging ports and mirrors, free laundry, massages, shoe-repairs – a very wide range of non-farmers are at Singhu too, offering solidarity through such services

“I don't own farmland, nor did my ancestors,” says Kamaljit Kaur. “But still, I am here to help our farmers in my small way, because I fear that if I don't, I will have to counter corporate greed to put something on my kids' plates.”

Kamaljit, 35, is a teacher from Ludhiana city in Punjab, and along with a few friends she is running two sewing machines in a shaded space at Singhu. They come to the protest site in turns, three days at a time, and fix for free missing shirt-buttons or tears in salwar-kameez outfits of the protesting farmers. Around 200 people turn up every day at their stall.

At Singhu, such sewa is available in many-hued and very generous forms – all as offerings of solidarity with the protests.

Among those serving are Irshad (full name unavailable). In a narrow nook outside the TDI mall in the Kundli industrial area, some four kilometres from the Singhu border, he is vigorously massaging the bare head of a Sikh protestor. Many others are awaiting their turn. Irshad is a barber from Kurukshetra, and says he has come here out of a sense of biradari – brotherhood.

Also on this route, sitting outside his mini-truck, Sardar Gurmik Singh has gathered around him many seeking a free massage to relax their aching muscles, after the long hours of travel in crammed trolleys from Punjab to Singhu. “They are going through so many other kinds of pain right now…” he says, about what brought him here to help.

For Surinder Kumar, a doctor from Chandigarh, sewa has taken on the form of running a medical camp at Singhu, along with other doctors. This is one of numerous medical camps at the protest site – some run by doctors who have come here from as far as Kolkata or Hyderabad. “We are trying to abide by the pledge we took while graduating – by tending to the aged exposed to this biting cold day after day, many staying on open roads,” says Surinder. 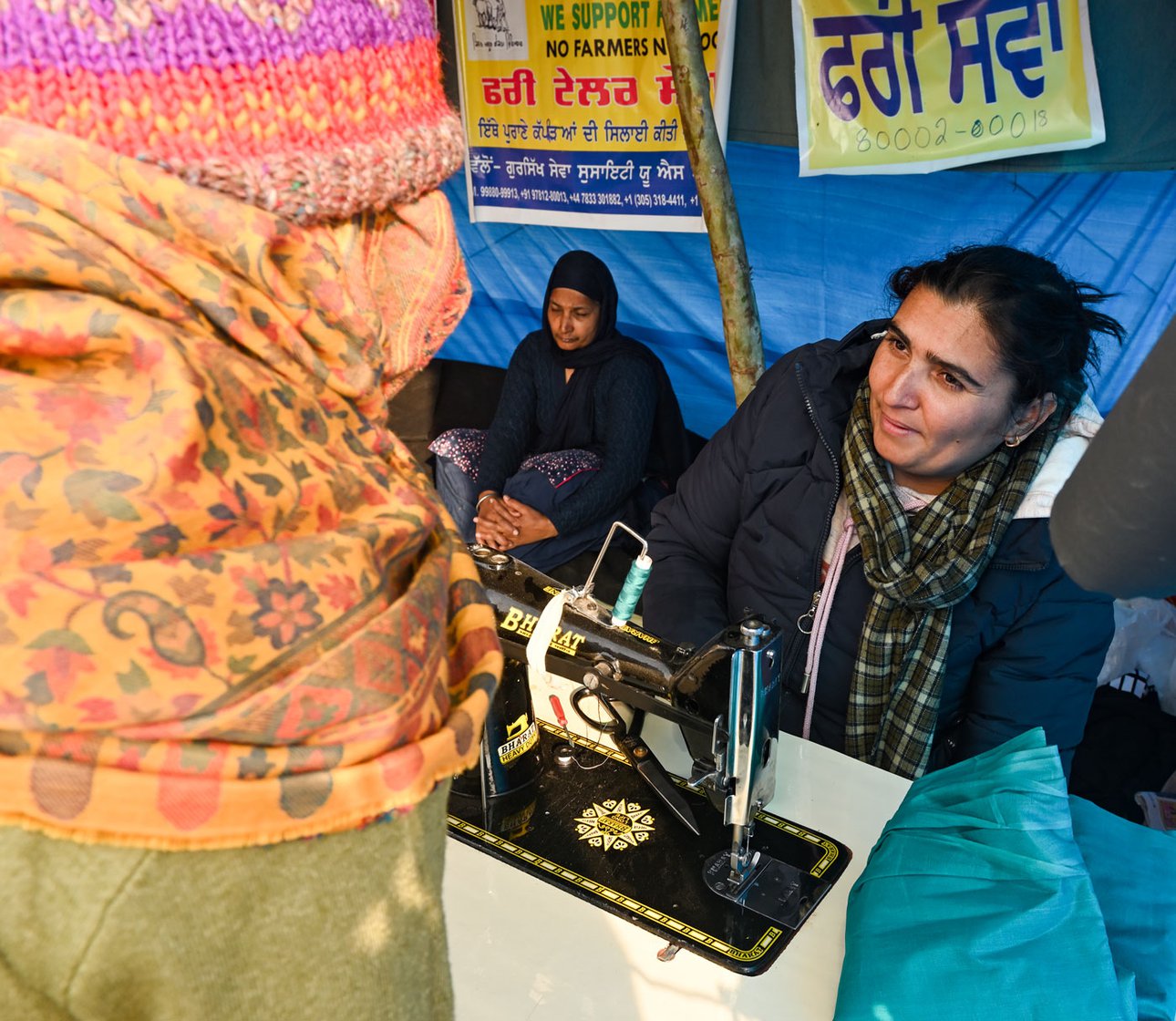 Kamaljit Kaur, a teacher from Ludhiana, and her colleagues have brought two sewing machines to Singhu, and fix for free missing shirt-buttons or tears in salwar-kameez outfits of the protesting farmers – as their form of solidarity

To help keep morale high, Satpal Singh and his friends from Ludhiana have transported to Singhu a massive sugarcane-crushing-machine mounted on an open truck. These machines are usually used in sugar mills – at the protest site, the crusher brought by Satpal churns out sweet fresh juice for all who pass by. They use a truck-full of cane every day, bought with donations collected in Aliwal, their village in Ludhiana district.

And on the lawns of the same mall in Kundli, Nihang Amandeep Singh from Bhatinda, while bathing a black stallion, says he is at Singhu to protect Punjab’s agrarian economy. Apart from serving food at a langer near the mall to anyone who comes by, Amandeep and others (all of them Nihangs, who belong to Sikh warrior order) engage in kirtans every evening, near the tents they have pitched in the shade of containers used by the Delhi Police as barricades.

Gurvej Singh from Amritsar, a student at Punjab University, along with other students, distributes a bi-weekly newsletter, Trolley Times, among the farmers camping at Singhu. They have enclosed a wide space with cloth and plastic sheets and placed paper and pens there for anyone to come in and write slogans for a poster – an exhibition of these posters is always on there, and they also run a free library. Members of the Ambedkar Students' Association from Punjab University also run a free library at Singhu, and they produce posters too ( see the cover photo on top ).

At nightfall, when we walk back to Kundli from the Singhu border, we stop many times to warm ourselves at fires around which sit various groups together.

We also visit Baba Gurpal Singh at his tent on that road and receive cups of tea that he always keeps ready. Baba Gurpal, 86, is a renunciate and granthi at Khanpur Gondiya Gurudwara near Patiala. He is a learned man, and gives us a history lesson on Sikh identity-based politics, and how this protest by farmers has crossed those limitations by becoming a pan-Indian movement for the greater common good.

I ask why Baba Gurpal why he, along with his elderly companions, is doing sewa at Singhu, serving tea to all for eight hours a day. Looking at the nightscape of collective smoke and fire, he replies, “It is time for all of us to come out and to do our part, as this has now become a direct conflict between Good and Evil. This is what happened in the epic war of Kurukshetra.” 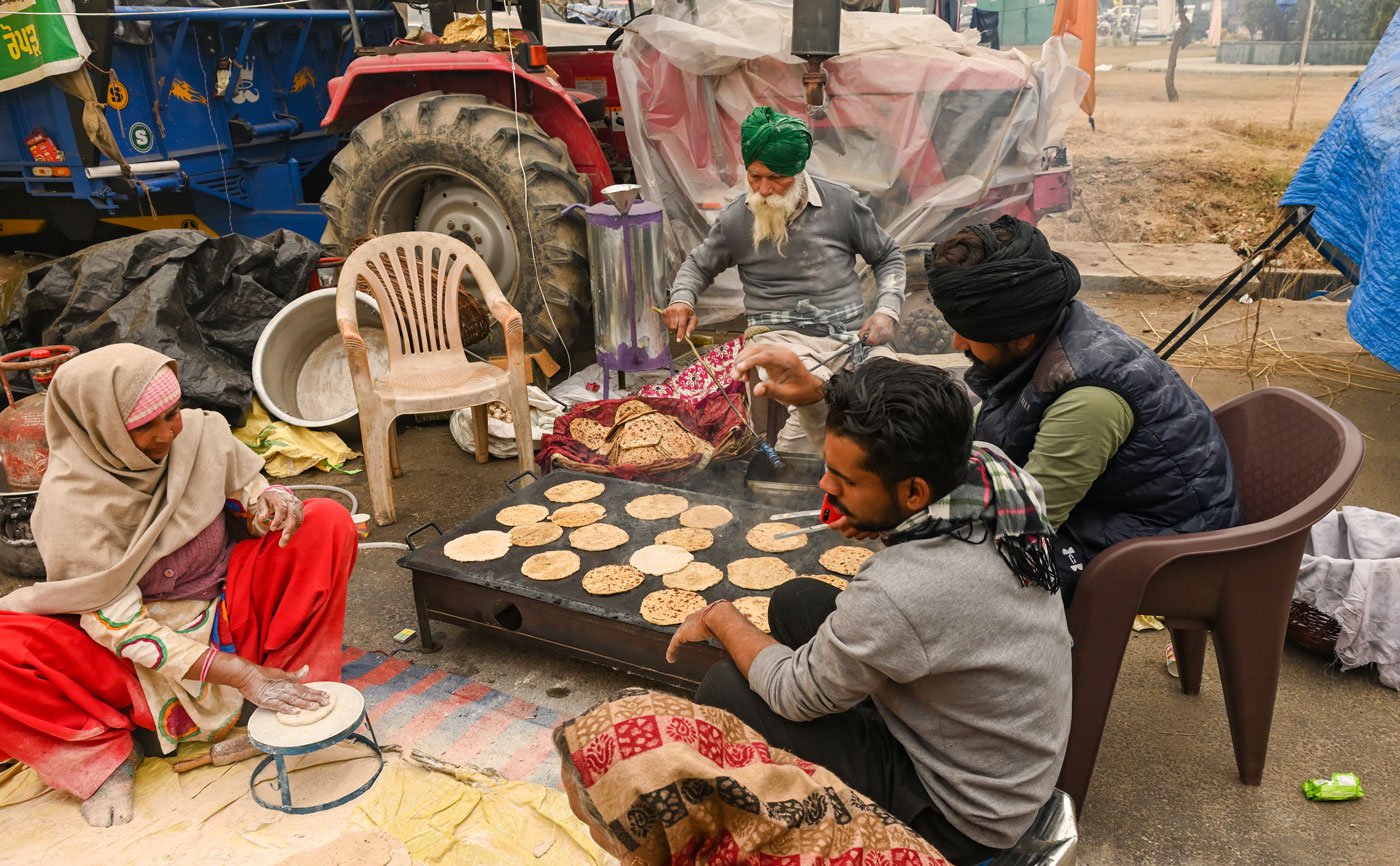 An elderly volunteer from Kurukshetra, spends the a major part of his day preparing methi parathas for anyone who comes by. While many of the langars at Singhu use automatic roti-making machines (some can produce 2,000 rotis in an hour) – he offers his sewa by turning into a paratha-making machine himself. 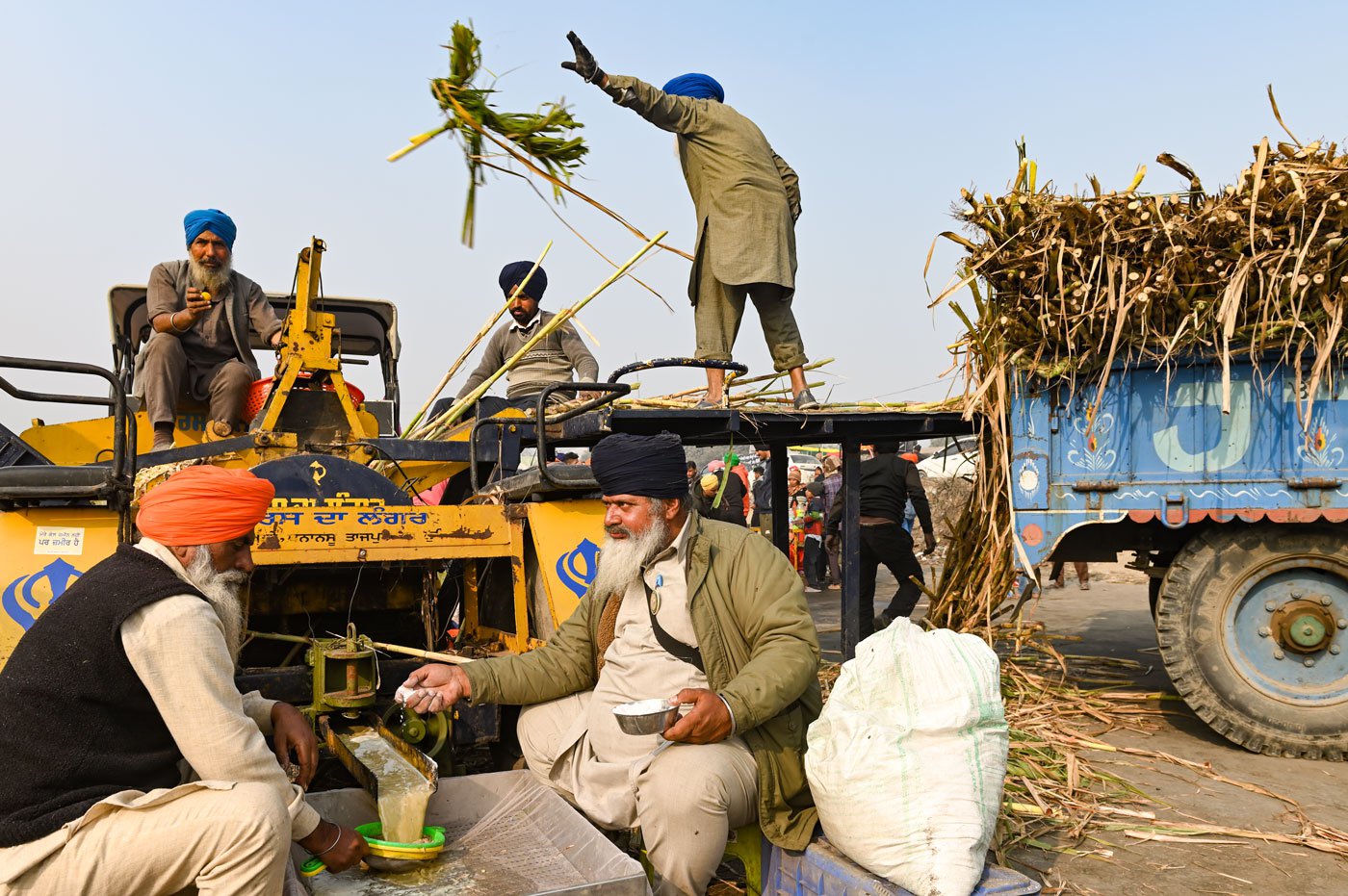 Satpal Singh (sitting, right, sprinkling salt into juice) and his friends from Ludhiana have transported to Singhu a massive sugarcane-crushing-machine mounted on an open truck. These machines are usually used in sugar mills – at the protest site, the crusher churns out sweet fresh juice for all who pass by. 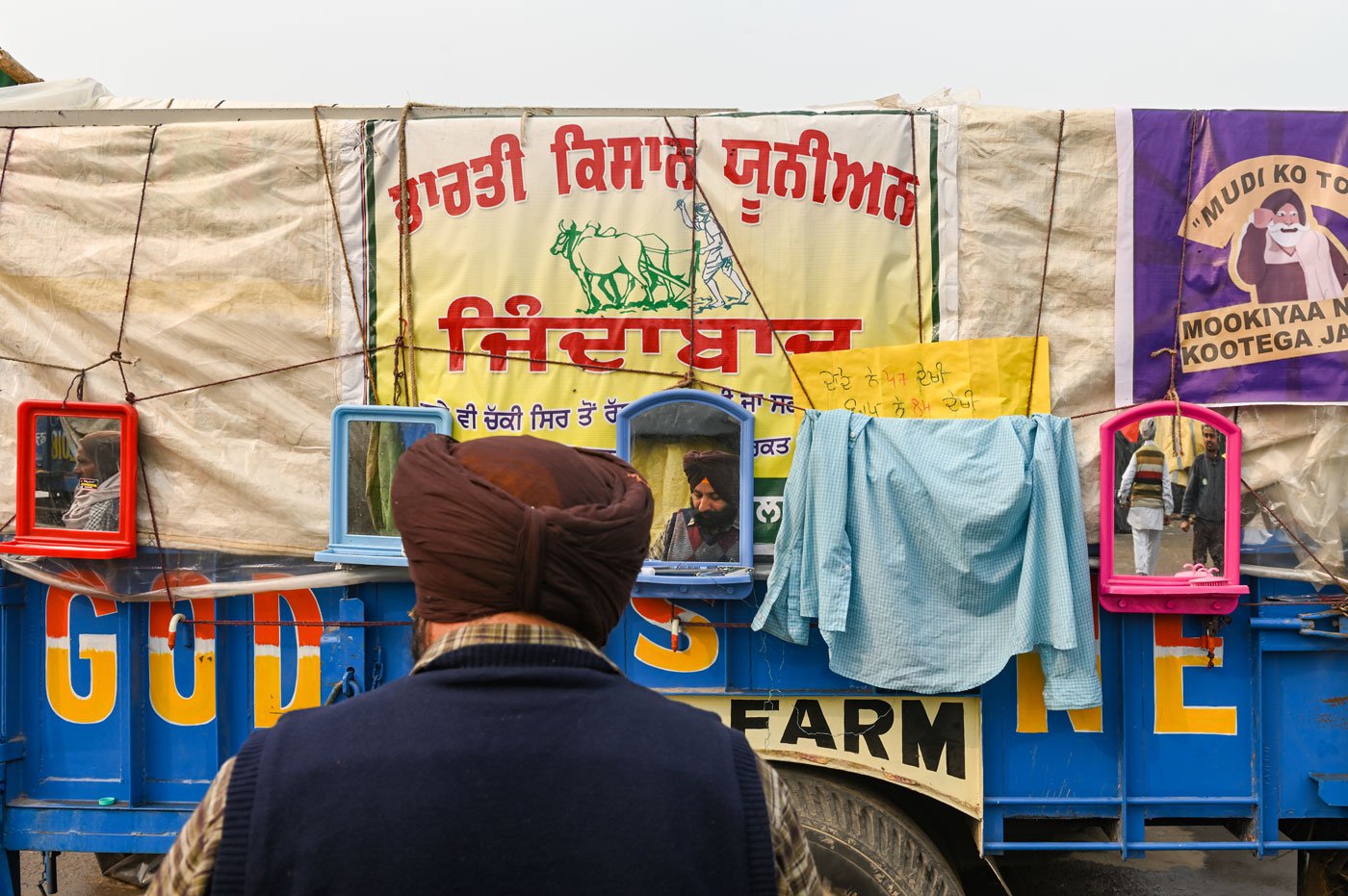 A row of mirrors attached to the side of a truck to help Sikh farmers tie their turbans, and for others to use too. From this truck items such as toothbrushes, toothpaste, soap and hand sanitisers are distributed all through the day. 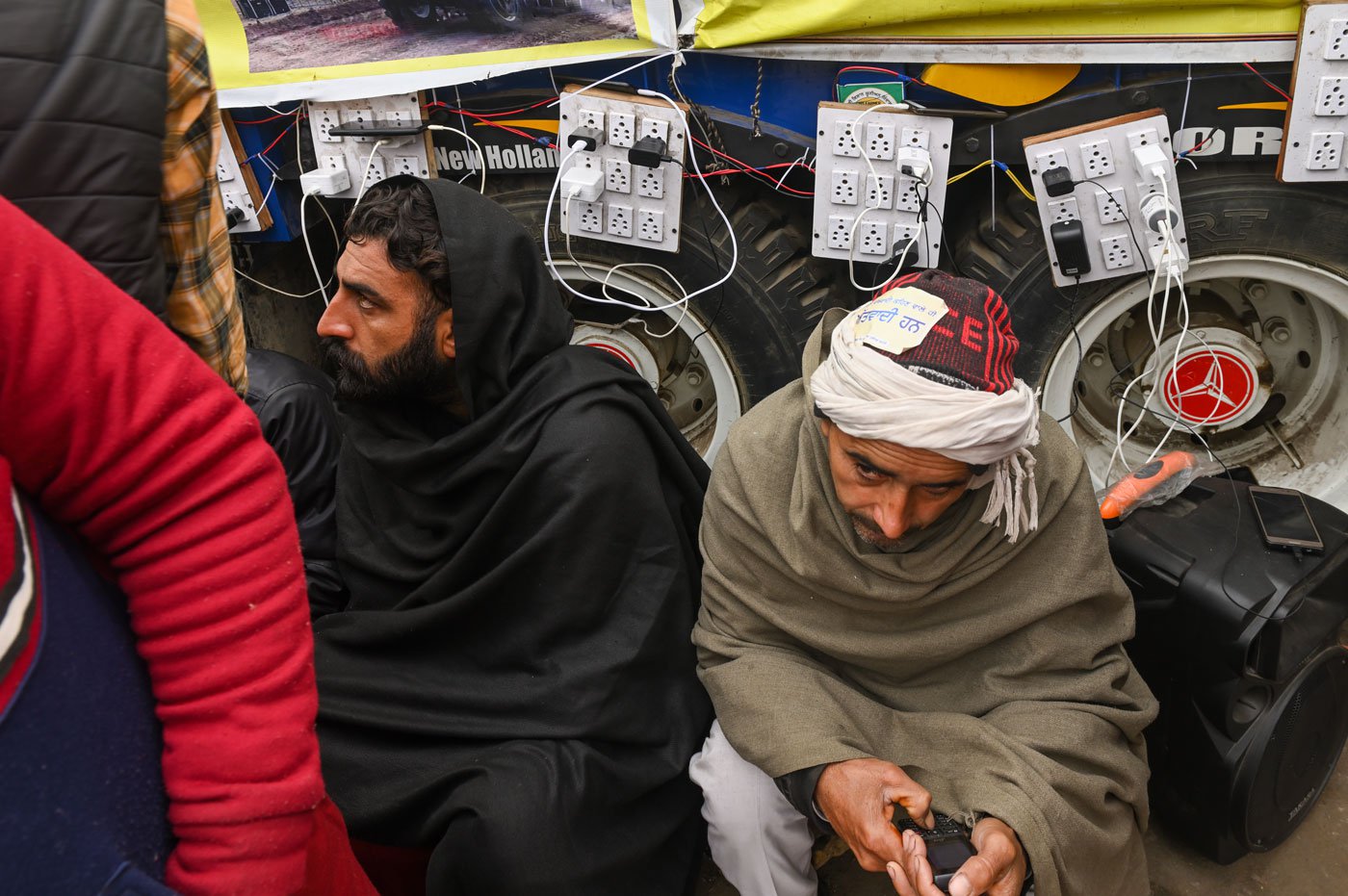 A village in Haryana has sent to Singhu a truck fitted with solar panels, which provide power to charging ports hung from the truck's side. The protesters get their phones charged at this truly mobile charger. 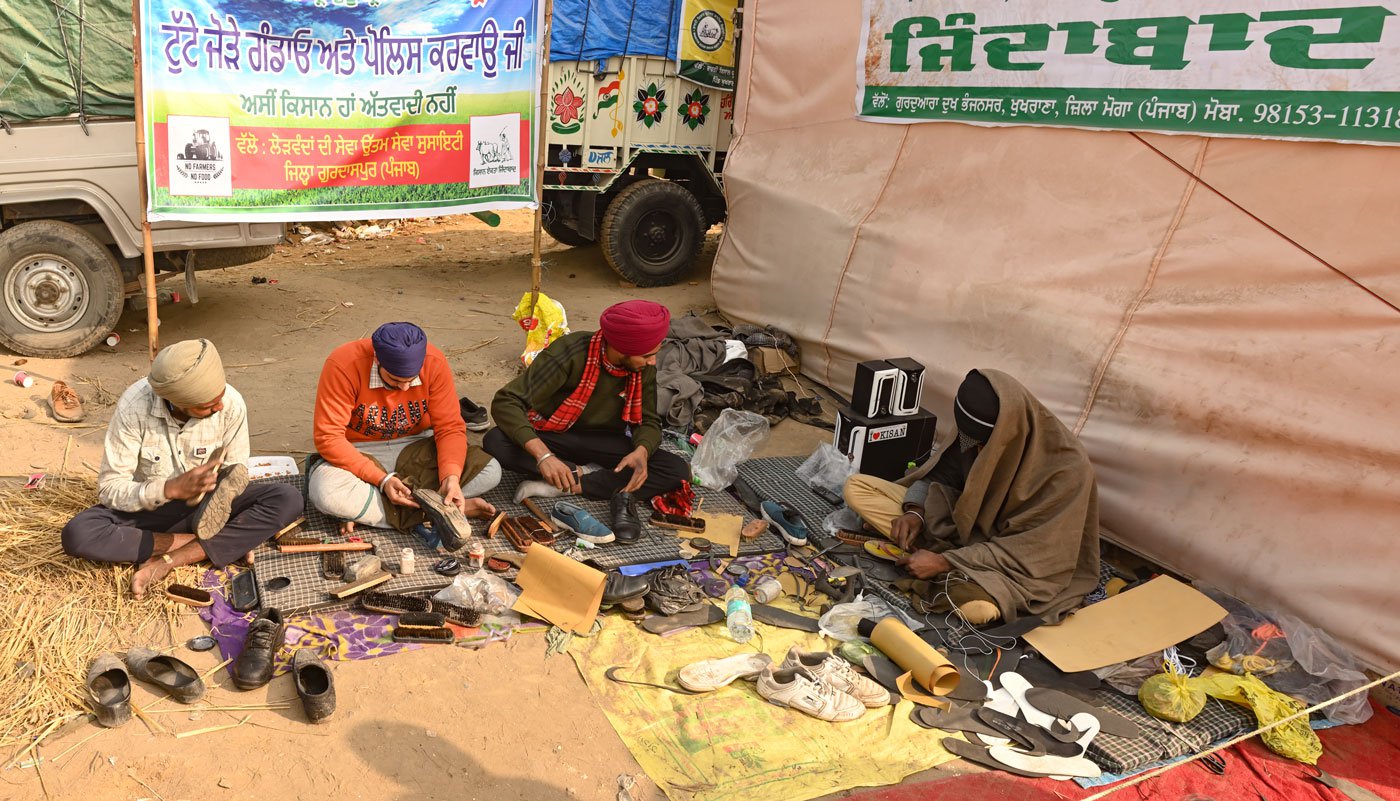 Young boys from Khukkrana village of Punjab's Moga district have hired a professional cobbler, and help him to mend the shoes of the protesting farmers. 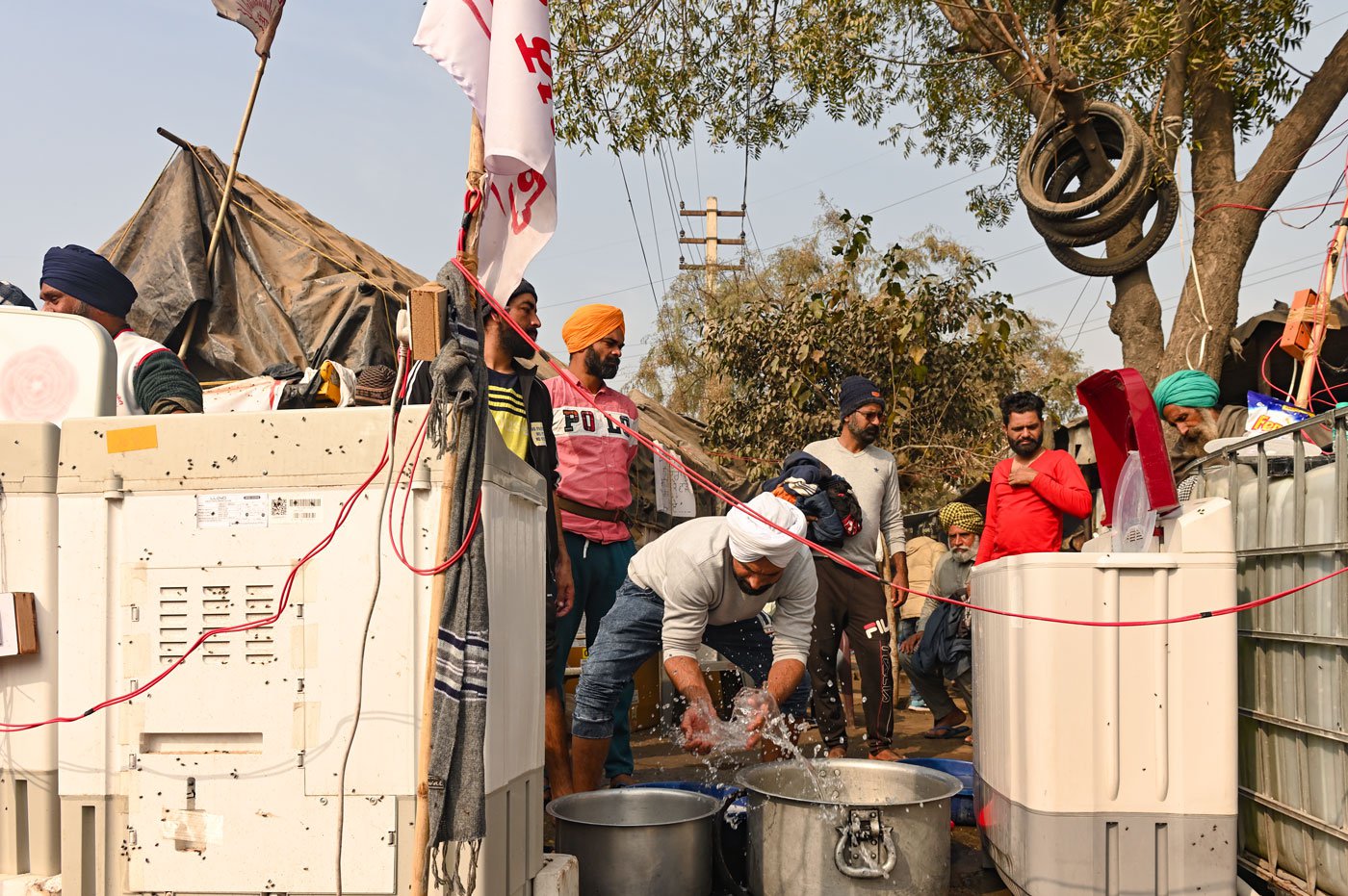 To ensure that clothes remain washed and clean even while camping for weeks on an open highway, many volunteers have started free laundry services. Half a dozen washing machines are placed in an enclosure, where anyone can come and request the volunteers to put their clothes through a wash. 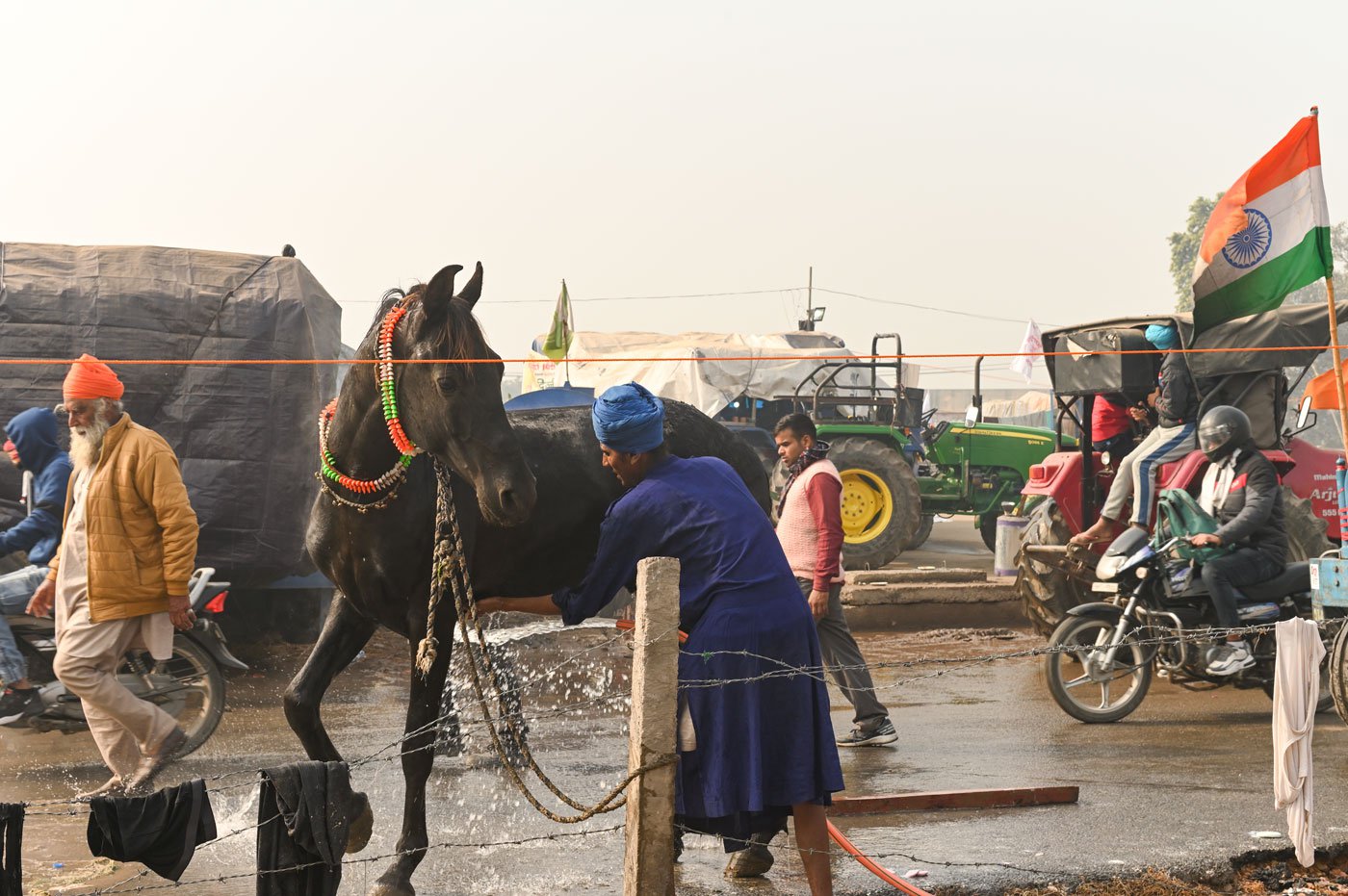 Amandeep Singh Nihang bathes his horse, to get ready for a kirtan that evening. Besides discourses and other religious activities, a group of Nihangs camped at Singhu distribute food from their langar to anyone who stops by. 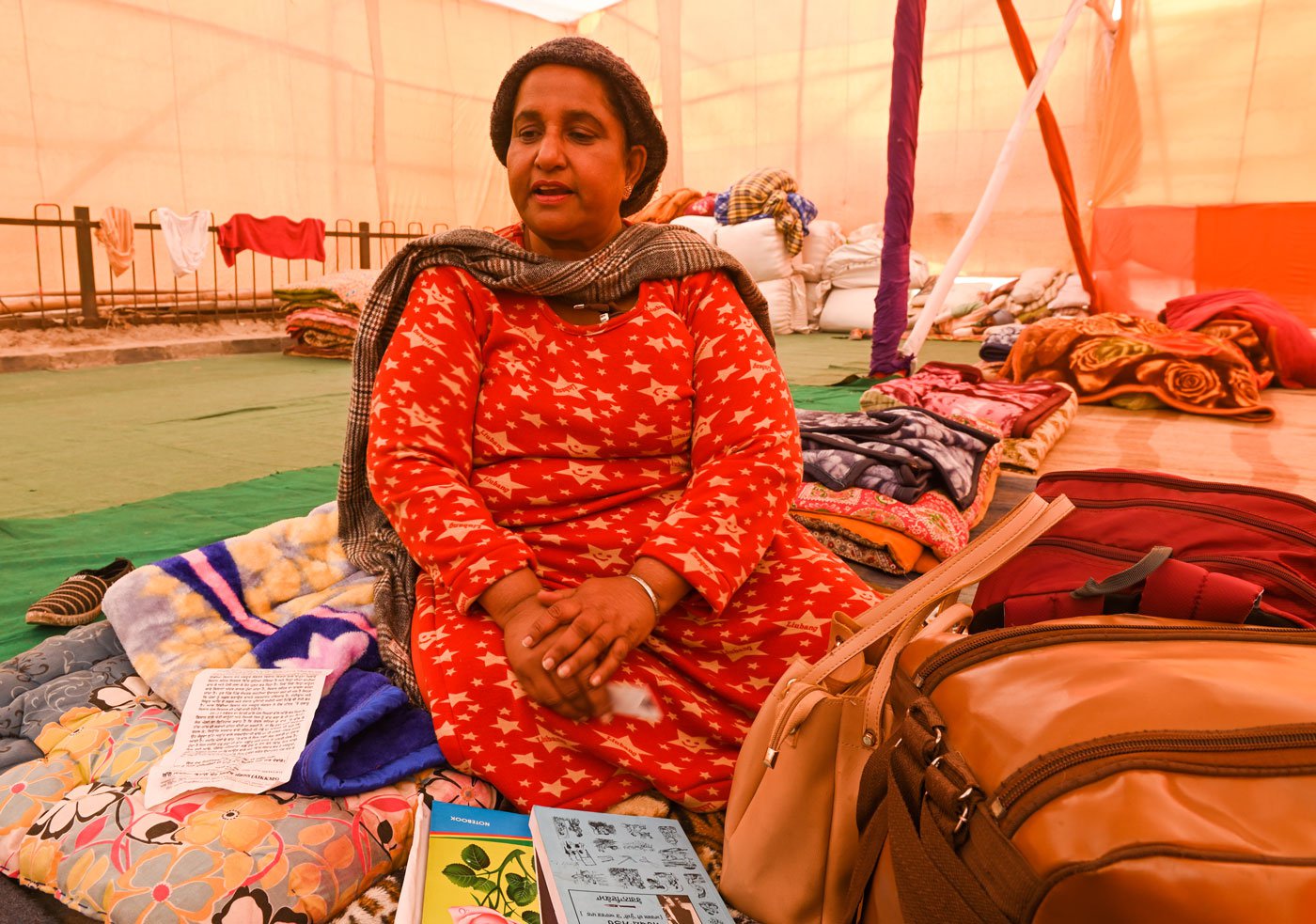 Baljinder Kaur, a teacher from Jalandhar, looks after a large enclosed space packed with innumerable mattresses, blankets, pillows; this has been arranged to provide shelter and comfort to protesters and supporters alike, who may choose to spend a night or two at Singhu. 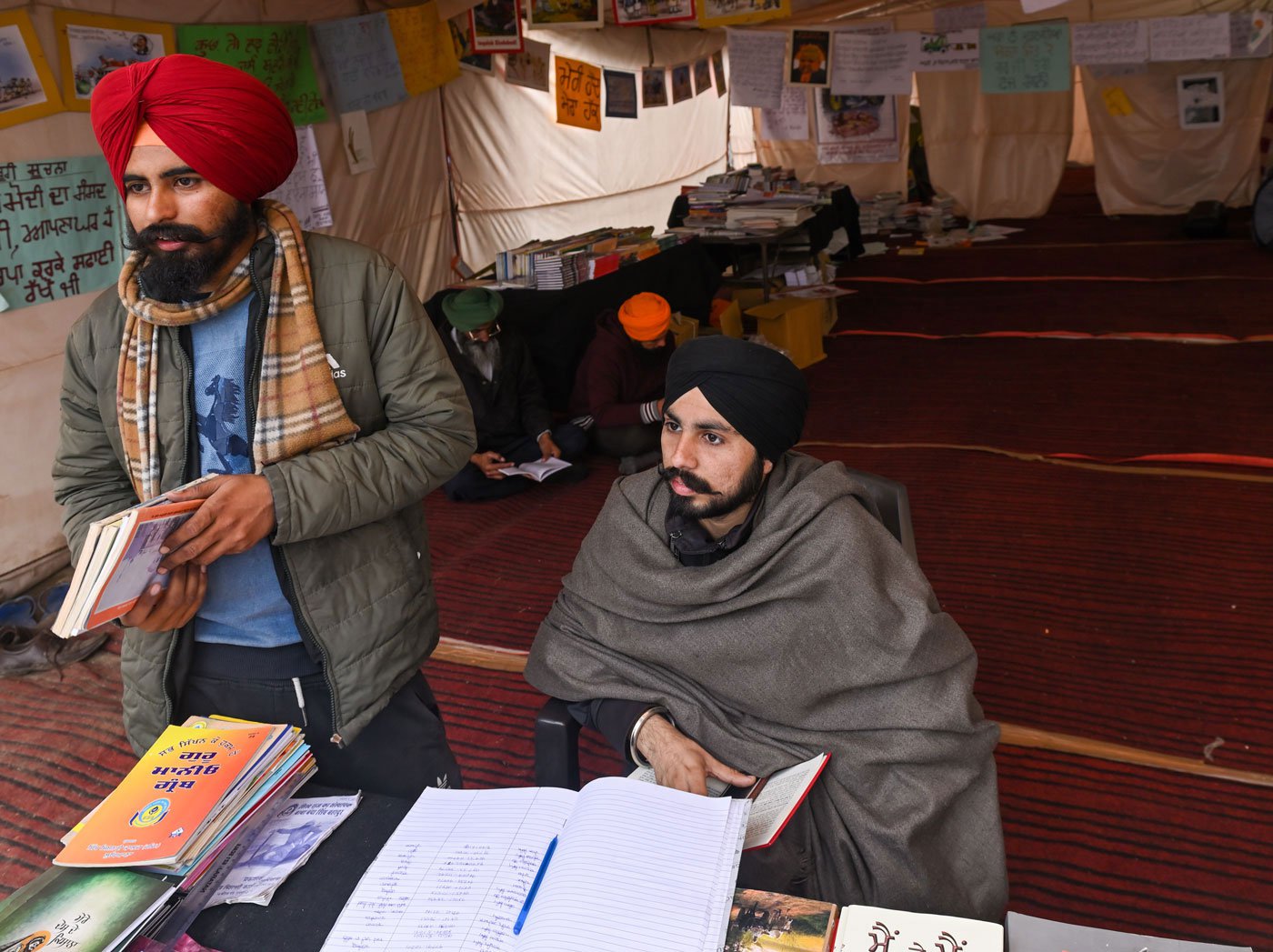 Members of the Friends of Bhagat Singh Society distribute a newsletter published for the protestors, Trolley Times . They also run a free library and an exhibition of posters, and arrange a discussion session every evening. 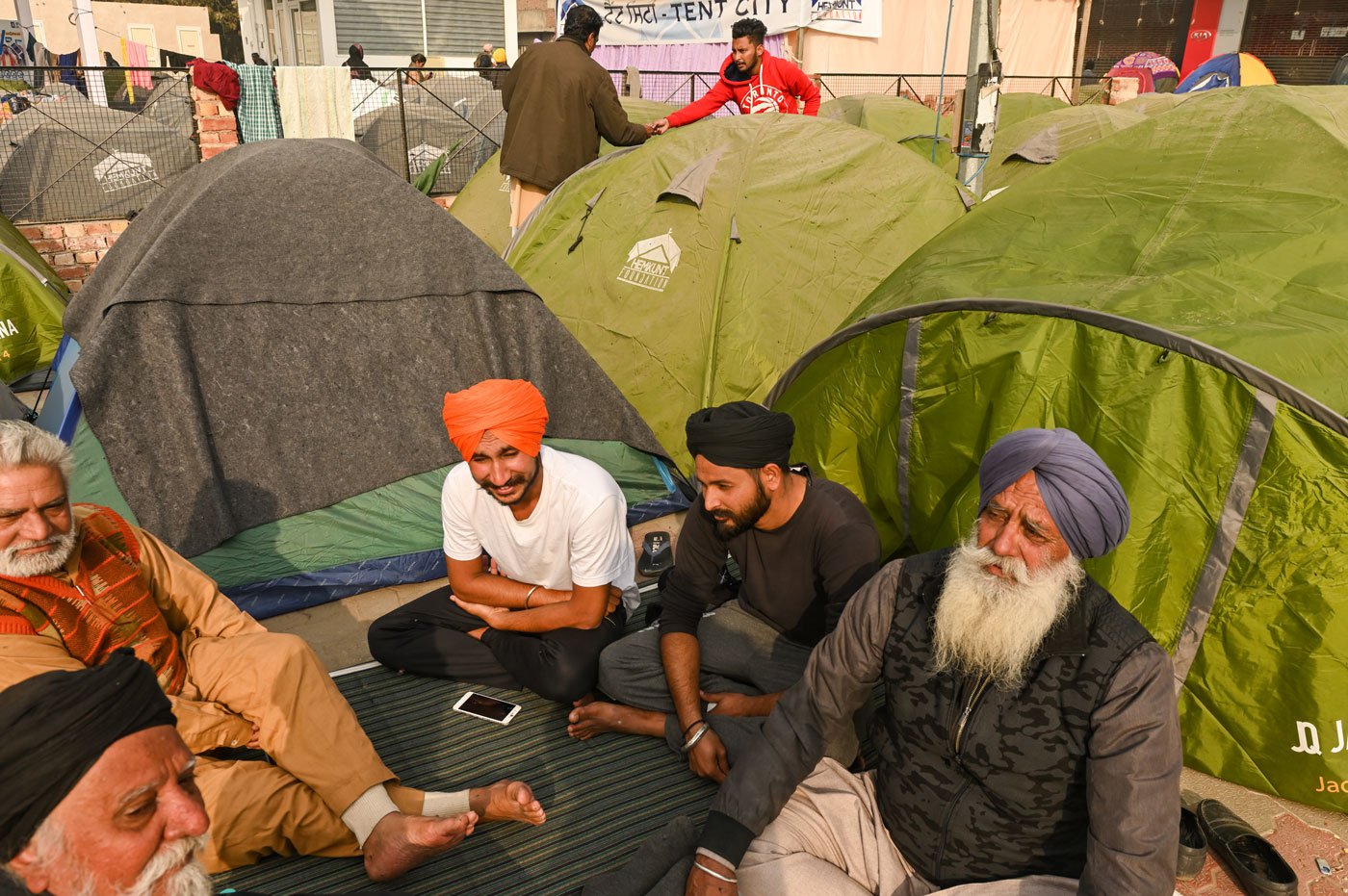 An NGO from Punjab has pitched a 100 hiking tents in the compound of a petrol pump at Singhu to accommodate protesters and to keep them warm on cold nights; they call it Tent City'. 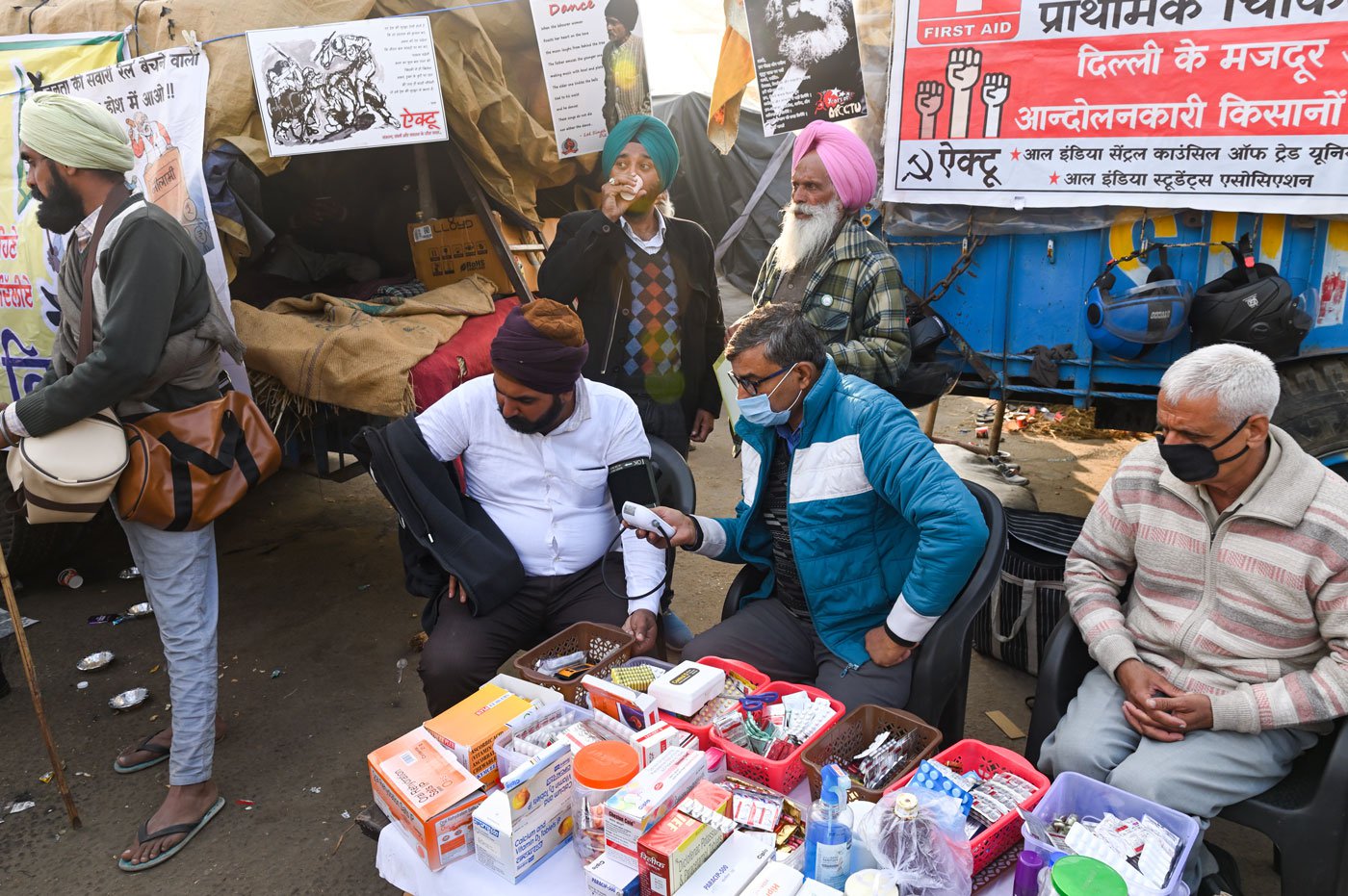 For Surinder Kumar, a doctor from Chandigarh, sewa has taken on the form of running a medical camp at Singhu, along with other doctors. This is one of numerous medical camps – some estimates say more than 30 – at the protest site. 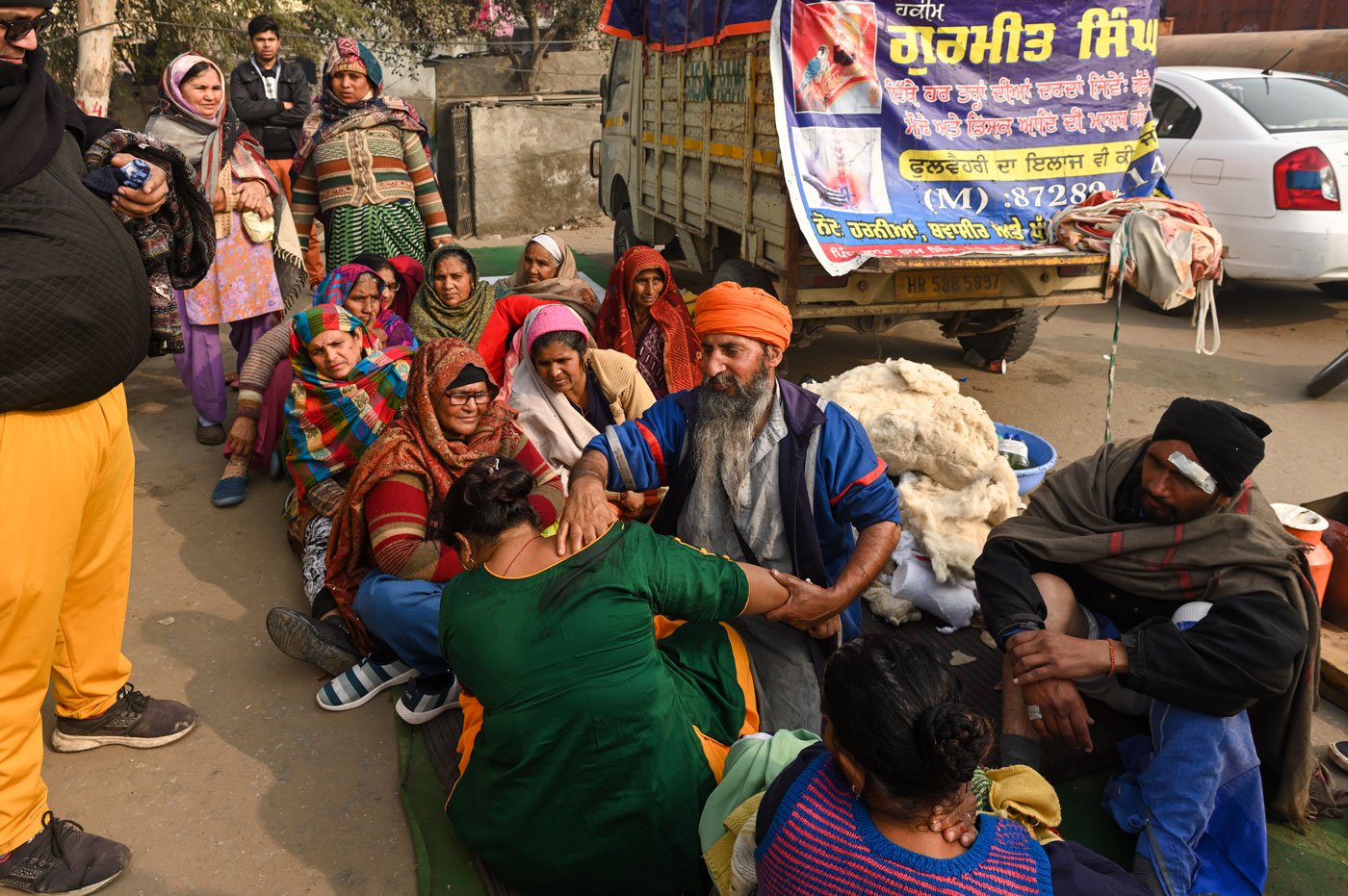 Sardar Gurmit Singh is a hakim , a self-taught setter of bones and fixer of pulled muscles is at Singhu too, offering massages to campers tired and aching after long journeys in cramped tractor trolleys. 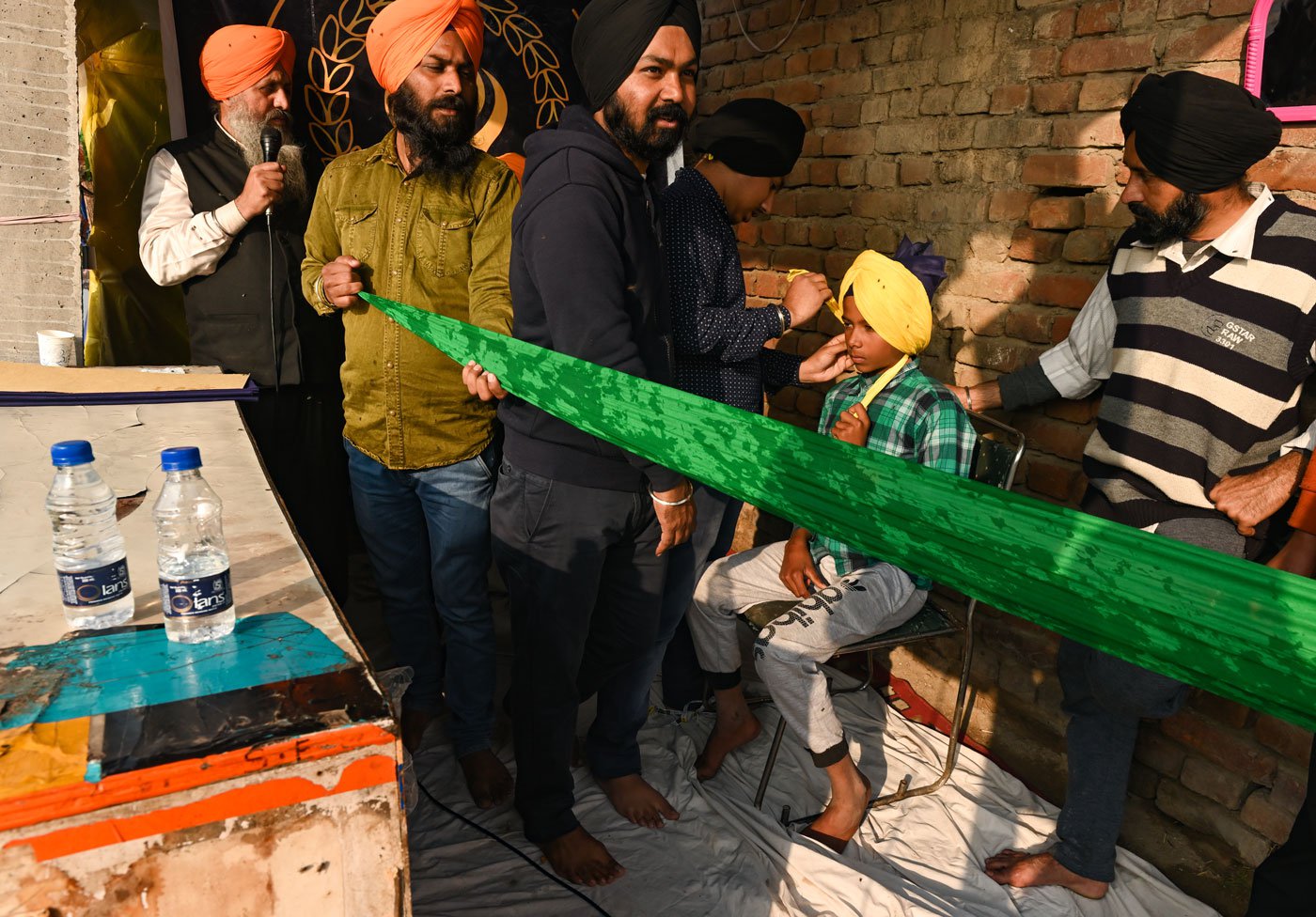 A ' turban langar ' at Singhu, where a turban-user can get a fresh turban tied around his head. Non-turban users also visit this spot and get turbaned to express their solidarity. 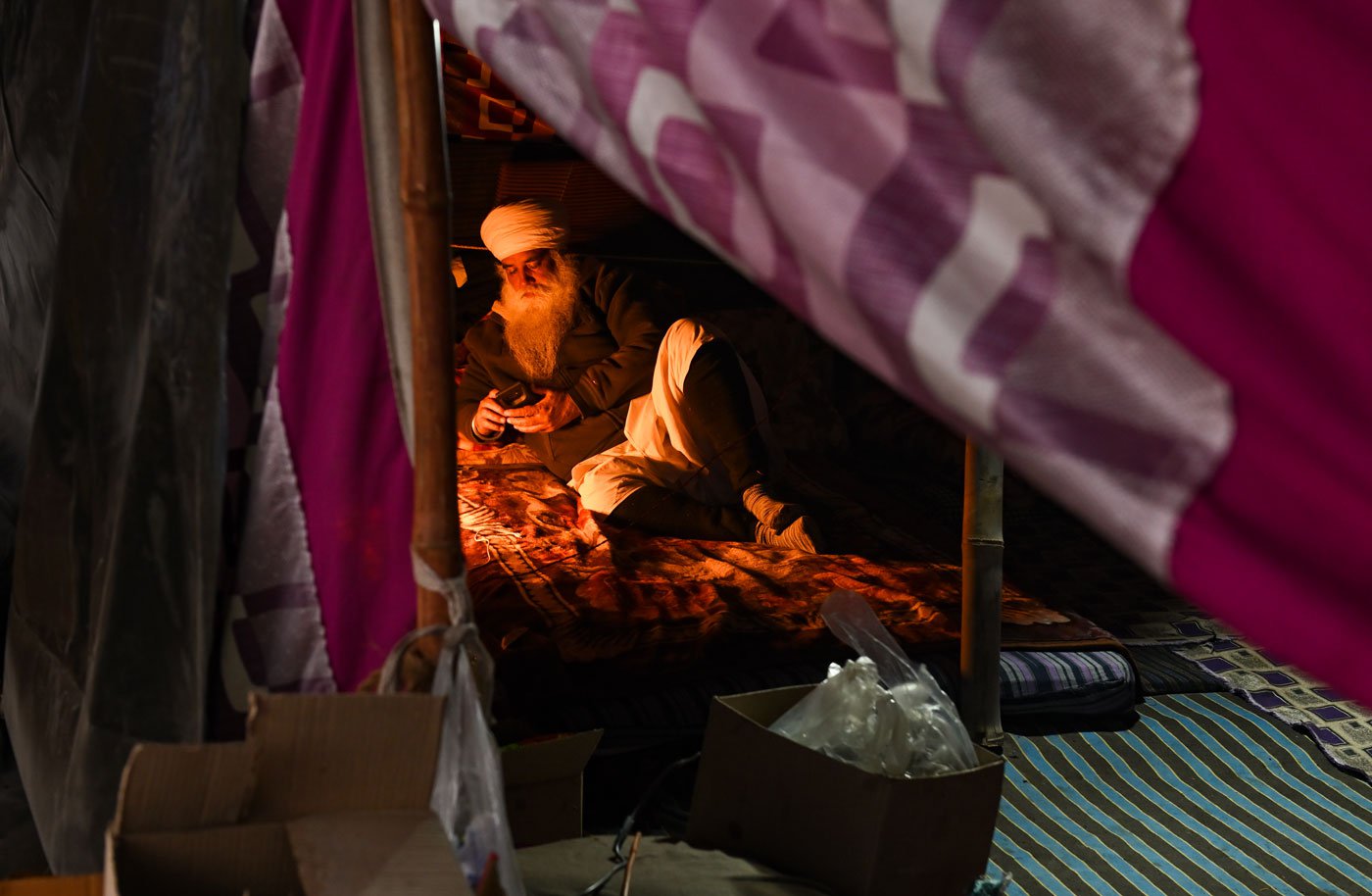 Baba Gurpal Singh, 86, is a granthi a t Khanpur Gondiya Gurudwara near Patiala. He is a learned man, and gives us a history lesson on Sikh identity-based politics, and how this protest by farmers has crossed those limitations by becoming a pan-Indian movement for the greater common good. 'It is time for all of us to come out and to do our part, as this has now become a direct conflict between Good and Evil', he says.