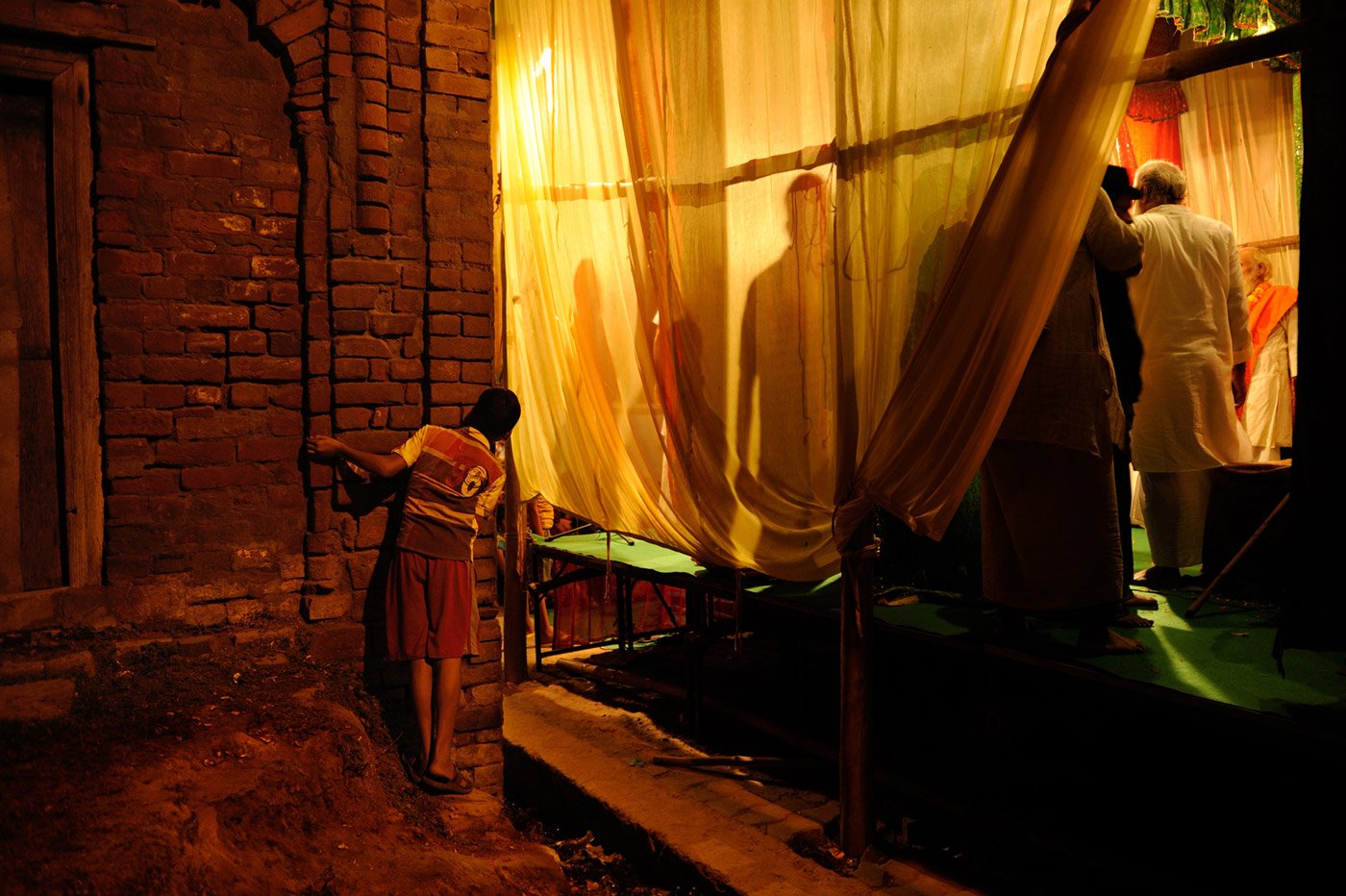 Performing Ramkatha in a changed Ayodhya

During the Dussehra month, the ragtag Ramkatha Singing Party dashes off from stage to stage, before returning to their day jobs, even as the retelling of the epic is engulfed by contemporary politics

Shastriji holds on to his long tail, made of straw wrapped around a bamboo pole, as he gets into the rickshaw. With him are the 19 men of his troupe, all crammed into three autorickshaws, as they dash off from stage to stage in Ayodhya – everyone wearing full make-up and costume. They all know that this is the season to make some money. It is the month of Dussehra.

Vinayak Shastri plays the role of Hanuman. He is also the director-manager of the Ramkatha Singing Party, which he started in 2002. When not on stage, 60-year-old Shastri teaches at a primary school in Ayodhya. His family owns farmland on the outskirts of the city, and he uses his share of income from the land to run the Singing Party. During the month of Dussehra, his troupe performs on at least three stages in Ayodhya every evening, from 6 p.m. to around 2 a.m, each show lasing two to three hours. That’s their night job for these few weeks. In the winter months of January and February, they usually perform three times a week. The rest of the year there are no performances.

Shastri collects Rs. 3,000 as advance per show from the local clubs or mohalla committees that book a show. Another Rs. 2,000-2,500 promised after the show rarely gets paid in full. The troupe members are paid Rs. 200-300 per night, depending on their seniority. Shastri uses some of the money to pay for the transportation, and for the costumes and props. All of these are packed and stored away in big metal trunks in a local dharamshala during the off-season.

The Ramkatha performers of Ayodhya occasionally sing and act in dusty and dilapidated auditoriums, but their real platform is makeshift stages in old mohallas – with a torn curtain, smudged landscapes as backdrops, and occasional wisps of smoke made from blown talcum powder.

The colour of the Ramkatha – tales and chapters from the Ramayana enacted and sung with vigour and pomp – has changed over time, just as Ayodhya too has changed. Vinayak Shastri knows that his performance is now part of a bigger politics. " Ram ka naam ab sab ka naam ban gaya ,” he says – Ram’s name has now become everyone’s call.

The youngest member of Shastri’s troupe is 12-year-old Akshay Pathak, who has played the role of Sita since he was 10. He studies in Class 7, but looks like he might be in Class 3. Noticing his slight stature, Shastri, who knows the boy’s father, a priest in Benipur village of Uttar Pradesh’s Faizabad tehsil , recruited Akshay. Shastri thinks that Sita has to be frail because she needs to descend below the earth – the finale of his troupe’s performances. 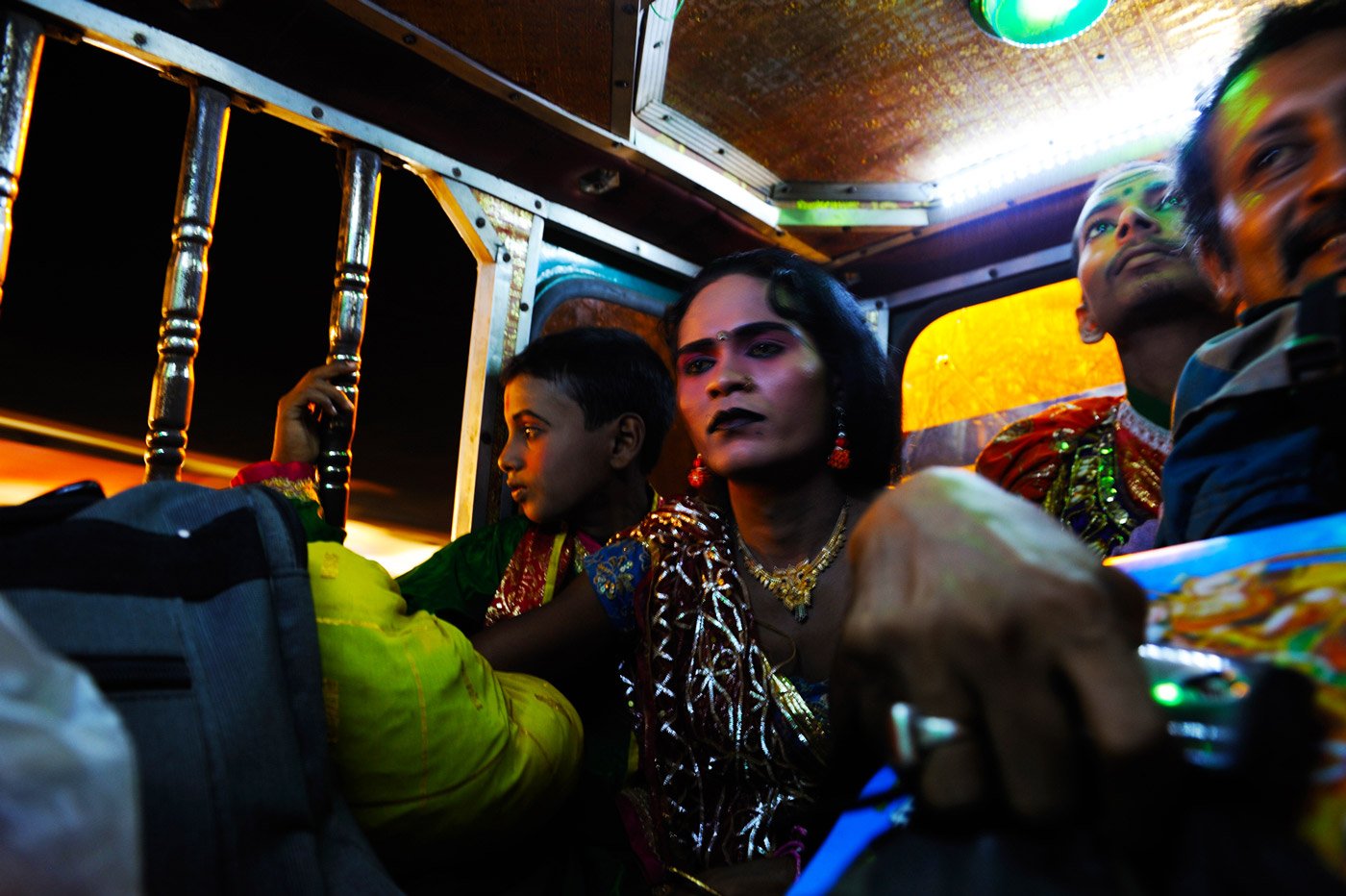 During Dussehra, the schedule is busy. Actors ply between stages in hired autorickshaws. They save time by remaining in costume even during the rides

A sharp-featured Vijay, who works as an electrician, plays Ram. Vijay is around 24, and has been with the troupe since 2013. He is from Ayodhya town. Suresh Chand, around 52 and also from Ayodhya, plays both Valmiki and Ravana. Some years ago, Suresh used to sell paan-beedi from a tiny enclosure just beside Ayodhya railway station; now the Ramkatha seems to be his only source of income.

Before the katha starts, two transgender persons – known to everyone only as Dolly and Bhatti – come on the stage and sing of the supremacy of Ram in high-pitched voices. The cymbal, dholak and flute players strike up a tune. Then the curtain goes up. Ram-Lakshman-Sita are sitting on a sofa against a backdrop of a river, a large moon and a blue deer.

Ganpat Trivedi, the 54-year old lead singer, sings the first hymns from the Valmiki Ramayana . He lives in an ashram in Varanasi and comes to Ayodhya every year during the Dussehra month to perform in Vinayak Shastri’s troupe. The rest of the year he earns a living by teaching boys in an orphanage how to sing hymns.

A diya kept on the stage draws the audience, sometimes 2,000 strong. Many take turns to come on the stage, pick up the lamp and move it in a circle around the epic trio, as a ritual aarti . Trivedi continues singing. Coins and notes offered before a performance mean a lot to the Ramkatha group, who are sometimes not paid in full by the organisers.

Then Ram, Sita and Lakshman take over the stage. Hanuman’s long strides fill the limited space. The air reverberates with Ravana’s impassioned dialogues.

And then a local leader comes on the stage along with his followers. He rotates the diya around a by-now tired Ram. His followers shout ‘ Jai Sri Ram, bolo Jai Sri Ram ’  and ‘ Dar ke nahi marenge, mandir vahi banayenge’ (‘We won’t die in fear, we will build the temple there’). Reasserting their intention to build a Ram temple at the long-disputed site in Ayodhya.

Ramkatha performers sing at night, under harsh lights tied to bamboo poles. This harshness speaks of the present time. At the other end of the road – on Naya Ghat near the Sarayu river – a huge bamboo effigy of Ravana awaits immolation. 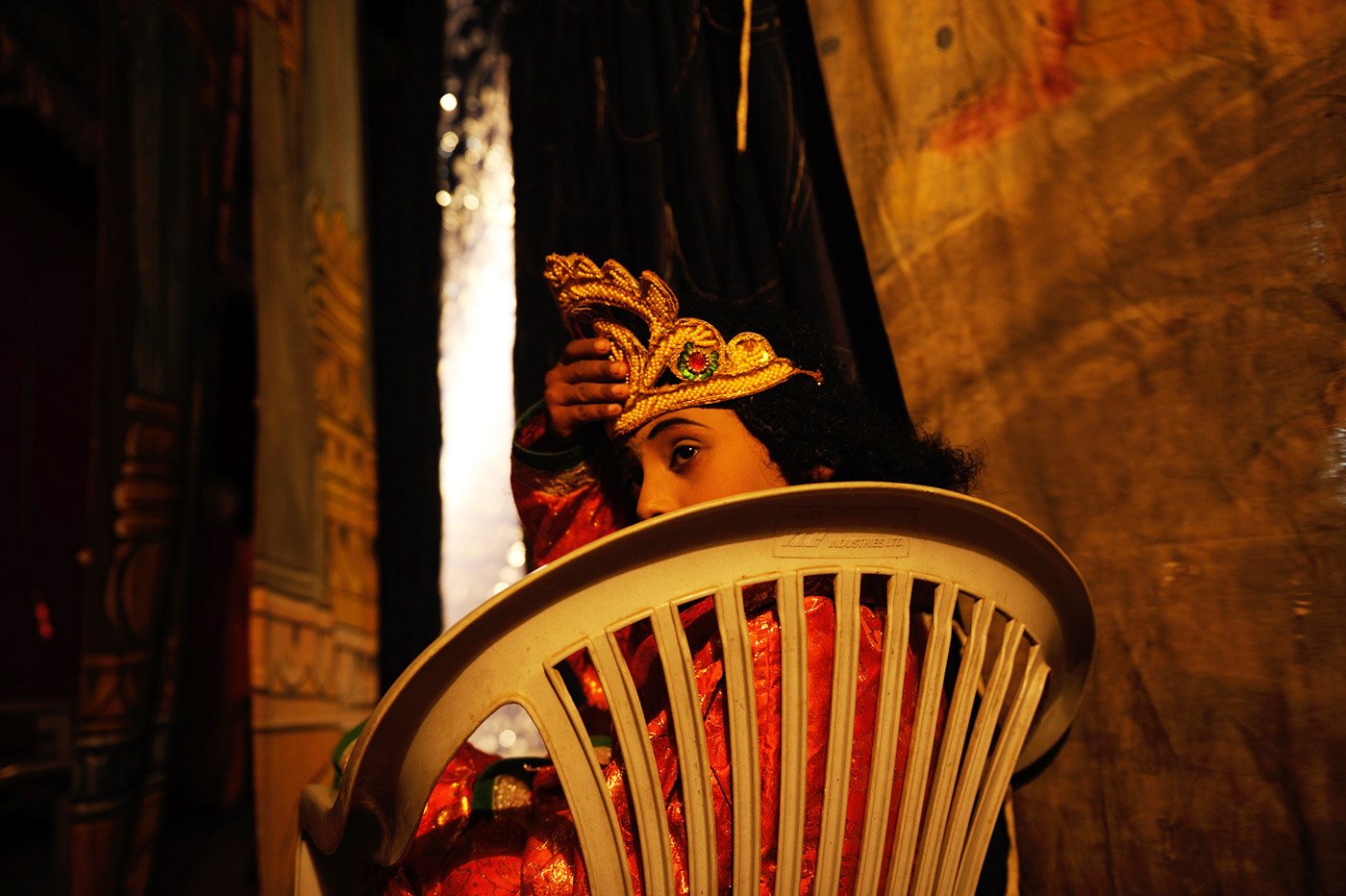 Akshay, 12, plays Sita in the Ramkatha. He stays with Vinayak Shastri, a family friend and the troupe’s manager-director, during the month of Dussehra. He performs on three stages every evening, and earns a  total for Rs. 200 for the three performances. 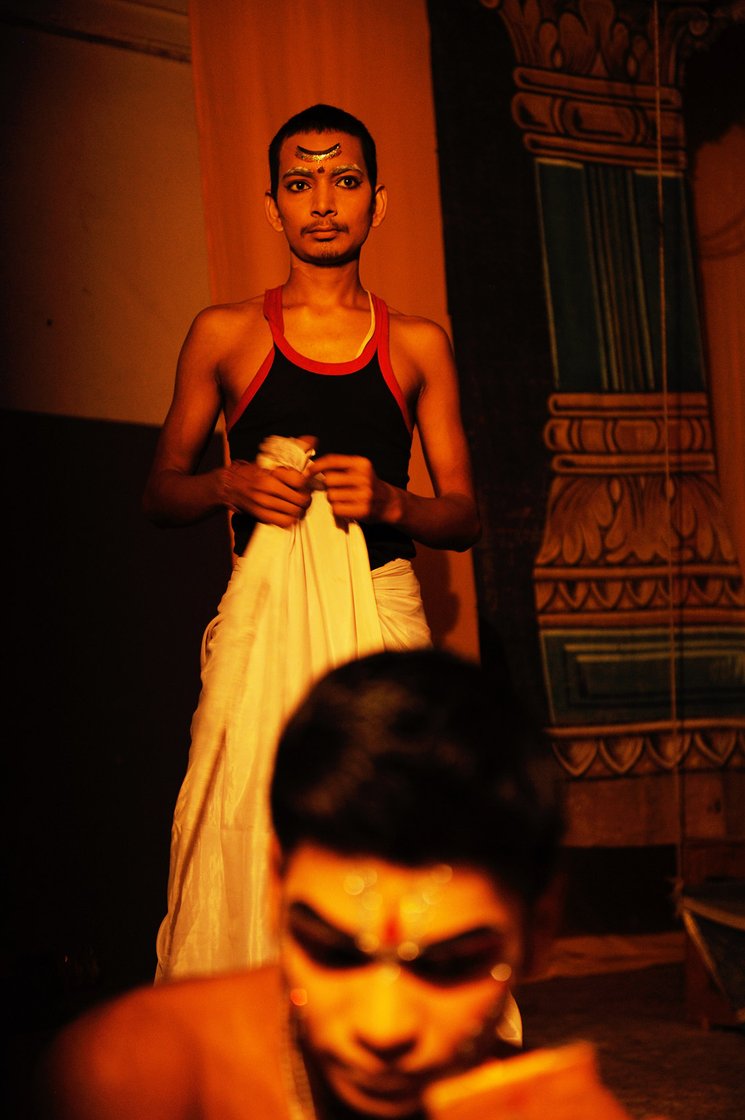 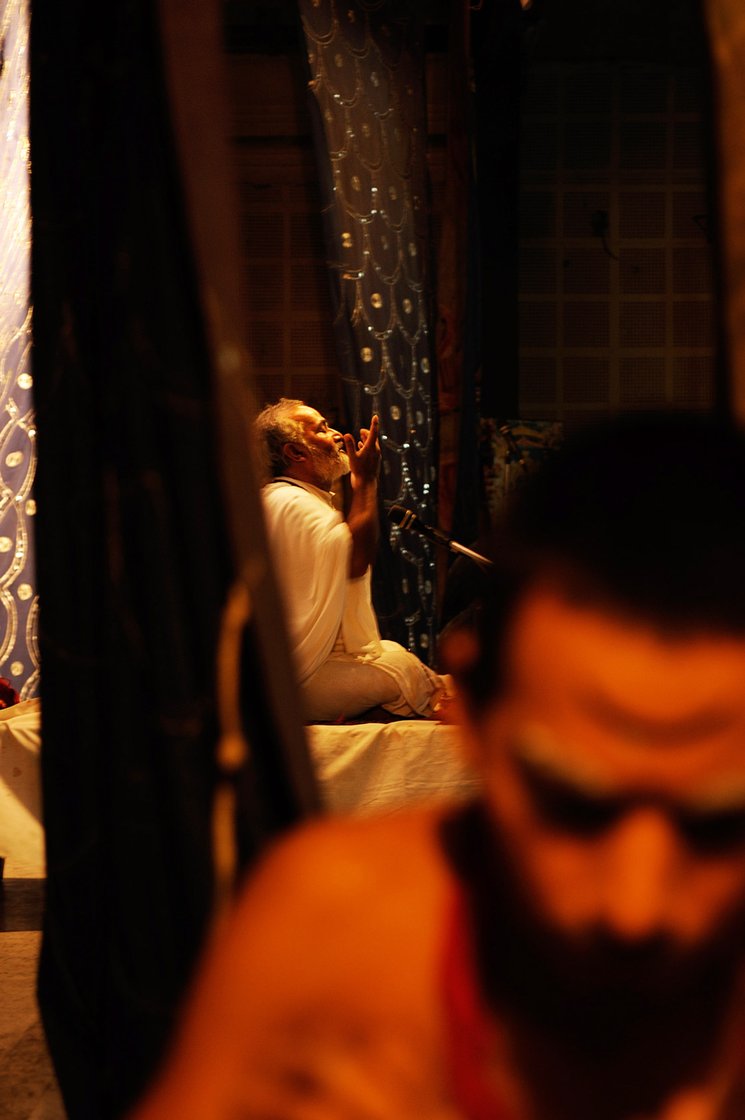 Left: Vijay plays Ram, earns Rs. 250 a night, and works as an electrician the rest of the time. He once dreamt of going to Bollywood, and now thinks about migrating to Kerala to look for a job. Right: Ramkatha performances are sometimes fillers between Hindu religious preaching sessions. Here, Suresh Chand, around 52, is  getting ready for stage. 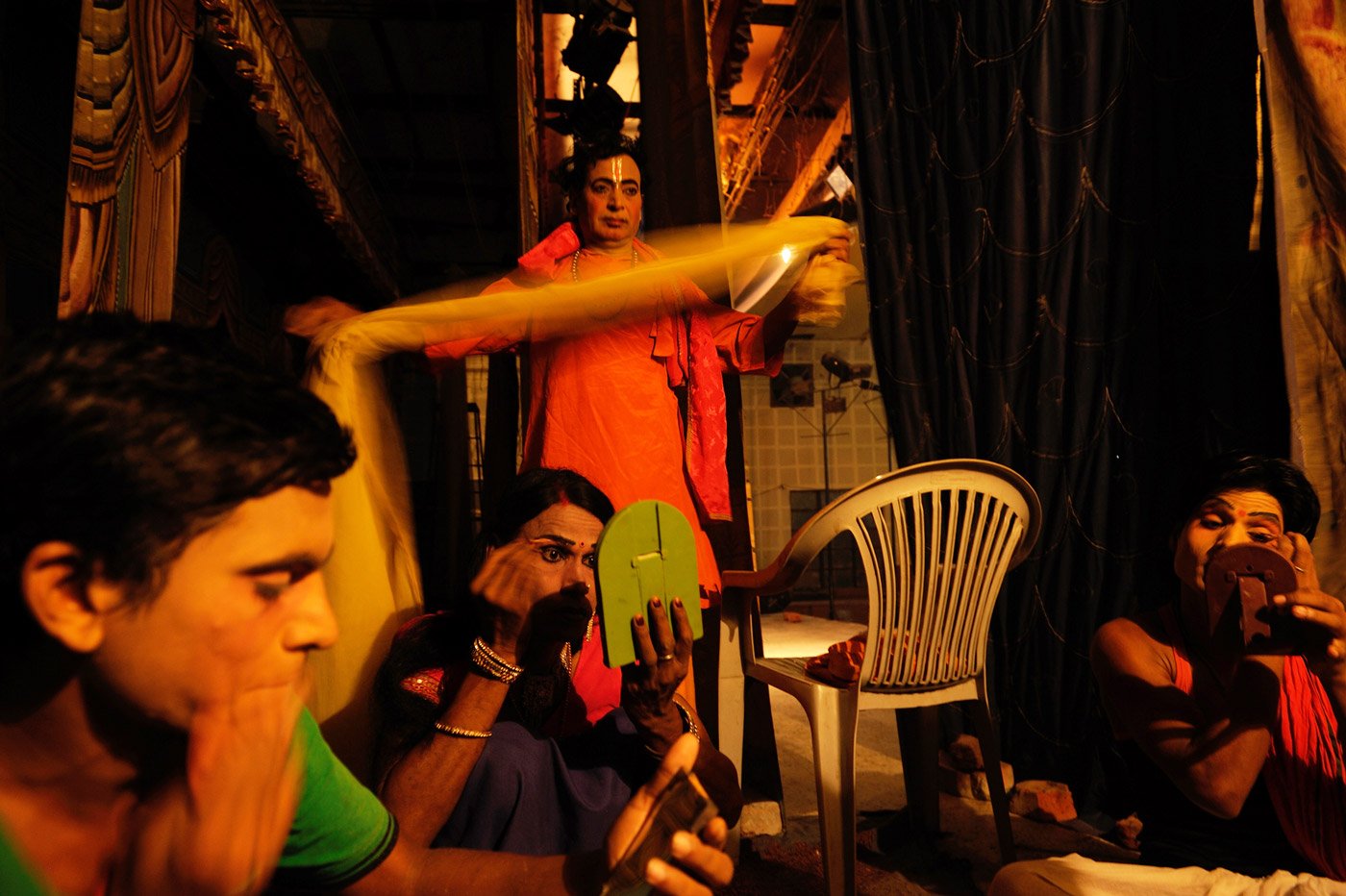 Vinayak Shastri (standing) and some of his Ramkatha performers getting ready for stage under a strong tungsten bulb. At the centre is Dolly, a transgender person recruited by Shastri to sing the virtues of Ram before the play begins. 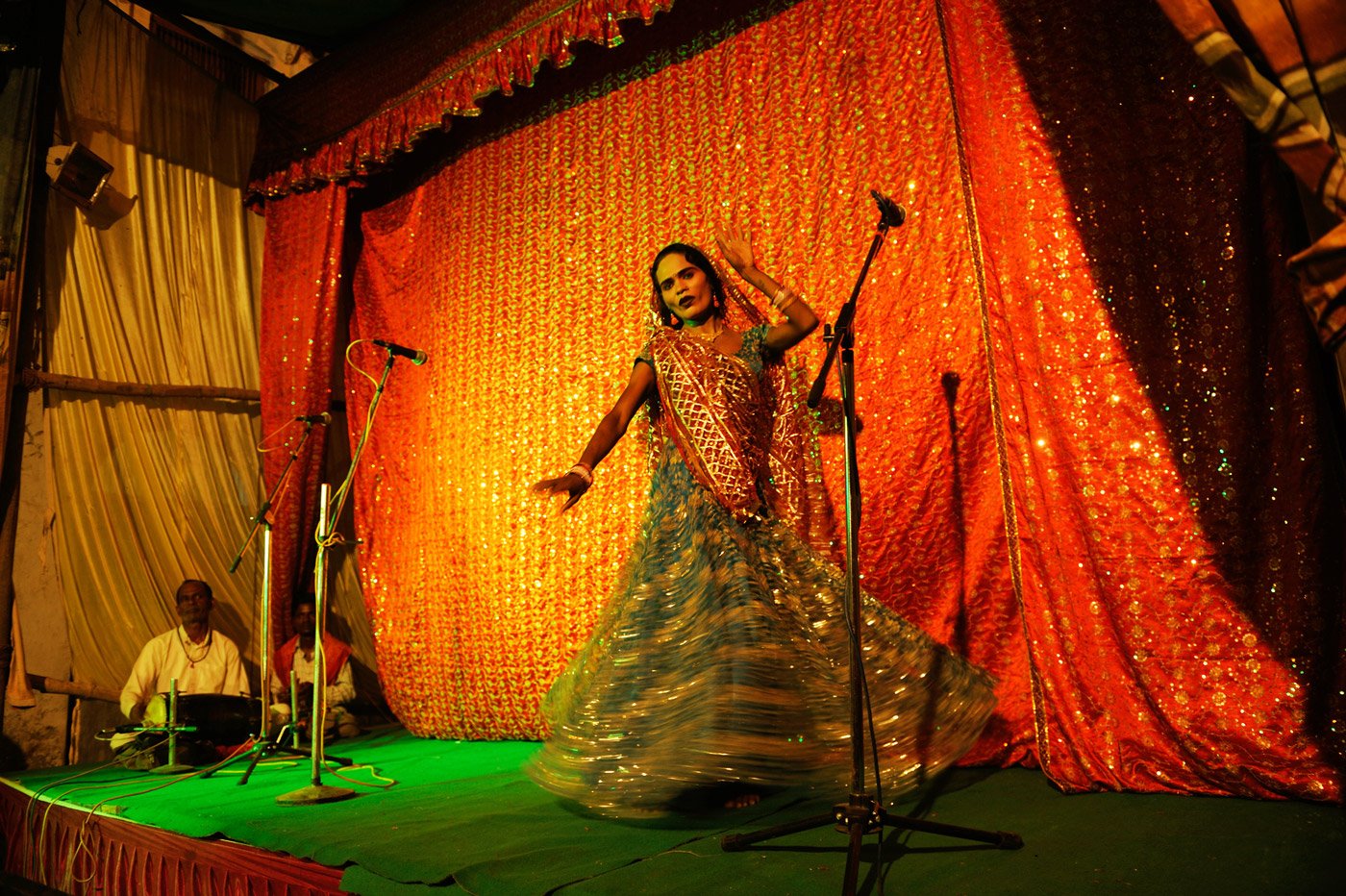 Ramkatha performances often start with a song and dance by a transgender person. 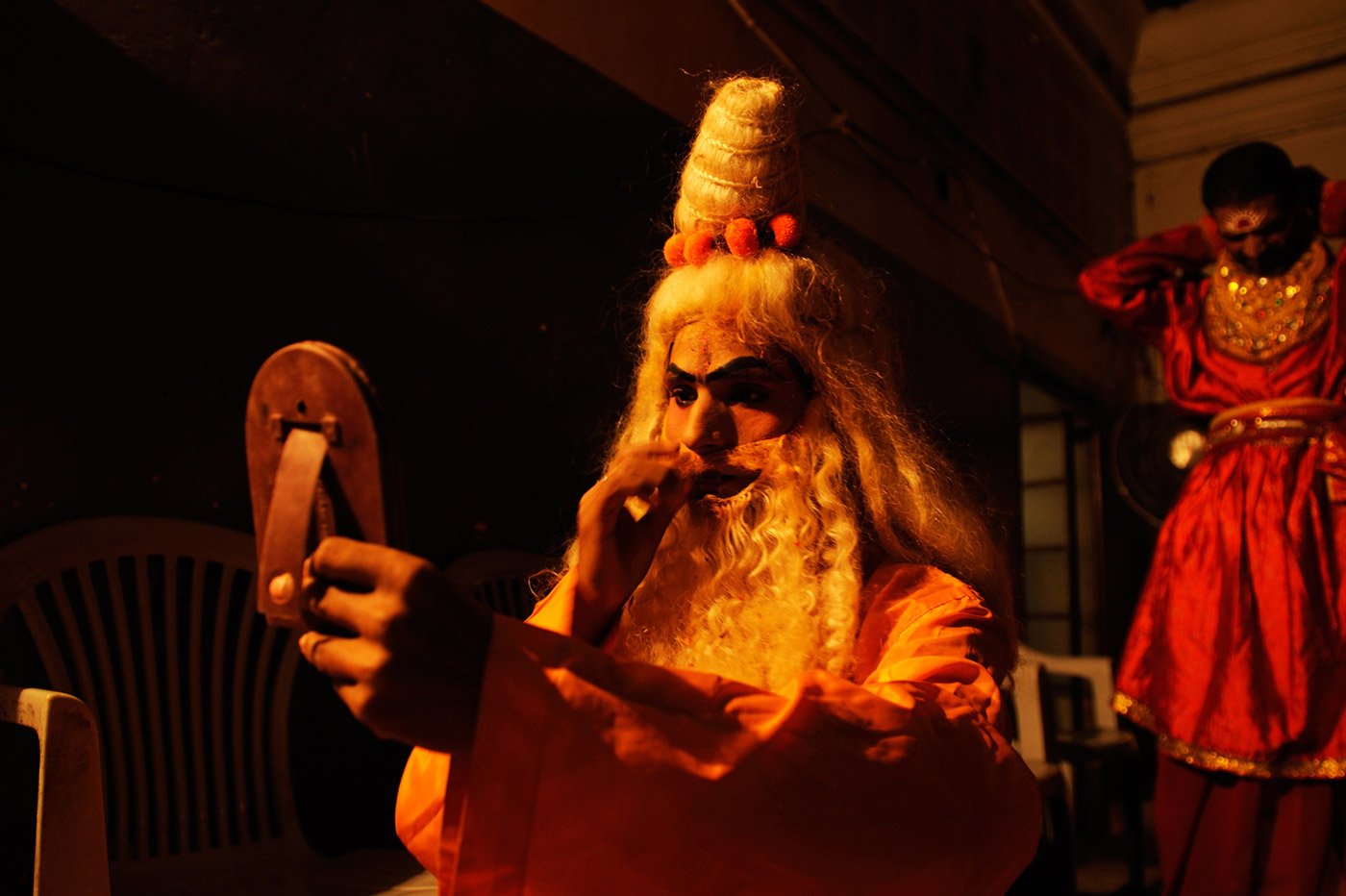 Suresh as Valmiki; he also enacts the role of Ravana. 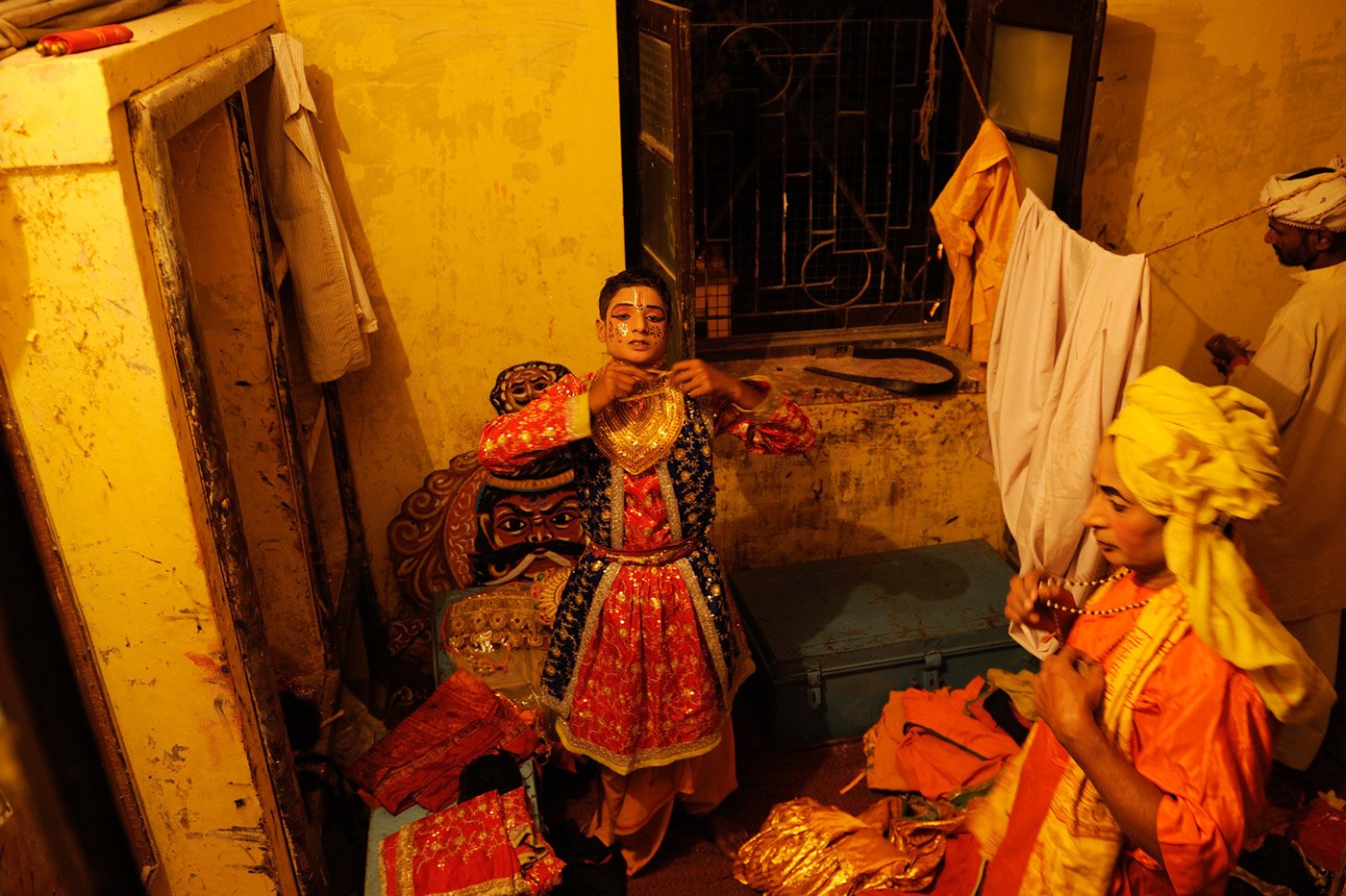 In a makeshift greenroom also lit in harsh yellow, a young boy is getting ready. Ramkatha teams cannot afford to engage a make-up man, and the actors do their own make-up. 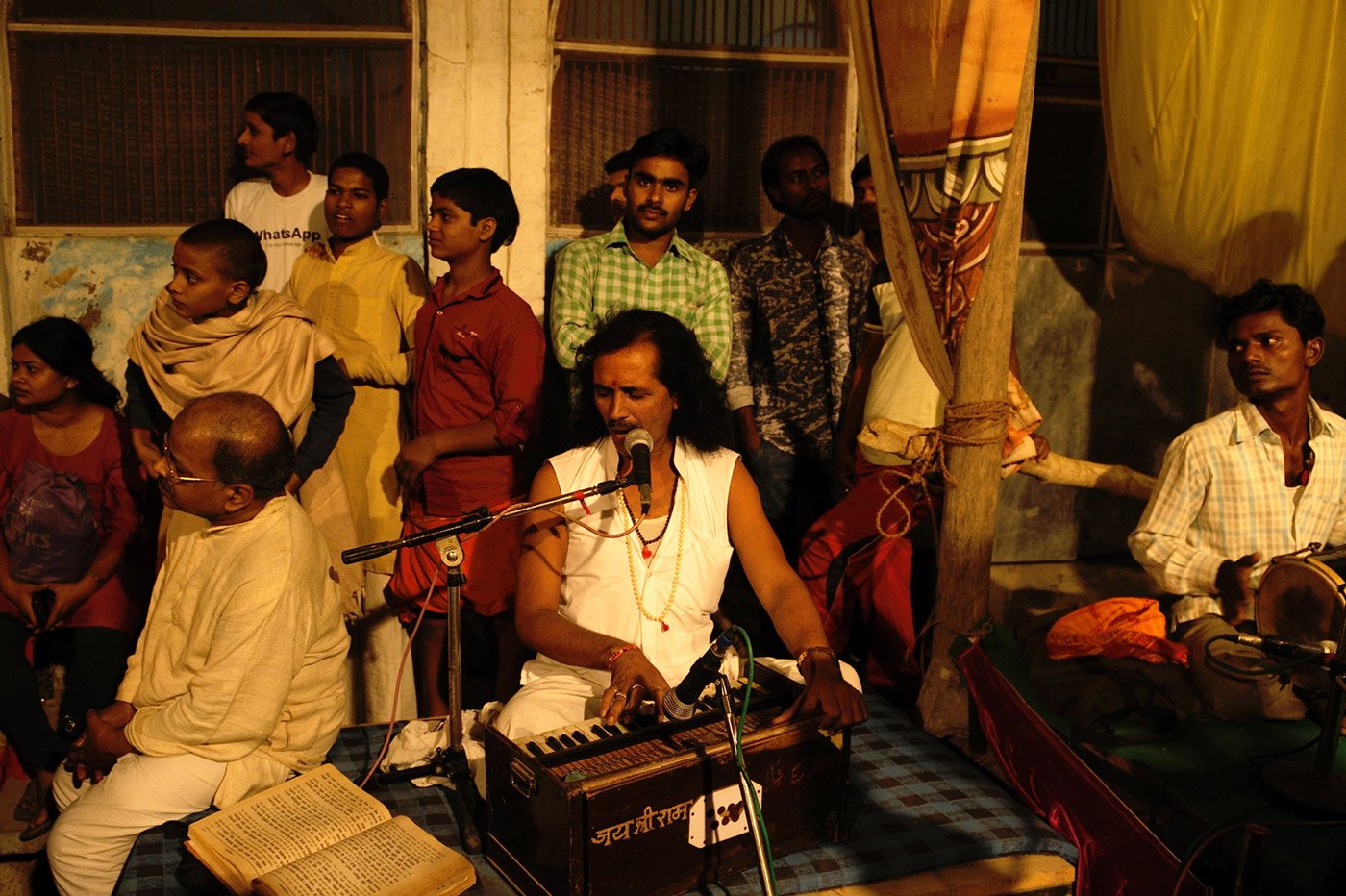 Ganpat Trivedi is the lead singer of the Ramkatha Singing Party. 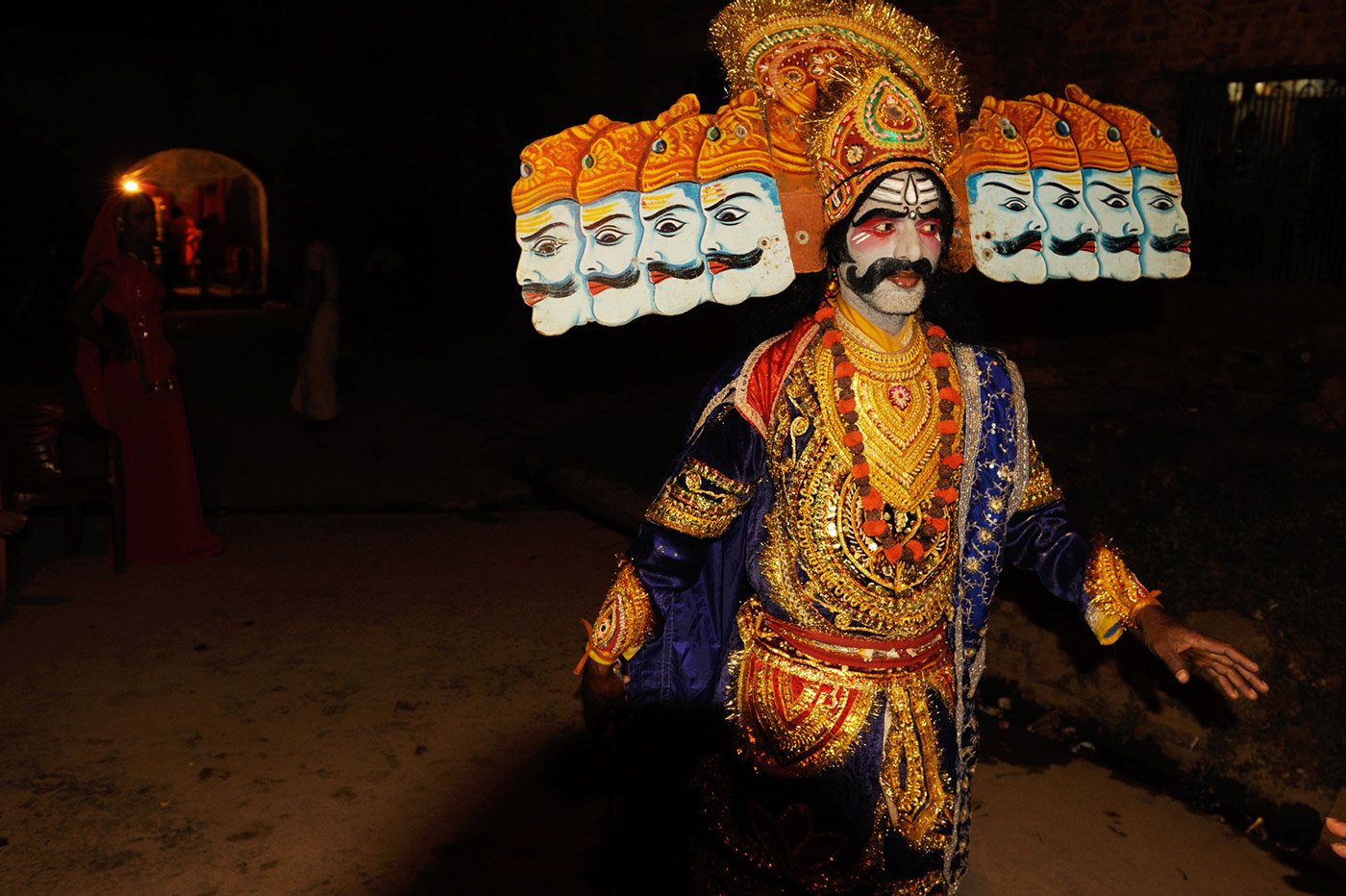 In the thick darkness of an old Ayodhya locality, Ravana is moving towards the stage from a garage-greenroom not far from Naya Ghat on the Sarayu river. 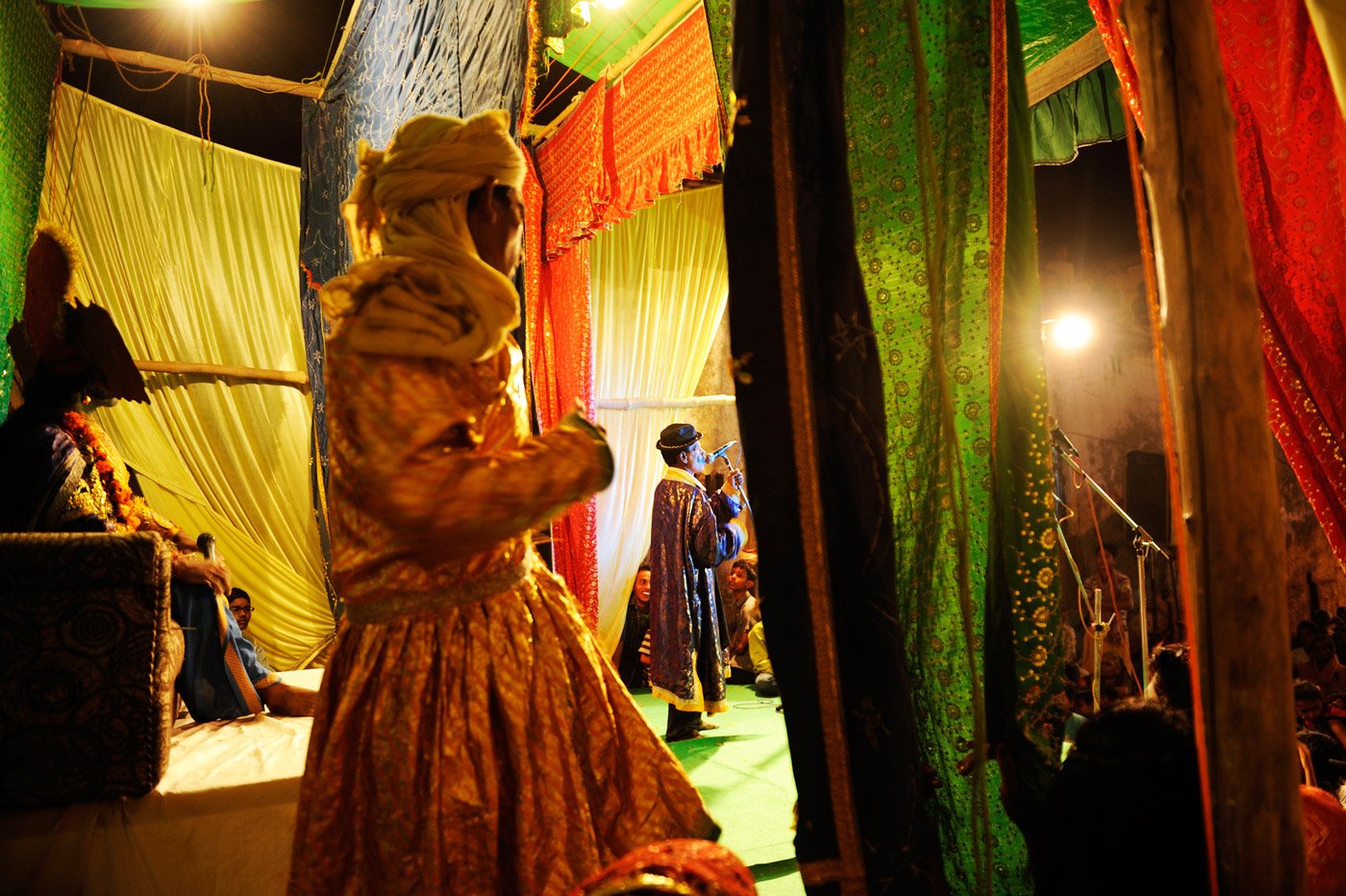 Even a clown is recruited for the Ramkatha Singing Party. Between acts, he appears on stage, mocks Ravana, and lightens the tension. 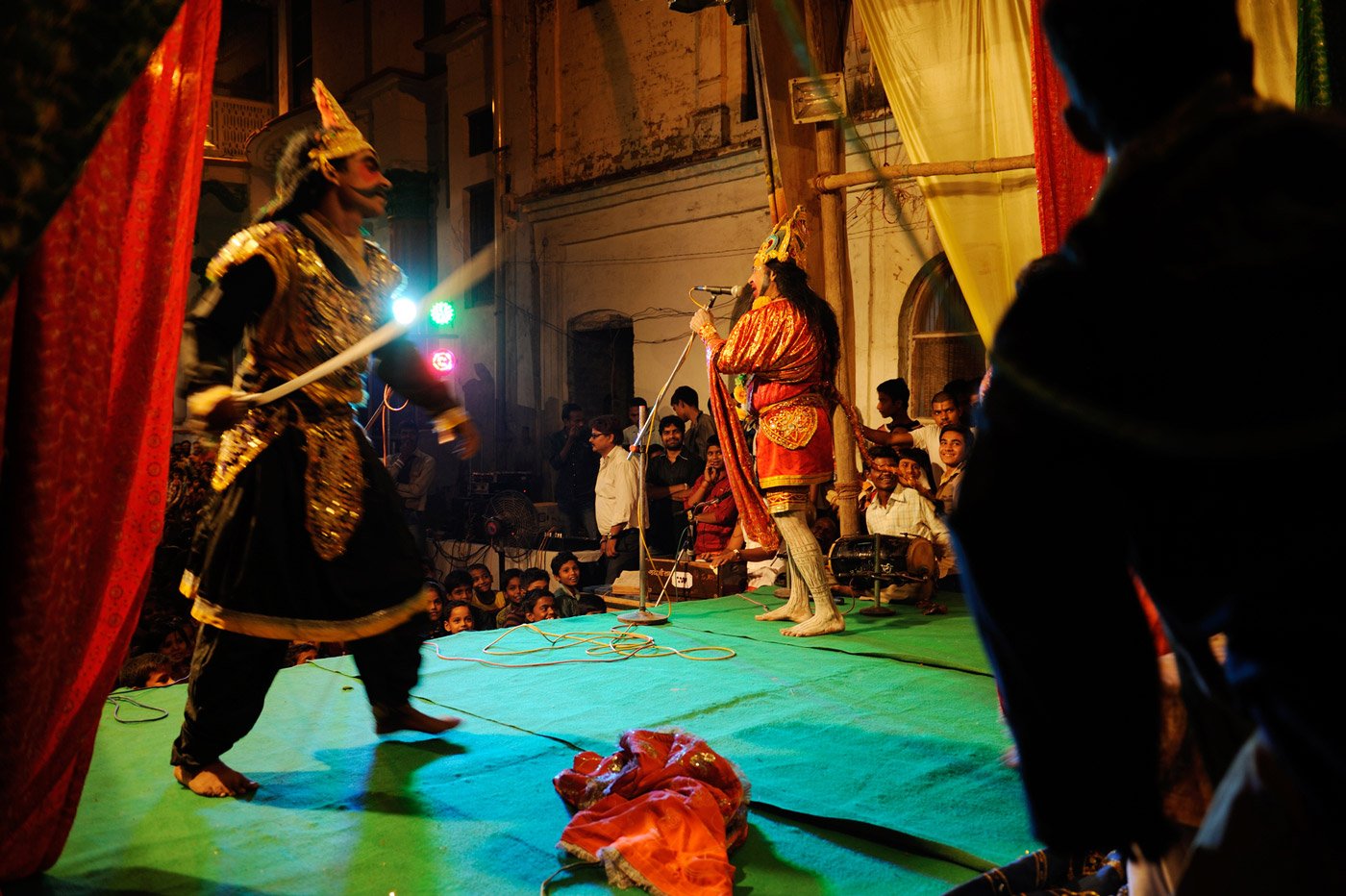 Space on the stage is limited, and only one microphone can be placed on it. Even during a fierce fight,  Hanuman and Ravana have to take turns to use it and speak their lines. This limitation of free movement is made up by their fierce thumping on the wooden stage, which creates the effect of a fight. 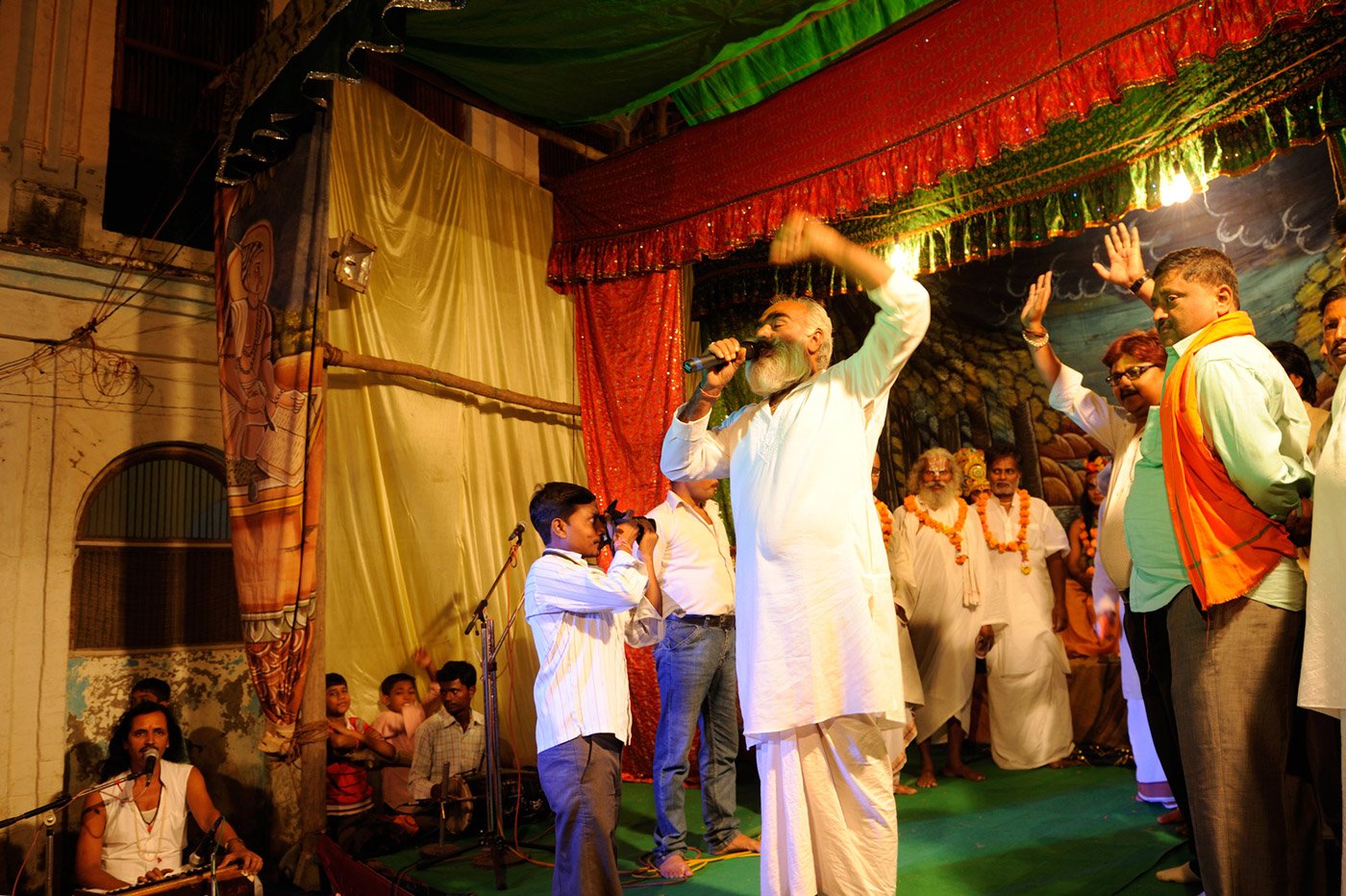 An imaginary battle spills into real life as a local leader pauses the play and romps onto the stage. The slogam – ‘Dar ke nahi marenge, mandir vahi banayenge – rises through the air. 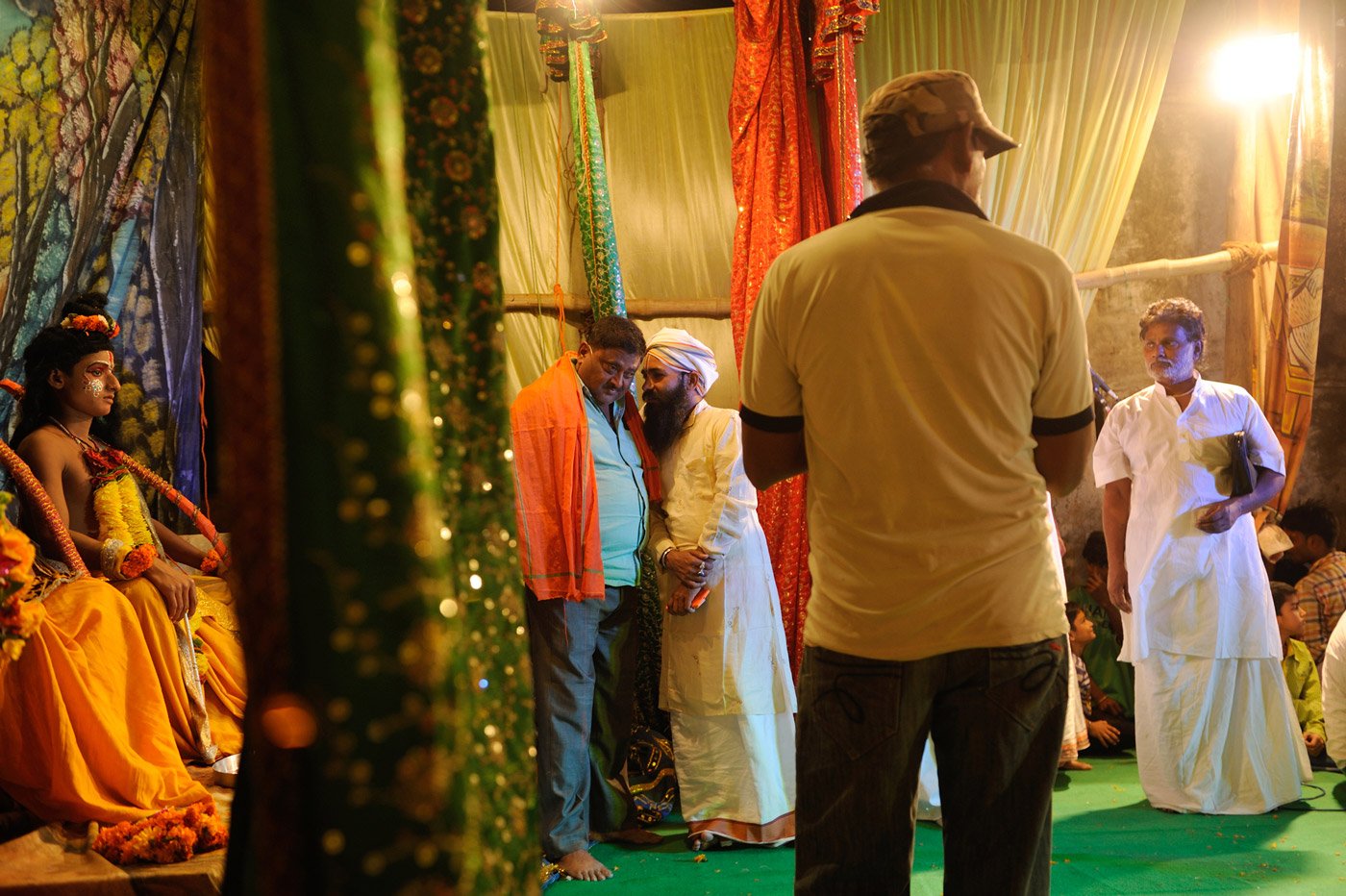 As the leader invades the stage, the epic ceases to breathe. The actors freeze. 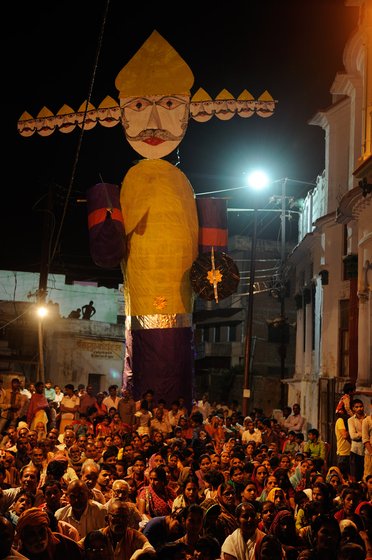 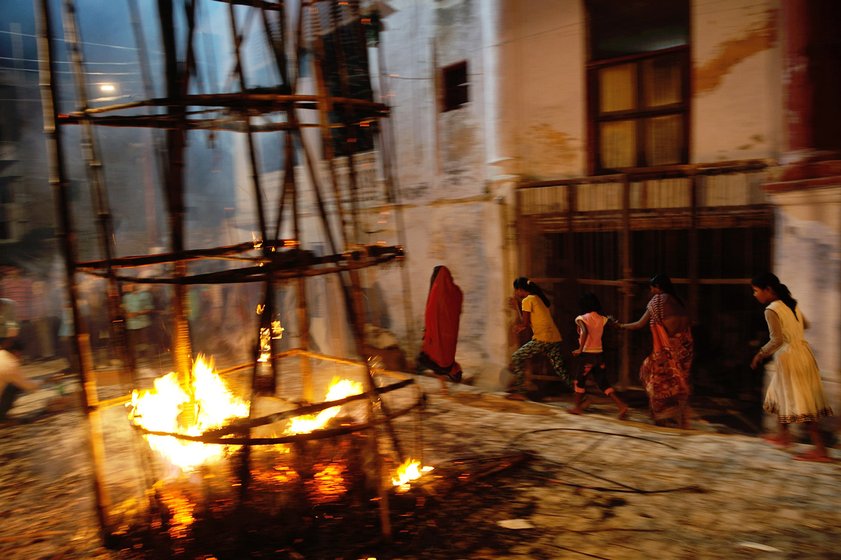 Left: A 10-headed Ravana waits at the other end of the lane to be set aflame at the end of the play. Ram gets down from the stage, walks through the crowd and hurls a burning arrow at the effigy. After that it is all fire. Right: Emotions reach a peak as Ravana starts to burn. 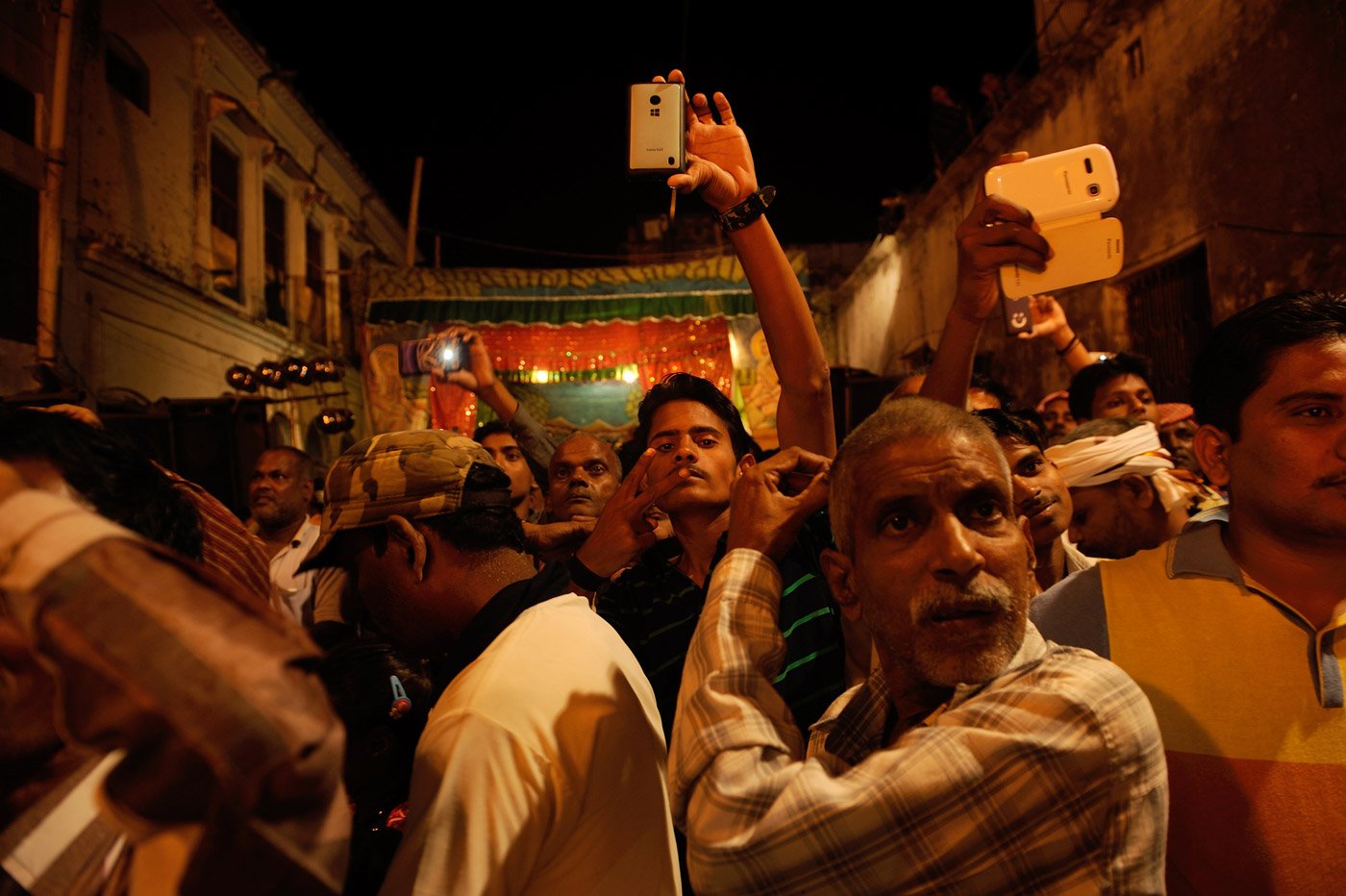 In the light of the fire, people from the audience gather against a vacant stage. For a crowd infatuated with Ramkatha, it is an occasion to witness magic unfold in unpredictable turns. An entire old locality beams with energy where a Ramkatha stage is erected. 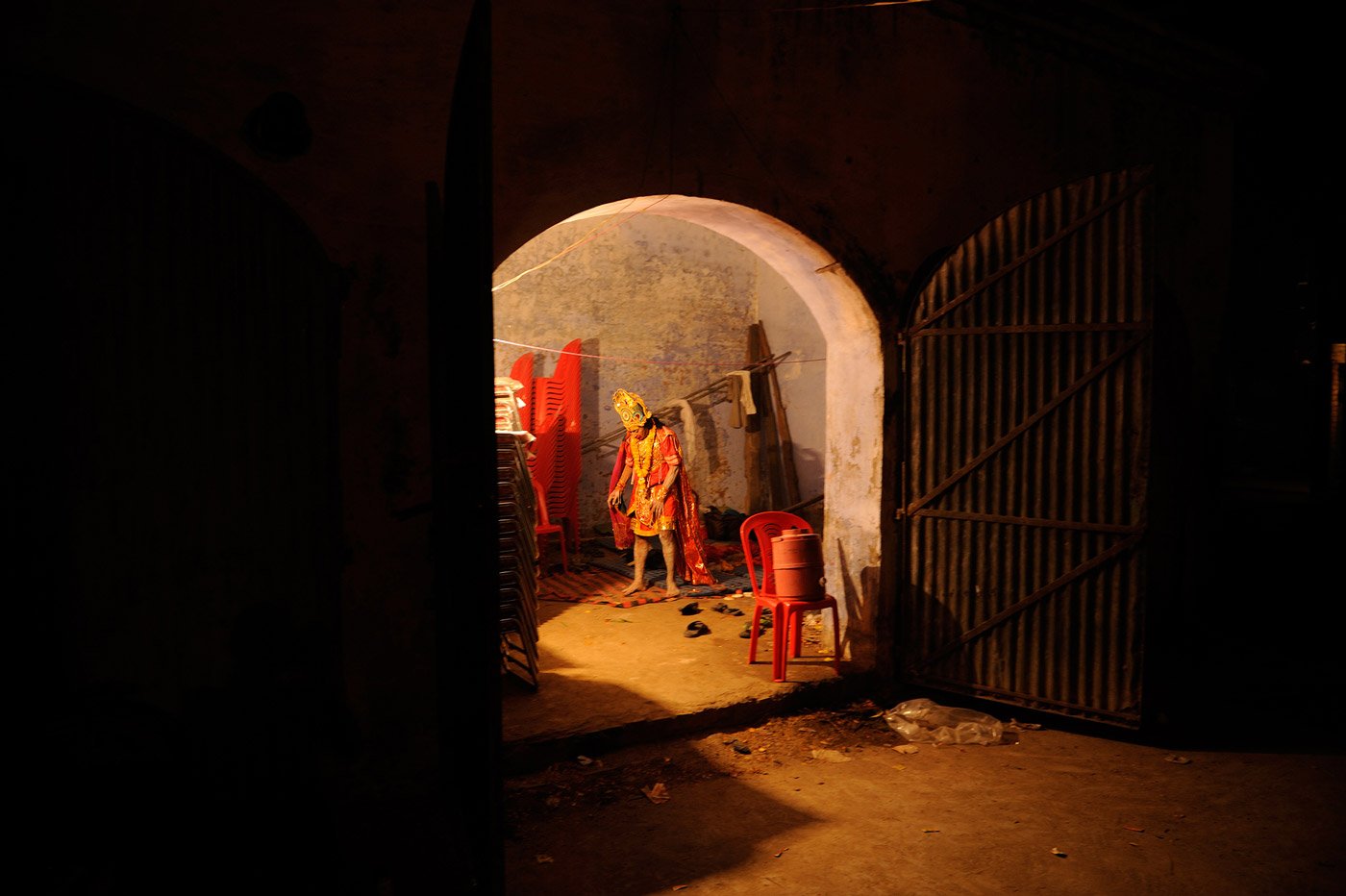 In a garage that is also a temporary greenroom, Vinayak Shastri is finally alone. Everybody leaves as soon as Ravana burns out.