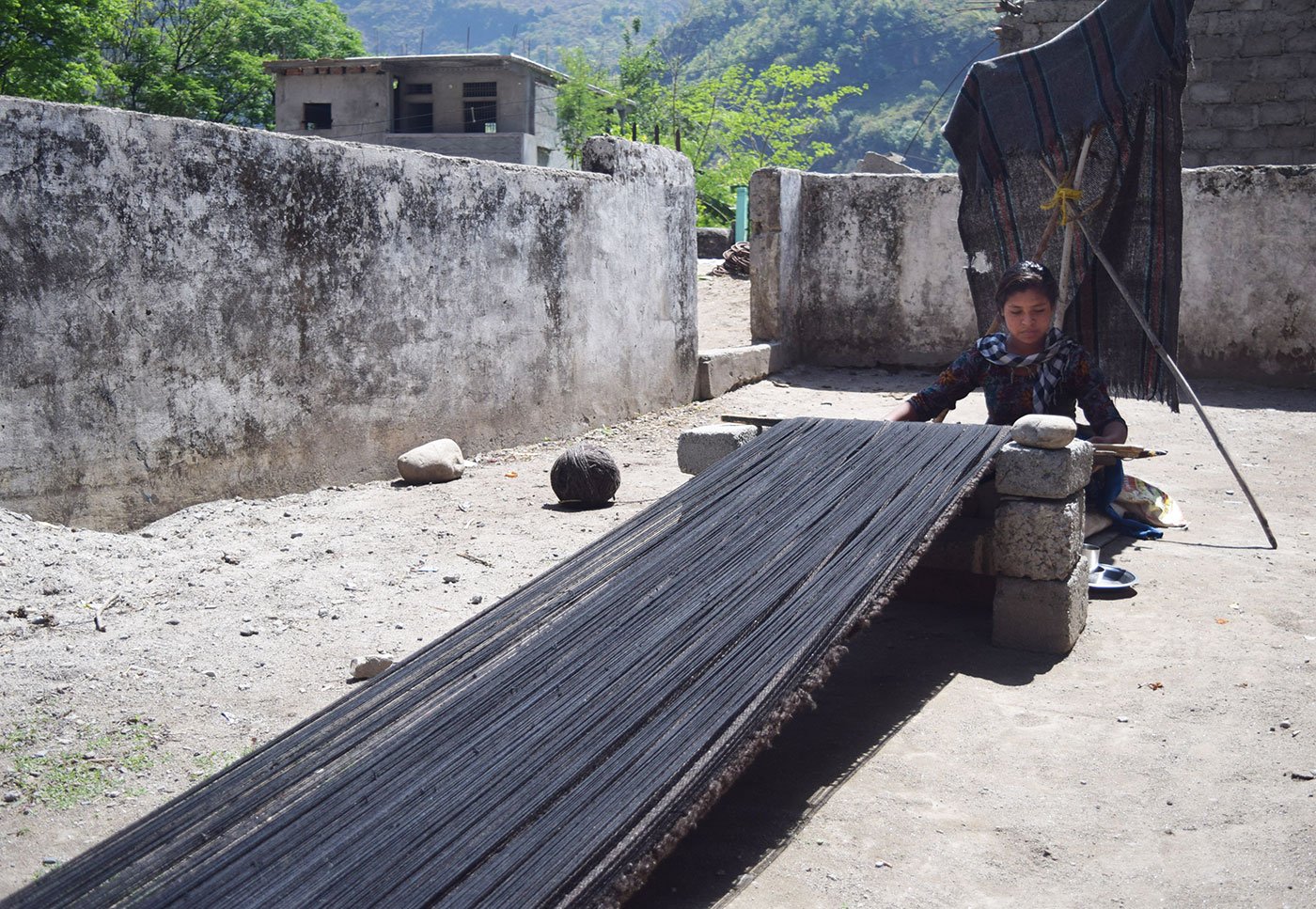 Crushed stones are piled in front of nearly every house along the main narrow lane of Gothi hamlet, along with several sacks. Women of all ages, schoolgirls too, sit on top of these coarse heaps, crushing the stones one by one with hammers and clamps. Men play carrom and cards outside the houses in the lane, after having quarried the stones from the mountains and river beds.

Gothi, a hamlet of Kalika panchayat village, is on the way from the Jauljibi market area to Dharchula town in eastern Pithoragarh district of Uttarakhand. Two rivers – the Kali and Gori – meet at Jauljibi, and there is the constant sound of water. Nepal is a few metres away, with narrow foot bridges connecting the two countries.  The bridges are as shaky as the lives of the people living on either side of them. 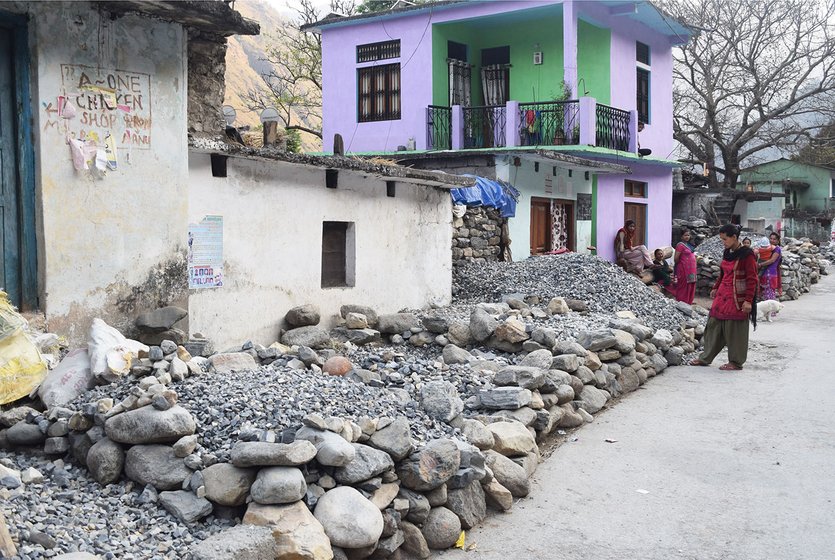 Fulmati Hunar, 32, the cook at the government school in the village, says, “It is difficult to get a job here. During the summer, we go back to our upper-Himalayan homes.” These are in the villages of Go and Baun in Darma valley in the upper Himalayas, close to the India-China border.

Here, at altitudes of 2,500 metres, many families collect yarsagumba for about 45 days, from mid-May. Yarsagumba is a rare and valuable fungus with medicinal properties, though only a portion of its high-value international trade emanating from this region is legal. The people also collect kitchen herbs for sale in various parts of the Kumaon region. “We earn by selling those herbs,” Fulmati says. “However, that is not enough to run a home. So, we crush and sell these stones.”

Local middlemen buy the crushed stones and sell them to contractors who are building roads or houses. It is almost a year-round activity, that has increased after the 2013 flood. In June that year, most of Uttarakhand received unprecedented rainfall. Water from the overflowing Kali river washed away many houses and roads in Gothi, Naya Basti, Kalika and Balwakot in Dharchula block.  The stones are used to rebuild these houses and roads – as well as make new ones.

Each sack of crushed stones fetches Rs. 45, Fulmati says. In a day, she can fill two sacks. “Some women sell three sacks a day. It takes a lot of time, because there are household chores to be done as well," she says, busy making an egg curry at the school. 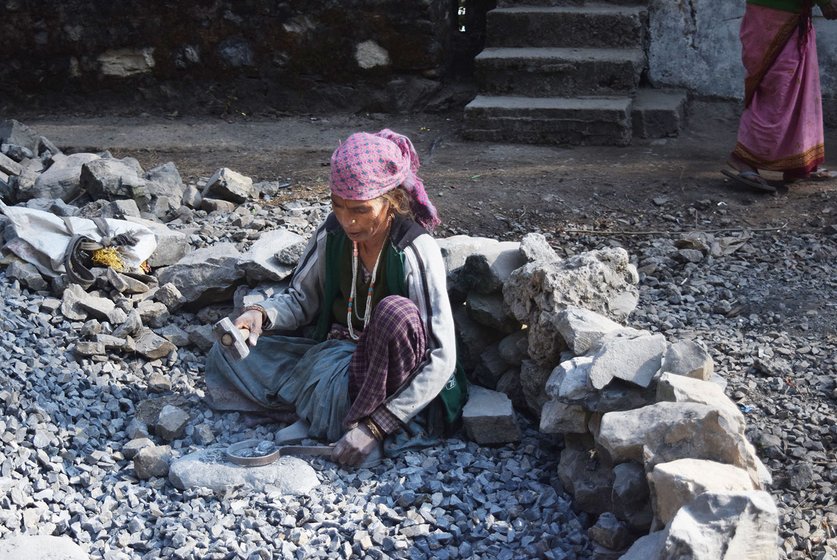 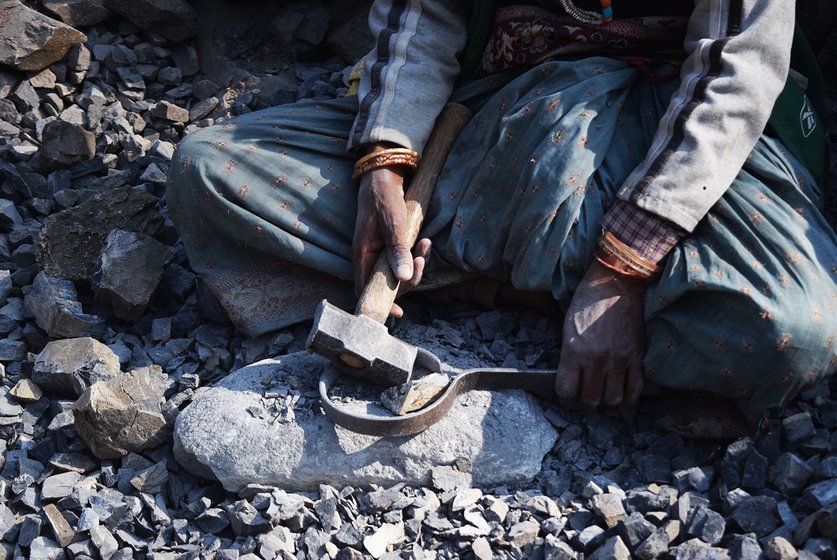 Batuli Devi, 65, breaks stones with only a hammer and clamp, without any protective gear; sometimes tiny pieces of stone get in her eyes or she injures her fingers

In one of the alleys of Gothi, two women are placing pieces of stone on bigger ones, holding them down with clamps, and hammering them. The stones shatter. Their hands, feet and faces are grey with the dust. They don’t wear any protective gloves or masks. “Sometimes, tiny pieces of stone get in our eyes and we rush to the hospital [in Dharchula, six kilometres away]. Sometimes our fingers are injured. But that is all,” says 65-year-old Batuli Devi. It is afternoon, and she has collected a sack full of stones. She says she will work until the daylight fades.

Crushing stones has become a full-time livelihood activity for the women of Gothi not only because of the increased demand for the stones, but also because of the falling demand for their traditional handwoven products. Most of the women here are from the Bhotiya tribe, known for their excellent weaving skills. They can weave anything, from mats to blankets, sweaters to socks, all from wool fetched from herds of sheep in the region. Weaving is what the Bhotiya women most enjoy. This was how they used to earn a living. Their craft commanded respect. But that was in another time, recalls Batuli Devi.

Now the wooden looms – many were washed away or damaged in the flood and had to be remade – are gathering dust in the corners of many homes. Some of the looms that survived the flood are a hundred years old, handed down as precious gifts from mothers to daughters and daughters-in-law. The weaving skills too have been passed down the generations. “If nothing else, a Bhotiya girl will know how to weave and make wine [from wheat],” says Kismati Devi, 52. 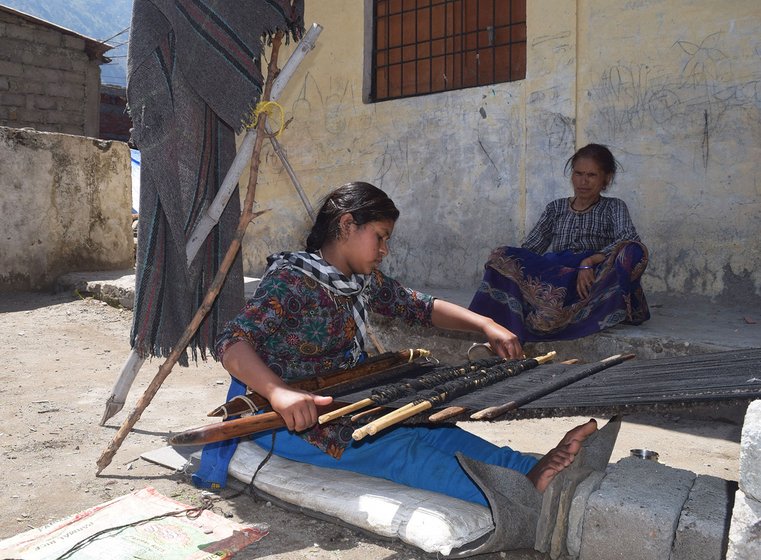 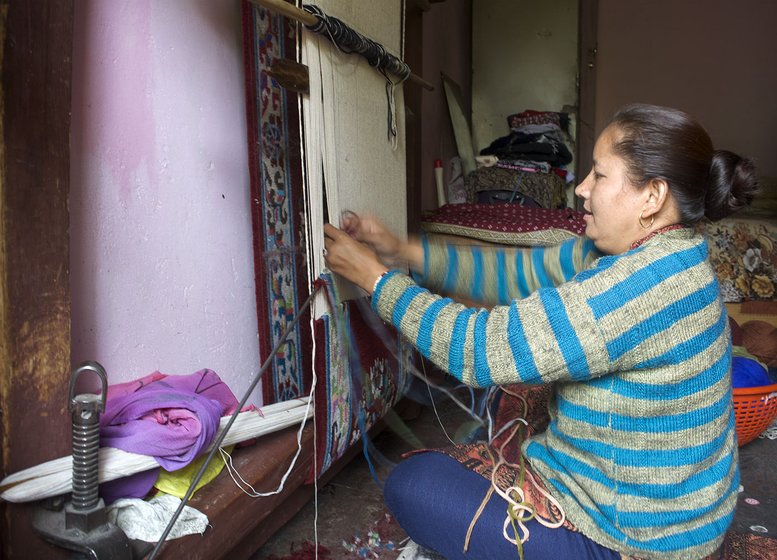 Synthetic rugs have edged out handwoven ones, but weavers like Arti Bona (left) and Kushma Kutiyal (right) still make them occasionally

Fulmati says they used to make chutkhas , thick blankets made of pure wool, and sell them at the annual Jauljibi mela in November. The blanket is heavy, ideal for the cold climate of Kumaon. “Our fathers and brothers would go to Almora and Pithoragarh town to sell the chutkhas . “Each is priced between 3,500 and 6,000 rupees, depending on the purity of the wool. But it takes hard labour and a lot of time to make,” says Fulmati's mother, Suppu Devi. “About 15–20 days to make a chutkha if one spins all day long. Sometimes it can take three months to complete one piece.” 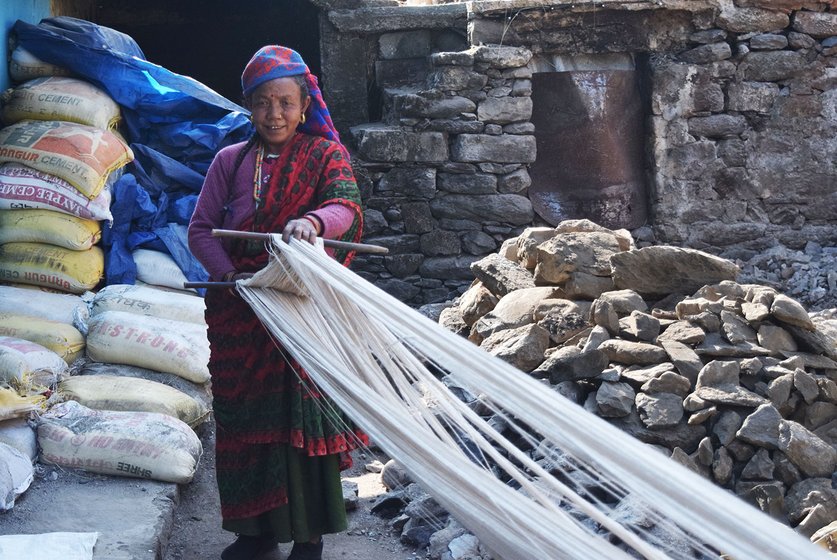 Suppu Devi with the yarn she uses to make a chutkha , a thick blanket which can last up to a hundred years

But this handmade blanket does not sell much anymore. “Nobody wants to pay more than Rs. 2,000 when you can get blankets and quilts much cheaper,” says Suppu Devi, as she unwraps the yarn for my camera. A chutkha survives many generations, at least a hundred years.

The women have also traditionally made thulma (another type of blanket), pattu (a coarse woollen rug), pankhi (a woollen wrapper), dann (carpet) and asan (prayer mat). The elegant embellishments on the mats and carpets are similar to Tibetan motifs – with bright geometric patterns, auspicious symbols and flowers.

But now the looms are only used occasionally to make the rugs and mats.  A pair of asan – long, narrow and intricate – can be sold for Rs. 20,000; bigger carpets can cost more. But the buyers are few. Low-cost synthetic blankets, rugs and wrappers from the India-China border trade and from the plains, including Punjab, have replaced these traditional woollen products in Kumaoni homes. The women now make chutkhas only for their families or for pujas and festivals within the Bhotiya community. 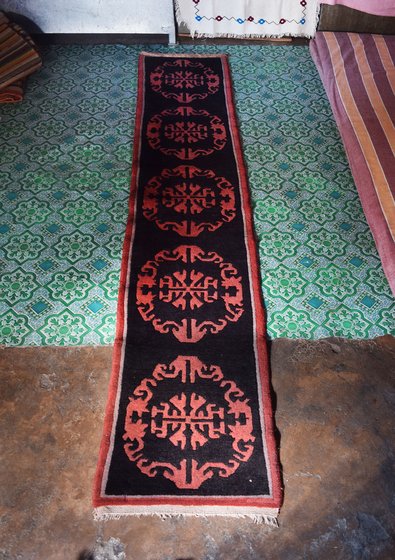 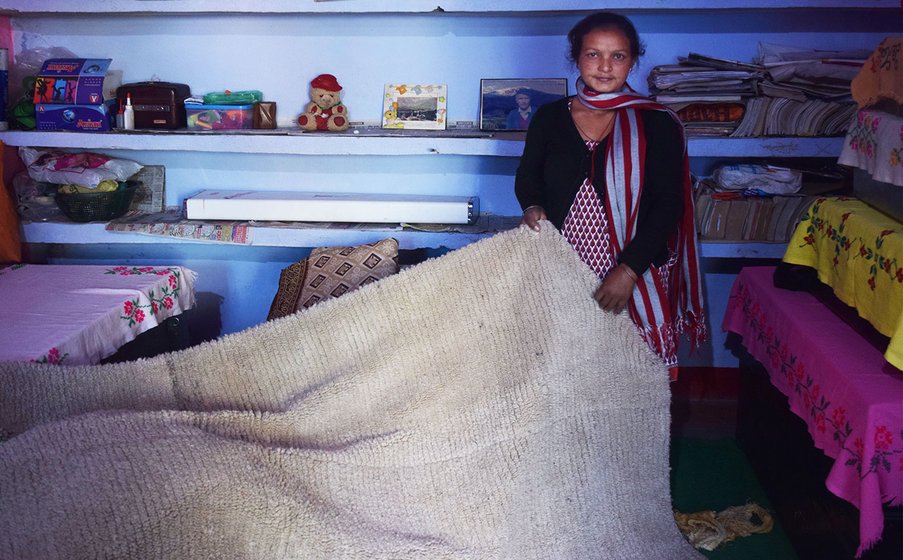 Left: Rugs like these, handwoven by Bhotiya women, can take six months to make. Right: Fulmati Hunar shows a chutkha woven by her

“We don’t like coming out on the road and breaking stones, but we don’t know how else to make money,” says Shanti Devi, who is crushing stone not far from where Batuli Devi is working, focussing on them with her clamp and hammer. A few sacks stand against each other nearby, with two men filling more.

These heaps of crushed stones are everywhere in Dharchula and Munsiari blocks of Pithoragarh district. So are the women and girls crushing them, amid this wide open landscape, with a mountain reaching up to touch the sky. The physical space is vast, but the skills and livelihoods of the people living here are now severely constrained.