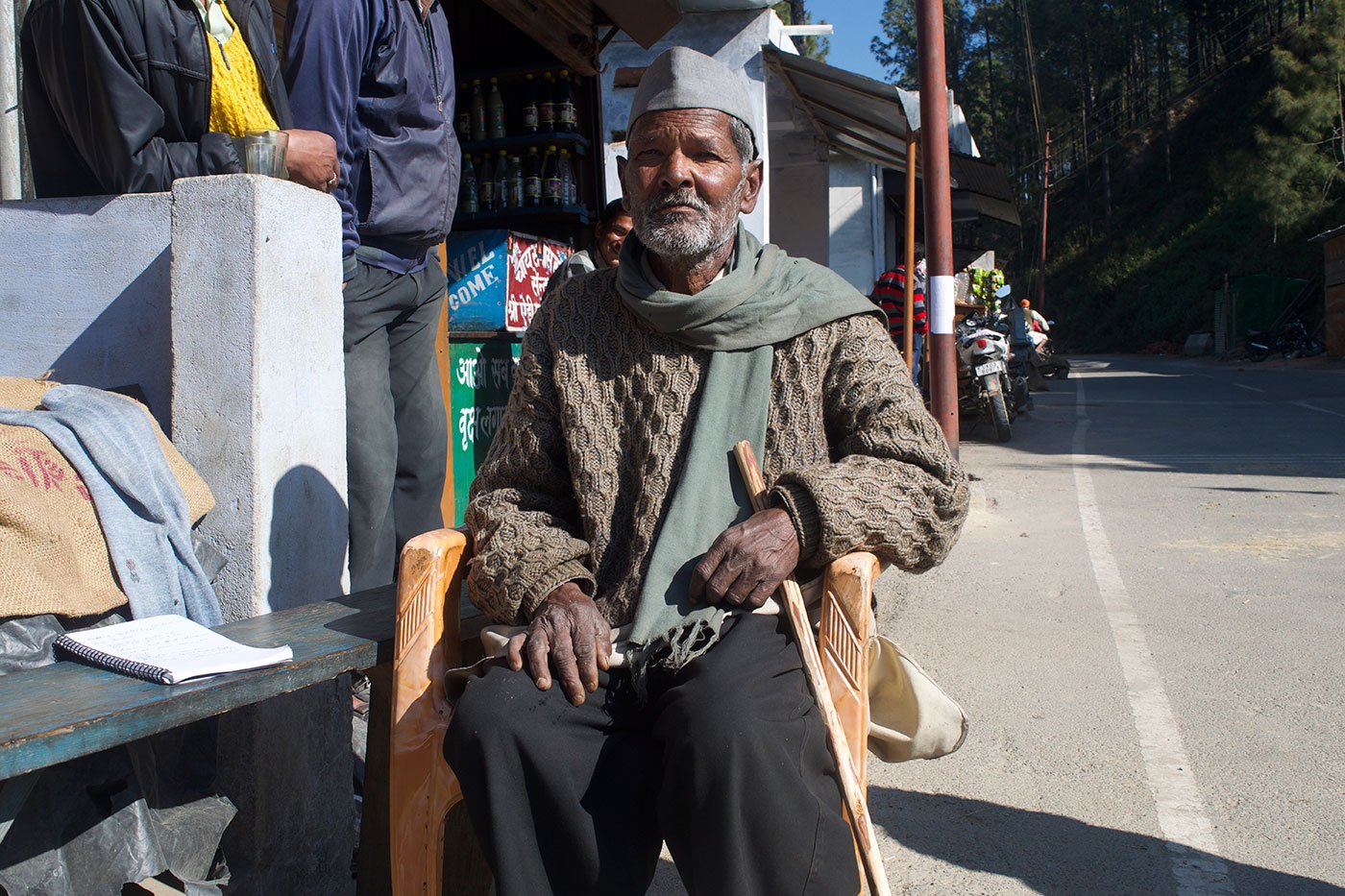 'Aadhaar took away whatever we were getting'

With the high cost of commuting to Aadhaar centres in hilly Uttarakhand, misspelt names and other glitches, many widows, the disabled and the elderly in Champawat district have not received their pension for months

Dhari Ram walks unsteadily, his hands clutching a walking stick, forehead and eyes creased due to the harsh sun of the hills of Gadiura village in Champawat district of Uttarakhand. He is suffering from a hernia, but has no money for a surgery, which will involve travelling 150 kilometres to the government hospital in Tanakpur, or to one in Haldwani, which is even further away.

“I can’t earn even a rupee a month,” he says. So Dhari Ram, 67, a former labourer, a stone-breaker, depends entirely on his old age pension of Rs. 1,000, which he started getting from the state government seven years ago. That precious monthly amount stopped getting credited into his bank account in October 2016. It stopped after the state government discontinued the pension scheme for those who had not submitted their Aadhaar details to the social welfare department of their district.

Dhari Ram did go to register his details at the department in Champawat town, around  65 kilometres from his village, in April 2017. He also has an Aadhaar card, which he got three years ago when a privately-operated centre was opened in  Bhingrara, a nodal area for around 10 nearby villages.  But the name on the card – which he keeps carefully in a plastic cover – is ‘Dhani Ram’. And this does not match his name in the records at the social welfare department. So his pension was discontinued. 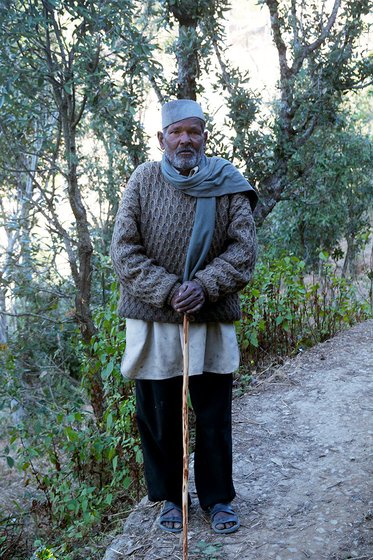 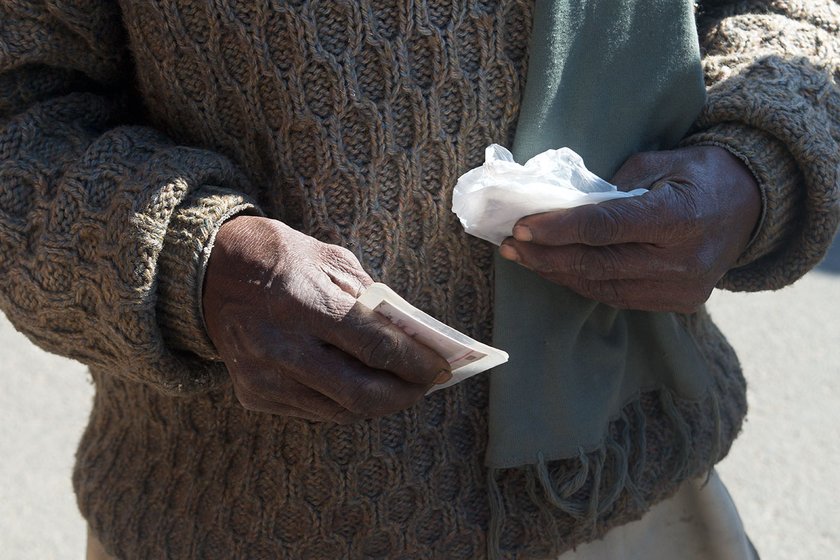 Dhari Ram lives alone; his wife died around 15 years ago. Their only child, a son, lives in Delhi with his wife, and works as a labourer too. Dhari Ram does not have any land. “It’s only because of the hospitality of the people in hills that I’m still surviving,” he says in a barely audible voice.  “When I go to the shops, they are kind enough to give me half a kilo rice and pulses for free. My neighbours also give me food.”  But he wonders how long he must depend on them for sustenance. “They are also poor. Many of them face a similar situation as mine.”

Regional media have reported that at least 50,000 people in the state – widows, the disabled, the elderly – have not received their pensions for 15 months, since October 2016, because of not 'seeding' their Aadhaar details. After the news reports of December 2017, in early January the state government announced that the pensions will be credited till March 31, 2018. Beyond that date however, the government will give pensions only to people whose accounts are linked with their Aadhaar numbers, and whose details are  with the social welfare department. 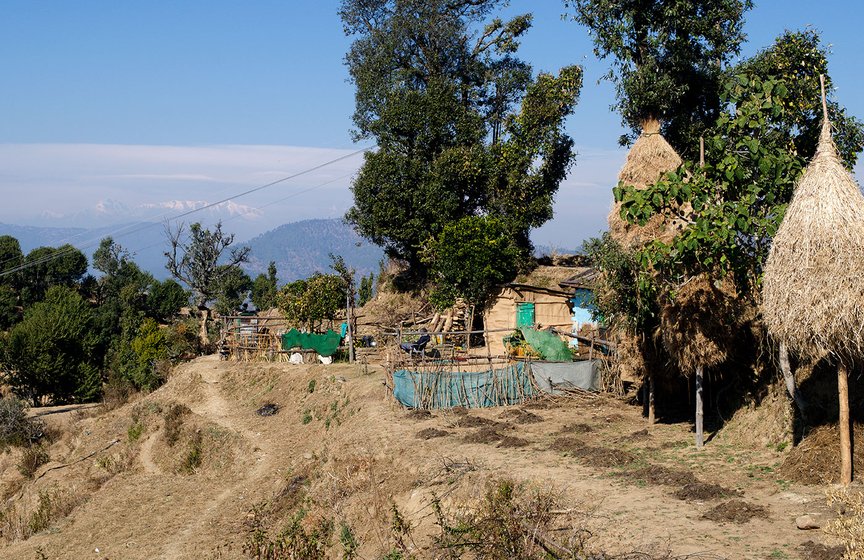 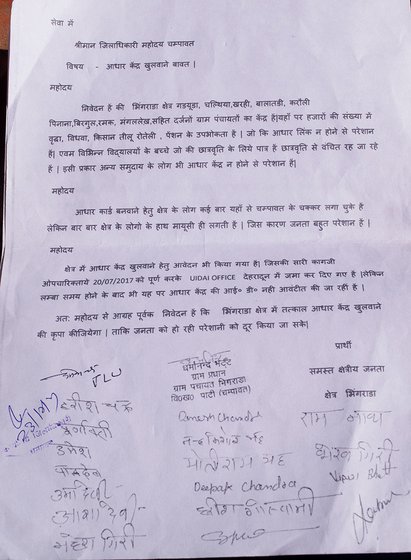 After the government’s announcement, Dhari Ram’s pending pension amount is likely to have been credited to his account in the Nainital Bank in Bhingrara – he has not been able to check yet. But that will stop again after March 31. So Dhari Ram has no choice but to get his name corrected on his Aadhaar card.

But the Aadhaar centre in Bhingrara, along with 500 others in Uttarakhand, was shut down, local media reported, after complaints of irregularities. The nearest government-run Aadhaar centre in Champawat also shut down in December 2017, due to overload and skirmishes over the time taken to process applications.  Now the closest Aadhaar centre is in Banbasa town, 146 kilometres from Gadiura village.

“I couldn’t go to Champawat to rectify the incorrect details on my Aadhaar. It takes more than 500 rupees to travel by shared taxis, spend a day there and then come back. How can I afford that?” Dhari Ram asks. “And it’s impossible for me to travel to Banbasa. It will take 2,000 rupees. It’s better I die here without an Aadhaar card.”

In Gadiura (spelt Gadura in the Census), a village of around 550 people, almost every family has been impacted by the move to link Aadhaar with basic government services. In a land where vast tracks now often run dry and unemployment is high, the Aadhaar rules have only increased the daily hardships of the villagers.

Among them is 43-year-old Asha Devi, who received her widow’s pension till October 2016. Her husband, a contractual employee with a government waterworks department, died six years ago. With her monthly pension of Rs. 1,000, she could send her children to the village school – three boys, aged 14, 12 and 7. When the money stopped, the two older sons dropped out. “In government schools too one has to buy exercise books. Where would I bring the money from? My sons and I can work as labourers. But there’s no work, so where will we do daily wage labour?” she asks.

'Once a shop sees that I don’t have money, they stop giving me rations. Then I buy my supplies from some other shop. That too stops giving me rations after some time...This is how we live...'

Watch video: many women in Champawat district haven't got their widow's pension due to incorrect details on their Aadhaar cards

So why did Asha Devi’s pension stop? Her account (in the social welfare department's records) has her husband’s name, Govind Ballabh, while her Aadhaar card lists her father’s name, Bal Krishna. It’s another matter of course that women are required to give their husband’s or father’s name in official forms and applications.

“With the pension, I would have persuaded my children to go to school. I have some land [barely 200 square metres], but there’s no rain. I sow some coriander [for home consumption], but that doesn’t grow without enough water,” Asha Devi says. “I was buying ration from shops [in Bhingrara; rice, oil, dal, and other items] on credit. But once a shop sees that I don’t have money, they stop giving me rations. Then I buy my supplies from some other shop. That too stops giving me rations after some time. Then I go to another shop. This is how we live our life. There’s no work. There’s no money. On top of that Aadhaar took away whatever money we were getting from the government.”

While many women here have not received pensions because of variations in their husband’s or father’s name,  many men have been denied a pension all these months because of missing surnames on their Aadhaar card, or due to slight changes in the matra (vowel sign) in Hindi. Liladhar Sharma’s old age pension stopped because of such an omission. “Whose fault is it that my surname is missing from my Aadhaar [card]?” asks the 72-year-old retired farmer. “It surely isn’t mine. But I have to suffer.”

So instead of the uphill task of rectifying their Aadhaar details by making time-consuming and expensive trips to faraway centres, Sharma and others have come up with another solution: “Some of us are opening new bank accounts [with the name as it appears on the Aadhaar card] because the previous bank accounts with these mismatched details will stop working once Aadhaar becomes mandatory.”

In Satish Bhatt’s family, two pensions had stopped since October 2016 – of  his mother Durga Devi and mentally disabled brother Raju. Durga Devi’s Aadhaar card has her father’s name, Joga Dutt, while her widow’s pension account lists her husband’s name, Narayan Dutt Bhatt. After the recent government announcement, Rs. 9,000 of her pending 15 months’ pension has been credited to her account. This will stop again after March unless she rectifies the details. 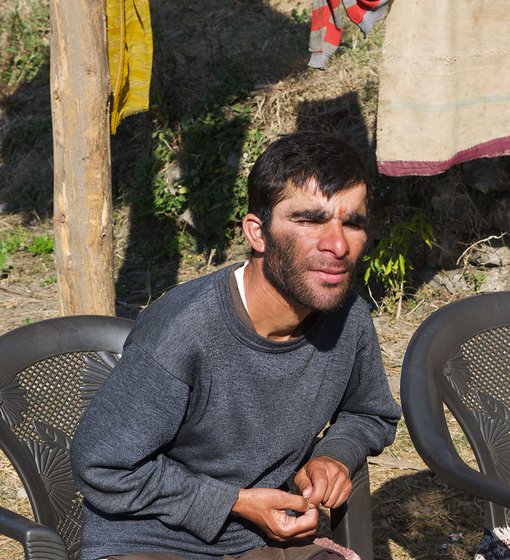 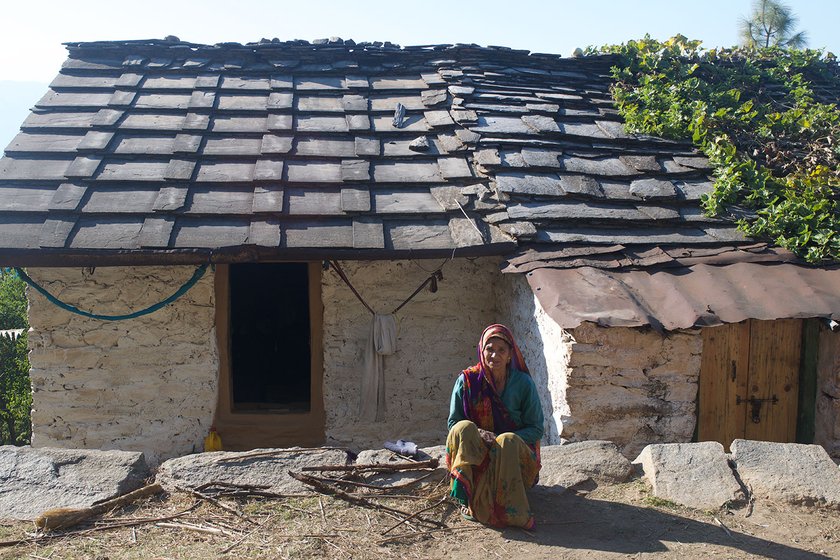 The disability pension of Raju Bhatt (left) was suspended for want of an Aadhaar; he enrolled and got a receipt but not the card. His mother Durga Devi's (right) widow's pension too stopped due to Aadhaar mismatches

However, Raju’s pension remains suspended. Satish feeds his family of six – his wife and two children, and his mother and brother – with the Rs. 6,000 he earns every month as a construction worker on sites around the village. In October 2017, he booked an entire car for Rs. 2,000 to take Raju to an Aadhaar centre in Champawat to enrol him for a card. “When my brother was asked to open his eyes for the iris scan, he would close them immediately. He’s mentally ill, many things he doesn’t understand. We can’t force him. Still, we received an acknowledgement of his enrolment. But later we were told his enrolment was rejected. He now has to be enrolled again. How can I afford spending thousands of rupees just on this?” asks Satish.

Numerous residents of nearby villages in the Bhingrara area, including Balatari, Karoli, Chalthiya, Bhingrara, Birgul and Pinana have similar painful stories. On December 23, 2017, they gave an application to the district magistrate, asking for an Aadhaar enrolment centre in Bhingrara. They haven’t yet received any response.

Dr. Ranbir Singh, additional chief secretary,  social welfare department, Uttarakhand, does not dispute that at least 50,000 people in the state have not received their pension since October 2016. "Aadhaar has been made mandatory, and I am aware there are issues,” he says. “We are dealing with them. For people who have no Aadhaar cards, and people who have Aadhaar with incorrect details, for now the date has been extended to March 31, 2018. If problems persist, we will consider extending the deadline. But they have to seed their Aadhaar details in this department. And if a person's name is misspelt on their Aadhaar card, we will take that as the final name so that the person doesn't face any problem."