Himalayan poll issue: my way not the highway

People in high-altitude villages of Uttarakhand, who walk miles across mule routes on steep mountains, ask which political party will complete the long-pending road here if they vote it into power on April 11

Sukhmati Devi’s legs sometimes tremble nowadays. Climbing up and down mountainous terrain has taken a toll. For decades, Sukhmati, a 65-year-old farmer, has trudged more than 70 kilometres up to Kuti, her high-altitude village at around 3,600 metres. She lives in Kuti from May to November. When snow covers the village, she climbs down 70 kilometres to Dharchula town, at 900 metres.

At times, she uses a horse when the ascent is so steep that it can take hours to climb three-and-a-half kilometres. But that option is difficult now, because parts of the walking route have disappeared under the rocks and debris that come down with the rains. The residents of the villages here say this happens when the Border Roads Organisation (BRO), which is constructing a road to Lipulekh Pass, blasts the mountains with dynamite.

So Sukhmati’s annual trek to Kuti has become even harder, scrambling over the debris and rubble. The route includes treacherous narrow climbs criss-crossed by the rivers Kali and Kuti-Yangti. “I hope one day I can travel to my village by car,” she had told me when we walked 70 kilometres to Kuti in May 2017. It took us five days to reach her village of 363 people in the Himalayan Vyas valley.

Sukhmati Devi ( cover photo on top ) is one of the 2,059 residents – all from the Bhotia community, a Scheduled Tribe – in seven villages close to the India-China border for whom the road is a big election issue for the 2019 Lok Sabha elections. It has been one of their main concerns during every election, state or general, for many years. These villages will vote on April 11. 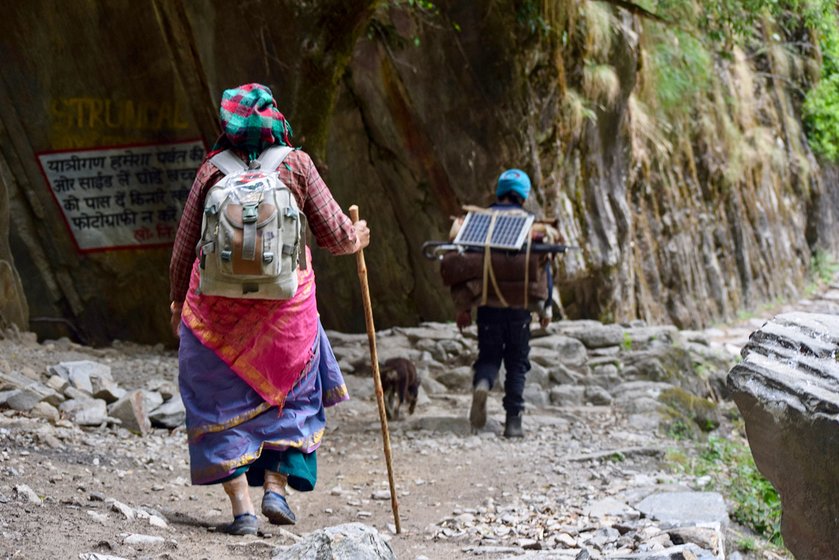 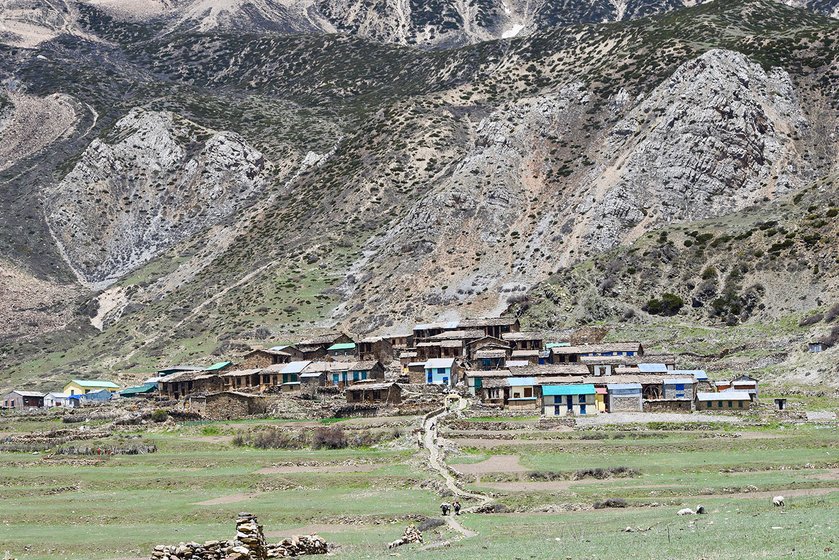 Sukhmati Devi, 65,  has to trudge for 70 kilometres to Kuti (right), her high-altitude village in Uttarakhand, while a porter carries some of her belongings. A road, say the villagers, is their biggest issue for the upcoming Lok Sabha election

Besides Kuti, the mule route – now slowly being replaced by a road – is the lifeline for Bundi, Garbyang, Gunji, Napalachchu, Raung Kong and Navi villages, all in Dharchula block in Pithoragarh district of Uttarakhand. The villagers use the route to migrate seasonally, and to transport all items for their basic needs from Dharchula town. The route is critical for the posts of the Indian army too. From the nearest roadhead at Najang, it can take two days to reach Bundi village, 16 kilometres away, while going to Kuti takes 5-6 days.

Traders and their ponies also travel on this route to cross over to China for the annual border trade from June to October, carrying coffee, dry fruits, textiles, grains and other goods, in exchange for woollen clothes, carpets and other items. More than 1,000 Indian pilgrims also use this route every year from June to September to cross over to China for the Kailash Mansarovar pilgrimage.

The seven villages of the Dharchula Assembly constituency are part of the state’s only Scheduled Caste seat of Almora (which became an SC seat in 2009) for the Lok Sabha elections. The seat comprises 14 assembly constituencies in four districts – Almora, Bageshwar, Champawat and Pithoragarh, with 12.54 lakh registered voters in 2014.

Bachi Singh Rawat of the Bharatiya Janata Party (BJP) held the seat for four terms from 1996 to 2009. Then Pradeep Tamta of the Congress won from here in 2009.

In the 2014 general election, it was a close battle between these two parties in Dharchula. Pradeep Tamta got 2,520 more votes in Dharchula than the BJP's Ajay Tamta. However, Ajay Tamta, the Minister of State for Textiles, won the constituency, overall. (The Tamtas were traditionally coppersmiths, a SC).  The two will be the main opponents again for the 2019 Lok Sabha elections. 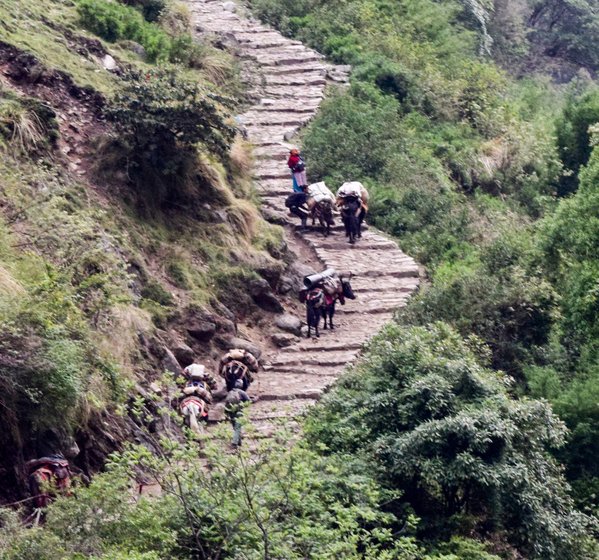 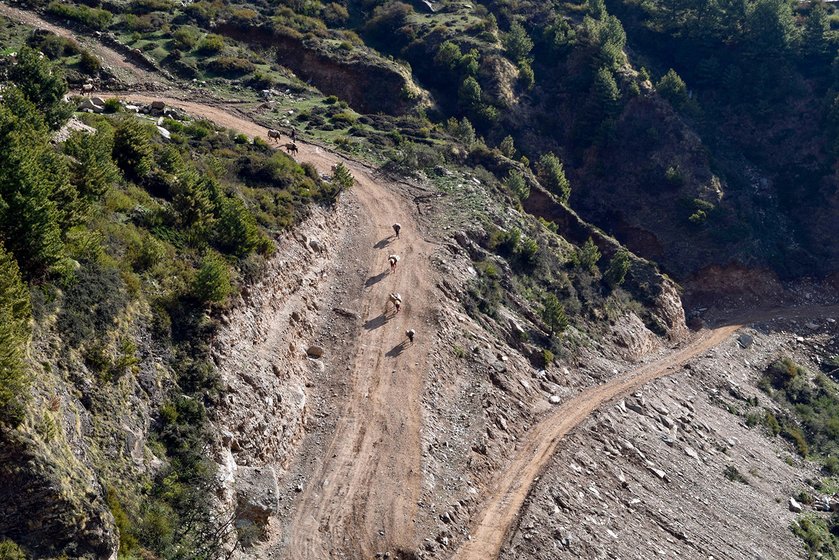 Left: Villagers and traders, the Indian army, pilgrims, all use this route. Right: The new levelled road constructed by the BRO covers only a portion of the full distance

Both candidates live in the lower Kumaon region – Ajay Tamta in Almora town, and Pradeep Tamta in Haldwani town of Nainital district (he is originally from Bageshwar district). These are located around 200 kilometres from Dharchula. From this distance, they are unable to hear what the people in the high-altitude villages are saying.

Work on the 95-kilometre motorable road began in 2003. When complete, it will go from Tawaghat (not far from Dharchula town) to Lipulekh Pass and connect the last security post on the India-China border in Vyas valley.

The first deadline for completion was 2008. The work was humongous, including cutting gigantic rocks, and the date of completion was postponed to 2012, then 2016 and 2018. The official proposed completion date is now 2022. The Comptroller and Auditor General has reportedly flagged the slow progress of roads built along the India-China border in its 2017 audit report, criticising the poor construction and huge costs.

So far, only 23 kilometres of the stretch from Tawaghat to Lakhanpur is a concrete road. The 2.5 kilometres from Lakhanpur to Najang has only recently been levelled into a dirt road. From Najang to Chiyalekh, a distance of 20 kilometres, construction is in process. The mountains need to be cut. From Chiyalekh to Kuti, the mountains have been cut, the land has been levelled, allowing BRO trucks to ply. Another five kilometres remains pending from Lipulekh Pass towards Navi Dang. (These details have been verified from the sub-divisional magistrate's office in Dharchula.) 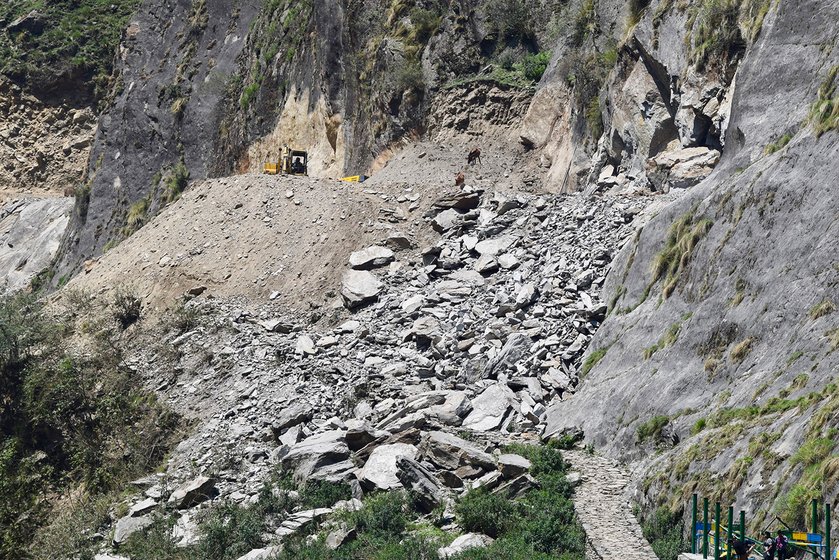 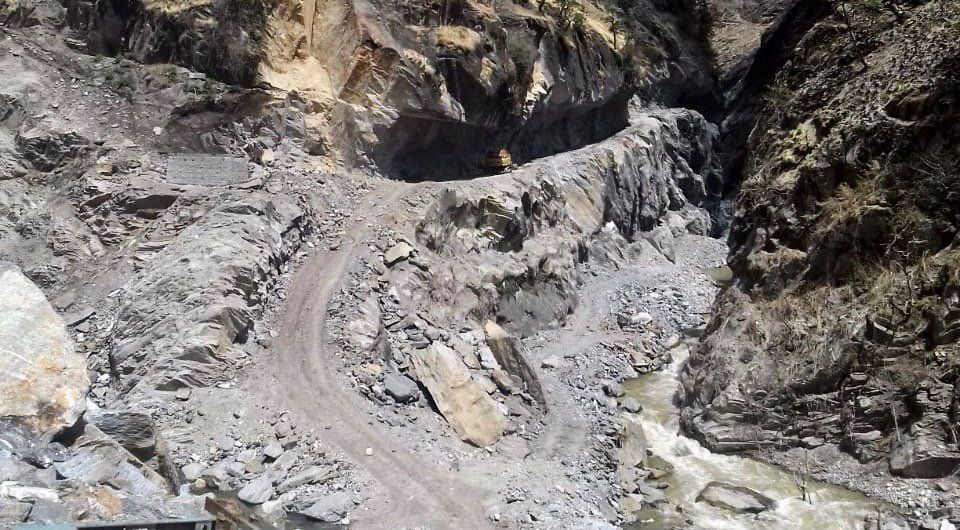 The walking route (left) disappeared under construction debris when the road, now cleared and levelled (right) was being built in Najang

Although BRO trucks now ply on the levelled portions of the road, people stagger along the rest of the route between Dharchula and their villages. Jiwan Singh Ronkaly, a 75-year-old border trader from Raung Kong village, who sells jaggery and coffee, among other items,  makes this difficult journey with his goods five times a year. “I have lost countless ponies along with my goods,” he says. “They [the BRO] blast the rocks with dynamite; it breaks the boulders in such a way that all our walking routes disappear under the debris. And with the rains everything washes away.”

The villagers are then forced to climb boulders and cross streams with strong currents by holding ropes and walking on tree logs. “But the government doesn’t care for us,” Ronkaly adds, angrily.  “And I am now worried how I’ll carry my goods because [with further dynamiting] the route might be completely broken in the 2019 season.”

People of the villages along this route say they will vote for the party that will complete this road. They are sceptical if any government is capable of completing a project of this scale. “The speed and performance of the BRO has not met our expectations. Whichever party is there, the government has proved to be inefficient,” says Laxman Singh Kutiyal, 50, who runs a homestay for pilgrims in Kuti village. 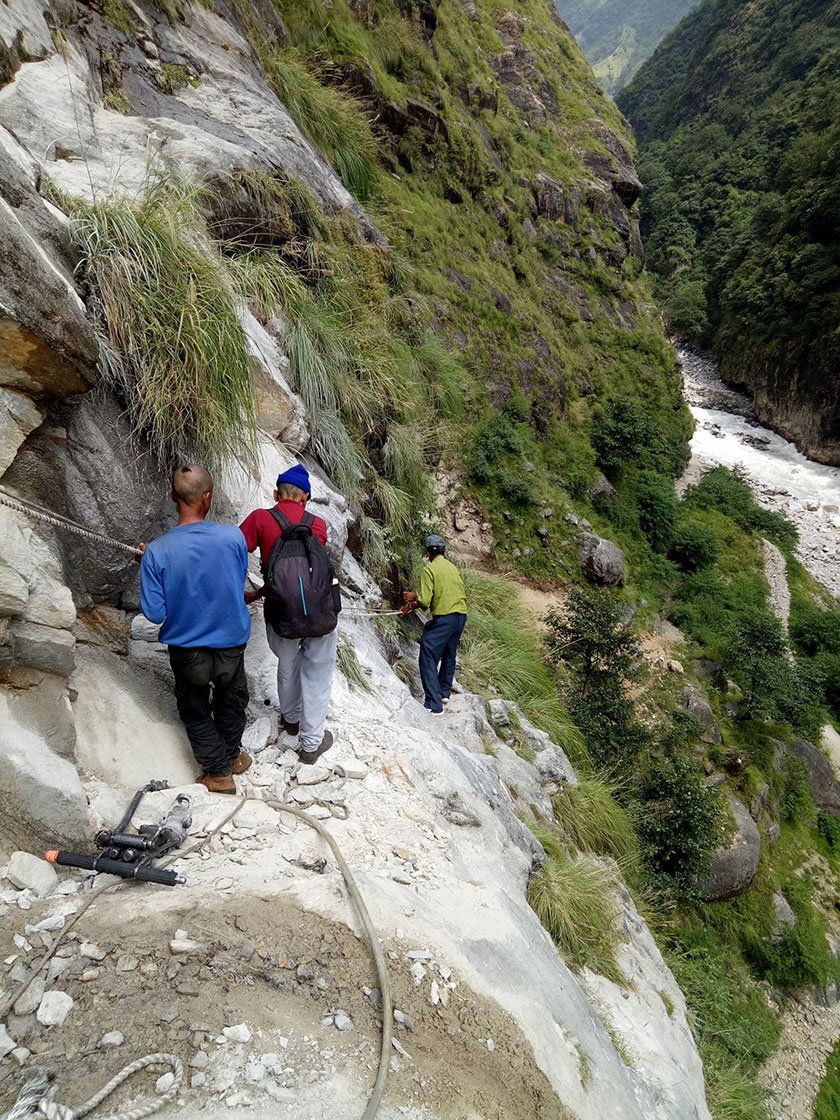 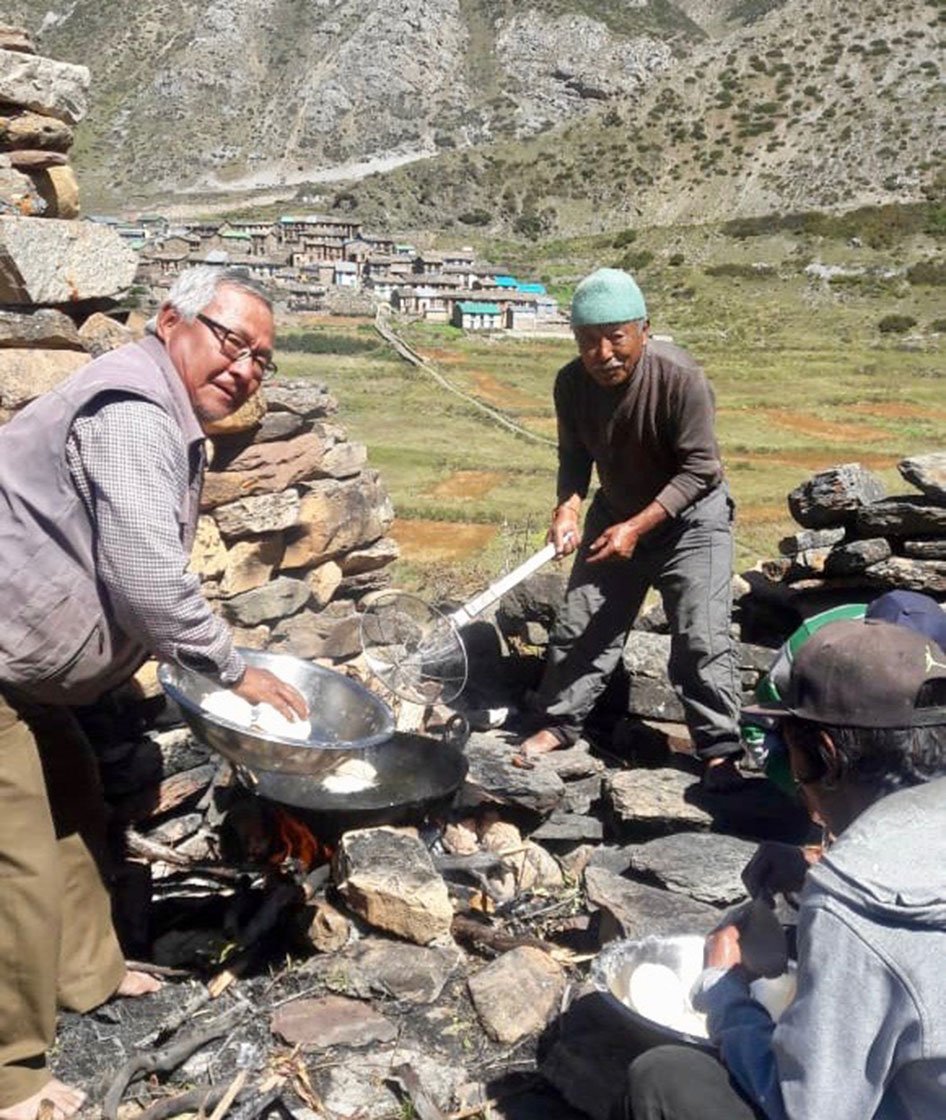 Left: A landslide in August 2017 forced villagers to use ropes for some dangerous stretches. Right: Diwan Singh Kutiyal (on the left) and others near Kuti village

Many of the villagers here say no political party is different, but point out that the present BJP government refused to support them during a disaster. In August 2017, nine people died and 18 went missing (including six army jawans) after a landslide hit at two different places on the route.

“We requested the district administration to arrange for helicopters [during that time] for senior citizens who could not walk along the dangerous route. We were stuck in Gunji village, about 50 kilometres from the roadhead. But helicopters flew in for Kailash Manasrovar yatris , not for villagers. When elections come, the political parties send greetings to even dogs, but forget all our woes when they are elected,” says Ronkaly. He adds that he suffered a loss of Rs. 5 lakhs when the landslide took away his ponies along with his goods. The government hasn’t reimbursed his losses.

This was not a one-time incident. In October 2018, when villagers were returning to their winter homes in Dharchula, the rains destroyed large tracts of the mule route. The government again turned down their request for a helicopter service. “We had to travel to Dharchula through Nepal [crossing over the Kali river], walk for about 20 kilometres more than when we travel through India [and circle back to India],” says Diwan Singh Kutiyal, a retired government employee and resident of Kuti village.

In addition to the road, the villagers are angry that the BJP government has reduced their allotment of rice under the public distribution scheme

Watch video: The long and winding 'road' to Elections 2019

In addition to the road, the villagers are angry that the BJP government has reduced their allotment of rice under the public distribution scheme (PDS). The high-altitude villages don’t grow rice and wheat, and depend on the monthly rations that are brought to a government storage facility in Gunji village. But since November 2017, each family has been getting only 2.5 kilos of rice a month instead of 10 kilos (though the five kilos of wheat per moth remains unchanged). The rest of the subsidy – all of Rs. 75 – is credited as ‘direct benefit transfer’ to the bank accounts of the ration card owner. But, says Diwan Singh, he hasn’t received any cash transfer since this scheme started. “In the plains there’s a shop in every neighbourhood. In our villages, there is no such thing. Moreover, even if we get the cash, what will we do with it if there’s no food to buy?” he asks.

During natural disasters, all supplies to the villages stop, including PDS rations. In October 2018, when the mule route was blocked and rations did not reach the villages, the villagers transported Chinese grains through Nepal.

Often, the price of an item, by the time it reaches Kuti, increases threefold due to the transportation costs. “One litre of cooking oil costs Rs. 200 in the upper altitude villages. However, during times of natural disaster, when the road is blocked even for the mules to transport items, the price increases by five times. A packet of salt can cost Rs. 100. Which government will take care of these needs?” asks Diwan Singh.

The residents of Vyas valley hope that a Congress government will be better. But they are not optimistic, considering past records. “The Congress will perhaps at least increase the ration quota and offer us a helicopter service during natural disasters, if not anything else,” says Ronkaly. “We are closer to China and Nepal than Delhi in terms of distance. Our voices don’t reach the country’s capital. Often, China and Nepal have helped us with food, telephone facilities and work. If our own government denies us our basic rights, we have nothing else to say.”