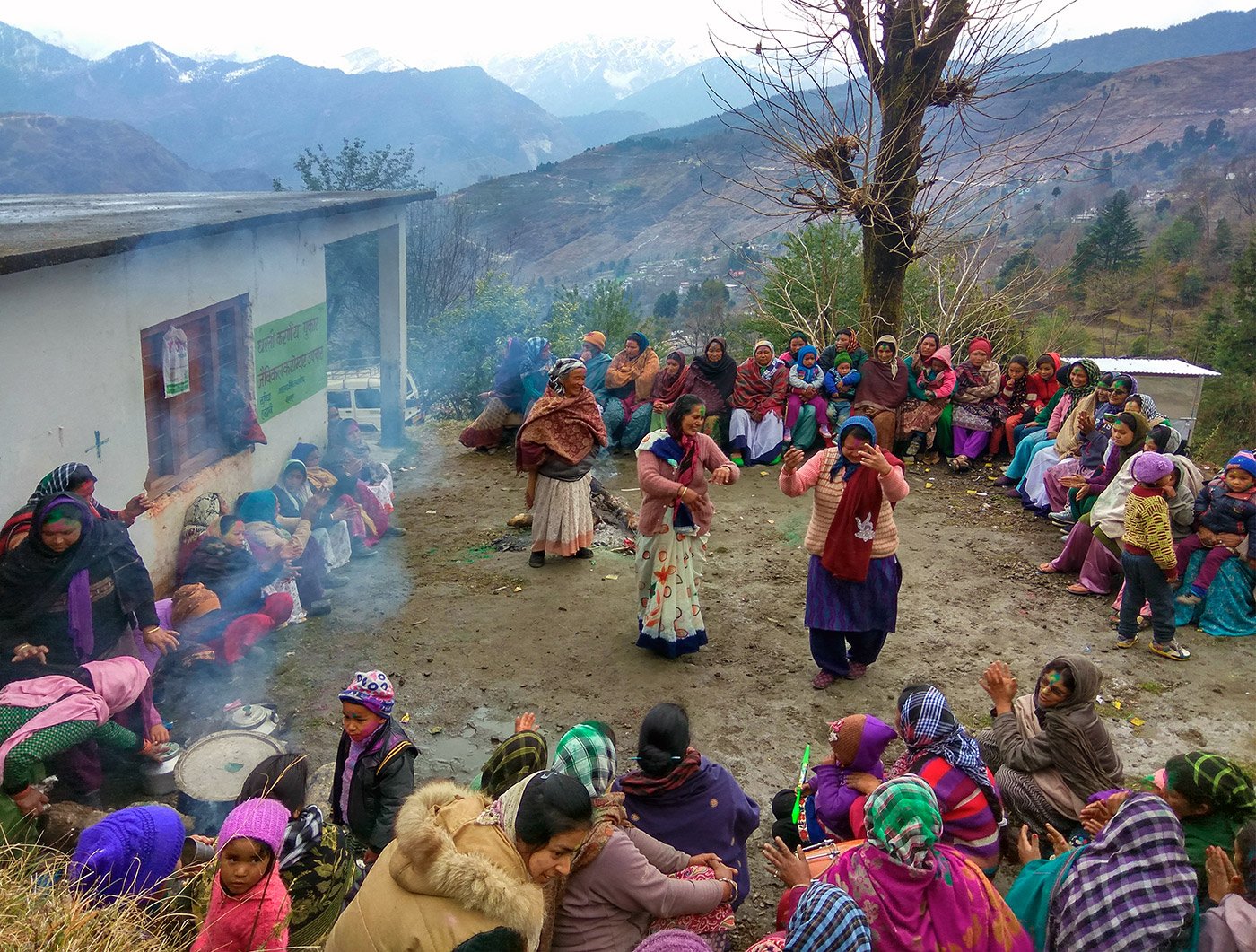 In the villages of Uttarakhand's Kumaon region, Holi festivities are a time for women to dance and let their songs echo amid the mountains. A photo story for a PARI series on International Women’s Day

On a cold afternoon in March, women’s voices reverberate in the foothills of the Panchachuli peaks. It has rained in the morning, and the sky is still overcast. As I draw closer to the panchayat office of Sarmoli village of Munsiari block in Pithoragarh district, the rhythm of the dholak becomes louder. As soon as I cross a mountain bend, I see dozens of women moving in a circle and singing songs of Holi under a wide open sky, in the shadows of the Himalayas.

In the Kumaon region of Uttarakhand, Holi, which began on March 8 this year, is more than just about colours – it is a festival of songs and music, of rhythm and melody. The region celebrates different forms of Holi, all of them musical. It is a time when women as well as men transform into melodious Holiyars – those who sing songs of Holi.

Gatherings ( baithaks ) called ‘Baithki Holi’ are popular across the towns and villages of Kumaon. Women have baithaks in their homes. They sing songs in Hindi, Brajbhasha, Awadhi and Kumaoni, to the accompaniment of the harmonium, tabla and drums.

“This is the time when we laugh, have fun, sing loudly and dance. Other times, we remain busy with our farming, children and cattle. Through these songs, we also make fun of each other or speak of scandals of the village. Unless you see the dancing, you won’t believe these are the same women who work so hard in the hills with their face down,” says Sundari Lachpal of Sarmoli.

Baithki Holi is said to date back to the mid-19th century, when renowned musician Ustad Amanullah Khan from Rampur district in Uttar Pradesh introduced it to Almora. “It is said that around [the year] 1850, Khan came to Almora and initiated classical music here,” says Naveen Bisht, a Holiyar in Almora. “But even people with no knowledge of Hindustani classical music can learn and sings songs of Holi, which is why the tradition of Holiyar is still alive.”

According to the Hindu calendar, Holi in Kumaon starts in December, on the first day of the month of Paush. But celebrations really pick up only in March, a week before Dhaulendi, or the day of Holi with colours. Around this time, Baithki Holi transforms into Khadi Holi – standing and dancing to celebrate the advent of spring. In some villages, the women visit each house in the village and dance to the songs of Holi.

Then there is Mahila Holi, also celebrated exclusively by women in homes and temples a week before the day of Holi. They gather, dance and sing songs to the gods, to Radha-Krishna, Ganesha and Shiva.

In early March, I attended three Mahila Holi celebrations in the villages of Munsiari block of Pithoragarh district. This photo essay documents the festivities in chilly Munsiari (‘place of snow’) – located 2,270 metres above sea level – and records the songs of Holi sung by Kumaoni women. 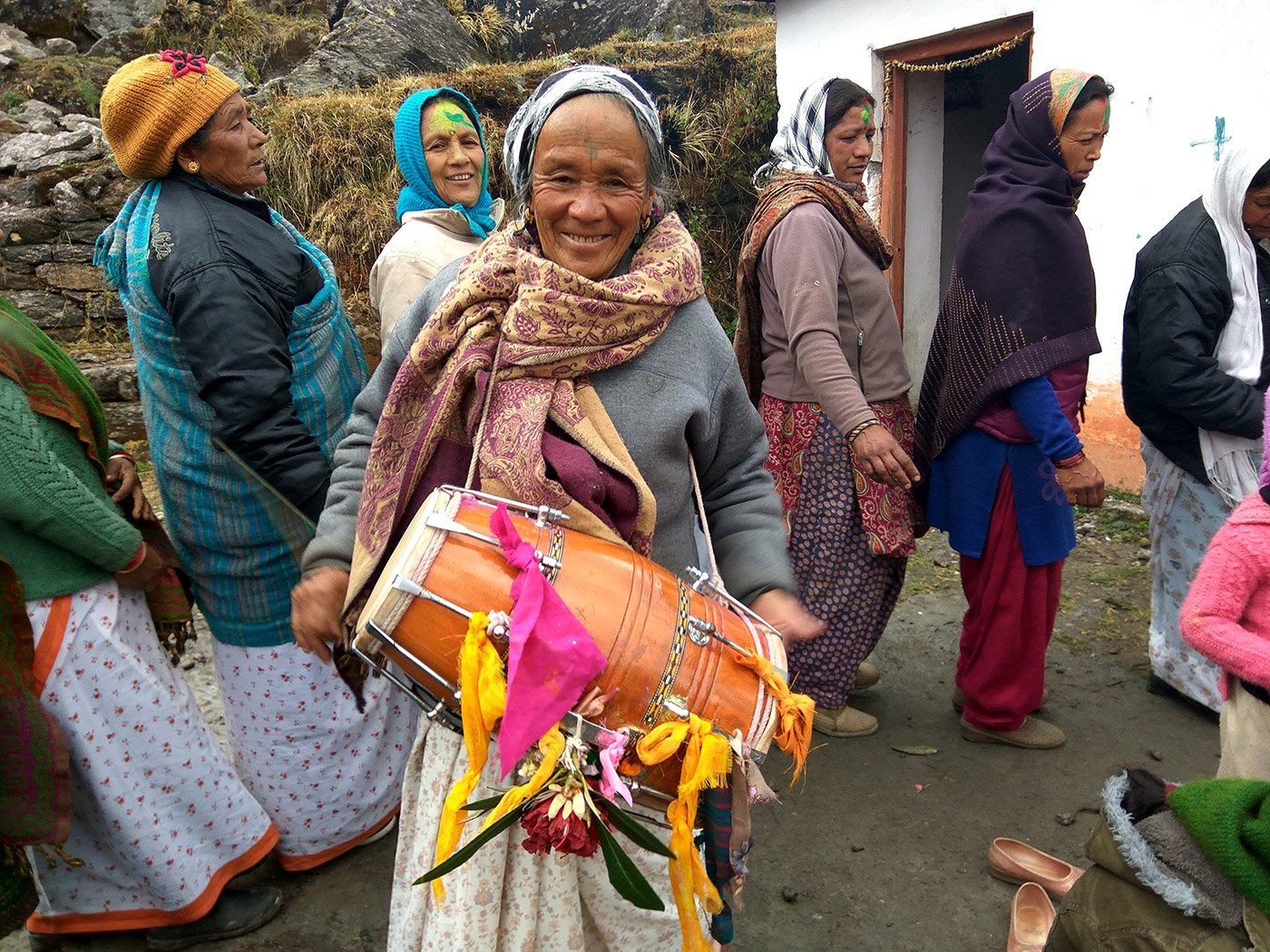 Sundari Lachpal beats the dholak , while other women move around in circles and sing songs of Holi outside the panchayat office in Sarmoli. The ribbons tied to the drum are a homage to Ishta Devta, a deity 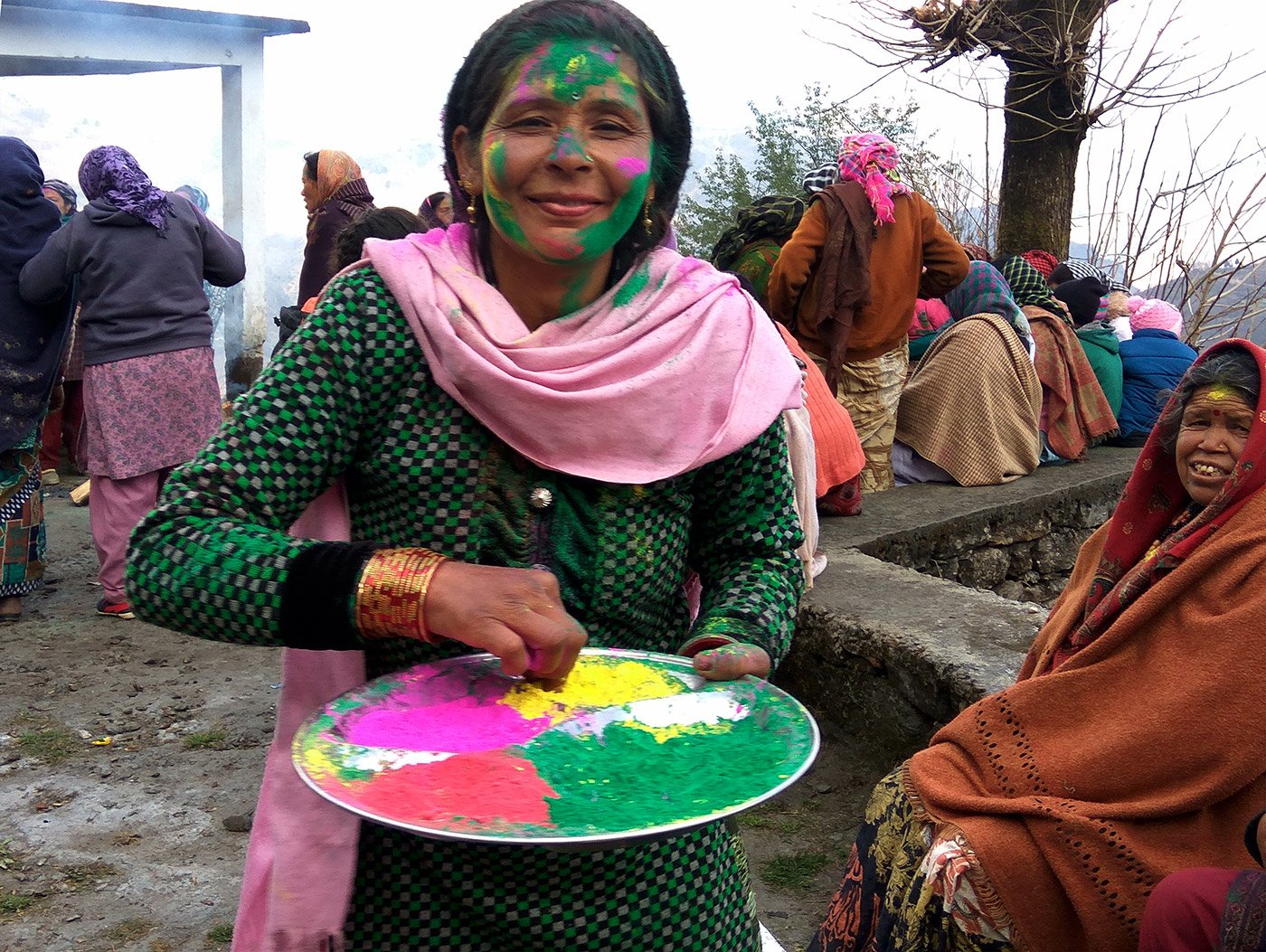 As soon as women arrive at the panchayat office, others apply gulal on their forehead – as the celebrations progress, so does the spread of gulal

Watch video: The women of Sarmoli village sing a song of Holi while moving around in a circle. It’s still cold in the mountains, and a fire burns inside the circle to add even more warmth to the festivities

Heera Devi takes the drum from Sundari Lachpal. The women take turns to dance, while Bhavesh Singh, 8, plays the cymbals with enthusiasm. Mahila Holi continues in Sarmoli for five days

Steaming hot tea for around 50 women is being made on the fire. Pakodas, halwa , chips and tea are served to everyone. Groups of people in the different hamlets take turns to arrange the food for a day as the Mahila Holi celebrations pass on to other hamlets. “ The celebrations are organised by the women – in one part of the village one day, in another part the next day and it goes on, so that everyone has a chance to host Holi. The finances are also shared equally by everyone,” says Manju Tripathi of Ghorpatta Malla village

Watch video: Rajni Joshi of Ghorpatta Malla village dances to a song about Holi in Mathura

Women of Ghorpatta Malla celebrate Baithki Holi on March 9. They sing songs about Radha-Krishna, Shiv and Ganesh from a book of Holi songs

The dholak and tambourine are essential parts of a Kumaoni Holi

Khadi Holi comes after Baithki Holi – here, Manju Tripathi, the host of the day, dances to melodies of Holi, as does seven-year old Chetna Singh

In Sarmoli, the women of Darkot, Nansem, Naya Basti, Sarmoli and Sankdhura huddle together inside the one-room office of Maati Sangathan, a network of women that organises homestays to celebrate Mahila Holi. It has just started to snow outside 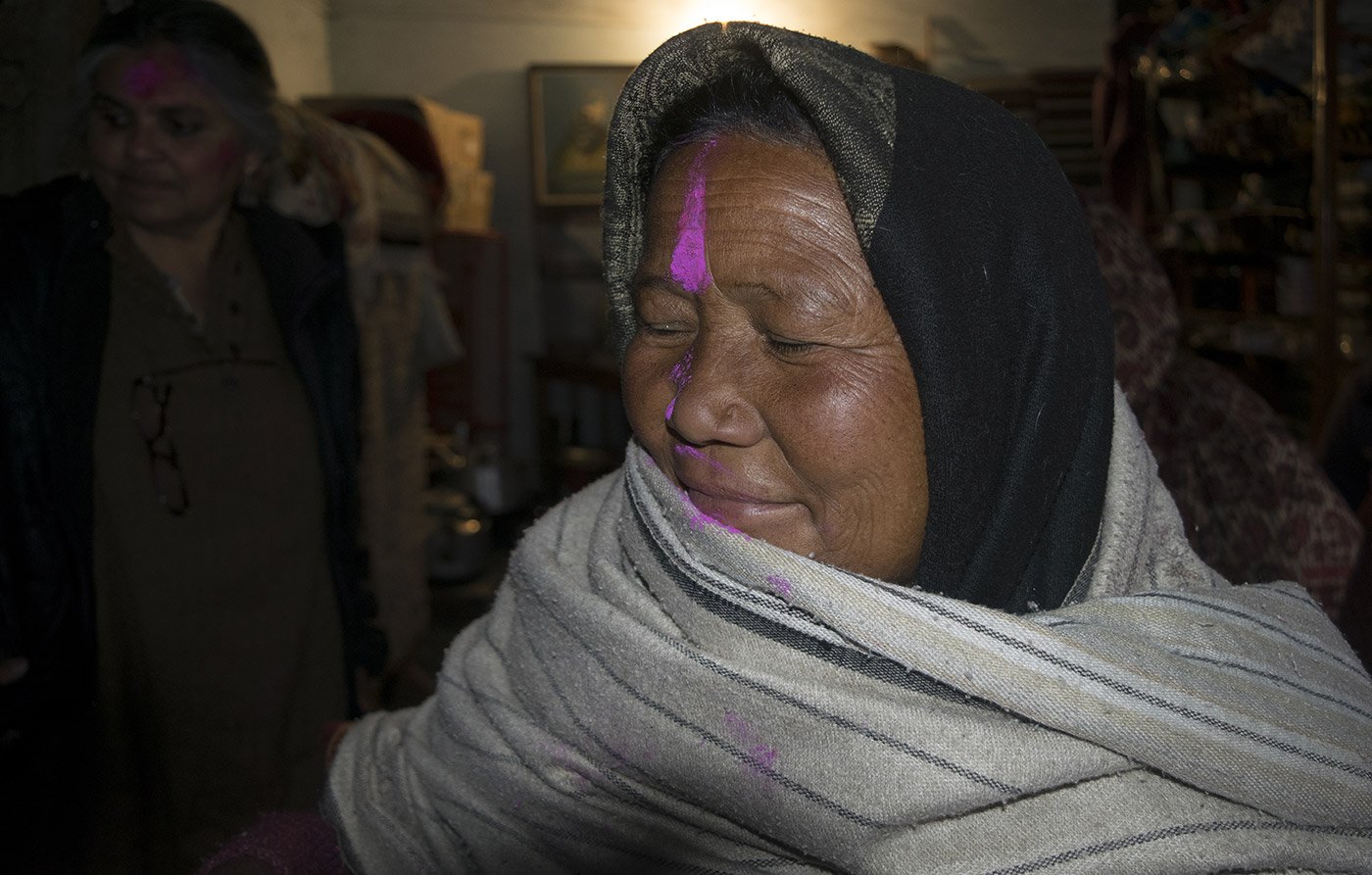 The women apply gulal to each other, while many others begin to arrive regardless of the rain and snow 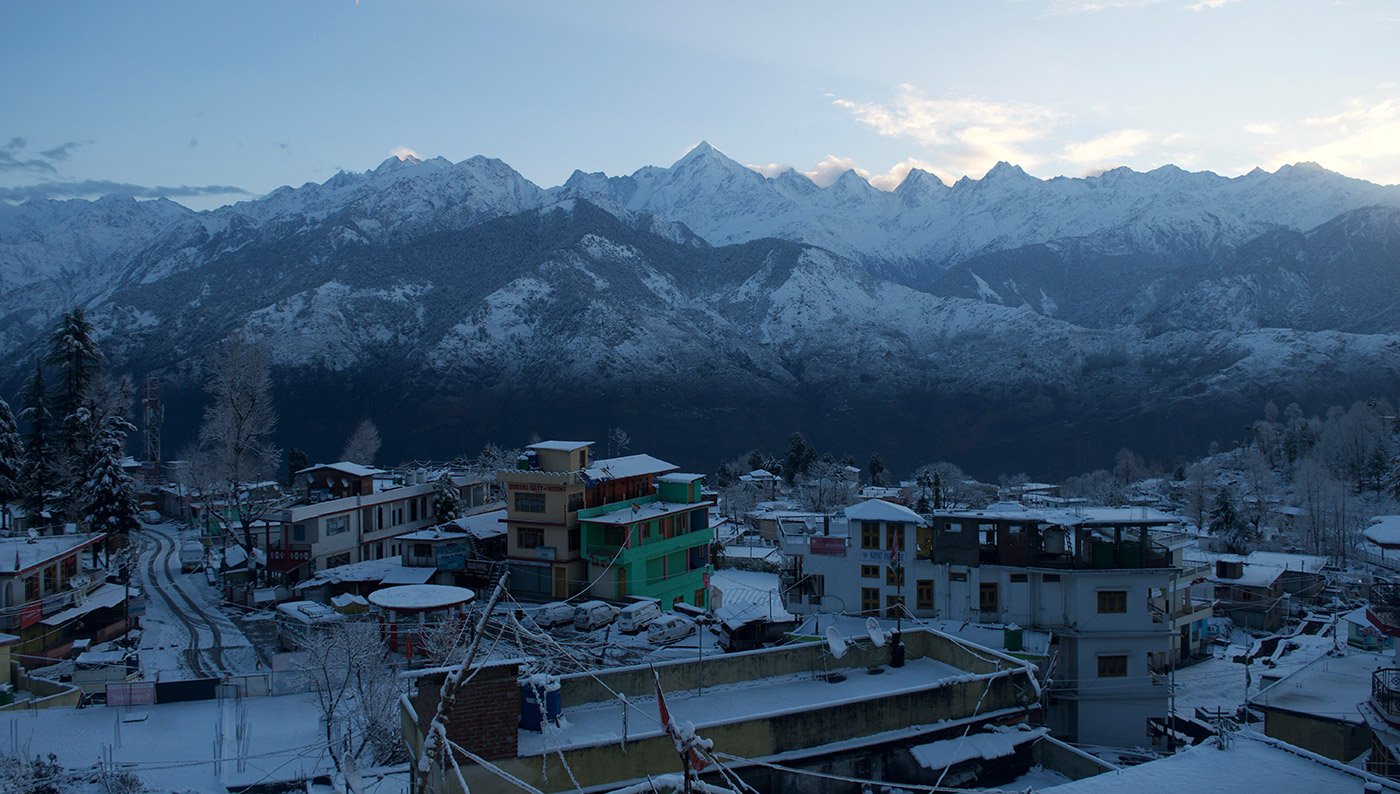 On March 10, the villages of Munsiari are covered in snow, while the ivory peaks of Panchachuli watch over the celebrations as the melodies continue to reverberate amid the  mountains