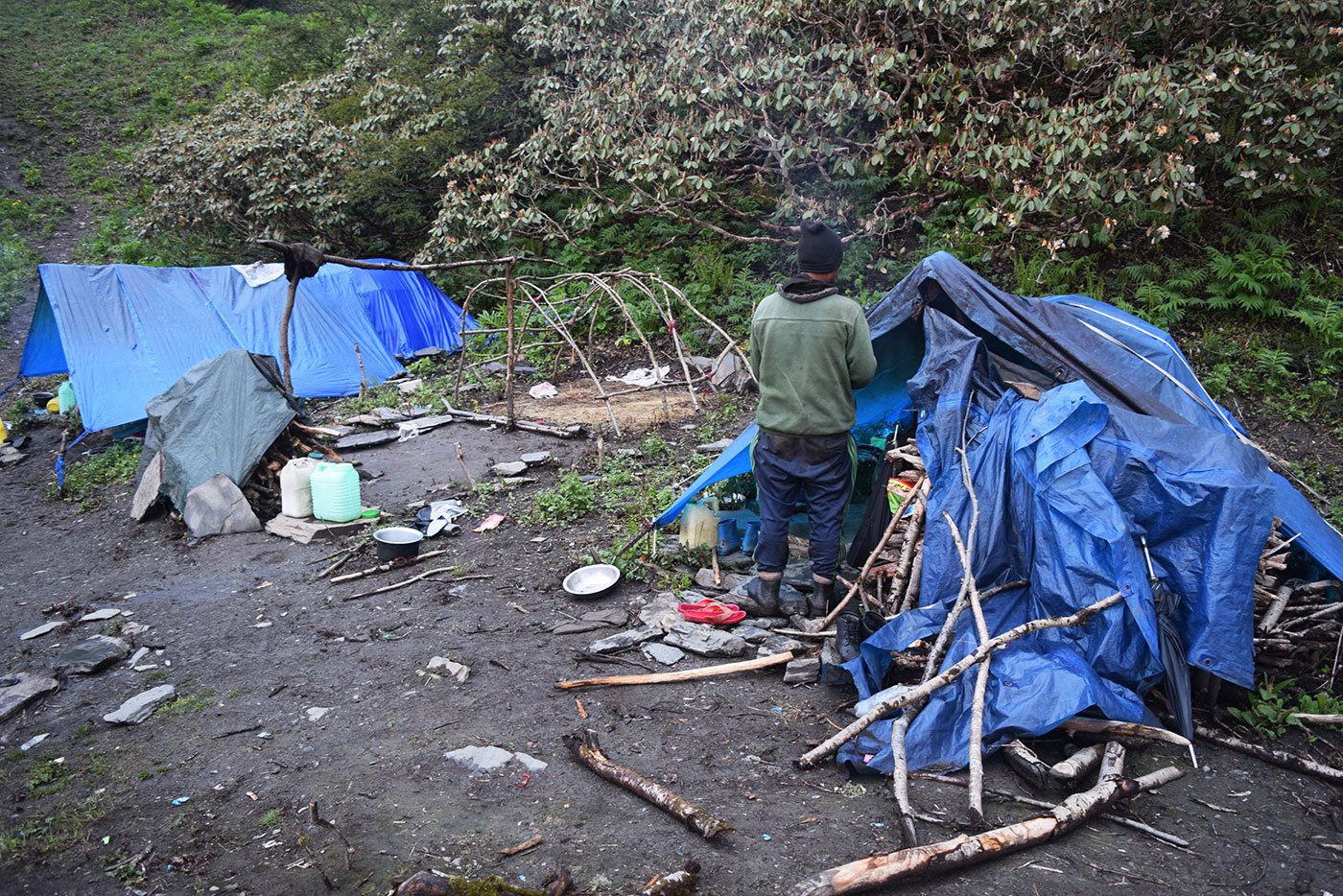 The 'gold rush' in Pithoragarh's mountains

A lucrative illegal trade in the caterpillar fungus has brought some prosperity to the high-altitude villages of Uttarakhand, but it has also led to disputes and a negative ecological impact on the alpine grasslands

The names of all persons quoted here, except the government official, have been changed to protect their identities; for the same reason, their villages too have not been named. This is part two of a two-part story.

“ Keeda jadi has transformed lives here,” Sunil Singh says, while driving the taxi in which we are travelling. The 23-year-old has been plying the vehicle for two years, carrying passengers from nearby villages to Dharchula, where they go to school or college, the market or healthcare centre. Dharchula block is in Pithoragarh district of Uttarakhand, just a few metres from the India-Nepal border.

Sunil purchased the taxi, a Bolero, with the Rs. 3.5 lakhs he saved from selling the expensive keeda jadi fungus, and by taking a bank loan. He has been going with his family to pick the fungus since he was around eight years old, and is repaying the loan from those earnings.

The ‘caterpillar fungus’ or keeda jadi grows in the alpine meadows of the Tibetan Plateau at an altitude of 3,500 to 5,000 metres. Known as the ‘Himalayan Viagra’ for its aphrodisiacal properties, the fungus – called yarsagumba in China – is also a valued ingredient in traditional Chinese medicine. One kilo of top-grade keeda jadi can sometimes fetch as much as Rs. 12 lakhs in an illegal cross-border trade. Most of the fungus harvested and sold in Uttarakhand is smuggled by agents to Nepal and then to China.

The fungus harvesting season in Uttarakhand’s high-altitude border districts of Pithoragarh and Chamoli starts in early May and ends by the middle or end of June, with the arrival of the monsoon. Entire families move to the meadows, staying in tents for weeks, working long and arduous hours to collect the fungus. (See A fungus is financing families in Pithoragarh ) 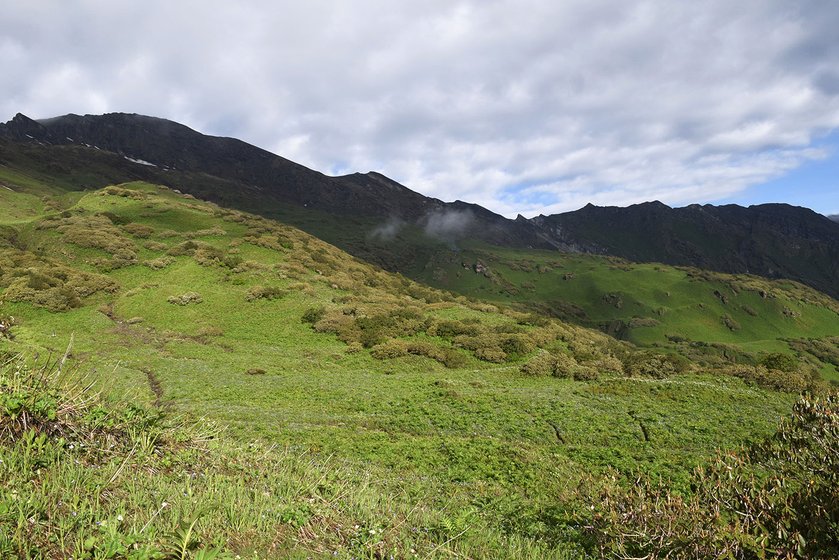 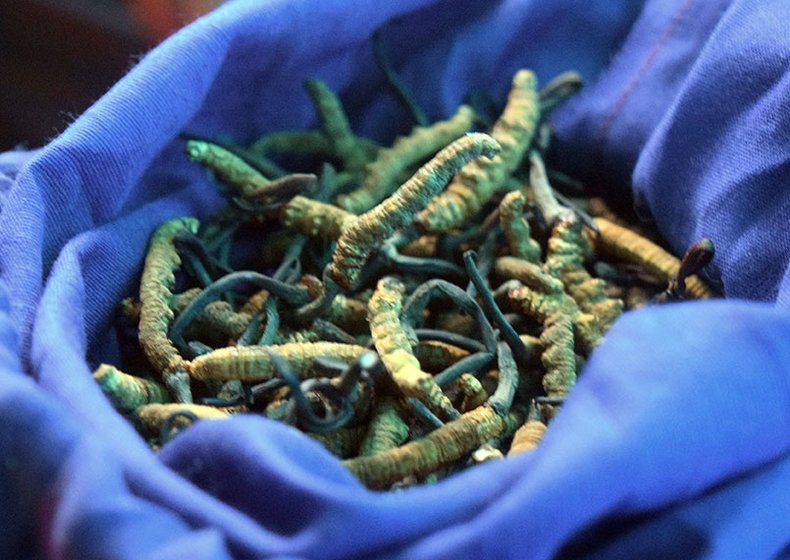 People from many villages spend May and June in alpine meadows (left), harvesting the fungus (right); it covers their family expenses for months afterwards

And they return with enough fungus to cover a chunk of the family’s expenses for a considerable period of time. “It depends on how many pieces of keeda jadi you pick. The earnings last for a few months for some families and provide sustenance for some for a year,” says Parvati Devi, who is from the same village as Sunil. “This business is risky and tough. But even educated people with college degrees have no employment here. So everyone is involved in this work.”

The agents or dealers usually arrive in the villages in the months of September-October to collect the fungus; they then use far-flung mountain routes to carry it across the border. “After we return with our collection, we dry it, clean it, preserve it and then protect it with our lives till the middlemen arrive. We live all year round on the earnings from keeda jadi . Without agriculture and jobs, it’s more precious to us than gold,” says Anil Singh, a harvester.

Before the villagers discovered the lucrative fungus, they depended on agriculture, daily wage labour or sheep-herding. But agriculture is not a viable option in this rugged landscape. “The land is not fertile; we mostly cultivate rajma and potatoes. If the harvest is good, and that is rare, we sell some of the produce. Usually we keep it for our own sustenance,” says Bhanu Singh. “The other option is manual labour through MGNREGA but that isn’t as profitable as collecting keeda jadi.”

Many also migrate in search of work. But because of the caterpillar fungus, many of the villagers who earlier left for the cities to work now head to the high altitude meadows of the Himalayas. 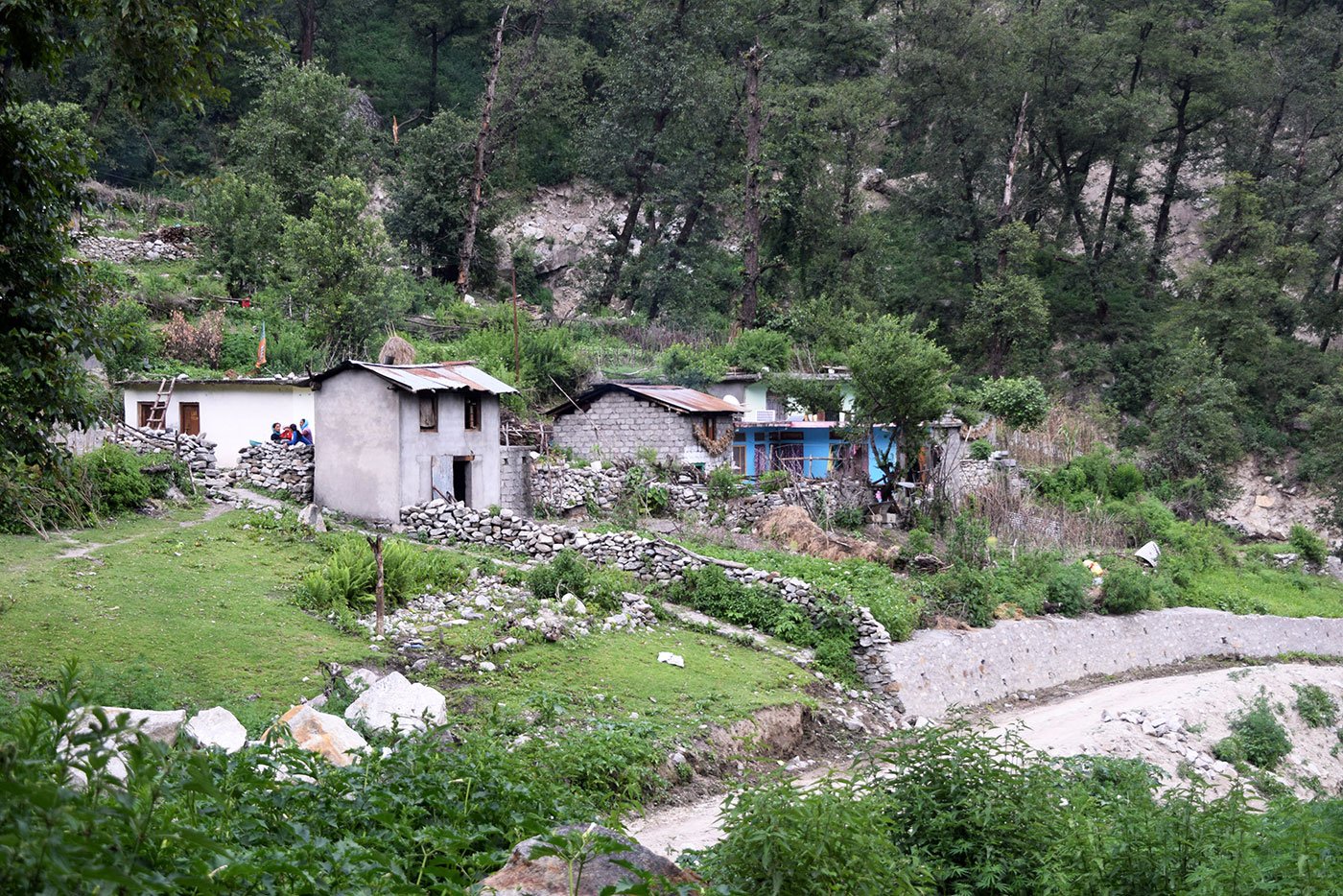 ' Keeda jadi has transformed lives here', Sunil Singh says. In his village, signs of modest prosperity driven by the fungus trade are everywhere

Young men like Sunil have purchased taxis to earn an income during the rest of the year. “I have been in the forest for only 16 days during this season, and I got 300 pieces,” he says. His collection will fetch him at least Rs. 45,000.  His friend Mannu Singh, who is also travelling with us, harvested 500 pieces. “I’m aiming for a minimum of Rs. 75,000,” Mannu smiles.

In Sunil’s village the signs of prosperity driven by the fungus trade are everywhere. New houses and shops have sprouted on the hillside. Many villagers carry expensive smartphones with Nepali SIM cards – Indian mobile networks rarely work here. “ Keeda jadi has increased our household income manifold and improved our economic condition. We can afford to have better food. We can even afford to travel to Dehradun and Delhi for education and medical care,” says 14-year-old Manoj Thapa. He alone picked 450 pieces of the fungus in the 2017 season.

I am told that a few young adults in the village have joined coaching classes in Dehradun for the civil service exams – keeda jadi funds are covering the fees. Many families from this region are from the Scheduled Tribes, and joining the civil services is a dream for many of them, made a little more possible by the reserved seats for STs. But it's a dream they could barely afford to train for until the keeda jadi trade took off.

In June 2013, when floodwaters from a glacier damaged agricultural land in the village, the villagers rebuilt their lives largely with fungus funds. “It was only possible due to keeda jadi ,” says Bhanu Singh, who used his fungus earnings for a lavish marriage ceremony for his elder daughter in 2016. He has also constructed an impressive house with three rooms.

'When too many families join the hunt in the same area, the collection of each family drops. But we don’t report the fights to the police because we will land up in jail'

Watch video: ‘If people had jobs, they wouldn’t have run after keeda jadi ’

But all this enthusiasm has a downside. In the last few years, violence and disputes have erupted between villages over accessing common pastures like the Satper meadow. “In common pastures, several families even from Haldwani and Lalkuan hunt for keeda jadi . So the harvest per family comes down and people fight over access to the meadows,” says Lal Singh.

“When too many families join the hunt in the same area, the collection of each family drops. But we don’t report the fights to the police because we will land up in jail,” adds Bhanu Singh. He and his family collected around 1,400 pieces of fungus last year at Satper and brought them back in old glass jars – the sale price was at least Rs. 2 lakhs.

The demand for yarsagumba reportedly shot up in 1993 when three Chinese athletes broke five world records at the Beijing National Games after regularly consuming a tonic apparently made from the fungus. In 1999, China classified the fungus as an endangered species. Soon after, the fungus-picking made its way to India. “In the [early] 2000s, we saw Tibetan khampas searching for the fungus in pastures on the Indian side. They said it could rarely be found in Tibetan territory any more. They searched unexplored Indian territory and asked us to help them,” says 41-year-old Krishna Singh. The market price at the time for the keeda jadi was modest. But by around 2007, the trade became lucrative, attracting many more harvesters.

But the fungus ‘gold rush’ across some 300 impoverished villages in Pithoragarh and Chamoli districts might be fading. Some research studies state that due to climate change and excessive harvesting, which has increased the footfall and human impact on the alpine grasslands, the fungus yield from the Tibetan Plateau has shrunk by 10-30 percent in the last three decades. 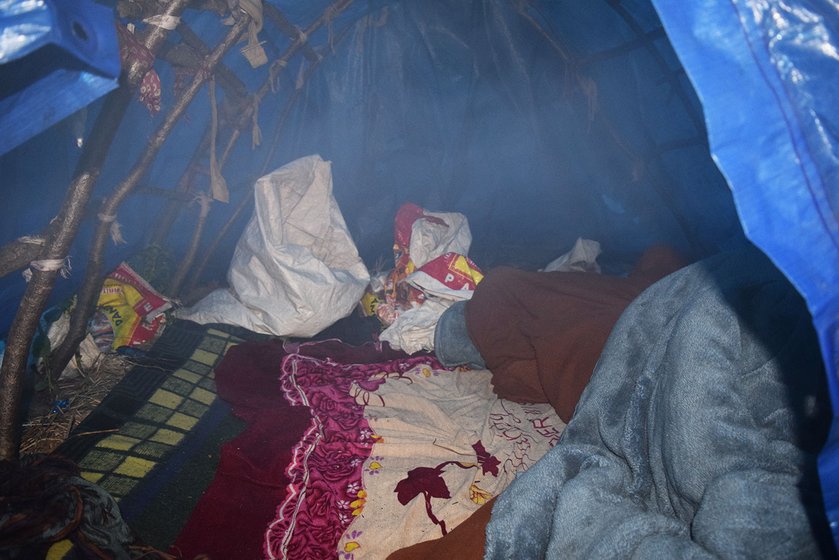 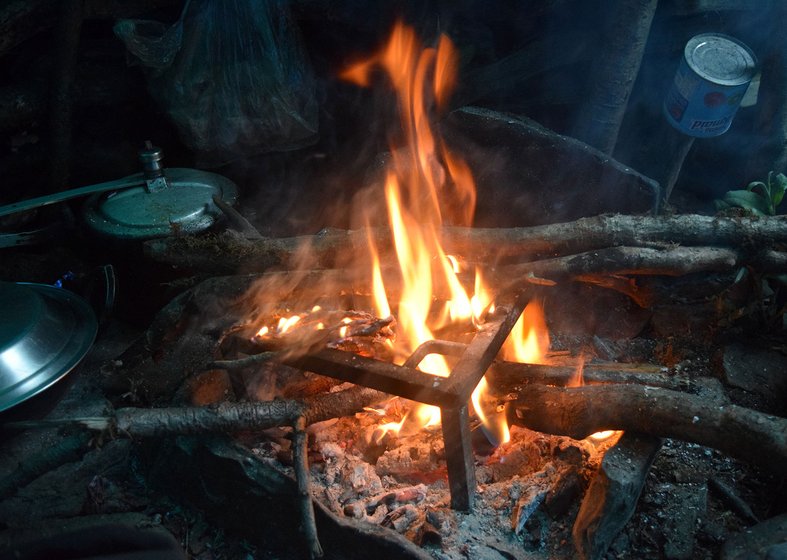 Living in the icy tents for weeks is not easy, nor is the daily harvesting. And in the long-term this is an unsustainable occupation

Just as the khampas had to look for newer pastures, the fungus harvesters of Uttarakhand are having to look further too. The villagers say the fungus can now only be found at higher altitudes, compared to easy pickings at lower heights a few years ago. “We don’t find as much keeda jadi as we used to 10 years ago,” says Lal Singh. “In a few more years, perhaps we won’t find any in the places we frequent right now. We will have to keep moving higher and higher.”

The Uttarakhand government is planning to try and regulate the trade and prevent over-exploitation of the fungus. Ranjan Mishra, the chief conservator of forest, Uttarakhand, says, “We have sent a new proposal to the  Centre. We can’t stop picking and selling of the fungus. What we can do is regulate it through well-framed policies so that both the state and people can benefit from it. ”

The new policy, Mishra says, proposes registering every harvester with the van panachayat (forest councils managed by village communities) or forest range office with their Aadhaar or voter identification card. The person will disclose the days he/she will spend collecting keeda jadi and in which particular area of the forest range. He/ she also has to disclose the amount of keeda jadi they have collected. “For every 100 gram, the forest department will charge a royalty of Rs. 1,000. The buyer is then free to sell it to van panchayats or any third party. It then becomes legal to sell it,” Mishra says.  “The alpine meadows are ecologically fragile. So when the policy comes into effect, we will know how much it is harvested in the state, and what's happening in the region.”

Meanwhile, the rising demand and the difficulties of finding the fungus have increased its market price several times in the past decade – only making it more attractive for the fungus-gatherers.