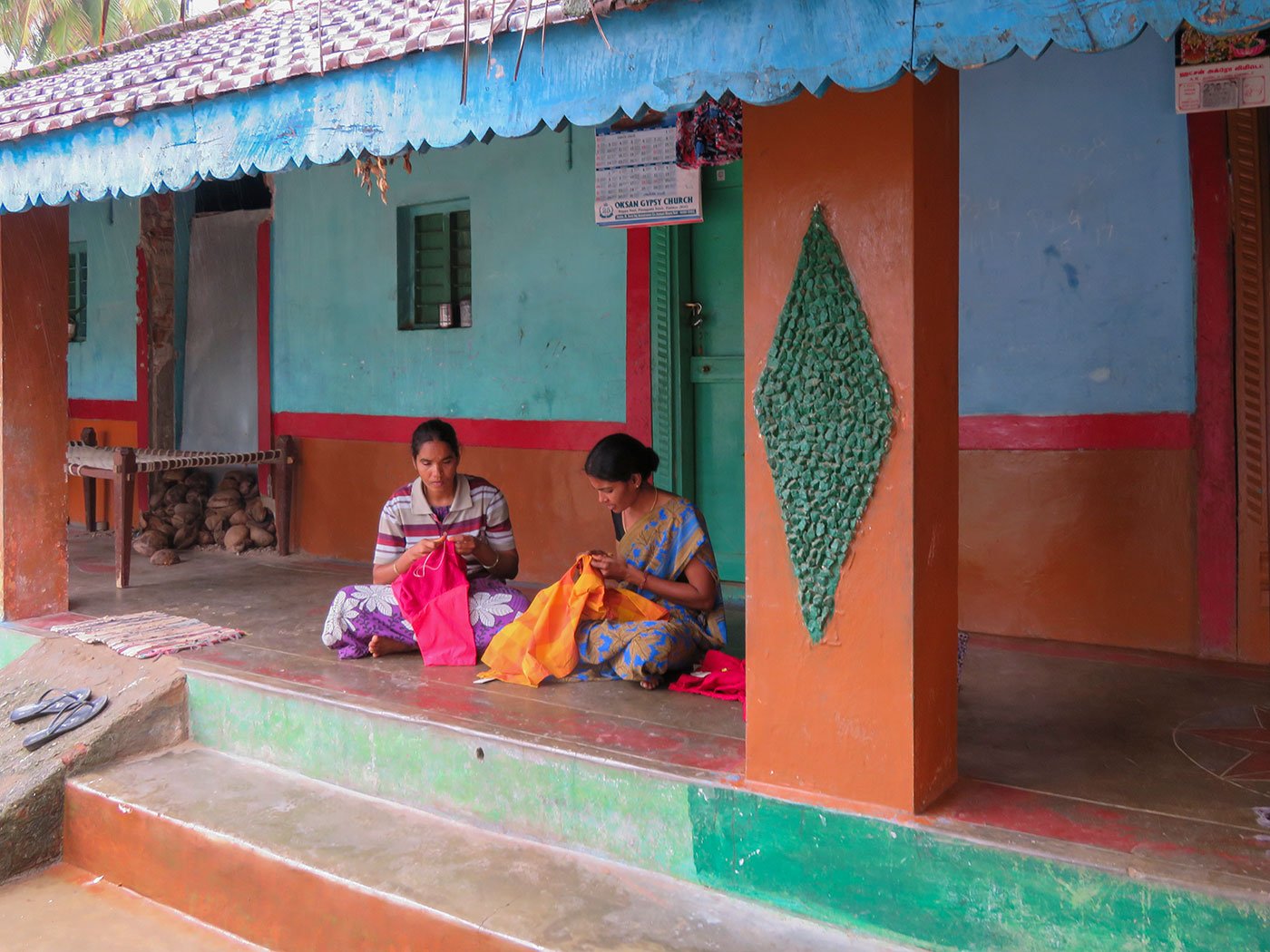 Tammigamal Kasimiya  peers through her spectacles as she fixes a tiny circular mirror onto a piece of cloth. “This sangli stitch is the most difficult because you have to stop the mirror from sliding,” she tells me in her home in Akkare Kaattu Tanda, one of the two Lambadi hamlets in Sittilingi valley of Dharmapuri district in Tamil Nadu .

For 12 years now, Tammigamal or ‘Gammi’, who is in her 60s, has helped avert another slide, a far more serious one. Along with her friend R. Neela, she has taught young women of their community ghater – Lambadi embroidery – to try and prevent this skill from sliding out of collective memory. What’s more, the steady, additional income earned from doing the embroidery has curbed the women’s need for migration.

Lambadi women usually migrate to the textile mills of Tiruppur, 200 kilometres south of Sittilingi, or to construction sites. The men in the community mostly seek employment in Kerala for construction and tree-cutting. On average, the earnings of the migrant workers, men as well as women, range from Rs. 7,000 to Rs. 15,000 a month.

In Tamil Nadu, the Lambadis (listed as a Backward Caste in the state) mainly live in villages in Dharmapuri and Tiruvannamalai districts. In Sittilingi, the village panchayat officer says there are 924 Lambadis (also known as Banjaras in other states).  Most Lambadis in Sittilingi have one or two acres of land, where their subsistence farming depends on rainfall. Over the last 30 years, a growing shift towards water-intensive cash crops like sugarcane and paddy, and inadequate rain, have created an increasing need for cash, forcing migration for periods ranging from 15 days to a year.

“Migration is a fact of life here, but at least in those homes where the women earn from ghater, it has stopped,” points out 35-year-old Thaikulam. 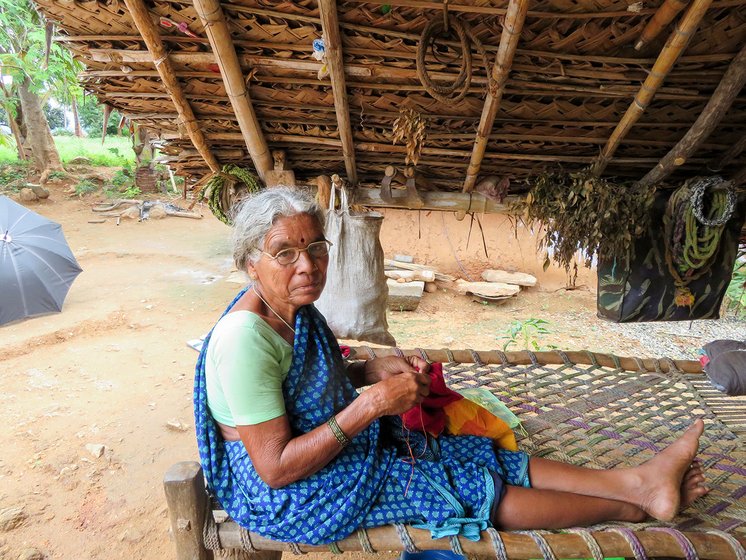 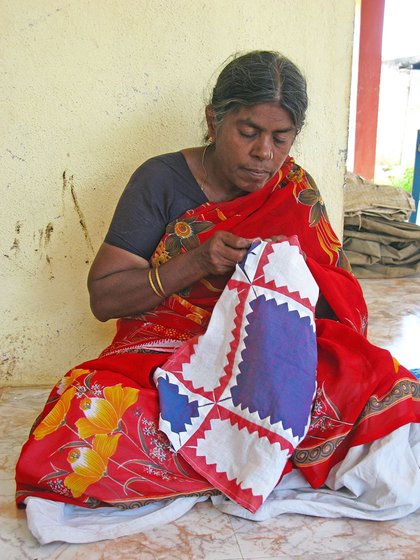 Tammigamal Kasimiya (left) and R. Neela (right) have taught young women in their hamlet traditional embroidery to prevent this skill from vanishing

In the two tandas in Sittilingi, other than two or three women over the age of 70,  Lambadi women (and men too) had stopped wearing their traditional clothes, except on ceremonial occasions. This happened gradually, over 30-40 years. Thaikulam explains: “We didn’t want to look different. We felt awkward. So we moved to dressing the way we saw villagers nearby dress.”

As women in the community stopped wearing traditional clothes, the cultural need for embroidering fell. A. Ramani, a Lambadi artisan in her 30s, and one of Gammi’s early students, says, “My grandmother did some ghater , but my mother never picked up a needle and thread, not even for her own wedding dress.”

Lambadi women’s traditional attire is heavily embroidered. The petiya is a single- colour satiny skirt, a choli or blouse and a scarf or dupatta. Usually, only the waist of the skirt and the blouse are closely embroidered, with multi-coloured cotton threads, into a variety of delicate stitches in geometric patterns. Men in the community though wear white, rough cotton shirts and dhotis , with no embroidery.

While the skill of embroidery languished in Ramani’s mother’s generation, traditional garments were still needed in most families for ceremonial occasions like weddings. And most of these garments had become torn or damaged. “Women would come to us and we would rip out the heavily embroidered parts and affix new [plain] cloth to it,” says Gammi. This became a slim thread that retained the community’s ties to the craft. It slowly grew into a revival. 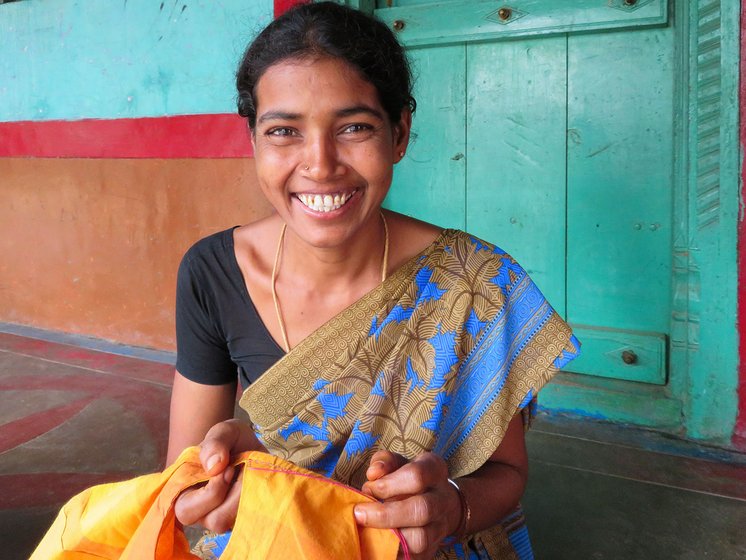 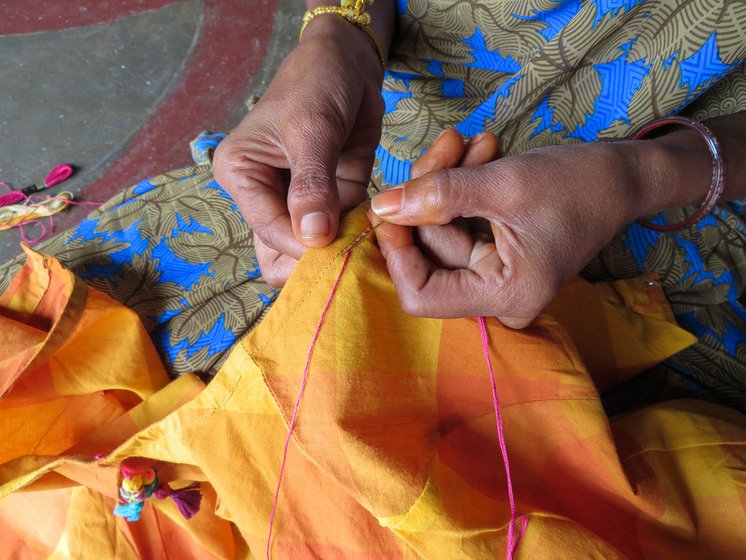 A. Ramani, a Lambadi artisan in her 30s, was one of Gammi’s early students. 'My first earning was from a paan , eight lines of eight each', she recalls, proudly

In Sittilingi, 60 Lambadi women artisans now practise embroidery, and all of them are members of the Porgai Artisans Association, owned and operated by them. “In our language, ‘ porgai ’ means pride and dignity. Pride in our craft and dignity from the income we get,” explains Thaikulam, who was recently elected president of the Association. “It is as though we have got our voices back. Now we have a sense of solidarity and an outlet for our creativity.”

Porgai’s first collective stitch was set in motion by a local doctor, Lalitha Regi. She had moved to Sittilingi shortly after graduating from Kerala 30 years ago to set up the Tribal Health Initiative (THI) with her husband Regi, also a medical doctor. Lambadi women were among her patients and she noticed two seemingly disparate facts: only older women were wearing the heavily embroidered traditional dress and many of her patients regularly migrated out of the valley for short periods of time to supplement their farm income, returning with infectious diseases contracted in closed working spaces and compromises in their diet. “I thought if I could persuade young women to start embroidering as a means to earn, the need for migration would come down,” explains Lalitha, a general practitioner and gynaecologist.

Gammi and Neela were the only two women in the Lambadi community who still knew the craft. Gammi remembers immediately dismissing the idea: “Who will buy?” she asked incredulously. “Even our own people are not wearing!” But Lalitha was convinced and ‘borrowed’ Rs. 1 lakh from THI to get things moving. (Later THI  donated the money to Porgai.)

Word spread, and 10 young women signed up in 2006. Gammi and Neela began teaching the neat lines and tight stitches that are the trademark of this craft.  Ramani remembers: “We were told not to disturb our teachers in their daily work, so we would sit with them only when they were free. It took me about a month to learn a stitch well.” 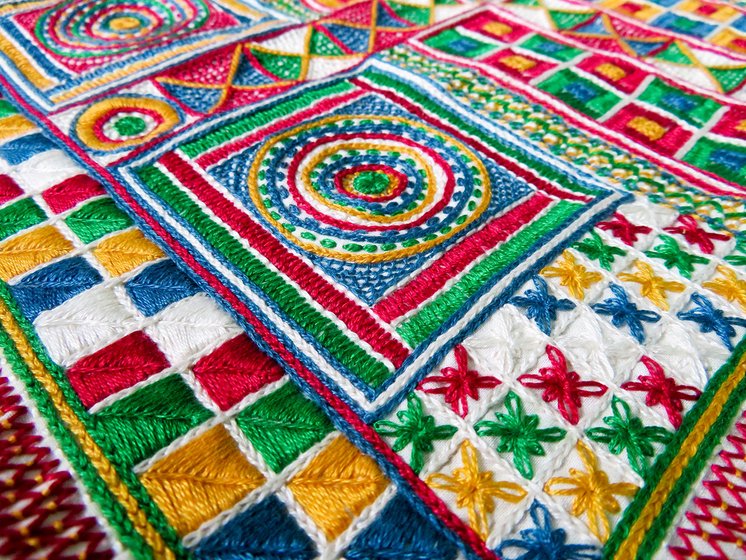 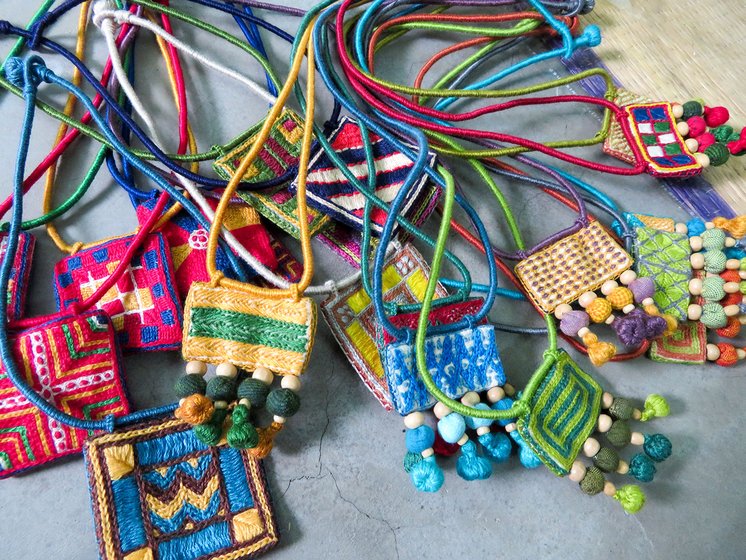 Lambadi embroidery has many distinctly different types of stitches: jaali (mesh), potah bandhan vela (cutting a line through the middle) and eksuigaad (a single running stitch). It is used in motifs, border patterns, edgings, hemming and fillers, and is similar yet distinct from the shisha embroidery of Gujarat and Rajasthan from where the community is said to have originated.

In six months Ramani and the other students were ready to start working on Porgai-commissioned work. But marketing and sales were slow and it was three years before Porgai could clear, in 2009, the backlog of wages owed to its artisans and begin paying on time.

“My first earning was from a paan , eight lines of eight each,” Ramani remembers proudly. She and her husband own an acre of land on which they grow sugarcane and turmeric for sale, and millets, pulses and vegetables for their own consumption. Ghater helped pay off their tractor loan (Rs. 2.5 lakhs, with payment of Rs. 8,000 per month) and it is a steady source of income during a bad year. “I started when my son Dhanushkodi was two months old [he is now 13] and I have not had to leave the valley to seek an income,” she adds happily. “I carry my ghater with me at all times. I can fill in stitches while water is filling my field.” 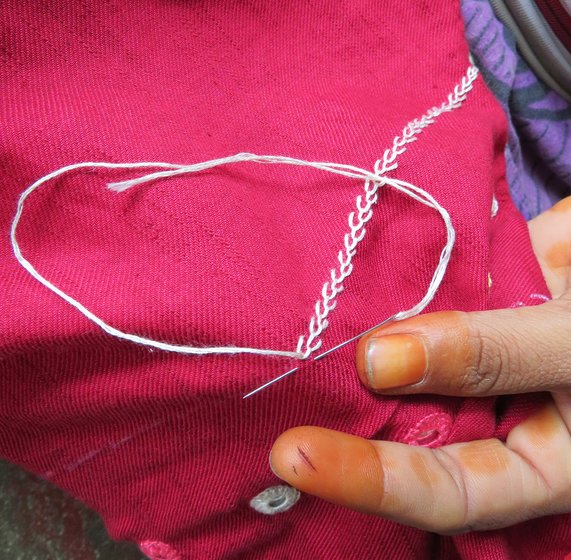 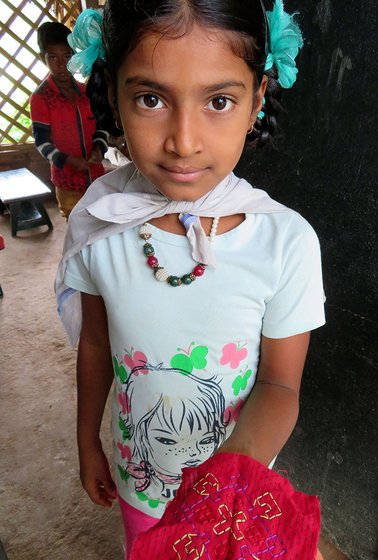 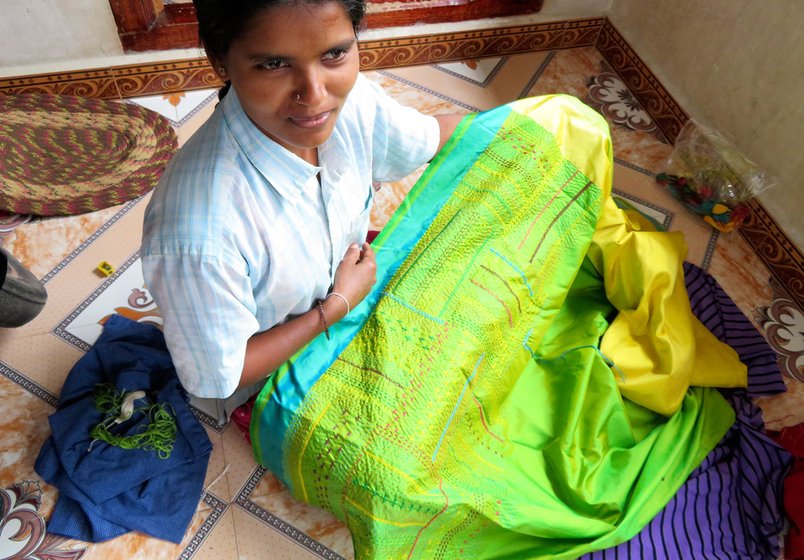 In Sittilingi, 60 women, like Ranjitham G. (right), are now skilled in embroidering. And Ramani's daughter Gopika (centre) has already started learning the craft

The rest of Porgai’s profits are spent in buying raw material such as cloth, threads and mirrors. The Association added a tailoring unit six years ago – seven machines. housed in the office building – as production increased and so did the variety of products – from cushions covers, bags and pouches to more complex pieces like sarees , kurtas and shirts and even jewellery, all selling at various retail outlets and craft exhibitions in different cities.

Thaikulam says that after Porgai started, none of its members has migrated. “If we can get more work, more women will join us and migration will come down even more,” she adds. “When women go out to work, families get split and parents are separated from their children. They return with all sorts of diseases because they work long hours and the living conditions are difficult.”

With visits to various handicraft fairs, Porgai is slowly pulling in more orders and its members have grown from the original 10 to 60 today. Annual design and training sessions are held in the Porgai office and any Lambadi woman interested in learning is welcome to join.  As an incentive, for the 10-day training period women are paid daily wages of Rs. 200. Experienced teachers like Gammi get an additional 50 rupees – and the prestige of being a veteran embroiderer.

Young Lambadi girls like Ramani’s nine-year-old daughter Gopika have already started learning the craft. She proudly shows us her first effort made during craft time in school.

So what does Gammi think of this revival? “If somebody dies and then comes back to life, you tell me,” she responds. “ We are the ones who brought it back to life.”

The writer would like to thank K. Gayathri Priya, Anagha Unni and Abhay for their help with the translation.