“Come and see us,” she says. “We are all following orders. Sitting here, far from each other, wearing masks. I am grateful for these rations, but it will only feed my family for a few days. After that, I don’t know what we will do.”

That’s Durga Devi, 55, speaking to us on the phone from Sujangarh town in Rajasthan’s Churu district, while waiting in line to collect free rations at Disha Shekhawati, the NGO where she works as a shibori artisan. Shibori is a fabric tie and dye technique, completely handcrafted. “We don’t know when we will get this corona, but we will die of hunger first,” says Durga Devi, laughing at her own dire prediction.

Durga Devi is the only working member in her family, after her husband died of alcohol abuse a few years ago. She is bringing up their nine children on her own. She earns a daily wage of about Rs. 200 and says she gets around 15 days of work in a month.

She passes the phone to Parameshwari, 35, also a daily wage artisan, sitting behind her in the queue for rations. Parameshwari (she prefers to use only her first name), says her husband labours at construction sites, but with those shut under the lockdown, is idle now. “We have no work and no money to eat,” she says. Like Durga Devi, she is hoping the five kilos of atta , a kilo of dal and 200-gram packets each of dhania , haldi and chilli will see her, her husband, and their four children through the next few days.

Chandi Devi, 65, doesn’t do shibori work anymore, but has come along with the others who are queuing up for rations. “The last meal I ate was 24 hours ago. I ate rice. Just rice. A van came to my area with some supplies yesterday, but I walk slowly and by the time I reached the spot – it was all over. I am very hungry.” 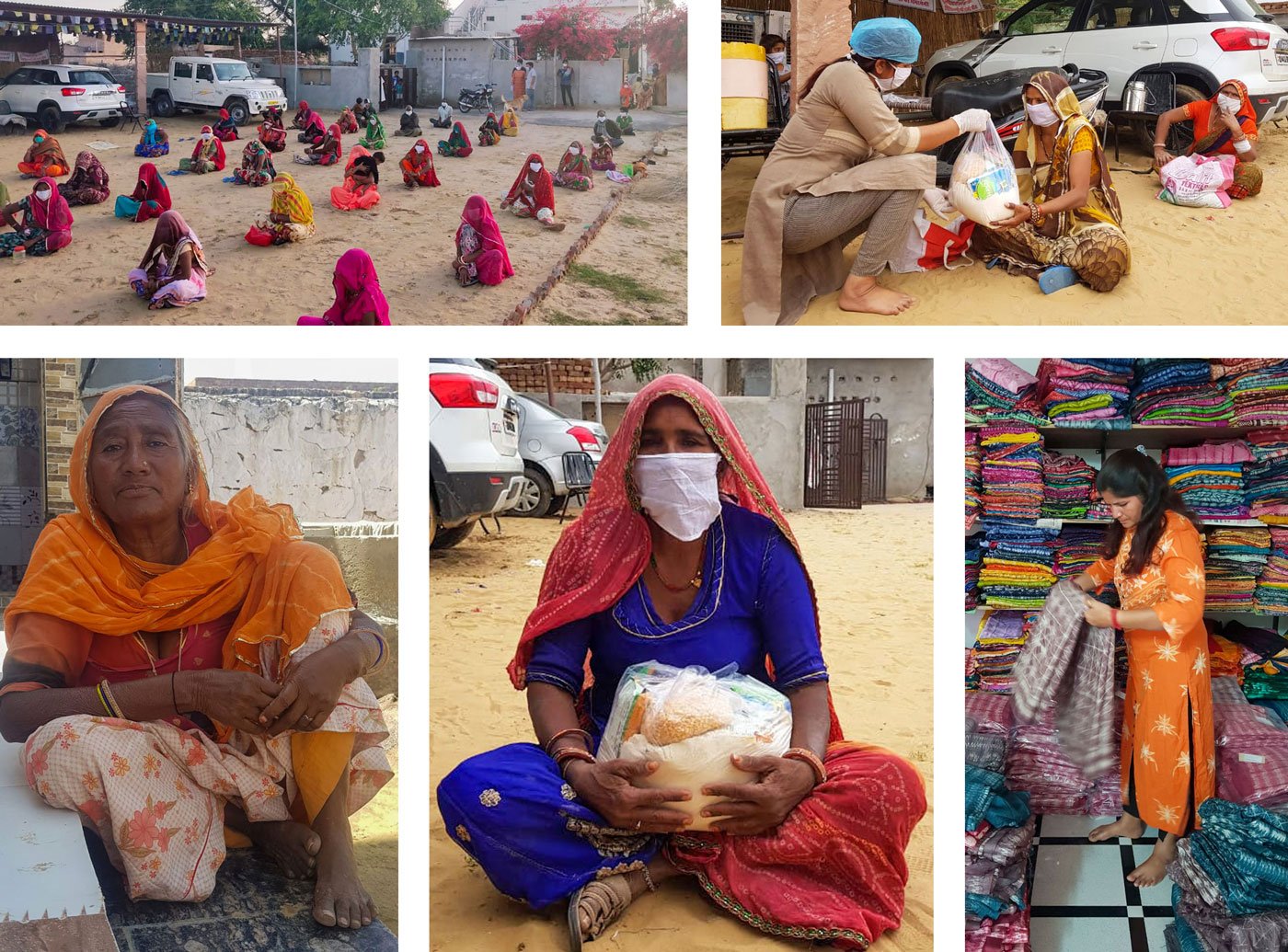 'The last meal I ate was 24 hours ago. I am very hungry', says Chandi Devi (bottom row left). She and 400 shibori artisans including Parmeshwari (top right) and Durga Devi (bottom row middle) are linked to Disha Skekhawati, an NGO in Sujangarh, Rajasthan. Bottom right: Founder Amrita Choudhary says, 'Ninety per cent of the artisans are daily wage labourers and have no savings to fall back on'

Disha Shekhawati counts 400 shibori tie and dye artisans like Durga and Parameshwari on its rolls. Founder Amrita Choudhary says, “The government is doing nothing. Ninety per cent of the artisans are daily wage labourers and have no savings to fall back on. We are doing what we can.”

About 10 days ago, says Choudhary, she began fielding calls from big buyers of handmade products, who said they would not be able to lift existing orders; they also asked her to stop further production. “I am sitting with sarees and stoles worth Rs. 25 lakhs. All the packing, labelling and barcoding is done. Now when will this move? When will money come in to pay my workers? No one can say.”

After agriculture, the handlooms and handicrafts industries are together perhaps the largest employers in the country . In just handloom weaving, over 3.5 million Indians are engaged in producing hundreds of varieties of fabric, a majority of them working independently. According to the Council of Handicrafts Development Corporation, at least 70 lakh people are engaged in the production of thousands of traditional crafts, and just exports alone from this sector were valued at Rs. 8,318 crore in 2015.

But Gita Ram, chairperson of the Crafts Council of India, Chennai, dismisses these figures: “The numbers are unreliable. There is no database of artisans and so their actual contribution to GDP is unknown. However, we do know that most of the production is by self-employed artisans in the unorganised sector and they are in dire need of relief.”

“We are not getting raw material, and so have no work. This lockdown has caused us a lot of financial problems. Soon we will need to borrow money to eat,” says Srinivas Rao. “Our wages are too little for us to have any savings,” Sulochana points out on the phone. 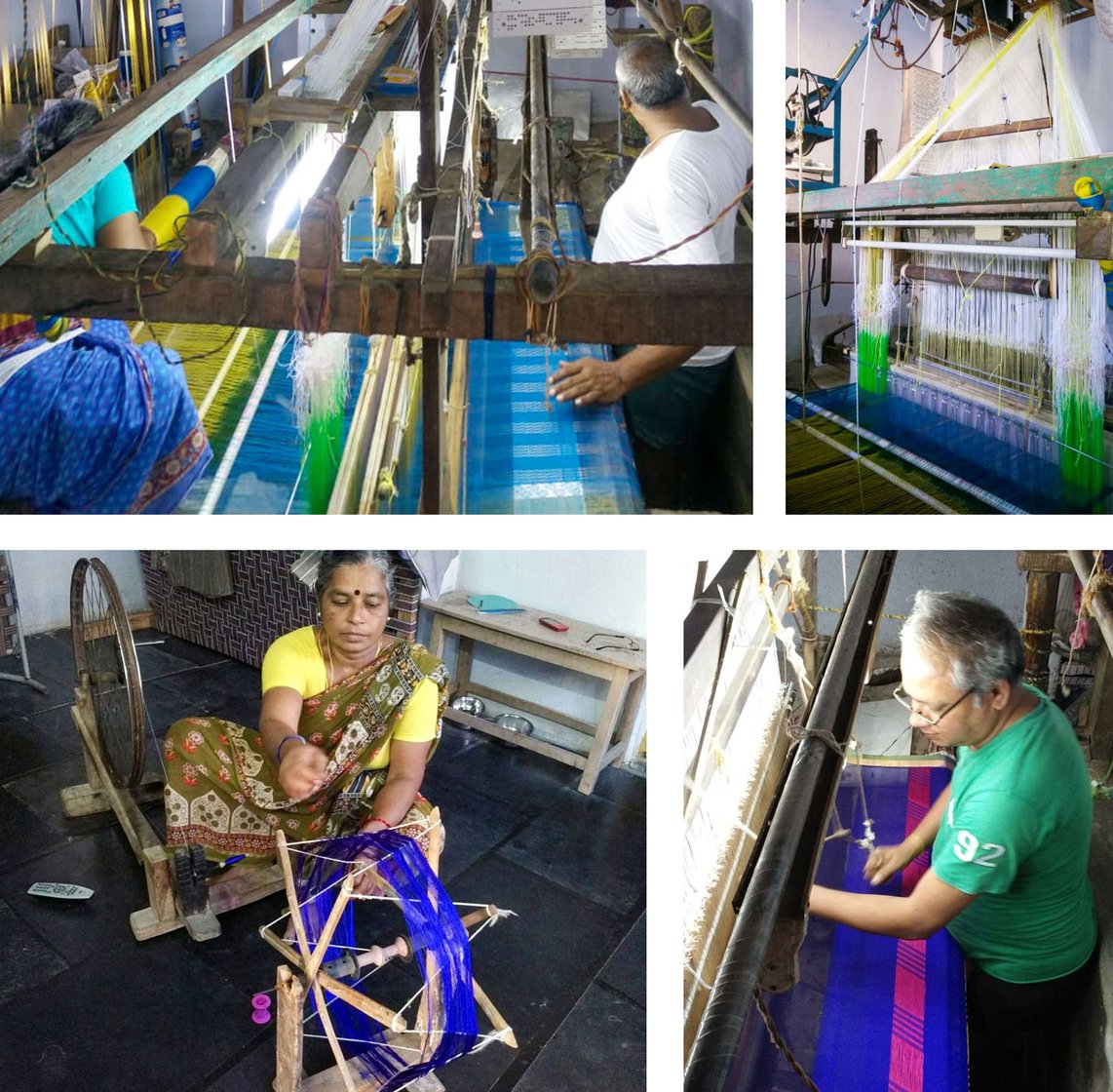 G. Sulochana and her husband G. Srinivas Rao, weavers in their 50s in Chirala town of Andhra Pradesh’s Prakasam district: 'We are not getting raw material, and so have no work. Soon we will need to borrow money to eat'

Chirala town has many weaver households who make sarees named after the town in a mix of cotton and silk with motifs. Sulochana and Srinivas Rao together produce 10-15 sarees a month. The master weaver they work for supplies them with the raw material and pays them around Rs. 6,000 for every five sarees. So together, they earn around Rs. 15,000 per month.

B. Sunitha, 35, and her husband Bandla Pradeep Kumar, 37, another weaver couple in Chirala, are also finding it difficult to sustain themselves and their two children. They normally earn around Rs. 12,000 a month together, for weaving up to 15 sarees. “The supply of zari [gold thread] stopped on March 10 itself, and the silk yarn supply stopped soon after. With no raw material, we cannot work,” Sunitha says.

Since the lockdown, they’ve been unable to reach the ration shop. They’ve run out of rice, the price of which has now shot up in the market. “This is the only work we know to feed ourselves,” she adds.

Sunitha and Srinivas’s individual earnings fall way below India’s per capita monthly income of Rs. 11,254. Among weaver households, though, their combined earnings would place them in the top seven per cent. Over 66 per cent of weaver households, says the Fourth All-India Handloom Census, earn less than Rs. 5,000 a month. 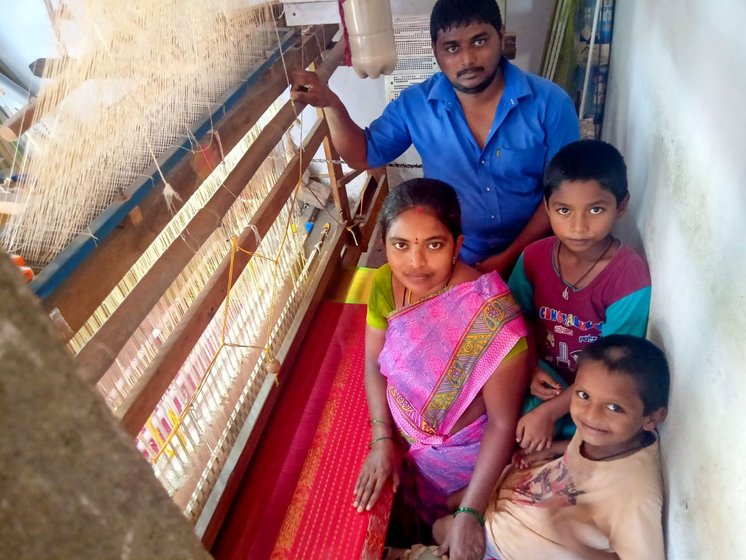 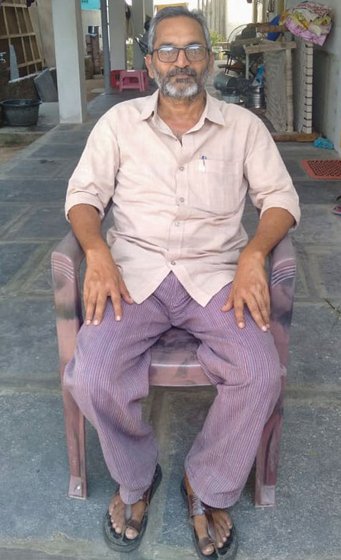 Left: B. Sunitha and her husband Bandla Pradeep Kumar in Chirala: 'With no raw material, we cannot work'. Right: Macherla Mohan Rao, founder president of the Chirala-based National Federation of Handlooms and Handicrafts, says, 'This [lockdown] will finish off the weavers'

Snubbed as a ‘sunset’ industry in India of the 1990s, the handloom and handicrafts sector took a hit in 2018 when 5 to 18 per cent GST was slapped on their products. Subsequently, GST on handloom was brought down to 5 per cent – if the product was just fabric. However, that on dyes and chemicals – so important in textiles – remained at 12-18 per cent. For handicrafts, it ranges between 8 and 18 per cent.

“Even before corona and the lockdown, weavers were not getting properly paid work and it was difficult for them to maintain their families. This [lockdown] will finish them off,” says Macherla Mohan Rao, 59, founder president of the Chirala-based National Federation of Handlooms and Handicrafts, a trade union with 20,000 members on its rolls.

“I have been asking the government [Ministry of Textiles] why are they ignoring poor weavers? Why are Employee State Insurance and Employee Provident Fund and maternity benefits not given to handloom and handicrafts on a par with the garment and made-up sectors? And why there is no housing facility for destitute weavers?” asks Mohan Rao. He has sent many mails since 2014 to members of Parliament, urging them to raise these questions on the floor of the house.

In Kancheepuram town (and district), Tamil Nadu, master weavers and national award winners B. Krishnamoorthy, 60, and B. Jayanthi, 50, own 10 looms. On these, the couple create the famed Kancheepuram silk sarees. They work on one loom and the rest are installed in the homes of weavers they employ.

“My weavers keep calling me [since the lockdown began] asking for loans of Rs. 2,000-3,000 for food,” says Krishnamoorthy. He has already given them an advance, but is worried that his highly skilled weavers may lose heart and look for other work or leave the town altogether. Krishnamoorthy’s fears are real: the number of weaving households fell by 2.5 lakh between just 1995 and 2010. 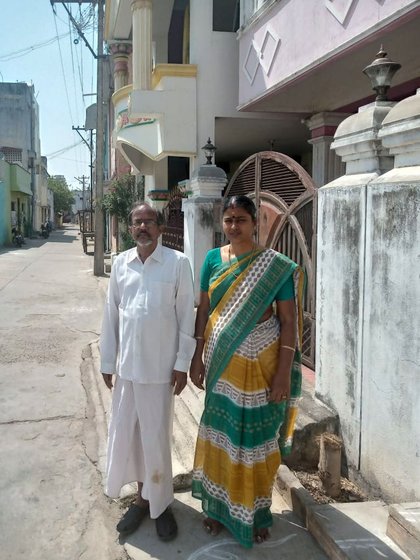 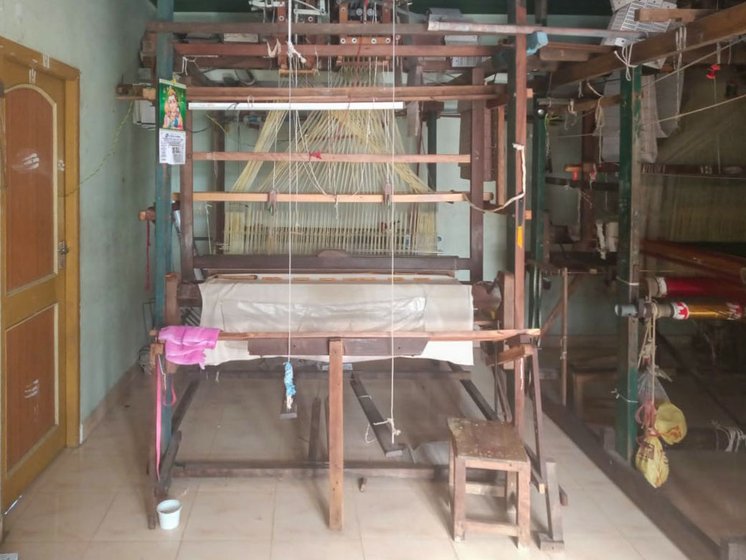 In Kancheepuram, Tamil Nadu, master weavers and national award winners B. Krishnamoorthy and B. Jayanthi: 'Weavers keep calling [since the lockdown began] asking for loans of Rs. 2,000-3,000 for food'

Handicraft and handloom exhibitions are a regular feature in Indian metros and even smaller cities and towns. Craftspeople say that their maximum sales take place at these events. But during this March and April, the months that season peaks,  many exhibitions have been cancelled, leaving them with huge stockpiles of inventory.

“Three exhibitions in Delhi and Kolkata have been cancelled. I have stock sitting with me and no one is buying. How will we eat?” asks Vankar Shamji Vishram, 45, a weaver from Bhujodi, a small town in Gujarat’s Kachchh district. “I am getting calls from foreign buyers to stop weaving. They are saying they will not be taking any products for some time.”

“At this time that you are calling me [3 p.m.] I would have been toiling in my workshop with my brothers and father,” says Ajit Kumar Vishwakarma, 35, a wooden toy-maker in Varanasi, Uttar Pradesh. “Now I am thinking of where to get food and how to avoid paying black market rates for atta , dal and aalu .” 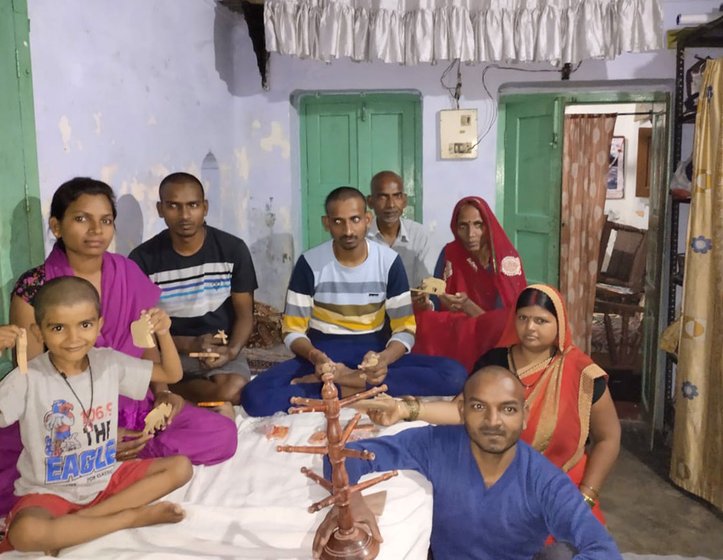 Left: Ajit Kumar Vishwakarma, a wooden toy-maker in Varanasi, Uttar Pradesh, says, 'Now I am thinking of where to get food'. Right: Suresh Kumar Dhurve, a Gond artist from Bhopal, Madhya Pradesh, says, ' I am sitting empty handed at home'

Ajit and his family make wooden toys, miniatures of birds and animals and tiny sculptures of Hindu deities. “Our whole family is dependent on the income we get from this work. A lot of money is due to me, but nobody is willing to pay. I have Rs. 5-6 lakh worth of products ready for exhibitions, which are now cancelled,” he says. “I have given an advance to my kumhars [potters] who paint the toys. They are also suffering.”

Ajit is most proud of his one-inch miniatures of birds and Hindu gods. All the members of his household – his father, two brothers, his mother, sister and wife – participate in whittling and carving wooden toys and ornaments; the women work from home in between household chores and the men go to the workshop, around 12 kilometres away. Mango, peepul , kadam and other soft woods are used in making the toys, which are then sent to the potter community for painting.

“I am sitting empty handed at home,” says Suresh Kumar Dhurve, 35, a fourth generation Gond artist from Bhopal, Madhya Pradesh. “Rations and water are difficult to get now and there is no supply of paints, brushes, papers and canvas, so how can I do any work? When will I do new work and when will I sell it and get paid? I don’t know. How will I feed my family? I don’t know.”

Dhurve says he is owed about Rs. 50,000 from people who have ordered his work, but doesn’t know when he will see that money. “This Covid is filling my mind and I can’t think of anything else.”

Most of the interviews for this story were done on the phone.