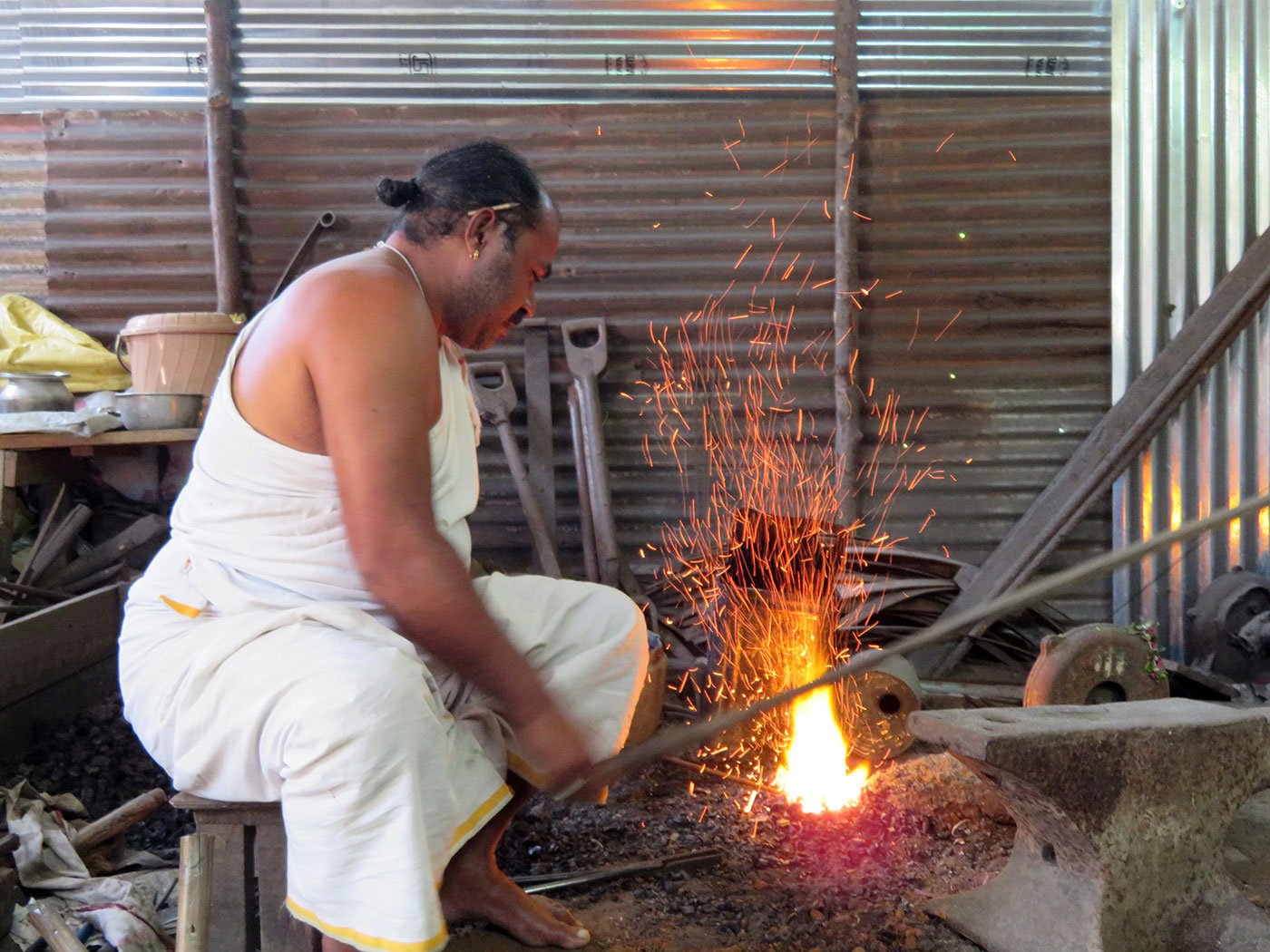 Rusting away: the last kollels of Kotagiri

Mohana Rangan can make 30 types of iron tools, but with few customers remaining for the traditional Kota Adivasi ironsmiths of the Nilgiris, he barely gets enough work to sustain him through the year

“How many knives can I sell in a year?” asks N. Mohana Rangan, sitting in his tin-roof workroom in the bylanes of Kotagiri town. “For tea, they need only small knives to cut the leaves. Big hand-held ploughs and rakes made of iron are required for agriculture, but today cultivation is less, tea plantation is more. Some days I come to the workshop and there is no work…”

Rangan, 44, is among the last of the kollels or ironsmiths of the Kota tribe. He lives in Puddu Kotagiri, a hamlet in the Nilgiris district of Tamil Nadu, a few kilometres from Kotagiri. “I have done this work for 27 years and before me, my father, my grandfather and their fathers and grandfathers did the same work,” he says. “It is work that has been done by our family for I don’t know how many generations.”

But this many generations-old work is losing out to the spread of tea plantations – from 1971 to 2008 (the latest year for which data is available), the area under tea cultivation in the Nilgiris has tripled from 22,651 hectares to 66,156 hectares, according to the Indian Tea Association. This has meant the slow end of the ironsmith’s trade. 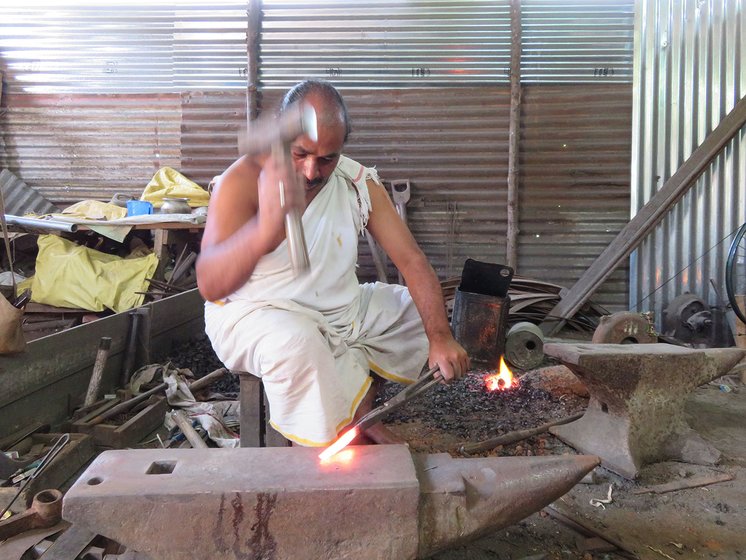 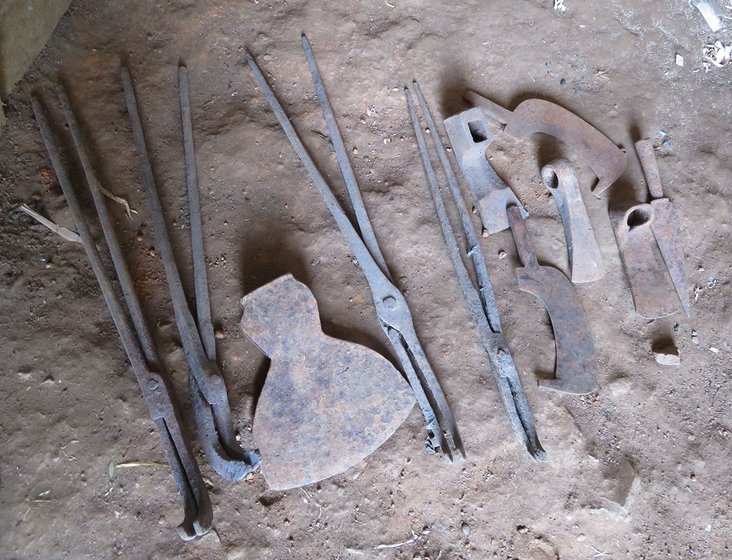 N. Mohana Rangan: 'Some days I come to the workshop and there is no work…'

How much longer he can survive without customers is a question Rangan finds painful to address. “I know an ironsmith’s work. We Kotas have always been doing it. But the days have changed and if my son gets employment elsewhere he will go.” His son Vaigund is 10 and his daughter Annapurni is 13; his wife Sumathi Lakshmi is a priestess. Rangan himself is a priest too and must wear the traditional Kota dress even while working at his smithy.

Rangan can make as many as 30 different types of knives, ploughs, scythes and other cutting tools; among his customers are agricultural labourers who work on tea estates, farmers and tree-cutters, as well as a few butchers and gardeners. “Once the rains arrive and sowing begins, I get orders on market days [Sundays and Mondays]. My tools are used for clearing the land, levelling, weeding, pruning tea bushes and trimming tree branches. From June to December I can make up to 12,000 rupees a month, and then it drops to a third or less the rest of the year. It becomes difficult to manage.”

To cut costs, Rangan has devised a hand-operated pulley that fans the fire. “In a smithy, one person’s job is to fan air into the fire and raise its temperature to melt the iron. I created a blower with a cycle wheel as a pulley. Now with one hand I can direct air into the fire, and with the other I can hold the iron and heat it.”

Watch video: Rangan at work in his Kotagiri workshop

This generations-old work is losing out to the spread of tea plantations – by 2008, the area under tea cultivation in the Nilgiris had tripled

Without his invention, Rangan would have to employ a helper. But most of the local labourers are at the tea gardens, and besides he cannot afford to pay Rs. 500 as the daily wage that they get there.

The Kotas, listed as a Scheduled Tribe, are traditionally the artisans of the Nilgiris. The community includes weavers, potters, ironsmiths, goldsmiths, carpenters, house-builders, basket-makers and leather workers. “From birth to death, we can fulfil any needs, our needs as well as [those of] others’ in the Nilgiris,” says R. Lakshmanan, 58, a former bank manager and now a Kota pujari (priest). “We used to sell our products to other communities They would give us grains and dried beans in return for iron tools. Most of the tools were mainly for agriculture, some for cutting and trimming trees. In these hills, for house construction, wood was the primary material. For cutting the trees, sizing the lengths for beams and pillars and carpentry work – we made tools for every job.”

But today, 70 per cent of families in Nilgiri district live in permanent houses made of brick, metal, cement and concrete, and 28 per cent in semi-permanent structures (made from bamboos, mud and other materials). Only 1.7 per cent live in a house made with material from the forests, which would need the skills of an ironsmith. In fact, even Puddu Kotagiri, where both Rangan and Lakshmanan live, has only cemented houses. 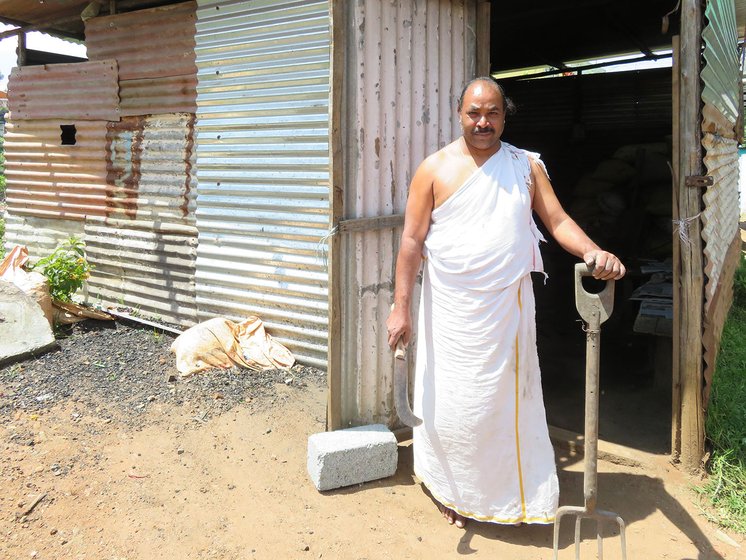 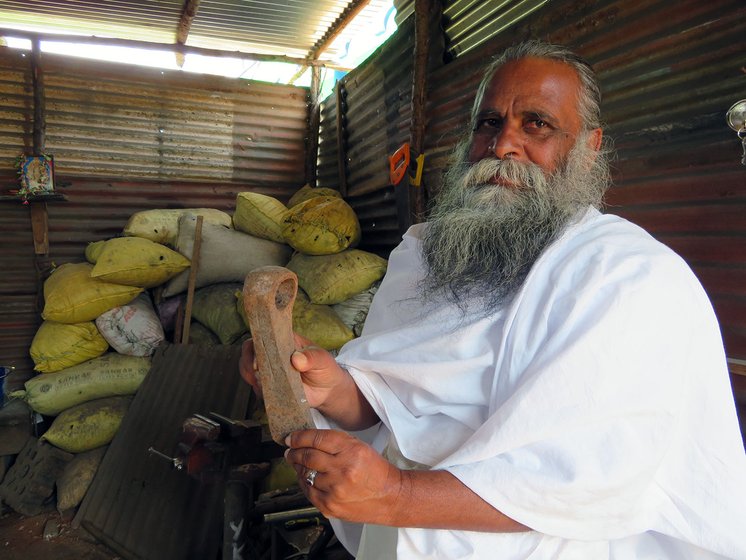 Left: Rangan, holding a large sickle and rake once used to clear the hills for agriculture. Right: R. Lakshmanan: '...our tools helped convert agricultural land into tea plantations, and wiped out our trade'

Rangan trained under his father and remembers a time when five more ironsmiths were employed by the family. “My father was well-known as an innovator and he designed iron tools that could plant tea bushes on any land,” he says, proudly. For many Adivasis converting their land from agriculture to the more lucrative tea crop, his expertise was just what they needed and they flocked to buy from him. “It was our tools which helped convert agricultural land and forest into tea plantations, and in the process our trade was wiped out,” points out Lakshmanan, wryly.

Rangan still manages some sales in the monsoon, but the rest of the time there is hardly any work, and so he has to make his money in those few months. “In a day I can make two big knives or sickles [to cut trees] with wooden handles. I can sell them for a [total of] a  1,000 rupees. My manufacturing cost is almost 600. But I find it difficult to sell two knives a day, even in my busy season,” he says.

Despite the declining sales and an uncertain future, Rangan is not ready to give up. “Though I’m not getting much money, I enjoy the innovation I can do here with this coal, iron and theedh [blowpipe]. After all, this is what I know.”

The writer would like to thank Mangali Shanmugham for his assistance and R. Lakshmanan for help with translation.