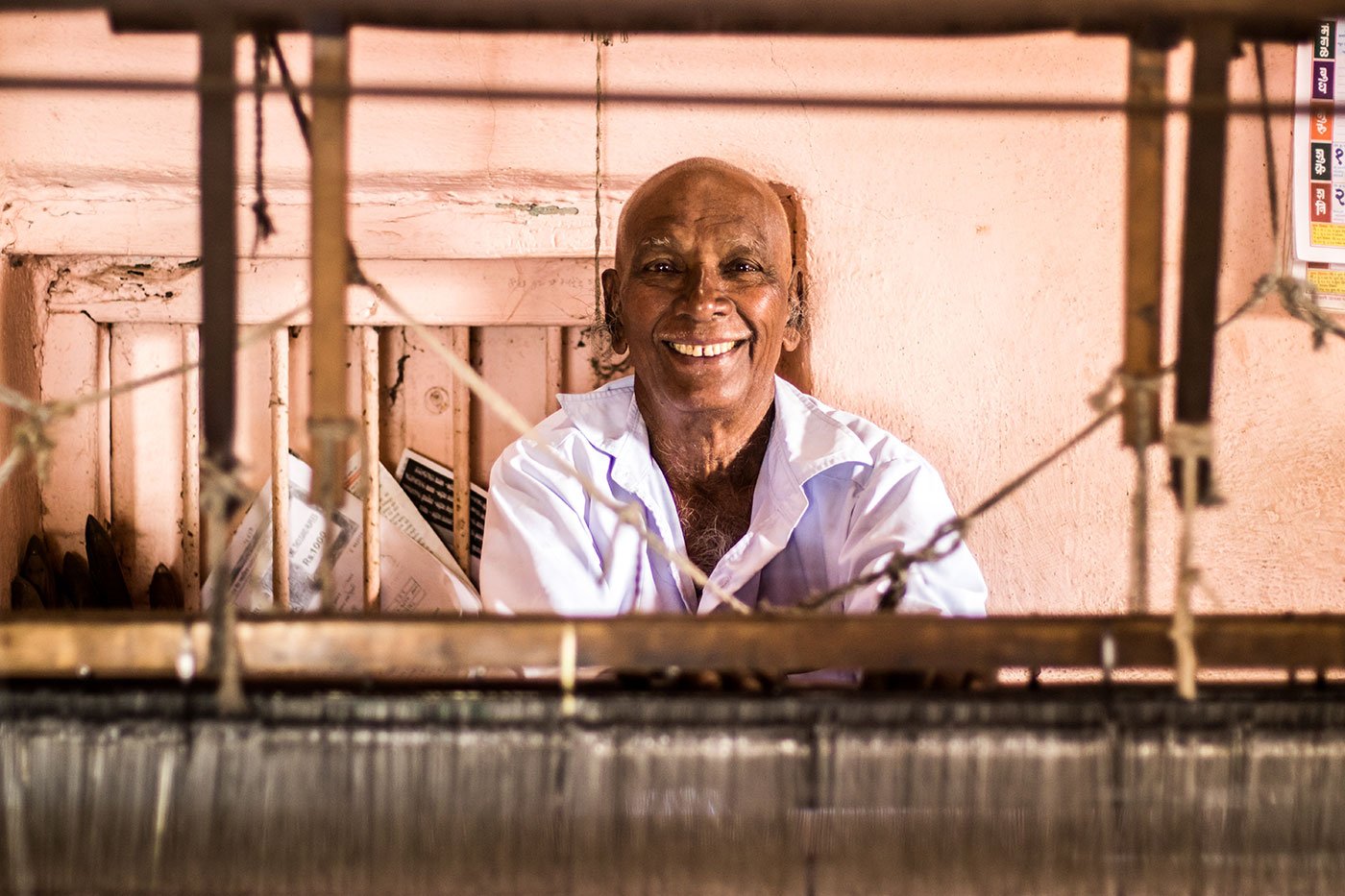 “ Viknar nahi handloom. Aayushya kaadhle tyachyavar [I won’t sell the handloom. I’ve spent my life at it],” says Vasant Tambe, pointing to a loom that stands seven feet tall in the centre of his house. “You can make any type of cloth using this,” he adds, with pride.

On this loom of sagwan wood, Tambe weaves 66 metres of cloth every two weeks, and on average uses 130 metres of yarn a month, which goes on to be stitched into high-quality shirts. He has been doing this at various looms for more than 60 years – and has spun well over 100,000 metres of cloth.

The 1 lakh metres started with a nauvari or nine-yard saree. When he was around 18, Tambe, now 82, first sat at a handloom at a karkhana in Rendal village as an apprentice, where he learnt how to make the saree. “For a month we had to work in the karkhana [workshop] for free,” he recalls.

Soon, Tambe began weaving a nauvari (a little over eight metres) in four hours, and earned Rs. 1.25 for each saree. “We would compete for weaving the maximum number. The most was 21 sarees in a week,” he recalls. In the 1960s and ’70s, he and his co-workers would get a bonus of Rs. 2 for such a feat.

The karkhana apprenticeship was necessary because no one else in young Vasant’s family was a weaver. The family belongs to the Dhangar community, listed as a Nomadic Tribe. Vasant's father, Shankar Tambe, worked as a mason, and his mother Sonabai was an agricultural labourer and homemaker. “I was afraid of falling from the tops of houses,” he says, about why he didn’t take to masonry. “So I decided to do something else.” 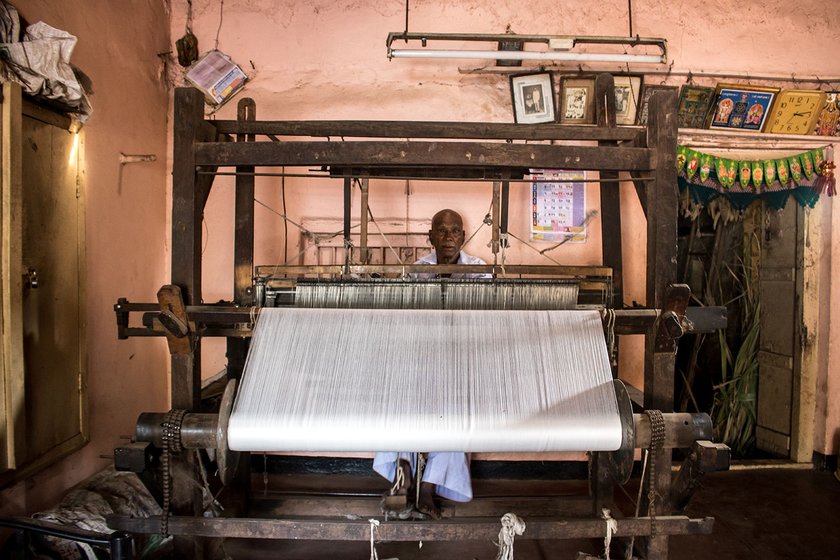 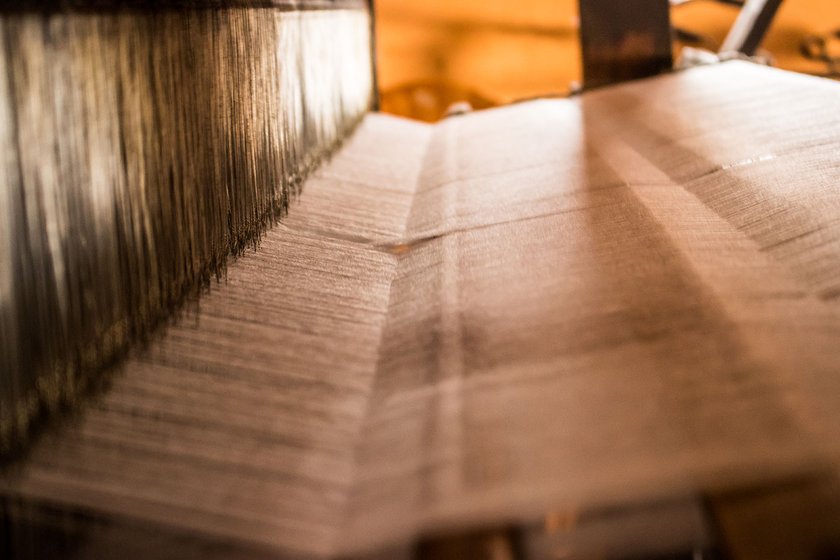 Left: Vasant Tambe bought this loom in 1975 for around Rs. 1,000. Right: The warp passes through 3,500 wire heddles of the handloom, which separates the threads

Tambe attended school till Class 2 but had to drop out because his parents could not afford it. After desultorily accompanying his father to work, he became an assistant to a local silversmith. Soon though, the clacking of the looms in his village drew the young Vasant into the karkhanas .

By the 1960s, with the per-saree rate rising to Rs. 2.5, Vasant was earning around Rs. 75 a month, weaving whenever work was available. To supplement that income, he also worked as an agricultural labourer, earning in the 1950s, he says, char aane or 25 paise a day for 10 hours of work in the fields. “We would buy a kilo of rice for Rs. 2 in 1960,” he recalls, and says the tur dal from the farm sold for 62 paise per kilo.

In 1975, after working at the loom in karkhanas for 20 years, Vasant, then 38 years old, bought two used handlooms for around Rs. 1,000 each from workshop-owners in Rendal, his village in Hatkanangle taluka of Kolhapur district. On his own loom, he could make Rs. 3 per saree by selling it to local handloom cooperatives.

Speaking of wages, Tambe remembers a time in 1964 when the workers protested against the handloom owners for better wages. He was then the president of the Hathmagh Kamgar Union in Rendal. “Our demand was an increase from the Rs. 2.5 we were paid per saree,” he says. After three months of protest, the handloom owners relented. “We managed to get the rate increased by 5 paise,” Tambe says. And the task of folding the woven saree, previously done by the weavers, was assigned to a different set of workers. “When the labourers weren’t paid for three months, the farmers from the village helped them by distributing their own produce for free,” he adds. 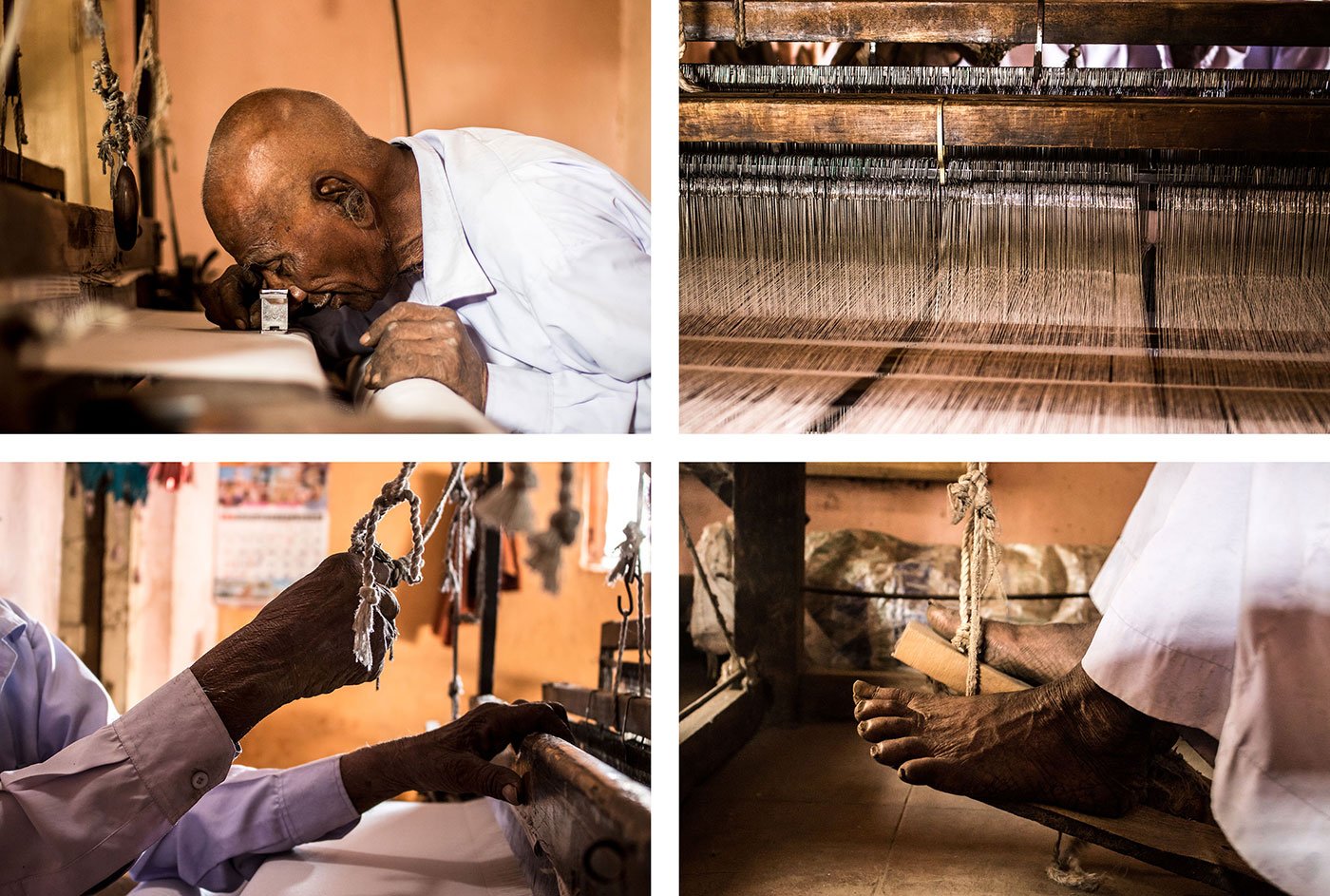 Top left: Vasant Tambe checks the thread count per inch with a magnifying glass. Top right: The 3,500 wire heddles (a looped cord) in the handloom, one for each thread of the warp. Bottom left: Tambe at his handloom. Bottom right: The weaver presses these treadles with the legs to control the up and down movement of the heddles

But by the 1970s, cheaper powerloom alternatives had become available and the demand for plain cotton sarees started declining across Maharashtra. The handloom weavers of Rendal moved from making cotton sarees to producing fabric for shirts.

“The sarees [made on our looms] were simple and even their colour would fade away after a few washes. Who would buy them?” asks Tambe. By the 1980s, Rendal’s fabric dyeing workshops (most of them owned by the karkhandars ) also began facing competition from the growing dyeing industry in Ichalkaranji town (around 15 kilometres from Rendal), which started using chemical dyes and machines that speeded up the process.

Tambe estimates that the first powerloom came to Rendal in the early 1970s, bought from Mumbai by a local businessman. It cost, he seems to recall, Rs. 5,000. A few other villagers soon started taking loans from moneylenders and buying powerlooms from Mumbai, Ahmedabad and Surat. Today, a powerloom costs at least Rs. 1 lakh and the weavers estimate there are 7,000 in Rendal, a large village of 19,674 people (Census 2001). 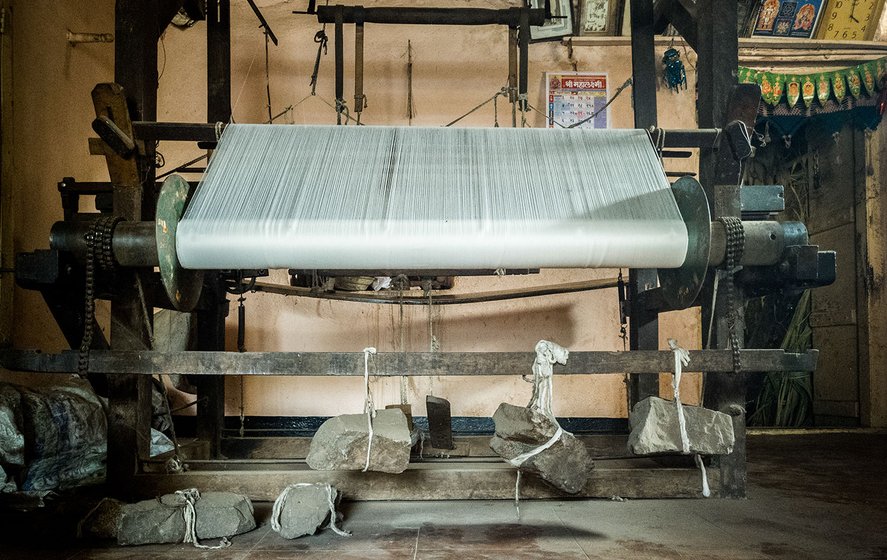 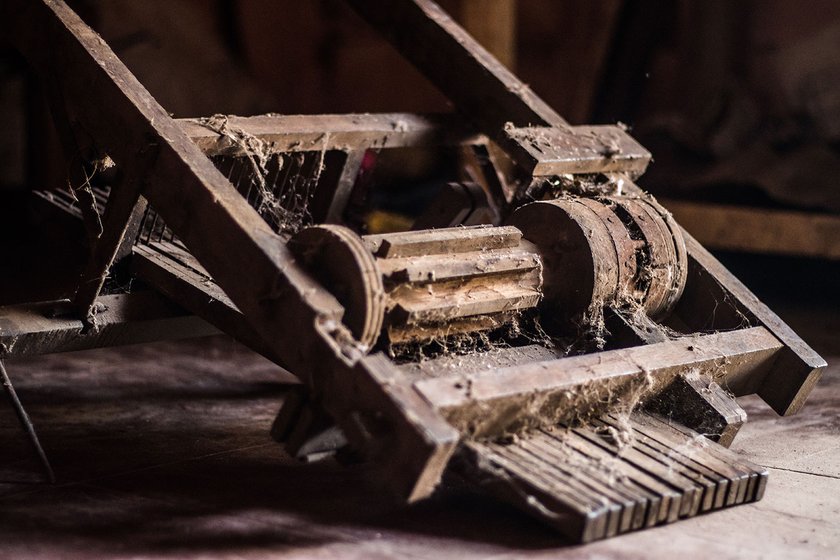 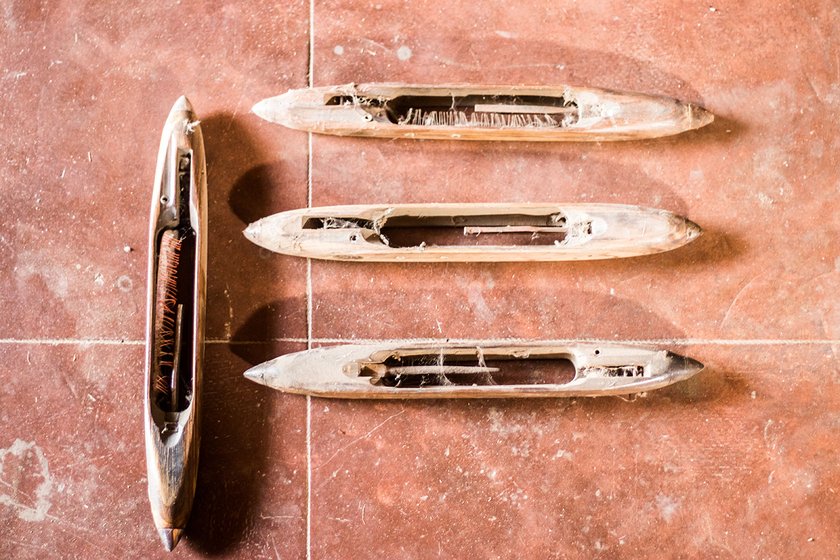 Left: Stones attached to the handloom help control the flow of thread towards the heddle from the mounted beam. Centre: This wooden equipment, called dabi in Marathi, was used to create designs on the sarees and fabric. Right: The shuttle which carries the pirn moves back and forth to interweave the yarn

The Handloom Census of India, 2009-2010, says that Maharashtra had 4,511 handlooms with 3,418 weavers that year, while across Maharashtra, there are now 13 lakh powerlooms, says a February 2018 document of the Department of Co-operation, Marketing and Textile Department of the government of Maharashtra.

And only four weavers in Rendal, including Tambe, continue to work at the handloom.

For long, Rendal’s weavers would sell the cloth they made to two cooperative societies run by karkhandar s in the village – the Automatic Handloom Co-operative Vinkar society and the Hathmagh Vinkar Co-operative Society. This in turn was sold to a bigger society in Solapur city, around 220 kilometres away.

But the societies in Rendal closed down in the late 1990s due to a decline in the demand for handloom cloth. Their offices, spread across two floors of a building, remain shut and one floor has been rented out to a private school. Other handloom societies in nearby villages and towns also started shutting down, so the weavers started to sell – as they still do – to a sub-centre of the Karnataka Handloom Development Corporation Limited in Koganoli village of Chikodi taluka of Belgaum district, around 22 kilometres from Rendal.

From the corporation, Tambe and the three other weavers of Rendal get a 31-kilo warp beam with 240 metres of cotton or polyester yarn wound around it, and another yarn roll weighing five kilos. “The cloth I weave [using this] is of superior quality [with a higher thread count] and I get Rs. 28 per metre,” Tambe says. “Other weavers get even less [around Rs. 19].” His monthly earning from weaving is Rs. 3,000 to Rs. 4,000, and he supplements it by cultivating sugarcane on one acre of land. 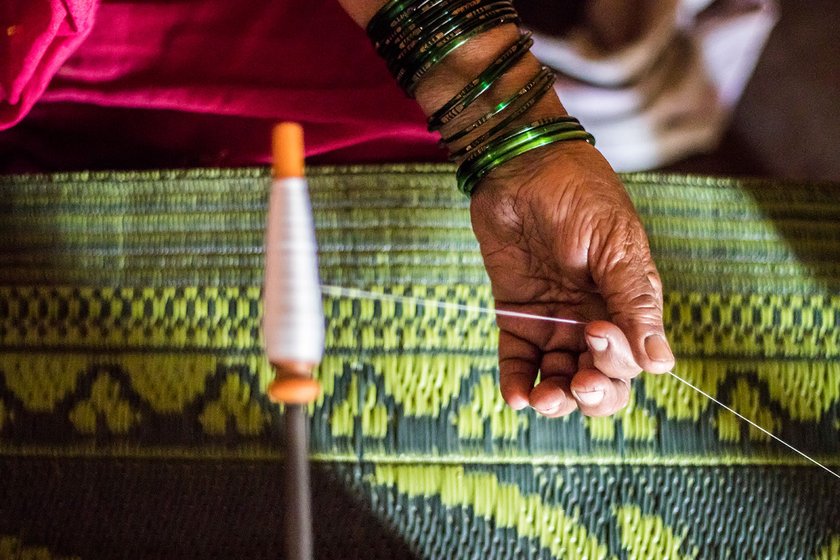 “A lot of physical work is involved in handlooms, and most people don’t want to do it now. On powerlooms you just have to operate a machine,” says Tambe. “An additional occupation is necessary. How will we survive on this low income?”

Vasant's wife, Vimal, 75, didn’t learn how to operate the handloom. In Rendal, only men work at the loom, while the women work at a charkha -like machine that winds weft yarn around a cylindrical pirn or spindle. (The Handloom Census of India 2009-2010 says of the 38.47 lakh adult weavers and allied workers in the country, 77 per cent are women and 23 per cent are men). “I had a lot of household work, and I used to handspin the yarn,” Vimal says, when I ask her why she didn’t operate the handloom. She worked as an agricultural labourer too, but stopped a decade ago due to advancing age.

It takes Vimal around three hours to wind 25 pirns, and her husband needs three pirns to weave a metre of cloth. In the past, she would sit on the floor, but because of an accident last year that broke her leg, she now sits on a chair.

Their two sons died in childhood, and one daughter, who is married, does tailoring work. Even as early as the 1980s, Tambe broke the second handloom he had bought to make a door frame. It leads to a world that has faded away.