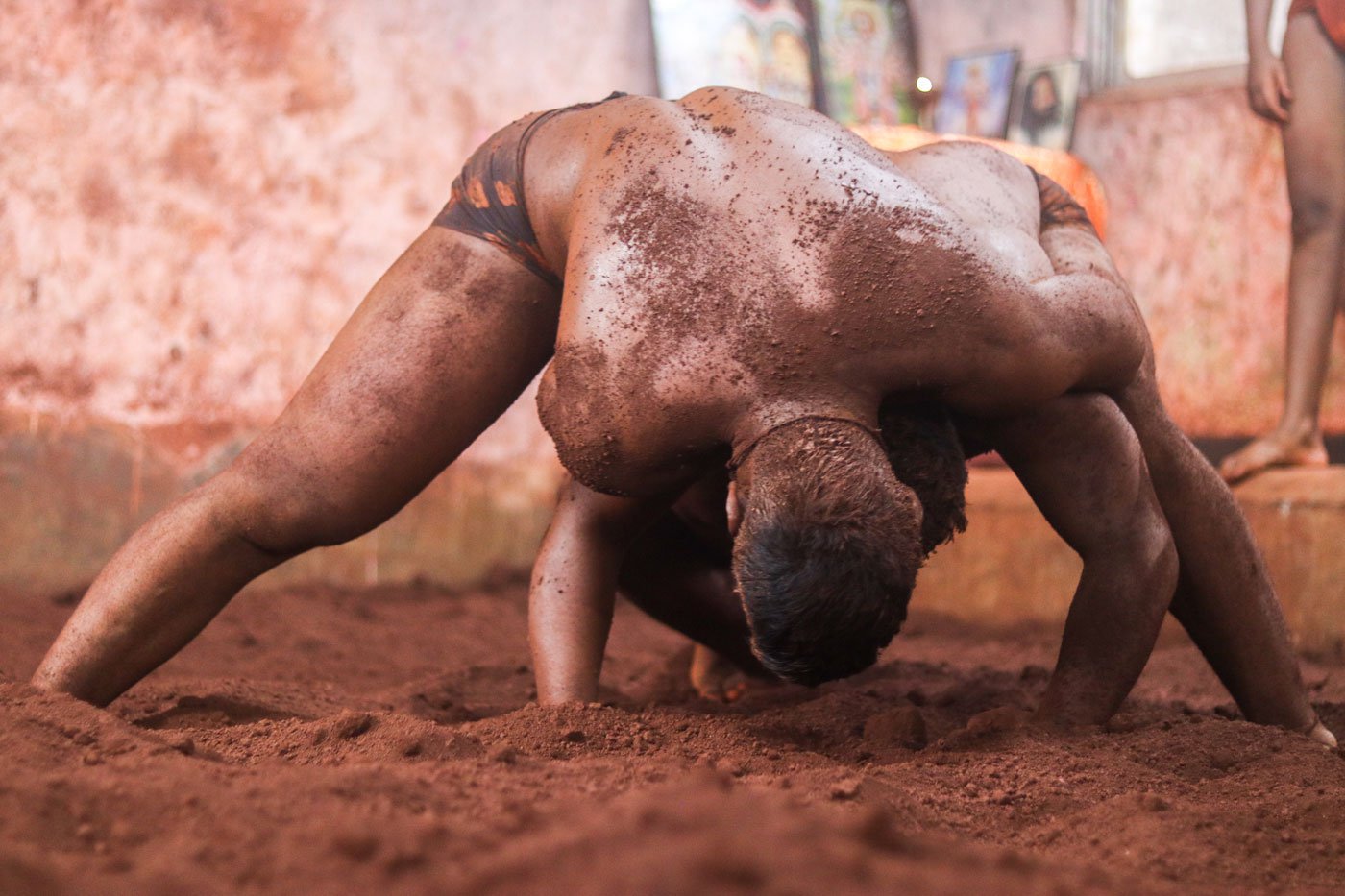 Maharashtra’s famed wrestlers, particularly those in Kolhapur, a great centre of this sporting discipline, have been devastated by Covid-19, two floods, cancelled tournaments, falling income and poor diets

When Bajrang Gaikwad lost five kilos, he knew the damage was done. “Earlier, I drank six litres of buffalo milk, ate 50 almonds, 12 bananas and two eggs every day – followed by meat on alternate days,” he says. Now, he consumes all of this across seven days or sometimes over an even longer time span – and his weight has dropped to 61 kilos.

“A wrestler shouldn’t lose weight,” says 25-year-old Bajrang, a pehelwan from Kolhapur district’s Juney Pargaon village. “It can make you weak, and you can’t pull the best moves in a fight. Our khuraak [diet] is as important as training.” Like several other wrestlers from rural western Maharashtra, Bajrang has for long relied on the prize money from clay wrestling bouts – open-air matches on red mud  -- for his hefty meals.

But it’s been more than 500 days since Bajrang contested the last maidan (bout) in  Kolhapur’s Donoli village. “I wouldn’t have taken this big a break even in case of the worst injury,” he says. 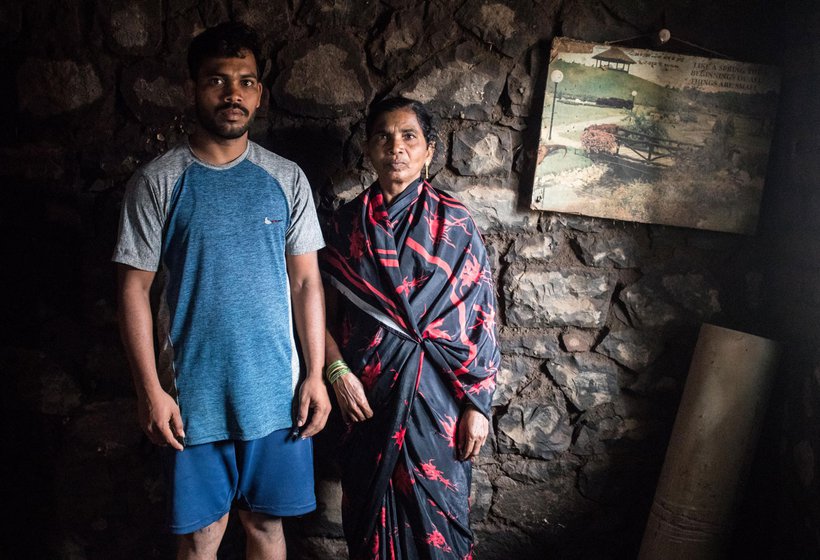 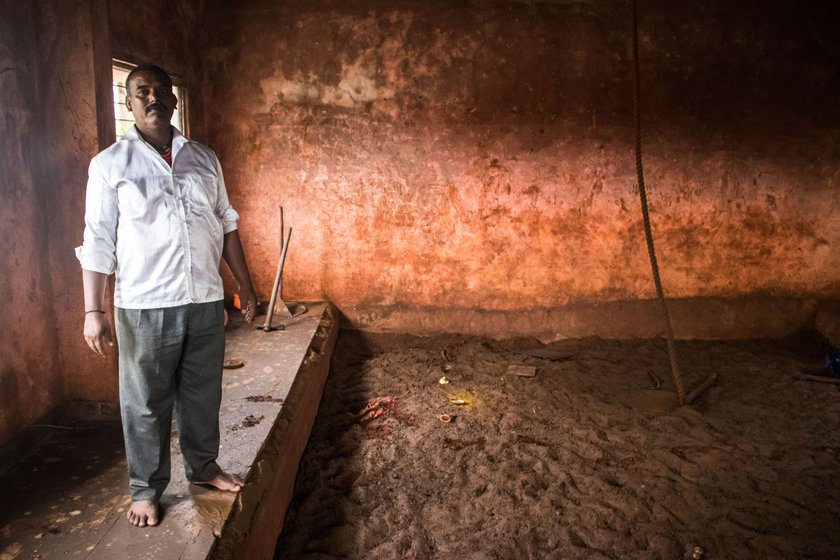 Left: Bajrang and his mother, Pushpa Gaikwad; their house was flooded in July 2021. Right: Coach Maruti Mane inspecting the rain-ravaged taleem . The floods came after a year-plus of no wrestling bouts due the lockdowns

The bouts have come to a standstill since March 2020. When the lockdowns unfolded, village jatras (fairs) across Maharashtra, where these kushti matches are held, were banned – and continue to be disallowed even now.

In the wrestling season before the Covid-19 pandemic began, Bajrang had earned Rs. a total of Rs. 150,000 from various bouts in the villages of western Maharashtra and northern Karnataka. That was his total income for the year. “A good wrestler can contest at least 150 matches in a season,” he says. The season starts by the end of October and lasts till April-May (before the monsoon begins). “Amateur wrestlers  can earn Rs. 50,000 in a season, while senior wrestlers earn as much as Rs. 20 lakhs,” adds Bajrang’s vastad (coach), 51-year-old Maruti Mane.

Even before the lockdown began, Bajrang and other pehelwans in Juney Pargaon village in Hatkanangle taluka had been through a setback when parts of western Maharashtra and Konkan were hit by floods in August 2019. Juney (old) Pargaon, and the adjacent Pargaon, which are near the northern bank of the Warana river, were inundated in three days of rain. The two villages together have a population of 13130 (Census 2011). 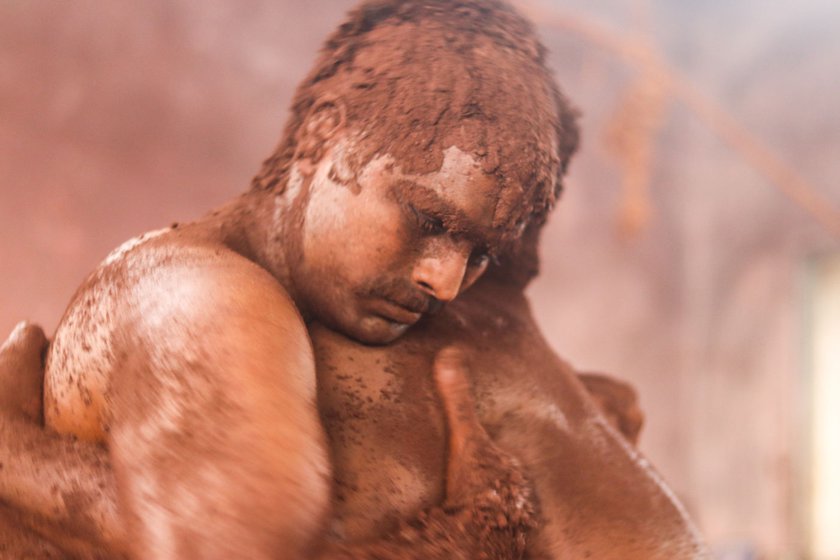 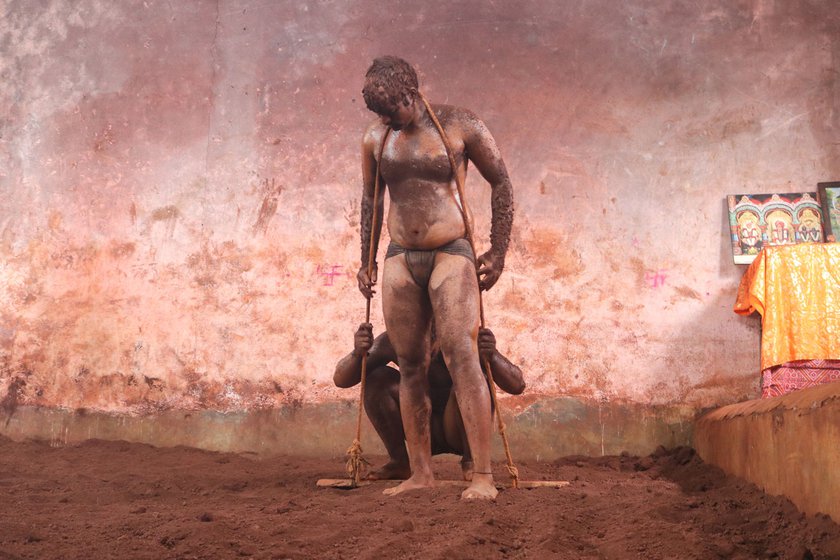 With the lockdown restrictions, even taleems – or akhadas – across Maharashtra were shut. This impacted the pehelwan s' training, and the increasing gap between training and bouts has forced many of them to look for other work

The Jai Hanuman Taleem in Juney Pargaon, which Maruti Mane estimates is over a century old, was submerged too. Over 50 wresters (all male) from here and nearby villages contributed to bringing 27,000 kilos of tambdi mati (red soil) from Sangli district in a truck to rebuild their 23 x 20 feet training hall’s five-feet deep wrestling space. It cost them Rs. 50,000 .

However, with the lockdown restrictions, even taleems – or akhadas – across Maharashtra were shut. This has had an impact on Bajrang’s training, as well as that of other wrestlers. And the increasing gap between training and bouts has forced many of them to look for other work.

In June 2021, Bajrang too took up a job as a labourer in an automobiles parts factory 20 kilometres from his home. “I get Rs 10,000 a month and need at least Rs. 7000 for my khuraak, ” he says. Top-end wrestlers, according to his coach Maruti Mane, have to spend as much as Rs. 1,000 every day on khuraak alone. Unable to keep up, by August 2020 Bajrang reduced his food intake – and began losing weight.

'None of the wrestlers can now train at least for two months', says coach Mane. 'First, the entire mati [mud] will have to be dried for a month'

Watch the video:  Wrestling with floods, lockdowns and more

After his father, an agricultural labourer, passed away in 2013, Bajrang had worked at various jobs. For a while, he did packaging tasks in a local milk cooperative for Rs. 150 a day – and an unlimited quantity of milk.

His mother, Pushpa, 50, supported his journey to the akhadas – he began at the age of 12 in a local bout . “I made him a wrestler by working as an agricultural labourer [earning Rs. 100 for six hours of work]. But it has become more difficult now as there is no work in the fields because of the [recurring] floods,” she says.

Bajrang’s new job as a labourer involves back-breaking work, and that too eats into the time he needs for the mandatory workouts. “There are days where I don’t even feel like going to the taleem ,” he says. Though these halls are shut since March 2020, a few wrestlers continue to sometimes train inside.) 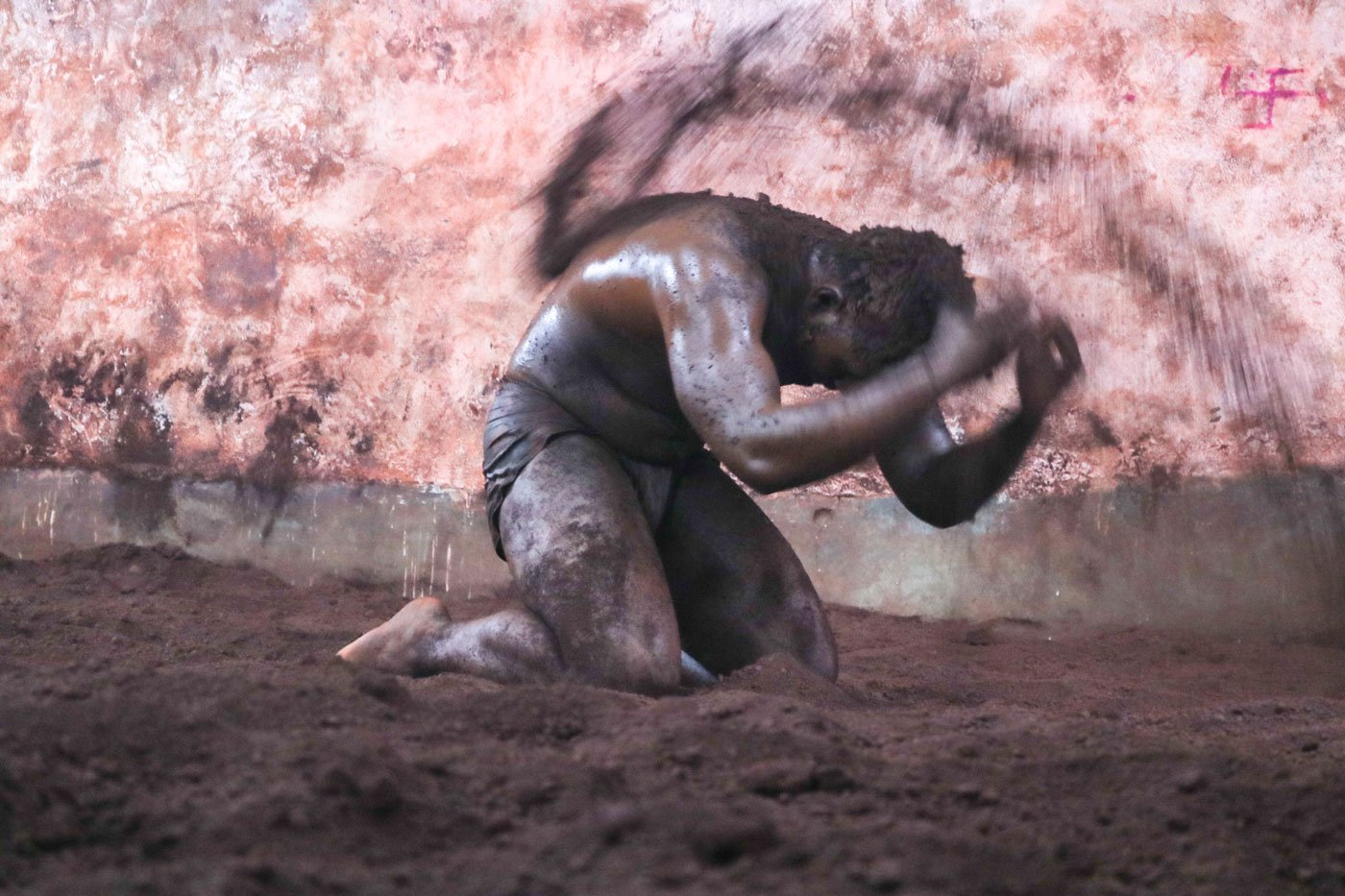 Though Juney Pargaon village's taleem is shut since March 2020, a few wrestlers continue to sometimes train inside. They first cover themselves with red soil to maintain a firm grip during the bouts

In May 2021, after over a year of the hall being sparsely used, the wrestlers began re-layering and preparing the akhada again. Some 520 litres of buffalo milk, 300 kilos of turmeric powder, 15 kilograms of crushed camphor, juice of roughly 2,500 lemons, 150 kilos of salt, 180 litres of cooking oil, and 50 litres of neem-infused water were added to the red soil. This concoction is believed to protect the wrestlers from infection, cuts and major injuries. The cost of Rs. 100,000 was once again handled through contributions by the wrestlers and a few local supporters of the sport.

Barely two months later, on July 23, their village was once again swamped by rains and flood waters. “In 2019 the water was at least 10 feet inside the taleem and in 2021 it crossed 14 feet,” says Bajrang. “We can’t [again] afford to contribute, so I reached out to the panchayat , but no one came forward.”

“None of the wrestlers can now train at least for two months,” says coach Mane. “First, the entire mati [mud] will have to be dried for a month. After that, they will have to buy a new lot of mati .” 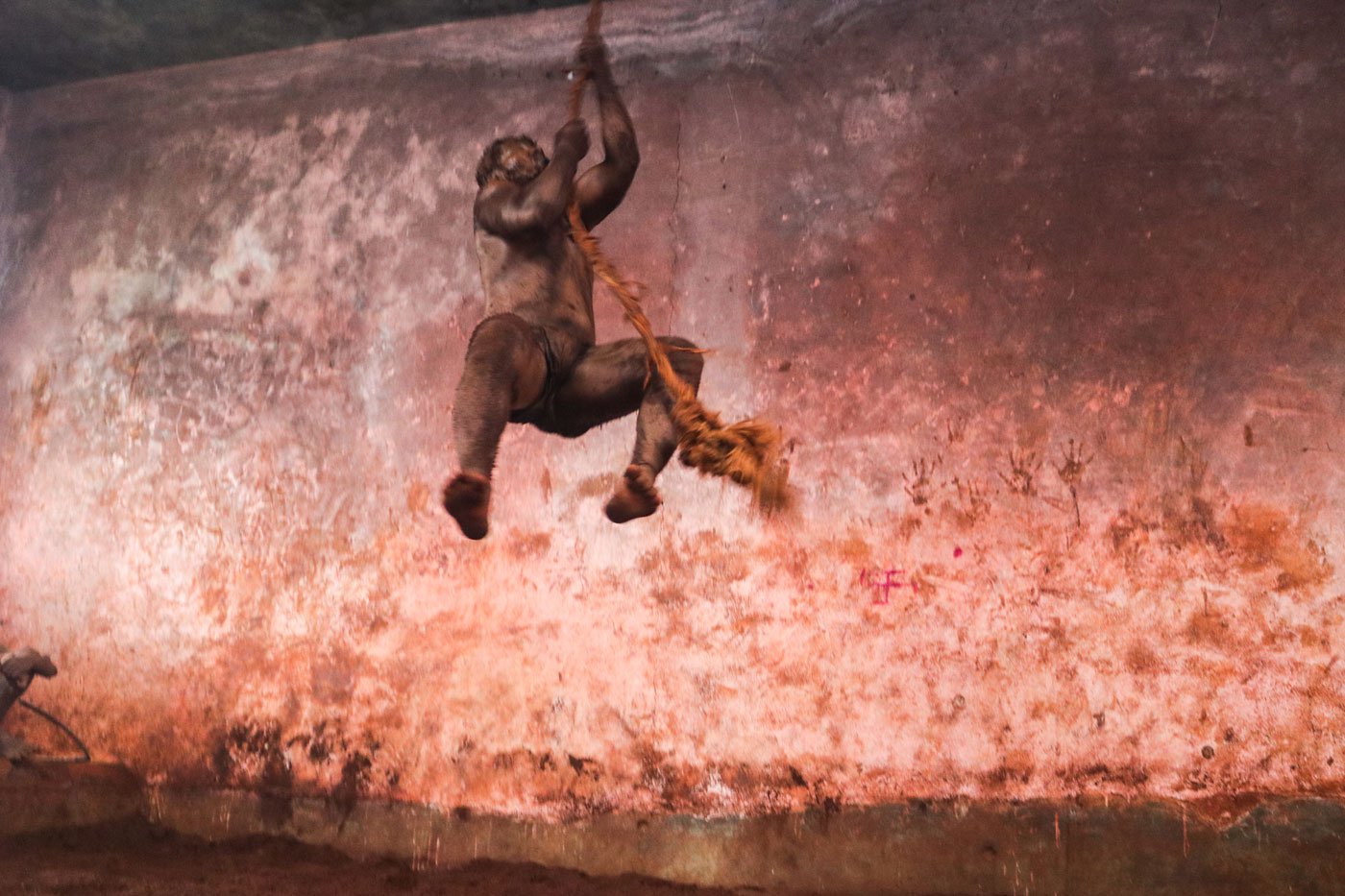 A pehelwan from Juney Pargaon climbing a rope, part of a fitness regimen. 'If you miss even a day of training, you go back by eight days', says Sachin Patil

This time-gap will have further direct fall-outs. “If you miss even a single day of training, you go back by eight days,” says Sachin Patil, 29, who has contested in the prestigious Kesari bouts. This tournament is held by the Maharashtra State Wrestling Association in different districts of the state, usually in November-December. In February 2020, he won seven bouts in Haryana. “It was a good season, and I earned Rs. 25,000,” he says.

Sachin has been working as an agricultural labourer for four years, at times doing the task of spraying chemical fertilisers in fields – and earns around Rs. 6,000 a month. For a while, he received some support from the Warana sugar cooperative in Kolhapur district – a monthly stipend of Rs. 1,000, one litre of milk every day and a place to stay. (At times, young wrestlers with a good track record get such support from the state’s sugar and milk co-operatives, as did Bajrang from 2014 to 2017.)

Before March 2020, his would train from 4:30 to  9 a.m. every day, and then again after 5:30 p.m. “But they couldn’t train in the lockdown, and now the impact is visible,” says coach Mane. He estimates it will take at least four months of rigorous training for the wrestlers to be able to compete again. Sachin though fears he has lost his prime wrestling time to the two floods and Covid within just two years from mid-2019. 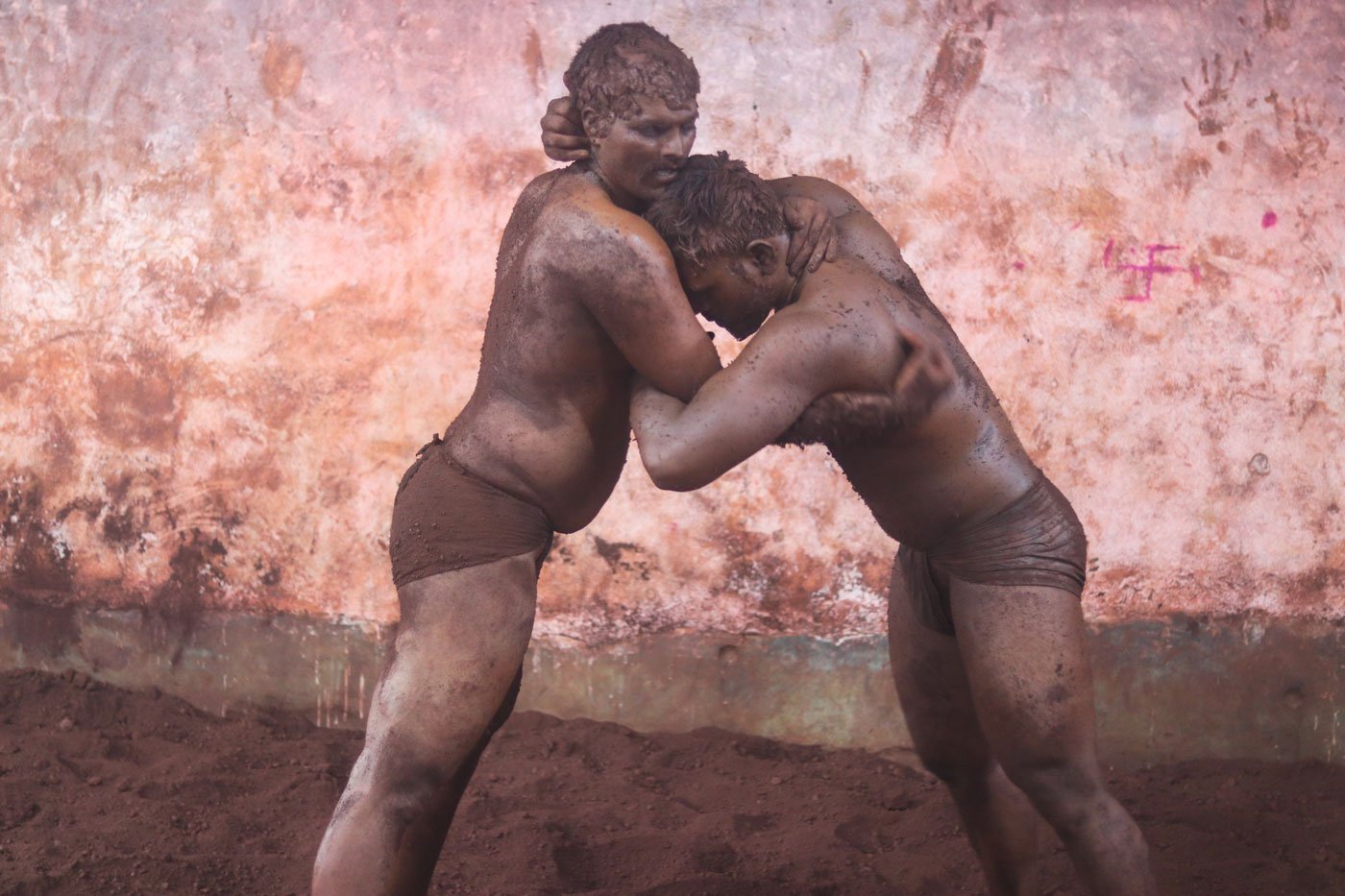 With this series of setbacks, the once-popular sport of kushti, already on a downslide, is in serious decline

“You are at your best from 25 to 30, after that it gets difficult to continue wrestling,” explains Mane, who himself wrestled for over 20 years, and has worked as a security guard in a local private hospital for the past two decades. “The life of a rural wrestler is full of struggles and sorrows. Even some of the best wrestlers are working as labourers,” he adds.

With this series of setbacks, the once-popular sport of kushti , already on a downslide, is in serious decline. In Maharashtra, open-air wrestling was popularised by the ruler and social reformer, Shahu Maharaj (starting in the late 1890). Grapplers from Afghanistan, Iran, Pakistan, Turkey and some African nations were in great demand in the villages. (See Kushti: the secular & the syncretic )

“A decade ago, there were at least 100 wrestlers in Juney Pargaon. Now it is down to  55. People don’t have the money to train,” says Maruti, who belongs to the Dhangar community and is the second generation of wrestlers in the Mane family. He trains students, without charging a fee, from the villages of Ghunaki, Kini, Nilewadi, and Pargaon and Juney Paragon. 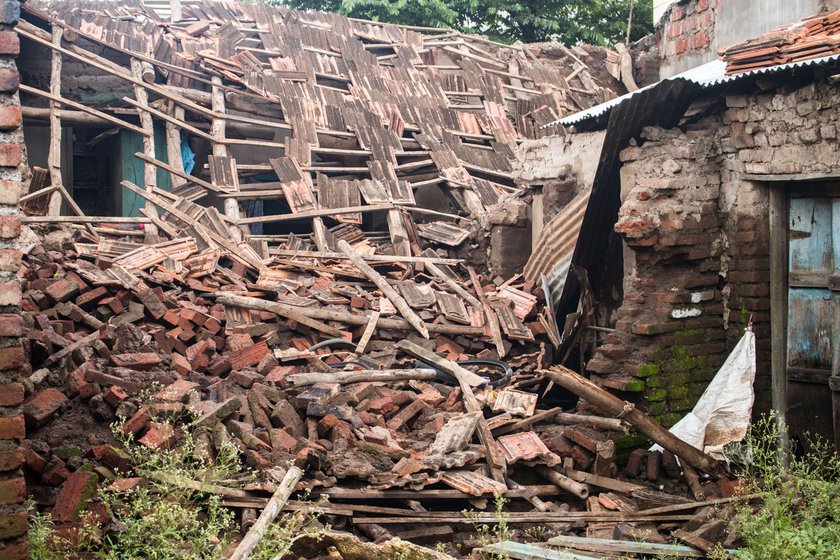 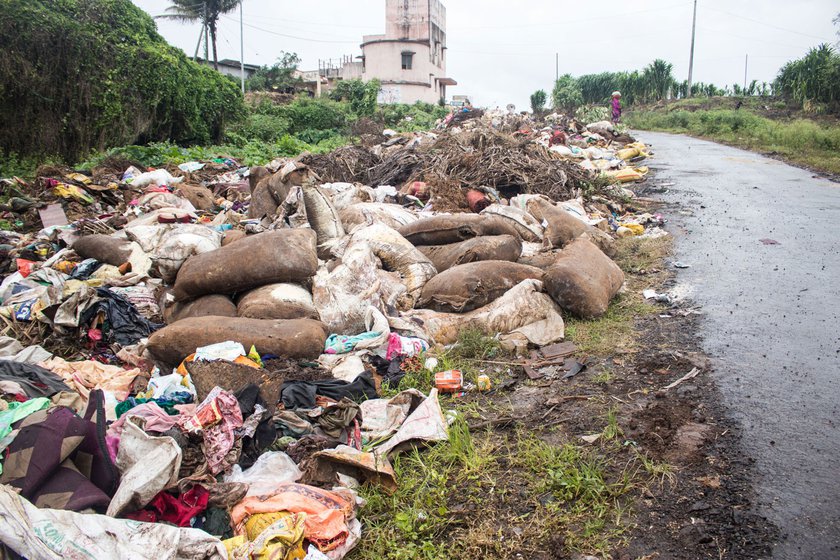 'This year [2021], the floods were worse than 2019' says Bajrang, and the water once again caused widespread destruction in Juney Pargaon village

His wrestling trophies adorn a high shelf in the taleem, safe there from the flood waters. Talking about the deluge, he says, “On July 23 [2021], we left our home at 2 in the night and went to a nearby field. The water started rising rapidly and the entire village drowned in a day.” The Mane family safely evacuated their six goats and a buffalo, but lost 25 hens. After the floodwater started receding on July 28, Maruti first headed to taleem with around 20 other wrestlers to find everything destroyed.

He now worries about the further impact this will have on a younger generation of wrestlers. In two years [2018-19] of contesting, 20-year-old Mayur Bagadi, a BA student in Sangli district, had won over 10 bouts.  “Before I could learn more and travel further, the lockdown took away everything,” he says. Since then, he has been helping his family milk their two buffaloes and cultivate their farmland.

In the last bout he contested in February 2020 in Ghunaki village, he won Rs. 2,000. “The winner takes 80 per cent of the amount, and the runner-up gets 20 per cent,” explains Sachin Patil. This way, each bout brings in some income.

Before the recent flood, Mayur and three other wrestlers from nearby Nilewadi would often travel the four kilometres to Juney Pargaon.  “There’s no taleem in our village,” he says. 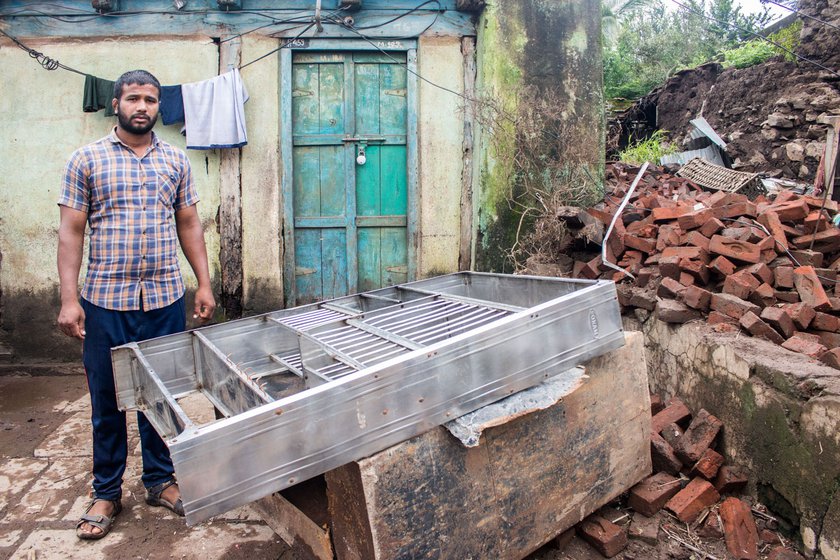 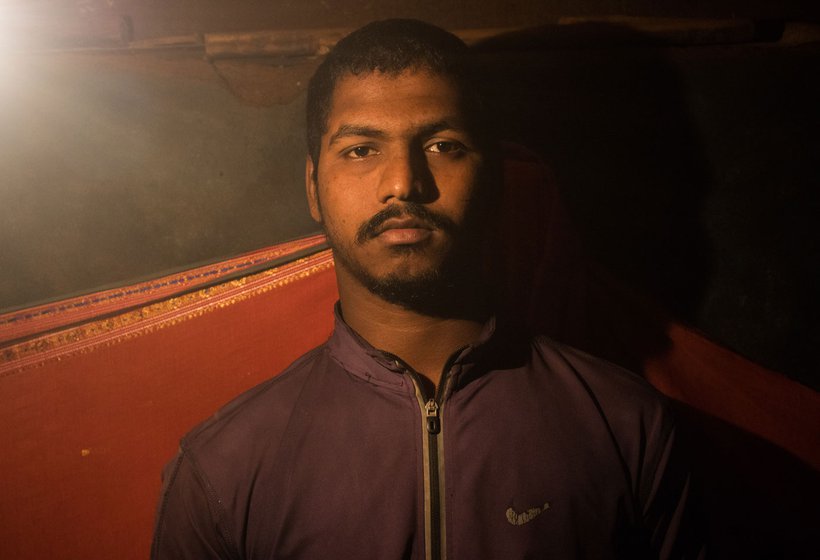 Left: Wrestler Sachin Patil’s house was damaged even in the 2005 and 2019 floods. Right: Mayur Bagadi from Nilewadi has won over 10 bouts in two years.

During the flood last month, he says, “We remained in three feet of water for a day. I was feverish after being rescued.” The Bagadis stayed in a private school for a week in Pargaon village. “Our entire house drowned, even the 10 guntha [0.25 acres] farmland,” adds Mayur. The family had counted on a sugarcane harvest of 20 tons worth Rs. 60,000. They also lost 70 kiloss of corn, wheat and rice stored at home. “Everything is gone,”  Mayur says.

After the flood, Mayur helped his parents – both farmers and agricultural labourers – to clean the house. “The stench doesn’t go away, but we have to now sleep and eat here only,” he says.

The floods have become progressively worse, Bajrang says. “The 2019 floods were more dangerous than the 2005 floods. And in 2019, we didn’t get a single rupee as compensation. This year [2021], the floods were worse than 2019,” he says. “If the government can support IPL [Indian Premiere League] and even think of shifting it to other countries, then why can’t something be done for kushti? ”