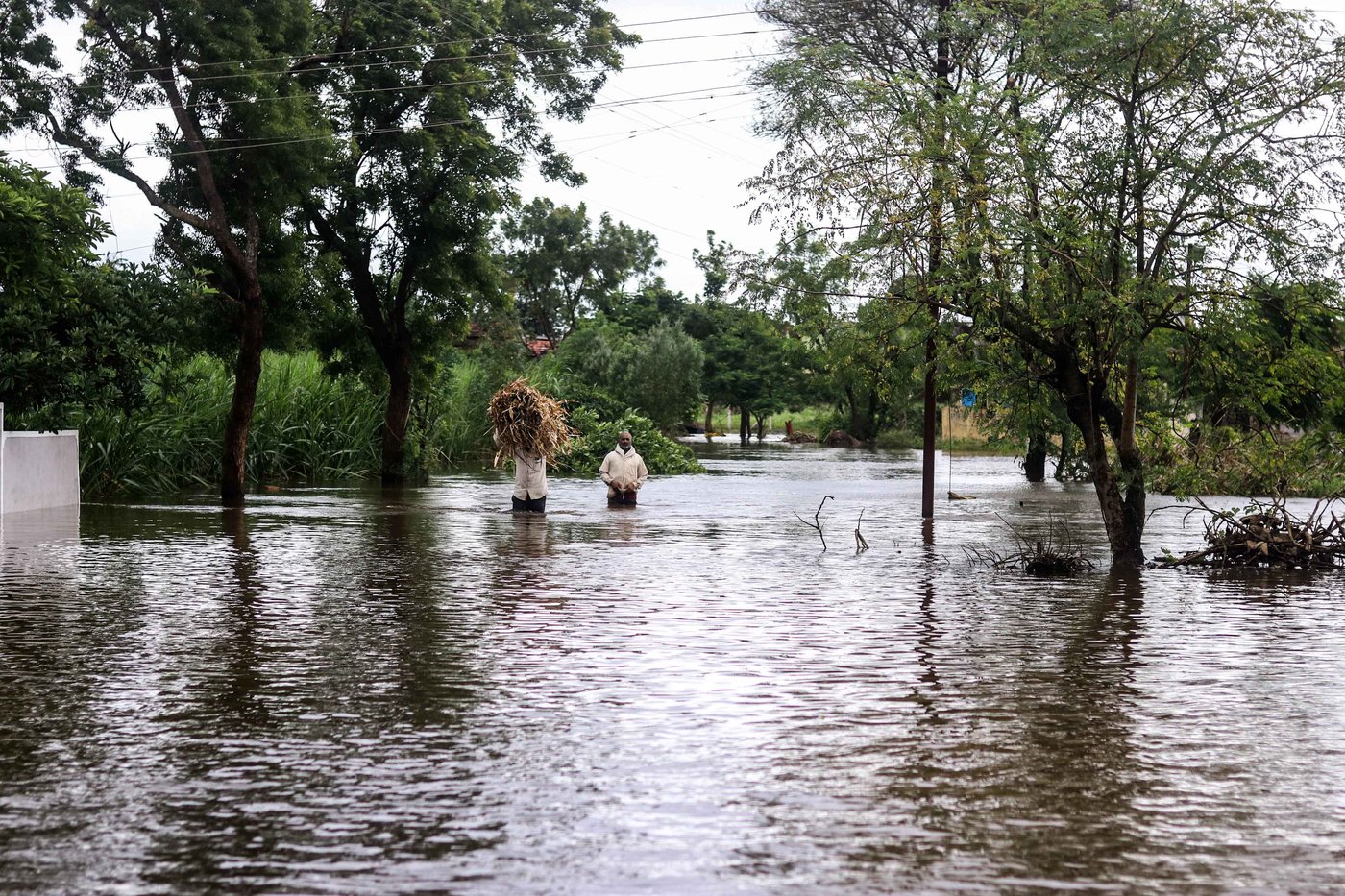 At least 40 people have been killed across Kolhapur and Sangli districts of Maharashtra, over 400,000 evacuated to transit camps, and livestock and crop losses are huge but yet to be properly estimated

When the flood water began to rise, Parvati Vasudeo took along her husband’s ceremonial cap while leaving their house. “We only brought this and the chipli [a musical instrument]. No matter what, we can never leave this cap,” she said. The headgear is adorned with peacock feathers and her husband Gopal Vasudeo wears it while singing devotional songs.

On August 9 though, Gopal, who is in his late 70s, was sitting in a corner in a school room, clearly in despair. “Three of my goats have died and one that we rescued will also die because it is ill,” he said. Gopal belongs to the Vasudeo caste, a community of worshippers of Lord Krishna, who go door to door singing devotional songs to collect alms. In the monsoon months, he works as an agricultural labourer in his village, Bhendavade, in Hatkanangle taluka of Kolhapur district. “For a month, there was no work in the fields because of heavy rains and now the floods have come again,” he said, nearly in tears.

Farmers in Bhendavade had pushed their kharif sowing to July this year because the rain was delayed – the first showers here usually come by early June. But when it did pour, it took just a month for water to drown the soyabean, groundnut and sugarcane crops.

Asif had not anticipated how his drone – which he uses for wedding photography – could help rescue people: 'We won't let any person die. We are going to save the animals too'.

Bhendavade is one of 200 to 250 villages in just Kolhapur district of Maharashtra (say Press Trust of India reports) ravaged by the floods that started on August 2 and began receding only by August 11.

Kakaso Chavan, Bhendavade’s sarpanch , said that 450 families and around 2,500 people – the village has a population of 4,686 (Census 2011) – had been moved to relief camps in school buildings in and around the village, and to the sarpanch ’s house on the outskirts of the village, where the water didn’t rise.

Vasudeo, along with Parvati and their family, shifted to the government high school in the village on August 3. After four days, when the water started entering the school too, they had to move to a primary school on the outskirts of the village. Parvati, who is in her early 70s, told me on August 9, “We are out of our homes for a week now. We will have to stay here for a month. Today, one of the younger boys swam out and said that our house has fallen.”

Another young man who swam out was 19-year-old Somnath Pachange – to his house to rescue his cat. “The water is more than eight feet deep on the roads. It has reached 3.5 feet in my home. My cat is afraid of the water and is not coming out,” he said.

“We won't let any person die. We are going to save all the animals too," said 34-year-old Asif Pakale and his friends. Asif had not anticipated how his drone – which he uses for wedding photography – could help rescue people. “We used the drone to find a farmer stuck deep inside the village,” he said.  On August 6, 2019, the people of Bhendavade village arranged a boat from Nilewadi village, around 30 kilometres away, and managed to save the farmer.

Despite the best efforts of local teams like his in Bhendavade, and of National Disaster Response Force personnel in many of the other villages, many animals died in his village. While no one in Bhendavade lost their lives, at least 40 persons were killed by the flood across Kolhapur and Sangli districts, the Pune Divisional Commissioner was quoted as saying in news reports. And over 400,000 were evacuated to transit camps.  Reliable official estimates of the acres of crops lost are yet to be calculated. 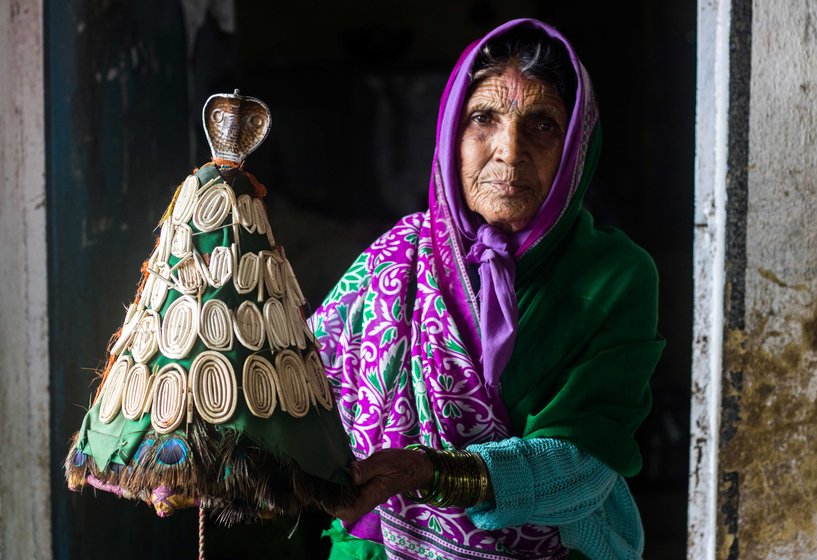 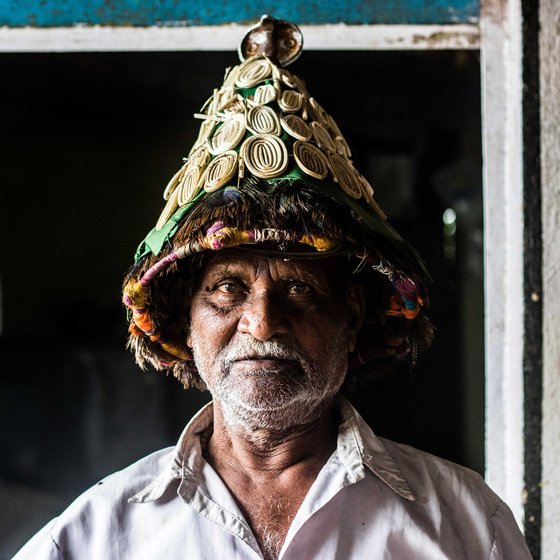 Parvati Vasudeo (left) took along only her husband Gopal Vasudeo’s (right) ceremonial headgear while leaving their house on August 3, when the flood water began to rise 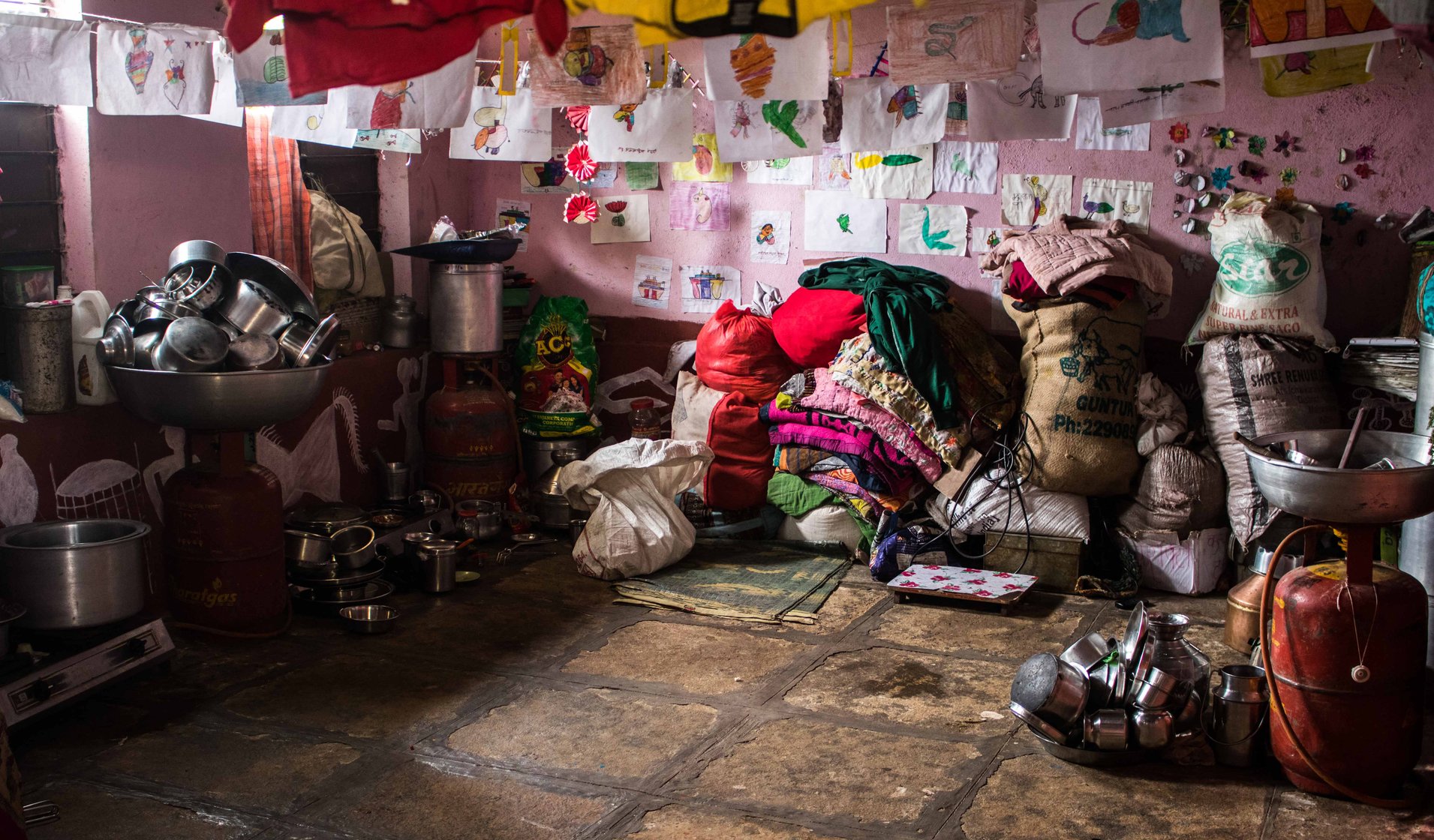 Farm families hastily tried to salvage whatever they could of their modest belongings, and brought them to a relief camp in the local school. The flood water from Warna river (a tributary of the Krishna) swept through Bhendavade. The three-room primary school in the village became a temporary shelter for 20 families, where a few farmers were trying  to look after the cattle, some were waiting for lunch, and a few sat withdrawn, perhaps recalling the 2005 flood. That year, news reports quoting the Maharashtra chief minister say, Kolhapur had got 159 per cent rain in a month – this time, it received 480 per cent rain in nine days. And from just August 5 to August 10, India Meteorological Department data show, Hatkanangle taluka received 450 mm rainfall 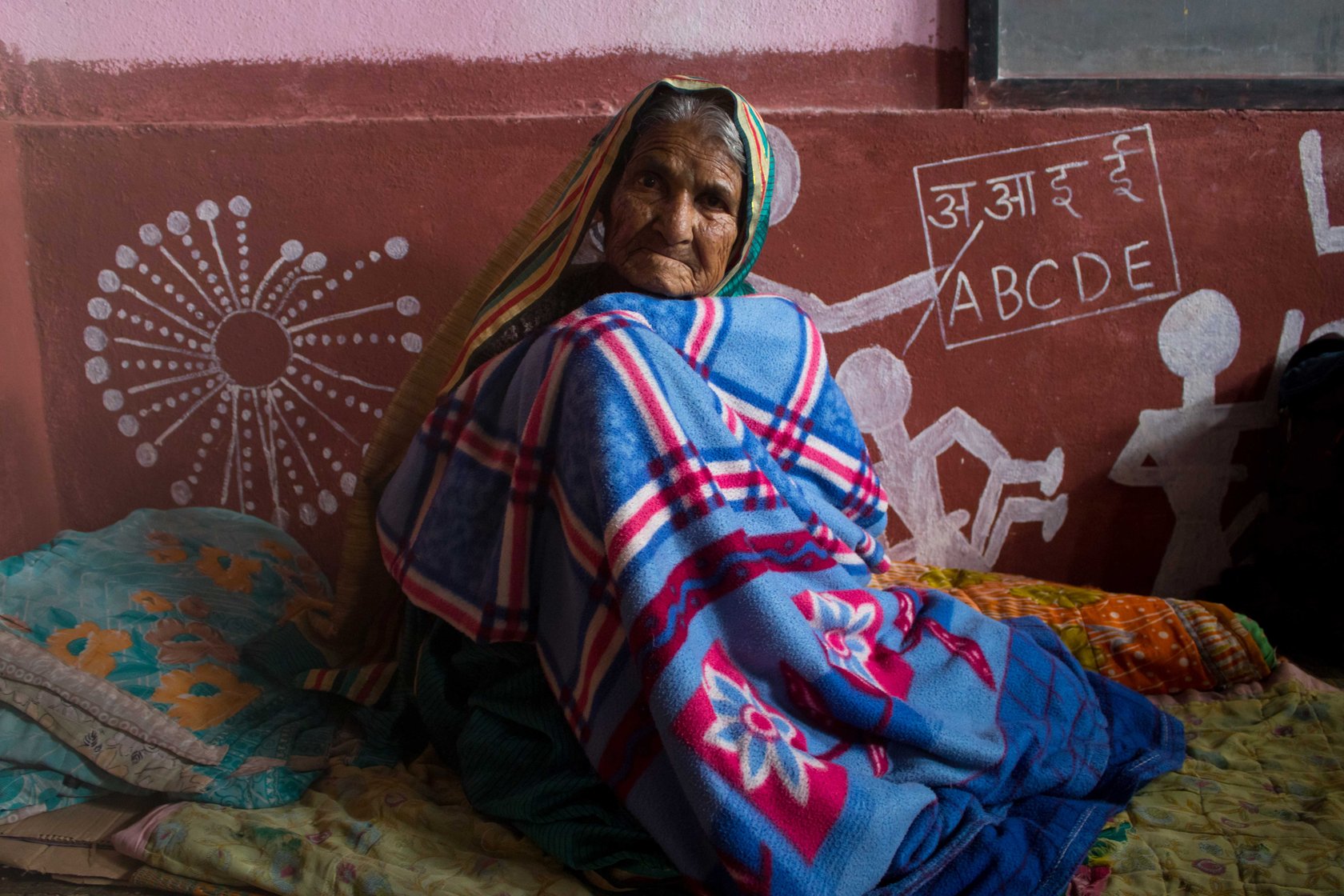 On August 2, Anubai Bhosale, who says she is 95, was shifted to the primary school in the village in a tempo. Shivering, she has covered herself with a blanket. She compares the disaster to the 1953 floods when her house in Dhondewadi village (in Karad taluka of Satara district) had fallen. 'This flood is the worse than the previous ones [2005 and 1953],' she says in a faint voice. She becomes silent as everyone in the schoolroom moves out to check if lunch has arrived. It’s 2 p.m. on August 9. Individuals and local NGOs are bringing food, but the meals cannot be supplied frequently 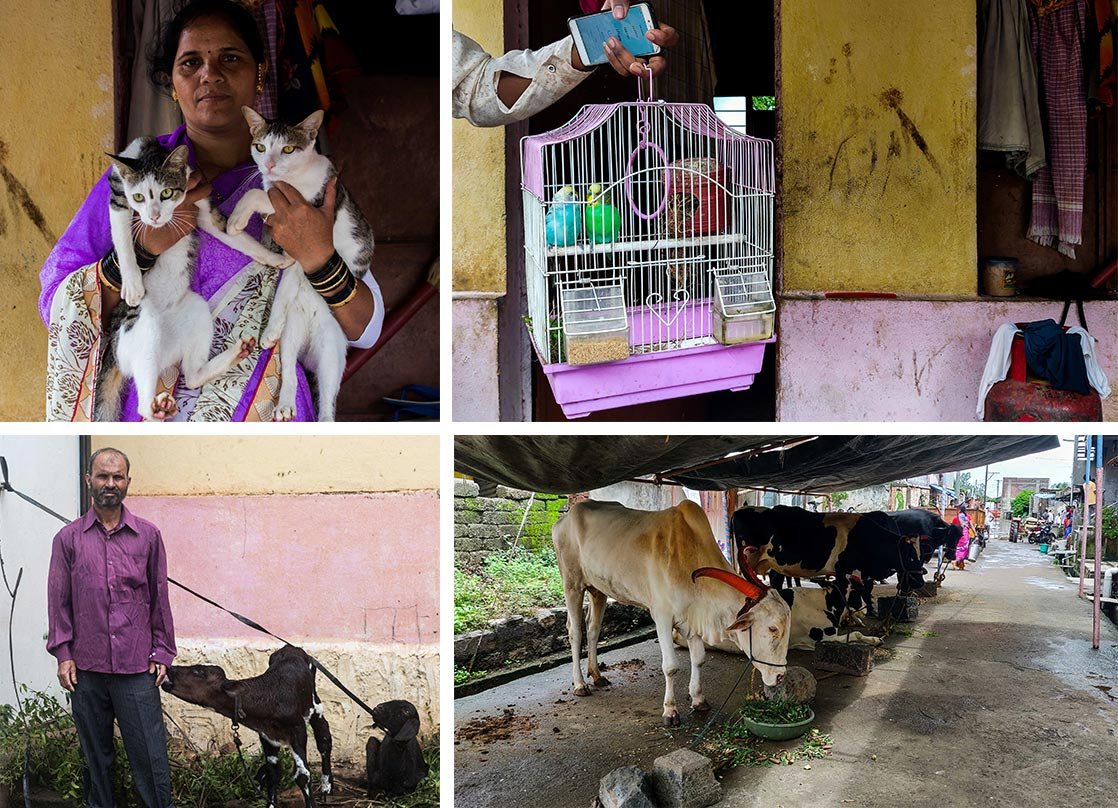 Top left: Usha Patil, a homemaker from Bhendavade, brought along her two cats and a goat while leaving the village. The villagers tried saving every animal they could, but many refused to leave because of the water. Top right: Somnath Pachange, 19, with the pet love-birds he brought while leaving his home. Bottom left: 'None of the cows [who were also brought to the school] are giving milk', says 47-year-old Ajit,  Gopal and Parvati’s son. There’s no fodder for the cattle. They have all become sick and there’s no doctor here.” He is afraid their cow might die soon. Many of the older people are ill too, with colds and fevers.  A lot of animals remain stranded. Farmers are now risking their lives by carrying fodder through four feet-deep water. Local NGOs have also been donating fodder at the relief camps. Bottom right: The flood water entered the cattle shed, after which farmers of Khochi village (around 2.5 kilometres from Bhendavade) shifted the animals to safer places 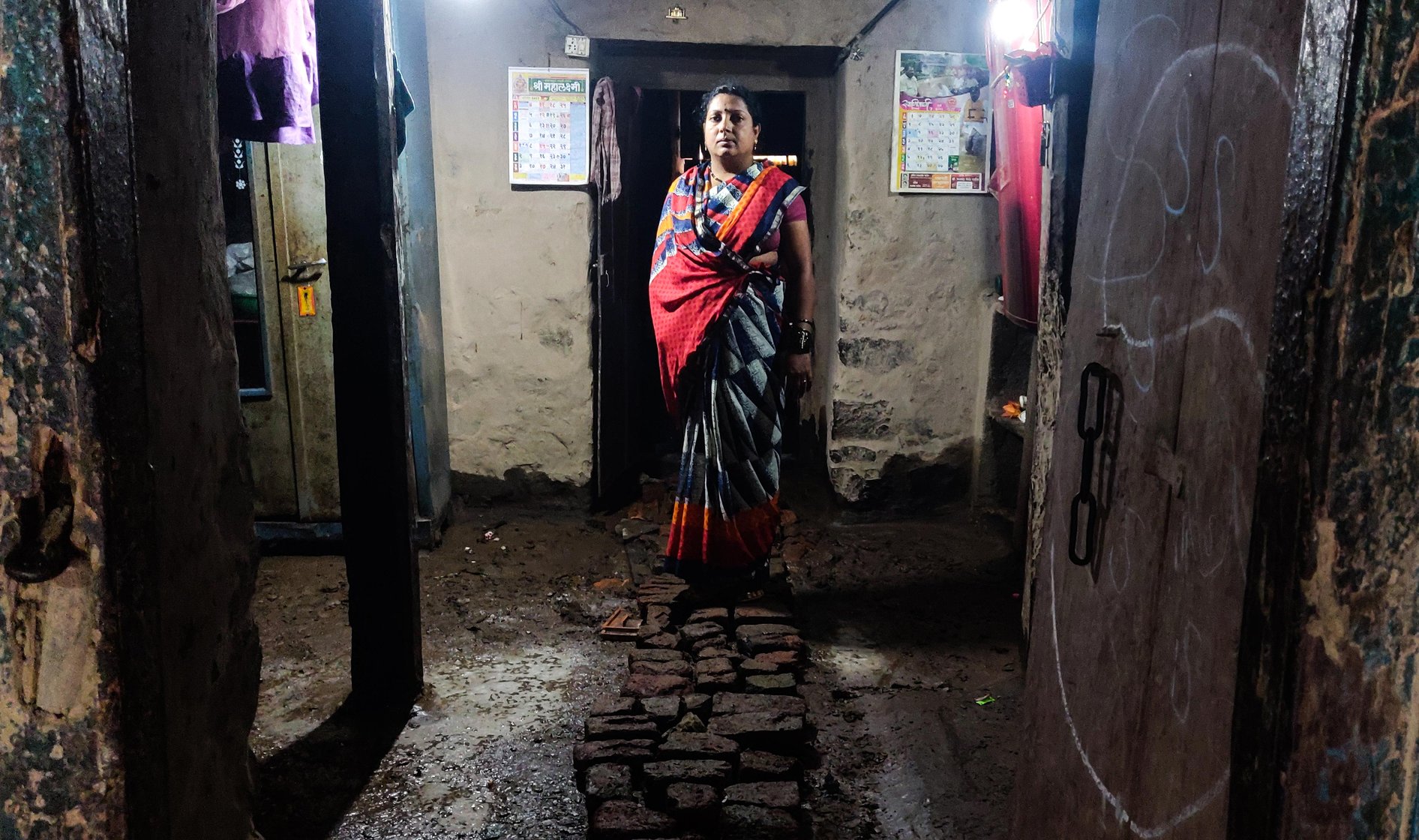 Water from the Warna river entered Archana Ingale’s 2.5 acre field. She estimates a loss of six quintals of soyabean and a quintal of groundnut. On August 9, four days after leaving her house for a relative’s house in the same village, she came back to check the water level and arranged the broken brick pieces as a walkway 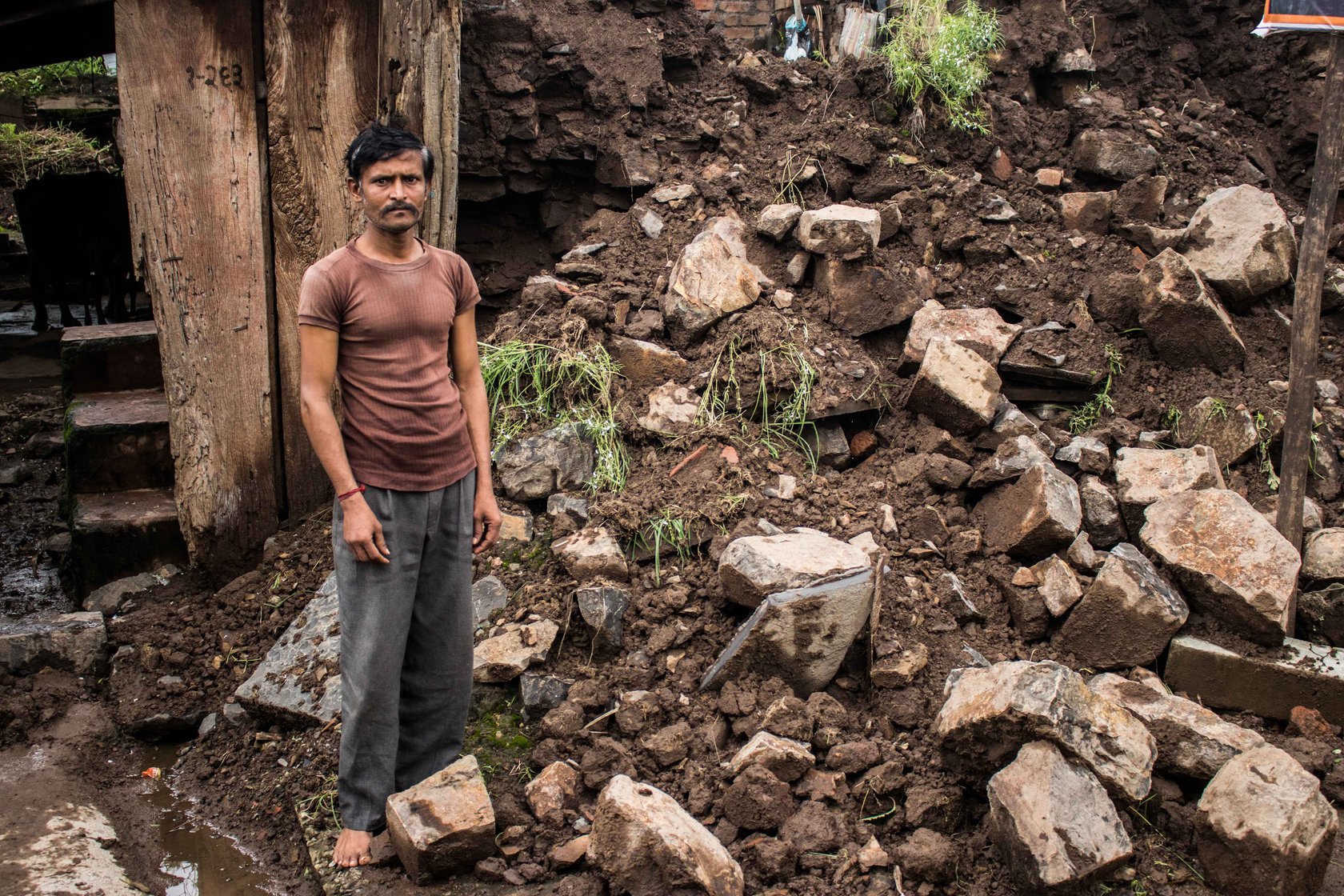 Nagesh Bandwade, 34, says, 'Two days ago, the back wall of my house fell at around 10 in the morning' 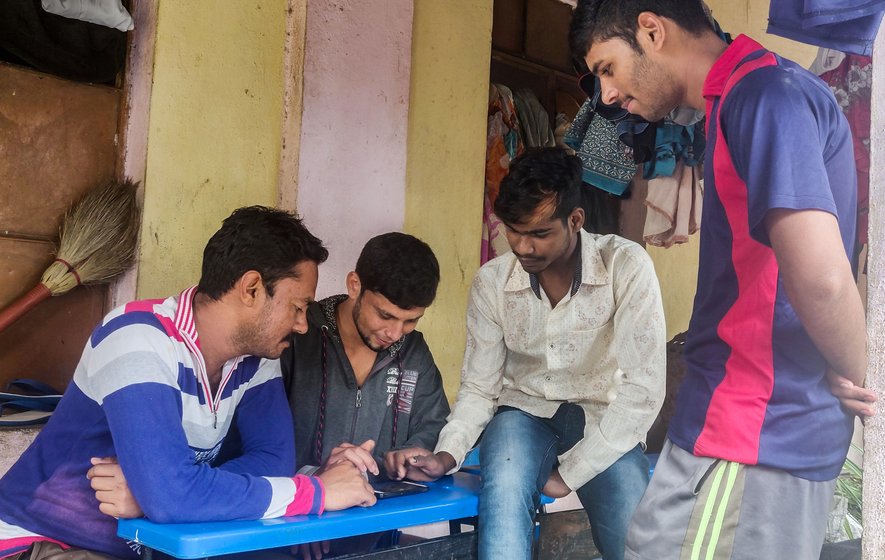 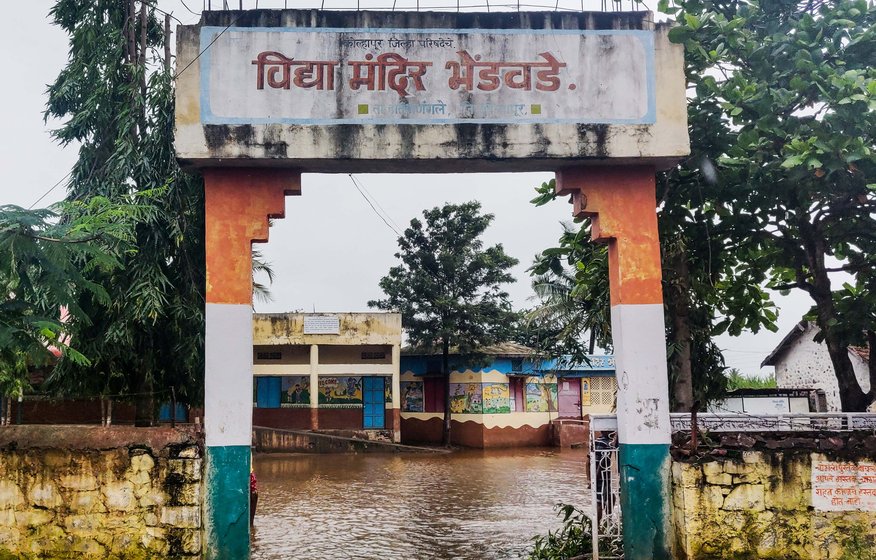 Left: A group of young men playing a game on their smartphones in the primary school in Bhendavade. Right: Some families of Bhendavade were shifted to the high school, but had to leave after four days when the water reached even the school premises on August 6 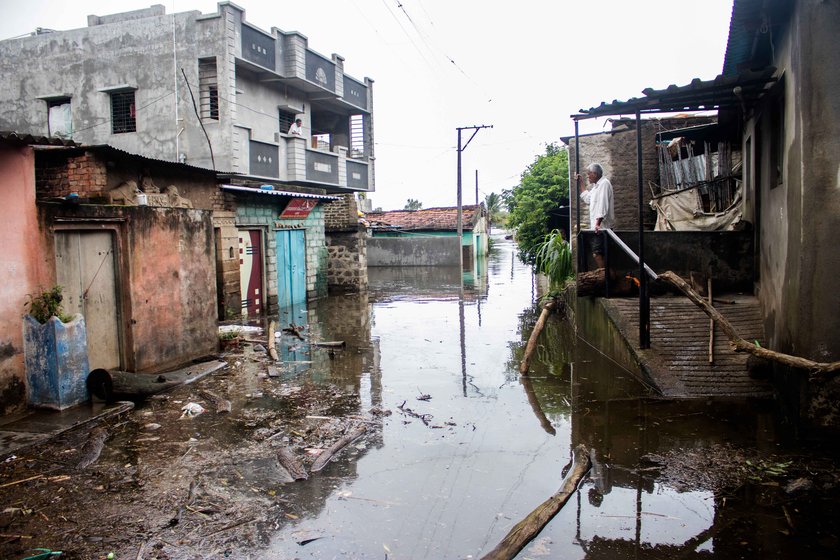 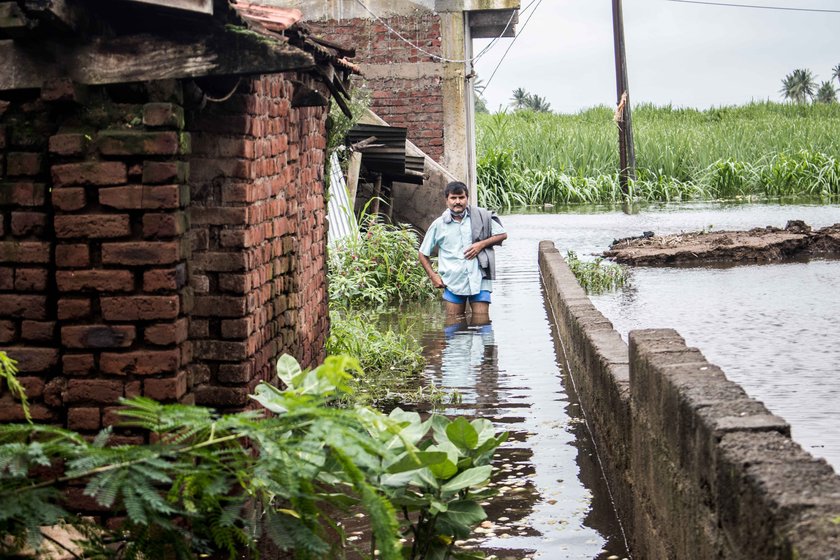 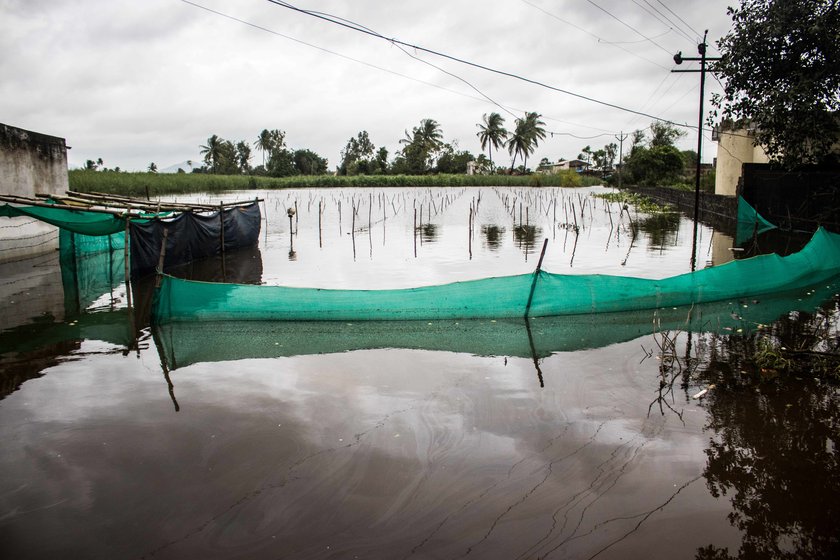 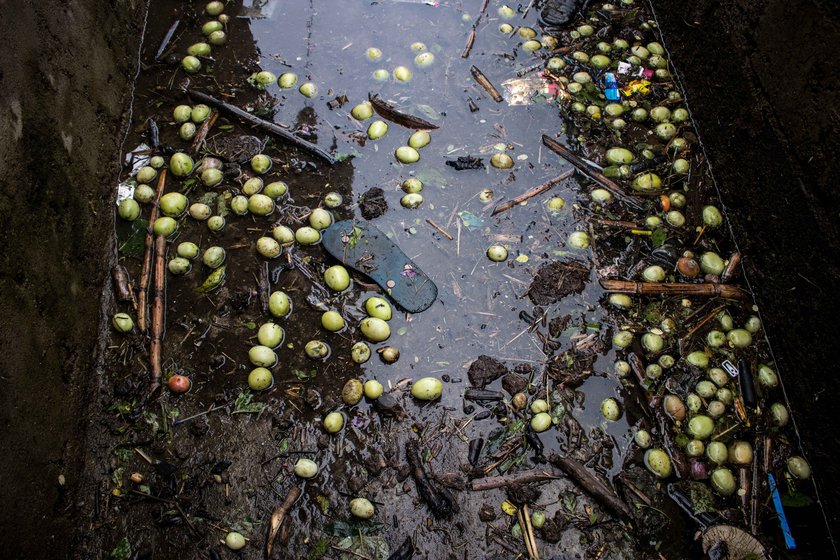 Tomatoes from nearby submerged fields floated into the villages; the Warna river overflows because of excess water from the Chandoli dam 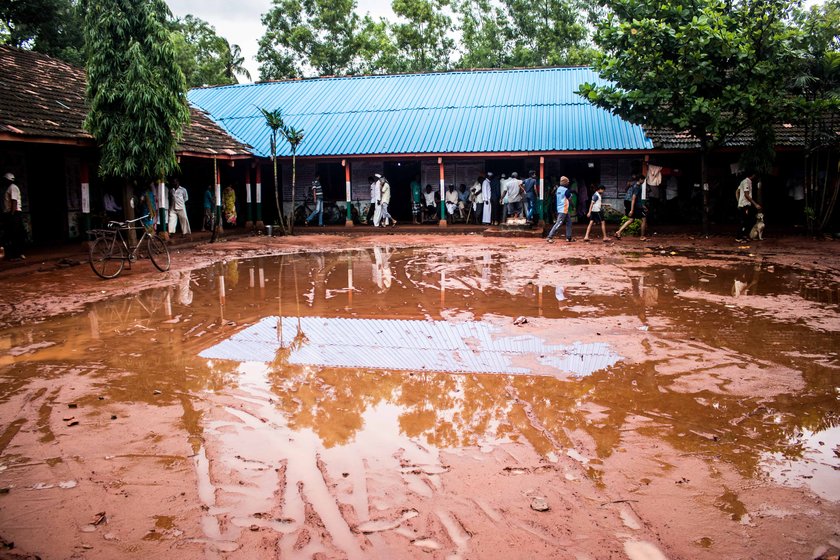 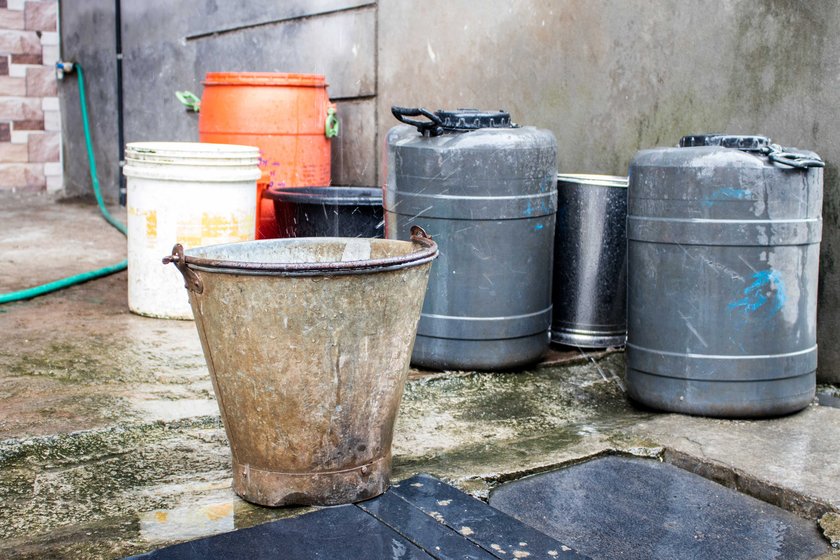 Left: Several families were shifted to the Marathi high school in Khochi. Right: The flooding has created a shortage of drinking water shortage, and people in Khochi  kept vessels outside the house to store clean rainwater. 'We have water everywhere, but none of it can be used for drinking', says Vasant Gurav, a member of the Hatkanangle Panchayat Samiti and a resident of Khochi. 'In the 2005 floods, 200 families were affected [Khochi has a population of 5,832]., but this time it’s around 450. We rescued 900 people in 2005 and it took two weeks for us to go back to the homes' 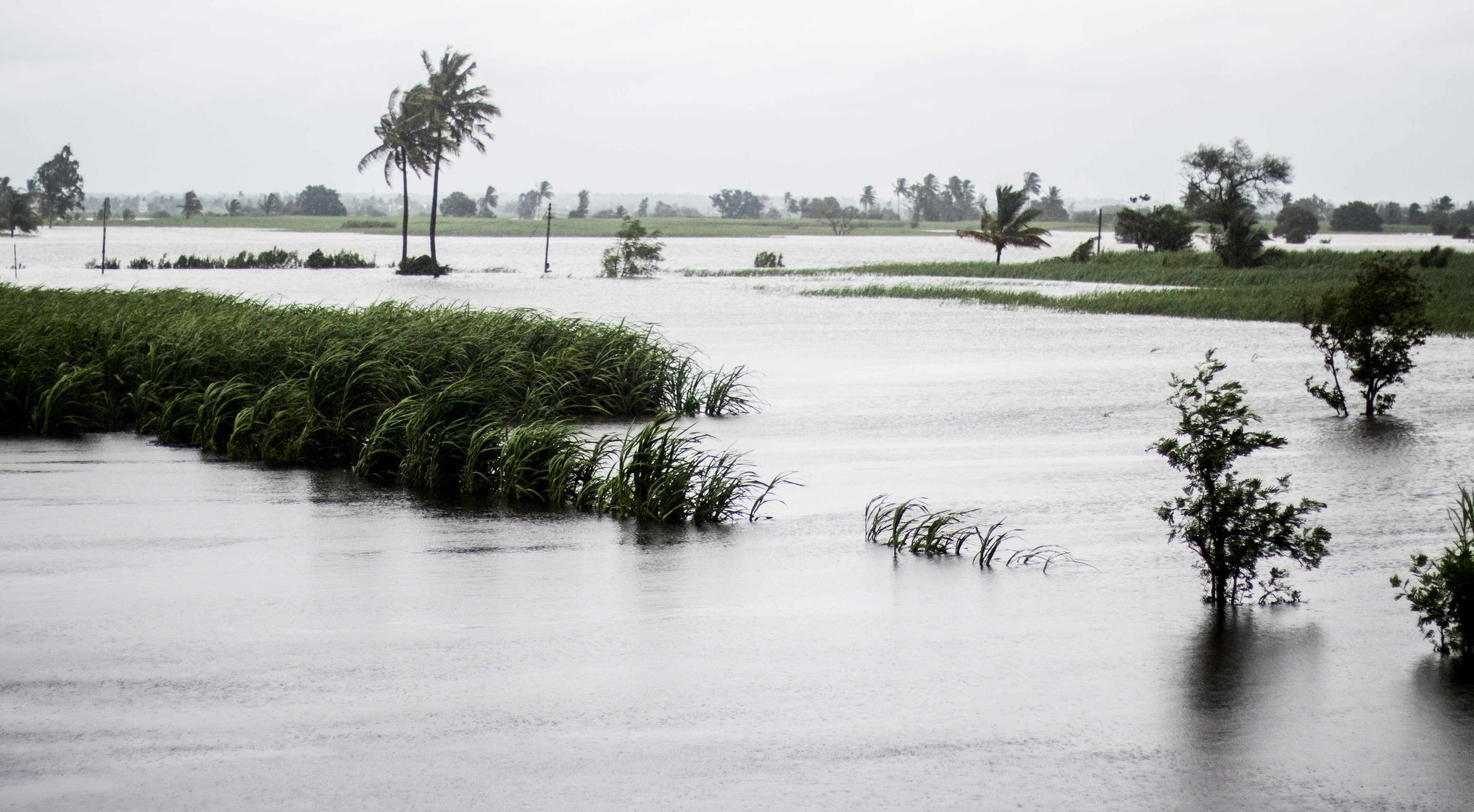 On June 27, 41-year-old Dhanaji Vagare had sown sugarcane on his 27 guntha land (0.675 acre) in Khochi. 'I spent Rs. 14, 000 in total',  he says. Dhanaji’s cane crop cannot be seen now – it’s gone under water – and he estimates a loss of 54 tons. 'After the waters recede, I will first have to see how much soil is left in the field. Then I will get it levelled'. He is anxious that he will have to spend at least Rs. 10,000 to restore the field. Many farmers who planted sugarcane had taken agriculture loans. They are now worried about how they will repay the loans since their fields have gone under water and the entire crop has been destroyed