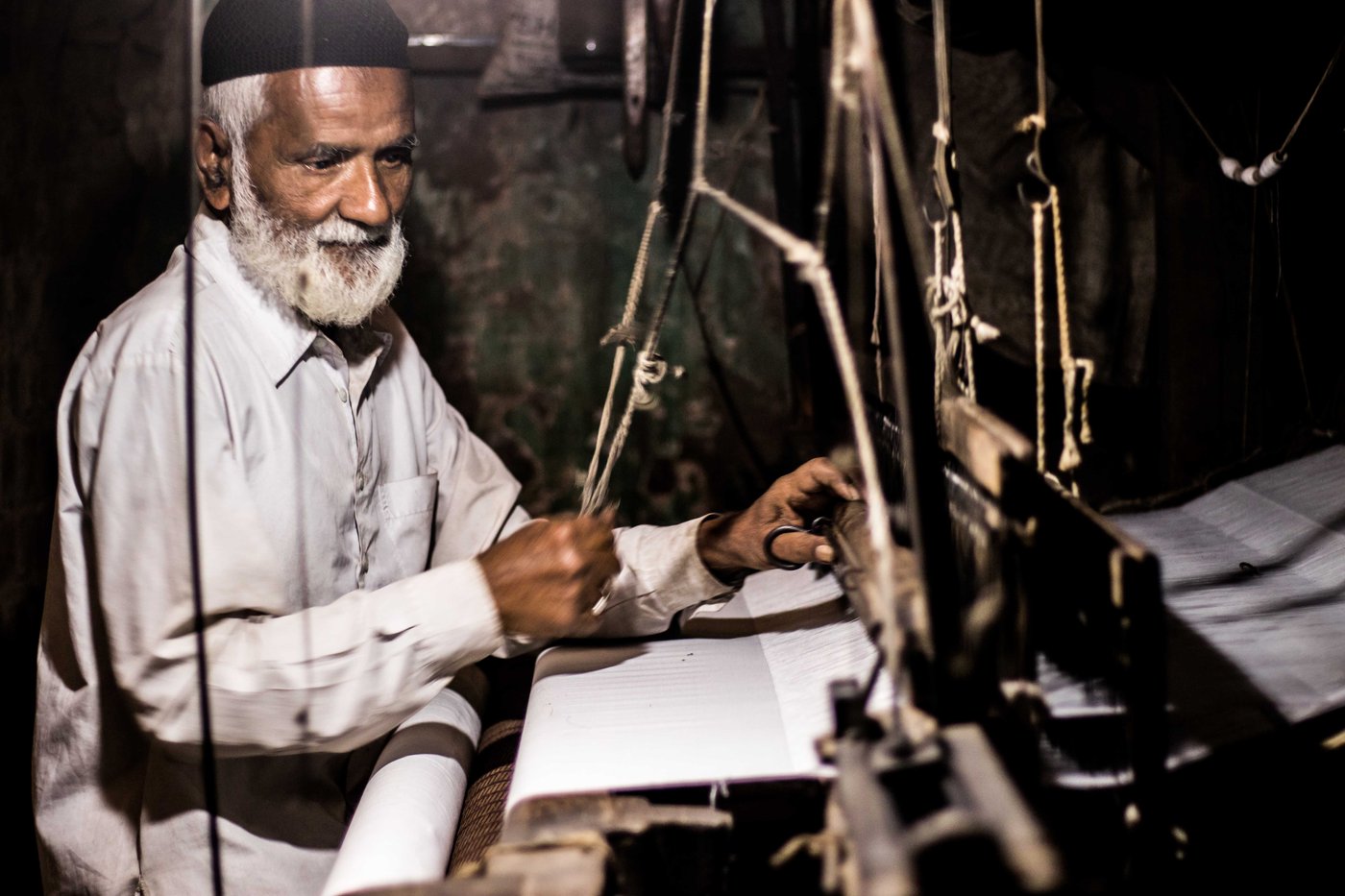 Rendal's weavers: and then there were four

In Rendal village of Maharashtra, a thriving handloom industry has given way, over the decades, to falling demand, powerlooms and a lack of state support – leaving only a few weavers still at their looms

Siraj Momin can’t afford to make an error. One slip and he could lose the Rs. 28 he gets per metre of cloth. He must precisely maintain the number of warp and weft threads. So he looks through a magnifying glass now and then to inspect the weave. And, over the course of six hours, presses the handloom’s two pedals 90 times a minute – or 32,400 times a day. His foot movements close and open the harness, a rectangular frame with 3,500 wires or heddles (this number varies in different machines). The warp thread wound on the metallic beam passes through these wires with the steady foot movement. From this feat emerges a fabric that has 80 warp and 80 weft threads per inch – one metre of it every hour.

Siraj, now 72, has been doing this for more than half a century, since he was 15. His handloom though is nearly twice as old, a family heirloom made of a century-old sagwan (teak) wood. On it, for 57 years, Siraj has choreographed the creation of fabric – the handloom requires a skilled weaver like him to simultaneously scan the thread, coordinate hand-leg movements, and ensure that the fabric has the required number of warp (longitudinal) and weft (transverse) threads.

Only two handlooms, each nearly seven feet tall, now stand in Siraj’s house. He once owned seven, and even hired labourers to operate some of them. “There was a lot of work till the late 1980s,” he says. Three decades ago, he sold three looms to buyers in other villages for Rs. 1,000 each, and after a while donated two to a non-governmental organisation in Kolhapur city.

In Rendal, his village of 19,674 people (Census 2011) in Hatkanangle taluka of Kolhapur district, three generations of Siraj’s family have sat at the handloom, spinning out fabric. After clearing Class 8 around 1962, Siraj too picked up the craft of weaving from his father’s sister, Halima. She was one of the few woman weavers in Rendal. Most other women in the village would hand-spin the thread which was used as weft – as did Siraj’s wife Maimuna, many years later. 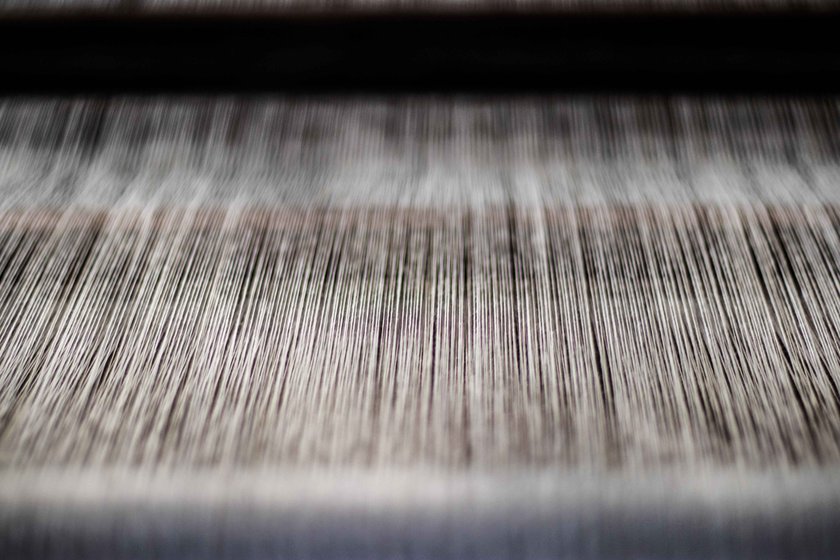 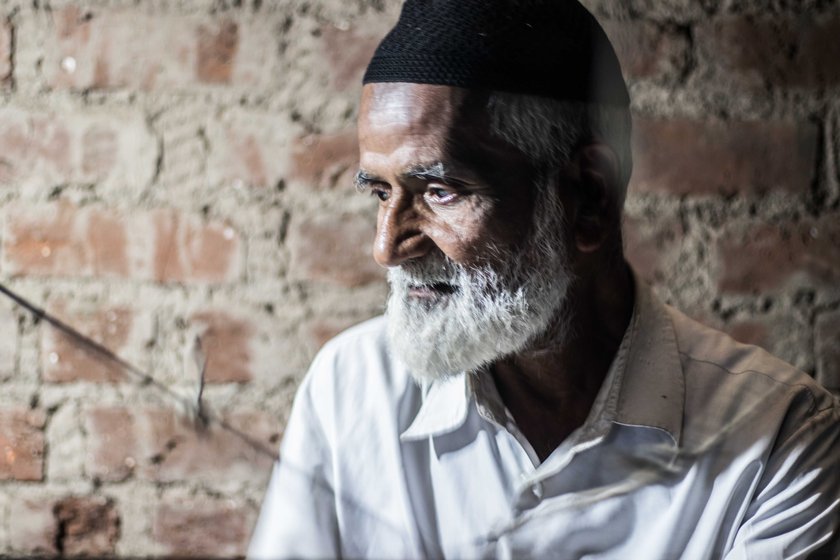 Siraj Momin is the third and last generation of weavers in his family; at the age of 72, he still painstakingly creates fabric on a handloom – with warp threads (left) mounted on a weaver’s beam, which pass through wire heddles .

But in Rendal village, as elsewhere, handlooms slowly gave way to powerlooms – machines that run quick and unceasing, and produce cloth that is cheaper than handloom. Raosaheb Tambe, president of the Powerloom Association of Rendal, says, “The same cloth can be made on a powerloom for less than three rupees a metre.” From 2,000-3,000 powerlooms in Rendal in the year 2000, he estimates there are now 7,000-7,500.

Siraj knows that customers now prefer the cheaper cloth. “If the same cloth is woven on a powerloom, no one will pay more than 4 rupees per metre. We get 28 rupees,” he says. Handloom cloth costs more because of the weaver’s skill and effort, as well as its quality. “People don’t understand the value and quality of hand-woven cloth,”  Siraj adds. A single labourer can handle at least eight powerlooms, whereas one weaver works each handloom, paying attention to every thread. This makes each piece of hand-made fabric unique, he believes.

With the march of the powerloom and the passage of years, the handloom weavers of Rendal have tried to adapt. Traditionally, the weavers here produced nauvari sarees (a little over eight metres long). In the 1950s, they wove a saree in four hours and earned Rs. 1.25 for each – by the 1960s, this sum increased to Rs. 2.5. Today, Siraj makes shirting cloth in deference to market demand. “It began two decades ago, after the cooperative societies in the village shut down,” he says.

The Automatic Handloom Co-operative Vinkar society and the Hathmagh Vinkar Co-operative Society, were intermediaries between the weavers of Rendal and the purchasing corporation in Solapur city,  the Paschim Maharashtra Hathmag Vikas Mahamandal. The societies shut down in 1997, Siraj recalls, because of the decline in the demand for handloom sarees.

To continue to get raw material and sell his woven cloth, Siraj then enrolled at a sub-centre of the Karnataka Handloom Development Corporation (KHDC) in Koganoli village in Chikodi taluka of Belgaum (now Belagavi) district in Karnataka. He shows me the enrollment receipt of November 6, 1998 and recollects that 29 weavers from Rendal had paid a refundable deposit of Rs. 2,000 to enroll. Now only four are working the handlooms in his village – Siraj, Babalal Momin, Balu Parit and Vasant Tambe. (See A life measured in metres and yards . )  “Some passed away, a few stopped weaving, and the rest sold their handlooms,” Siraj says. 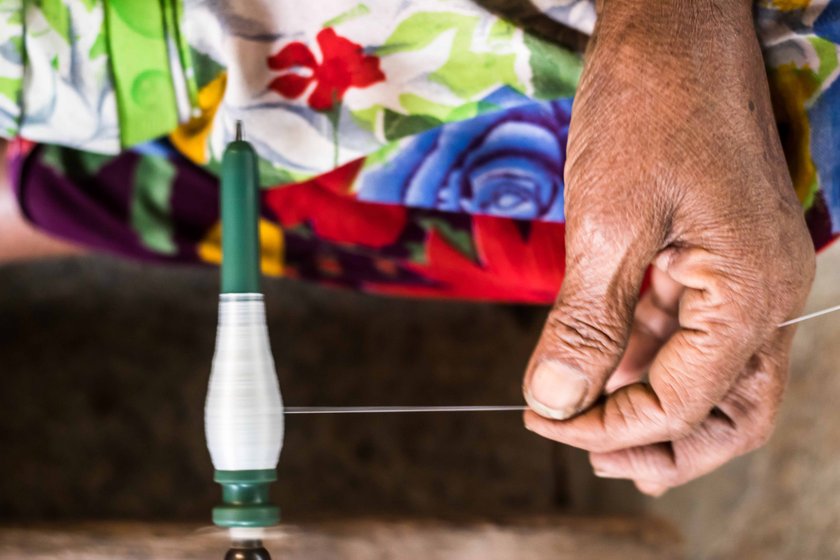 Maimuna Momin, who spins by hand on the pirn, says no one from the younger generation will do this work now

In a shed roughly 200 metres away from Siraj’s house, down a narrow lane with a mud road,  70-year-old Babalal Momin has been weaving for 57 years. In 1962, he inherited 22 handlooms from his father Khutbuddin. Two decades later, Babalal had to sell 21 of these looms for Rs. 1,200 each to buyers in various villages.

Next to Babalal’s shed lies hand-weaving equipment, some in disuse, some broken. Among these is a wooden beam and the dobby (or dabi in Marathi), which is attached at the top of the loom and used to make intricate patterns and designs on the cloth below. “What will I do with it now? None of the weavers use it. The next generation will use it as firewood,” Babalal says.

When powerlooms began to proliferate by the 1970s, the demand for handloom weavers fell, he adds. “Earlier, we worked for four hours and earned enough. Today, even if we work for 20 hours, we can’t earn enough to survive,” he says.

Babalal weaves cloth that has 50 warp and 50 weft threads per inch. For every metre, he gets Rs. 19 from the KHDC. He weaves around 250 metres of cloth in 45 days, which fetches him Rs. 4,750. The price of the woven fabric is determined by multiple factors, including the number of warp and weft threads per inch, and the type and quality of the fabric.

Cooperative societies, too, have tried to adapt to the demands of the market by making efforts to keep handloom cloth as cheap as possible. One way to do this is to mix cotton with polyester. The yarn which Babalal gets from KHDC is 35 per cent cotton and 65 per cent polyester. “We stopped using 100 per cent cotton yarn a decade ago because it becomes costly,” he says.

Babalal’s wife, Razya, 68, says the government has failed the weavers. “Every few years, the government people take our information and write something with chalk on the handlooms [as part of a handloom census]. What’s the use of it if they can’t even give us a good price for the cloth?” Razya used to work with Babalal, winding thread on a pirn or spindle using a pirn-winding ( charkha -like) machine. Around two decades ago, severe back ache compelled her to retire. (The intensely physical work of winding and spinning, usually done by women, often leads to back aches, shoulder pain and other ailments.) 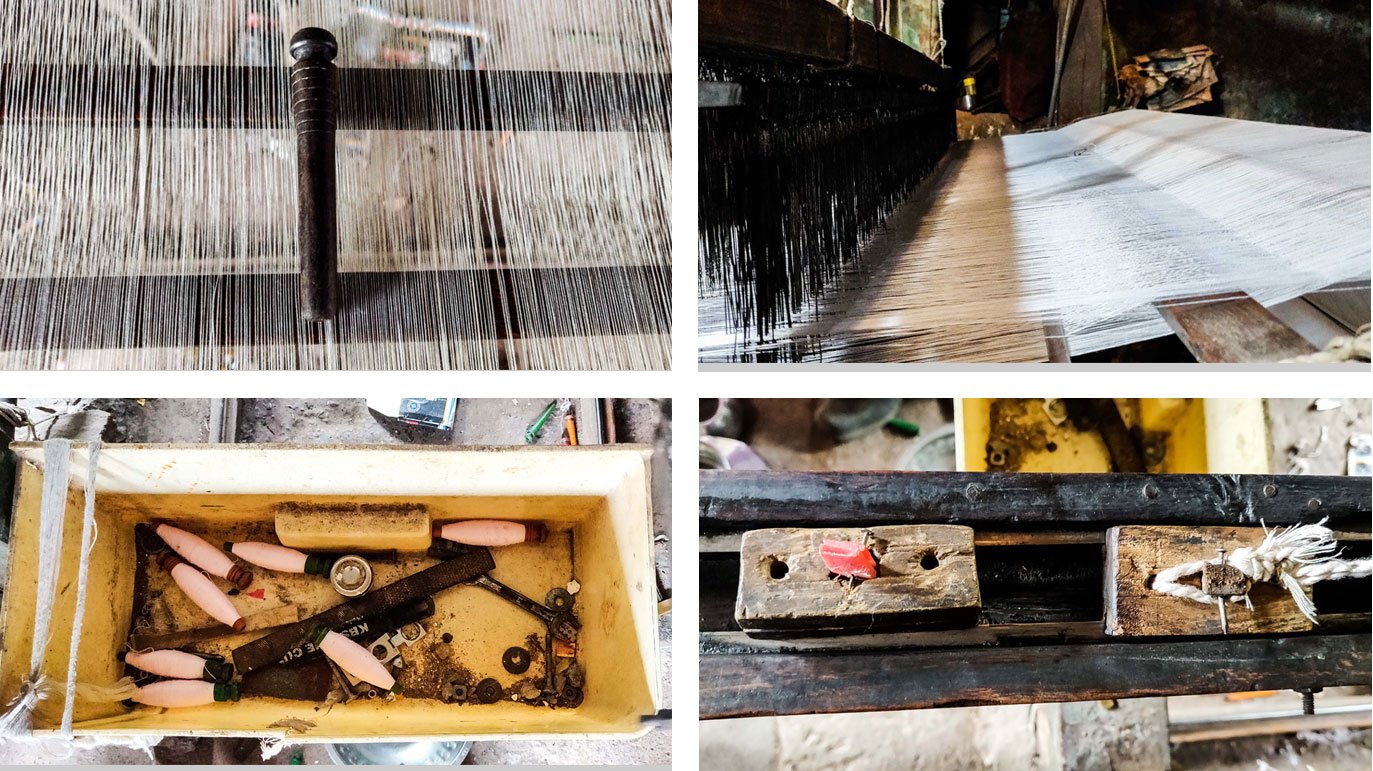 The remains of a vanishing process. Top left: An old wooden spindle in Balu Parit's workshed. Most of these have been replaced by plastic spindles on which the weft thread is wound. Top right: Warp threads passing through the handloom's heddles. Bottom left: Some of the hand-weaving pirns kept near Balu's loom. Bottom right: The wooden block used for tossing the shuttle from one end of the warp to the other

Among them is Rendal’s fourth weaver, 76-year-old Balu Parit. He started out as a labourer in a handloom karkhana –  workshops with multiple looms, once bustling in his village. Balu began working as a weaver in 1962, after training himself to operate the handloom. “For four years, I used to spin the yarn and wind it. Slowly, I started using the handloom, and that’s how I learned to weave,” he says. “After winding the yarn on 300 pirns, we would get one rupee [in the late 1950s],” he says with a laugh. This work took him four days.

Siraj and Maimuna’s older son, Sardar, 43, works as a labourer for a sugar factory at Hupari town in Kolhapur district, and their younger son, Sattar, 41, works for a businessman in Rendal. Their daughter, Bibijan, 41, is married and a homemaker. “There is no market for handloom cloth. So, we decided not to learn this art,” says Sattar.

Babalal’s family, too, has sought work other than weaving. His eldest son, 41-year-old Munir, runs a grocery shop at Rendal. The second son, Jamir, 39, works as an agricultural labourer. The youngest, Samir, 36, owns a meat shop in a nearby village. There’s only Babalal on the handloom now.

“Karnataka [just across the border ] has thousands of handlooms even today. Why can’t the Maharasthra government too keep the handloom industry alive?” Babalal fumes. The Handloom Census shows that Karnataka had 34,606 working looms, while Maharashtra had 3,251 in 2009-10. Of these, just four remain in Rendal.  “After the four of us die, this occupation will also die,” says Babalal Momin, and returns to his loom. 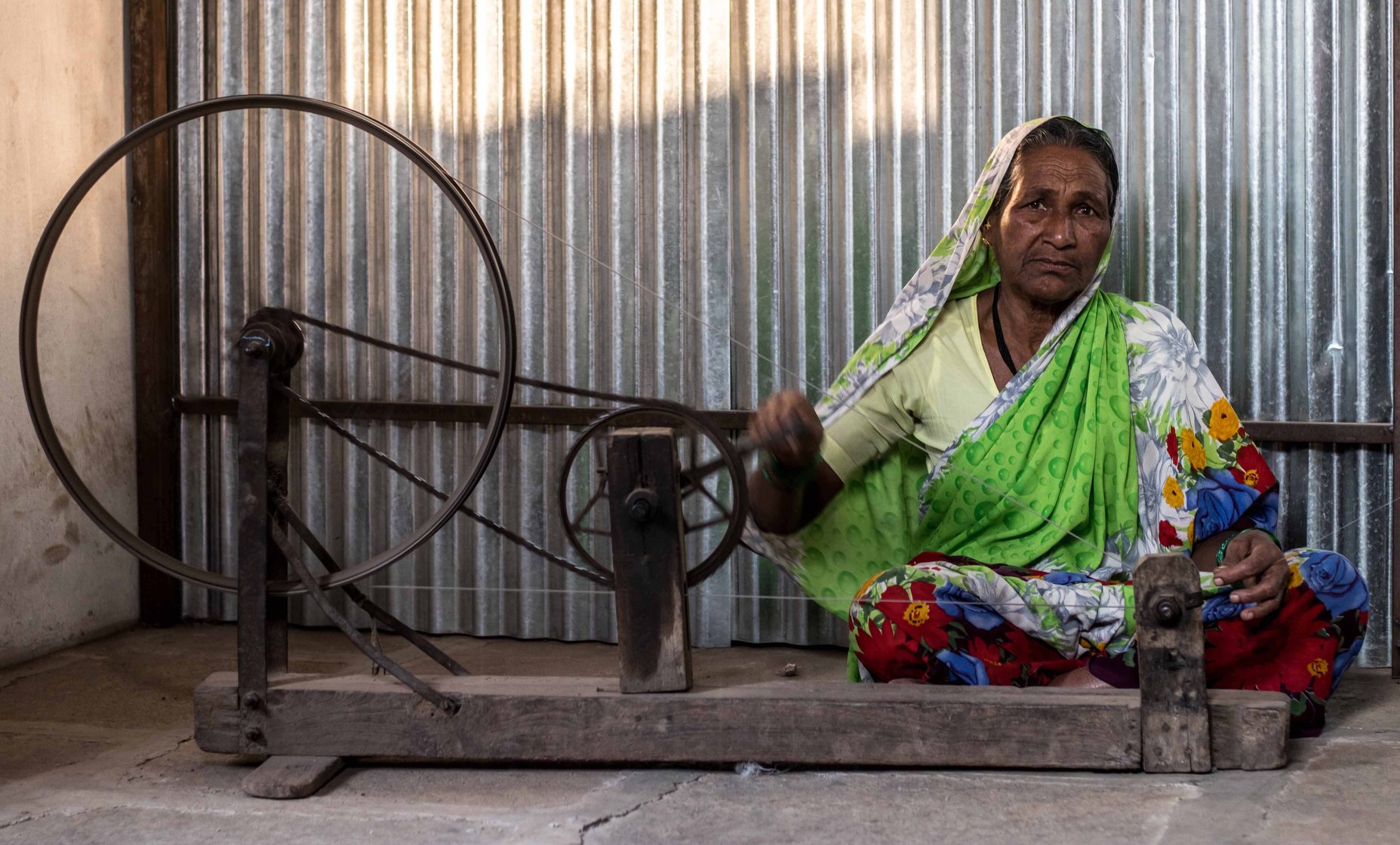 In the fading light of Rendal village's handloom industry, Maimuna Momin hand spins yarn on a pirn using the this charkha -like spinning machine 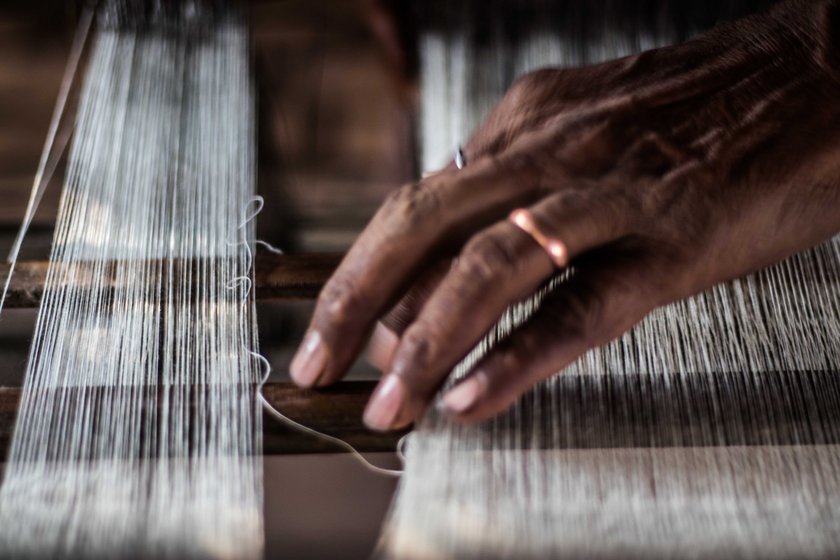 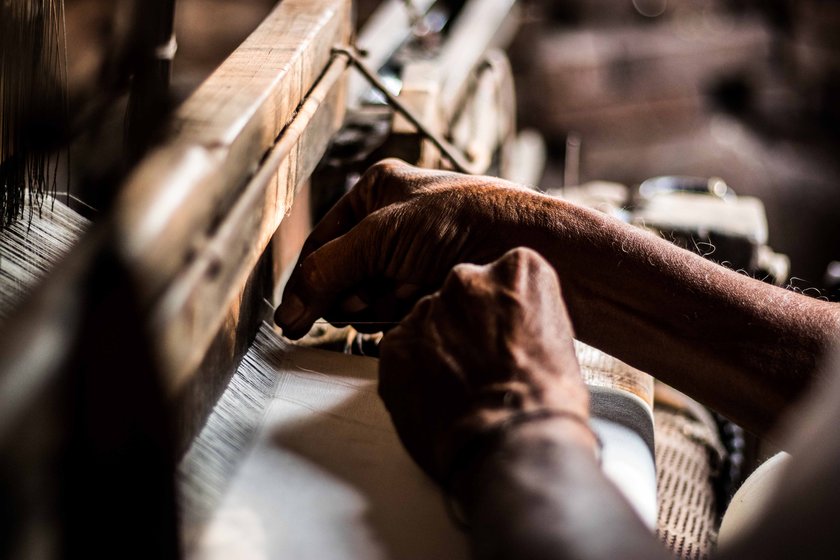 'How will we four weavers protest now?' ask Babalal, talking about the low rates the weavers of Rendal get for their highly skilled work. 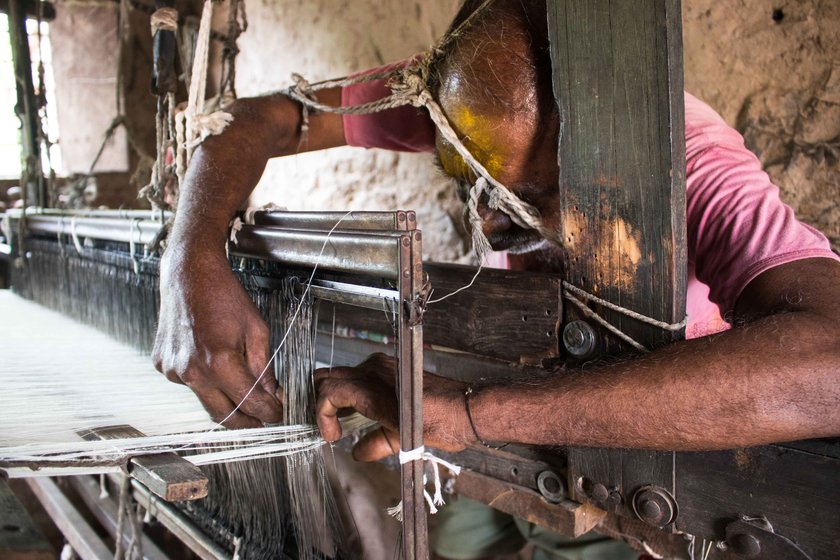 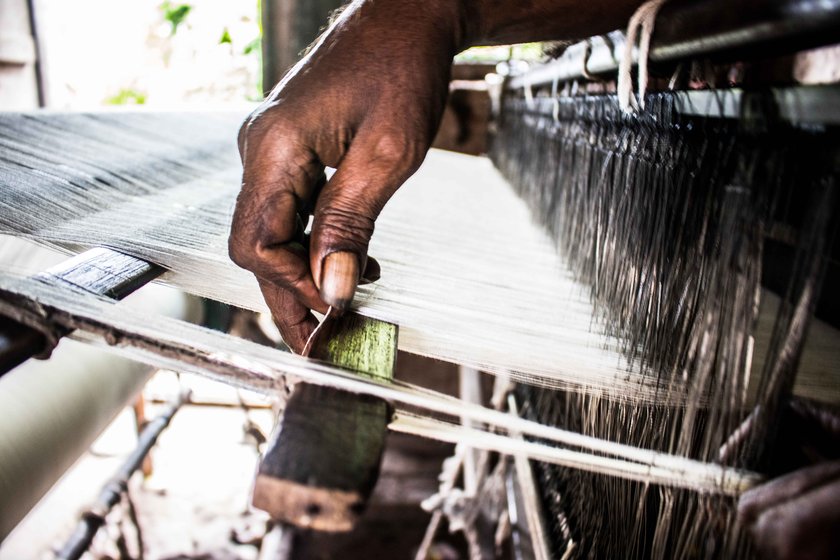 Balu Parit examining the warp thread – without constant vigilant checks, the quality of the fabric will fall 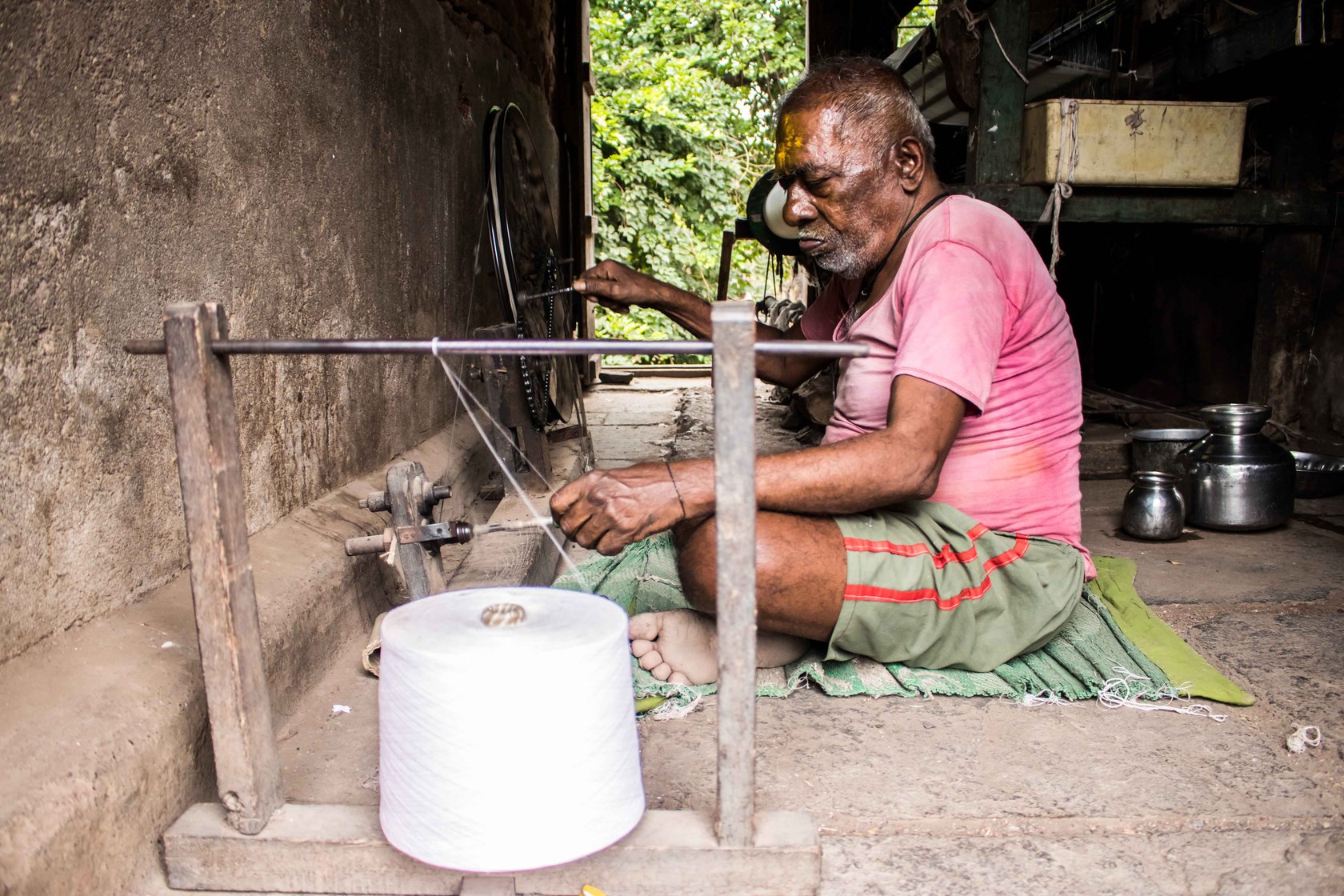 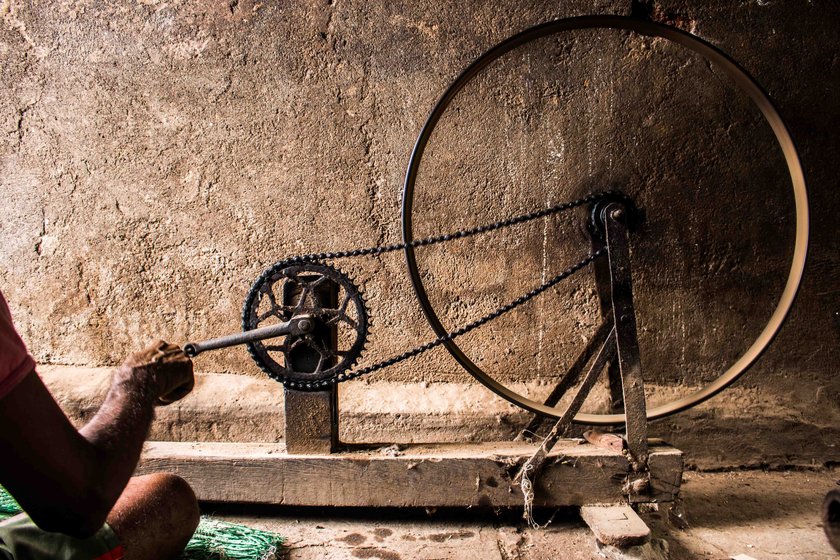 This charkha -like machine (left) is barely used now and century-old wooden weaver’s beams and other equipment  (right) now lie unused and dusty in Rendal, speaking of a time when handloom was at a high