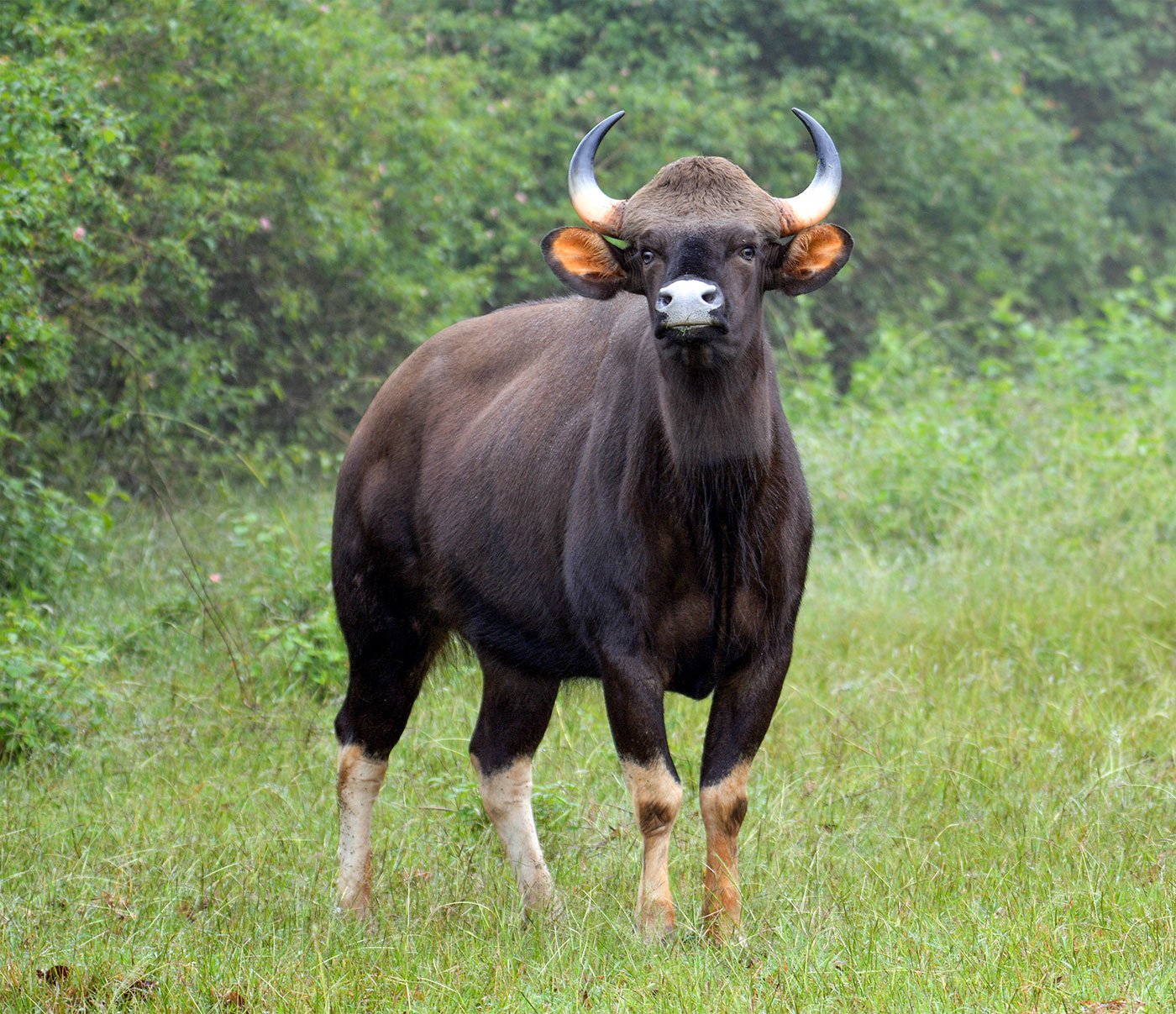 Buffaloed by the climate in Kolhapur

Human-wildlife conflict is escalating in Radhanagari, Kolhapur, where the gaur buffalo are raiding nearby farms. This is spurred by deforestation, cropping changes, drought and fluctuating weather patterns

How and why does a full acre of jowar disappear from your fields at short notice? “It was the first time in two years that I left my village for a week during the season. In that time, they devoured all of it,” says Ananda Salvi. ‘They’ is a herd of gaur ( bos gaurus , also sometimes called Indian bison) – the most massive bovine in existence in the world. Males can stand well over 6 feet at the shoulder and weigh anywhere between 500 and 1,000 kilograms.

Normally peaceful residents of the Radhanagari Wildlife Sanctuary in Maharashtra’s Kolhapur district, the giant bovids have been getting out on to the highways and raiding the farms around them.

“There was no one guarding my field,” says Salvi sadly in Rakshi village. “Luckily, I was able to save my one acre of sugarcane (about 80 tons of cane)].” So how do you ‘save’ anything from a bunch of 1,000 kilo behemoths? With firecrackers.

Two years ago, Salvi started sleeping in the fields every night. “We come at 8 p.m. daily and leave only at 4 a.m. after all the gava (local term for the gaur) have left,” he explains. “And we burst crackers in the fields at night.” That scares off the buffalo, he says, from entering his five acre farm. Several of his neighbours do likewise. Rakshi village, in Panhala taluka , has lost crops to bison for at least two years now.

“We spend nearly Rs. 50 every day in season, buying those crackers,” says Salvi’s wife Sunita. Which adds a whole new element to cultivation costs. “It’s still a risk,” she says, “farmers sleeping in the fields at night.” There’s other wildlife active in the fields in those hours. Snakes, for instance.

People believe the buffalo will soon figure out that firecrackers won’t do them real harm. So some farmers in Radhanagari taluka have begun using electrified fences. “But even those, they’re getting used to,” says Samrat Kerkar, co-founder of the  Bison Nature Club, a Radhanagari-based wildlife NGO. “We have seen gaur placing their hooves or legs slowly on the fence to check if it gives a shock. Earlier, they feared humans, but now they don’t run away so easily on seeing us.”

“We don’t blame the gava ,” says Sunita. “It’s the forest department’s mistake. If the forests aren’t maintained properly, animals will come out.”

The gaur buffalo have increasingly been coming out of the wildlife sanctuary – in search of food and water. They’re seeking, amongst other things, karvi leaves ( strobilanthes callosa ) which seem to be withering in the drying forests.  And also, other sources of water – with the sanctuary’s ponds shrinking. Further, forest guards and field researchers say they are also driven by the declining patches of grasslands within the sanctuary. 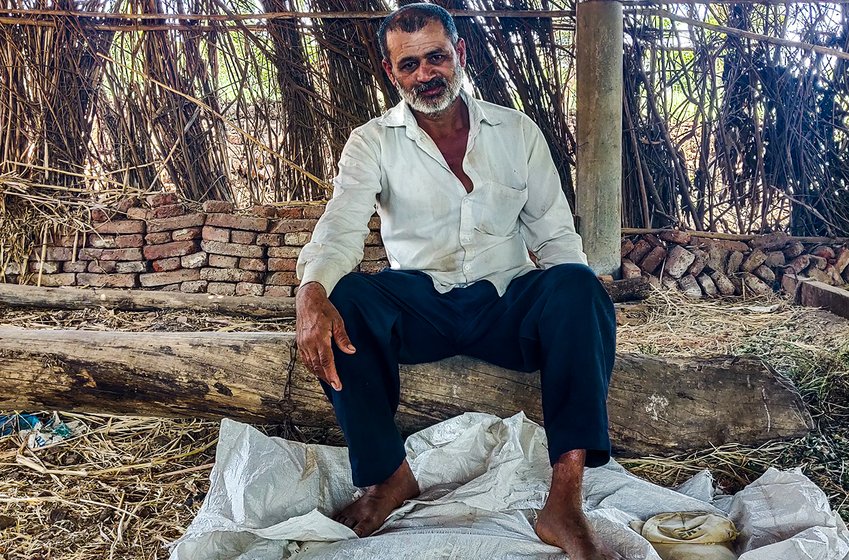 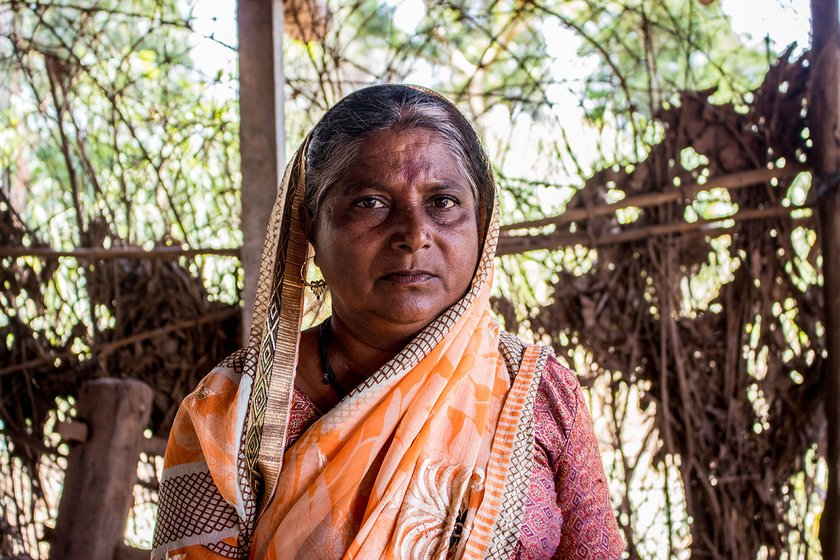 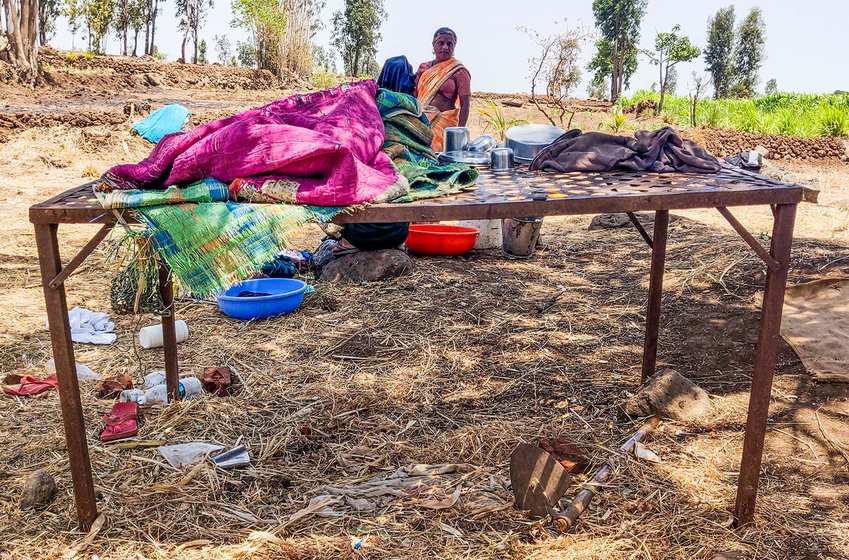 Left: Anand Salvi lost an acre of jowar to a bison raid. Centre: Sunita Salvi says she blames the forest department. Right: Farmers sleep on these metallic cots in the open at night, guarding their fields

Raju Patil, a 50-year-old shepherd, first saw a group of 12 gaur on the Devgad-Nipani state highway a decade ago. He had heard of the wildlife sanctuary, on the outskirts of his village, Radhanagari. But he had never seen the gava .

“Only in this last decade, I’ve seen them coming out of the forest,” he says. Since then, for the people of Radhanagari village, the sight of the massive herbivores crossing the roads has become commonplace. Villagers have shot videos of the animals on their cellphones. The gaur have started entering farms in Radhanagari, Shahuwadi, Karvir, and Panhala talukas in Kolhapur district to eat sugarcane, s halu (jowar or sorghum), corn and rice.

And to drink water – which has become increasingly scarce for them within the forest.

In Radhanagari taluka , villagers assert, the gava have made forays outside the forest only during the past 10-15 years. In Panhala taluka , it’s a more recent occurrence. Yuvraj Nirukhe, 42, from Rakshi village whose farm is near the forest says, “We’ve seen the gava only in the last two years. Earlier wild pigs used to attack our crops.” Since January, a group of 12 bison have thrice raided his 0.75 acre plot. “I lost at least 4 quintals of shalu and now I’m afraid to cultivate rice in this rainy season,” he says.

“The weather cycle has changed completely,” says Prashant Tendulkar, forest range officer for Radhanagari. “Earlier, it used to rain at least once in March and April, which would recharge the ponds. If we are going against nature, who should be blamed? Some 50-60 years ago there was the forest land, then grazing grounds, farms and then the village. Now people have started settling on these lands and are slowly reaching towards the jungle. The land between forest and village is being encroached.”

There’s been ‘encroachment’ of a more destructive nature – bauxite mining. It’s been on and off over some decades.

“Open cast bauxite mining devastated Radhanagari over many years,” says Bittu Sahgal, founder editor of Sanctuary Asia . “There was great resistance to it, but mining companies such as INDAL [later merged with HINDALCO] had far greater clout in the corridors of power than the protestors did. The companies were writing policy in government offices. Grazing grounds, water sources, all these suffered grave damage from mining activity.”

Indeed, since 1998, both the Bombay High Court and the Supreme Court of India have come down strongly on such activity, more than once. As late as October 2018, the apex court had ordered the presence of the chief secretary of the Maharashtra government over the ‘total lack of concern’ the state showed in the matter. 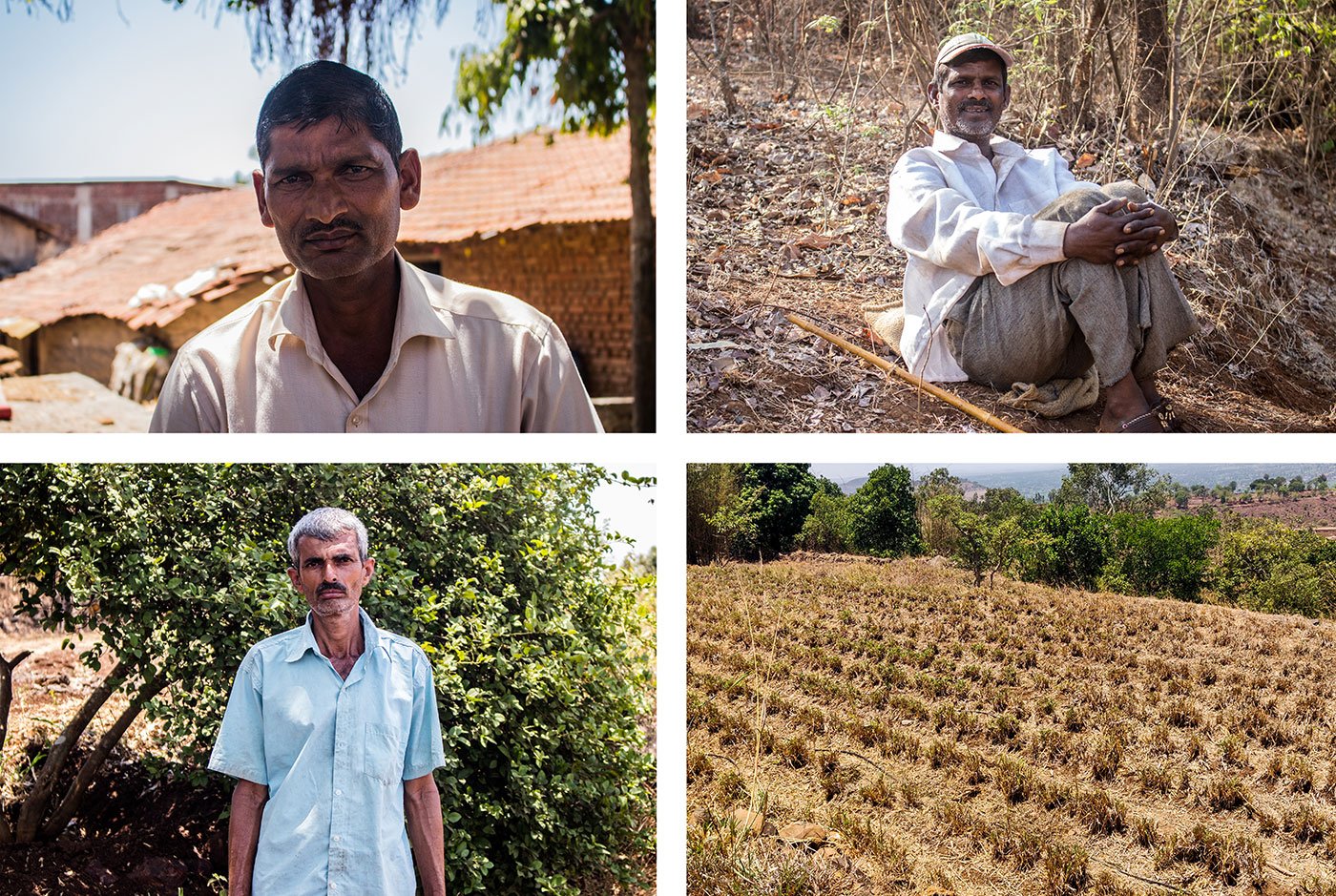 A 2012 study by researchers from Shivaji University, Kolhapur, pointed to the continuing long-term effects of mining. Their paper , Studies On The Impact Of Bauxite Mining Activities On Environment In Kolhapur District, noted that “legal and illegal mining activity has initiated serious environmental degradation in the region. Though mining initially provided job opportunities for limited inhabitants and generated revenue to Government, it would last only for a short period. However, the damage caused to the local ecology as a result of the changed land use is permanent.”

Just 24 kilometres away from Radhanagari is another wildlife sanctuary – Dajipur.  Both were a single unit till the mid-1980s when they were split up. Together, they cover an area of 351.16 square kilometres. A patch of laterite plateau in Dajipur, called Savrai Sada, also holding a lake, remains one of the major sources of food and water for animals and birds in the region. But much of the lake had shrunk or dried up by May this year.

Also, “most of the deforestation here has happened in the past decade. This has affected the [climate] cycles,” says Amit Sayyed, a wildlife researcher and president of the Wildlife Protection and Research Society.

Savrai Sada is one of the sites where the forest department has created artificial ‘salt licks’ for animals. A salt or mineral lick is a place from where animals can consume essential nutrients. Salt and konda (husk/bran) have been stored at some sites in both Dajipur and Radhanagari.

There’s another, less benign form of human intervention than salt licks: the spread of sugarcane. Kolhapur district, with its rich rainfall in some talukas , was for decades hospitable to sugarcane. It’s growth, though, is a bit alarming. Data from the state Sugar Commissionerate and gazetteers show that cane was cultivated on 40,000 hectares in Kolhapur in 1971-72. Last year, 2018-19, it covered 155,000 hectares –  a 287 per cent increase. (Sugarcane cultivation in Maharashtra takes between 18-20 million litres of water per acre). 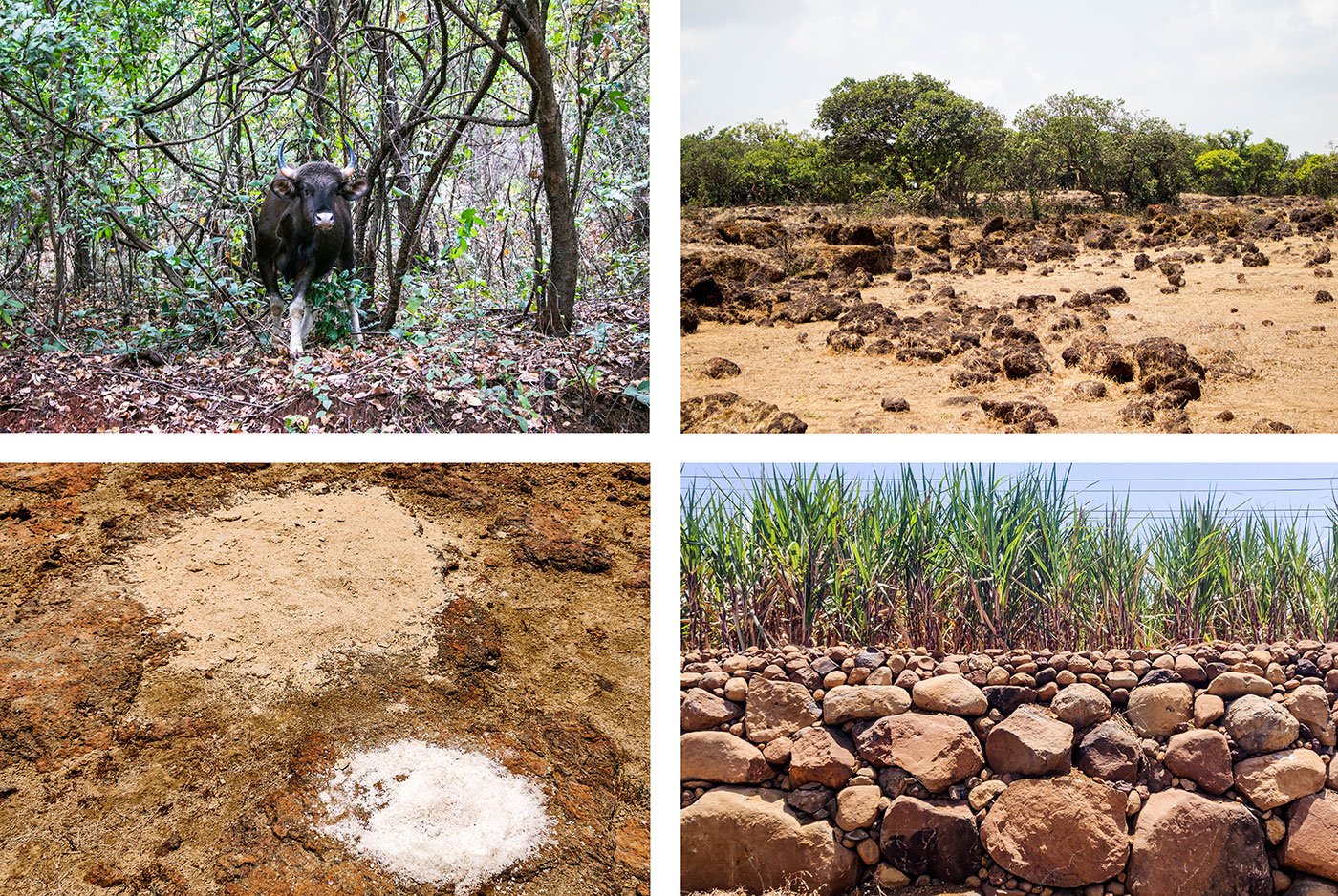 Top row left: A gaur isolated from its herd. Right: The laterite plateau and the retreating forest. Bottom row left: Salt and konda (husk/bran) kept as mineral lick for the wild animals at Savrai Sada. Right: A sugarcane farm near the sanctuary

All these processes have had an inevitable impact on land, water, forest, flora and fauna, weather and climate in the region. The forest types in this sanctuary are southern semi-evergreen, southern moist-mixed deciduous and southern evergreen forest. While the impact of all the changes goes way beyond these sanctuaries, they have had profound consequences for their denizens. Human activity is growing, but the gaur herds are not.

Believed to have had over 1,000 of these magnificent animals some decades ago, Radhanagari wildlife sanctuary now has 500, according to the forest department of Maharashtra. Forest range officer Prashant Tendulkar’s personal estimate is 700. In India, the gaur is classified under Schedule 1 of the Wildlife Protection Act of 1972, which gives absolute protection to the listed species. Offences against these animals invite the highest penalties. Gaur also figure in the ‘Red List’ of threatened species of the International Union for Conservation of Nature, which classifies them as ‘vulnerable.’

The gaur are on the move, but: “they [the forest department] do not have data on their migration record,” says Amit Sayyed. “Where are they going? What kind of corridor are they using? What kind of groups? How many individuals in a group? If they are monitoring the groups, then these kinds of things will not happen. Water bodies should be set up in these corridors.”

India Meteorological Department data show that rainfall in June 2014 in Kolhapur district was 64 per cent below the normal average for that month. In 2016, minus 39 per cent. In 2018, it was plus one per cent above the average. In July 2014, it was 5 per cent above the average for that month. In July the next year it was minus 76 per cent. This year, rainfall was above average by 21 per cent for the period June 1 to July 10. But, as many here point out, this April and May saw no real pre-monsoon showers. “The rainfall pattern has become erratic over the past decade,” says Kerkar. That has sharpened the problem of fewer and fewer perennial water sources in these forests. 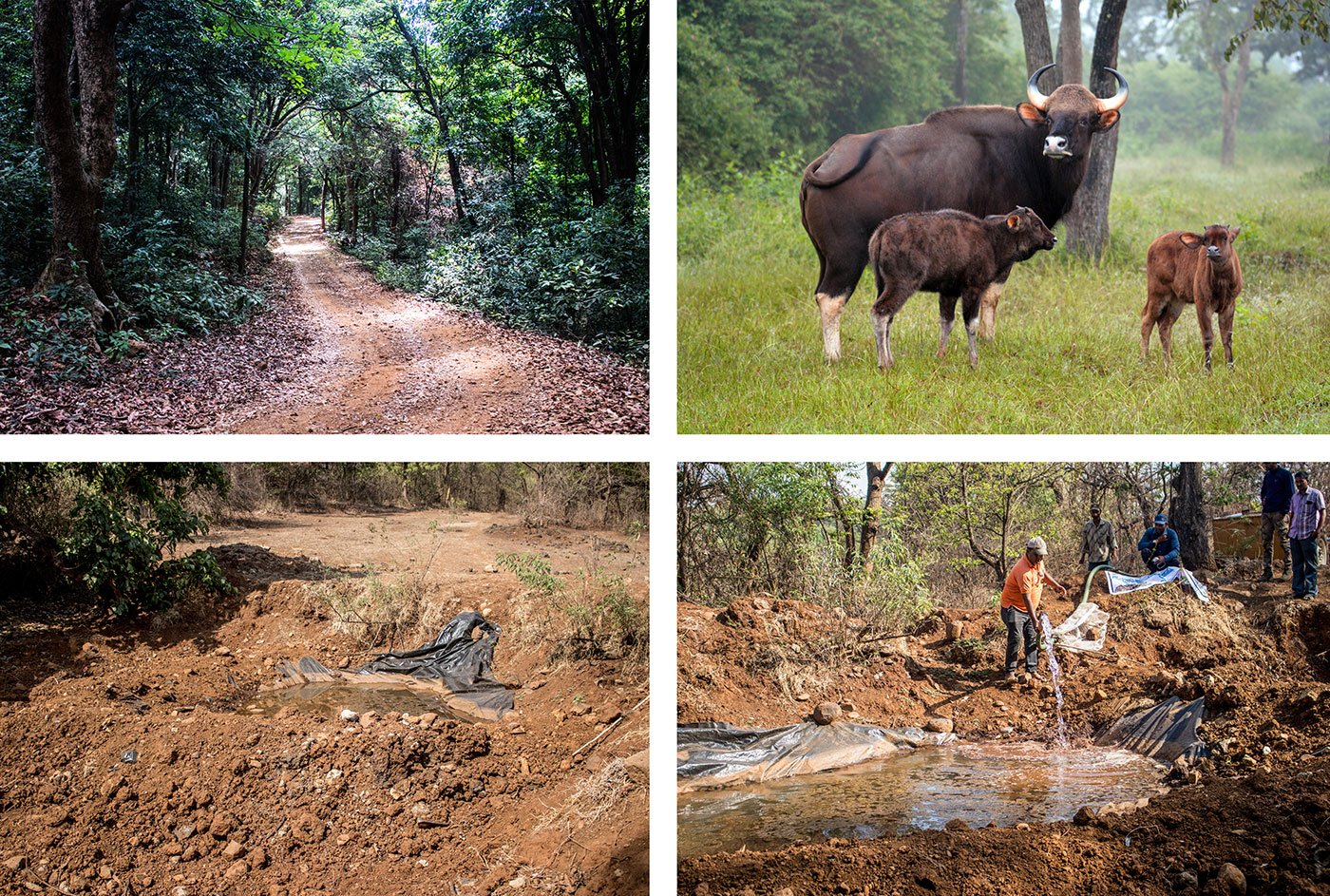 Top row left: Inside Dajipur forest. Right: A gaur buffalo with her calves. (Photo: Rohan Bhate). Bottom row left: An artificial pond created near a natural one for the bison. Right: Samrat Kerkar pouring water into a pond from a 3,000-litre tanker

In April and May 2017, some ponds in the Radhanagari and Dajipur forests were for the first time recharged artificially – with water from tankers. Around 20,000 litres of water in all were supplied this way at three spots in both forests by Kerkar’s Bison Nature Club. In 2018, that rose to 24,000 litres. (There are many other forest ponds maintained by the forest department itself).

However, “this year, the forest department permitted us to only supply water at one pond in the Radhanagari range for reasons unknown,” says Kerkar.  This year, the NGO supplied 54,000 litres. In any case, “we stop supplying after the first two monsoon showers in June,” says Kerkar.

Deforestation, mining, major changes in cropping patterns, drought, a general drying up, the degradation of water quality, a sucking up of groundwater – all these processes have had their impact on forest, farm, soil, weather and climate in Radhanagari and the larger region it is located in.

But it’s not just natural climate that is deteriorating.

The incidence of gaur-human conflict is mounting. “The gava ate all the elephant grass I cultivated on 20 guntha [roughly half an acre],” says a miserable Maruti Nikam, 40, who owns six acres in Nikamwadi village of Panhala taluka . “They also wiped out the corn I had on another 30 guntha between January and April this year.

“In the rainy season, there will be a lot of water in the forest, but if they don’t find food, they will return to our fields.”

Cover photo: Rohan Bhate. Special thanks to him for giving us permission to use his images, and to Sanctuary Asia.