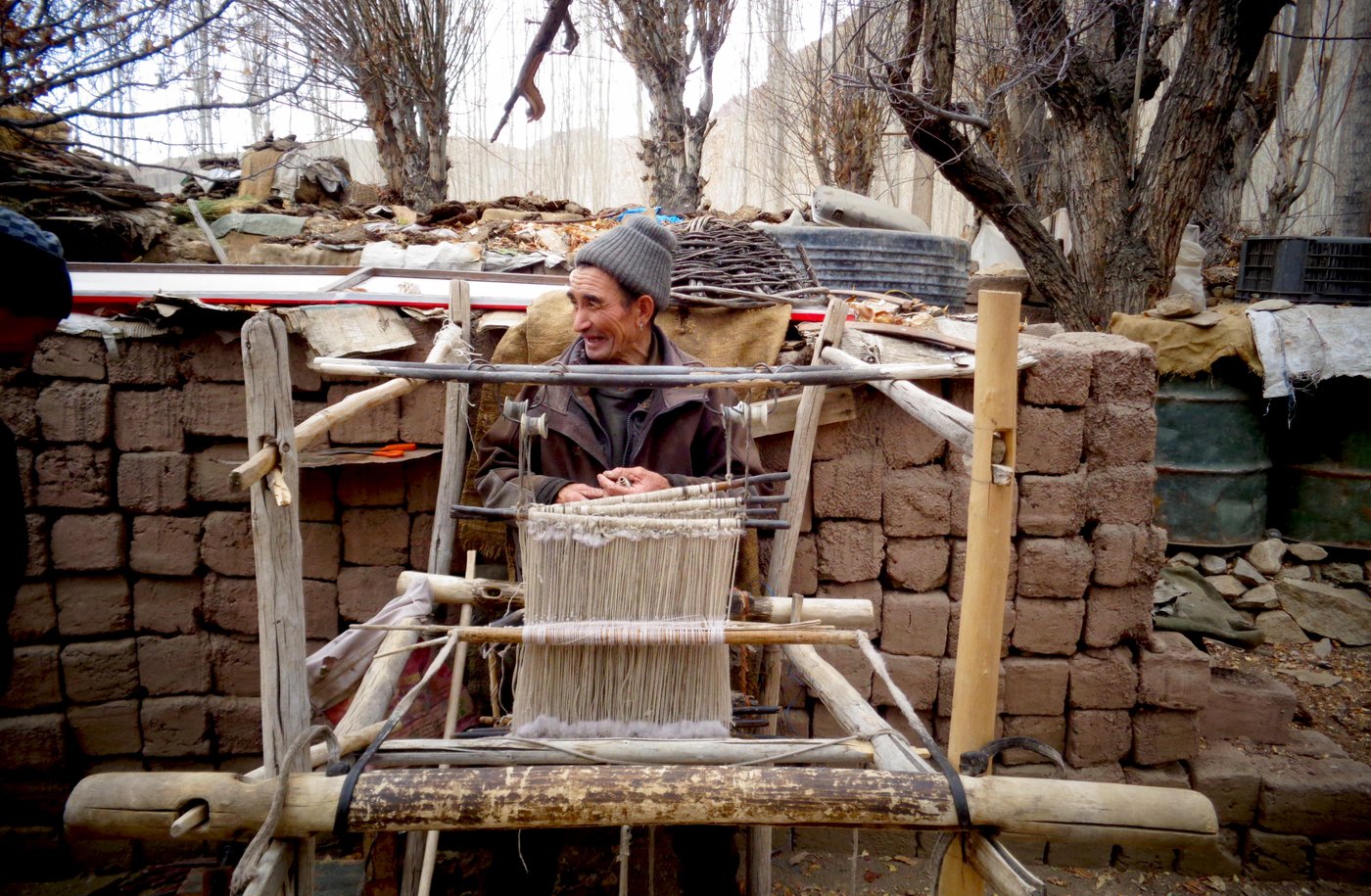 “I bet you met only cows, donkeys and a few dogs on the way up here,” smiled Tsering Angchuk, 62, when I met him in December 2016 in Sneymo village, 35 kilometres from the town of Leh in Ladakh, Jammu and Kashmir.

Most of the houses in this small village, with a population of around 1,100 (Census 2011) are locked for the winter. With temperatures plummeting to minus 13 degrees Celsius, residents prefer to move in with family members living in the warmer climes of Chandigarh, Jammu, Delhi or even Leh. “This leaves only a few people like me, with the cattle for company," says Tsering, whose wife and three children are away, while he lives at a relative's home taking care of their livestock – mainly cows and dzos (a hybrid of cows and yaks).

Watch video: Tsering Angchuk explains how different patterns are woven on his loom

Tsering pours some hot Ladakhi tea ( gur-gur tea) for me, and a small wooden bowl of chaang (local beer made from barley) for himself; a few kittens jump into his lap as soon as he sits down. He enjoys being alone in the winters. This is when he can concentrate on what he really loves – weaving. 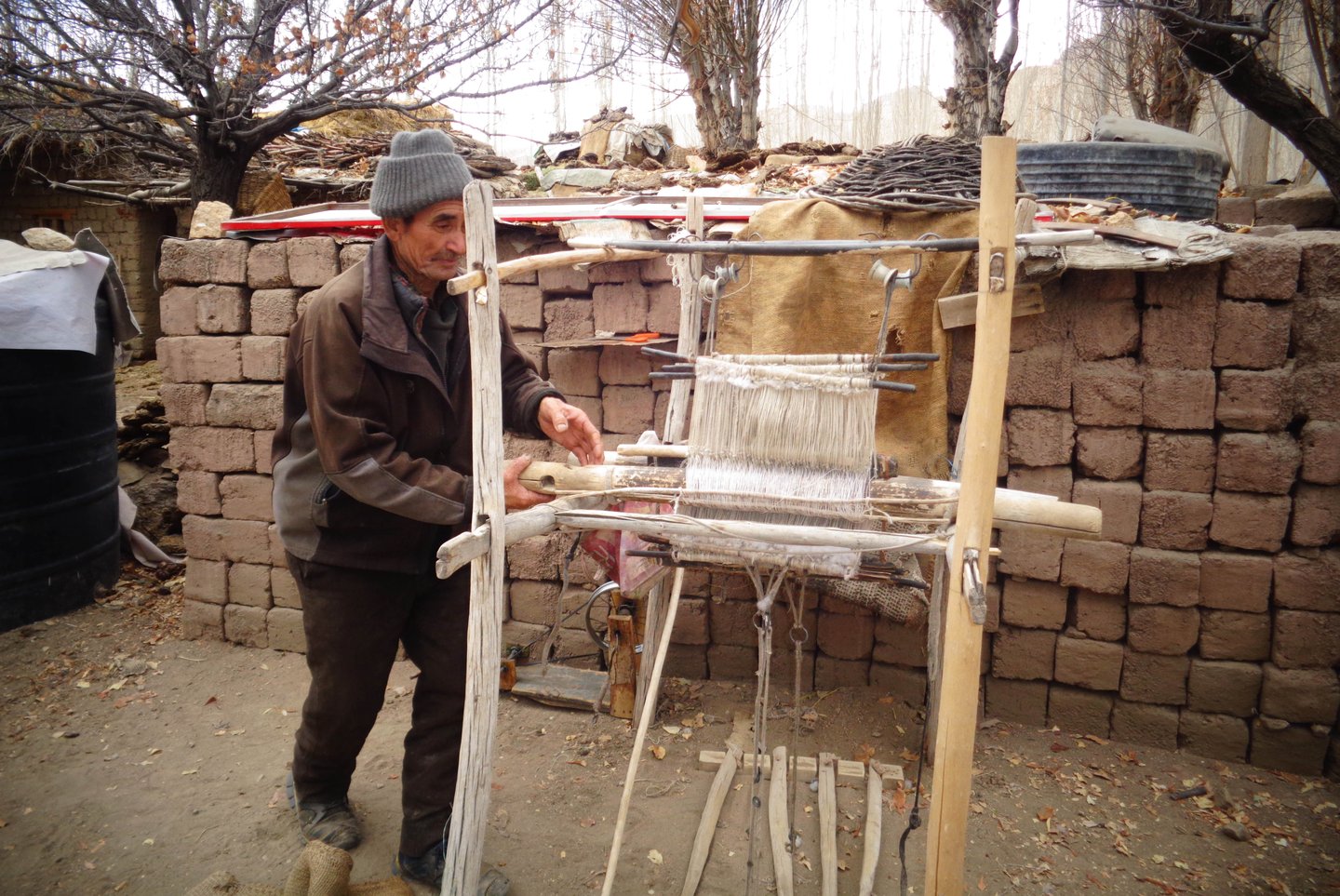 Winter in Ladakh reminds me of snowy childhood holidays in Sneymo, my mother's hometown, family get-togethers and grandma’s bedtime stories around a bukhari (a metallic fire vessel). Walking uphill to Sneymo that sunny day after seven years away, I can see how much has changed in the villages of Ladakh. The once-bustling streets and fields are now empty, the villages are deserted – and not only in the winter – as people move permanently to Leh and other towns. Walking uphill that day, the landscape felt lifeless and barren

Tsering and his wife are farmers, and most of the summer months are spent in their fields, cultivating barley Ladakh's staple crop, and in tending the cattle. 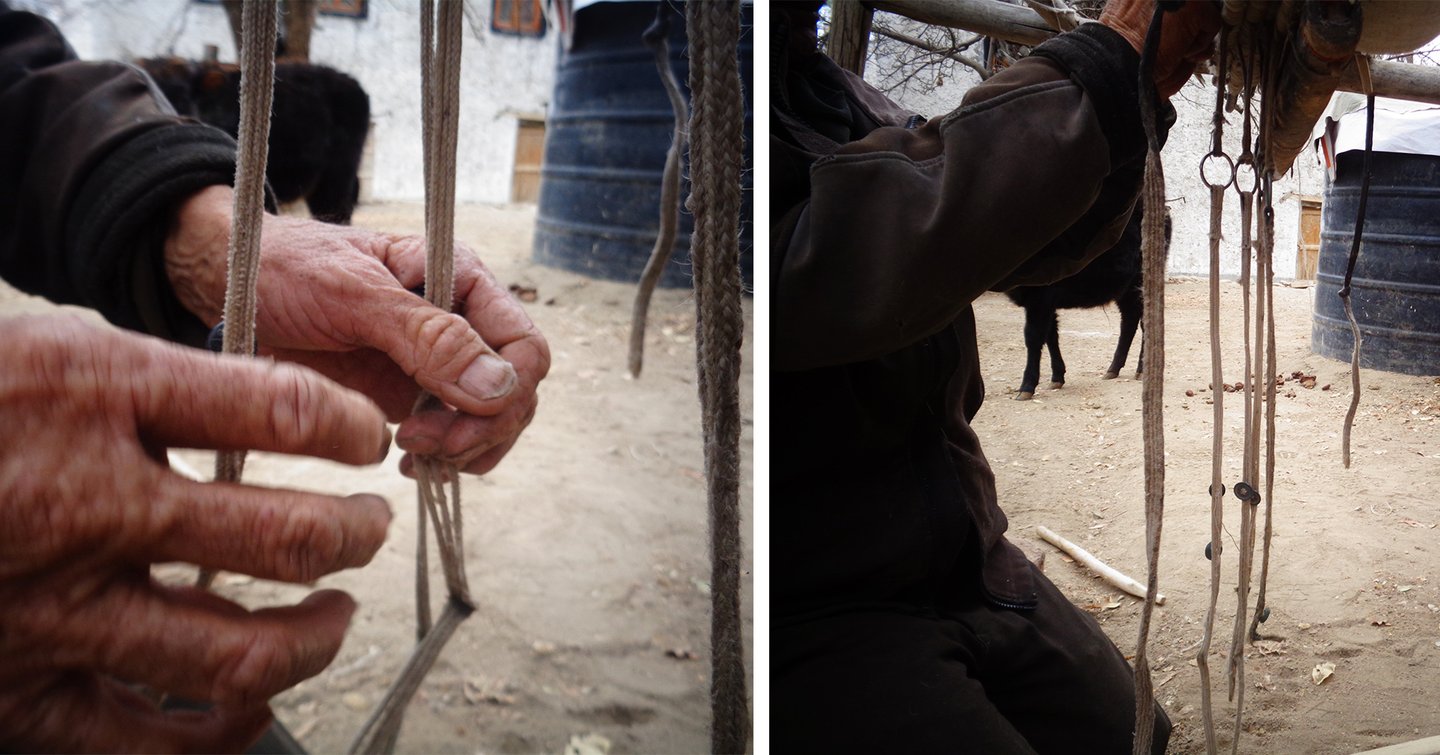 Left: He attaches paddles to the main body of the loom. Right: He displays the repurposed buttons and ropes used for attaching them 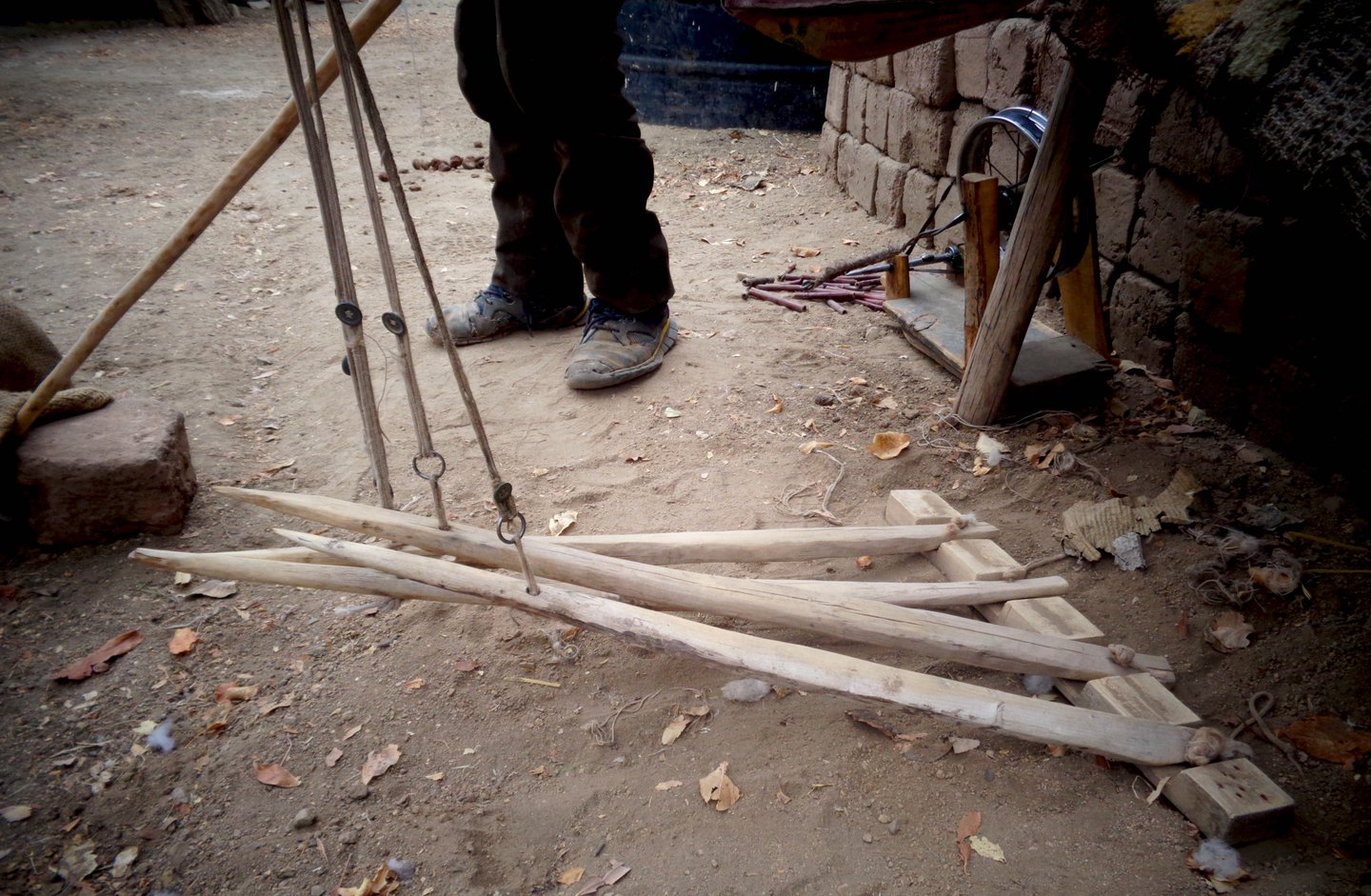 When he is not farming, Tsering weaves – he is a skilled and reputed weaver who is invited to many villages to weave his signature version of a woollen fabric called snamboo . One roll of this woven material is required to stitch the goncha , a traditional garment . Weaving, he explains, is a family occupation. “I remember my father being very strict when he taught me to weave. Tears used to run down my cheeks when I heard kids playing outside in the snow while I tied knots of woollen thread on the loom with aching – sometimes bleeding – fingers. Now I realise the value of this family skill, which fetches a substantial additional income for us.”

Tsering tried a lot to teach his son, who is in his early 30s. His son does weave sometimes and is quite good at it, but  not as passionate about weaving as his father. “You cannot be very strict with kids these days!” Tsreing says. “They prefer to roam aimlessly in the Leh marketplace, picking at their phones. “

Watch video: 'It is always the time when a vertical thread – there are 384 in all – breaks, and you have to figure out where and when it happened,' says T sering Angchuk

Tsering’s father used to weave a 40- thu roll for Rs. 20 or Rs. 30; now Tersing charges Rs. 800-1,000 to make the 40- thu length. “I tell my son it’s going to earn a fortune for his kids in the years to come. 'Cultural preservation' is becoming quite fashionable these days. Education and schooling is no doubt important in the growth of an individual, but skills are what you need to earn a good living, to have your own identity.”

He shows me his traditional loom, all its components drawn from the local environment. Built on demand by local Ladakhi carpenters, the loom is made of wood, buttons of old army jackets, with the cylindrical thread base fashioned into pulleys. 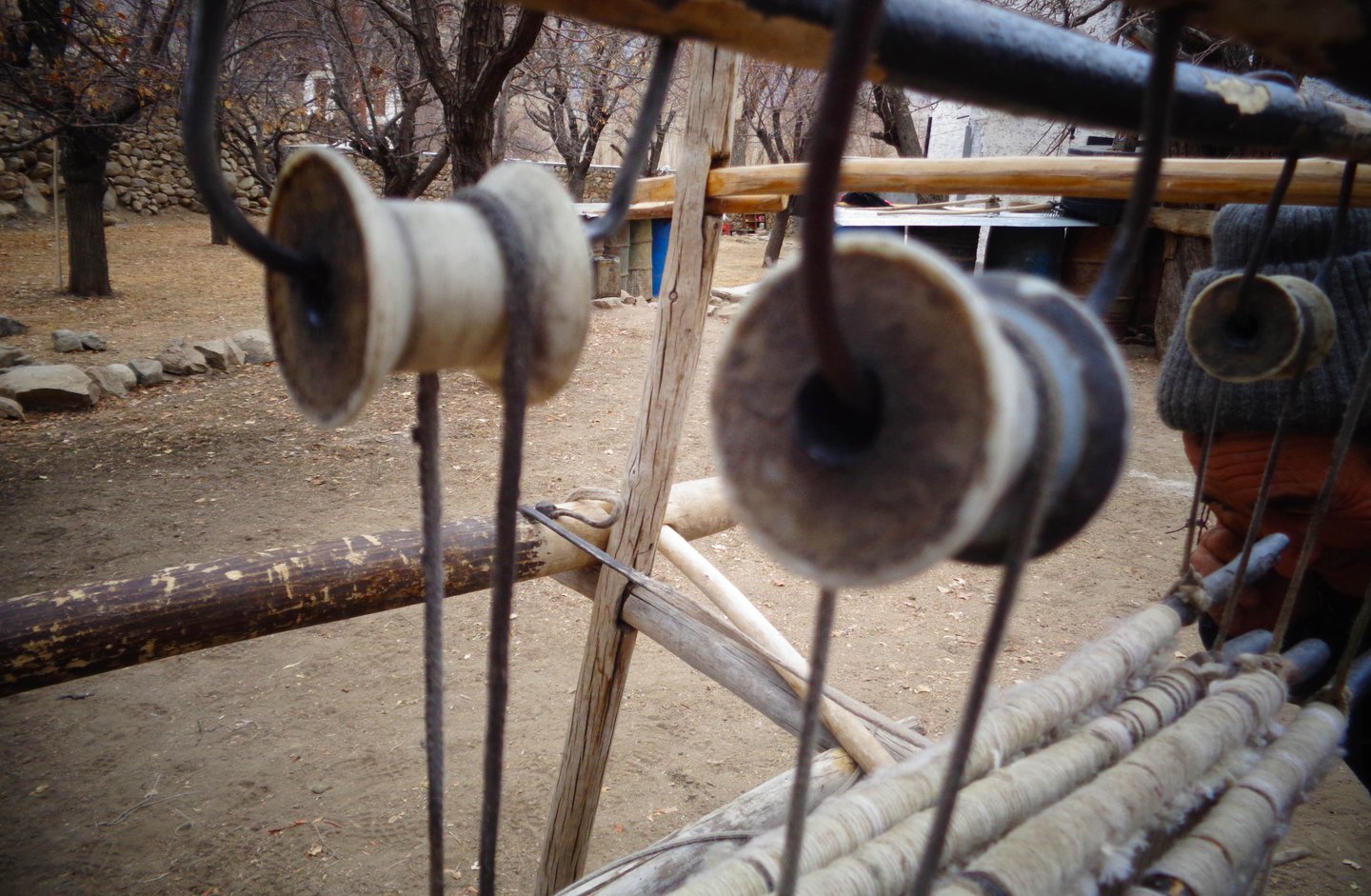 The loom is made almost entirely of refashioned elements with wooden bobbins reused as a pulleys.

“Locally available wood is used for the frame ( thisha ) of the loom ( thagsha ), and for the boat-shaped holder ( rumbu ) for the spindle that weaves the horizontal threads into fabric," Tsering explains. "Even the small bamboo-like pipes ( poori ) are a kind of grass found in plenty along the sides of freshwater streams."

The weaves are of two kinds. "The simple one is the fabric with a right and a wrong surface, and the more complicated one, gyalog , is where both sides can be worn. The two styles are differentiated by the way the foot paddles are used.”

Tsering shows the fabric he's making and points to that portion of it which will be the outer side of the final, stitched garment

The total length of the material woven is 40 thu (one thu is the distance between the elbow and the tip of the middle finger extended, roughly a foot), and the breadth (measured in sor, also a hand measure), is around one foot, shrinking a bit in width after dyeing.

“I weave a 40- thu roll a day if I’m not distracted by other chores, but it could also take three to four days, depending on my working hours and deadlines,” explains Tsering. In the winters, he earns more from weaving than in the summers, when farming takes most of his time and energy. His income varies during the course of the year, ranging from Rs. 3,000 to Rs.10,000 a month. 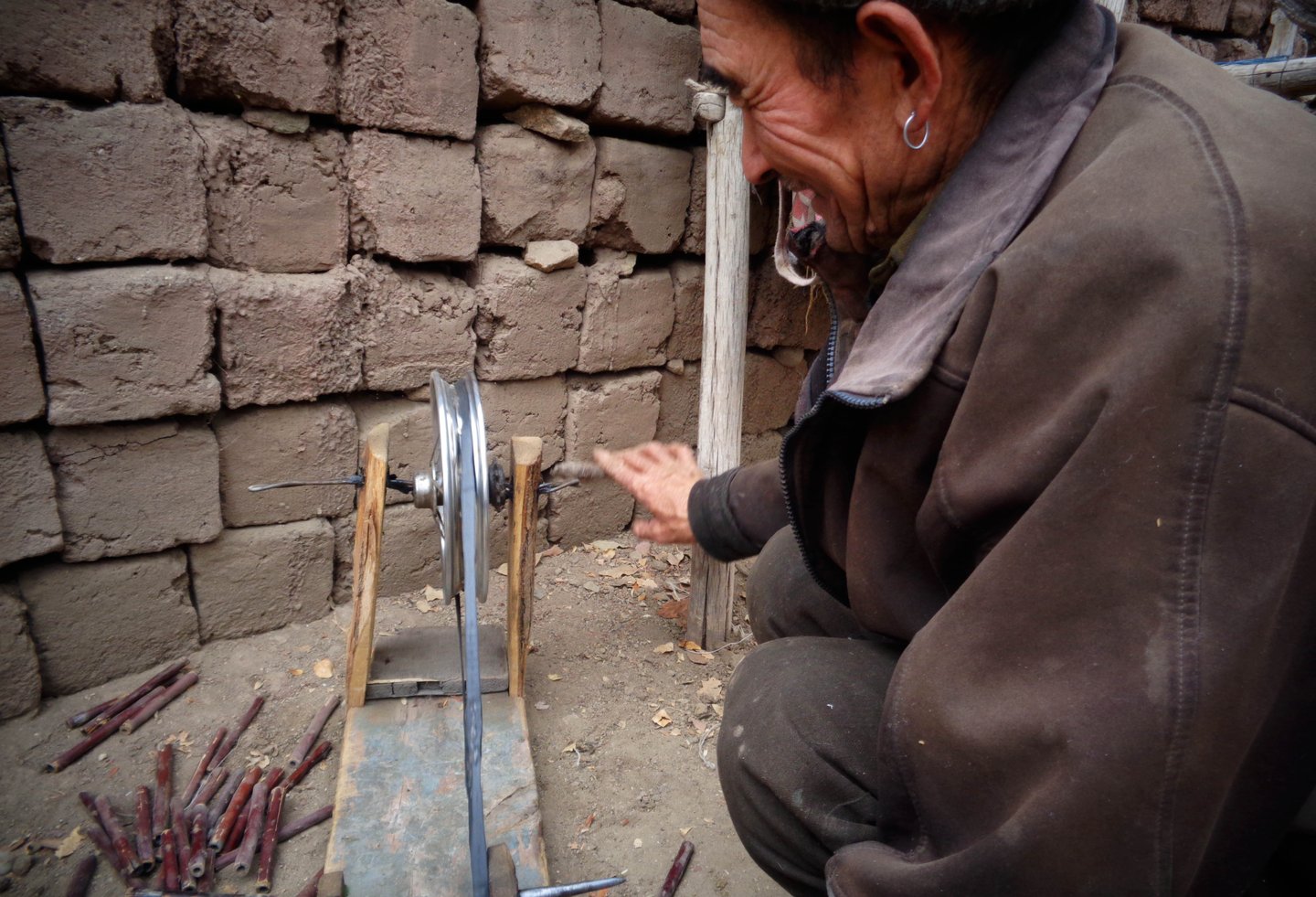 The charkha he made, using the wheel of an old, discarded children's bicycle

Tsering is sitting on a jute bag placed on a dried willow branch, with mud bricks to support his back. “What do I find most challenging while working on my loom? It is always the time when a vertical thread – there are 384 in all – breaks, and you have to figure out where and when it happened, and how to fix it. Mastering the art of tying knots is very important in weaving a perfect fabric. 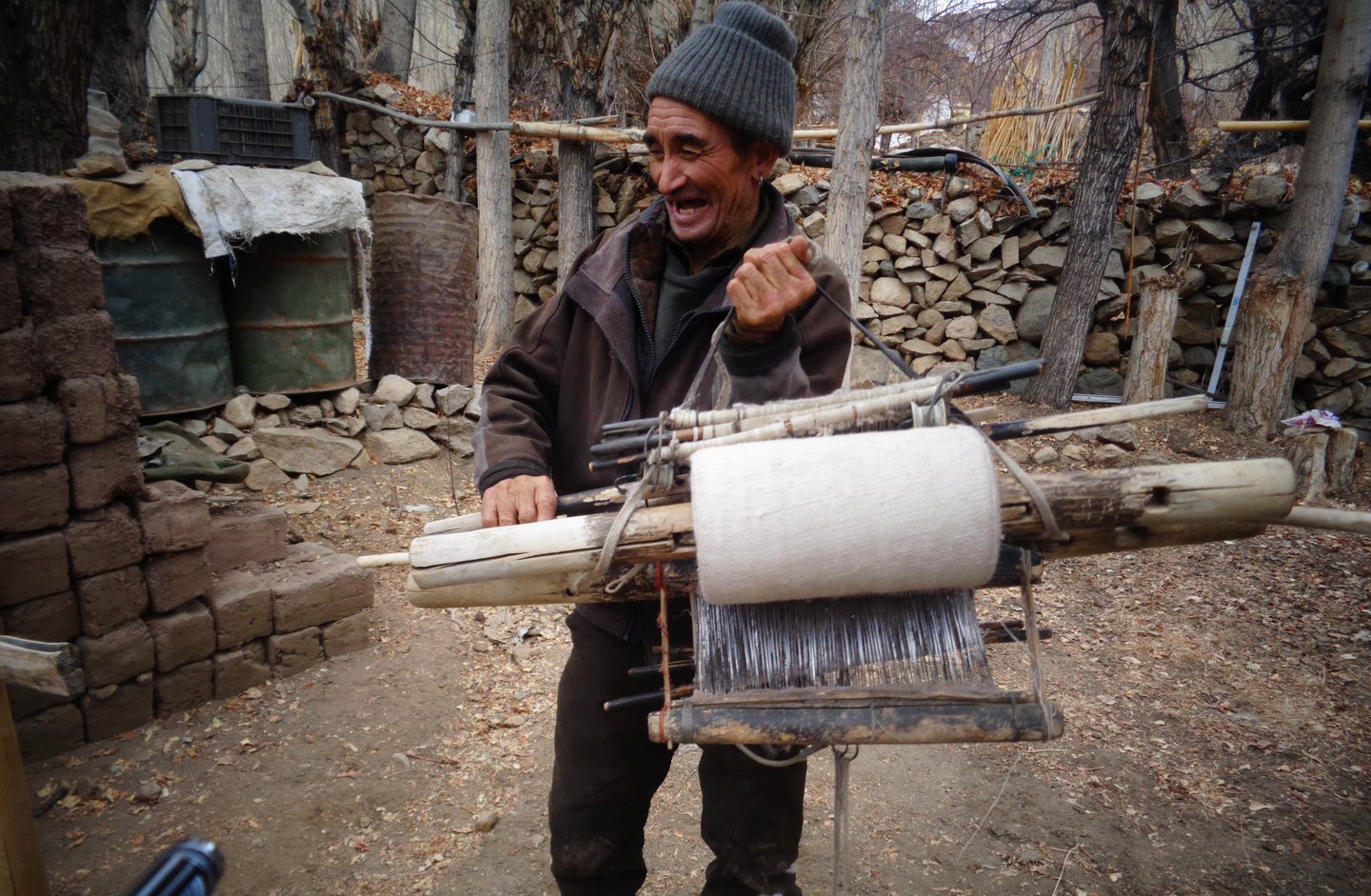 Footloose weaver: He enjoys travelling with his portable loom

Tsering usually carries his loom on his back wherever he goes. “My loom gives meaning to my travels. I visit friends, relatives and strangers to socialise and earn simultaneously. I’ve seen people working on modern and more complex looms, weaving beautiful designs, but I’m happiest with my portable loom, as I get bored sitting in one place for too long. Weaving is my passion and this loom is my love. Weaving gives my life meaning. It is both my heritage from my forefathers and my legacy for the coming generations.”

This simple man with a profound philosophy epitomises life in these mountains, I think as I leave, a way of life that is fast disappearing.