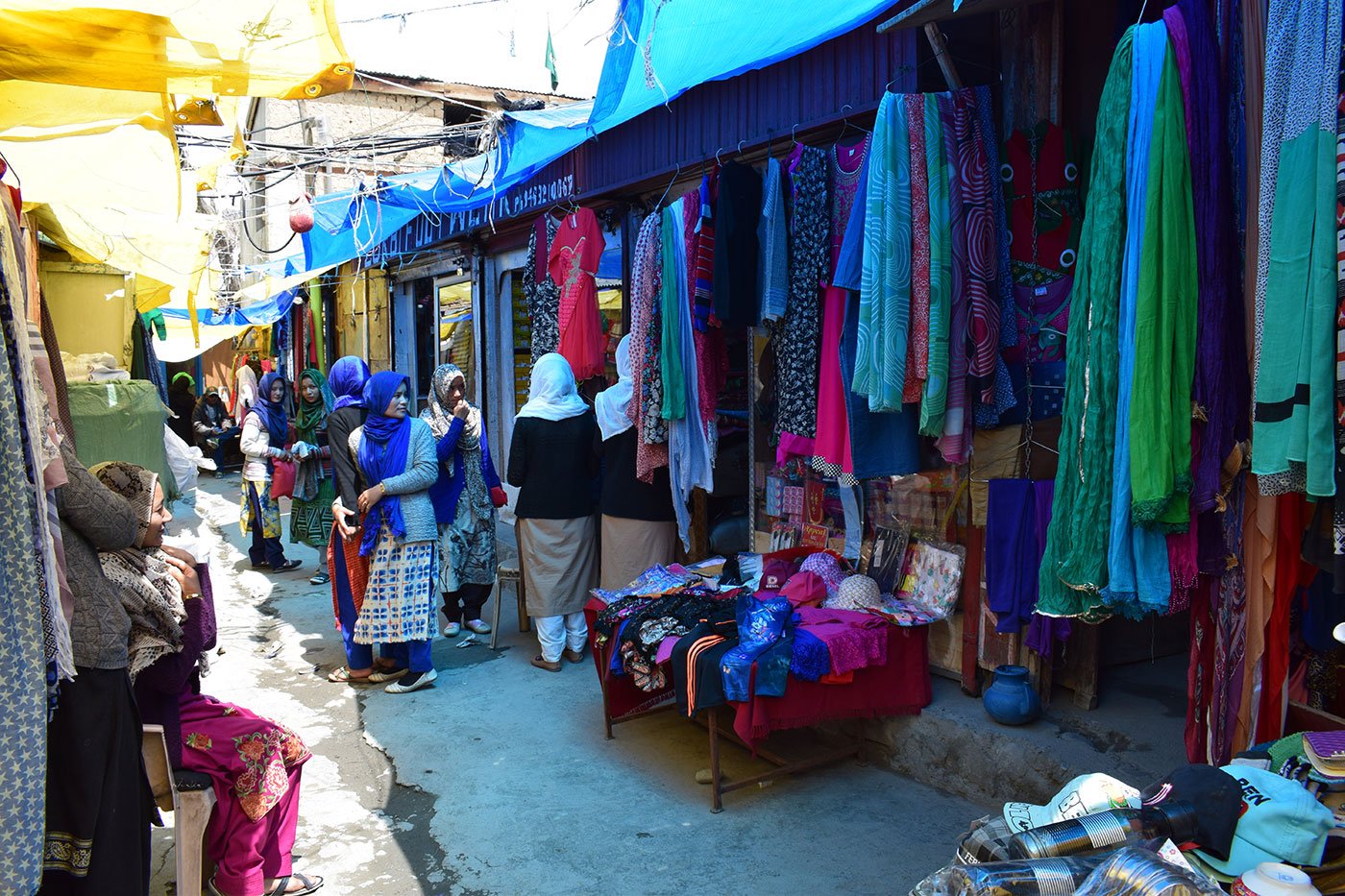 The Commander Heights of Kargil's economy

This extraordinary market in Kargil, Ladakh – where all but three shops are run  by women – has inspirational tales embedded in its origins and success

When walking down the main market road in Kargil, a narrow winding lane branches off, with small shops on either side. Colourful scarves and dupattas flutter on display outside each shop here – and inside is a varied collection of salwar kameez sets, sweaters, accessories, footwear, kids' garments and other items.

This is Commander Market, so called, locals say, because the land the shops stand on is owned by a ‘commander’. The shopkeepers here are all Shia women.

Kargil is located close to the border in Ladakh, and flanked by the Himalayas. It was an important southern node in the Central Asian silk route trade until 1947, when borders were drawn between India and Pakistan. The town’s population of around 16,000 (Census 2011) mainly comprises Muslims, along with some Buddhists and a few Sikh families. They have, over the generations, seen three wars, the last of them in 1999.

The first shop run by a woman came up at Commander Market – it got that name later – nearly three decades ago. The shop owner faced severe opposition and vilification, the present shop owners says, which is why they don’t want her to be named. Over time though, inspired by her determination and success, 2-3 more women rented spaces at the same location. Now, there are around 30 shops at this market, all but three of them run by women.

From scarcely any women in public places in Kargil until even a decade ago, Commander Market is now an uncelebrated landmark. The younger shopkeepers here attribute the change to an increase in female literacy (from around 42 per cent in 2001 to 56 per cent in 2011). Plus, the older shopkeepers say, their economic independence drew more women to the market – some out of a compulsion to earn, some inspired by their predecessors. Kargil, they say, has now accepted this change.

When I visited Commander Market for this photo essay, a few women avoided the camera, some were concerned about their photographs being published, and some did not want their full names to be used. But most of them were happy and proud to share their stories. 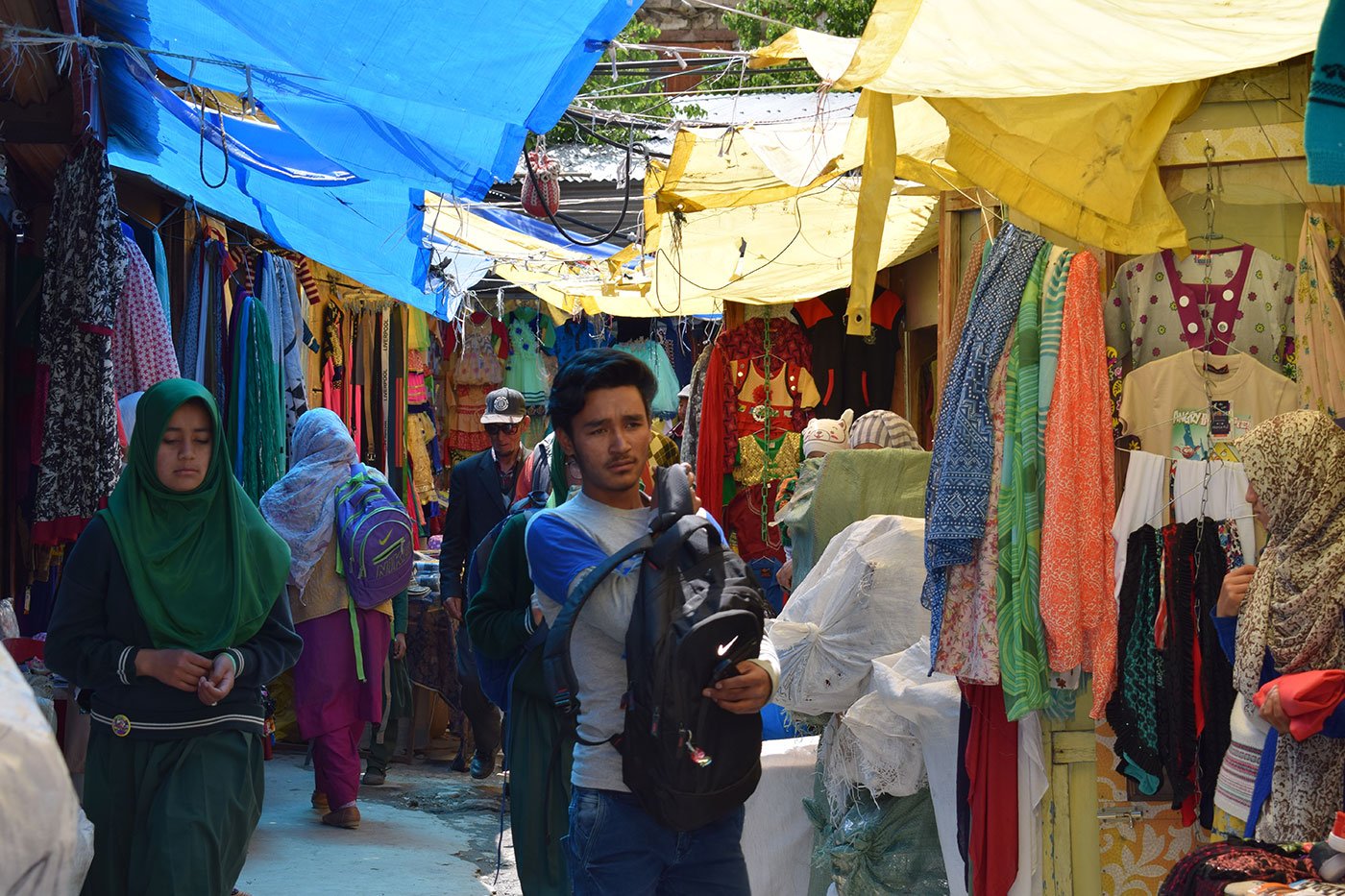 A busy Saturday afternoon at Commander Market during the month of Ramadan. 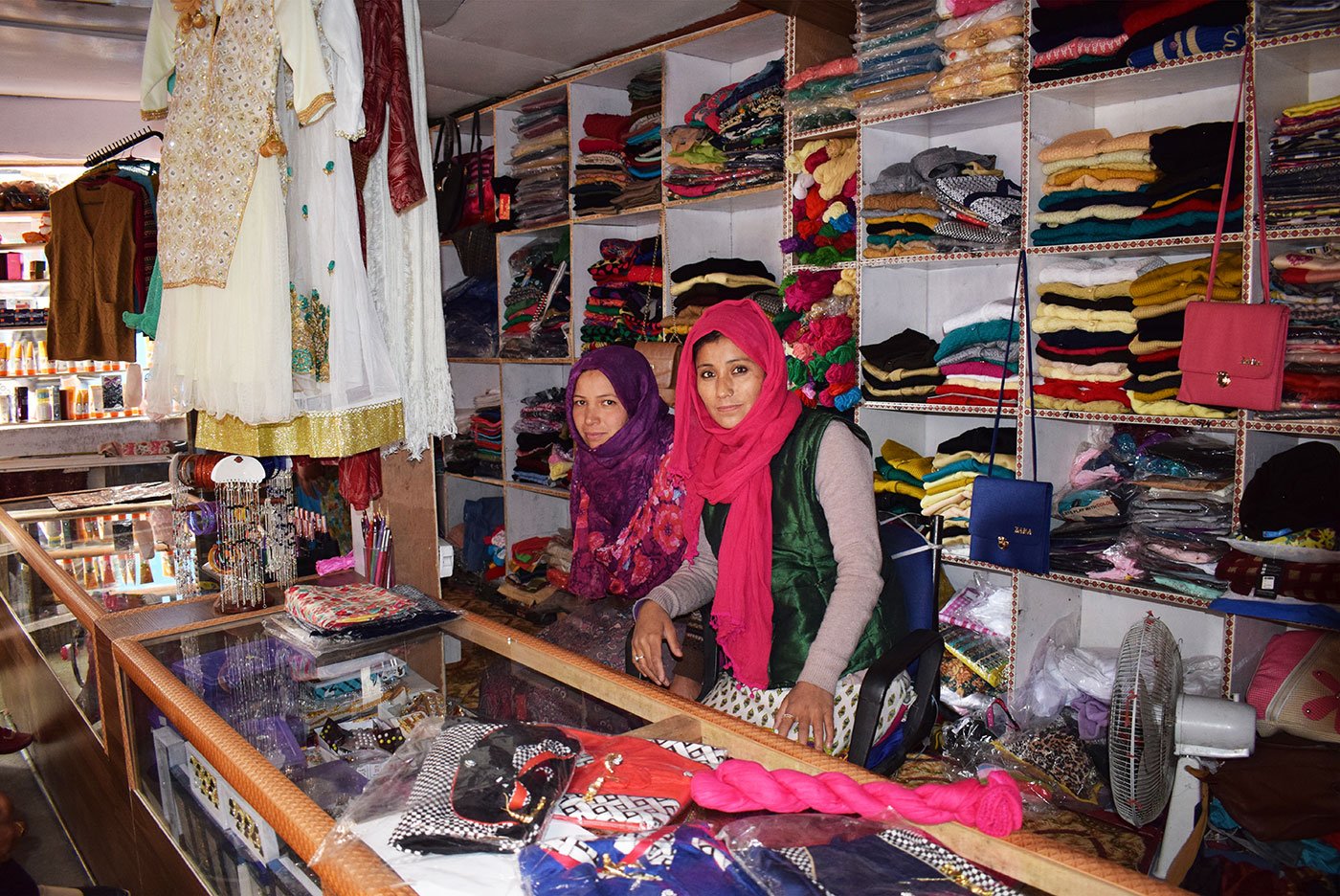 Abida Khanam (right), 28, says “I’m doing a BA through distance education by choice because I want to be financially independent as well. This shop is my aunt’s.  Shahida and I assist her. I get paid Rs. 7-8,000 a month by my aunt. We enjoy working together.” 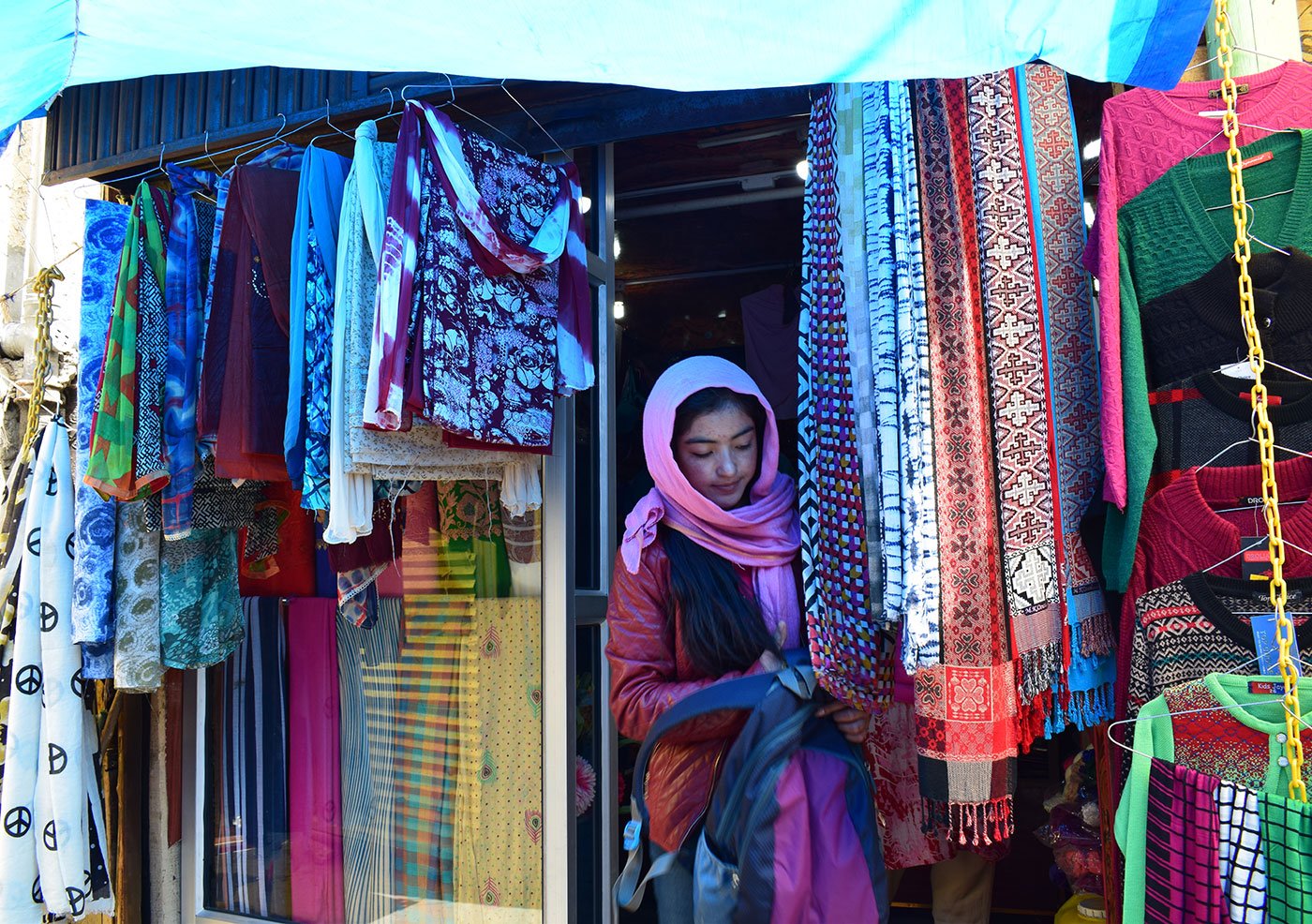 “We travel to Jammu and Srinagar, Ludhiana and Delhi ,to buy products to sell,” Abida Khanam says. The women, she says, prefer to do the shopping during the off-season winters, a time when they also get a break from the harsh cold of Kargil. The items they order are delivered to them when the Srinagar-Leh highway opens in May. Until the new lot arrives, they have enough in stock from the previous year. 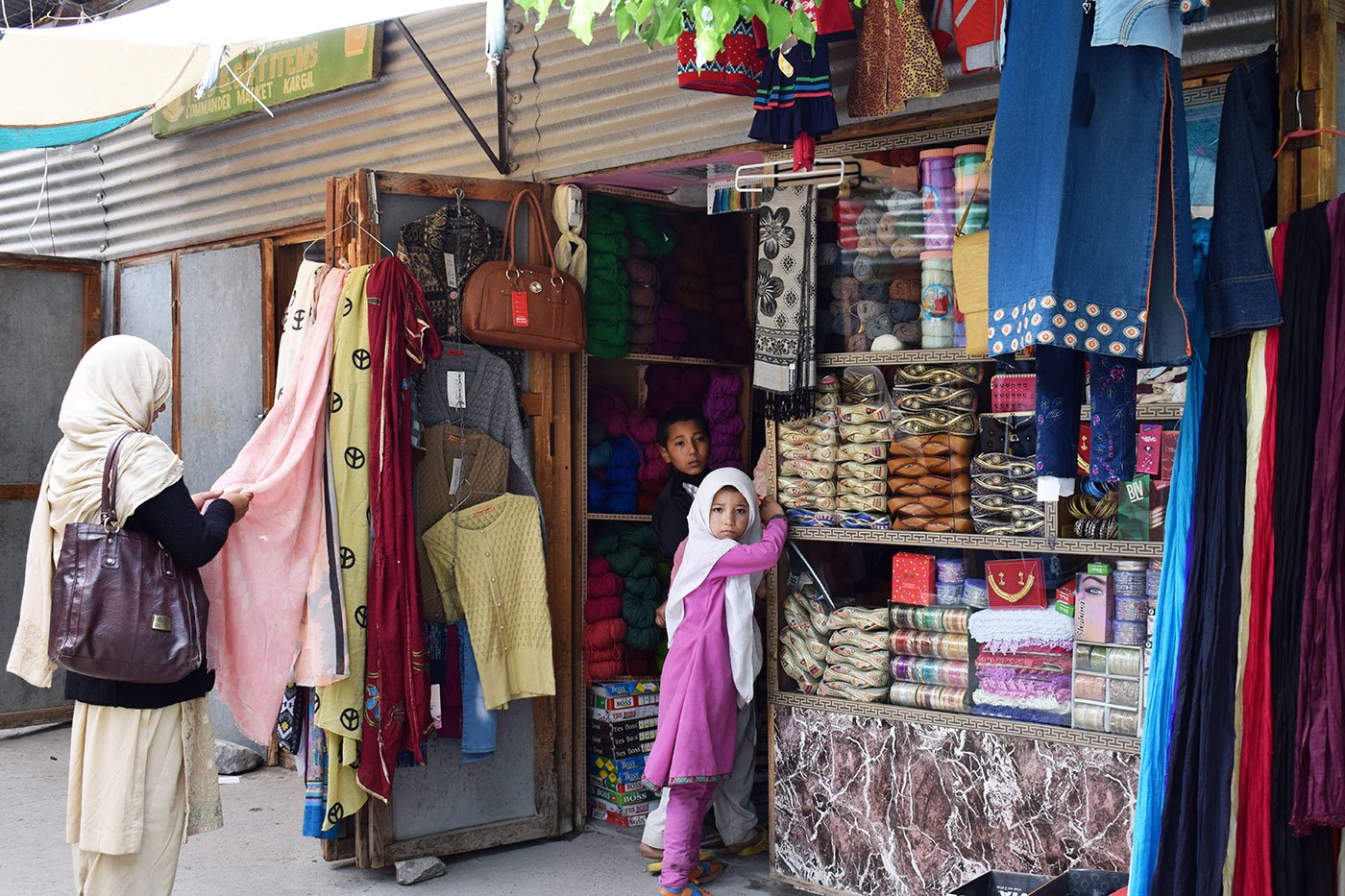 This shop is now handled by Mansoor. His mother set it up almost 20 years ago. “I feel proud to be one of the few men in this market,” he says, “and happy to be helping my aging parents earn a living for the family.” 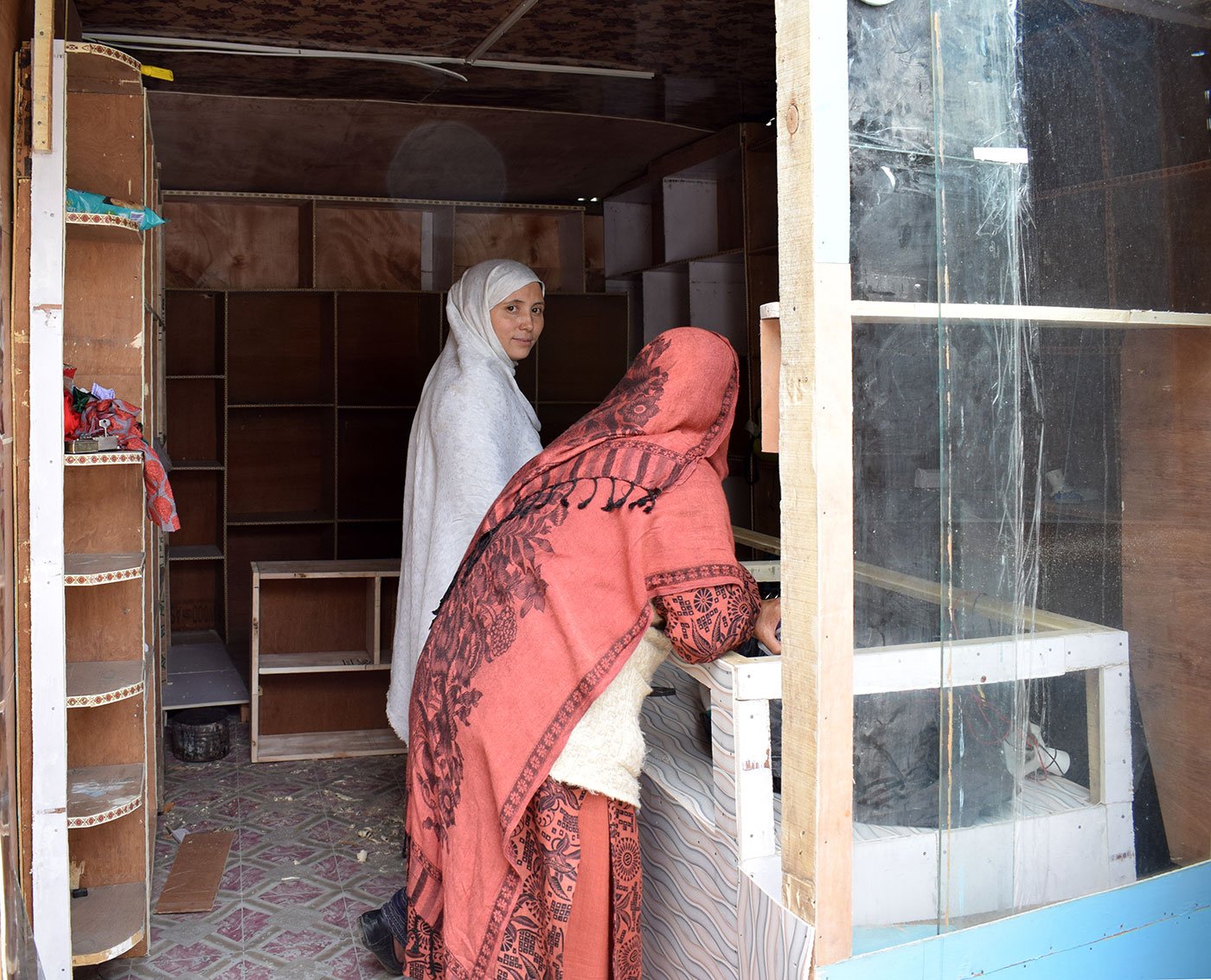 Sarah (left), 32,  is excited about her new venture as a businesswoman, and plans to run the shop with the help of her younger sister. “It is not at all true that women are discouraged or degraded in Islam,” she says “My family supports me and strong female roles models in my faith inspired me to earn for myself  and my family.” 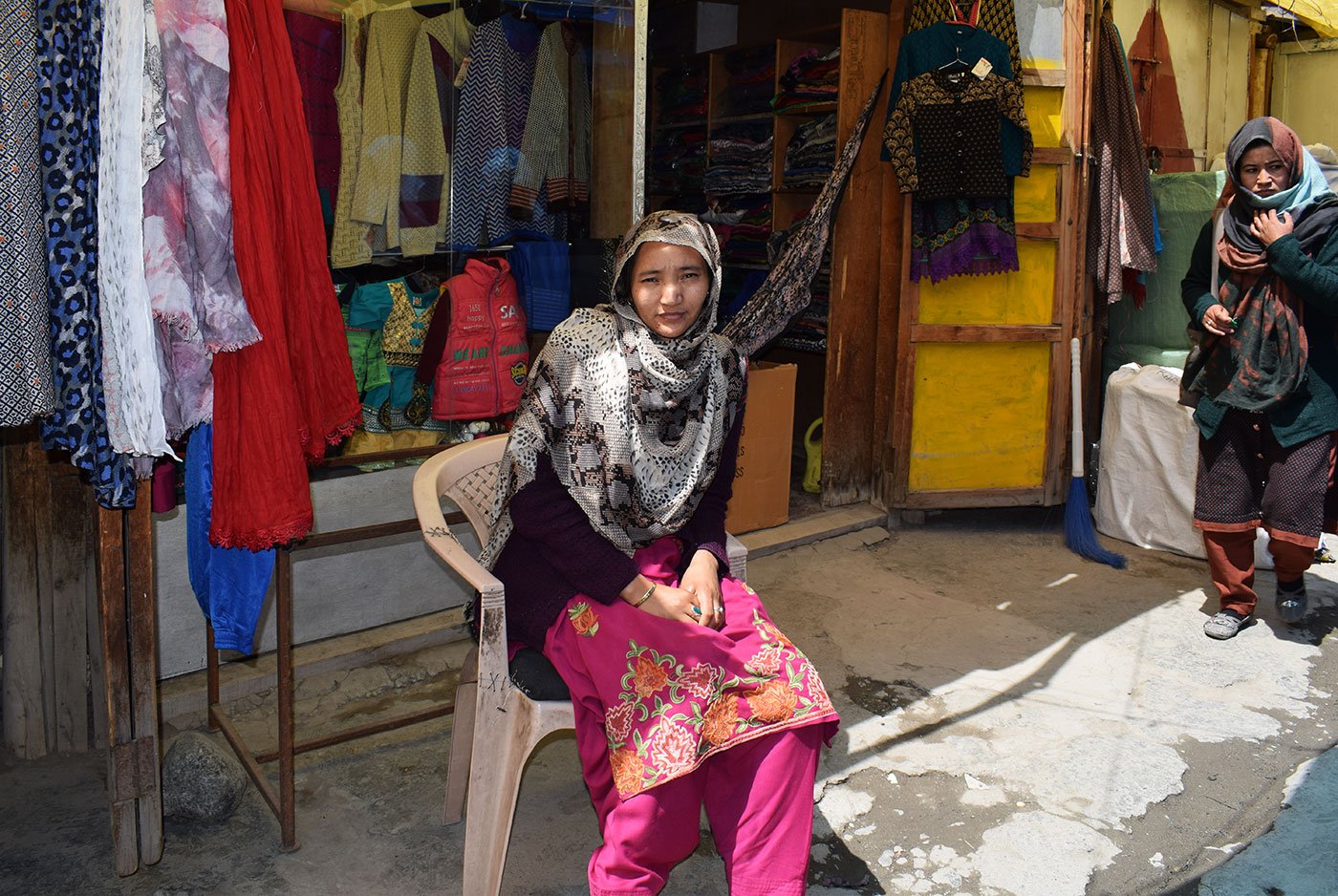 Bano, shying away from the camera, says, “I’m feeling tired and am waiting for the time of iftaar to break my fast.” 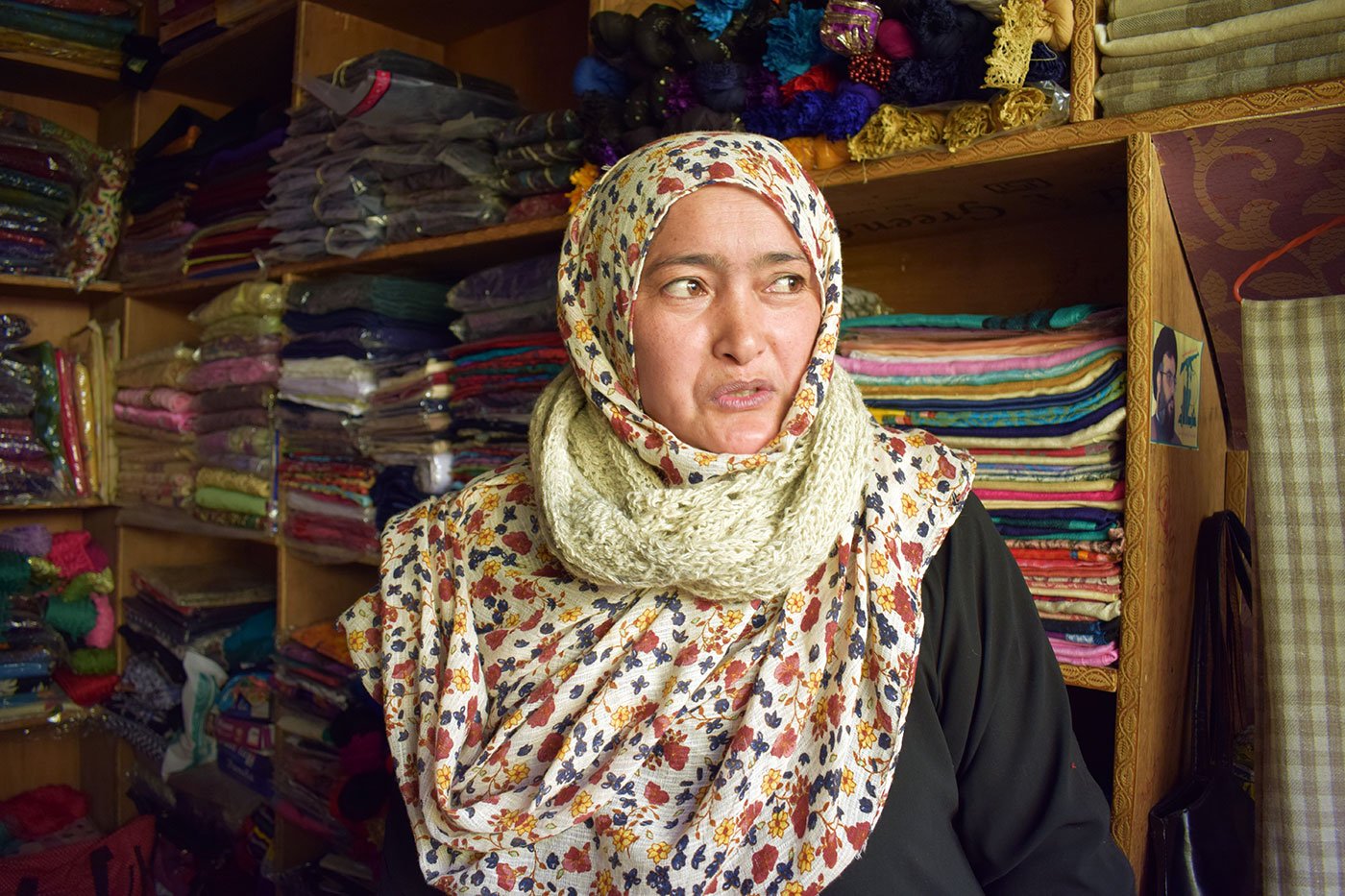 "This [demonstrating the scarf by wrapping it around her neck] is a woollen ‘infinity loop’ and it’s very trendy. It’s popular among foreign tourists who happen to be in Kargil,” says Haji Akhtar, 38. “I’ve involved many women in a few villages in self-help groups so that I can be of some help to them by selling their handmade products like this one at my shop and at some hotels in Kargil. Business is very good, especially during the summers, fetching me Rs. 40,000 a month and sometimes even more.” 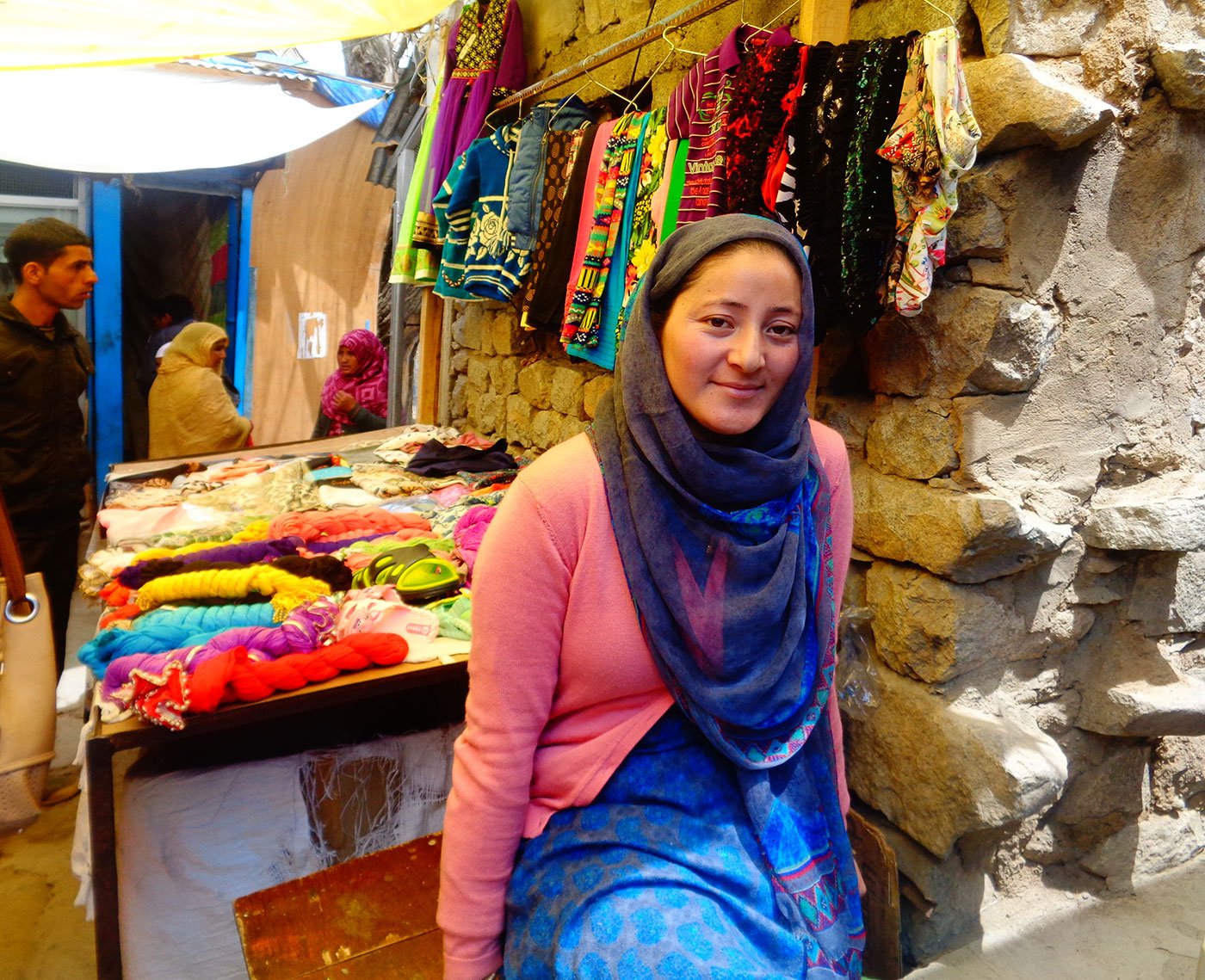 Kaneez Fatima, 25, helps her mother, one of the first women to set up a shop in this market over two decades ago. 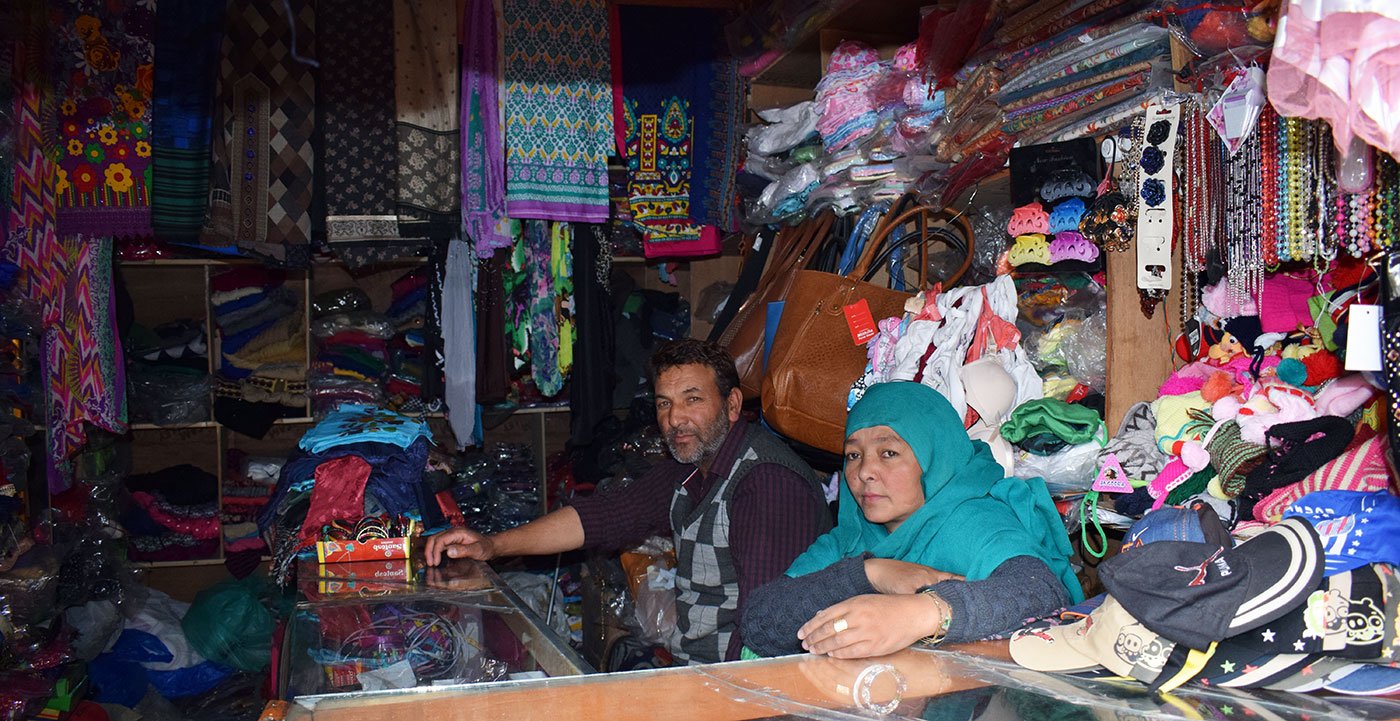 Fatima has been running this shop for almost six years. Her husband Mohammad Isa, sitting by her side, supported her in starting this small business. “He is still standing strong by my side, proud of his wife,” Fatima says “He has been the greatest support and inspiration for me.” 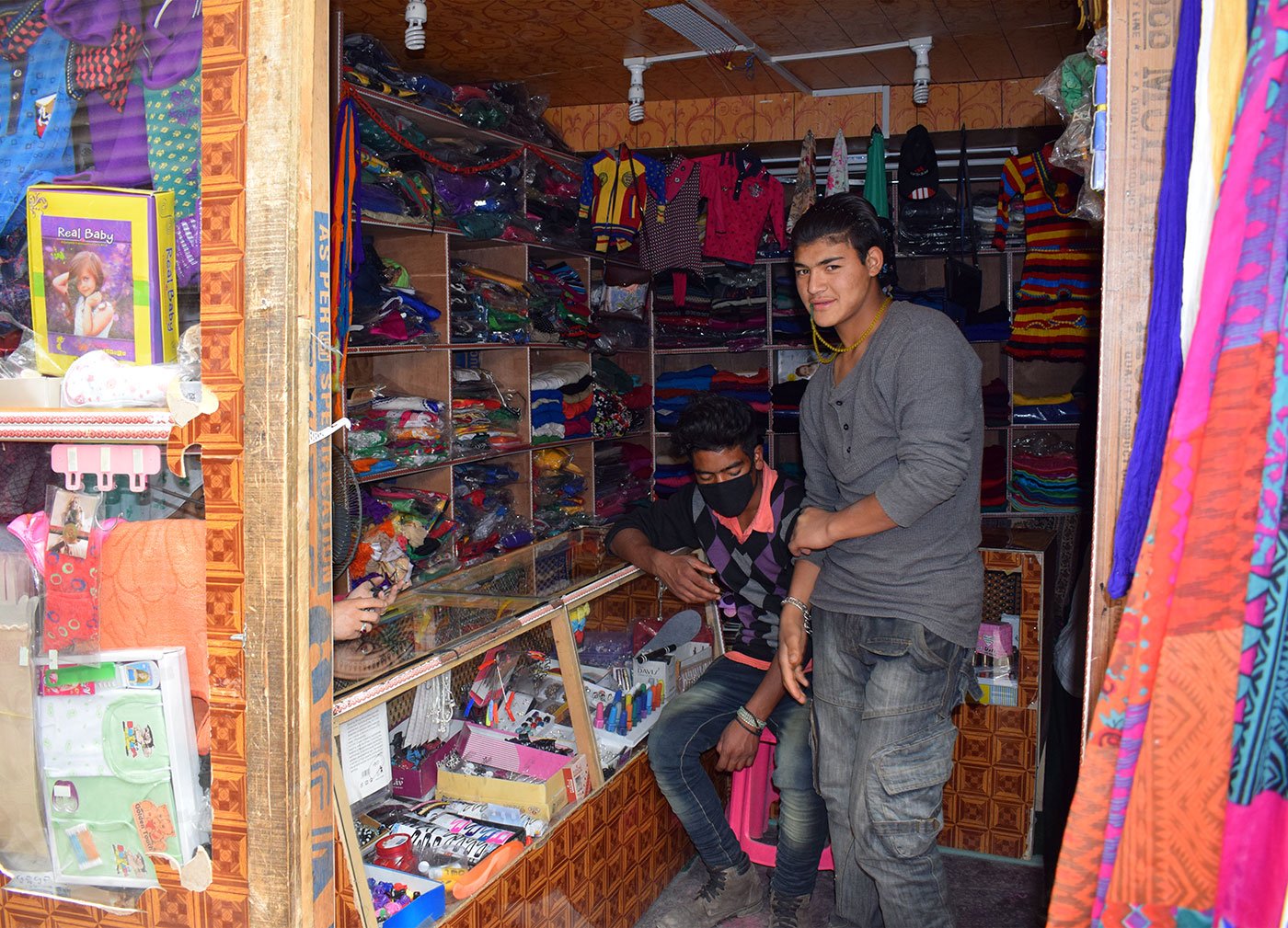 “Achey (sister), why don't you take our picture as well?” ask some young boys who are visiting a shop.