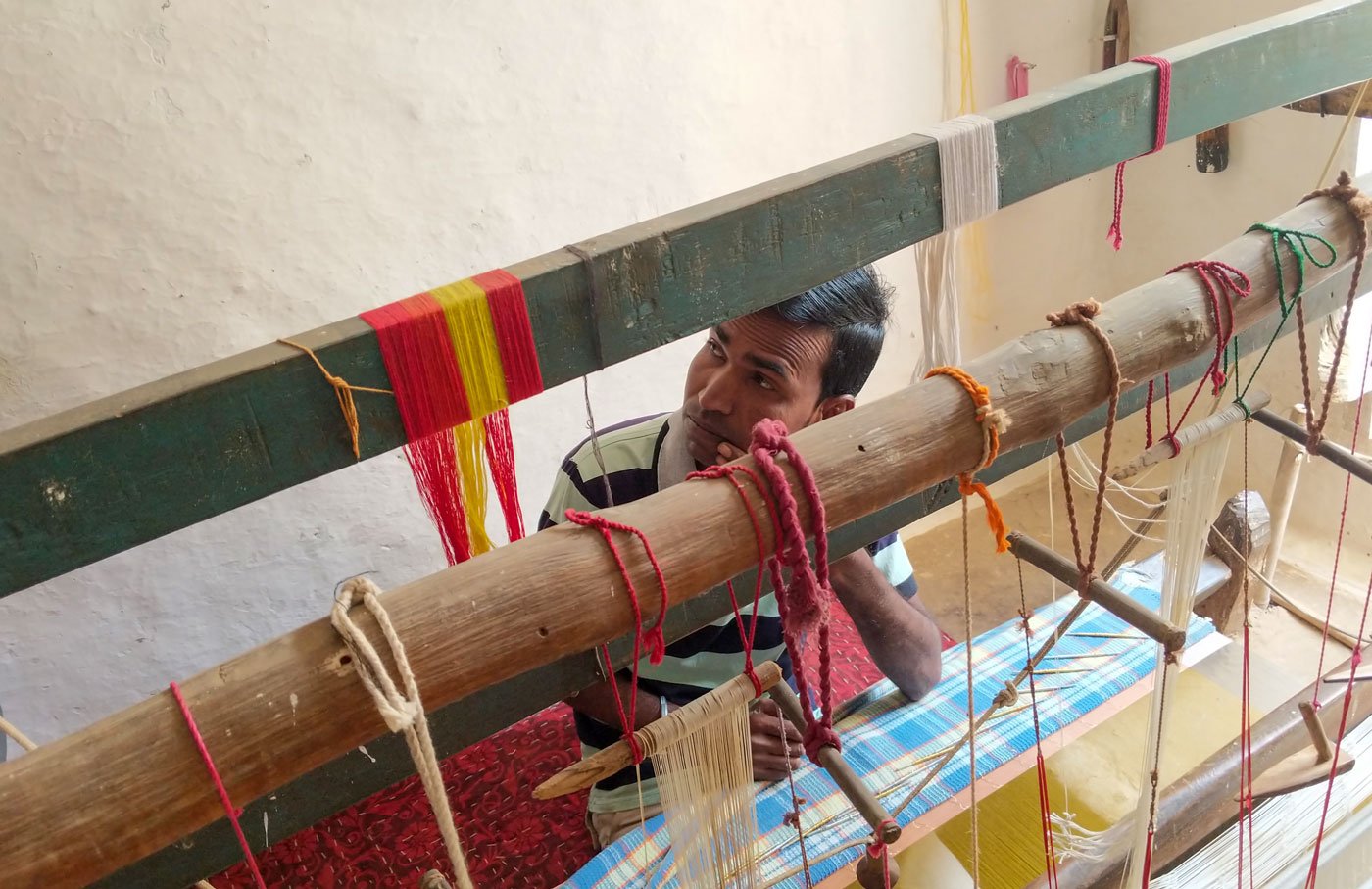 “I have run out of thread. I am running out of cash. But I can’t give the [ready] sarees to the seth because of the lockdown,” says Suresh Koli, a weaver of Chanderi fabrics in Burhwar village.

Barely a week into the Covid-19 lockdown, the last spools of yarn that 31-year-old Suresh was left with had been woven. Three completed sarees were waiting be handed over to the seth , Anandi Lal, a trader of Chanderi textiles from Pranpur village.

The weaver’s village is in Lalitpur district of Uttar Pradesh, near the Rajghat dam on Betwa river. Across the river, in Madhya Pradesh’s Ashoknagar district, is Chanderi town – the centre of handloom textiles by the same name. The seth ’s village, Pranpur, is close to this town.

Police barricades have been guarding the UP-MP border between Burhwar and Chanderi, 32 kilometres apart by road, isolating Suresh from Anandi Lal in the lockdown. “I don’t understand what is happening. Those who were returning home from Delhi were taken away by the police,” says Suresh. “How can our village ever get the bimari [disease]? But the government has locked down our district and our lives have turned upside down.”

Suresh had asked Anandi Lal for Rs. 5,000 as payment for the three completed sarees . “He arranged to send only Rs. 500, saying there will be no full payments until the markets open up,” he says.

Before the lockdown, the seth would give Suresh the raw materials – cotton and silk yarns, and zari threads – and commission him to weave sarees , dupattas , stoles, soft furnishings or just fabric. He would also give him the designs. Rates were fixed per order and payment was made at the time of delivery, always in cash. 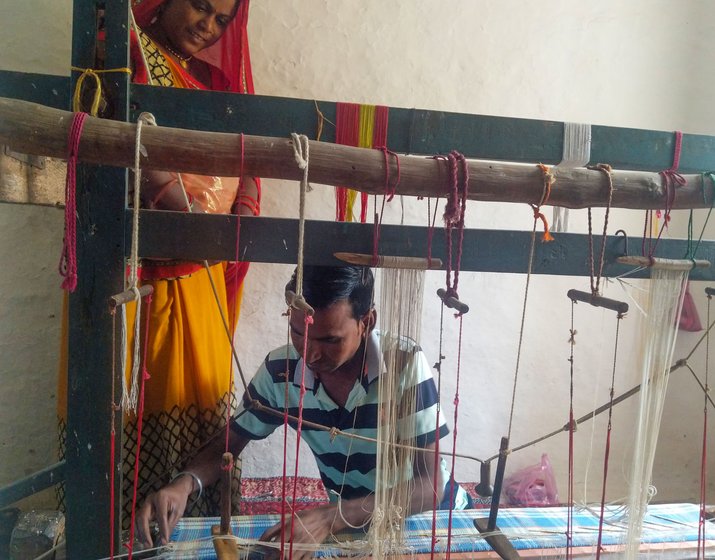 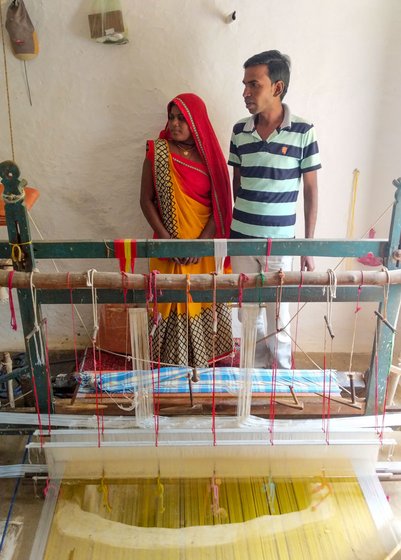 Suresh and Shyambai Koli had steady work before the lockdown. 'I enjoy weaving. Without this, I don’t know what to do,' says Suresh

The lockdown has disturbed this routine arrangement between the traders and the weavers. By the first week of April, Suresh needed more yarns and zari to continue working, and he needed money to sustain his family. He began making desperate phone calls to Anandi Lal every day. Eventually, the seth agreed to meet Suresh at the barricades on April 27. He gave him spools of yarn and Rs. 4,000 as an advance to weave four sarees by the end of May. The rest of the payment owed to the weaver would be given later, he said.

Suresh and his family belong to the Koli (also ‘Kori’) community of traditional weavers, listed as a Scheduled Caste. Suresh learnt weaving from his father nearly 14 years ago. The Kolis and the Ansaris, a Muslim OBC community, make up the majority of textile weavers in and around Chanderi town.

When we met him in December 2019, Suresh’s movements on the loom were like those of a pianist – he synchronously tugged on levers and wooden slats bobbed up and down, left and right, in a steady tempo that resonated within the room. The cotton bana (weft) was methodically woven into the silk tana (warp). Before the lockdown, he usually sat at the loom for 10 hours every day, sometimes 14 hours if there were extra orders.

The Chanderi textile gets its gossamer quality from the use of non-degummed raw yarn. Of all the handwoven items produced from the fabric, the Chanderi saree is in most demand. Its soft colours, silky lustre, and gold zari border and buttis (motifs) add to its distinction. The saree , which has been woven in the Chanderi region for more than 500 years, received a Geographical Indication certificate in 2005.

In Chanderi town, the trade is in turmoil. Weavers are left to negotiate with the seths for some form of payment. They are the hardest hit as the retail demand has plummeted

A simple saree can take four days to weave, says Suresh. But one with zari butti – handwoven brocade motifs – can take between 8 to 30 days, depending on the complexity of the design. The harmony of motion and hours of intense focus eventually make each unique Chanderi saree .

Before the lockdown, Suresh had steady work through the year, except for two monsoon months from the end of June to the end of August, when the cotton yarn swells in the humidity. “It is long hours of tedious work. But I enjoy weaving. It provides me food and livelihood. Without this, I don’t know what to do. We don’t have land to live off of, nor do we have savings to tide us over this crisis,” says Suresh.

Chanderi weavers typically earn about 20-30 per cent of the wholesale price of a product. A simpler saree , with a simple pallu , which the seth sells to retailers at Rs. 2,000, earns Suresh about Rs. 600. It takes four days of work. Most of the sarees he weaves sell at Rs. 5,000 in wholesale, and take about eight days each. The ones with intricate butti work can sell upwards of Rs. 20,000 and take up to a month to weave. A saree of more complex designs can even earn the weaver Rs. 12,000.

Two handlooms occupy an entire room in Suresh’s three-room house in Burhwar, where he lives with his wife, Shyambai, their five-year-old daughter and his mother, Chamubai.

When orders are steady, the two looms rattle in symphony, creating sarees daily. Suresh operates the loom that was bought by his father. Shyambai operates the second loom. Together, they earn around Rs. 10,000–15,000 per month. 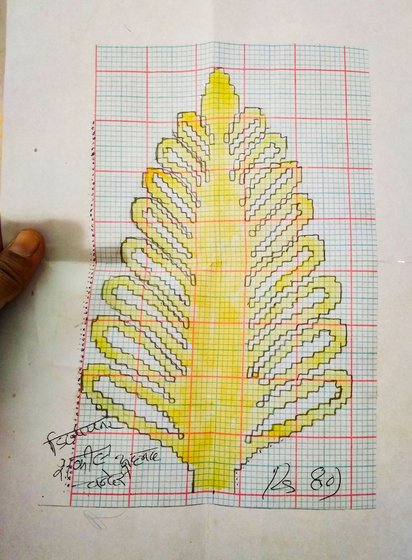 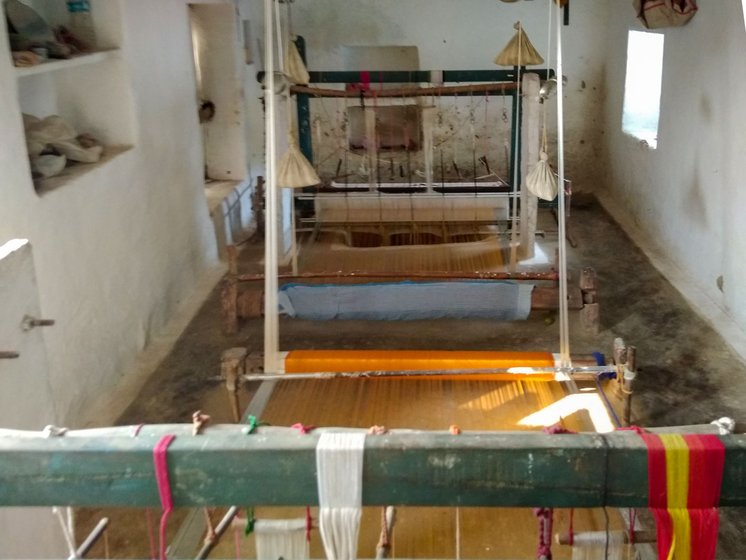 Left: A design card for a zari butti , given to Suresh by the seth to weave. Right: The two looms in Suresh and Shyambai's home face each other

Shyambai grew up in a weaving family in Chanderi, where she learnt the intricacies of the loom from her father and brother. “When I got married to Suresh, there was only one loom in the room. I could help out a little, but we couldn't increase our earnings. Two years ago, we took a loan of Rs. 50,000 to buy a new loom for me. With this, we could increase the number of sarees and fabrics,” says Shyambai. They have been paying monthly instalments of Rs. 1,100 to repay the loan taken from a bank loan under a special scheme for weavers.

At times, when orders from the seth are few, Shyambai helps Chamubai with collecting tendu leaves. Chamubai rolls beedis for a living and earns Rs. 110 for every 1,000 beedis she rolls. Her income has come to a halt due to the lockdown.

In Chanderi town, the trade is in turmoil. Weavers are left to negotiate with the seths for some form of payment. They are the hardest hit as the retail demand has plummeted. Most of the weavers work for traders or master weavers (usually, veteran weavers who are also traders).

In mid-April, Pradeep Koli, 33, who lives in Chanderi town, was told by his seth that labour rates would be slashed – from Rs. 1,500 per week to just Rs. 1,000 – until the “ mahaul [atmosphere] changes.” “We argued, and he agreed to enforce the new rates only for new orders and not existing orders. But if the mahaul doesn’t change quickly, we will be in big trouble,” says Pradeep.

Weavers in Chanderi were promised free government rations for the lockdown, but  received only 10 kilos of rice in April. “The nagar palika officials did a survey of my mohalla and promised us rations of dal , rice and atta [wheat flour]. But they gave only rice during the actual delivery,” says Deep Kumar, 42, who has been weaving for over 24 years. He is now carefully rationing out food for his household of six, and says, “Never did I have to think twice before putting sugar in my chai . Nor did I think that wheat rotis can’t be an everyday meal.” 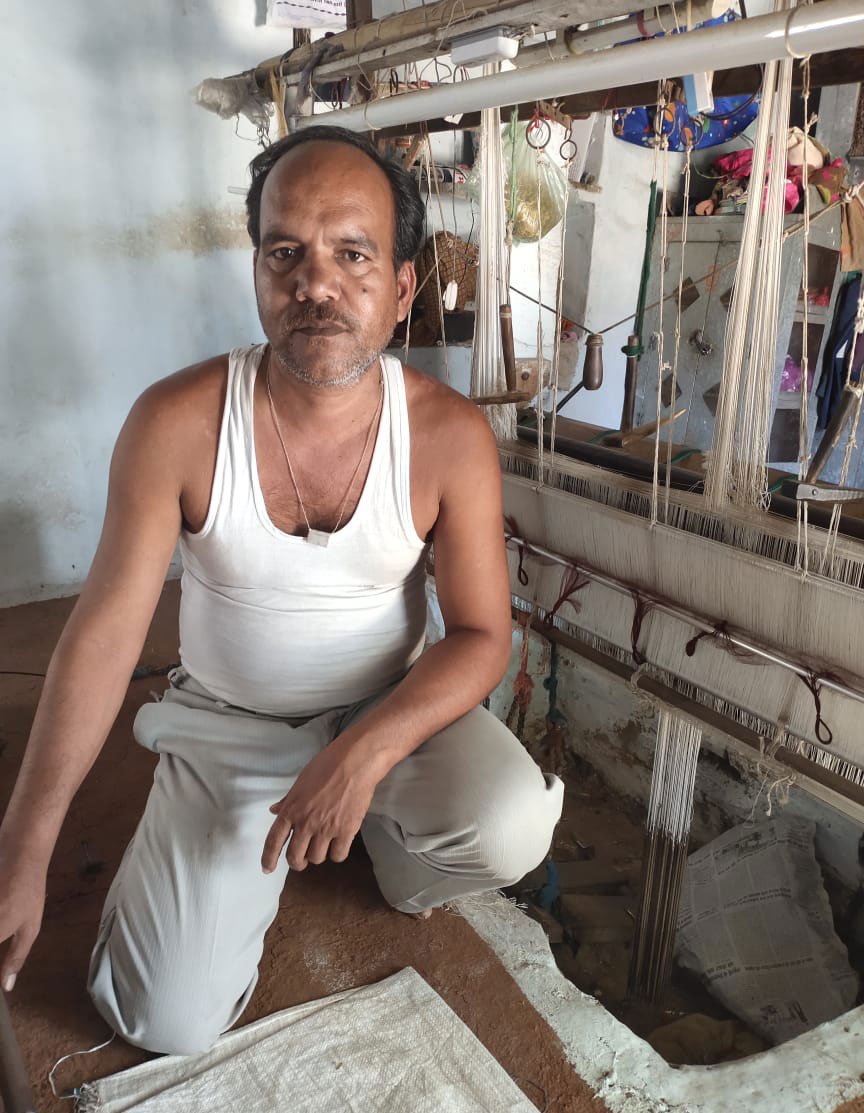 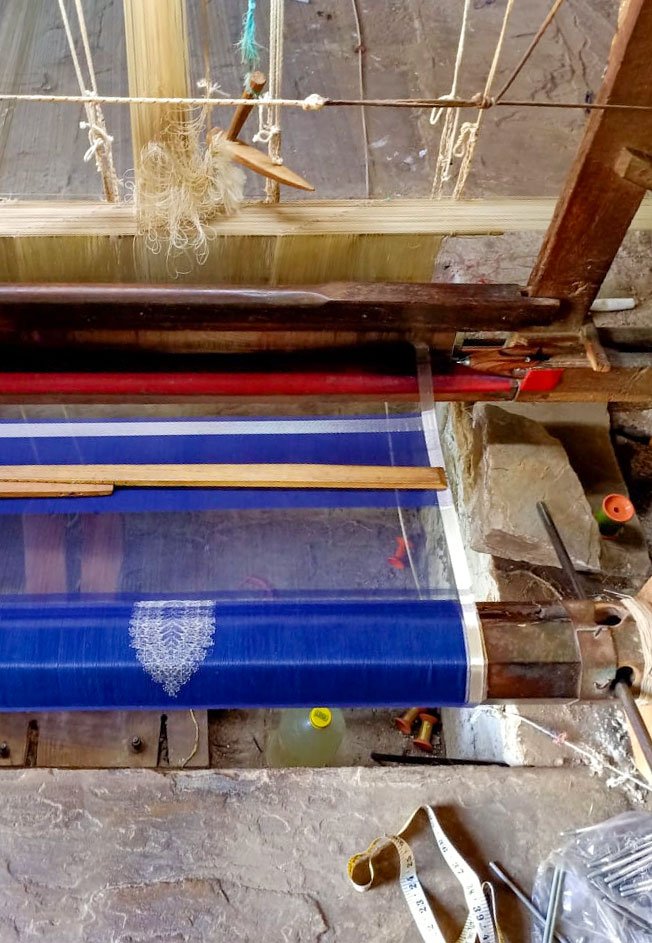 Mohammed Raees Muzavar (left), a weaver who works for Ansari. Chanderi weavers are finding it hard to get raw materials and to earn now

The looms in Deep Kumar’s house – the second operated by his brother – will fall silent soon because they have run out of yarn. The weekly income of the household has been reduced to Rs. 500, from an average of Rs. 4,500 before the lockdown, “I go on Saturday [every week] to collect the money from the seth . By Wednesday, I have no money left,” Kumar says.

“When powerlooms became popular, we rode through periods of falling demand for Chanderi sarees . We managed. But I can’t even understand a crisis like this. There is no supply, no demand, no money,” says Tulsiram Koli, 73, who has been weaving for more than 50 years, and received the National Award in 1985. His home in Chanderi has six looms, which are operated by him, his wife, their two sons and daughters-in-law.

Even though Ashoknagar district has not reported any Covid-19 cases so far, it will be a long road to recovery even after the lockdown is lifted.

“I don’t think we’ll get new orders for the next 6-7 months. Even after that, we’ll see a remarkable slowdown as people will not have the capacity to splurge on handwoven sarees . They will buy the [cheaper] powerloom ones,” says Aminuddin Ansari, a trader in Chanderi town who works with nearly 100 handloom weavers.

Before the lockdown, Aminuddin received orders worth Rs. 8-9 lakhs every month. His clients included showrooms in Delhi as well as large clothing brands that paid him an advance to procure raw materials. Aminuddin expects many weavers to leave for better-paying daily-wage labour in the coming months. 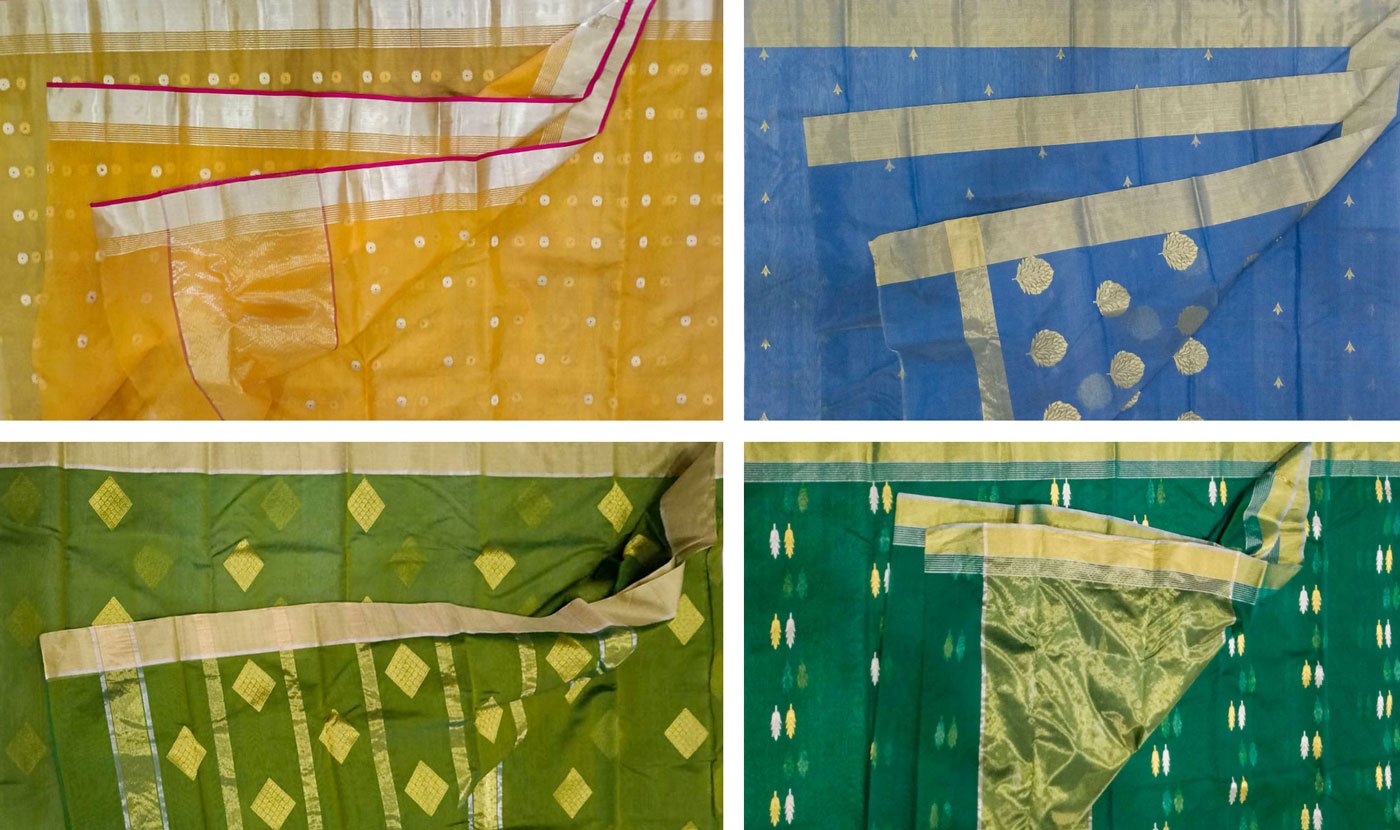 The Chanderi saree is appealing because of its gossamer quality, silky lustre and brocade motifs; but they are not selling in the lockdown

The showrooms and clothing brands have started cancelling orders. Anandi Lal, Suresh’s seth , who has 120 weavers working with him, says that many big brand showrooms usually send their personnel to Chanderi to place orders. “We got orders of Rs. 1 crore [from a big brand] in January this year. I bought materials worth Rs. 10-15 lakh to distribute to weavers. About five days after the lockdown was announced, we got calls from them asking us to assess how much work was in progress,” he says. Nearly 10 days after that, the orders were cancelled, save for work that was already on the looms.

Before the lockdown, weavers often spoke of how profits from the sale of a saree are largely cornered by the trader, who make a profit of around 40 per cent on the wholesale price after accounting for costs and payments to the weaver. Two years ago, Mohammad Dilshad Ansari, 34, and some 12-13 family and friends started an informal collective of weavers to come out of the shackle of intermediaries. They registered as independent weavers with the handloom corporation and started working on orders together. “We learnt to take orders on WhatsApp and social media like Facebook and Instagram,” he says. The collective has 74 weavers now.

But then came Covid-19. In March, Dilshad was in Delhi at an exhibition organised by Dastakar, an NGO that promotes crafts and supports craftspeople. He had hoped to sell products worth Rs. 12-15 lakhs there. But the Delhi government banned mass gatherings on March 13. “We ended up returning home selling products worth less than Rs. 75,000,” he says.

By the first week of April, buyers who’d placed orders for the rest of the year started to cancel them. Dilshad is now desperate. “I don’t get sleep at night. We don’t know when the sarees will sell again. Until then, what do we do?” he asks.

When the markets open again, the traders might have the resources to buy raw material and take on bulk orders, but, Dilshad predicts, “We will end up going back to the system of seths . Or many weavers like us may turn to doing daily-wage work outside Chanderi.”

Mohit M. Rao is an independent reporter based in Bengaluru. He writes primarily on environment, with interests in labour and migration.

Other stories by Mohit M. Rao