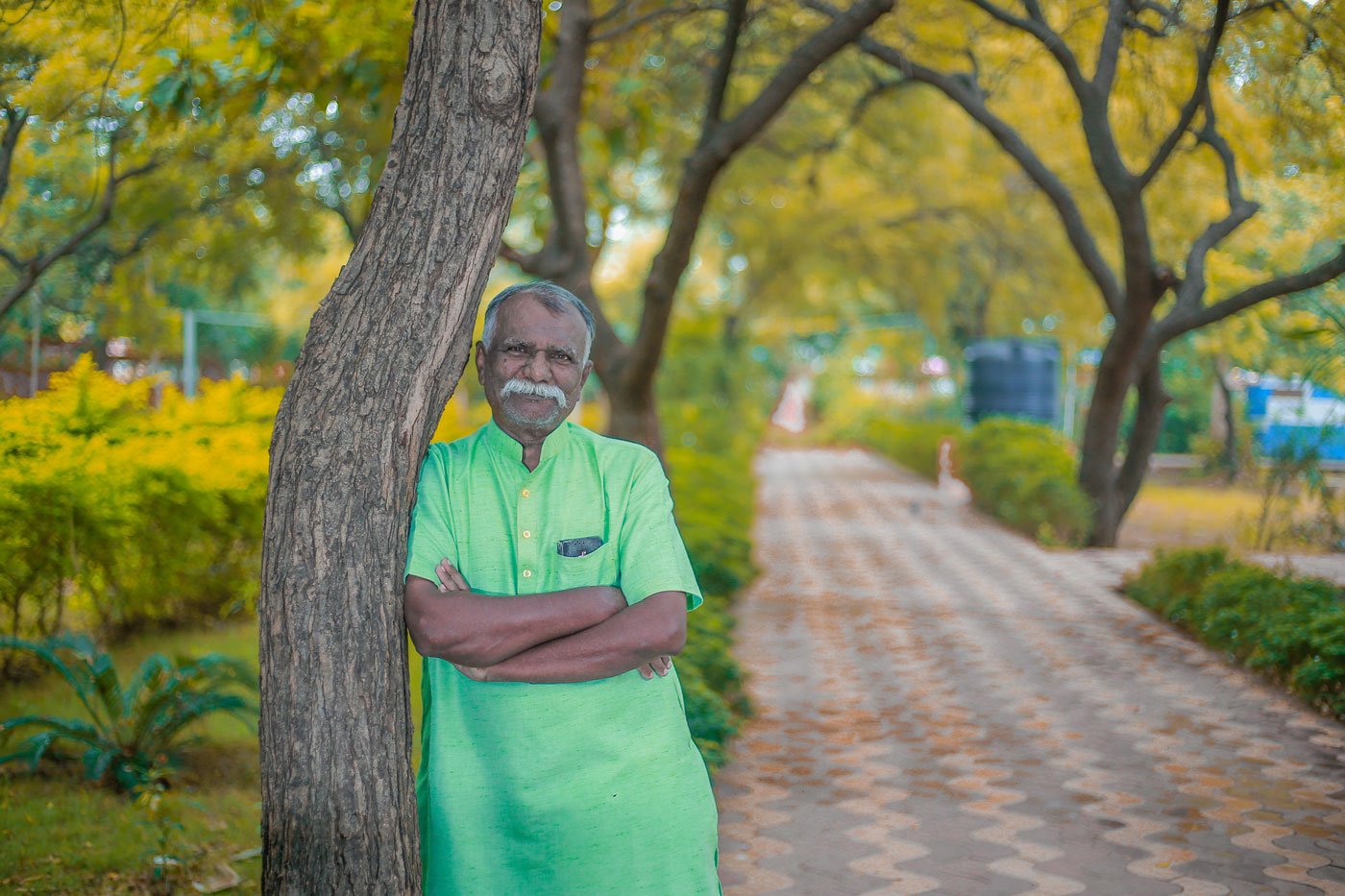 Memories of pox, plague, and pandemics in TN

From Tamil writer Cho Dharman, an invaluable oral history of how villages over centuries engaged with viruses, plagues and epidemics – relating that to the current Covid-19 pandemic and life under lockdown

It was women from a nearby village who found their beloved chieftain in the battlefield. They had come searching for men from their families. Instead, they found their leader Umaidurai badly wounded and bleeding, but still alive. They lifted him carefully and carried him back to their own village, three miles away.

The soldiers showed up soon after, looking for the ‘wanted’ Umaidurai. The women quickly covered him with a white cloth, wailed, shrieked and lamented, and told them he had died of smallpox. The troops ran away, fearing for their lives, while those of many men, including Umaidurai's, were saved.

It's a great tale and a true one. It happened over 200 years ago in Tamil Nadu. It finds vivid mention in early 19th century British accounts of the battle. And is now being narrated by Cho Dharman, celebrated writer, adding to the richness of the telling with his beautiful Tamil. Lending to its power by placing it in the context of present-day perceptions, fears and panic over the Covid-19 pandemic. And giving us an invaluable oral history of how villages over centuries engaged with viruses, plagues and epidemics.

"Umaidurai was the brother of legendary freedom fighter Veerapandiya Kattabomman, who was also the Poligar [chief] of Panchalamkurichi  [in southern Tamil Nadu]," says Dharman. “Speech and hearing impaired, Umaidurai was also called Oomee [locally] and Dumby [by the British]. He was much adored by his people and hunted by the East India Company, who sought to destroy this ‘notorious and celebrated chieftain’. "You can read all about it in Colonel James Welsh’s book, Military Reminiscences ," adds Dharman.

The historic battle of Panchalamkurichi was fought in 1799 about 50 kilometres away from Dharman’s house in Kovilpatti, a town in Thoothukudi district of Tamil Nadu. But unlike the British Colonel Welsh, who in his memoir calls Umaidurai's women rescuers "miserable and apparently half-imbecile creatures," Dharman is deeply appreciative of the native wisdom of villagers and the valour of the women who took Umaidurai home from the battlefield. "Tell me," Dharman asks, "didn’t those gutsy women do it knowing he was a wanted man, that the soldiers would follow them, that their homes could be destroyed?" 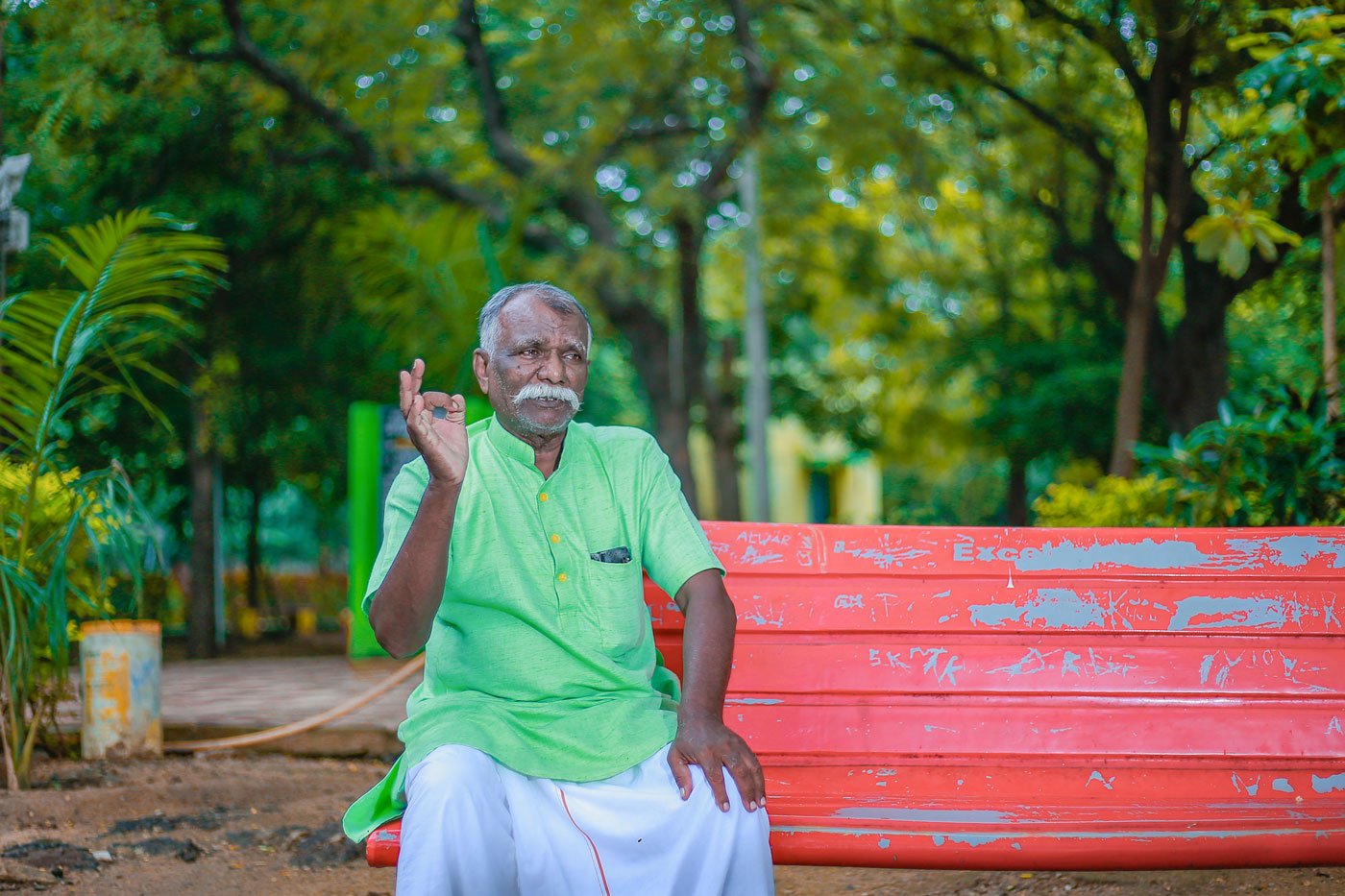 Cho Dharman: 'The Covid crisis is an ‘ idiyappa sikkal ’ [the tangle of rice strings in rice hoppers]. The poor are suffering, how do we help them?'

I met Dharman in Kovilpatti – a town recently in the news for a GI (Geographical Indication) awarded for its famous kadalamittai , peanut candy, in 2015. In his view, as he asserted at that time, " there is no such thing as Dalit writing . I may be a Dalit by birth, but don't segregate my writing." More recently, we spoke over the phone. "My routine hasn’t changed much [with this lockdown]," he chuckled. "Solitude is a way of life for me. I write in the first half of the day and spend the afternoons by the kanmai [pond], fishing.

"The Covid crisis is an ‘ idiyappa sikkal’ [the tangle of rice strings that make up the dish idiyappam or rice hoppers]. The poor are suffering, how do we help them? We know how to deal with cyclones and earthquakes. But in an inter-connected world, where we can travel halfway across the globe in a day – which was how the virus also travelled – we’re struggling to fight an enemy we cannot see."

Historically, villages here have witnessed many infectious diseases, some as deadly as Covid-19. "Take ‘ periya ammai ’ the Tamil name for the now eradicated smallpox. The skin of the infected person would break out into gooseberry-sized boils, which would cover the body from head to toe, and sometimes pop up over the eyes. It could very easily blind, maim, kill. Was it surprising that the very mention of it terrified the foot soldiers of the British Army?  Cholera and plague, similarly, were horrific diseases with high fatality.

"The three [pox, cholera and the plague] were called ‘ottuvar-otti noi’ – infectious diseases that spread with touch, contact and contamination. Our ancestors had no vaccines or medicines. The only treatment available was neem , a powerful antiseptic, and so they would bring tender neem leaves, grind them into a paste and cover all the boils. The pox-ridden person would look green." 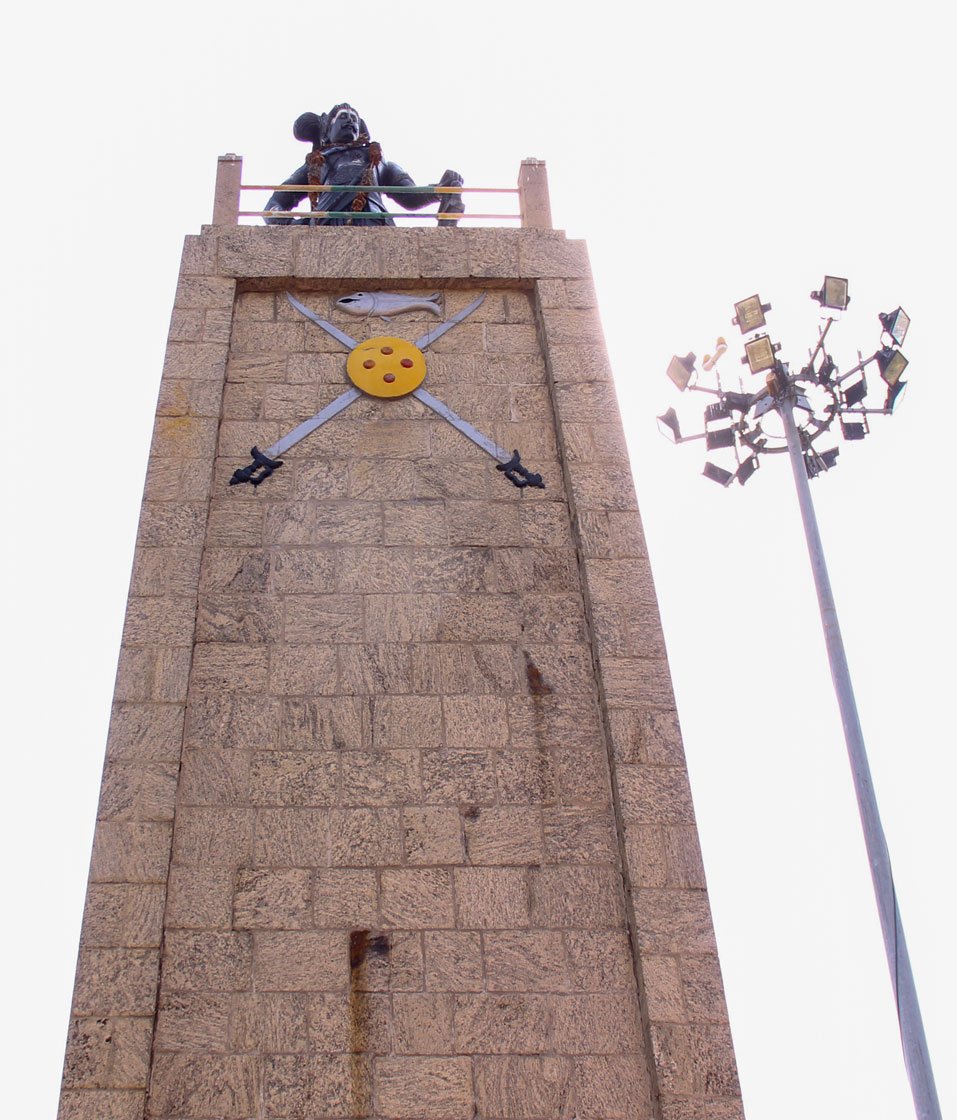 A monument to legendary freedom fighter Veerapandiya Kattabomman; he and his brother Umaidurai were hanged by the British in 1799. It's in Kayatharu, around 30 km from Kovilpatti, where Dharman lives, and he tells a riveting tale about Umaidurai that speaks of the courage of local communities

Dharman, 66, saw smallpox when he was a young lad in his native village Urulaikudi, about 10 kilometres from Kovilpatti in Ettayapuram taluka of Thoothukudi district. He writes extensively, in his short stories and novels, about this land – karisal bhoomi , or rain-fed region – and landscape, all of which have won him awards and acclaim. In 2019, his book Sool (a novel about the environment, set in his home village) received the prestigious Sahitya Akademi award.

Given how prevalent and fatal smallpox was, a specific language evolved to describe it, explains Dharman. "The term ‘thaai kootikitta’ – which implied that the goddess had taken the person – was used to communicate a death due to the pox. That was the refined and discreet way of mentioning it. There were phrases that gave an idea of the spread: ‘ammai vandhirukku’ , the pox has arrived, meant a couple of incidents had occurred; ‘ammai vilayaduthu’ , meant it was widespread and several households in the hamlet were down with it."

That bears some resemblance to the current classifications for Covid-19: clusters, community spread and containment zones. Another set of phrases, ‘ amma erangitta’ and ‘thanni oothiyachu’ , literally meant the goddess has left, and water has been poured. Although clunky and convoluted in English – and bereft of context – the phrases in their original signified the end of the infection. (Something like the end of quarantine and isolation in our time.)

"Only when the pox fully went away, and the person had bathed thrice, he or she could socialise with others. What we’re doing now for the coronavirus is not very different, but this time," he points out, "there’s a lot more –  sometimes media fomented –  drama and fear.

"The isolation that was practised to combat the older diseases was strictly enforced. Sprigs of neem were hung on the doorway of the house where an infected person lived, and this announced the illness to passers-by. When it was widespread, neem was strung together with straw and hung at the entrance of the village, to warn visitors and vendors of the disease raging inside. Noting the visual cue, they always went away."

Back then, it helped that people were self-sufficient, says Dharman. "Every home had its own supply of milk and curd. If you ran short, a neighbour would leave some outside your house and you could pick it up. Most people were farmers and grew vegetables, had a stock of rice and lentils. Bottle gourd, pumpkin, ridge gourd, snake gourd – we could pick them from our fields. Besides, it wasn’t as if we transacted in cash – much of the giving and taking was barter. If you didn’t have red chillies, you swapped some coriander seeds for it." 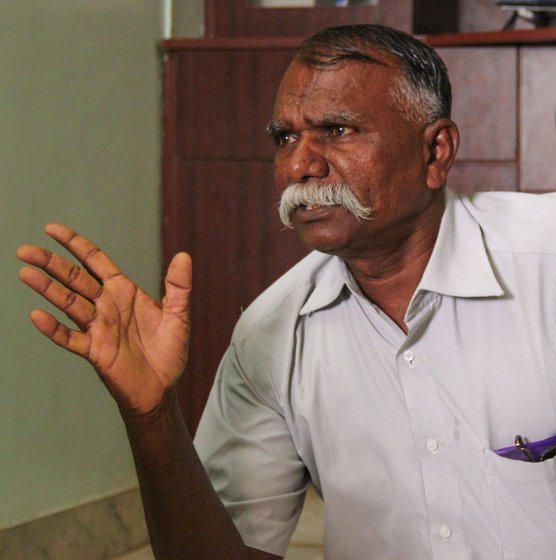 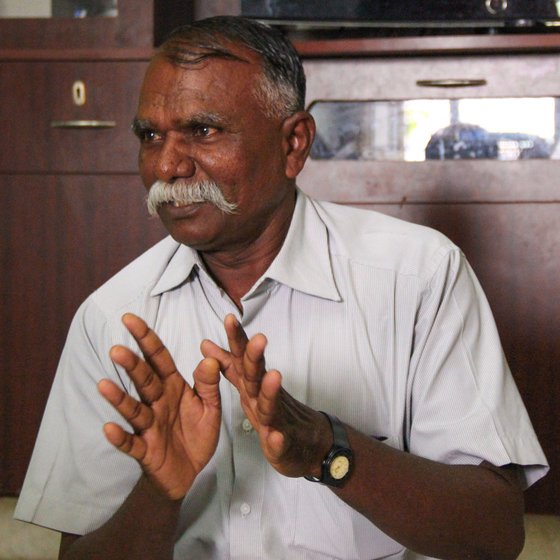 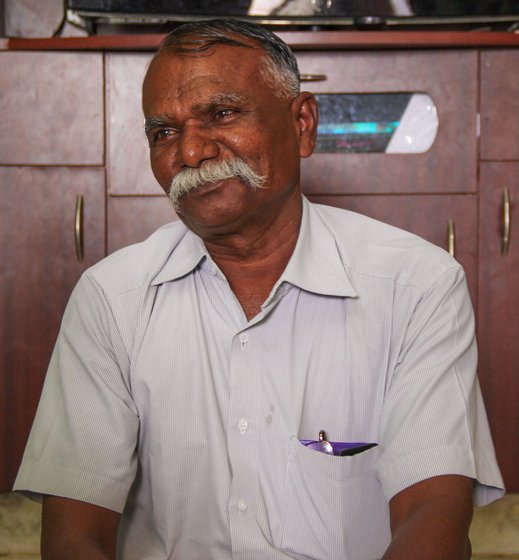 Dharman saw smallpox as a young lad in his native village, Urulaikudi: 'What we’re doing now for the coronavirus is not very different...' The three [pox, cholera and the plague] were called ‘ ottuvar-otti noi ’ – infectious diseases that spread with touch, contact and contamination'

Pox, Dharman says, was a summer disease, choosing the uncomfortably hot months to spread. Cholera and plague went around in the rainy season. And all of them took a toll. "My grandfather has told me stories of that time, of men taking someone to the burial grounds, who died of an infection, coming back to the village – only to find two more dead. They could not refuse to handle them; after all, most people in a  hamlet were related. And so, with no protective equipment of any sort, they hauled the bodies and went back to the burial grounds."

That is certainly different from recent news reports in the time of Covid-19 that inform us of stigmatisation, healthcare workers evicted from rental accommodation, relatives refusing to accept the bodies of Covid-19 victims, and citizens protesting their burial within close proximity. Closer home, Dharman talks about a man in his district asking his brother who had returned from Mumbai to leave the house. The reason? Infection was rampant in that coastal metro, and the local man was taking no chances.

"Isn’t this an erosion of our values, of even our humanity?" Dharman asks. "Compare this with the past: did those spirited women abandon Umaidurai fearing for their own lives, or courageously save his?"

Incidentally Umaidurai, as Col. Welsh wrote of him, was " doomed to grave a gallows " and so was his brother Kattabomman –  both were hanged  by the British in 1799. 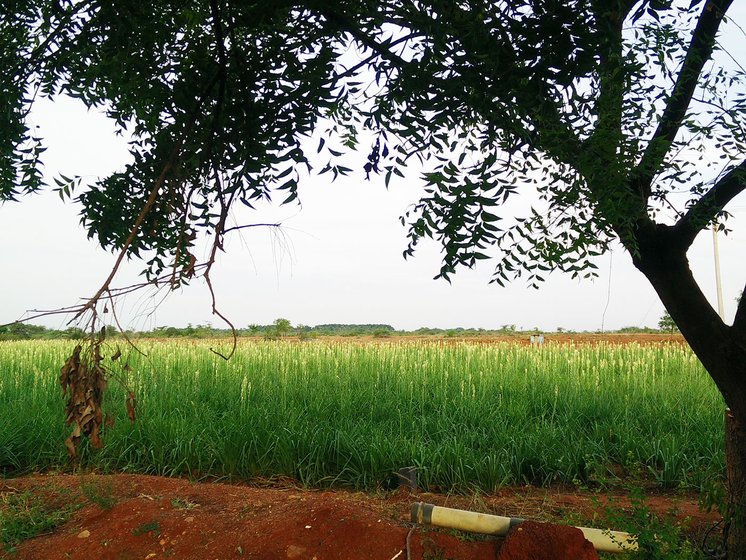 ' My routine hasn’t changed much [with this lockdown]. Solitude is a way of life for me. I write in the first half of the day and spend the afternoons by the kanmai [pond], fishing'

It’s not just the sense of solidarity that’s changed over time, says Dharman, but also our immunity. And that he attributes to our food habits. He bemoans the loss of millets in our diet and points out that doctors always recommend it. "Why are we not eating local foods? Traditional crops need less water, just two or three good showers would take those through to the harvest.

"Guava is good enough for me. It grows in hot weather; it is the fruit of my land. Why do I need apple, which grows in cold, hilly climates far away from my home, and which has to make a very long journey to reach me?"

His grandmother Seeniammal went a step further. Whenever he returned to his ancestral home in Urulaikudi from Kovilpatti, she would admonish him if he carried a water bottle. "She’d tell me to throw that water out, as it was ‘dead’. And she would order me to drink the well water!"

In his lifetime, Dharman has experienced a curfew just once before the arrival of Covid-19. That was an eight-day curfew following a caste clash in 1995 – when men faced arrest if they stepped outside their homes.

During those tense days and nights, Dharman met someone who became the protagonist of a short story: a pregnant woman who went into labour. It was the writer and his family who took her to a nursing home, late in the night. After which, Dharman ran around town looking for the supplies the doctor wanted.

"That wasn’t all. The truly peculiar part of the incident was that the woman and I belonged to the two castes that were at war. When the child was born, the couple requested me to name her. I called her Kala Devi [a reference to the kalavaram or violent clashes occurring at that point]. Do you know how I began that story?’ he asks, about the fictionalised version of those events that he wrote about."People who were my friends for decades became enemies, and those who were my enemies became my friends, and all of it happened in a moment…’

Sounds familiar? In the era of communalism, Covid-19, and the migrant exodus, maybe it should.