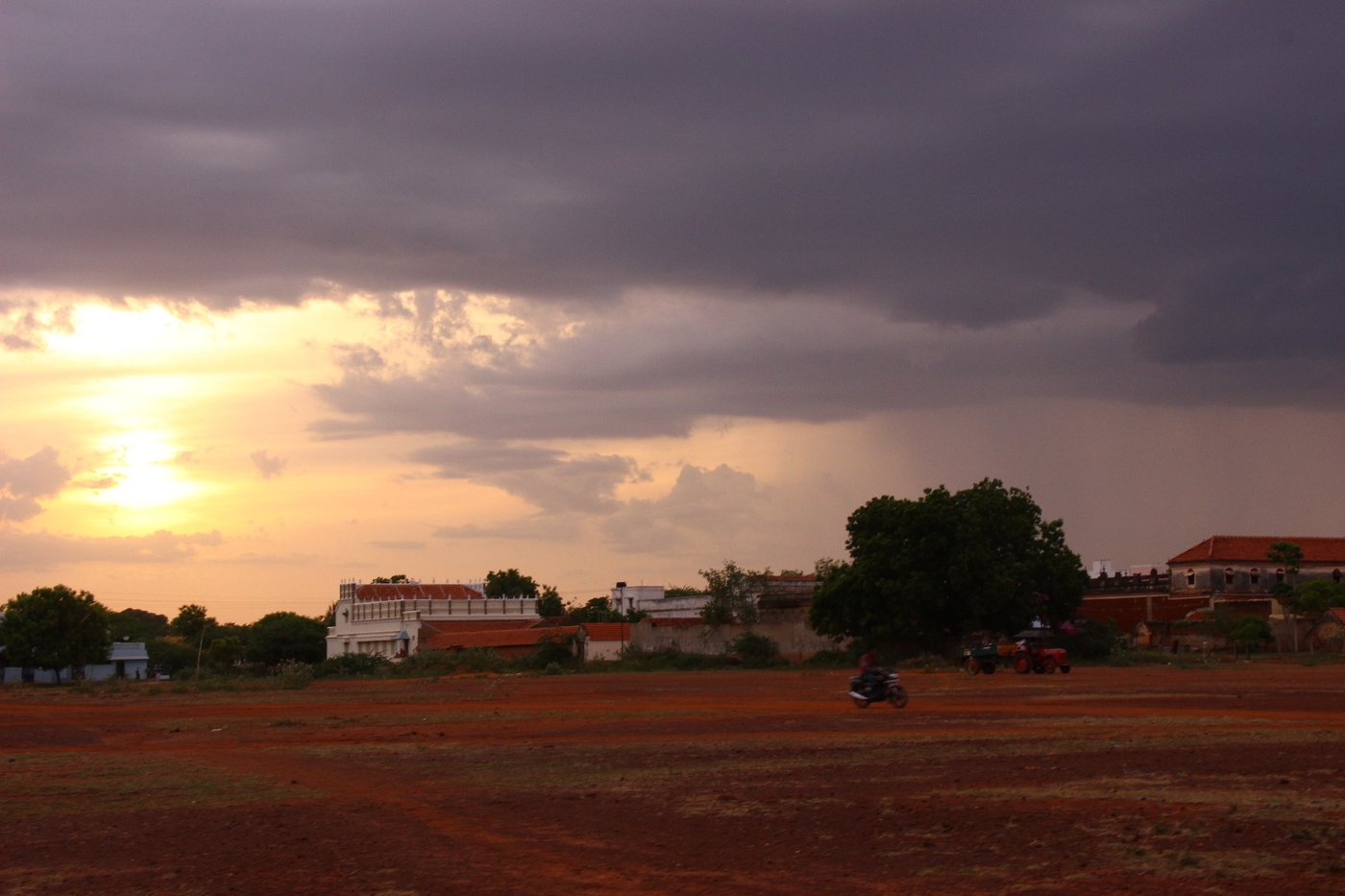 A rain-scented walk in Sivagangai

'Are there snakes here?' I asked Ilayaraja.

We were standing, very late in the evening, near a farm in Melakadu village, Sivaganga district, Tamil Nadu. I had gone there to meet well diggers - the region was dry, dusty, and finding water for irrigation was a job in itself. Ilayaraja lived there. He worked part-time at a private farm, and the rest of the time, on his parents' agricultural land. That meant he worked two shifts. And he’s only 23 years old.

The anxiety in my voice made Ilayaraja smile and he said yes, just few days ago, a 'Nagaraja' (cobra) had visited the area. Just as I stood debating if I should abandon the walk, he fetched up a torch.

'I'll come with you,' he offered, and so we went walking, our feet inside the white circle of the torch and our heads in the gathering cool of the night.

It was a rain-scented walk. It had poured at the end of a blazing day, and besides the frogs and crickets, all that I could hear was Ilayaraja’s wheezy breath. ‘I was always asthmatic,’ he said, this too with his ready smile. Although a migrant – his family moved here from Salem when he was a baby – he knew Sivaganga well; he knew every bump and curve in the road, the motor-bikes, and the men who drove them. 'Land was very cheap here, 23 years ago. My parents sold their property in Salem, and my father and his brothers bought ten acres here for Rs.50,000. Now, do you know this fetches upto 3 or 4 lakhs an acre?' he pointed to the right and the left, and the torch drew wide, white circles on tapioca and sugarcane fields. 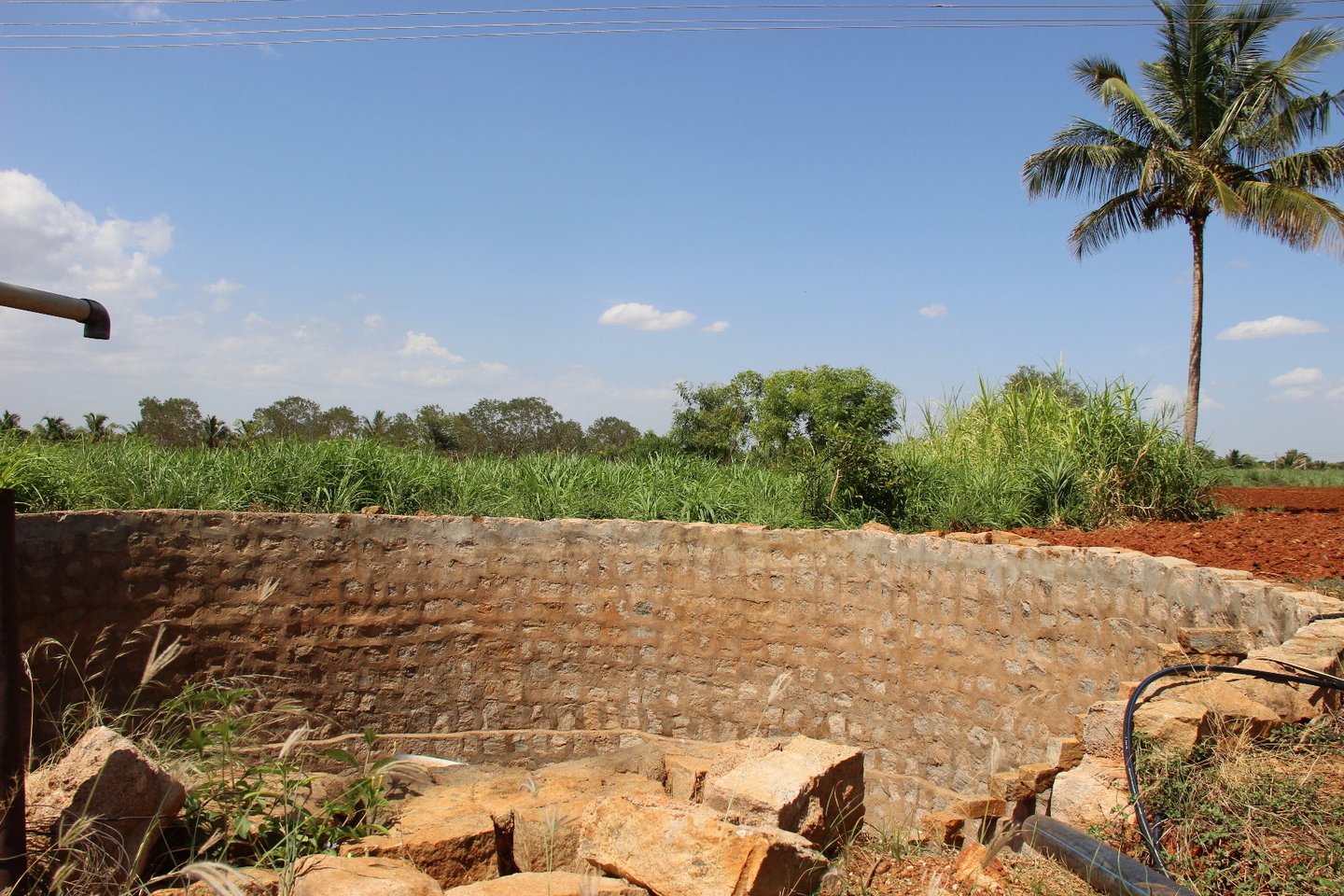 'Once, all this was dense scrub jungle. My family cleared it with their hands. Do you see that well over there, under that that tube light? That belongs to my chithappa (uncle). And behind that, do you see the house? Hidden behind those coconut trees? That's my house!'

He said 'my house' with much pride. It was a pucca structure, with electricity that had come to his house nine years ago. And with that, very rapidly, modernity. 'You can't see a bullock and hand plough around here if you wished! And no landline telephones, only mobiles,' he patted his pocket with a smile.

All this might have destroyed the rural idyll - one that urbanites yearn for - but Ilayaraja delights in the modern touches. It's made life simpler. 'Earlier, we cut the sugarcane by hand. Now, one machine harvests, and another collects. It's done in no time!' He appreciates the saving in time, in man-energy, because he's expended huge quantities of both very early in life. 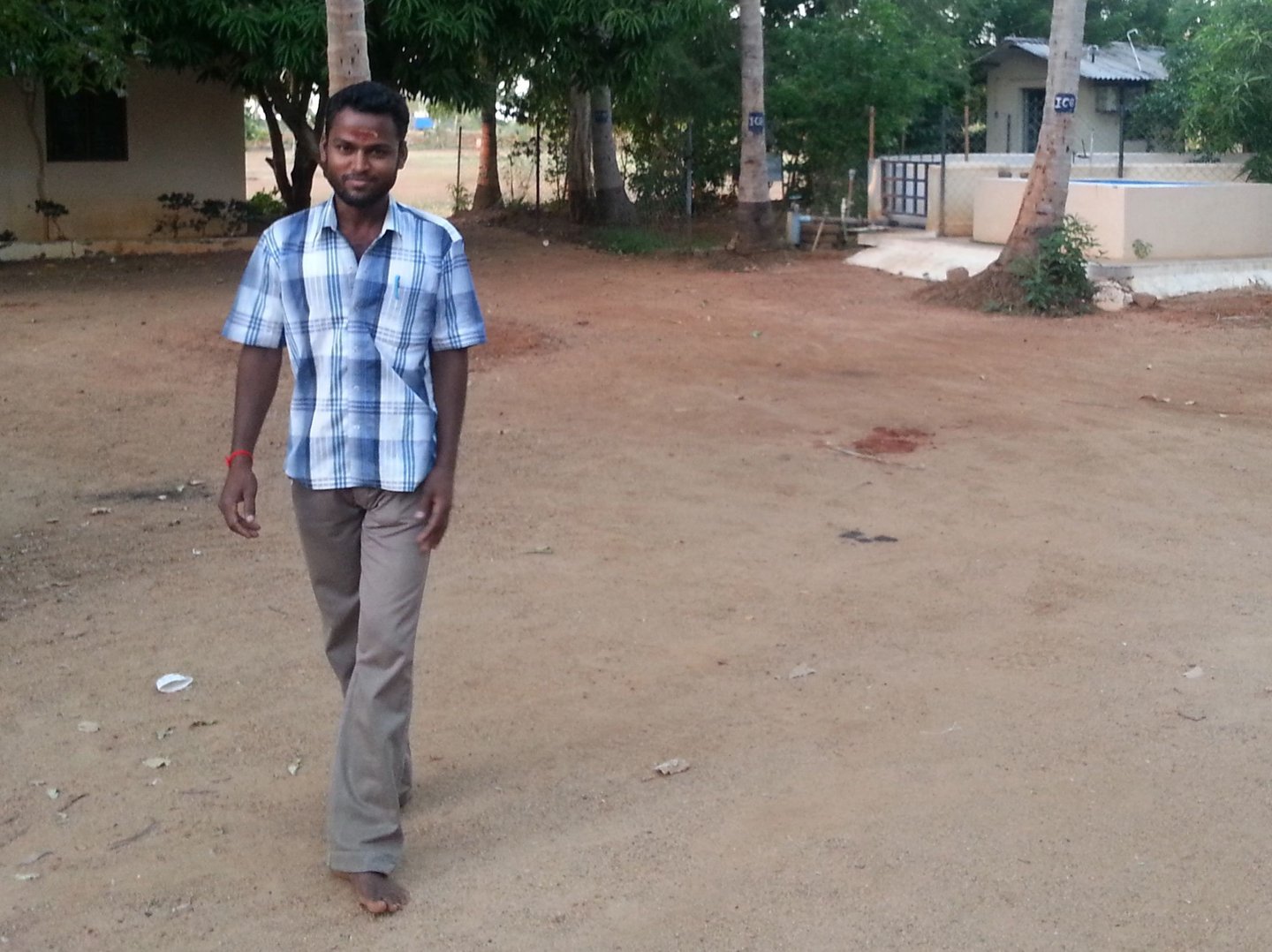 But it's not as if he now spends the mornings on an easy chair, with a folded newspaper and a coffee mug. He's knee deep among plants, bending, plucking, sorting, cleaning. His family grows paddy, vegetables and flowers. ‘Ladies finger and brinjal, both need daily hand-picking. At least brinjal can keep for a day or two in the plant, but not ladies finger... it hardens very quickly,' he laughed and I joined his laughter, thinking of the famous ladies-fingers test, that sellers hate and buyers love (snap the tip, if it doesn’t break clean, reject it!)

After that, the produce - few kilos of each vegetable – is sold. 'Everyday, my father takes my mother to the market in his two-wheeler. He drops her there, and goes to the field. She sells everything and comes home by share-auto.' By then, Ilayaraja has clocked in half-a-day at his other job – a mix of odd-jobs and outdoor work. By the time he’s home, at 6pm, the cattle have been tended, the cows milked.

Most people here raise cows and goats and chicken. The cows in these parts are almost always Jersey/ cross breeds, because they give a lot more milk, when they're fed well, on fresh grass and oil-seed cakes. Except, that’s not always possible. 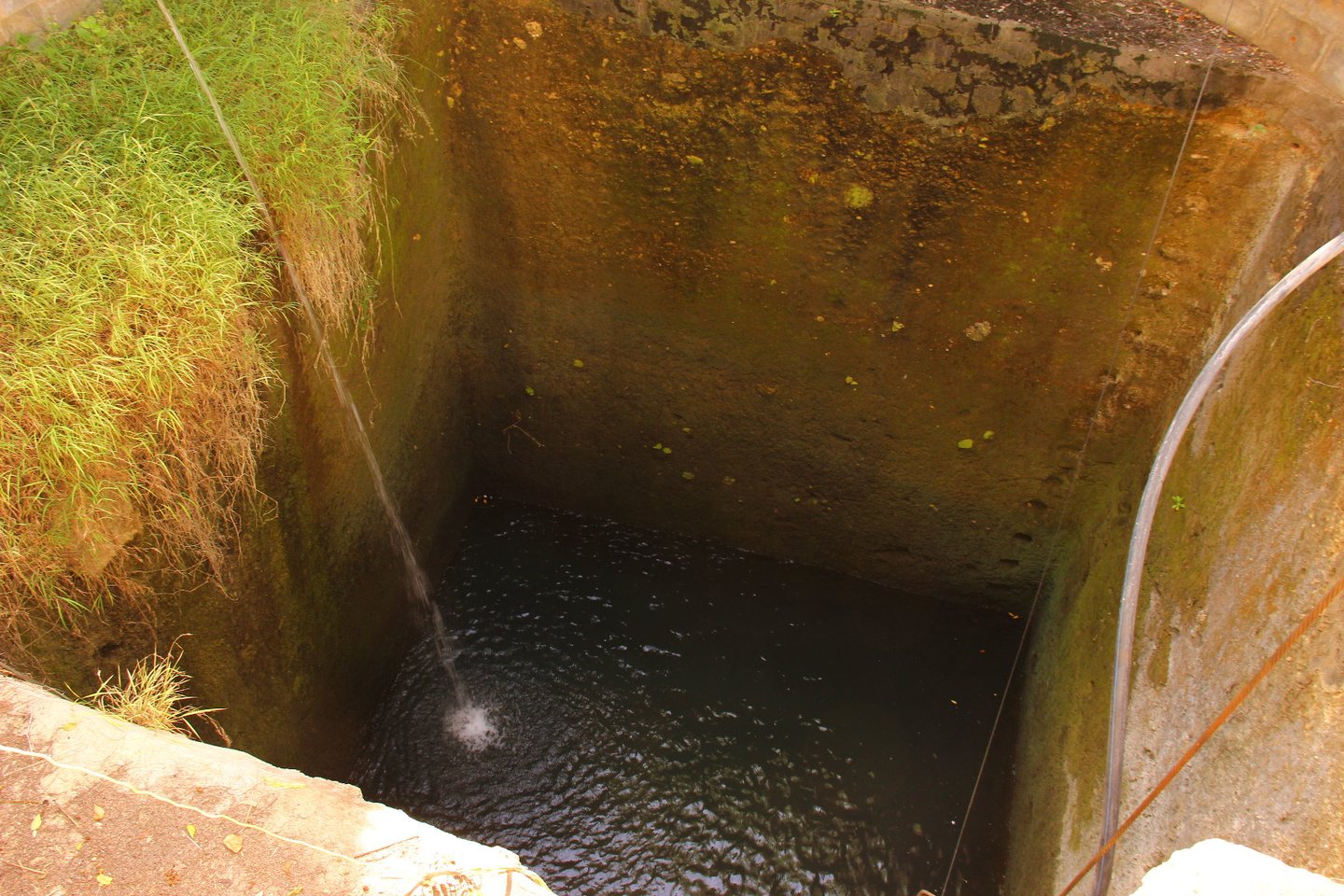 Rains often fail. ''The soil is very good, everything grows well here. The problem is water. See, my uncle’s 60 feet well has only four feet of water. So we only use it as a thotti (storage tank). Water is pumped in from the bore well. Deep bores here go down 800 feet, 1000 feet...' Ilayaraja explained. I tried to wrap my head around those numbers: it was hard.

Harder still was to see empty fields. Few years back, with good rains, paddy was sown extensively, the crop had been exceptional, and the families didn't want for rice. But the last two years, with very poor rain and a plummeting water table, land is left fallow. And yet, sugarcane is grown, with drip irrigation, an irony and a debate Ilayaraja dismissed with a ‘what-can-I-do’ smile.

The night had pressed in, the stars were out and glinting, and the motorbikes had all gone home. We turned back, and walked past the sugarcane and tapioca and his uncle’s well. The air was cool, and smelt lovely. ‘Mmm,’ I inhaled, and turned to him, triumphantly, and asked if it wasn’t a turmeric field we were walking past. ‘Haha,’ he burst out laughing, the torch drawing white zig-zags on the uneven road. ‘That’s
the smell of pesticide. We had sprayed it just this morning!’ 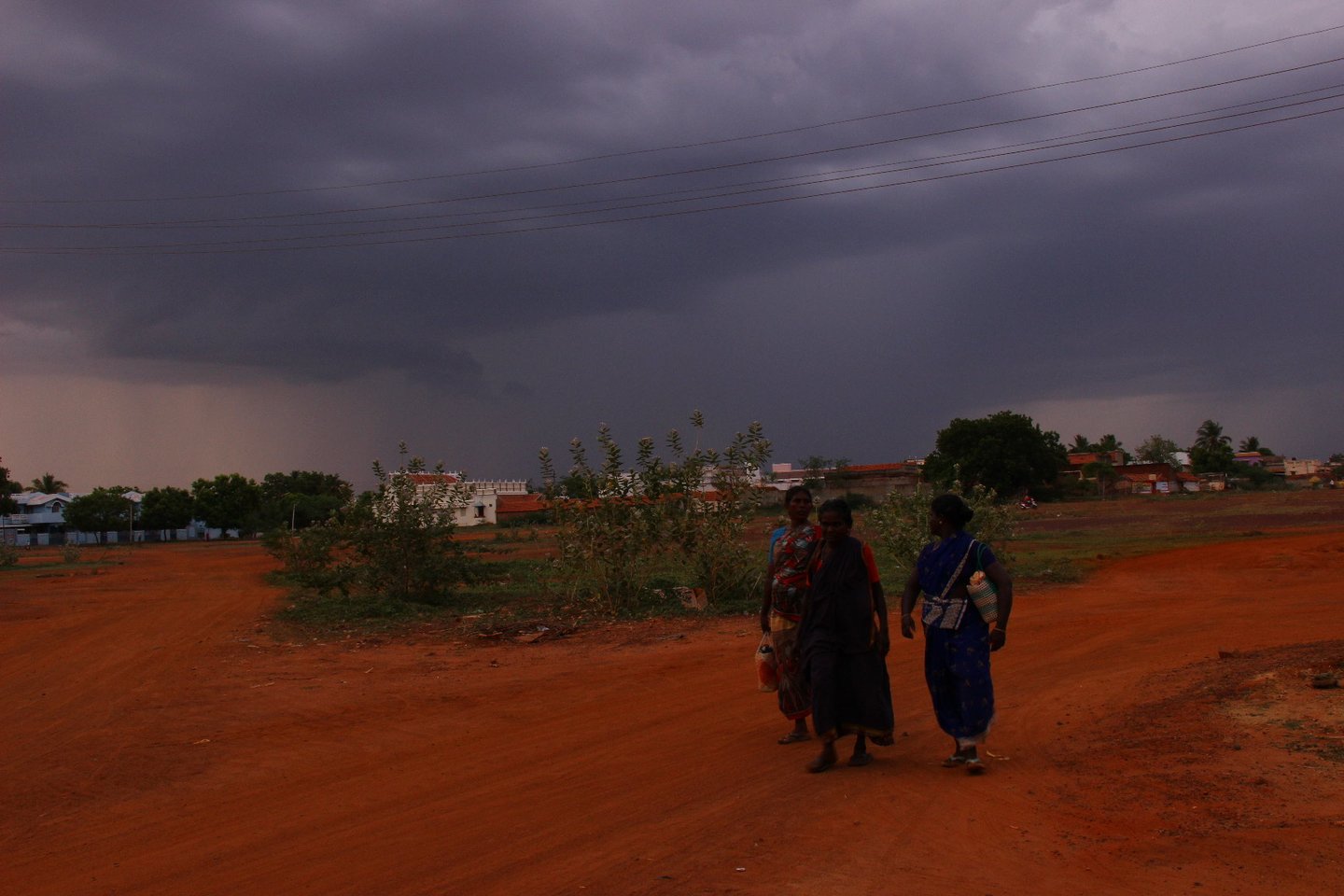