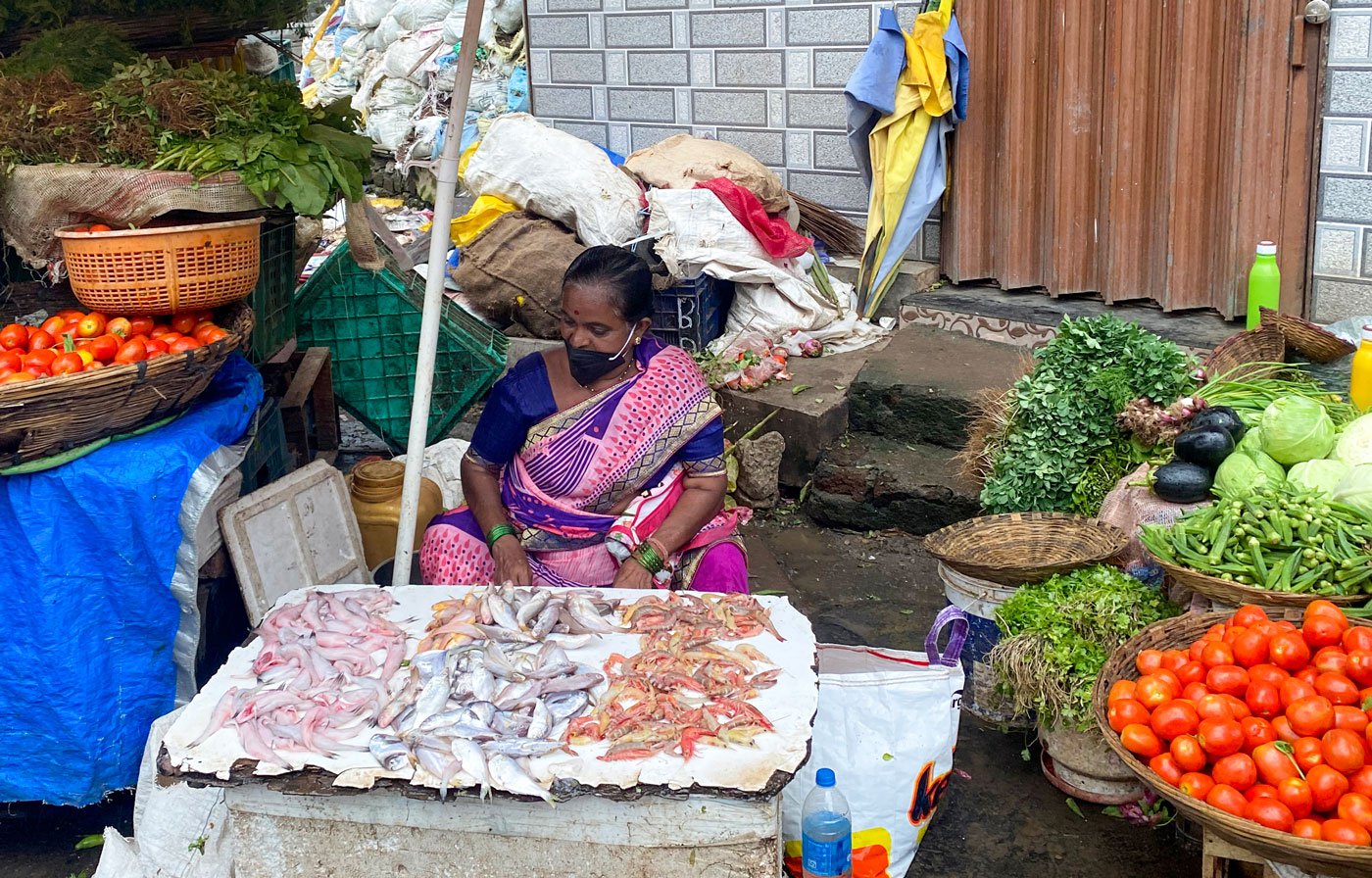 Lockdown losses, major surgeries, jobless husbands and other struggles have hit Vandana Koli and Gayatri Patil, who sell fish at Mumbai's Colaba market. But the two find comfort in their close friendship of decades

By 7 a.m. on a warm Monday morning Vandana Koli and Gayatri Patil are waiting anxiously on the jetty at Mumbai’s Sassoon Dock to see if the boat carrying fish has arrived.

They have walked for around two kilometres from their home in the Koliwada locality in Colaba to the dock that morning to pick up fish. This is their routine five days of the week – purchasing fresh fish and selling it at the nearby market (on Tuesdays and Thursdays, they say, many people don’t eat fish, so sales are low).

“On Sundays we do the most business, but yesterday I didn’t make a profit. I have to cover those losses or else we will struggle to get rations for this week,” says 53-year-old Vandana. She and 51-year-old Gayatri are both from the Koli community (listed as a Backward Class in Maharashtra) and have been close friends for 28 years.

At the jetty, the boats begin to arrive and the roughly 40-50 women waiting there start gathering around the fish auctioneers – middlemen who sell the fish for boat owners or fishermen. “ Chal, aata de 200 madhe [Come on now, give it for 200],” Vandana says. She settles on Rs. 240 for a small portion of  prawns. By around 9 a.m., after more determined rounds of bargaining, she and Gayatri have acquired prawns, shrimp and bombil . Depending on the rate of the day, they usually purchase a total of 7 to 10 kilos of fish each time.

Vandana signals to Gayatri: “ Ghetla, nighuya (Got it, let’s go).”

'Ladies here don’t go for check-up, they just take painkillers. They don't have money to spend on hospital bills, and because of Covid they are scared to visit doctors...'

Watch the video: 'I feel like telling god – let us have at least one good day’

“We would have bought more, but Covid has slowed down our business," says Vandana (see Mumbai fishermen: no shelter from this storm ) . "People don’t buy from us as much as before,” she adds, while helping load the blue plastic tub full of fish onto Sita Shelke’s head. At Sassoon Dock, Sita and other porters charge about Rs. 40-50 to carry tubs and baskets to the fish market in Colaba. That day, Gayatri has sent her basket on the two-wheeler of a neighbour who was passing through.

“Earlier, I would carry it myself on my head, but after my heart operation I can’t lift much weight,” Vandana says. Once Sita settles the tub on her head, the three women start walking towards the market around two kilometres away, stopping only once in front of a cold storage shop where Vandana hands out two 10 rupee notes for a large basket of crushed ice.

In December 2018, Vandana had to undergo an angioplasty. After a night of chest pains her husband had taken her to the state-run JJ Hospital in south Mumbai’s Nagpada area. There the family was informed that Vandana had suffered a heart attack. “I can’t even carry a one-litre water bottle since the operation. It’s difficult to bend or do any kind of running around. Despite my health being poor, I have to work for my family,” she says.

Looking at Gayatri, she adds “She used to come to hospital every day with dabba [tiffin]. When I was admitted, she would send food for my husband and son. It was a relief knowing that she will take care of my family like I did when she was going through a tough time. Since we both are poor, we couldn’t help each other with money, but we have always remained close friends.” 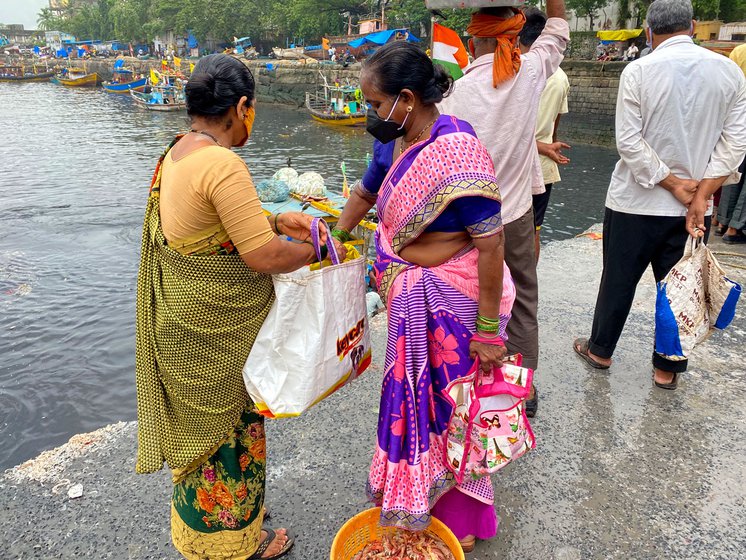 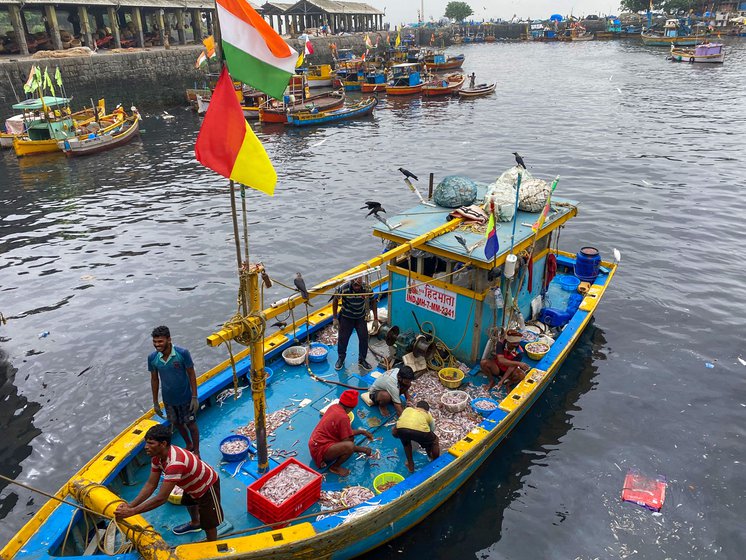 Vandana Koli and Gayatri Patil waiting for the boats to come in at Sassoon Dock. Once they arrive, they will begin determined rounds of bargaining

Gayatri tucks her saree pallu a little lower to show me the scar of a kidney transplant procedure. “My daughter needed a kidney and by god’s grace mine was a perfect match,” she says. “But she suffered a lot. She would cry in pain.”

In May 2015, Gayatri’s 25-year-old daughter Shrutika began feeling unwell all the time. Her family took her to a number of local clinics but the fever kept coming back. Her face turned black and her legs became swollen. The family then took her a state-run hospital in south Mumbai, but, says Shrutika, the treatment there was inadequate. “I was already really sick, so baba decided to not take a risk any longer. After that we went to [the privately-run] Bombay Hospital,” she adds. There, Shrutika and her parents were told that both her kidneys had failed and she needed a transplant.

After a 10-day stay in hospital and three months of isolation in a rented room in  Koliwada to mitigate the risk of infection, the family faced a bill of around Rs. 10 lakhs. “Mummy and baba had to borrow money from everyone we know. I was kept on dialysis. Our relatives helped us and baba took a loan [of Rs. 3 lakhs] from one of his employers,” Shrutika says. The family received some financial help from an NGO too, and, she adds, “He is still repaying that loan amount.”

Since the surgery both Gayatri and Shrutika have been advised by doctors to not lift heavy objects. “How will I work without carrying stuff? I still have to pay for my daughter’s medicines every month,” Gayatri says.” These cost around Rs. 5,000. “She can’t stop taking even one goli [tablet]. It is painful for her. One-one rupee has to be kept aside to save. My back and legs hurt a lot some days, but I am not the only one. Most women work in pain. Even Vandu had an operation. 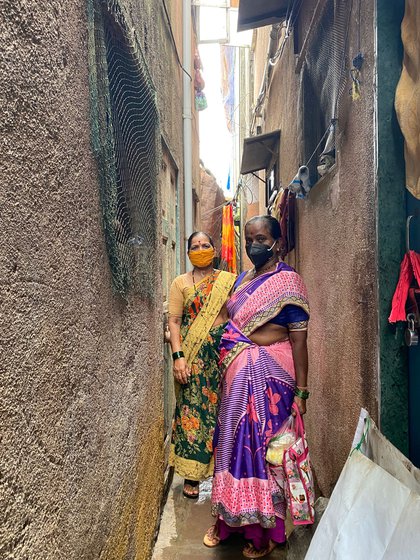 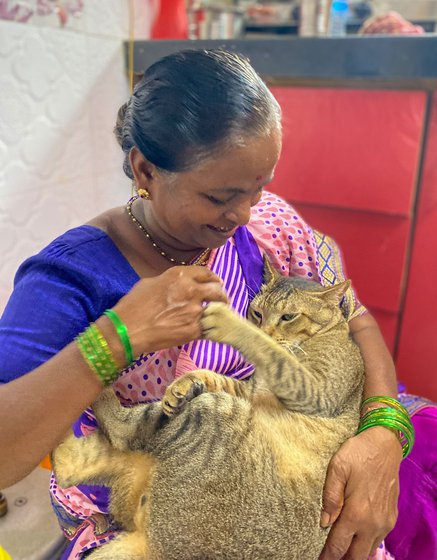 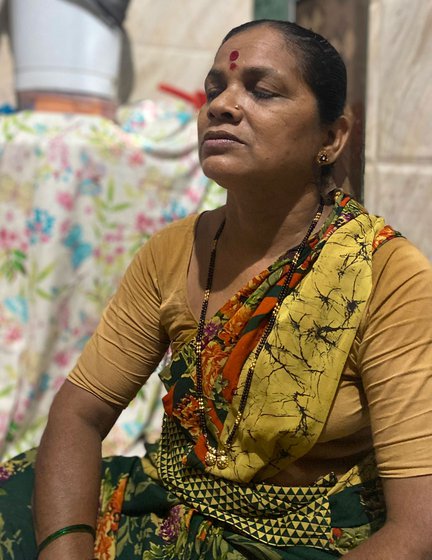 Left: Colaba Koliwada is home to 800 families. Middle: Vandana at home in a lighter moment. Right: Gayatri gets emotional while talking about her daughter

“Ladies here [at Koliwada] don’t go for check-up, they just take painkillers. They don't have money to spend on hospital bills, and because of Covid they are scared to visit doctors. There’s only one small [private] clinic inside the Koliwada which is always full. And that too was closed during the lockdown [last year],” adds Gayatri. “Our people have suffered a lot. People think Kolis are rich. But there are poor people too in our community. During the lockdown we prayed to god to at least give us one good day. The dock was closed. We did not even have onions-potatoes at home – such was our condition. We were surviving on dal .”

Her locality of very narrow lanes, with small one or two floor structures on either side, is home to 800 families and 4122 persons (Marine Fisheries Census 2010). With parts of Colaba declared a Covid ‘containment zone’ for a while last year, “Nobody could get in or out of Koliwada. Even people who wanted to give us rations were not allowed in. It was a difficult time. We had to reduce our meal portions,” says Vandana, recalling the first few months of lockdown from March 2020.

Even after markets reopened, many families here couldn’t buy vegetables, she adds, because they had no work or money. Before the lockdown, both Vandana and Gayatri made a profit of roughly Rs. 500 a day. This went to zero for a while – according to regulations all fishing activities are anyway annually halted from the end of May 21 to August 1. After that, since September last year, their income has been around Rs. 300 a day five times a week. 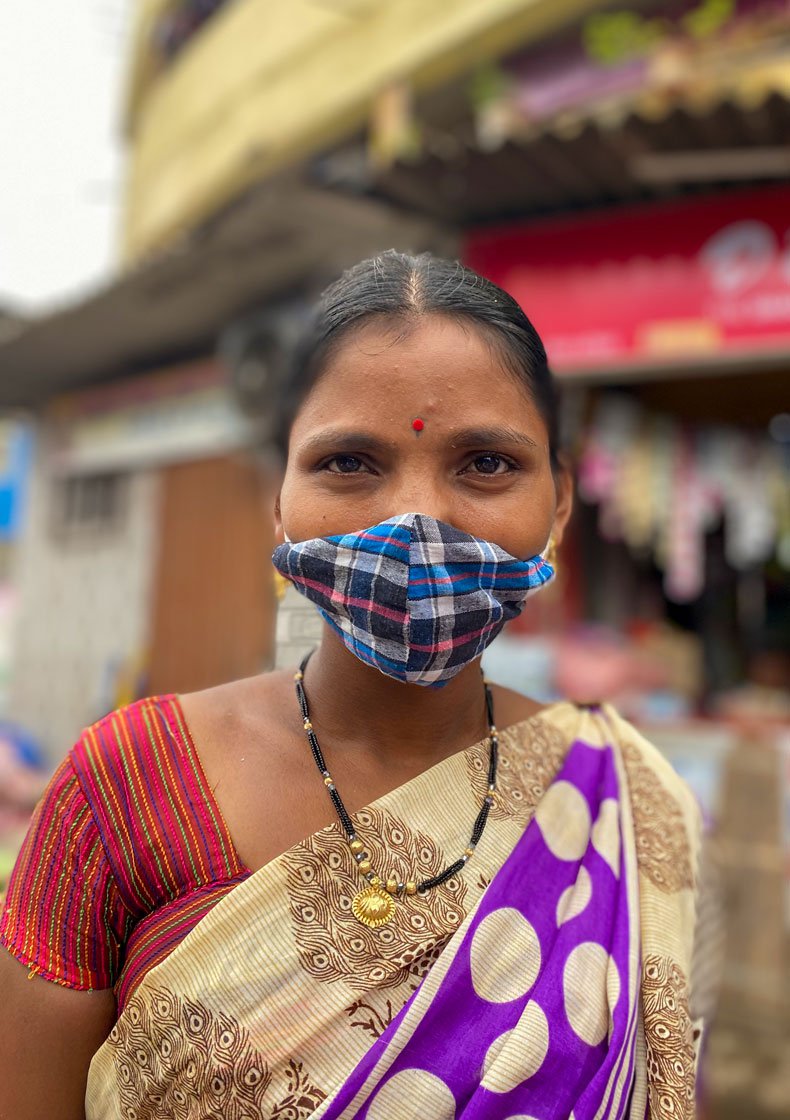 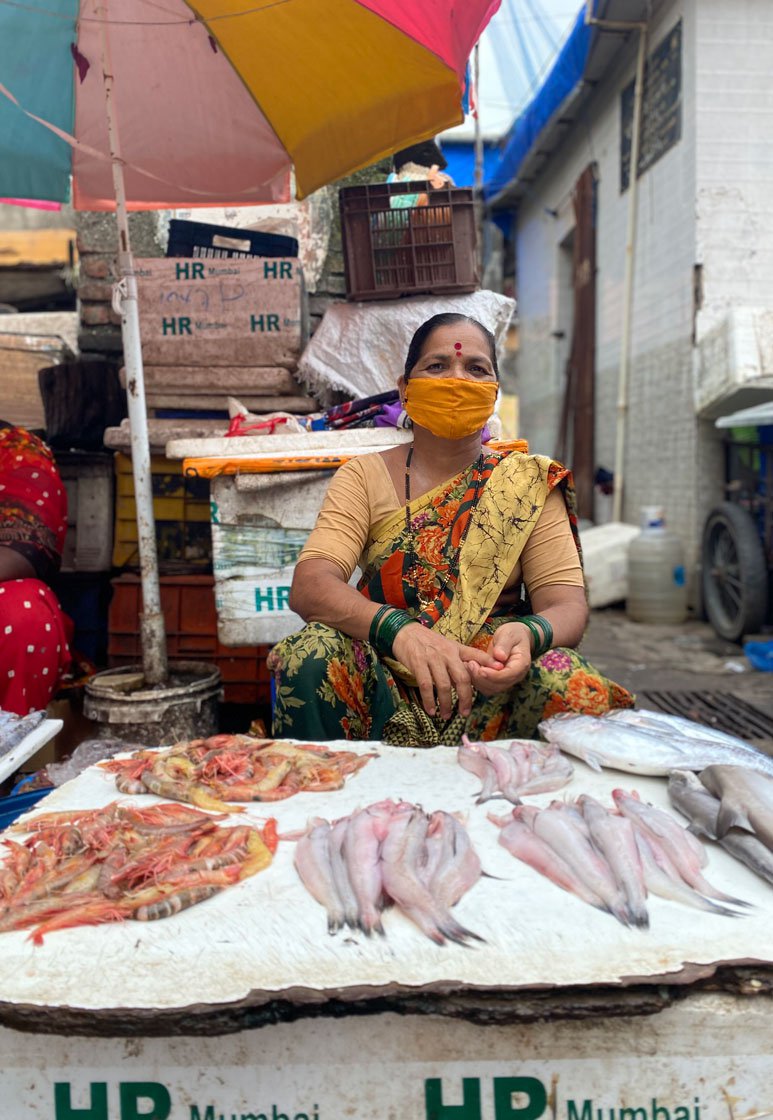 At Sassoon Dock, Sita Shelke (left) and other porters charge Rs. 40-50 to carry baskets to the fish market in Colaba. That day, Gayatri (right) had sent her basket on the two-wheeler of a neighbour

We continue walking towards the market around 10:30 a.m. As we near the spot where the two friends set up their stalls, they run into one of Gayatri’s previous employers. She asks her if any domestic work is available and then starts talking about daily expenses. “Apart from the 6,000 rupees house rent every month, we have to also pay 200 rupees a day for the space where we set up our stall and sell fish. Our husbands and sons are also out of work,” says Vandana.

Her husband, Yashwant Koli, 59, and Gayatri’s husband, Manoj Patil, 49, both worked as labourers mending fish nets at Sassoon Dock, and earned Rs. 200-300 rupees a day before the lockdown began in March 2020. Vandana says her husband now spends his time drinking and hasn’t been back at work at all. Gayatri’s husband injured his left arm in January last year and has been unable to work much since then at mending nets.

Vandana's and Gayatri’s sons, Kunal, 34, and Hitesh, 26, worked as delivery persons for a food delivery company, earning Rs. 3,000-4,000 a month, but lost their jobs during the lockdown and have been unemployed since. In June this year, Shrutika found a job in a shoe store in Colaba, and is now earning Rs. 5,000 a month. 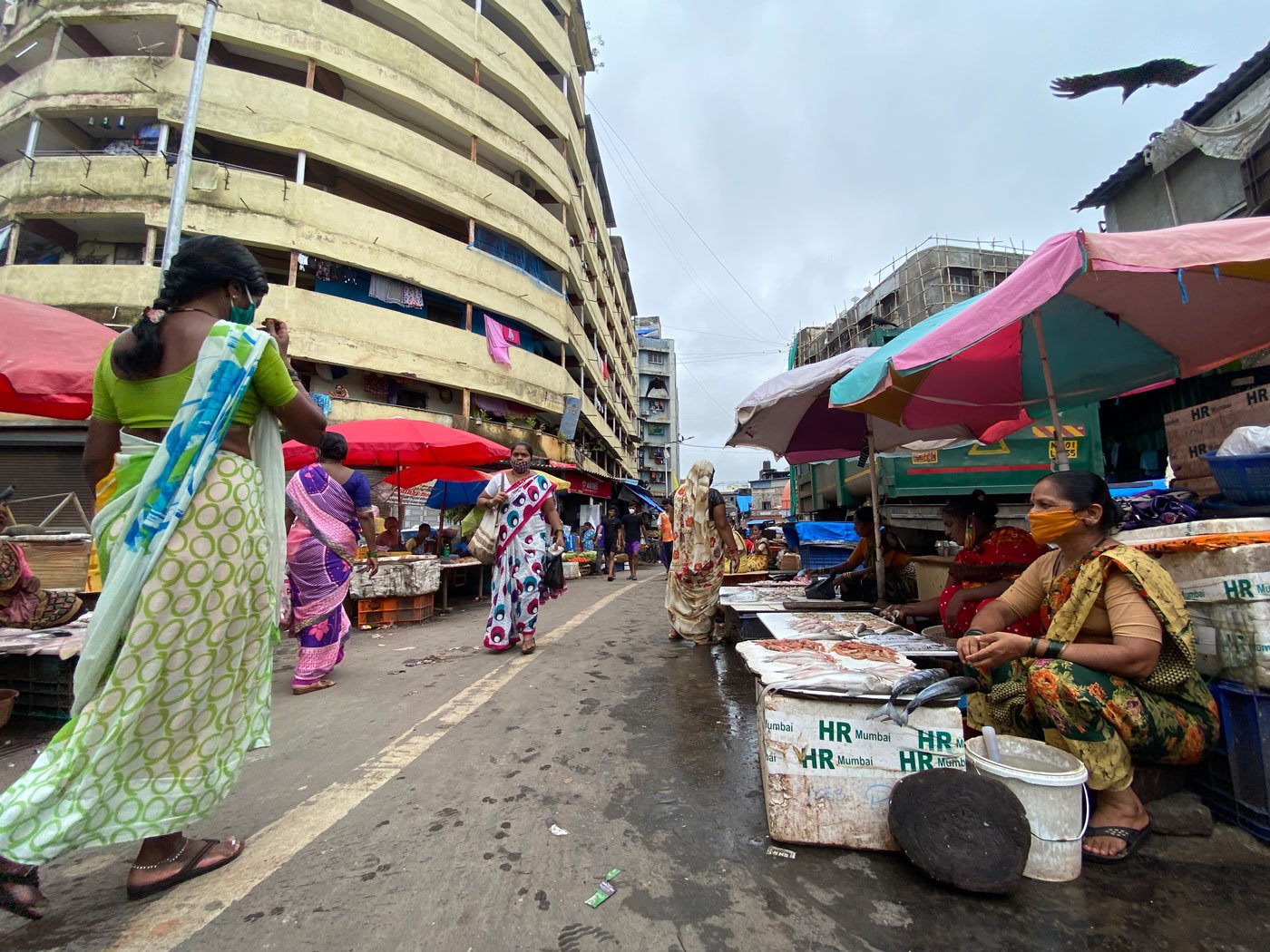 As we reach the market. Vandana pays Sita for carrying the fish and with the help of a man passing by brings down the basket from her head. She puts a big battered thermocol box on the ground and over it places a wooden plank, on which she spreads out the fish. It’s nearly 11 a.m. by the time she starts calling out to customers: “ G he ga tai", "Tai, ithe ye", "Ghe re, maushi .”

Gayatri too sets up her stall and looks out for buyers. Around 1 p.m., she has to leave for domestic work at a nearby apartment in Colaba – with fish-selling income on a low, she took up cooking and cleaning jobs at a few houses in September 2020, earning around Rs. 4,000 a month for five hours of work. “During the lockdown, one of the madams did not give me even one rupee. I am a temporary worker. I have to do this out of desperation," she says, leaving her stall in Vandana’s care. “She will sell these too. We help each other out like this. If she doesn’t have rice, I give her. And if I don’t have dal , she gives me.”

Both Vandana and Gayatri have been selling fish for around four decades. Gayatri grew up in the Koliwada in Mazgaon in central Mumbai and moved to Colaba after her marriage 28 years ago, while Vandana has always lived in Colaba Koliwada.

Other than the ever-taller  buildings, Vandana says not much has changed in her neighbourood. “I grew up in these lanes. My parents were also in the fishing business. I have worked hard all my life but I don’t wish the same fate on my son or for any children of us Koli people.”