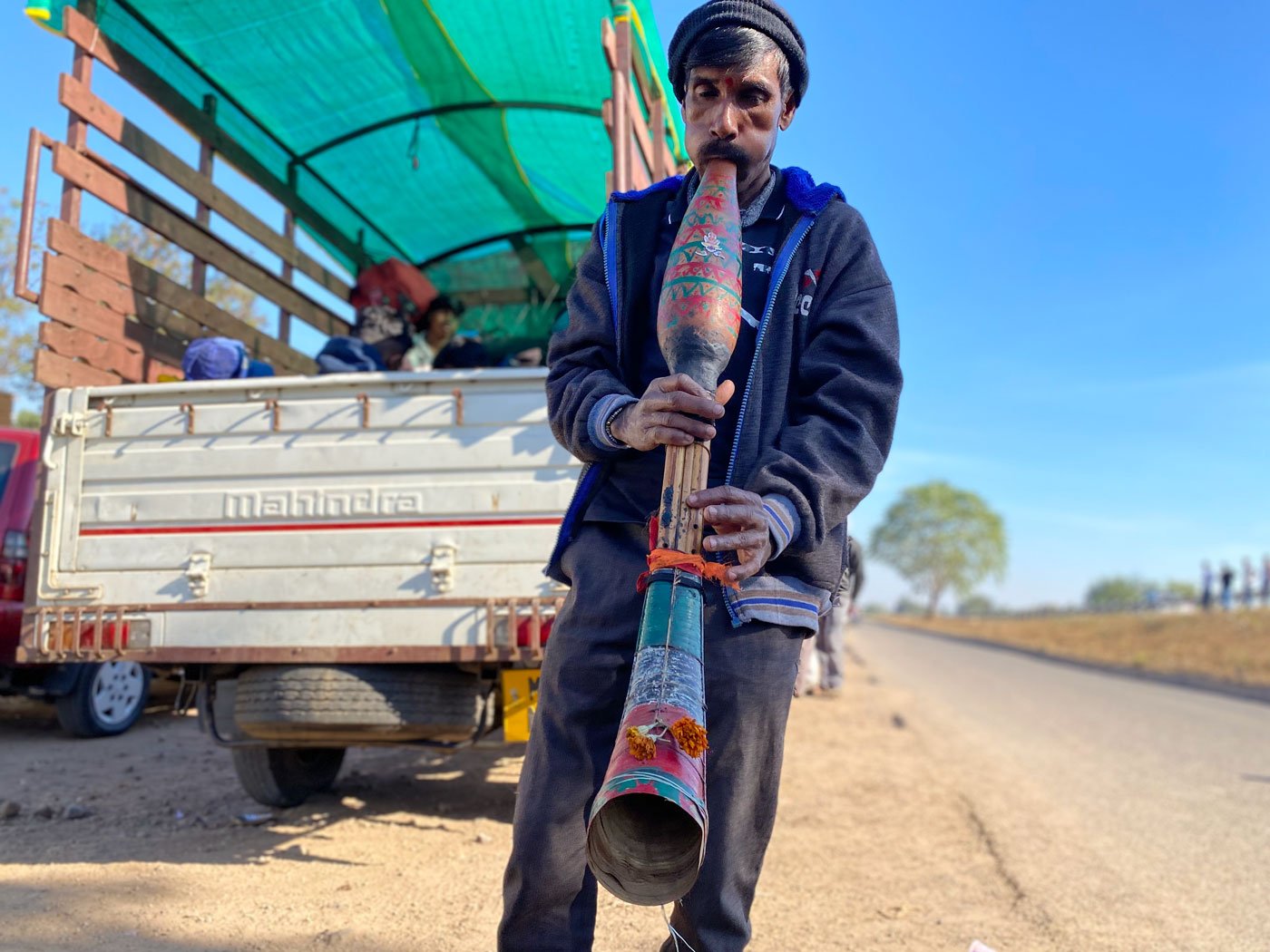 ‘We will play and dance our way to Delhi’

Around 1,000 farmers from various districts of Maharashtra, many of them Adivasis, are trying to join the protestors in Delhi – in vans, tempos, jeeps and cars. It is a colourful and determined caravan

“We played the tarpa in the [2018] Long March and we are playing the tarpa today too. We play it at all important events,” says Rupesh Roj, referring to the wind instrument he is carrying. Rupesh is among the farmers from Maharashtra going towards Delhi this week – in vans, tempos, jeeps and cars – in support of other farmers, many of them from Punjab-Haryana, who are protesting at the capital’s borders.

After the new farm laws were passed in Parliament in September this year, lakhs of farmers have been protesting across the country, demanding these laws be scrapped.

Around noon on December 21, around 2,000 farmers from nearly 20 districts of Maharashtra – though mainly from Nashik, Nanded and Palghar – gathered at the Golf Club ground in central Nashik for a jatha, a vehicle morcha to Delhi. They have been mobilised by the All India Kisan Sabha, affiliated with the Communist Party of India (Marxist). Of these, around 1,000 have continued journeying beyond the Madhya Pradesh border, going towards the country's capital city.

Among those who gathered in Nashik was 40-year-old Rupesh from Palghar’s Vada town, who belongs to the Warli  community. “We Adivasis have a lot of shraddha [respect] for our tarpa ,” he says. “Now we will play and dance our way to Delhi.” 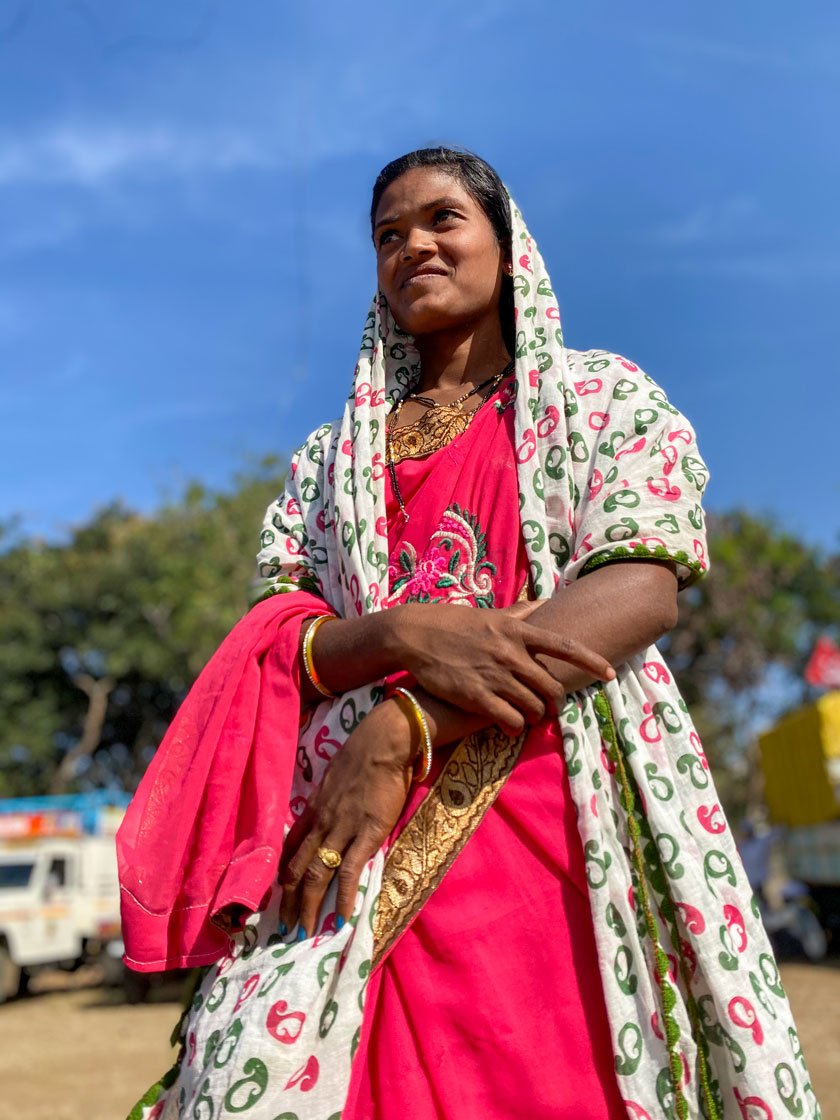 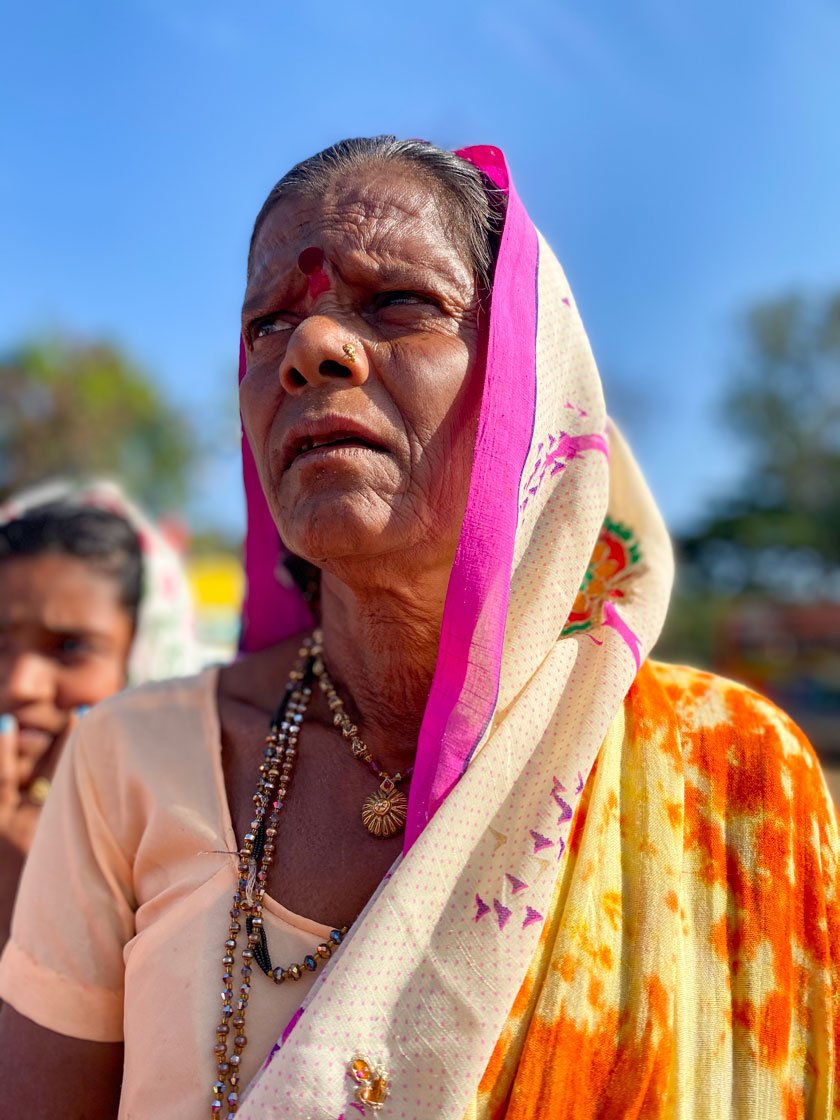 “I am tired of carrying water pots across two kilometres every day. We want water for our children and our land,” says Geeta Gangorde, an Adivasi labourer from Maharashtra’s Dhule district. Mohanabai Deshmukh, who is in her 60s, adds, “We are here today for water. I hope the government listens to us and does something for our village.” 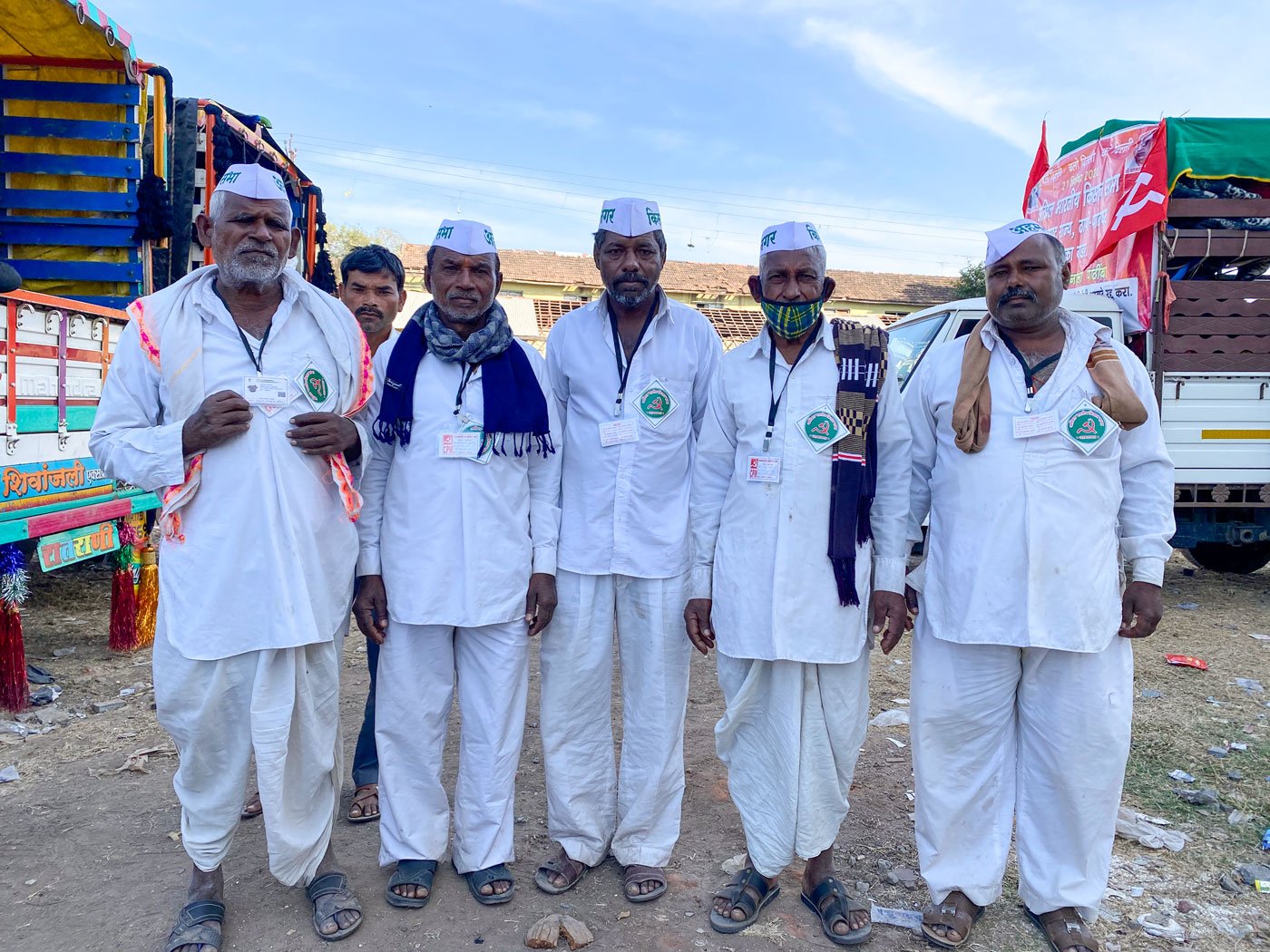 Radhu Gaikwad’s (extreme left) family owns five acres of land in Shindodi village of Sangamner taluka in Ahmadnagar district, where they mainly cultivate millets and soybeans. “Our Ahmadnagar is a drought prone area. We have a lot of land but we can’t cultivate it. When we go to sell [our harvests] we don’t get proper prices in the mandi . All the big leaders from our district don’t give us Adivasis anything. They only give to other people like them.” 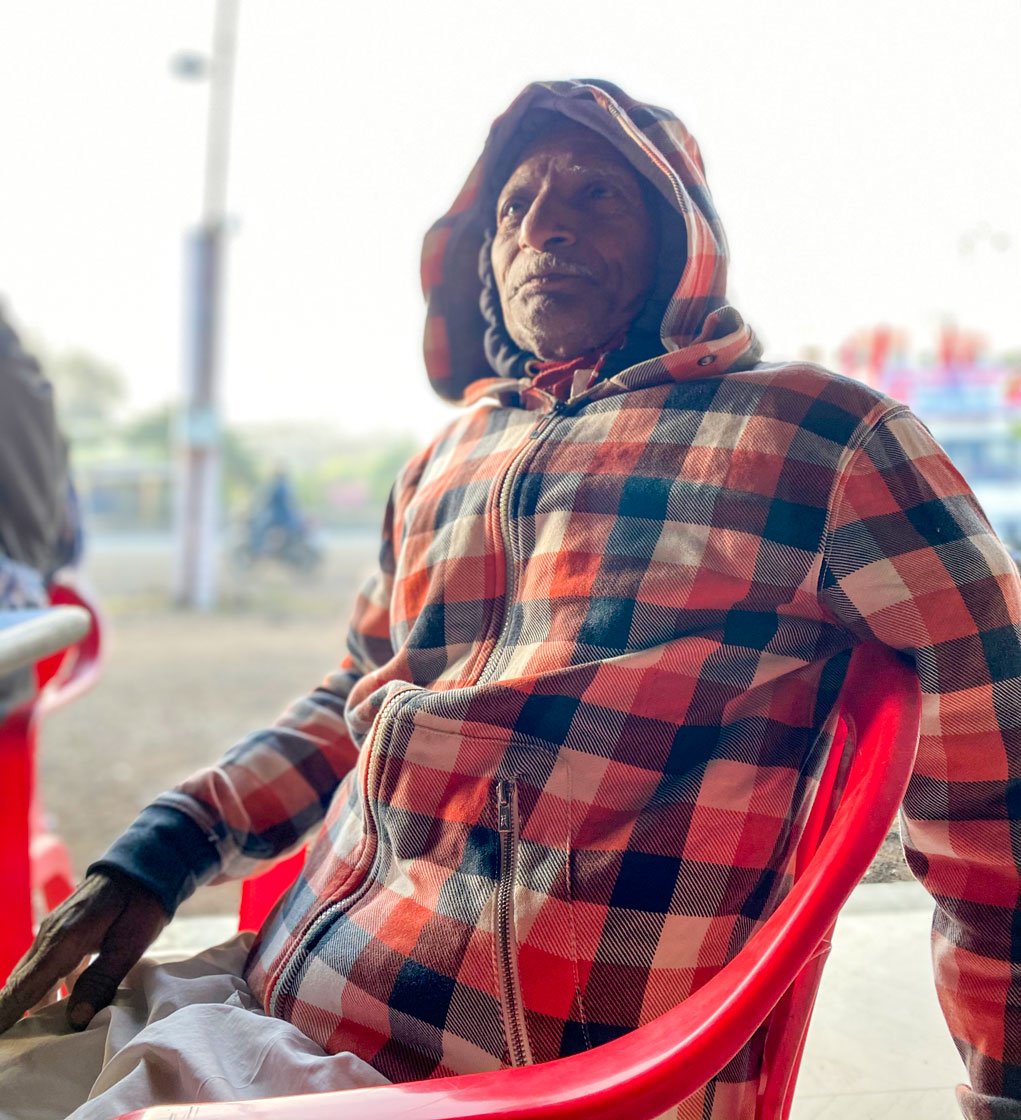 Narayan Gaikwad, 72, of Jambhali village in Shirol taluka of Kolhapur district, says “Until there is a revolution, farmers will not prosper." He owns three acres of land where he grows sugarcane. “We are going to Delhi not only for our Punjab farmers but also to protest against the new laws,” he adds. “In our village we need a lot of water for the sugarcane farms, but the electricity supply is only for eight hours.” On four days of the week the village has electricity during the day, and for three days at night. “It gets very difficult in winter to water the sugarcane fields at night and we are unable to cultivate,” Gaikwad says. 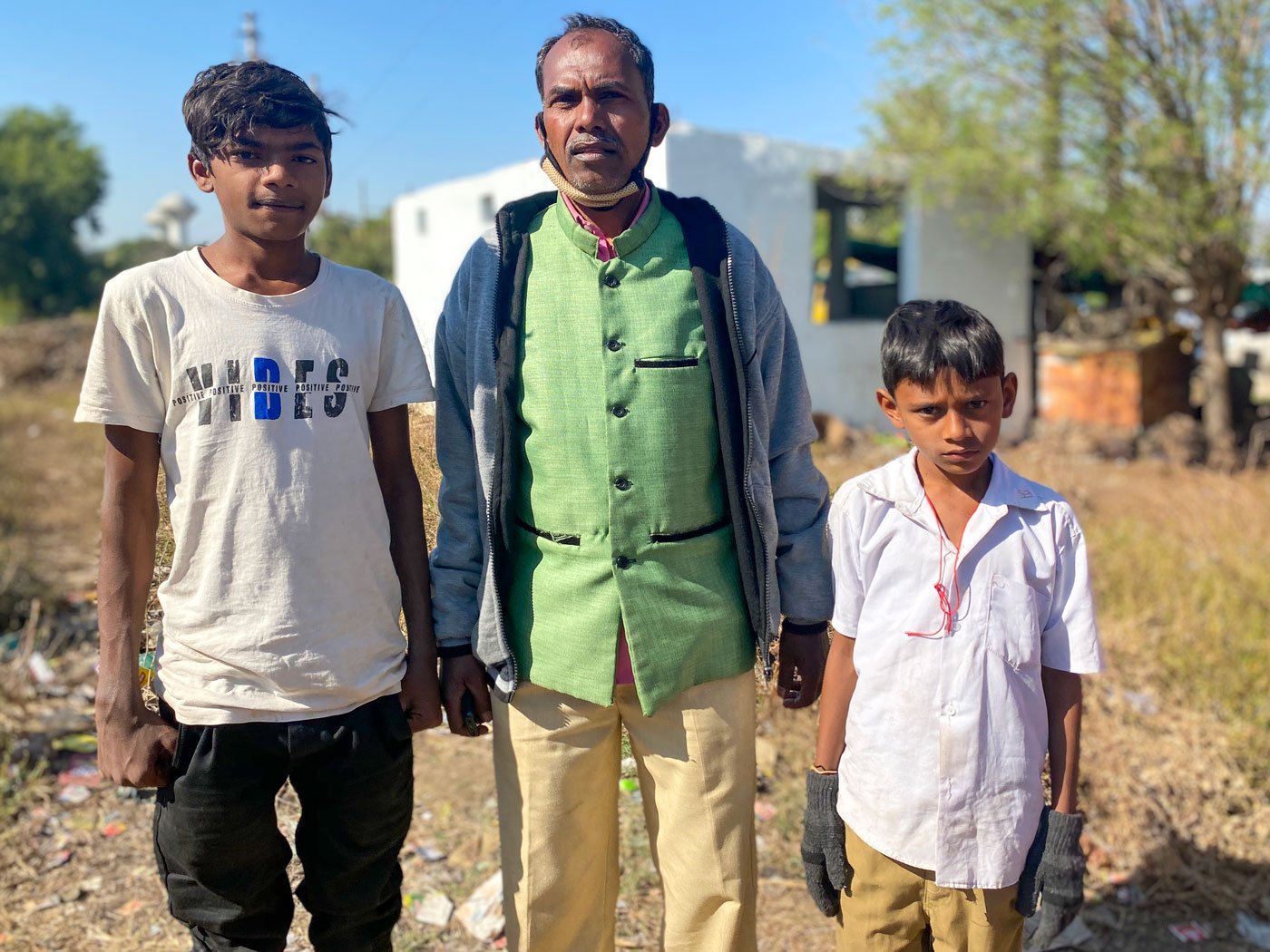 “Just like the East India Company enslaved us, Modi sarkar too treats its own farmers like slaves. They only want Adani and Ambani to make profits. Look at the condition of us Adivasis. I have brought my children today so that they can learn how farmers are treated in this country. Coming here is an important lesson for them,” says  60-year-old Shamsing Padvi, who is from the Bhil community. His sons Shankar, 16, and Bhagat, 11, are among the 27 people who have joined the vehicle jatha from Dhanpur village in Nandurbar district. 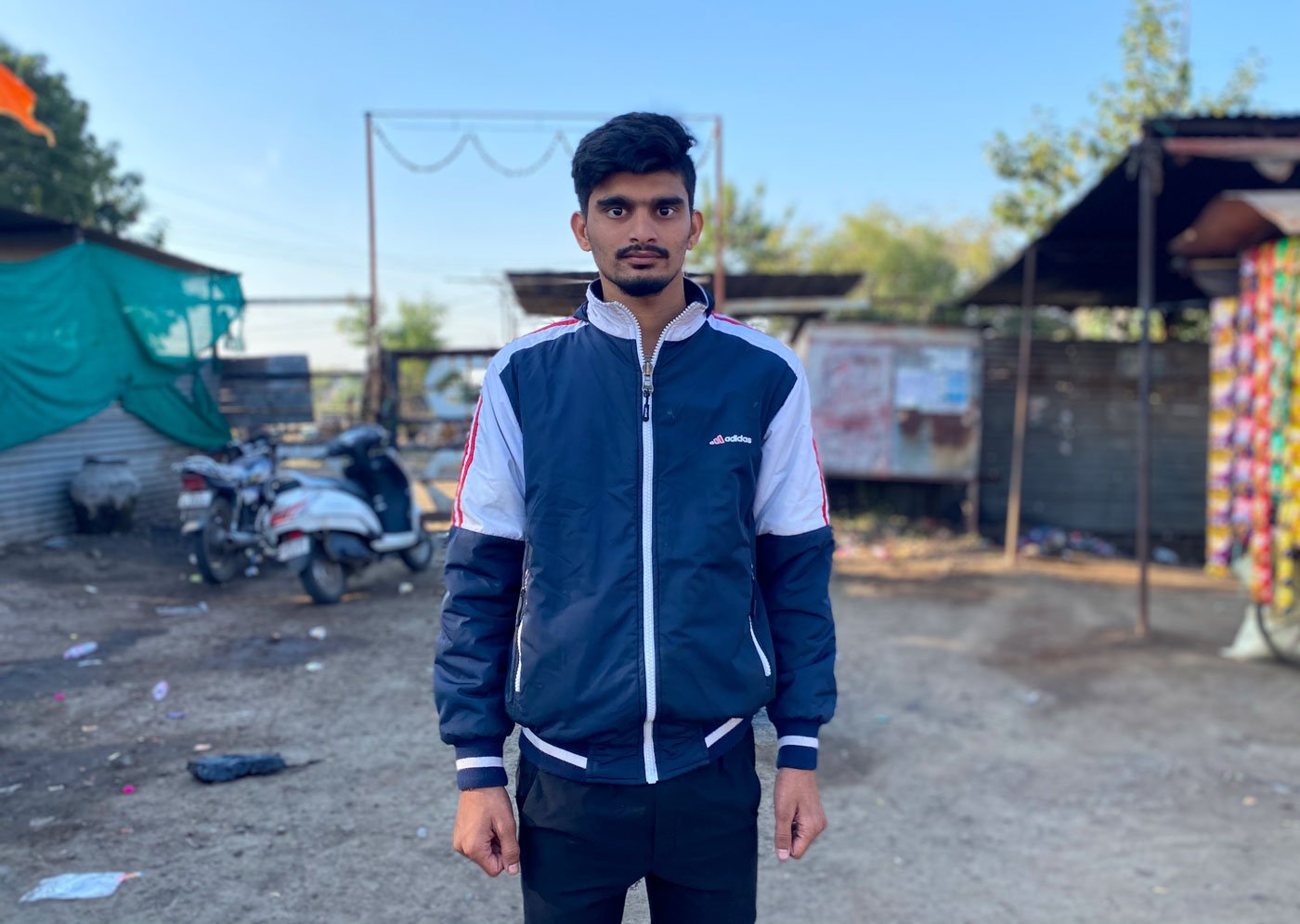 Sanskar Pagariya joined the first farmers’ protest in his village in Surgana taluka in Nashik district when he was 10 years old. Since then, he has been part of several protests across Maharashtra, including the Long March from Nashik to Mumbai in March 2018. Sanskar’s joint family of 19 people owns around 13-14 acres, which they give out to sharecroppers. “I will be standing wherever the farmers protest. Even if it gets me in jail, I will go to jail,” says the 19-year-old. Sanskar is waiting to complete his Class 12 exams, postponed due to the pandemic and lockdown. 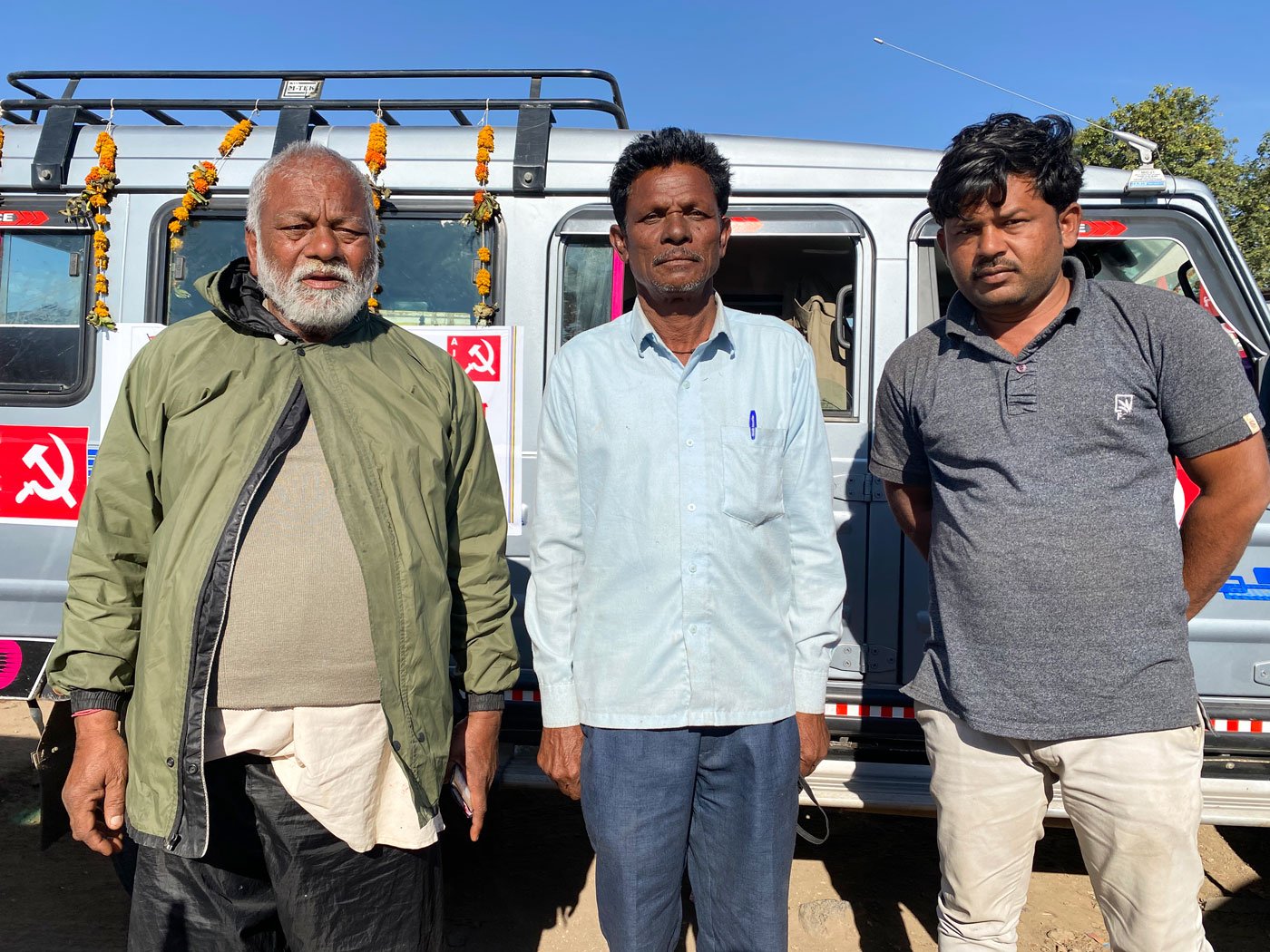 On December 21, around 100 farmers from Nanded district joined the protesters marching from Nashik to Delhi. Among them was Namdeo Shedmake, a Gond Adivasi from the district’s Bhilgaon village. He owns five acres of land, and cultivates cotton and soybeans. The 49-year-old farmer (middle, in blue shirt) says, “We are going to Delhi to win our fight against this anti-farmer government. Our village is on the hillside and there is no water for our fields. We have been asking for the construction of borewells for many years. Without water we cannot cultivate and we Adivasis are already in debt.” 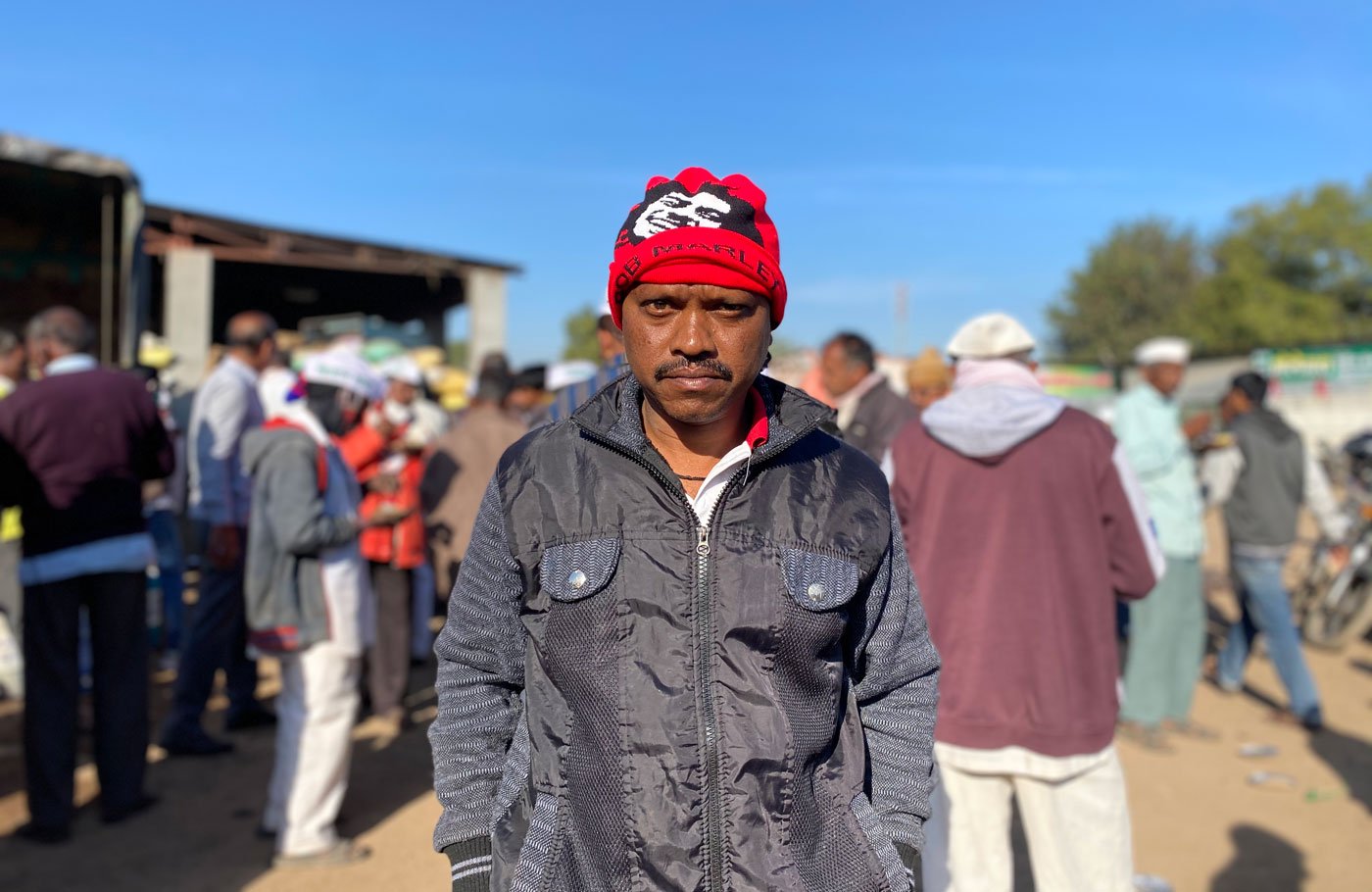 “The hospital conditions are so bad here that once a woman had to deliver in an autorickshaw. We have to travel 40-50 kilometres in case of emergencies. If you go to any PHC near our villages you will not see any doctors inside and that’s why many children here die in their mother’s womb only,” says 47-year-old Kiran Gahala from Palghar’s Dadade village. He owns five acres of land and cultivates mainly paddy, bajra, wheat and millets Around 500 Adivasi farmers from Palghar district have joined the vehicle march from Nashik to Delhi. 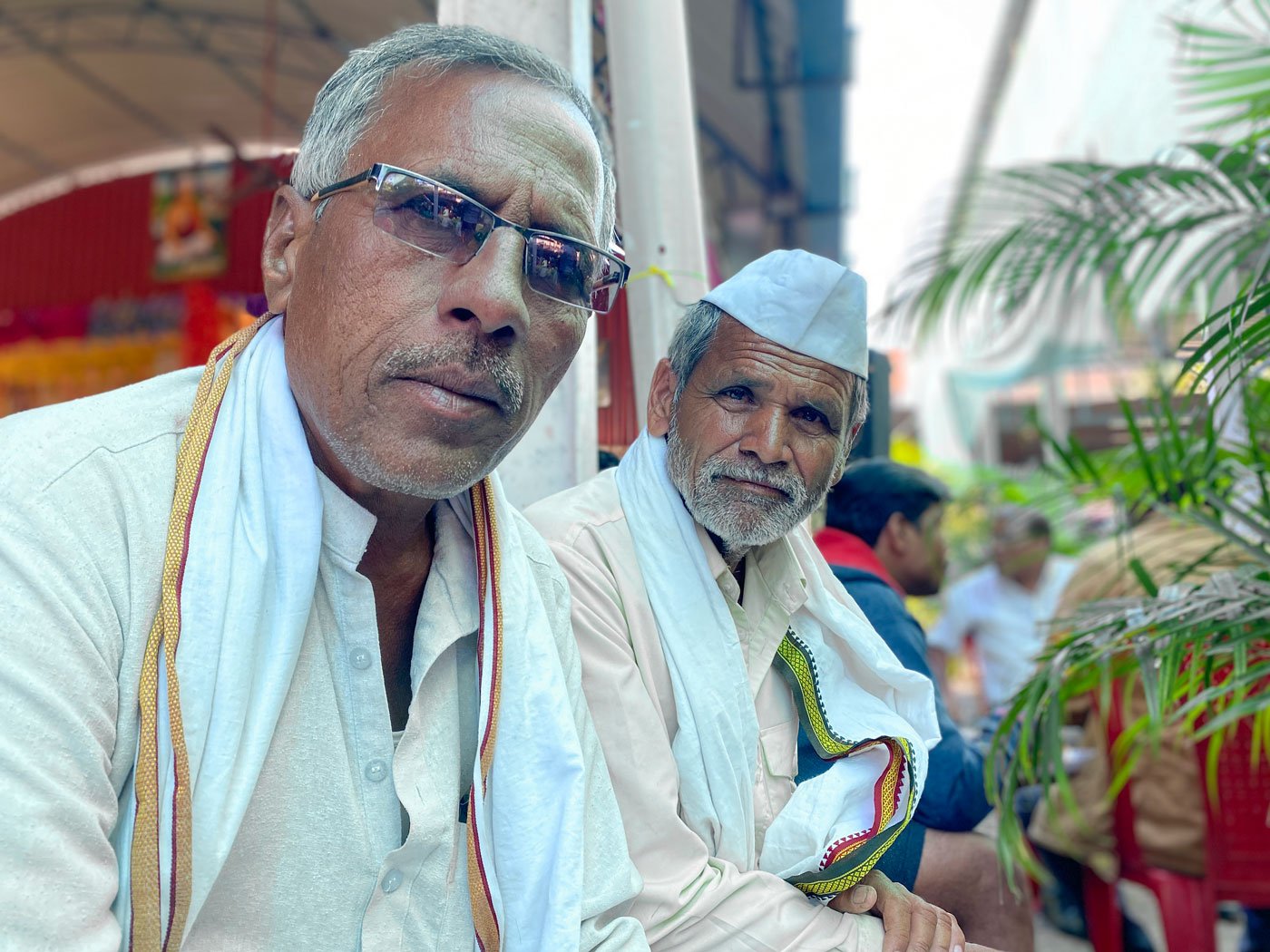 Vishnu Chavan, 63, owns 3.5 acres of land in Parbhani district’s Khavne Pimpri village. He is here with 65-year-old Kashinath Chauhan (right). “We went to the Long March together in 2018 and now we have come here again to this protest,” says Vishnu, who mainly cultivates cotton and soybean. “When will our concerns be taken seriously? People in our village have to walk five kilometres just for drinking water every day. Even when we cultivate anything in our lands, the wild animals destroy it at night. Nobody has done anything  for us. We want to be heard.” 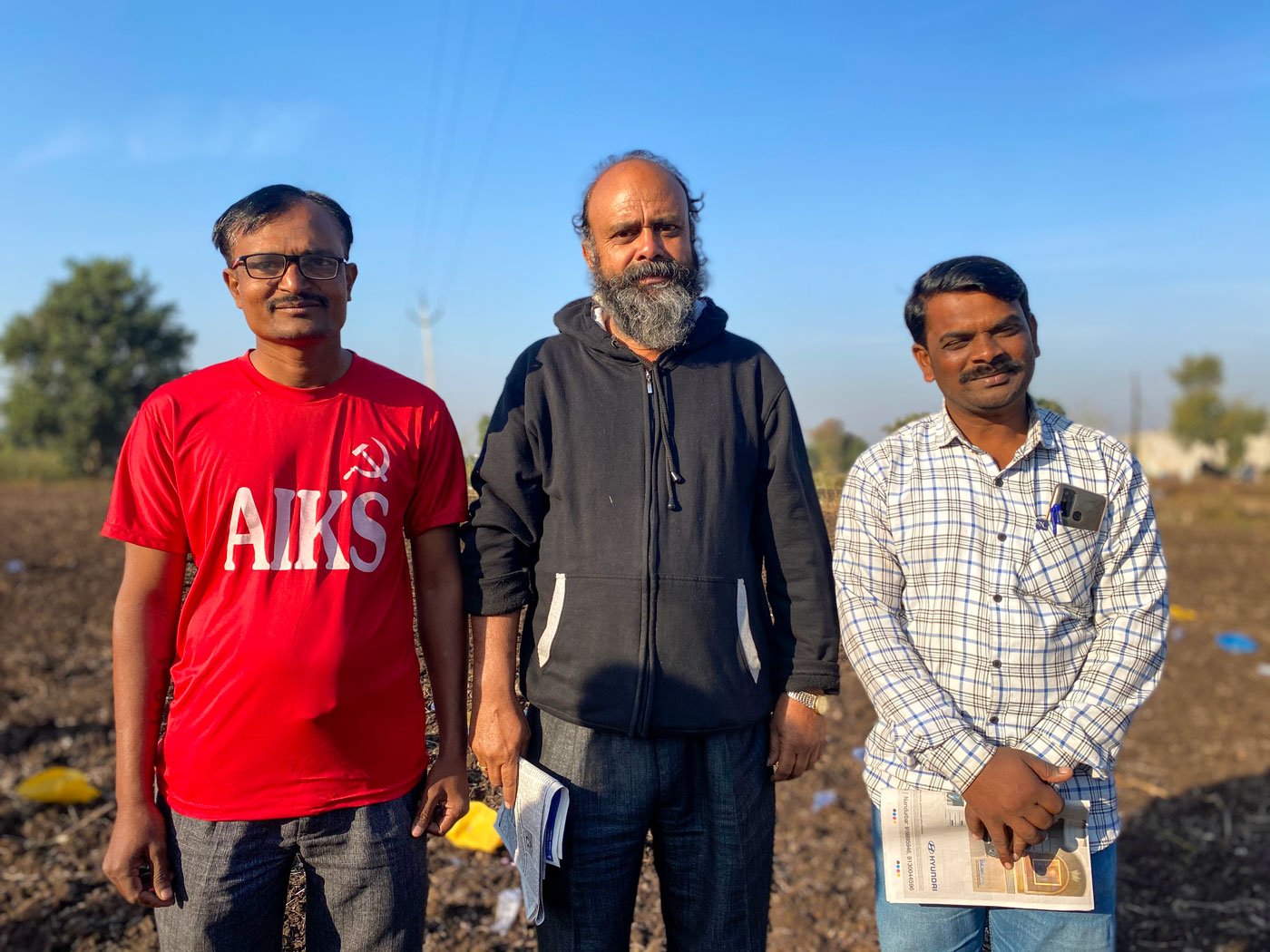 “Our demand is that the government take back the three laws. We will sit there indefinitely. There are many small farmers in our taluka . They work in sugarcane fields and survive on daily wages. Most of them have only own 1-2 acres of land. Many of them wanted to join the protest but it's the harvest season, so they stayed back,” says the 38-year-old Digambar Kamble (in red t-shirt) from Sangli district’s Shirdhon village. 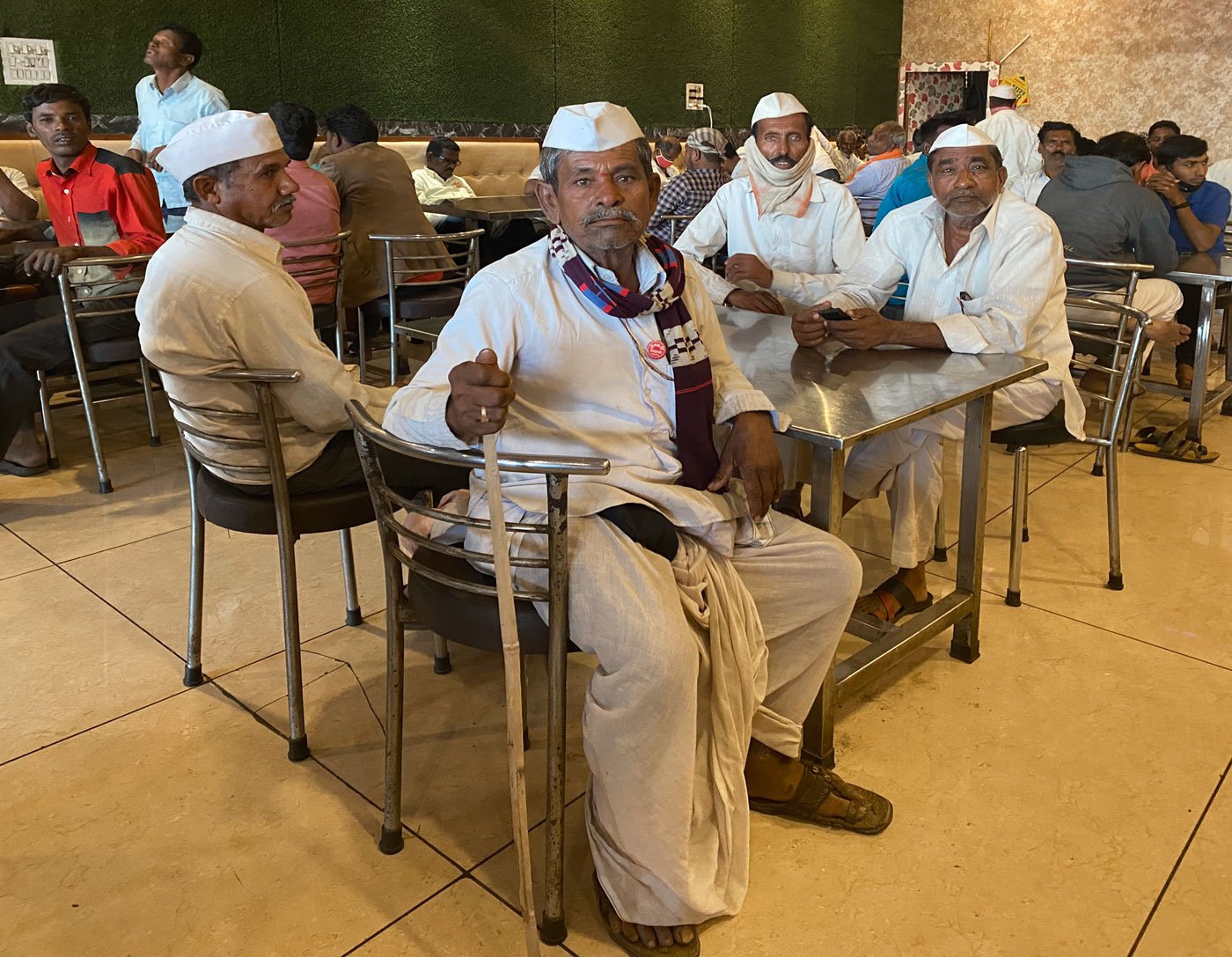 Tukaram Shetsandi, 70, is one of the older farmers in the vehicle jatha heading towards Delhi. His four acres in Solapur’s Kandalgaon village remain barren. Over the past 10 years. his debt has grown to Rs. 7 lakhs, loans taken from several big farmers for cultivating sugarcane. “I had bad harvests and then I was caught in debt, in repaying one loan after another. I am paying loans on 24 per cent interest rate. Do you think it’s fair? Where will a poor farmer like me bring money from?”