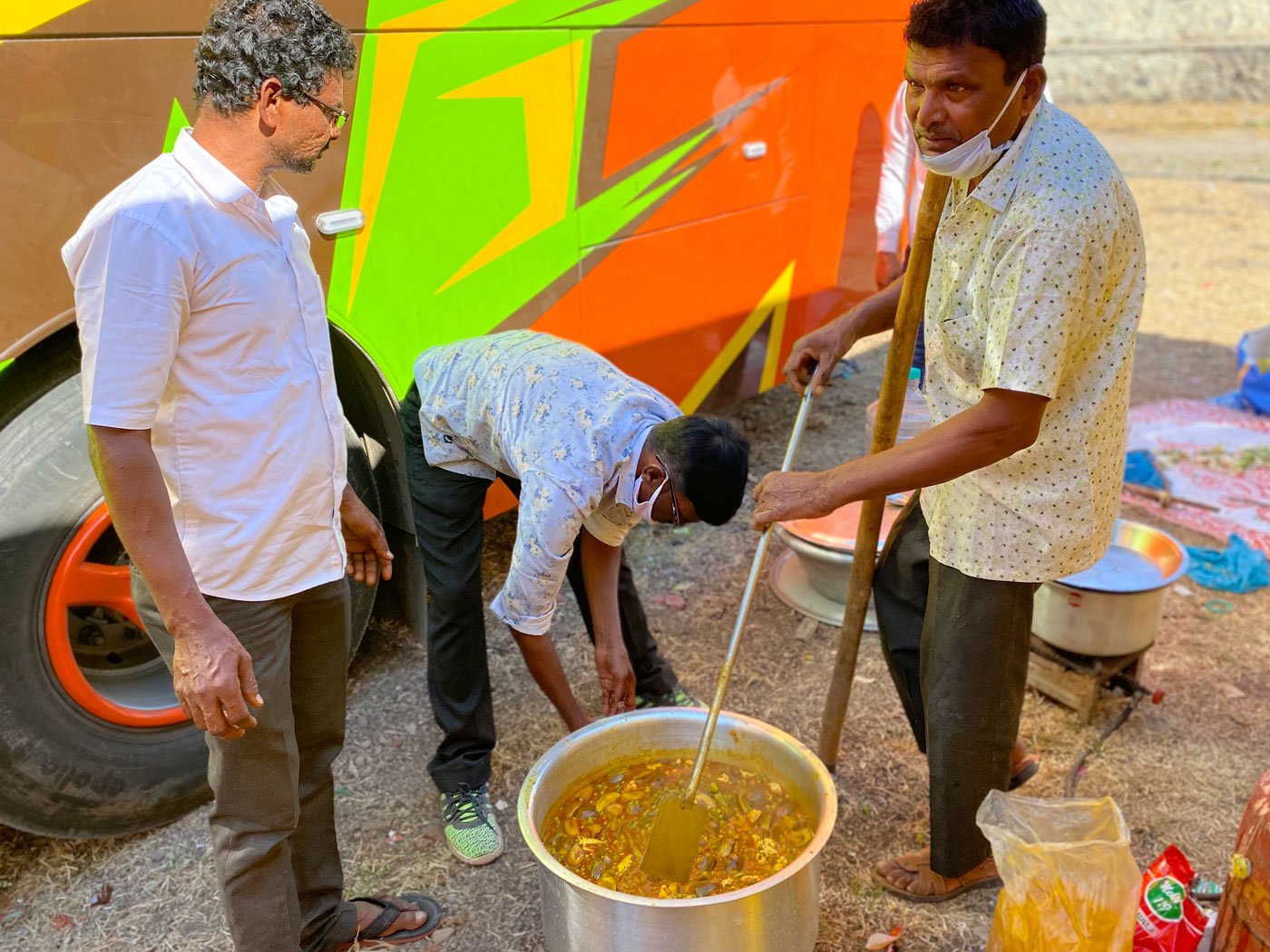 Despite a bad leg, fisherman Prakash Bhagat is cooking for the people from his village, Pargaon, at the ongoing vehicle morcha from Nashik to Delhi to support those protesting against the farm bills

Prakash Bhagat bends over a large aluminium vessel and stirs the aloo-mutter gravy with a ladle. He puts his weight on the left foot, the right one suspended in the air, using a wooden stick to balance himself.

“I think I have been walking with a stick since I was 10,” says 52-year-old Bhagat. “I used to walk holding my leg ever since I was a kid. My parents tell me I pulled a nerve.”

The disability has not impacted Bhagat’s resolve. When many in Pargaon, his village in Panvel taluka of Maharashtra’s Raigad district, decided to participate in a jatha , a march of vehicles going to Delhi, he did not think twice before joining in. “I am here for a reason,” he says, tasting the gravy approvingly.

In Delhi, tens of thousands of farmers are protesting at three different sites along the borders of the national capital against the three farm laws pushed through by the central government in September this year. To express their support and solidarity with the protesting farmers, on December 21, about 2,000 farmers from Maharashtra assembled in Nashik to participate in the jatha going all the way to Delhi, roughly 1,400 kilometres away.

From Pargaon village, 39 decided to join in as well. “The farmers of this country are being cheated,” says Bhagat. “More and more of them should get assured rates for their produce. These farm laws will push them deeper into debt. Farmers will be placed in the custody of the large companies, who will exploit them. The farm laws may be immediately hurting farmers from Punjab and Haryana, and that is why the agitation is dominated by them, but that does not mean farmers across the country will not be affected.” 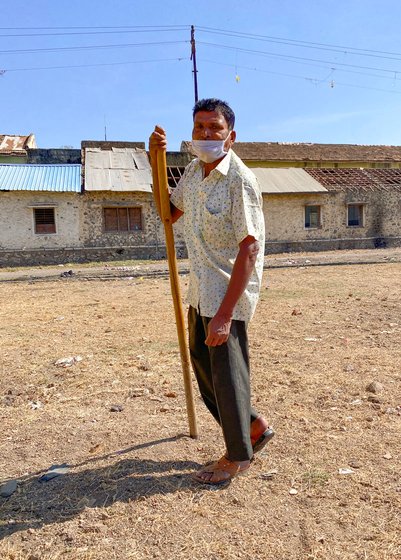 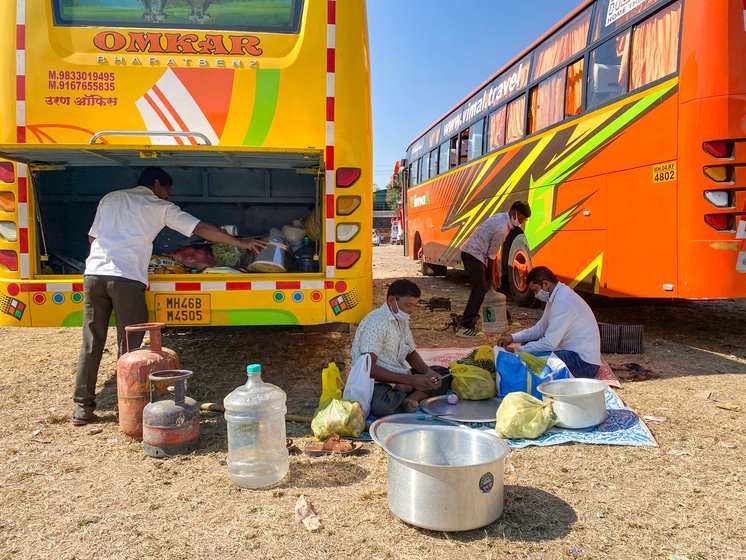 The bus is stacked with onions, potatoes and rice, among other items. When activists leading the march stop, Bhagat and his colleagues get to work

Bhagat himself is a fisherman. “Why do I have to be a farmer to support farmers?” he asks. “Most people do not realise that agriculture drives the rural economy. If farmers are struggling, who will buy my fish?”

Bhagat catches crabs and prawns, and sells them in the market at Panvel, making about Rs. 5,000 a month. “I do not have a big, automatic boat,” he says. “I manually manoeuvre it when I go fishing. Other fishermen stand and throw the bait. I cannot balance myself in the boat because of my problem. So I have to sit and fish.”

Even though he is a fisherman, it’s mutton that Bhagat most likes to cook. “The gaothi [village style] one,” he clarifies. “I have always loved to cook,” he adds. “I make a variety of dishes for weddings in my village. I do not charge a paisa. I do it out of love. If someone outside the village wants me to cook at an event or a festival, I only ask them to arrange for my travel. So when people in my village finalised the plan to join this morcha , I offered to cook for them.” During this protest march, he’s been cooking meals for around 40 people.

The residents of Pargaon have hired a bus to participate in the jatha , which has been mobilised by the All India Kisan Sabha, affiliated with the Communist Party of India (Marxist). The orange-coloured, bulky bus stands out amid a caravan mainly of tempos and four-wheelers. The boot of the bus is stacked with six kilos of onions, 10 kilos of potatoes, five kilos of tomatoes and 50 kilos of rice, among other items. The moment the activists leading the march stop for a rally, Bhagat and his two colleagues get to work. 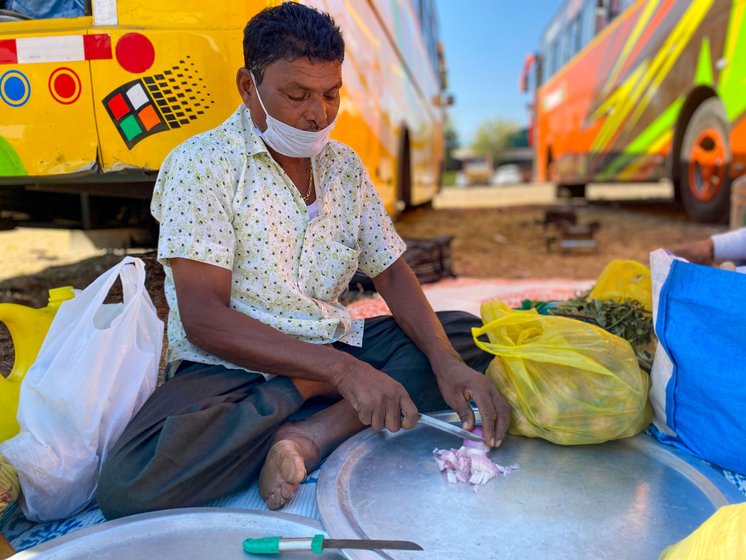 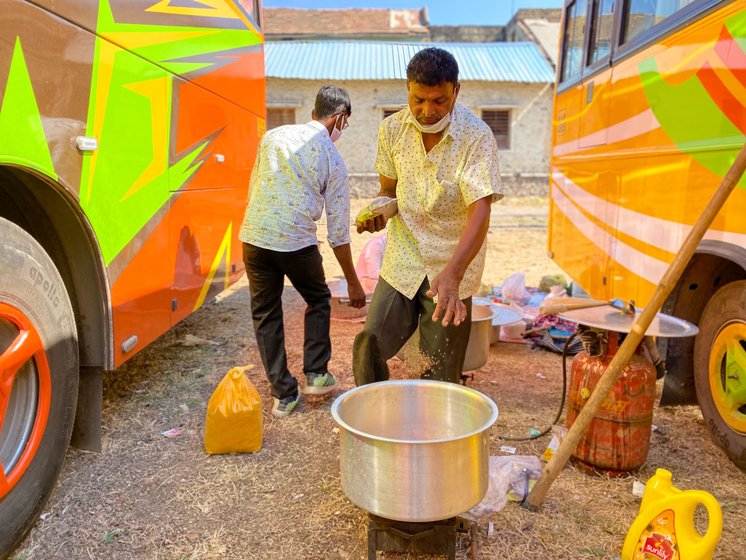 'I have always loved to cook....So when people in my village finalised the plan to join the march, I offered to cook for them'

Bhagat grabs his wooden stick and moves towards the ‘storeroom’ of the bus. One of his colleagues takes out the items required for the meal, including a very heavy gas cylinder. On the afternoon of December 22 in the town of Malegaon, the lunch menu is rice with aloo-mutter. “We have enough supply for three days,” Bhagat says, adjusting himself on a bedsheet on the ground next to the bus, speaking to us while expertly chopping onions. “Most of us will return home from the Madhya Pradesh border. Some will go up to Delhi. We cannot stay away from work for a long time.”

Most of the residents of his village, Pargaon, belong to the Koli community, and depend on fishing for a livelihood. “We go to the sea for 15 days a month. We cannot fish during low tide,” says Bhagat. On Friday or Saturday this week, he wants to return to Pargaon in time for the high tide. “We cannot afford to miss that,” he adds. “We have suffered a lot since the lockdown. We stopped fishing for our own safety. We did not want to catch the coronavirus. And the police would not allow us to sell in the market either. We are slowly getting back on our feet now. We cannot afford another break.”

During the initial stages of the lockdown, the residents of Pargaon had sealed off their village entirely. “We did not open up even after the state relaxed some restrictions,” says Bhagat. “Nobody even let their relatives enter the village to stay safe from the virus.”

From a village that did not let anyone breach its boundaries during the lockdown, 39 have joined a march of thousands, along with farmers from different parts of the state. “You don’t think twice before supporting farmers,” says Bhagat.