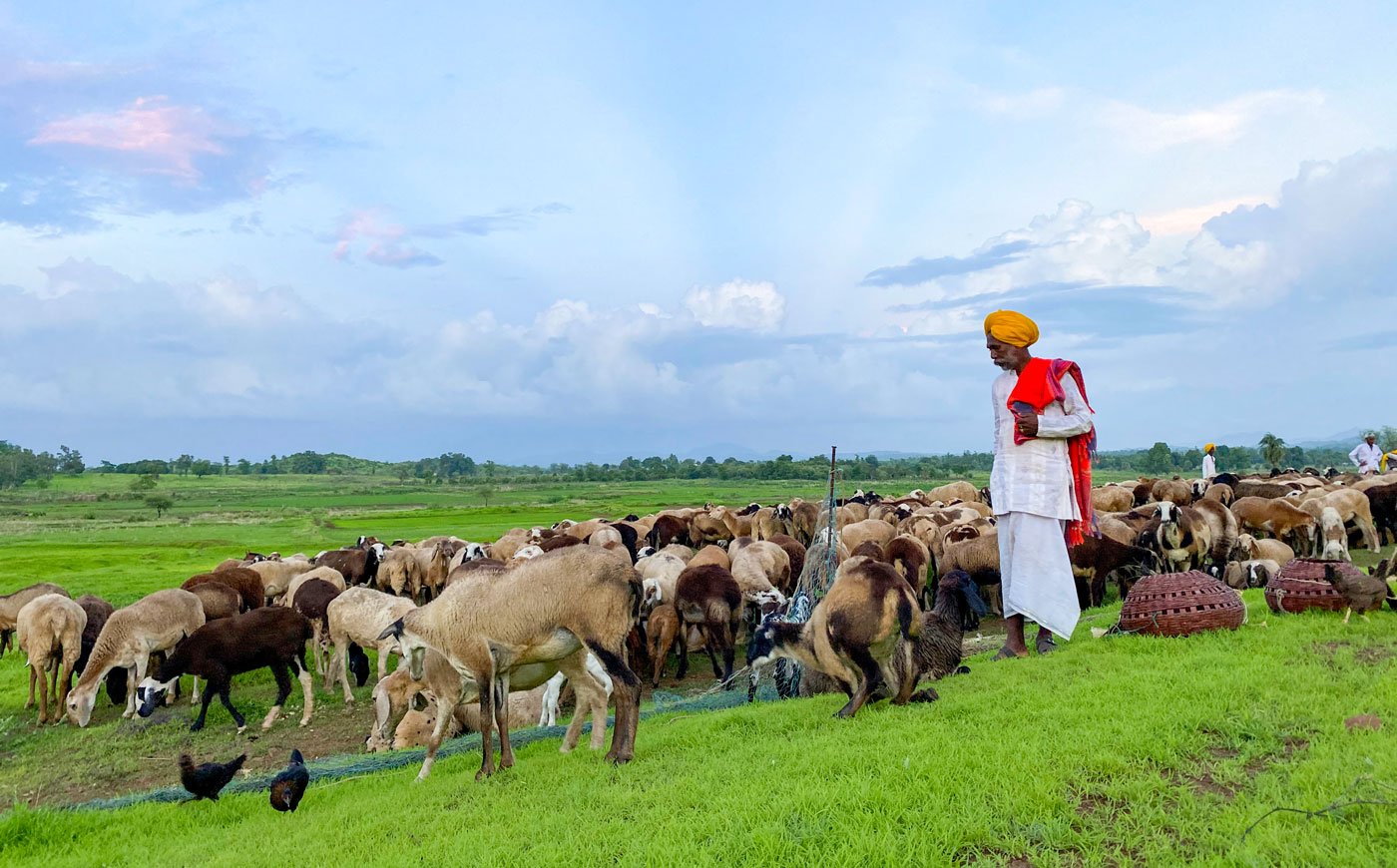 ‘We don’t have a home to stay at home’

For this group of nomadic pastoralist Dhangar families in Maharashtra, the lockdown brought a drop in sales of sheep, restricted access to village grounds, and depleted rations – but they have tried to move on

“It’s 350 rupees. Don’t reduce the price, we are already not earning anything due to corona,” said Prakash Kokre, while a buyer tried to bargain. He picked up a white male lamb and put it on a weighing scale placed on the ground. “ Teen kilo [three kilos],” he announced to the two customers who insisted on Rs. 200 per kilogram. “That’s too low, but I need the money,” said Prakash, as he gave the animal to its new owners.

“Let it go now, what can we do?” he told me, when I met his family that afternoon in the last week of June in an open field in Desaipada, a hamlet in Vada taluka . It was three months into the Covid-19 lockdown.

Prakash’s family, along with six other families, all nomadic pastoralists from the Dhangar community, had halted in that field in Palghar district of Maharashtra for two days. A few women were setting up nylon netting to keep the younger animals from straying. Sacks full of grains, aluminum pots, plastic buckets and other items were strewn around the field. Some children were playing with lambs.

Selling lambs, sheep and goats – like the one that Prakash had just sent off at a bargain price – is the main source of sustenance for this group of Dhangars. The seven families own around 500 animals, including 20 horses. They rear the sheep and sell them for cash or grains. The goats are usually kept for their milk for the families’ own use, and occasionally sold to meat traders. At times, their animals graze on farmlands, and in exchange for their manure the landowner gives the families food, water and a place to stay for a few days.

“We only sell the mendha [male sheep] and keep the female sheep,” said 55-year-old Prakash, the head of this group of pastoralists. “Farmers buy sheep from us because they are useful in grazing their lands. Their manure makes the soil fertile.” 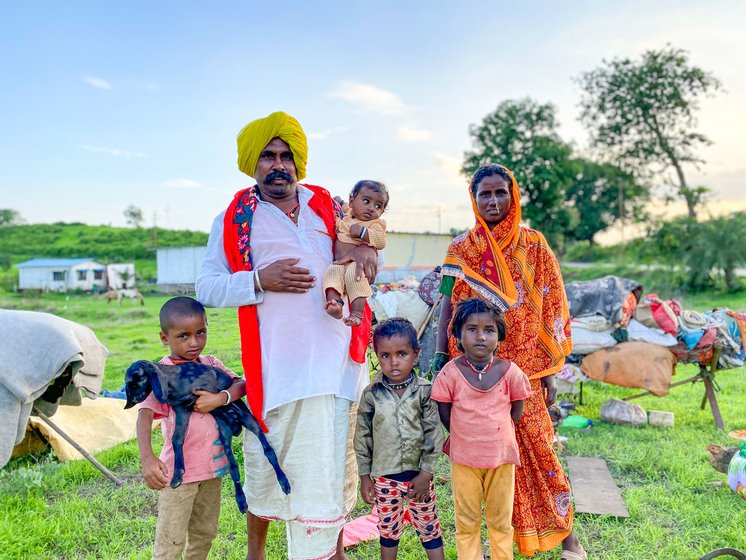 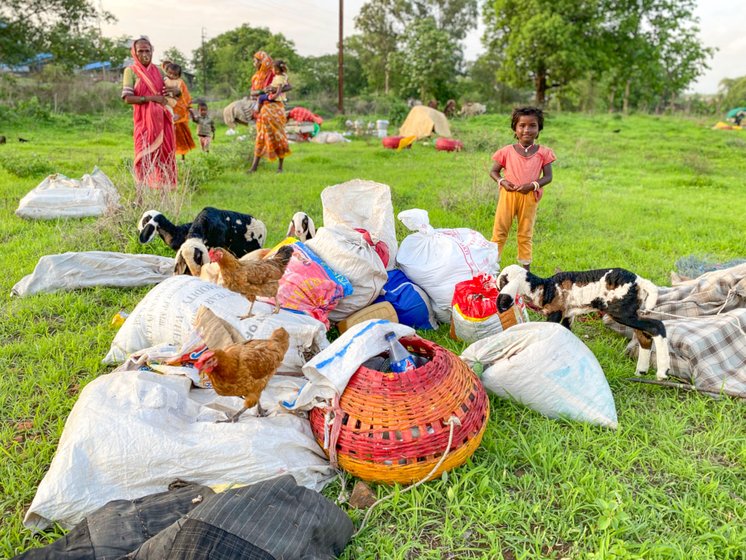 In June, Prakash’s family – including his daughter Manisha, and grandchildren (left) – and others from this group of Dhangars had halted in Maharashtra's Vada taluka

These seven families from the Dhangar community – listed as a Nomadic Tribe in Maharashtra – start their annual journey after the kharif harvest, around November. (There are roughly 3.6 million Dhangars in India – besides Maharashtra, mainly in Bihar, Chhattisgarh, Jharkhand, Madhya Pradesh, Odisha and West Bengal.)

Once on the road, the seven families – roughly 40 people – halt for around a month sometimes in each village, where they usually move from field to field every 2-3 days, putting up tarpaulin sheets for shelter. While on the road, away from villages, they usually stay in forested areas.

Prakash and the others with him are originally from Dhavalpuri village in Ahmadnagar district. But their annual migrations across the state stops by June in Nashik district, where they spend the monsoon months in different villages, staying in makeshift huts built on barren fields.

But after the Covid-19 lockdown began on March 25, moving across their usual routes became uphill for the Kokre clan. “We walk nearly 30 kilometres every day, but during this lockdown people stopped allowing us to stay in their lands,” said Prakash.

Before they arrived in Vada taluka , the families had halted in a field in Palghar's Vangaon village – around 55 kilometres from Vada – for 40 days, waiting for the lockdown to ease. By June, when it became easier to move, they started out again. "We had to move because of our animals, so the police didn't bother us,” Prakash said. “People also wanted us to leave their villages. " 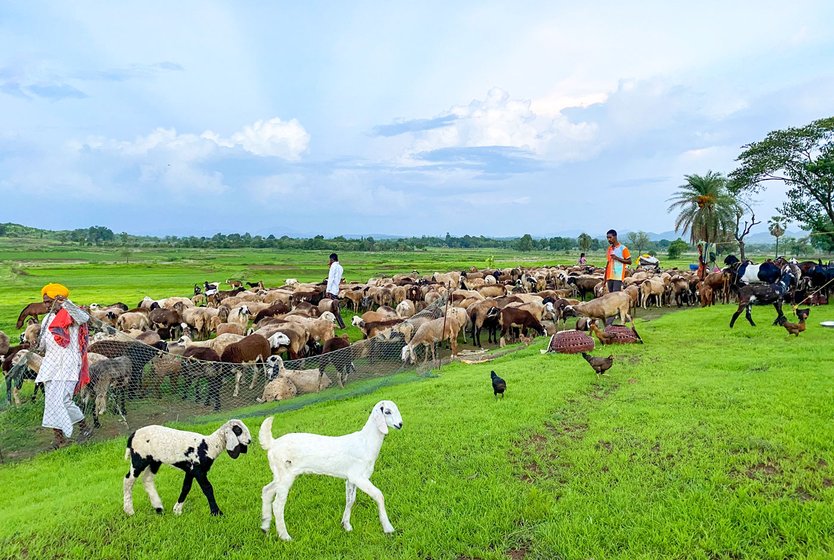 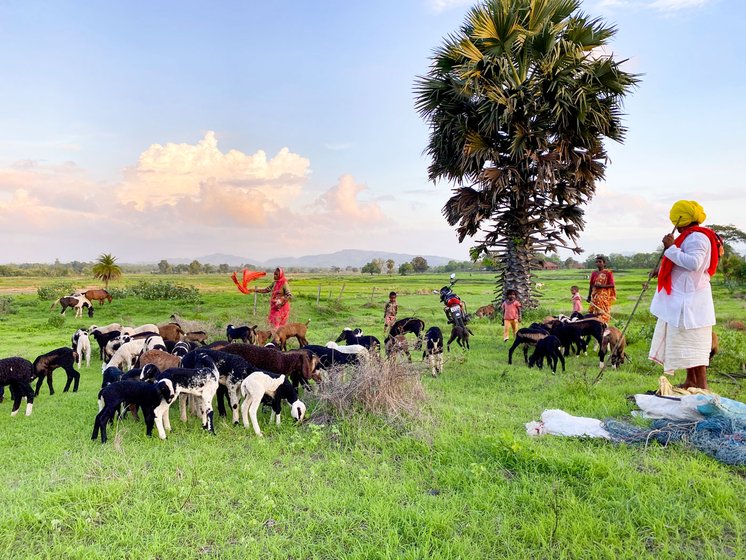 Selling lambs, sheep and goats is the main source of sustenance for the Dhangar families, headed by Prakash (right image) – with his wife Jayshree (left) and niece Zai

He recalls an incident in April when some residents of Vangaon shouted at his family. “They said we are risking lives by coming to their lands and told us to stay at home. But this is how we have always lived. My father and his father, all of us, wandered with our animals. We have never stayed in just one place. We don’t have a home to stay at home.”

However, the lockdown made them wish they did have a settled home. “It made things difficult for us,” Prakash added. “It would have been easier to have one home…”

During the lockdown, with barely any transportation options, the Dhangar families faced other battles too. Medical facilities are not easily accessible to the pastoralists even at other times  because they are on the move or often stay in areas with poor connectivity. In mid-June, Prakash said, “We lost my brother's daughter and her child. She was pregnant.”

Suman Kokre had gone to fetch water from a nearby tap when a snake bit her. She was found by some members of the group. They called for a private vehicle when they couldn't find an autorickshaw. Hospitals in Palghar refused to admit her due to their Covid-19 caseloads. “We spent hours taking her from one hospital to another, but nobody took us. At night, we started to go to Ulhasnagar [around 100 kilometres away] but she died on the way. The hospital there gave us her body after two days,” said Prakash.

“My sons [aged 3 and 4] ask me where their aai has gone,” said Suman’s husband, 30-year-old Santosh. “What should I tell them? My [unborn] child and wife are dead. How do I tell them?” 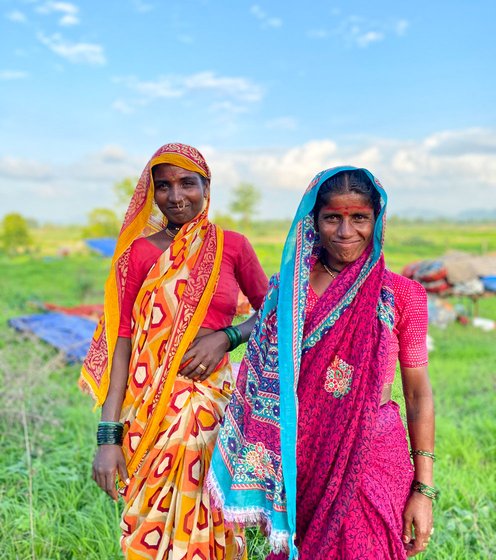 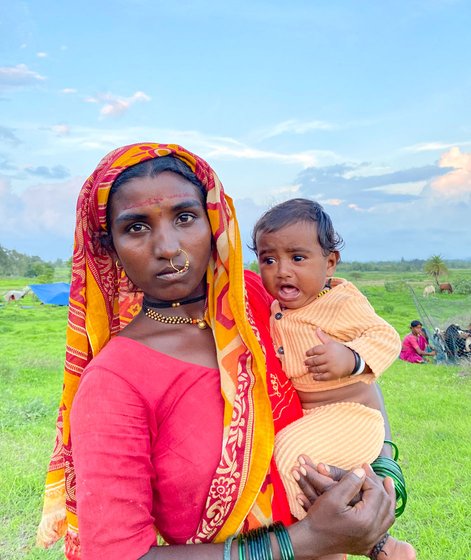 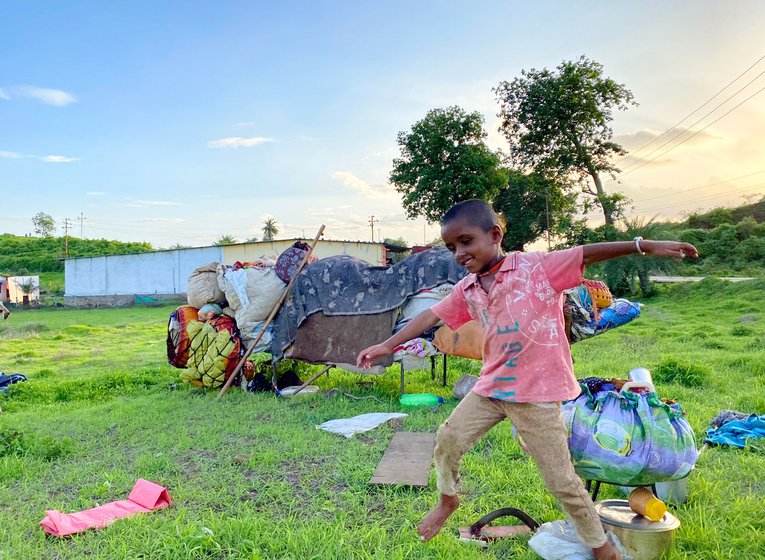 'We will take care of ourselves, but our sheep need fodder and water', says Zai Kokre (left and centre), with her aunt Jagan, her son (centre) and others from her family

The pastoralists know about the precautions to be taken in the pandemic, but are not always in touch with news and other information because of the poor mobile networks in forested areas. "We listen to the radio,” Zai Kokre told me. “They told us to wash hands and wear masks. When we go to villages, we cover our faces with our padar [saree pallu ]."

That day, during their halt in Palghar, 23-year-old Zai, Prakash’s niece, was cooking jowar bhakri over a wood fire on a makeshift stone chulha , while her one-year-old son Danesh played nearby. “We don’t mind eating one-time meals, but please just take care of our animals,” she said, referring to the incident when people Vangaon asked the Dhangars to leave. “If you give us one place where our sheep can survive, we will happily live there. Even if that place is in a forest. We will take care of ourselves, but our sheep need fodder and water.”

Before the lockdown, the seven families together could sell around 5-6 sheep in a week – though at times it was even just one animal sold in a week– and, says Prakash, sometimes well-off farmers would purchase livestock from them in bulk. They usually also sold some 15 goats every month, and maintained collective earnings as well as expenses. “We are all one family, we live together,” Prakash said.

During the lockdown, these sales dropped – Prakash does not recall by how much, but says they managed with their savings – though rice that cost Rs. 50 a kilo was available for Rs. 90, and the price of wheat shot up from Rs. 30 a kilo to Rs 60. “All the shops here [in Vada] are looting us,” Zai said. “They sell us grains at much higher prices. Now we have to save our rations till our next stop. We eat only one meal a day nowadays.”


The families say they also received some rations from the government. “We got only 20 kilos of rice for seven families [from the Ahmadnagar authorities],” said Prakash. “You tell me, will 20 kilos be enough for so many of us? In our village [Dhavalpuri, which the families occasionally visit] we can buy rations at a lower price [on PDS], but in other places we have to buy at full price…” 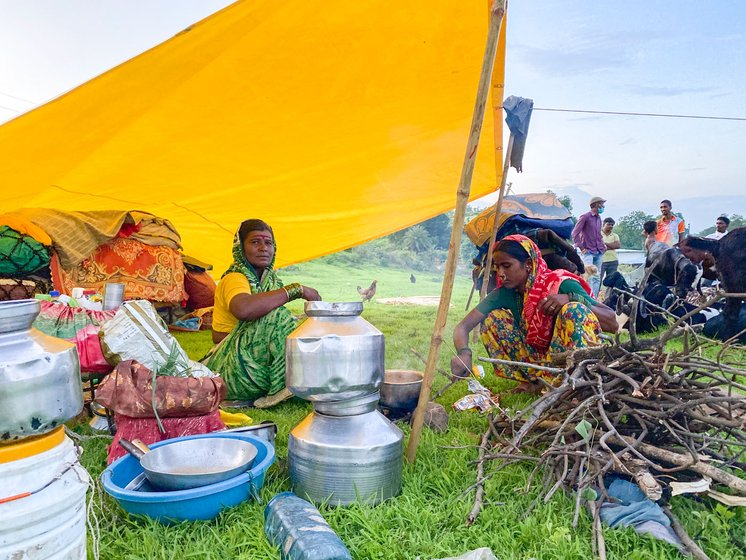 While travelling, this group – which includes Gangadhar (left) and Ratan Kurhade – carries enough rations on their horses to last nearly a month

While travelling, the group of families carry enough rations on their horses at a time to last nearly a month. “Sometimes, while staying in forests the oil gets over soon or sometimes rice finishes in 15 days only. We have to then travel back to nearby villages and buy stocks,” said Prakash.

“And due to this disease [Covid-19], my children are also travelling with us. They should be in school studying,” added Jagan Kokre, 30, Prakash’s sister. Usually, only the little kids travel with their parents, while those over 6 to 8 years of age stay back in the residential schools (ashramshalas) at Dhavalpuri. Only during summers, when the schools are shut, the older kids too come along on the journeys. “My son is tending to sheep now,” Jagan said. “What could I have done? With the closing of ashramshalas due to corona, we had to bring him with us .”

Jagan’s two sons, Sunny and Parsad, study in Class 9 and 7 in Dhavalpuri; her six-year-old daughter Trupti is not in school yet and helps her mother in loading their belongings onto the horses. “We don’t want our children to wander like us from one place to another without proper shelter,” Jagan added. “It’s difficult to travel, but we do it for our animals.”

The seven families were preparing to move from Palghar when I met them at the end of June. “Our sheep won’t be able to survive the rains in these areas. The soil here is sticky and makes them sick,” Prakash had said. “So we have to go back to Nashik, the rainfall is less there.”

When we spoke on the phone recently, the pastoralists were travelling around in Sinnar taluka of Nashik district, along routes and rhythms they have followed for generations.