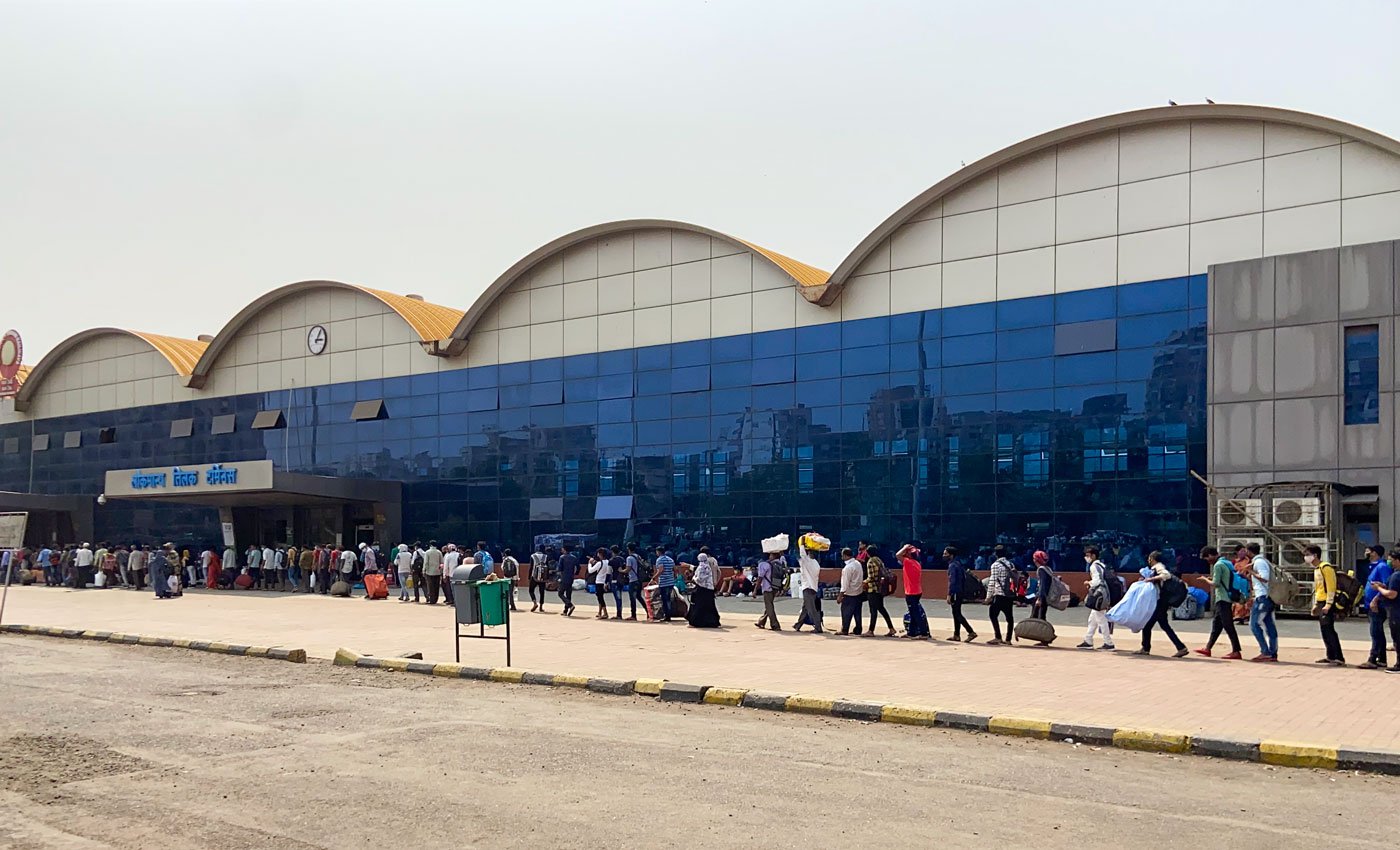 Trying to get onto that train somehow

Mohammed Shamim is returning to his UP village unable to handle wage loss twice in this pandemic year – like others in a second wave of migrants. Many in his north Mumbai slum colony have already left

“The agent is demanding Rs. 1,600 per ticket to get a confirmed seat. I have negotiated it down to Rs 1,400,” he adds. “If we get one seat, we’ll board and then pay whatever fine or penalty is charged.” The cheapest rail ticket from Mumbai to Uttar Pradesh is usually in the range of Rs. 380-Rs. 500. In UP, in Abboo Sarai village of Faizabad district’s Masodha block, Shamim’s two elder brothers work as farm labourers for land-owning families, a seasonal occupation

For 22-year-old Shamim and tens of thousands of migrant workers in Mumbai, this will be the second journey home within a span of around 10 months as the new restrictions introduced by the Maharashtra government to tackle the spread of Covid-19 prompt another round of factory closures, layoffs and suspension of work at construction sites.

Major railway stations in Mumbai, especially Bandra Terminus and Lokmanya Tilak Terminus, from where several trains leave for the northern states of Uttar Pradesh and Bihar, have seen large crowds since April 11-12 as migrant workers decided to leave before the fresh restrictions on work and movement began in the state on April 14. Many, fearful of further curbs, are still trying to leave.

Though the Shiv Sena-led state government has not called the curfew and restrictions another ‘lockdown’, Shamim shrugs at the terminology: “For us it is a second round of wage-loss. And it has hit already.” 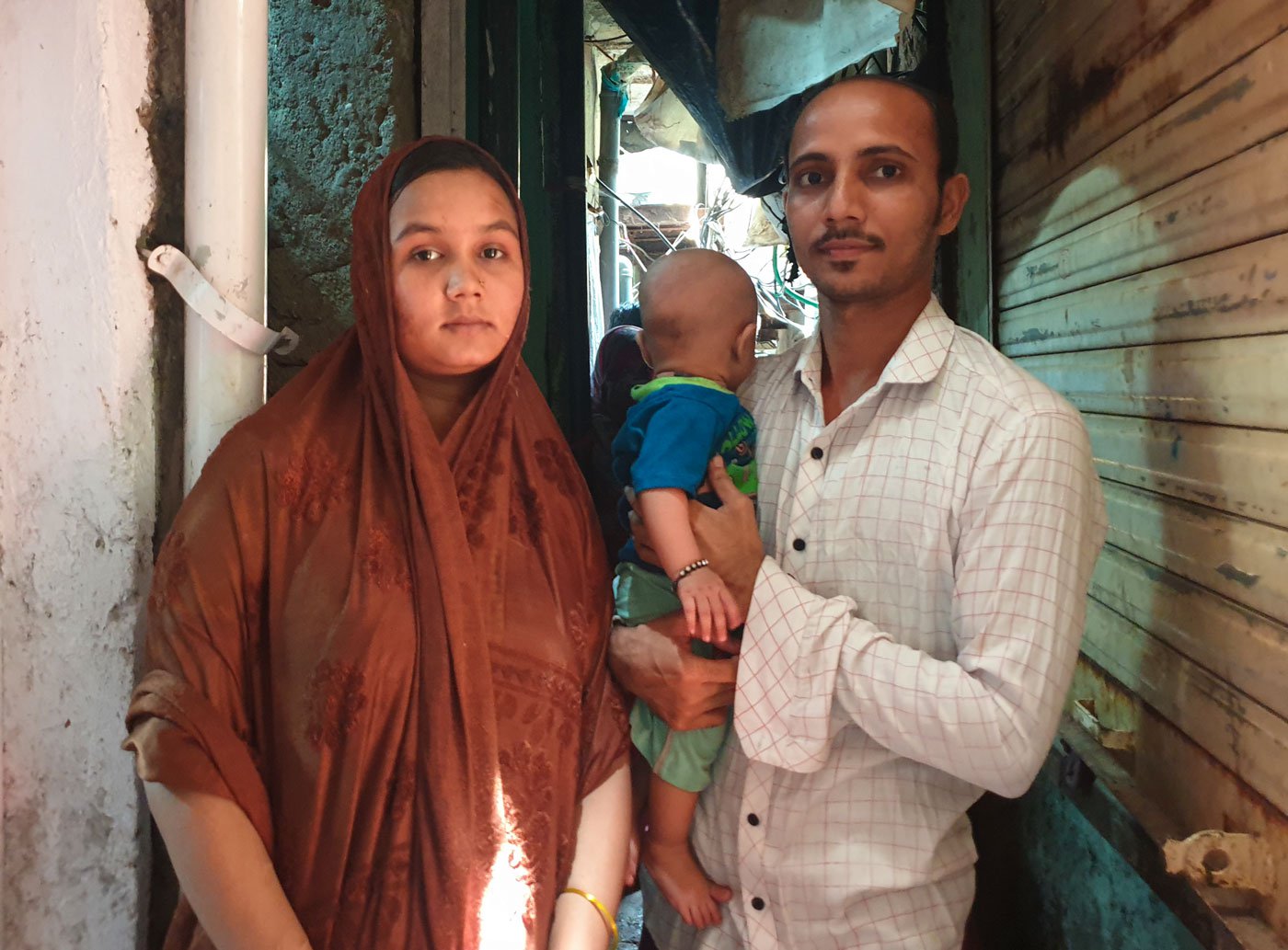 Mohammed Shamim, Gausiya and their son: 'If we get one seat, we’ll board and then pay whatever fine or penalty is charged'

The garments manufacturing unit where he works closed down on Tuesday, April 13. “The seth doesn’t think he can restart operations any time soon. He paid us our dues for 13 days,” Shamim says. That sum, a little less than Rs. 5,000, is all that he has. He spent Rs. 780 for two waitlisted tickets on a train going to Faizabad from Lokmanya Tilak Terminus and is now scouting for an agent who can guarantee a confirmed ticket. “Only last week, I paid Rs. 5,000 as one month’s advance rent to the landlord of this room, and now he’s refusing to return even a paisa even though we are going to vacate the place for the next few months.”

Last year, the family managed to leave Mumbai on board one of the ‘Shramik Special’ trains operated by the Railways for migrant workers stranded in the big cities when the lockdown was announced in March 2020.

At that time, when the automated message from the Railways finally pinged on Shamim’s phone to confirm their spots on a train to Uttar Pradesh, it was already the end of May. “We owe Rs. 10,000 in rent and payments for water and electricity [for the first two months of last year’s lockdown]. And I didn’t have work for four months, so that was Rs. 36,000 lost as wages,” he says. “ Ab paanch hazaar waste ho gaye . ” When every rupee counts, that pinches him terribly.

Shamim’s wife, 20-year-old Gausiya, is tired. Inside their 8x8 foot home in Nargis Dutt Nagar, a slum colony in Bandra in north Mumbai, little Ghulam Mustafa, her eight-month-old son, is a bundle of toothless smiles, happy to be picked up by strangers. He was not even a month old when they returned to Mumbai in August 2020 after the previous lockdown.“He’s been unwell for a couple of weeks, fever and a bad stomach. Maybe it’s just the heat,” she says. “And now we’re packing up to leave again. Koi chaara bhi nahin hai [We don’t have an option]. We’ll come back when things get better.”

The family is desperate for better days to arrive. When they returned to Mumbai in August last year, Shamim went back to his job packing shirts in a workshop in Santacruz West. But when an opportunity to earn an extra Rs. 1,000 emerged in February this year, he dropped that job he had worked at for the five years to join the tiny garments-manufacturing unit in Santacruz East. Here, the pay was Rs. 10,000. 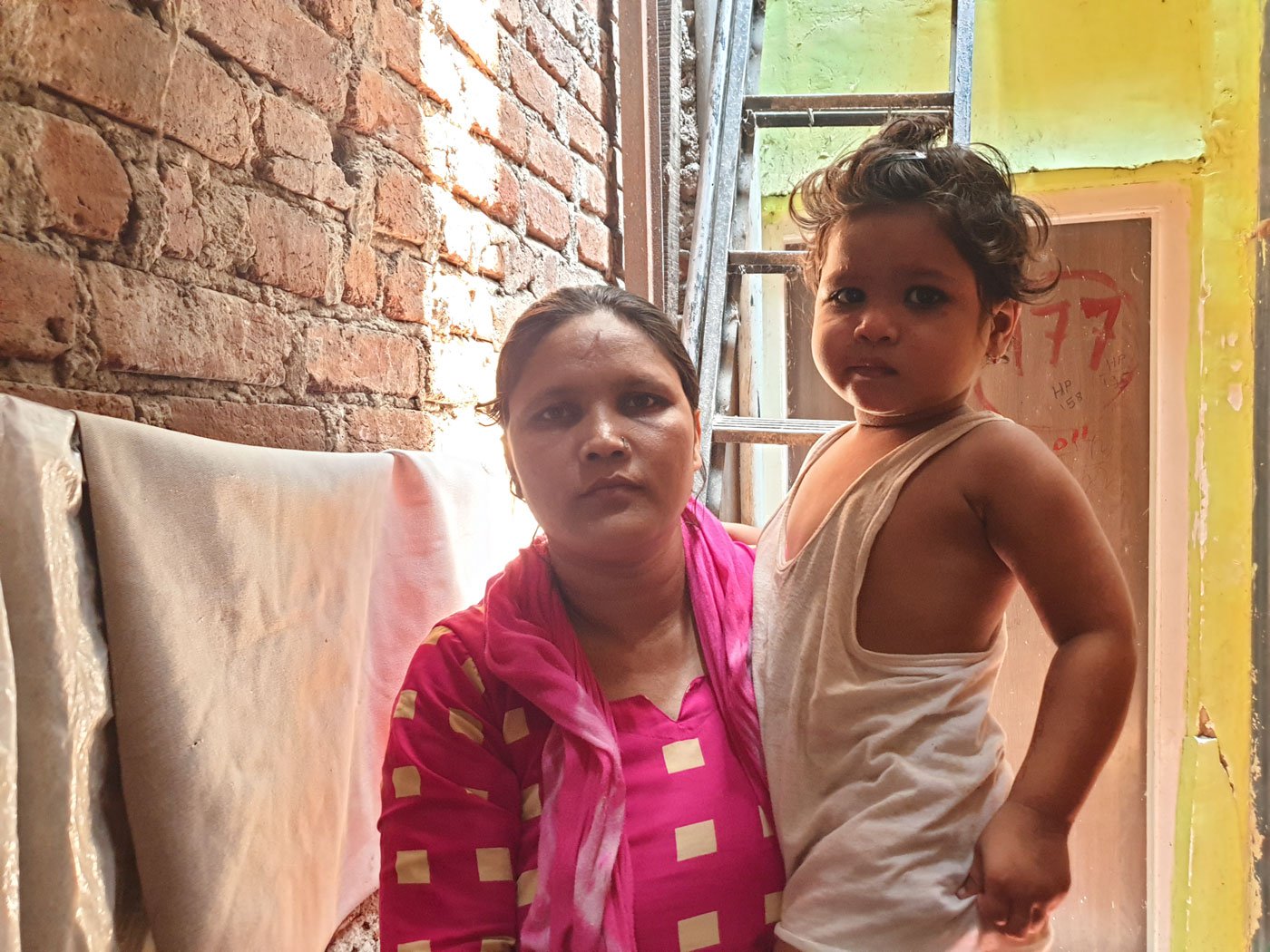 Moninissa and her family are also planning to return to their village in Faizabad district. Her husband lost a job as a packer in a garment factory during the 2020 lockdown, and has now once again lost his job as a driver

A few doors away in the narrow alleyways of Nargis Dutt Nagar, Moninissa and her husband Mohammed Shahnawaz are also planning to leave. They too belong to Abboo Sarai village. “My husband was earning Rs. 6,000 a month as a packer in a garments factory [in Santacruz West, before last year’s lockdown],” she says. “But there was no work when we came back to Mumbai.” The family had got on to a Shramik Special train at the end of May and returned in August. “So he took a job as a driver for a Bandra household three months back. They were paying only Rs. 5,000 a month because they didn’t need him every day.” Moninissa says. “Now they say they don’t need a driver at all. Where will he find a job during this lockdown?”

In the same slum colony, many other migrant workers employed in various work sectors are preparing to return to their villages for a second time during the pandemic. In the first round in 2020, the loss of livelihoods forced some of them to seek shelter from relatives and family networks back in their villages. And that’s what Safiya Ali is banking on now if her family return to their village.

“A few days with my mother, then with one brother and then with the other brother, aise karte karte ek do mahine kat jaayenge [one-two months will pass in the manner),” says Safiya, who is in her late 30, and lives in a cramped 100 square foot home with four children and her husband. “We have nothing in the village, no land and no work, so we didn’t go back there during the previous lockdown,” adds Safiya, after instructing her eldest daughter, 14-year-old Noor, to accompany her three-year-old brother to the public toilet. Noor Bano hasn’t gone to school for a year now, and is happy to have been promoted to Class 7 without an exam.

Safiya’s husband sells clothes on Bazaar Road in Bandra, and the family’s daily income has fallen to Rs. 100-Rs 150 since April 5, when the Maharashtra government imposed a night-time curfew and a daytime closure of shops and street-hawking activities. In the month of Ramzan before 2020, Safiya estimates he earned Rs. 600 a day. “We survived [during the last lockdown] on whatever rations were brought to us by politicians and organisations,” Safiya says. “If we earn during the daytime, we can eat at night. If there is no earning, then we just remain without food.” 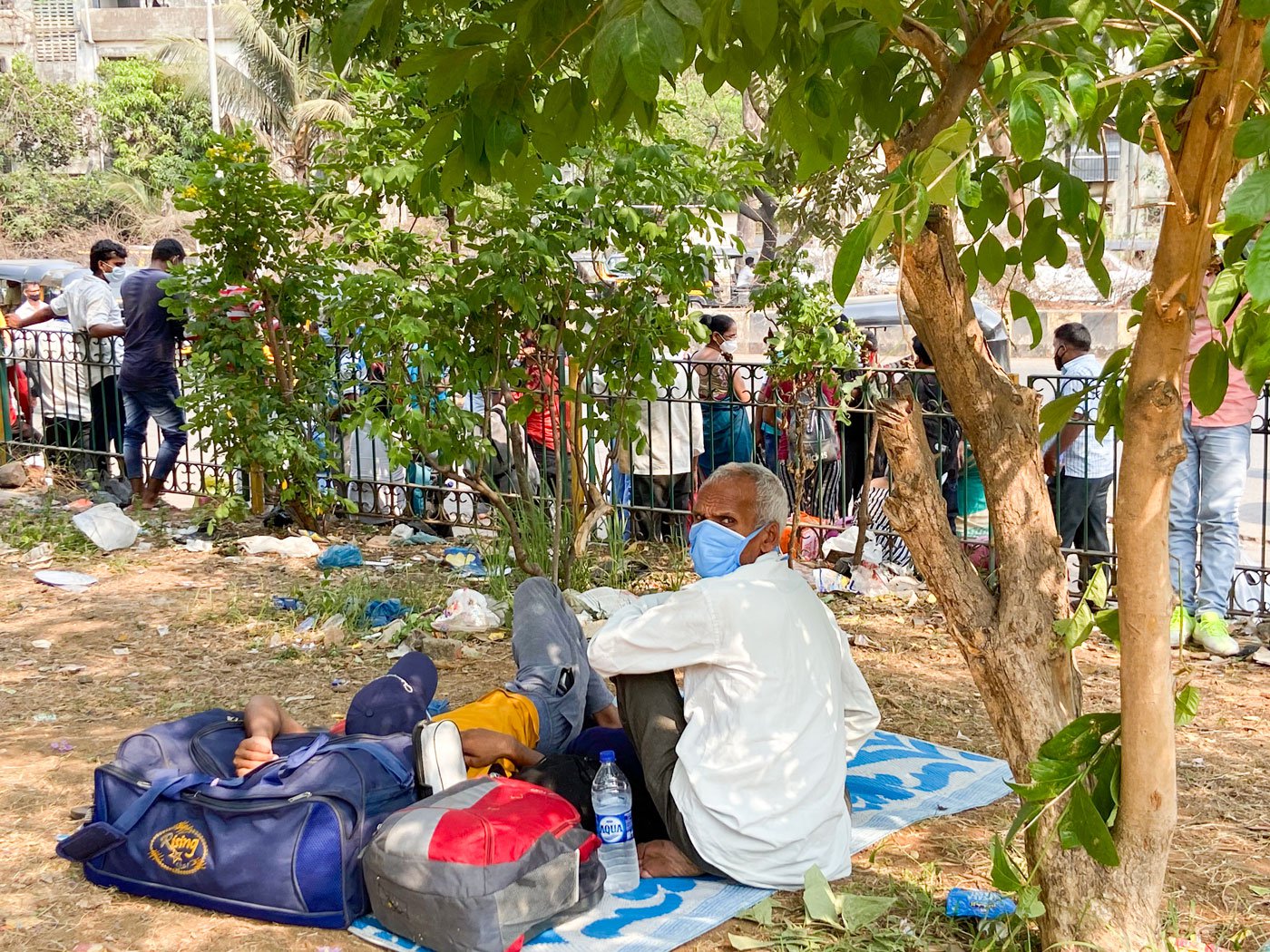 Safiya’s family does not allow her to work, as is common in several households in Nargis Dutt Nagar, a colony of around 1,200 homes (residents here estimate) located under and around the clover-shaped flyover of Bandra Reclamation. Somebody has told Safiya that the pradhaan , the elected gram panchayat representative of a village adjoining theirs in Uttar Pradesh’s Gonda district, is sending a bus. She is hoping to get her family seats on it.

“There are panchayat elections coming up in Gonda, so he wants people from his village to return in time for polling day,” Safiya says. She’s not sure if her own village of Akhadera in Haldharmau block also has elections, but she hopes to leave Mumbai this time. “We cannot afford to spend another lockdown here. Izzat sambhalni hai [We have to protect our honour].”

A few who are leaving from this colony on pre-planned visits will not return until the lockdown conditions are lifted. Sandeep Biharilal Sharma, 20, has a confirmed ticket to Gonda for May 5, from where he will reach Babhanan village in Chhapia block. “There’s a wedding in the family. Dad and one sister left last week already. But we won’t come back until we know there is enough work available,” he says.

Sandeep works as an assistant to a furniture-maker – he belongs to the Badhai community of accomplished wood carvers. “There’s no work right now, nobody is interested in getting new furniture or undertaking home renovations in these circumstances,” he says. “I can’t understand how the government is imposing another lockdown. Do they really not understand what kind of losses the poor have incurred?”

Just as work and earnings were slowly beginning to improve with a small trickle of new orders in March this year, the second wave of Covid-19 has swept in, he says. 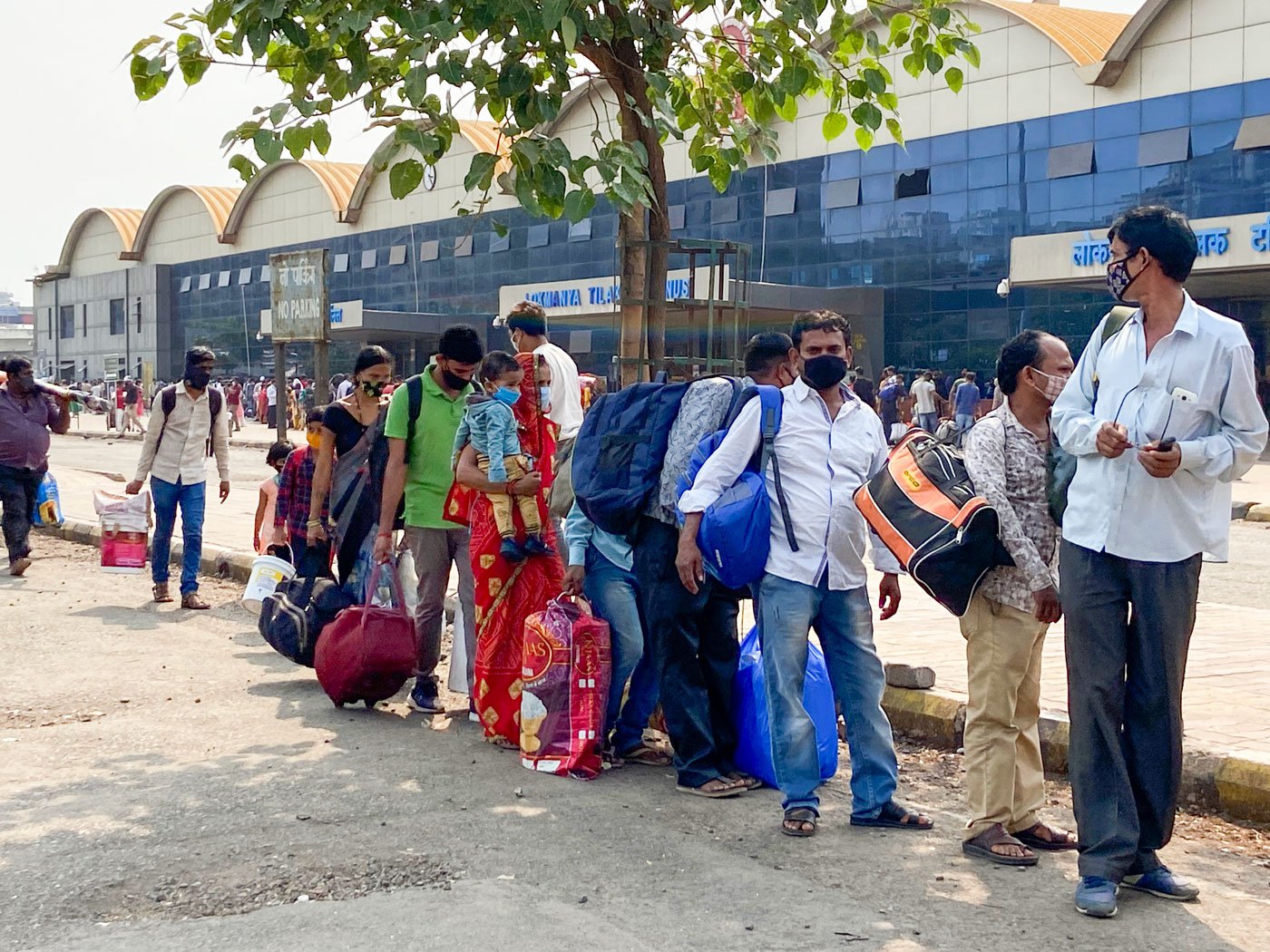 The rush at the Lokmanya Tilak Terminus and Bandra Terminus, from where several trains leave for Uttar Pradesh and Bihar, began a few days before the state government’s renewed restrictions were expected to be rolled out

The self-employed are struggling too. Among them is Sohail Khan, 35, who has lived in Nargis Dutt Nagar for nearly three decades. He is a fish vendor who buys his daily stock from the Versova fish market and sells it in and around his slum colony. “During Ramzan, obviously sales happen in the late evening. But by 7 p.m., the police start their rounds of our area asking us to shut down our stalls,” he says, angrily. “We don’t have any refrigeration or any other facility. So the unsold fish just rots.”

Khan sent his wife home to Akhadera village in Gonda about a week ago, when the new restrictions in Maharashtra were first announced. He and his brother Azam are waiting – and watching – for a short while. Their household income took a deep dent last year, and they are still hoping to cover some of their losses during the month of Ramzan, which began on April 14 his year.

Sohail’s younger brother Azam Khan is a rickshaw driver who bought his own Bajaj three-wheeler autorickshaw a couple of years ago. The monthly instalments of about Rs. 4,000 have become increasingly difficult to pay. “That EMI has to be paid, even though there is no work. The CM has kept autos operational — but if passengers are not allowed to go anywhere, what will the auto-drivers earn?” Sohail asks.

“The [state] government should declare assistance for those paying loan instalments, like they did the last time,” he adds. “If things remain the same, we’ll also head home to Gonda like we did last year. We are again at the mercy of the government.”

Kavitha Iyer has been a journalist for 20 years. She is the author of ‘Landscapes Of Loss: The Story Of An Indian Drought’ (HarperCollins, 2021).