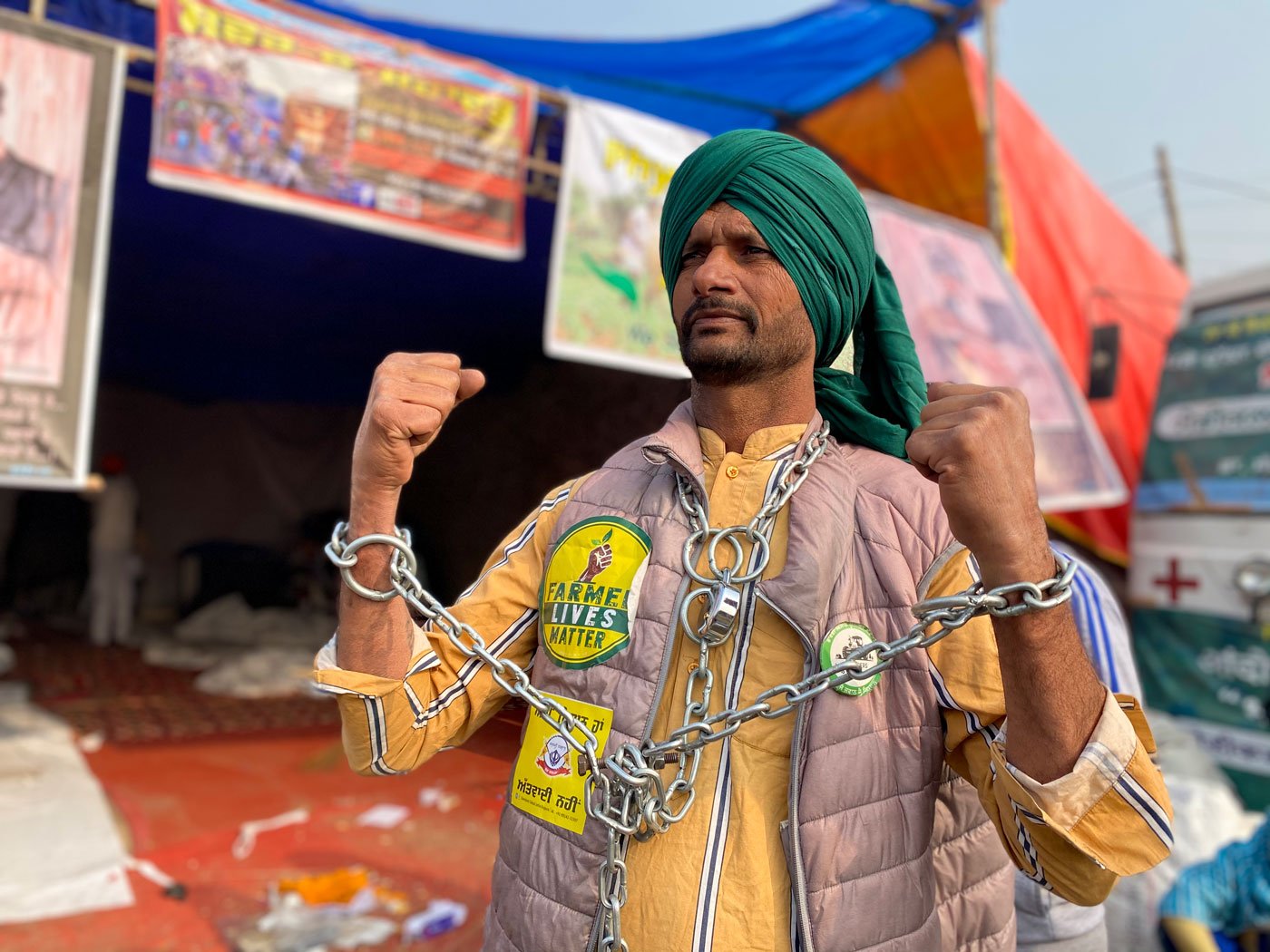 Kabal Singh farmer and the chains that bind

He is handcuffed and the chains around his neck extend downwards, all the way to his feet. His attire – white kurta with black bars – seems very much like that of a typical prison inmate.

But 42-year-old Kabal Singh has not been convicted of any crime and his shackles are self-imposed. He is a farmer from Rukanpura (also known as Khui Khera) village in Punjab’s Fazilka district.

He is among lakhs of peasants who have been protesting against the three recent farm laws, first issued as ordinances on June 5, 2020, then introduced as bills in Parliament on September 14, and hastened through to become Acts by the 20th of that month.

So why the self-inflicted manacles?

“When I saw the farmers demanding their rights for so long, I could not bear their pain. This chain that you see around my body is the reflection of their suffering. What they feel inside, I also feel the same.”

“The chain you see around me, the same chain surrounds all of us, you just have to look for it.” Kabal Singh sees the three unpopular laws as the latest links in those chains.

Watch video: ‘All of us farmers feel we are chained’

He is speaking to us at the biggest of the protest sites – Singhu in Sonipat district, Haryana, right on the Delhi border.

“God save us from the corporates who will reduce us to landless farmers. Why would we want to become workers when we have our own land to cultivate on? How can we let big corporates control our land?” he asks.

“The key to the lock on my chains is in the hands of Ambani and Adani. The Modi government should take that key from them and open this lock. I request the prime minister with folded hands to please repeal these laws.”

The laws the farmers are protesting against are: the Farmers’ Produce Trade and Commerce (Promotion and Facilitation) Act, 2020 ; the Farmers (Empowerment and Protection) Agreement on Price Assurance and Farm Services Act. 2020 ;  and the Essential Commodities (Amendment) Act, 2020 . The laws have also been criticised as affecting every Indian as they disable the right to legal recourse of all citizens, undermining Article 32 of the Indian Constitution.

These new Acts have angered cultivators, who see them as devastating to their livelihoods because they will expand the space for large corporates and give then even greater power over farmers and farming. They also undermine the main forms of support to the cultivator, including the minimum support price (MSP), the agricultural produce marketing committees (APMCs), state procurement and more.

“When it comes to pain,” says Kabal Singh, “holding this five-kilogram chain throughout the day makes me go numb. But my physical pain is nothing compared to that of the farmers.” 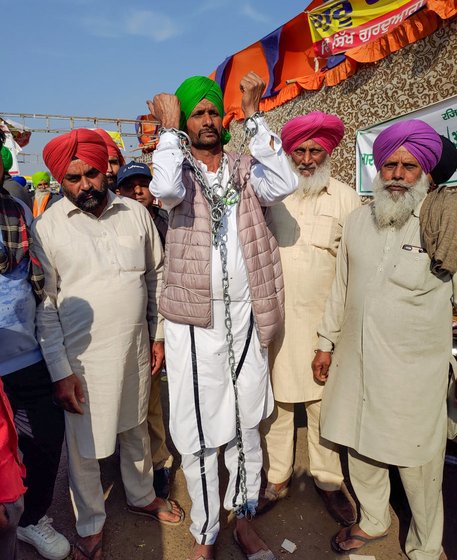 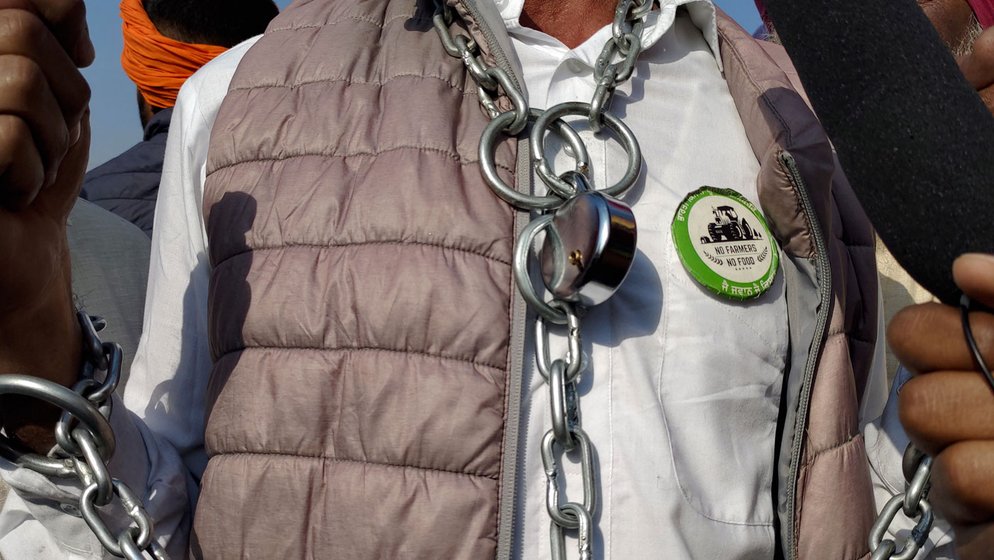 Holding the five-kilo chain throughout the day makes Kabal Singh go numb. But it's nothing compared to the farmers' pain, he says

He keeps his hands held up throughout while talking to us. Doing that so often for much of the day must be tiring and stressful. “I chain myself up at 5 a.m.” he says, “and keep myself locked up this way until the sun sets.”

This farmer, who till two-and-a-half years ago owned five acres of land, adds, “I got this chain made in my village.” Now he has just three acres on which he grows mainly wheat and cotton. He had to sell two to raise money for the medical treatment of his daughter and ailing father.

He spent several lakhs of rupees from the sale of that land on their healthcare. “But,” he says with evident sadness, “I could not save them.” His 20-year-old daughter died of jaundice. And his father soon after her, following a prolonged illness. He does not know how he himself would survive without the income from the milk of two cows he owns.

“My mother Balbir Kaur was coming to join the protest. But she had a fall while reaching here (travelling, like so many others, in a tractor trolley) and we learned that she had broken her hip-bone," he says. “My ancestors were farmers. I see the government’s injustice to us. That is what we are fighting against. I do not want our children to face this.”

He adds that the soldiers at India’s borders are the children of farmers. “When they are martyred, you make them heroes. And rightly so. But when we are demanding our rights here, we are criminalised. Why so?”

For Kabal Singh now, “one thing is sure: I will not unchain myself until the Modi government repeals the farm laws.”