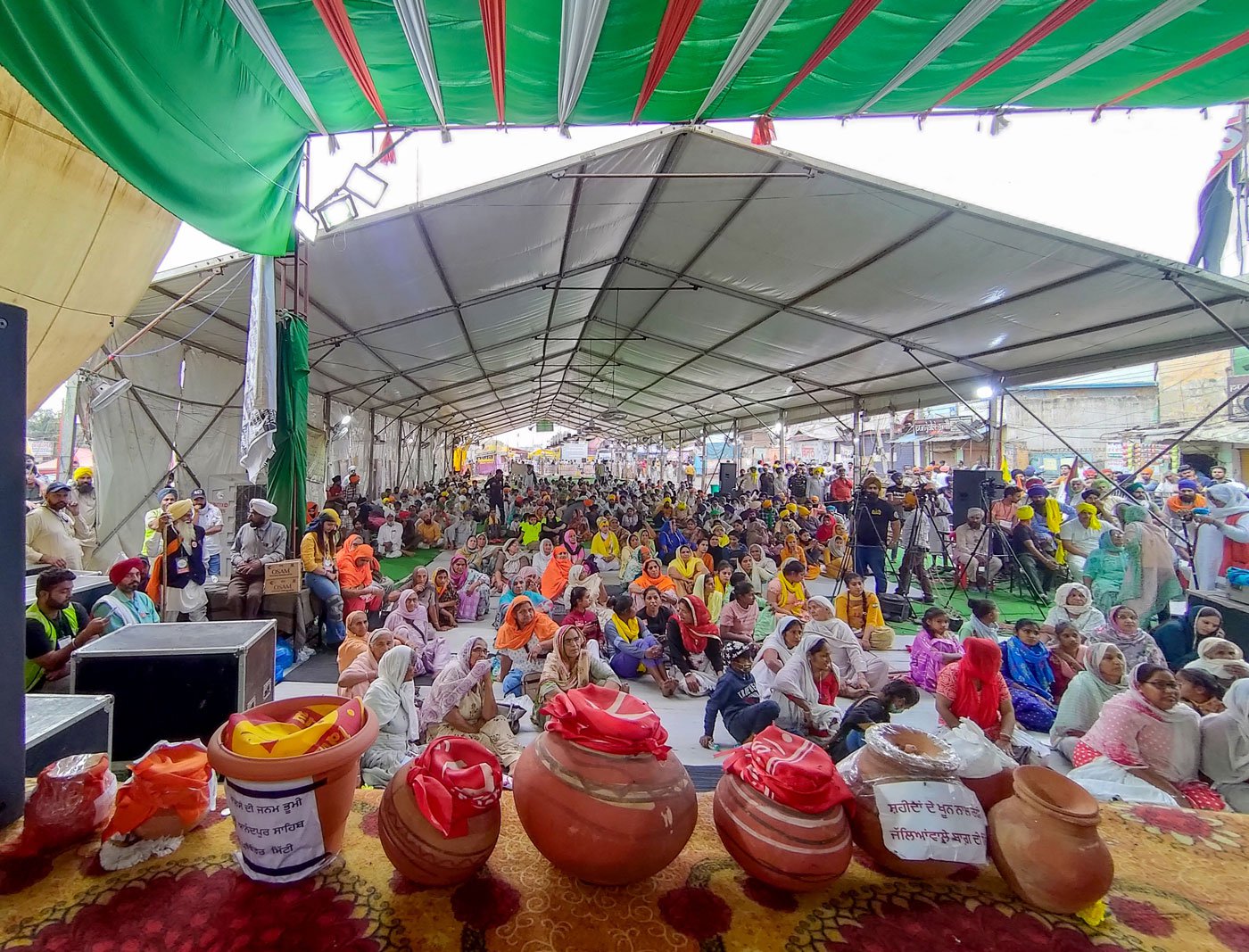 Mitti of the martyrs, Singhu's soil of struggle

It was an inspiring and emotional moment when, on the martyrdom day of Bhagat Singh, Rajguru and Sukhdev, eight pots of soil from the villages of martyrs in Punjab reached the protesting farmers at Singhu

The large crowd in front of the main stage became silent. The only inaudible sound which remained was that of millions of hearts beating in unison here and hundreds of kilometres away in each person’s home state. Leaders stood with their heads bowed in respect, their spirits soaring high. In the air suffused with emotion, all eyes watched in rising anticipation as eight young men climbed onto the stage of the Samyukta Kisan Morcha at the Singhu border carrying earthen pots on their heads.

Each pot laden with memories and sacred soil that had travelled many miles to be with the protesting farmers on the borders of Delhi to mark the 90th martyrdom day of Bhagat Singh, Rajguru and Sukhdev on March 23, 2021.

“These young men from Punjab have brought the soil from eight historical spots. Places that are special to us, in our hearts – and we welcome them,” announced Jatinder Singh Chhina, a farm leader, from the stage.

The soil that has always had material and cultural significance in the lives of farmers acquired new political, historical and metaphorical meaning on this Shahid Diwas. Bringing the mitti sacred to their hearts from the villages of different martyrs was a way to reinvigorate and inspire the protesting farmers. And the idea sprang from ordinary people at district-level meetings of farm unions and activists. 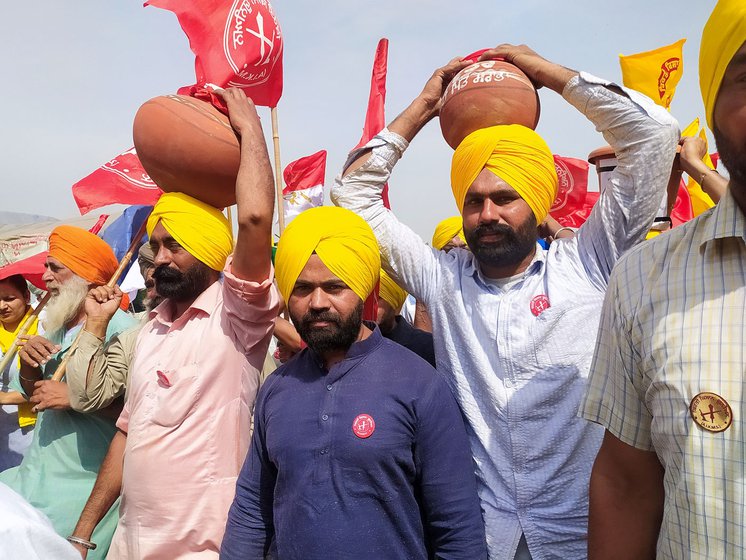 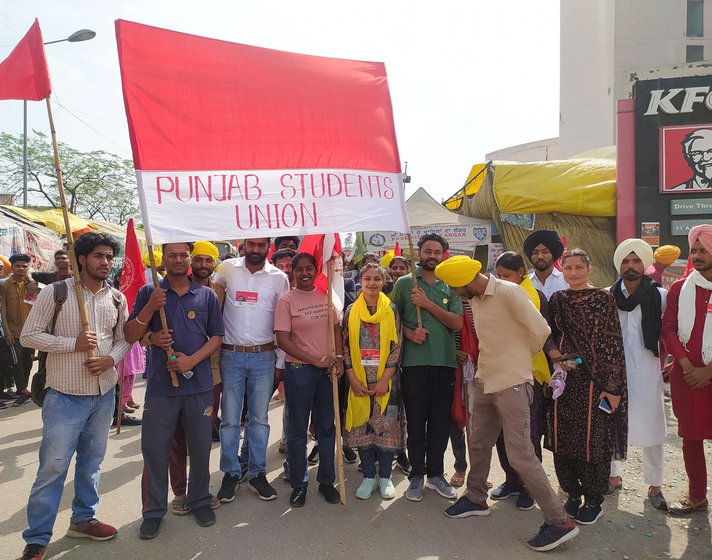 Young farmers carrying the pots on their heads as they walk to towards the stage at Singhu. Left: Supporters stand by

“Right now, I am emotional. We all are. I do not know what blood and bones these martyrs were made of,” said Bhupender Singh Longowal, 35, from Sangrur in Punjab, one of the farmers who carried the soil . “We collected the mitti because it gives us courage and determination to fight against the oppressors.”

Martyrs’ Day, March 23, also marked the 117th day of the largest-ever non-violent and historic farmers’ protests at the gates of Delhi.

The farmers have been opposing the new legal ‘reforms’ in the form of The Farmers’ Produce Trade and Commerce (Promotion and Facilitation) Act, 2020; The Farmers (Empowerment and Protection) Agreement on Price Assurance and Farm Services Act, 2020; and The Essential Commodities (Amendment) Act, 2020.

These laws, say the farmers, undermine the main forms of support to the cultivator, including the minimum support price (MSP), the agricultural produce marketing committees (APMC), state procurement and more.

They see their struggle as being against the complete corporate takeover of agriculture that fails to respect the rights, let alone meet any needs of the farmer-producer. They also see their struggle as one for justice and democracy along with a fight for their land and rights. Theirs is also a struggle for independence, but this time the oppressor is not an outsider. 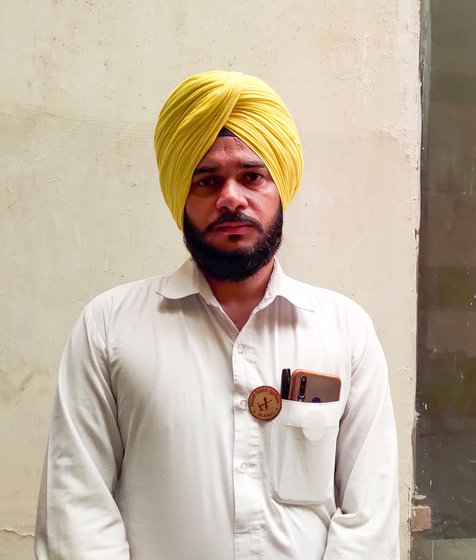 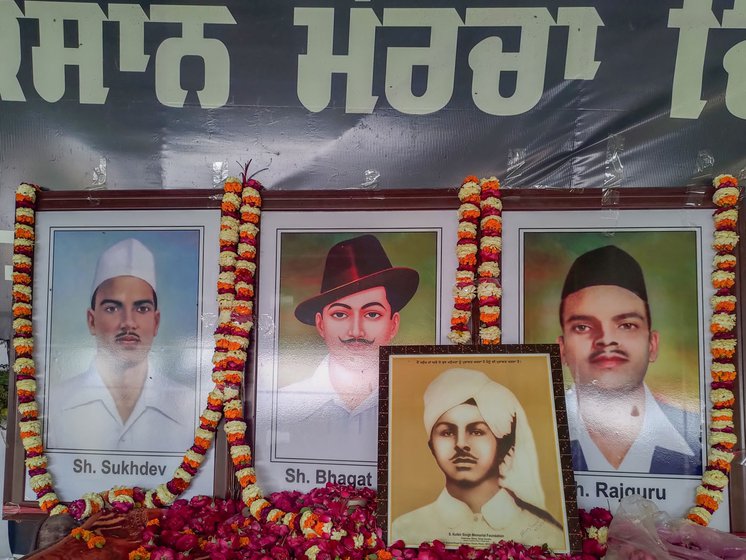 'Right now, I am emotional. We all are. I do not know what blood and bones these martyrs were made of', said Bhupender Singh Longowal. Left: Portraits of Sukhdev, Bhagat Singh and Rajguru at the Shahid Diwas event

“The revolutionaries fought against the Britishers,” said 23-year-old Mohan Singh Aulakh from Aulakh village in Kot Kapura block of Punjab’s Faridkot district. “That was an oppressive and brutal rule. The point is not that the British left. The problem is that the atrocious rule persists till today.” So for him and other there that day, reclaiming the soil enriched by the sacrifices of freedom fighters became a symbolic political act of asserting constitutional rights.

They arrived here at Singhu on the morning of March 23 – over 2,000 farmers from around the country. Photographs of Bhagat Singh, Sukhdev Thapar and Shivaram Hari Rajguru were prominent on the stage, where the soil-filled pots were being placed.

Each of these legendary freedom fighters was just in his 20s when they were hanged to death by the British in Lahore’s central jail on March 23, 1931. Their dead bodies were stealthily brought to Hussainiwala village in the dark night and consigned to flames. In this village, on the bank of the river Sutlej in Punjab’s Firozpur district the Hussainiwala National Martyrs Memorial was built in 1968. This is also where another of their revolutionary allies, Batukeshwar Dutt, was cremated, as was Bhagat Singh’s mother Vidyawati. The first pot on the Singhu stage contained soil from here.

When Bhagat Singh was executed he had in his pocket a photograph of Kartar Singh Sarabha, another heroic freedom fighter hanged by the British in 1915 when he was just 19. The second pot of soil came from his village, Sarabha in Ludhiana district of Punjab. As Bhagat Singh’s mother Vidyawati said of the young Indian revolutionary, who was a journalist and leading member of the Ghadar Party, he was her son’s “hero, friend and companion.”

But Bhagat Singh’s story begins with his visit, at age 12, to Jallianwala Bagh in Amritsar, Punjab. Over 1,000 unarmed people had been massacred there on April 13, 1919, on the orders of Brigadier General Reginald Dyer of the British army. Bhagat Singh collected clumps of blood-stained soil from Jallianwala and carried these back to his village. He set the soil in a part of his grandfather’s garden and watched flowers grow from that ground. The third pot that arrived at Singhu came from this bagh . 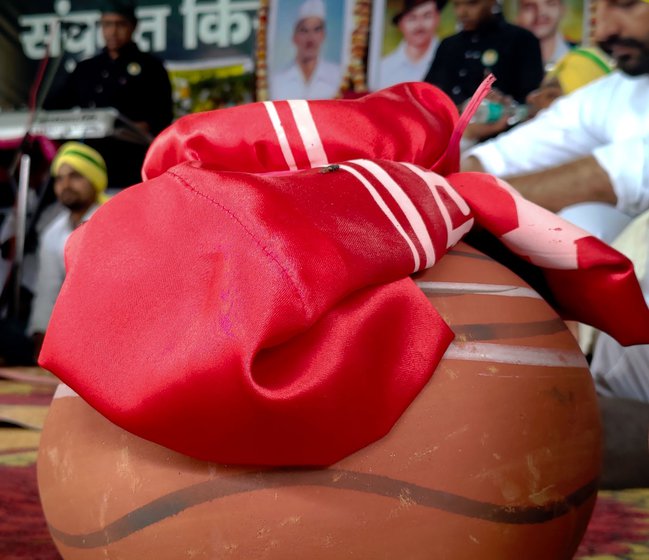 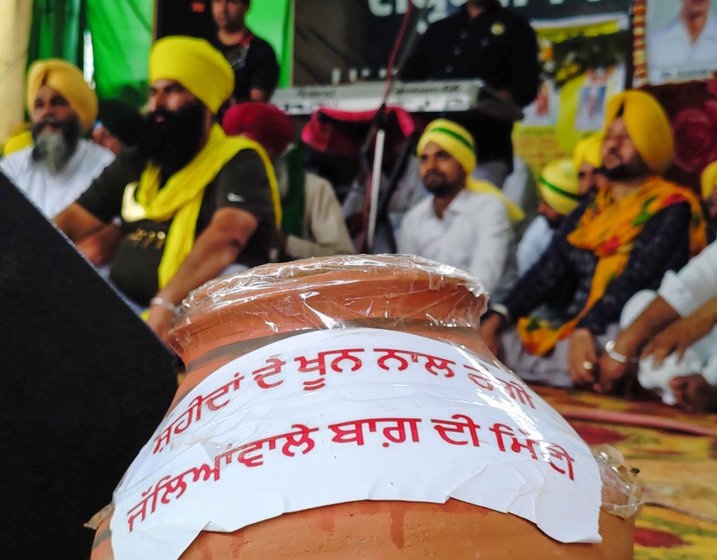 Left: The pot with mitti from Khatkar Kalan, ancestral village of Bhagat Singh just outside Banga town in Punjab's Shahid Bhagat Singh Nagar district. Right: Soil from Jallianwala Bagh, which Gen Dyer turned into a graveyard of innocent people in 1919

The fourth pot of soil came from Sunam in Punjab’s Sangrur district. That is the village of Udham Singh – who changed his name to Mohammad Singh Azad during his trial in a British court for shooting dead Michael Francis O’Dwyer in London on March 13, 1940. O’Dwyer, as Lieutenant Governor of the Punjab, had endorsed Dyer’s actions at Jallianwala. He was sentenced to death and hanged on July 31, 1940, at Pentonville Prison in London. In 1974, his remains were brought back to India and he was cremated in Sunam.

“The way Bhagat Singh, Kartar Singh Sarabha, Chacha Ajit Singh, Udham Singh and our gurus fought against oppressors, we are also determined to follow our leaders’ path,” said Bhupendrer Longowal. Many of the other farmers at Singhu echoed his sentiments.

“We have always been defying the imposition of the will of the powerful over the powerless,” said Abhay Singh, 64, Bhagat Singh’s nephew, remembering the nearly 300 farmers who have lost their lives during the ongoing protests against the farm laws.

The fifth pot came from Fatehgarh Sahib, now a town in the Punjab district of the same name. That’s where, on December 26, 1704, the younger sons of Guru Gobind Singh, five-year-old Baba Fateh Singhand seven-year-old Baba Zorawar Singh were bricked up alive on the orders of the Mughal Governor of Sirhind, Wazir Khan.

The sixth pot brought soil from Gurudwara Katalgarh Sahib, which marks the site in Chamkaur town in Punjab’s Rupnagar district where the two elder sons of Guru Gobind Singh – 17-year-old Ajit Singh and 14-year-old Jujhar Singh – fell in battle against the Mughals. Ranbir Singh, from Nurpur Bedi block in Rupnagar district, carried the pot here. Stories of the courage and martyrdom of the four brothers are deeply etched in the minds of many of the anti-farm law protestors. 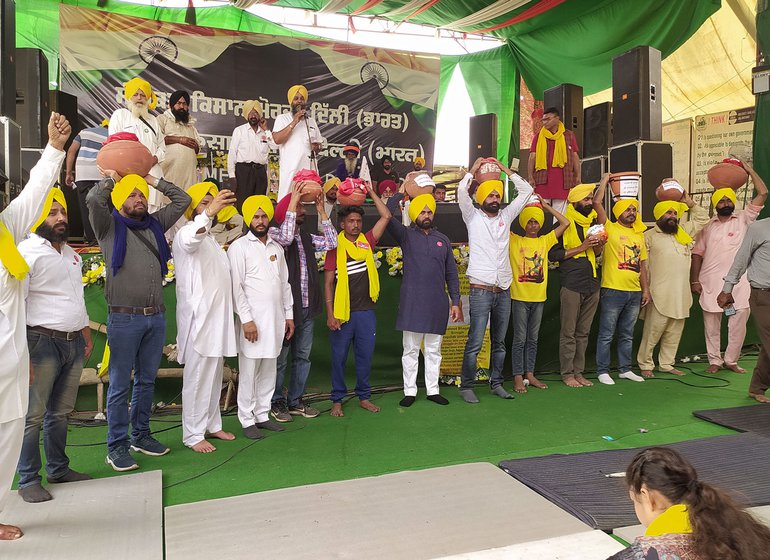 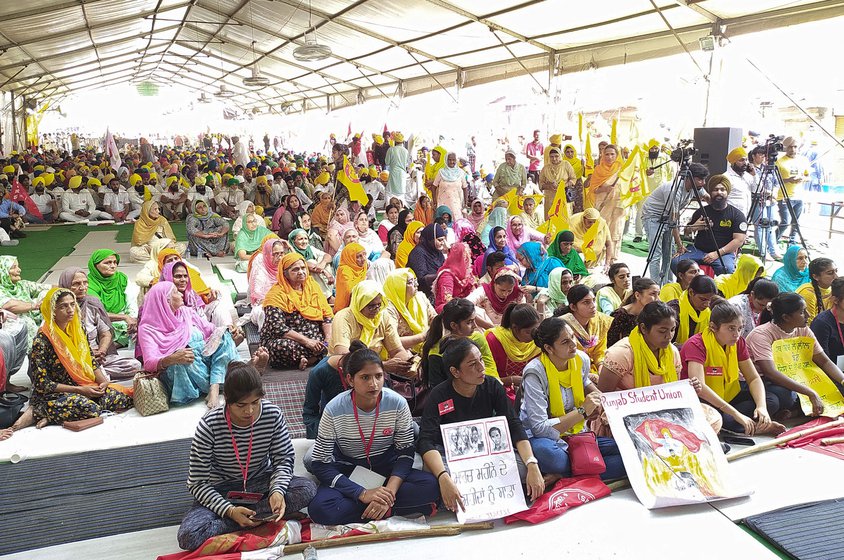 The seventh pot was from Anandpur Sahib, the birthplace of the Khalsa in Punjab’s Rupnagar district. Khalsa means ‘pure’, and denotes a special community within Sikhism founded by Guru Gobind Singh in 1699, of warriors with a duty to protect the innocent from persecution and oppression. “We got the spirit to fight back with the formation of Khalsa. And, the protests against the farm laws also began in the Punjab. Ours is a country where people respect the martyrs. Indians come from a tradition where we pay homage to our loved ones, who are no more,” said Ranbir Singh.

Three of the young men who brought the soil from different places, Bhuprender, Mohan and Ranbir, said that farmers protesting at the borders could not go to these places themselves, but the soil from there would “rejuvenate their resolve to fight back, while boosting their spirit and morale.”

The final pot, in a row of eight, was brought to Singhu from Khatkar Kalan, ancestral village of Bhagat Singh just outside Banga town in Punjab’s Shahid Bhagat Singh Nagar district. “The crux of Bhagat Singh’s ideas,” said his nephew Abhay Singh, “was that exploitation of humans by humans and of nations by nations must end. This fight at the borders of Delhi is a move towards achieving his ideals.”

“Bhagat Singh is called Shaheed-e-Azam because of his ideas. The idea is that you have to write your own history. And we, as women, as farmers, as the oppressed, are writing our history,” said 38-year-old farmer and activist Savita, who owns five acres of land in Sorkhi village in Hansi-I tehsil of Haryana’s Hisar district.

“This government is bringing these laws only to give big corporations easy access to our land. Those who defy the decree of the centre, the executive sends them behind bars. We fight against not just the three farm laws, but also the corporations. We have fought against the British in the past. We will do so with their allies now.”