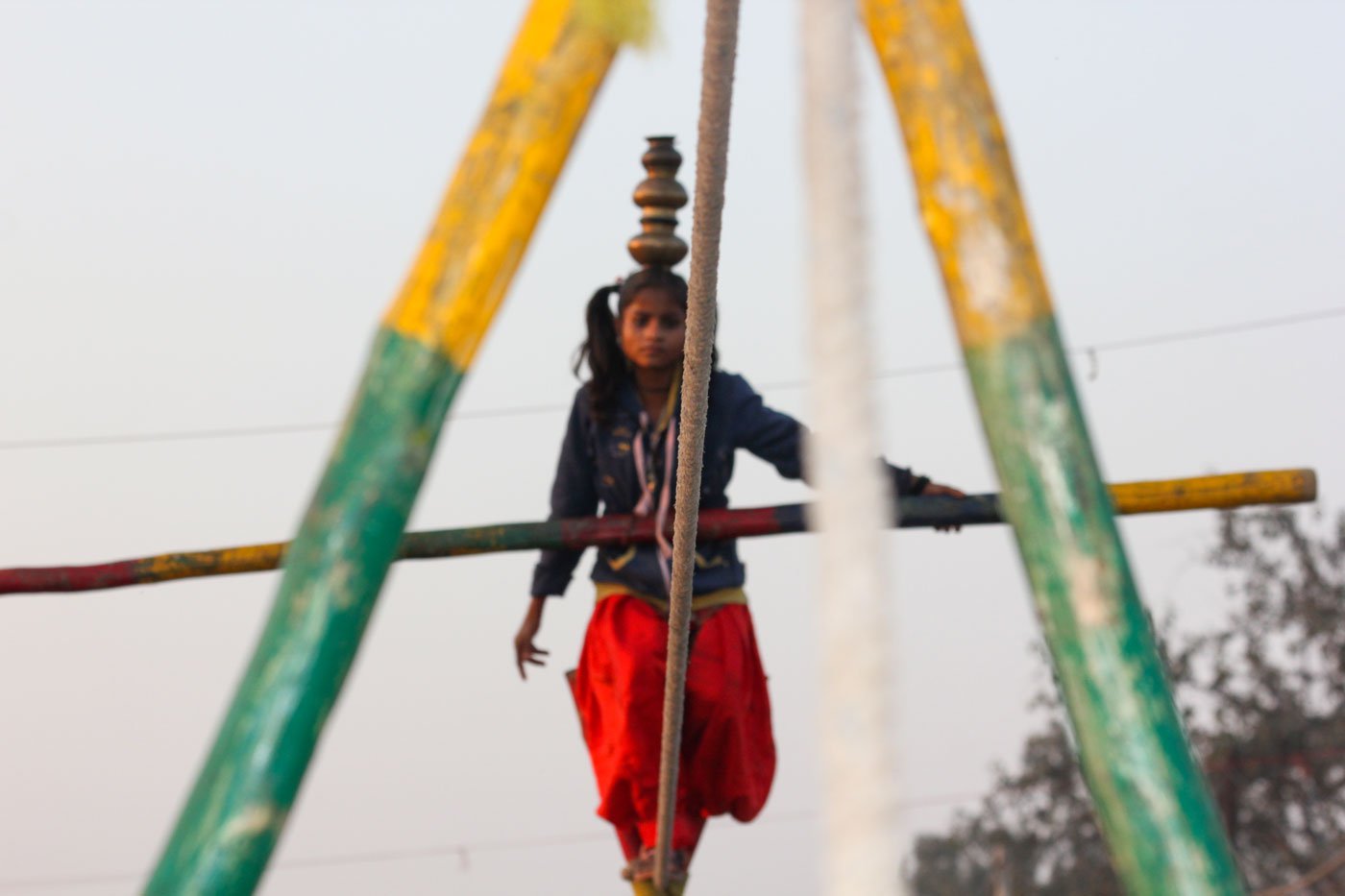 Nats at Singhu: nearing the end of their rope

Nat dancers move between their village in Chhattisgarh and the protest site at Delhi’s Singhu border, supporting the fight for farmers’ rights even as they themselves struggle to make a living

A song from a 1980s’ Bollywood movie, blaring away from a loudspeaker, fills the air as young Rani gets ready to put up yet another 45-minute performance to entertain an unusual audience – a group of protesting farmers at Singhu:

“Ye aansu ye jazbaat tum bechte ho, gharibon ke halat
Tum bechte ho, amiron ki sham gharibon ke naam”
(“These tears, these emotions, the plight of the poor,
you peddle them all
This eve of the rich and prosperous
you celebrate in the name of the poor”)

It is September 2021. The deadly second wave of Covid-19 has subsided and 26-year-old Vikram Nat, his wife Lil, 22, and his 12-year-old sister-in-law Rani are back performing at Singhu, on the Delhi-Haryana border.

In April 2021 they had gone to Bargaon, their village in Chhattisgarh, for the second time since the beginning of the Covid-19 pandemic. That was almost a month after I first met them when I was covering the farmers’ protests. They had moved to Singhu in March, performing for the farmers. They do it even now.

Rani grips a 16-foot-long wooden staff, weighing close to four kilos, in her hands. She gracefully walks barefoot on a wobbling cable of 18-20 feet tied between two poles, balancing three brass pots on her head. A tiny flag flutters atop the brass pots; the text on it reads: No Farmers, No Food. 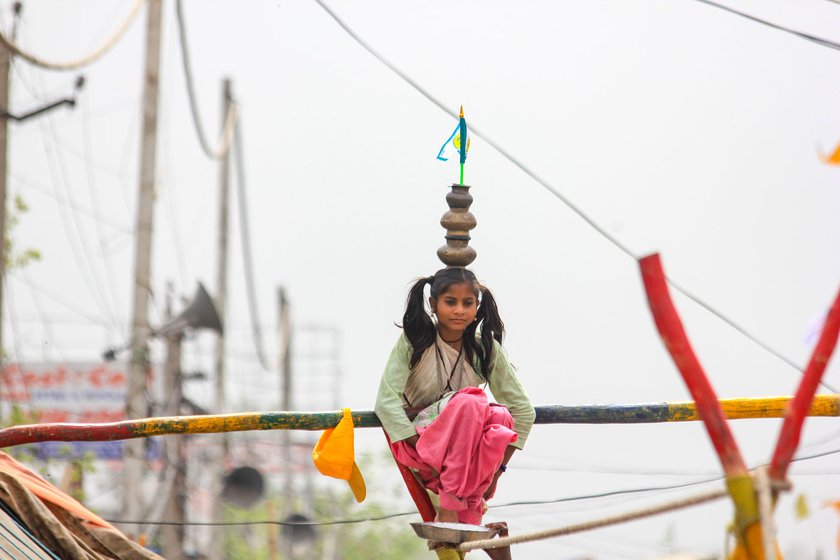 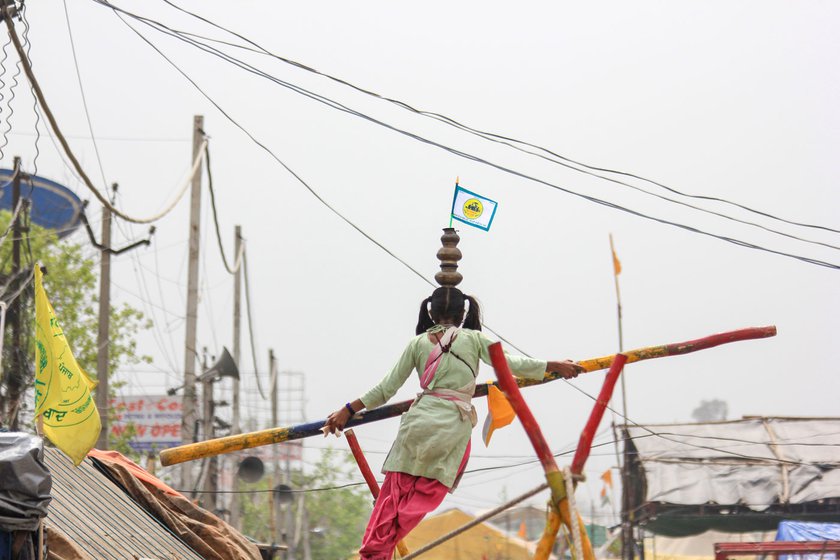 Rani Nat gets ready to walk on the wobbling cable with a plate beneath her feet. She moves with a long wooden staff, balancing brass pots on her head

After walking a couple of lengths, Rani adds a plate beneath her feet and sits down on her knees to traverse the same distance again before introducing one more prop, a bicycle wheel, to her high-wire capers. Time and again, she rapidly and rhythmically oscillates in the air, 10 feet above the bare ground on that precarious rope, with steadfast concentration.

“She will not fall,” Vikram assures me. “It is our centuries-old traditional dance. A talent that is passed on to us from generations. We are experts at it,” he explains while taking care of the music and the loudspeakers.

Vikram and his family are from the Nat caste, a Dalit community of migrating artists known for their acrobatic skills, from Janjgir-Champa district of Chhattisgarh, 1,200 kilometres from Delhi.

Lil, Vikram’s wife is walking under the rope. He assures me that she is an expert at catching Rani in case she falls. “When I was of Rani’s age I also used to dance on the ropes,” Lil says. “But not anymore. My body does not allow it.” Lil has had her falls. “Rani,” she says, “started practicing when she was three and began performing soon after.”

In the Nat mohalla of Bargaon, Vikram’s family is among the few that have been practicing and performing the rope dance – for five generations, as far as Vikram can remember. They have moved across Rajasthan, Punjab and Madhya Pradesh, performing at traffic lights to eke out a living. 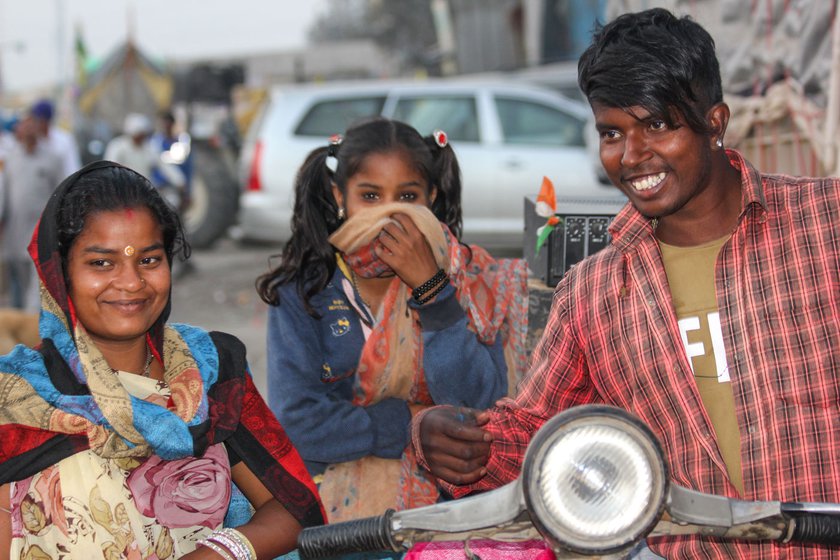 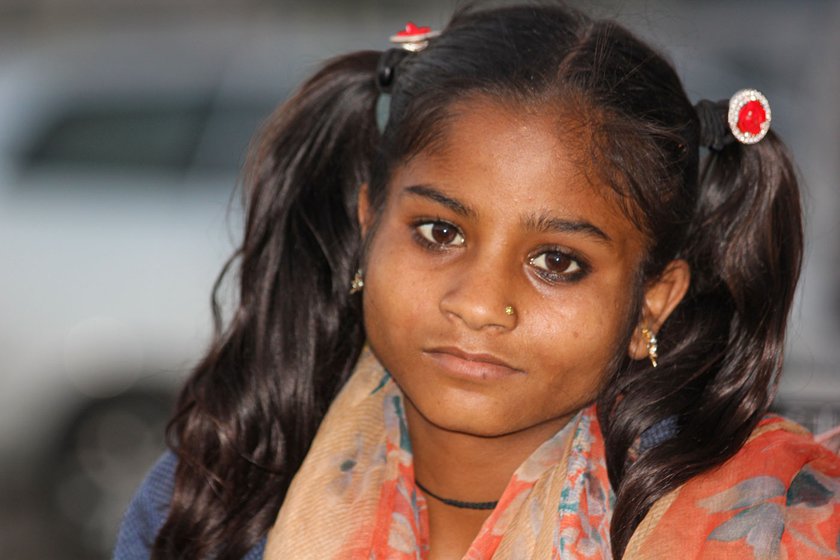 Vikram was barely nine when he first joined his grandfather in Delhi, where the senior artist had been performing from much earlier – “when Nehru used to move around there with a rose on his coat,” he says.

Last year, Vikram and his family were staying in a slum settlement near Patel Nagar railway station in West Delhi, but they went back to their home village a little before the nationwide lockdown was announced in March 2020. “We heard that the coronavirus was around,” Vikram says, “and there would be no hospital or doctors to take care of poor people like us. They would be busy treating the rich. Besides, even if we had to die, we preferred to die in our own homes, where our parents and family live.”

The family returned to Delhi in November 2020; they had no fixed source of income back home. The money Vikram earned by working on jobs under MNREGA (Mahatma Gandhi National Rural Employment Guarantee Act) was not enough. “I would dig the earth equivalent to the size of one room and get 180 rupees in return. We would mix water in leftover rice and eat it. Somehow, I managed to save eight to nine thousand rupees in nine months. We used all that money to come back to Delhi by train. Even on that journey, we would eat a spoonful each whenever we felt hungry,” he says, “so that it would not get over quickly.”

They were performing in Ghaziabad in the early days of 2021 when they heard about the farmers’ protests at Delhi’s borders, in Singhu and Tikri. They then came to Singhu to stay and perform, renting a house near the protest site at Rs. 2,000 a month. Even though they do not come from the family of farmers, Vikram says that they understand their struggle. “We do not know if we had land or not,” says Vikram, “but my family says that we did. Either our ancestors sold it or someone else occupied it.”

The family’s experience at Singhu has been distinctly different. Unlike people who treat them harshly, “the protesting farmers receive us with great hospitality,” says Lil

Watch video: Dancing at Singhu: Nat performers from Chhattisgarh at the farm protests

They usually made Rs. 400-500 per day walking on the tightrope, but at Singhu they began making between Rs. 800 to 1,500 a day. “We had come here to earn money but now we understand the need to stand up for the farmers. We support them. I pray to god that the demands that have brought them here get fulfilled,” says Lil. In their hearts they have been performing in solidarity with the farmers at Singhu, Vikram adds. Farmers have been protesting resolutely for many months now against the three farm laws pushed through in Parliament in September 2020.

The farmers at the protest site do not discriminate against them like others do in Delhi. He remembers a time when Rani first came to the city and wanted to ride the metro, but he could never take her even after making several attempts. “The metro guards did not allow us to enter. ‘You look dirty’ they said,” Vikram explains. This even when they had put on washed clothes, and come with the sole purpose of riding in the metro train. They eventually put a small pull cart together and fixed a motor to it, to carry their tools and belongings around. “That was our metro ride. We have our cart, we see Delhi by sitting in it,” continues Vikram.

“People chase us away from parks and market places when we try to perform there. When vehicles halt at traffic lights, and we are performing at the junction, we are happy to get 10 rupees from the commuters. But sometimes we are deprived of that as well. People ask us to leave,” says Vikram.

However, the family’s experience at Singhu has been distinctly different. Unlike people who treat them harshly, “the protesting farmers receive us with great hospitality,” says Lil. “They give us food as if we are their family members. Unlike the other places where we perform, no one ever scolds us here. The amount of respect we have received here, we have not got anywhere else.” 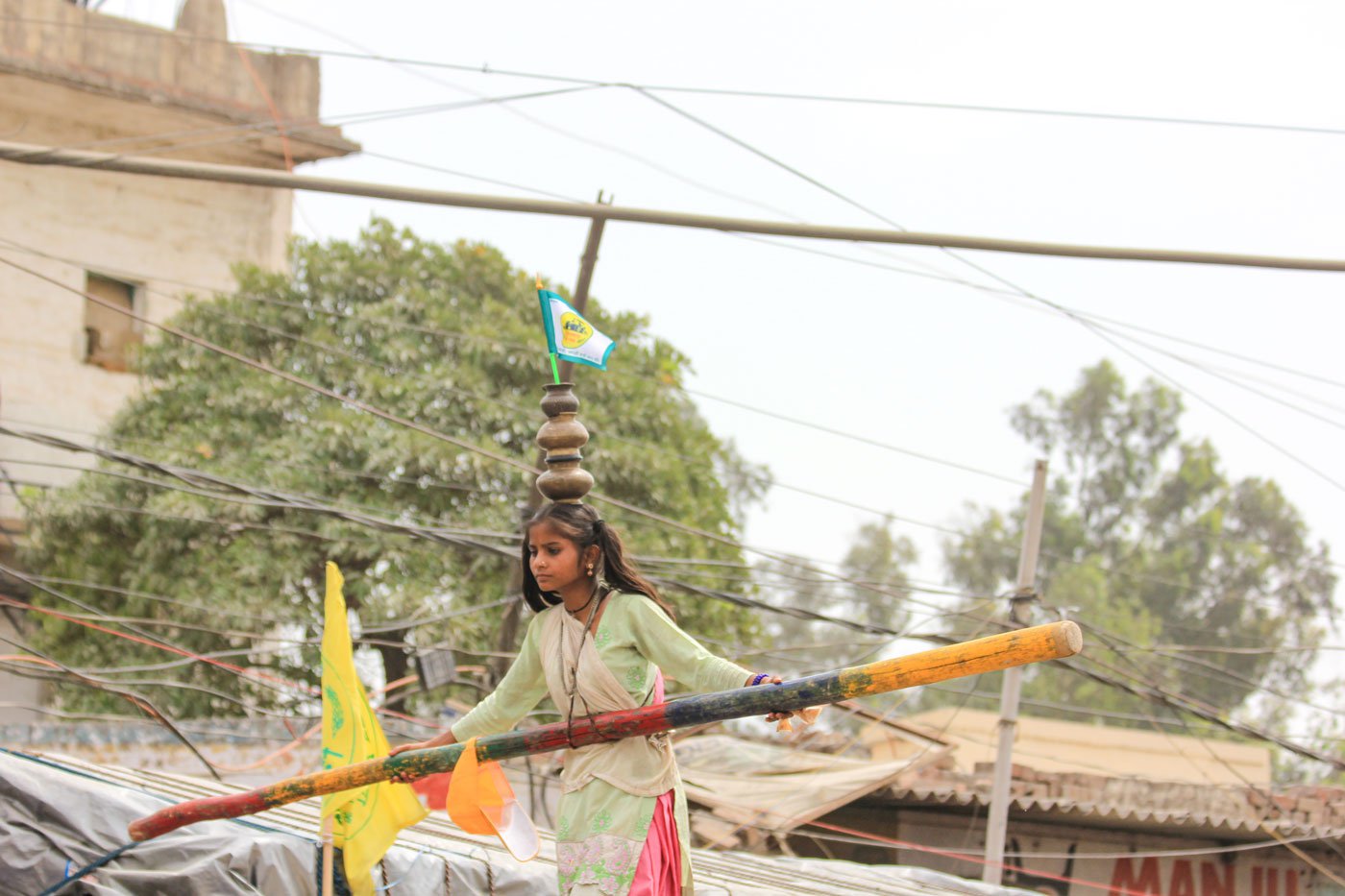 A flag fluttering on the pots atop Rani's head says, 'No Farmers, No Food'. It expresses the Nat family's solidarity with the protesting farmers

“The world does not understand us. The media treats us with disdain. That is why we do not talk to them,” Lil adds. “And that is why we face consequences like the police locking us up in jails. Inside the prisons, ours are the bodies, and theirs, the lathis. ”

Once when they were performing at Narela, some seven kilometres from Singhu, “the cops came and took two days’ worth of our hard-earned money, saying we are playing with our lives, ” Vikram complains. At another time he was taken to a jail in Ghaziabad on suspicion of theft. “ Agar churana hoga to Ambani ka almira churaaenge ” (“If I really wanted to steal, I would go for Ambani's locker”), he told the police. “But I was beaten up mercilessly.”

The farmers are different. “They neither say a word against us nor ask us to vacate the place. Only when the paath [recitation of Guru Granth Sahib] is taking place on the stage, they politely ask us to bring down the volume of our loudspeaker,” says Vikram.

The family’s stay in Singhu ended in less than five months, when they had to flee to their village to escape the pandemic’s second wave. Now, upon their return in September, the house they rented is no longer available. The little houses and tents constructed by farmers at the protest site are still there; tractors and trollies continue to ferry people between their villages and the site. But the agricultural season is on, so there are fewer people at Singhu than a few months ago – which has meant a dip in the performers’ meagre income.

While they go to the nearby areas to make a little more, Vikram, Lil and Rani continue to live near Singhu. They perform three days of the week for the farmers, in solidarity with their long-standing struggle.