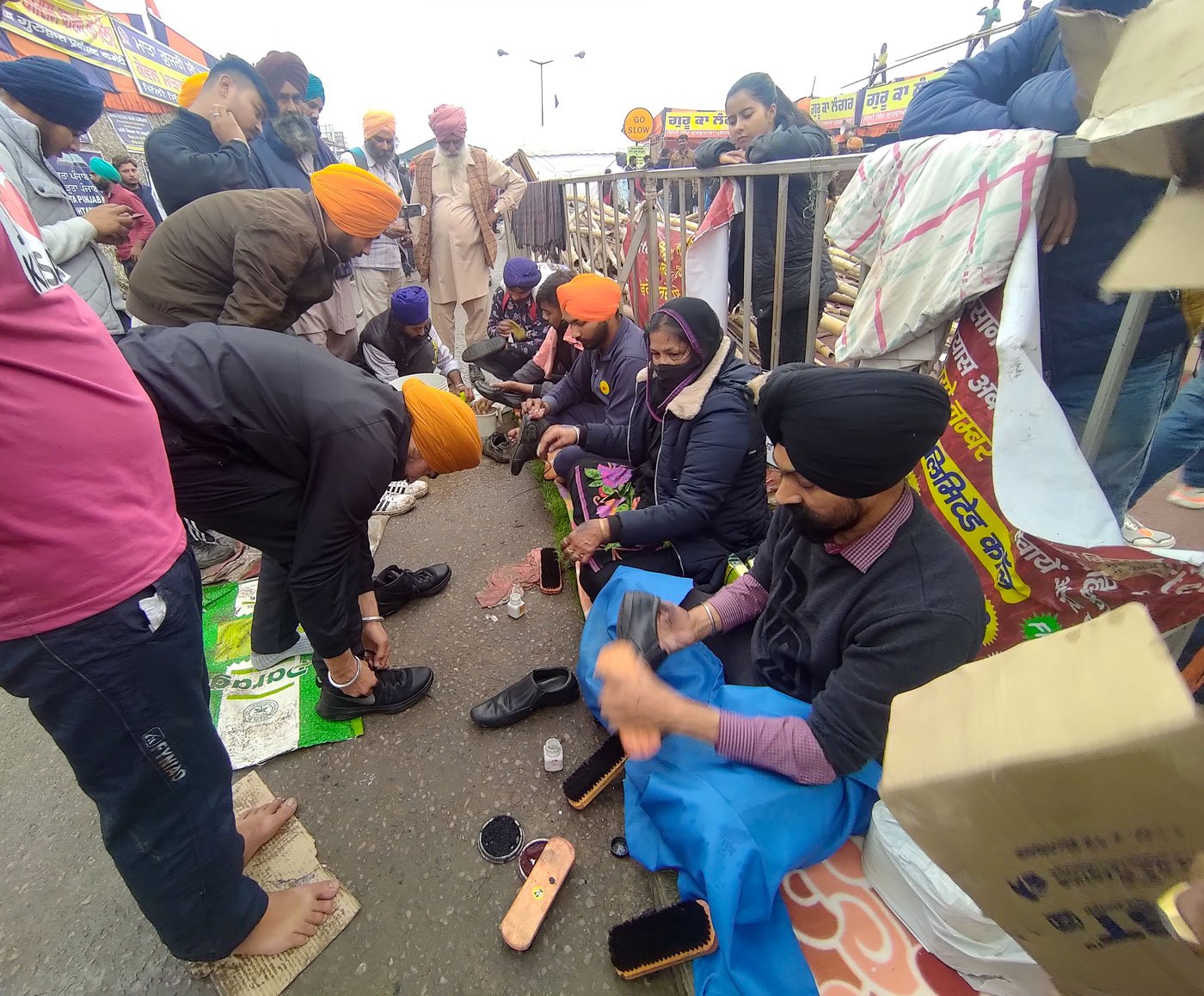 These are the times that try people's soles

Unmindful of the dust, dirt and occasional rain, Jaswinder Singh Saini and Prakash Kaur, a couple from Delhi, perform sewa at Singhu – cleaning the dirty, muddied shoes of the farmers

A chill winter wind is blowing. Rain has turned the dust on the road into mud. Water has accumulated in some stretches of a narrow passage that opens up to the protest site at Singhu. People cannot avoid walking through the wet patches – and their shoes and sandals get wrapped in mud.

As they cross the stage of the Samyukta Kisan Morcha, the collective of different farmers’ unions at the Singhu protest site on the Haryana-Delhi border, they find some relief. About a 100 metres ahead, Jaswinder Singh Saini and Prakash Kaur are at their service, cleaning and polishing shoes.

“The day we were blessed with our child in 1986, I decided to dedicate myself to humanity,” says Jaswinder, 62, a businessman who exports handicraft items.

So for nearly 35 years, the couple gas been going to gurudwaras to serve, particularly bv cleaning the shoes of worshippers. Their four-member family, now living in Delhi, owns 20 acres of land in Naraingarh in Haryana’s Ambala district.

Speaking of their decades as dedicated sewadars (volunteers for service at gurudwaras or community events), Jaswinder says, “My wife, my partner, has served way more than what one could imagine.” As he speaks, Prakash, who is in her 50s, continues brushing a pair of shoes.

Their helping hands are among countless forms of free sewa – service to humanity – on offer at the gates of Delhi. These are now services in solidarity too, from the farmers themselves and from other volunteers like the Sainis.

At Singhu and other protest sites around Delhi, lakhs of cultivators are protesting against the three farm laws first passed as ordinances on June 5, 2020, then introduced as farm bills in Parliament on September 14, and then hastened into Acts by the 20th of that month. The three laws are the Farmers (Empowerment and Protection) Agreement on Price Assurance and Farm Services Act, 2020 , the Farmers’ Produce Trade and Commerce (Promotion and Facilitation) Act, 2020 and the Essential Commodities (Amendment) Act, 2020 .

The anger over these laws has seen the protesting farmers camping at the gates of the capital city for two months now. And they have shown an astonishing capacity for self-regulation, rejecting state offers of help – and feed and look after themselves in one of the coldest periods in recent years. At such a time, the many forms of sewa here are invaluable. 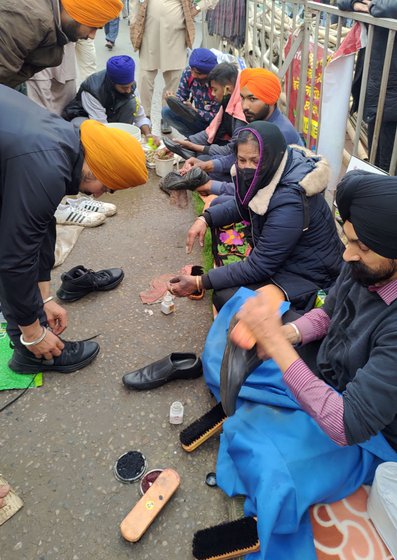 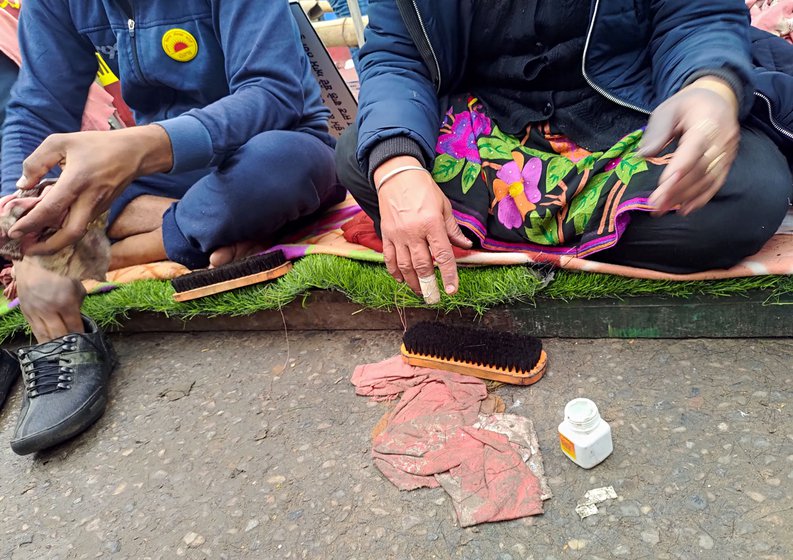 'I cannot usually sit for one hour straight. But once we come here, I clean shoes for six hours and feel no pain while doing so,' says Jaswinder, who suffers from chronic back pain. 'I am a daughter of farmers. I cannot see them in pain. I polish their shoes', says Prakash

“Everyone is serving people with something or the other – langars , medical care, tents, raincoats and more. We are serving them with what we have been doing for more than three decades and know best,” says Jaswinder.

“I am a daughter of farmers. I cannot see them in pain,” says Prakash, whose parents’ family is from Kurukshetra in Haryana. “I polish their shoes.”

“I cannot usually sit for one hour straight,” adds Jaswinder, who suffers from chronic back pain. “But once we come here, I clean shoes for six hours and feel no pain while doing so.”

Jaswinder keeps asking people passing by to give him their shoes, some of them are initially hesitant and shy – “O , give the pair here. They will shine. O, give them to me!”

He calls out to an elderly farmer who is undecided: “Babaji, lao ji lao, koi gal nahi ji [Babaji, bring them to me, there is no problem at all].” The elderly gentleman leaves with his shoes well-polished and shining.

“You are a human being, I am a human being, too. Why wear dirty shoes?” Jaswinder asks other passers-by. When, convinced, they take off their shoes and hand them over, Jaswinder and Prakash exchange a smile at this small success.

A few farmers also join them in offering this sewa. There are also at Sinhgu two young men and other elderly people from Punjab who too are cleaning shoes as their symbolic offering of solidarity. 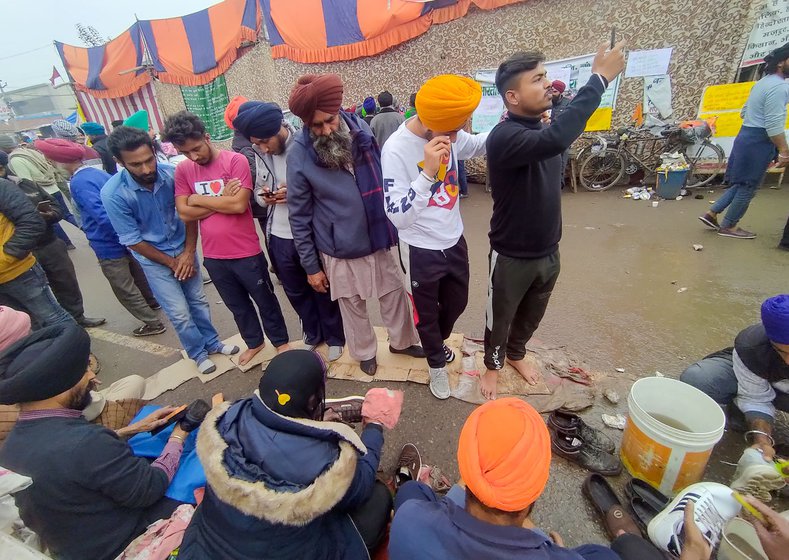 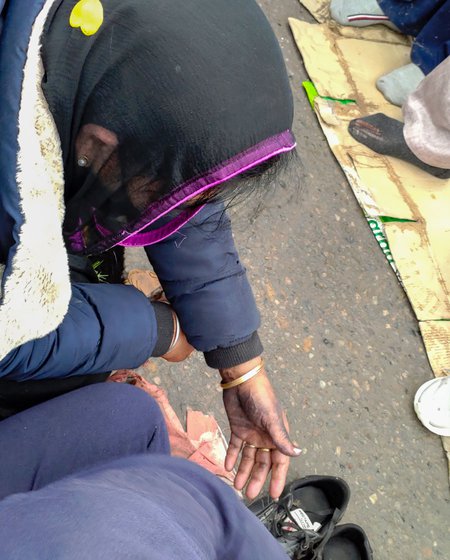 Their helping hands are among countless forms of free sewa – service to humanity – on offer at the gates of Delhi. These are now services in solidarity too, from the farmers themselves and from other volunteers like the Sainis

Jaswinder, who sees himself as both a businessman and a farmer, says, “With moves such as demonetisation, GST [the Goods and Services Tax] and giveaways to big business, the government has proved that it only cares for large corporate houses.

“Vijay Mallya, Nirav Modi and others fled the country as fugitives and now three laws are framed for the Ambanis and Adanis to take over our lives,” he adds. “The government does not care for humanity. We farmers, we do care.”

“After we die, does our money go with us to the final destination? No. Only deeds travel. Hence sewa ,” says Prakash.

“And Guru Gobind Singh taught us that if any atrocity is being committed against anyone, we should resist that. If we are wronged, we should fight against it. The farmers’ protest is a fight against oppression.”

While the shoes are being cleaned, those who have deposited them there stand on flattened-out cardboard cartons which protect their feet from the mud. While returning each pair of polished shoes to its owner, Jaswinder and Prakash bow their heads in respect.