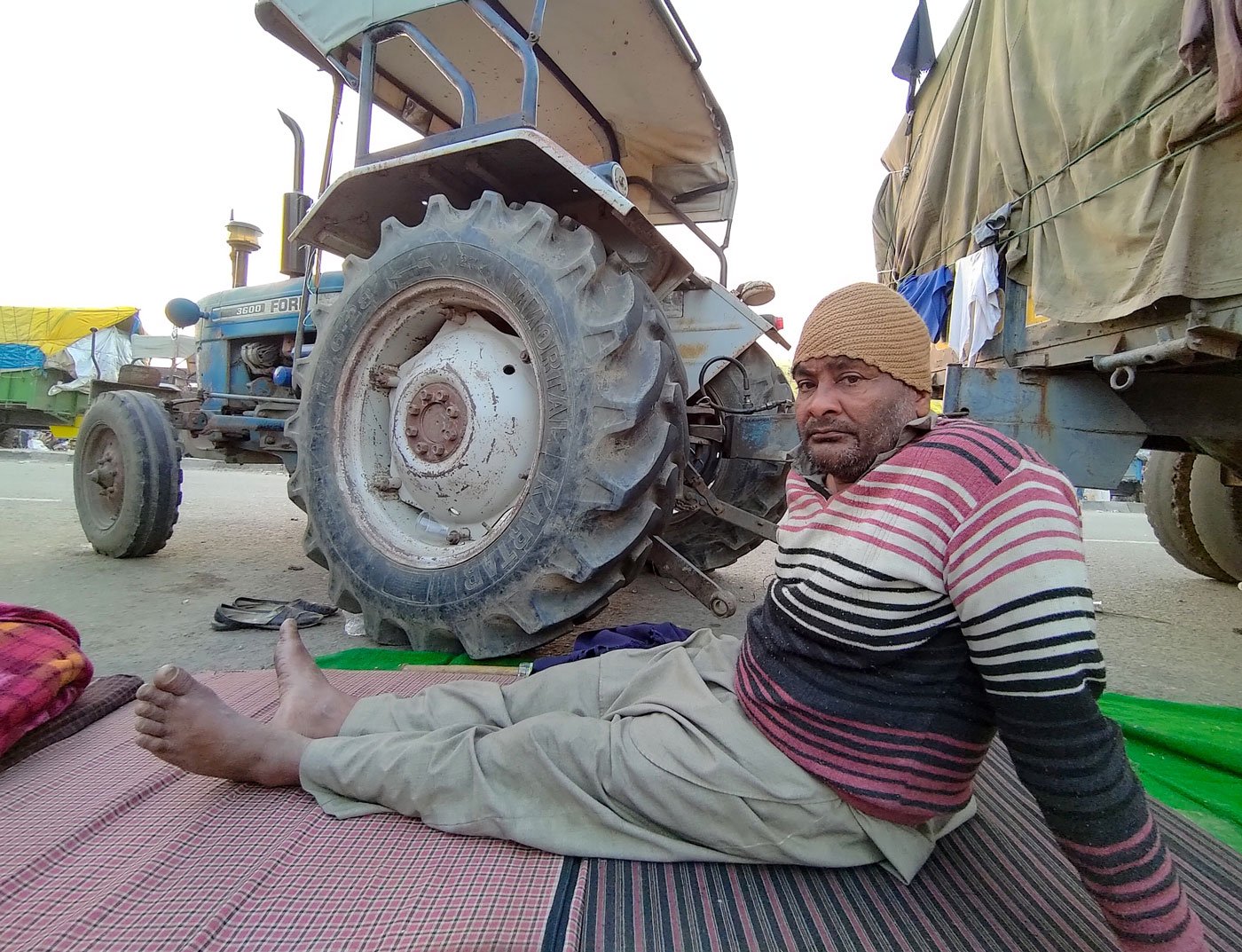 Many of the farmers at the Delhi-Haryana border in Singhu have come from hundreds of kilometres away, braving great difficulties. Among them is Harjeet Singh, who travelled with a broken hip and an injured spine

The hazy winter light shifts across Harjeet Singh’s face as he sits watching the sea of protesting farmers at the Singhu-Delhi border in Haryana’s Sonipat district.

Nearby, the elderly and the young – men, women as well as children – all have busied themselves in various tasks. Two men are cleaning mattresses, whacking them with lathis, preparing for the night. A few are distributing tea and biscuits to passers-by. Many are on their way to the front of this huge congregation to listen to their leaders’ speeches. Some are making arrangements for dinner. Others appear to be simply roaming about here and there.

Harjeet is among the tens of thousands of farmers at the gates of Delhi protesting against the three farm laws rammed through Parliament in September this year.

Rice and wheat, he says, were the crops he used to cultivate on his four acres of land in Majri Sodhian village of Punjab’s Fatehgarh Sahib district. Harjeet, who is in his 50s, is unmarried and lives with his mother.

An accident he suffered in 2017 left Harjeet unable to walk, though it has not deterred him from joining the massive protests with his fellow farmers.  “I was working on the roof of my house when I fell,” he says of the accident. “I broke my hip bone.” 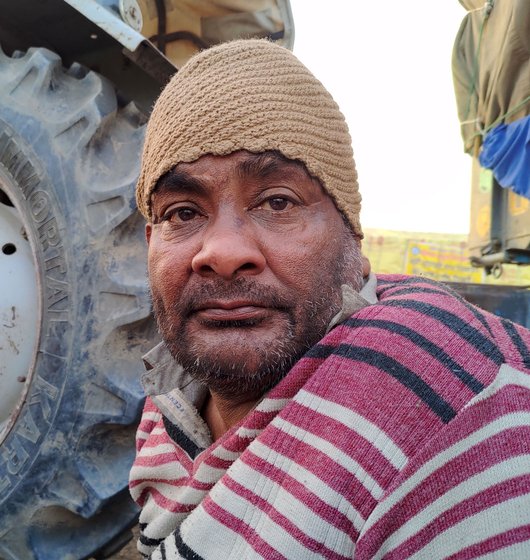 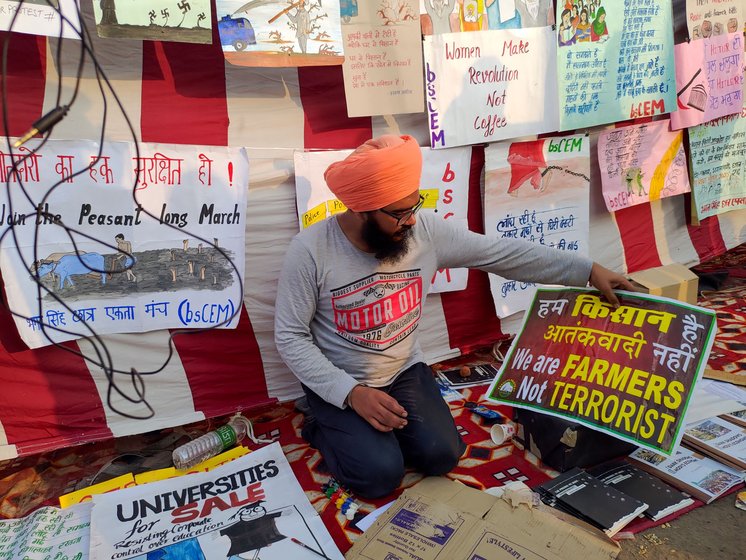 Harjeet Singh, despite being unable to walk, travelled 250 kilometres to Singhu in a truck-trolley. Right: A farmer making placards at the protest site

There was not much he could do about it. “Apart from the initial first aid, I could not get myself properly treated because the hospitals were asking for 2 to 3 lakh rupees. Where do I get that kind of money from?”

So how is he managing to participate here? How does he stand up at the rallies and speeches?

“You see the wheel of this tractor here? I clutch that with one hand and hold a danda [stick] in the other, and then stand. Sometimes I seek support from someone or lean on a wall. Using the danda, I try to keep standing,” he says.

“I came to the protest because I could not bear the pain my people are going through for all of us,” he says. "I travelled about 250 kilometres in a truck-trolley.” Other farmers helped him reach the protest site. His own pain, Harjeet adds, is nothing compared to what many in the huge collective of kisans here have borne.

Dismantling the road blockades and barbed wire, facing tear gas shelling and water cannons, being beaten up by the police, trying to cross the trenches on the roads – he’s watched the kisans take on all of that and more.

“The sufferings we foresee are even greater,” says Harjeet. His friend Kesar Singh, also a farmer, nods in silent assent.

Our leaders, he informs me, are saying, “The corporates like Adanis and Ambanis will take away our rights over our own land. I believe they are correct.” 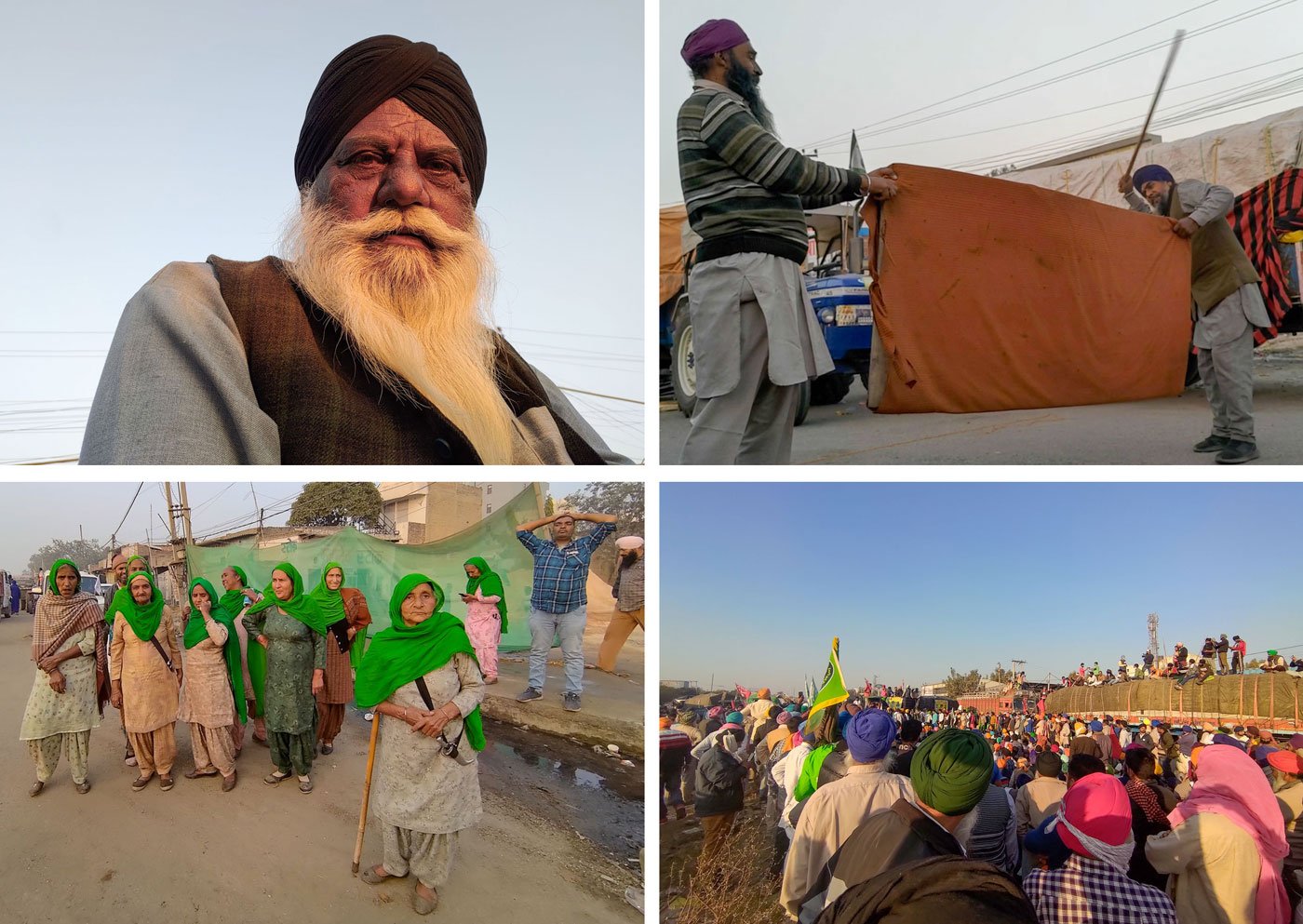 Top left: A farmer from Majri Sodhian village looks on as we speak to other protestors. Top right: Two men beat the dust out of a mattress with a lathi. Bottom left: A group of women farmers from Punjab's Sangrur district at the Singhu border. Bottom right: A large gathering listens intently to a speech by a protest leader

Harjeet leased out his four acres to another farmer after his accident, unable to cultivate the land himself. He has seen what happens, he says, when his land is farmed by someone else: “I bore an instant loss.”

“There is a crack in my spine, too,” Harjeet says. “It is similar to the cracks you might sometimes see in a glass tumbler,” adds his friend Kesar.

Yet, he’s made it all the way here to the Delhi border. An injured spine, but far from spineless. Harjeet Singh may not be able to walk, but he stands tall against the farm laws.

Amir Malik is an independent journalist. He tweets at @_amirmalik.