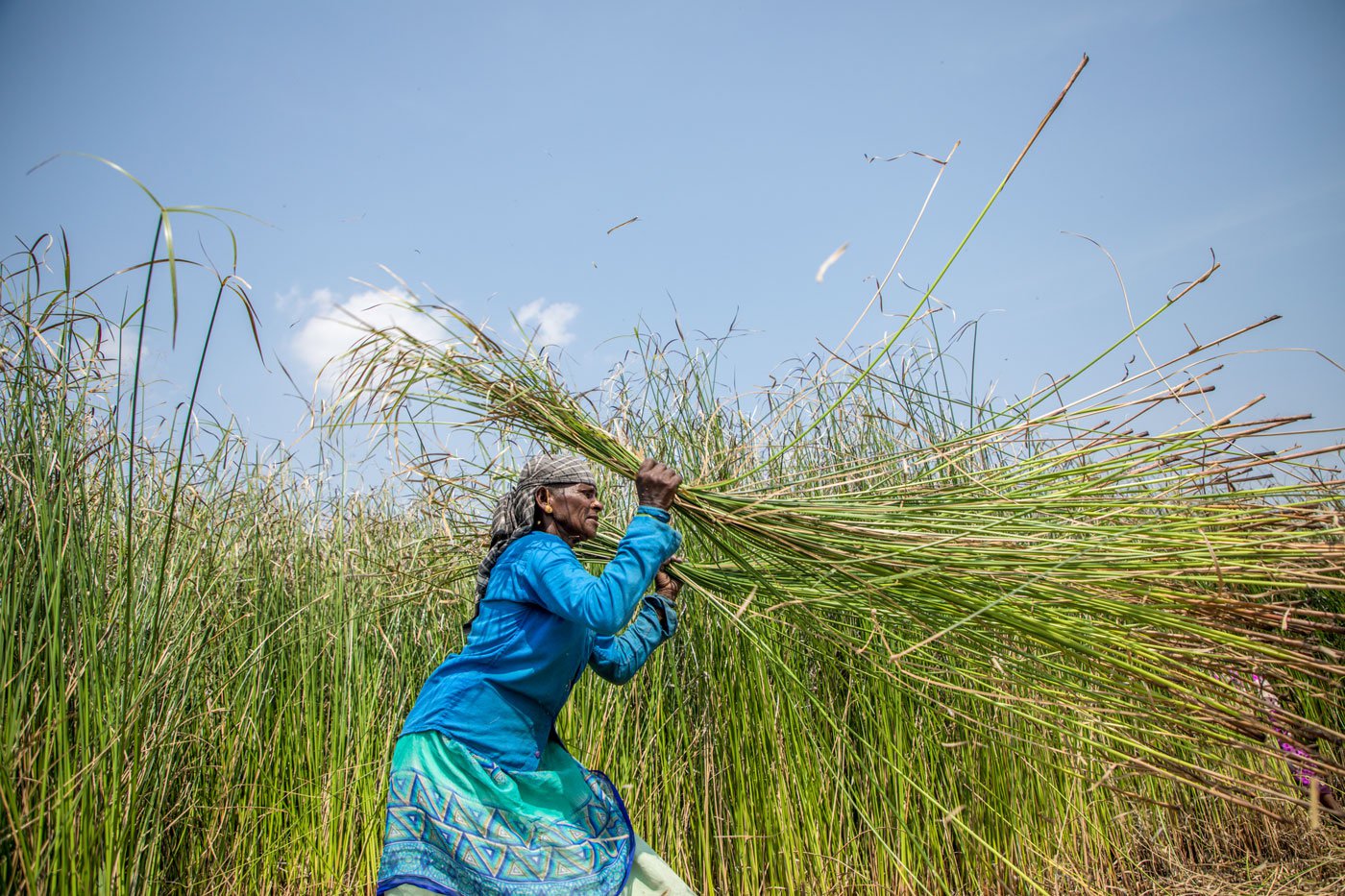 'These korai fields are my second home'

On the banks of the Cauvery in Tamil Nadu's Karur district, women have been cutting korai for decades to earn a living and feed their families. The work is hard, the toll on their health high

It takes the highly skilled korai cutters less than 15 seconds to cut the plant, half a minute to shake it out, and another few minutes to make a bundle of it. The grass-like plant is taller than them, and each bundle weighs nearly five kilos. The women make it look effortless, carrying 12-15 over their heads at a time and walking about half a kilometre under the hot sun – all just to earn Rs. 2 a bundle.

By the end of the day, each of them makes at least 150 bundles of korai , which grows abundantly in the riverine fields of Tamil Nadu’s Karur district.

On the banks of the Cauvery river, in Nathamedu, a hamlet in Karur’s Manavasi village, the korai cutters – almost all of them women – work for eight hours a day with hardly a break. They bend to cut through the dense foliage, thresh the stalks with their bare hands and make the bundles, which they drop off at the collection point. It takes skill and strength. And it’s hard work.

Most of them, they say, have been cutting korai since they were girls. “From the day I was born, the korai kadu [‘jungle’] has been my world. I began working in the fields when I was 10 years old, earning three rupees a day,” says 59-year-old A. Sowbhagyam. Her income feeds her family of five now.

M. Mageswari, 33, a widow with two school-going sons, remembers her father sending her out to herd cows and cut korai . “I haven’t even stepped into a school,” she says. “These fields are my second home.” R. Selvi, 39, followed in her mother’s footsteps. “She was also a korai cutter. I began to do this work very early in my life,” she says.

The women, who belong to the Mutharaiyar community – listed as a Backward Class in Tamil Nadu, are all from Amoor in Tiruchirappalli district. The village in Musiri taluk , 30 kilometres from Nathamedu, is also on the banks of the Cauvery. But water has become scarce in Amoor, mainly because of sand mining in the area. “ Korai grows in my village when there is some water in the [river] canal. Lately, because the river has had little water, we have to travel a long way for work,” says Mageswari.

So the residents of Amoor travel to the irrigated fields of neighbouring Karur district. They get there by bus, sometimes by lorry, paying their own way, to earn about Rs. 300 a day. V.M. Kannan, 47, who cuts korai along with his wife K. Akkandi, 42, points out the irony: “Cauvery water is sucked up for others, while the locals struggle to find any.” 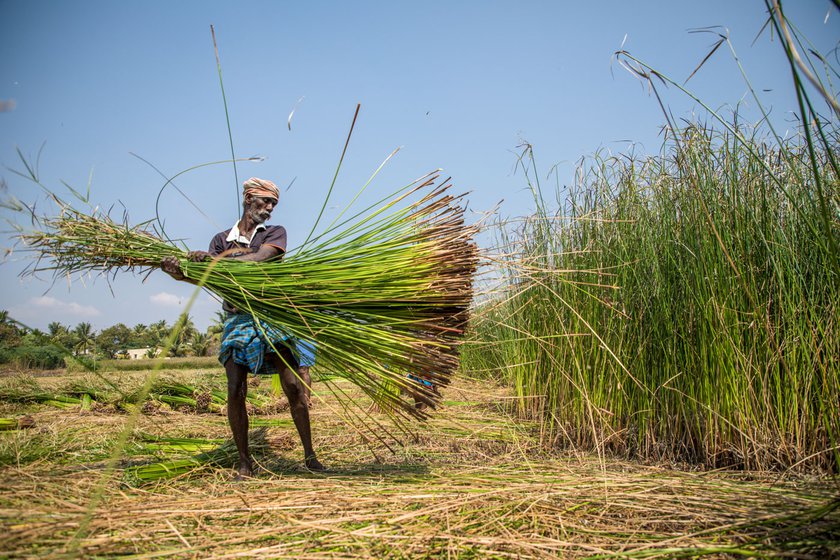 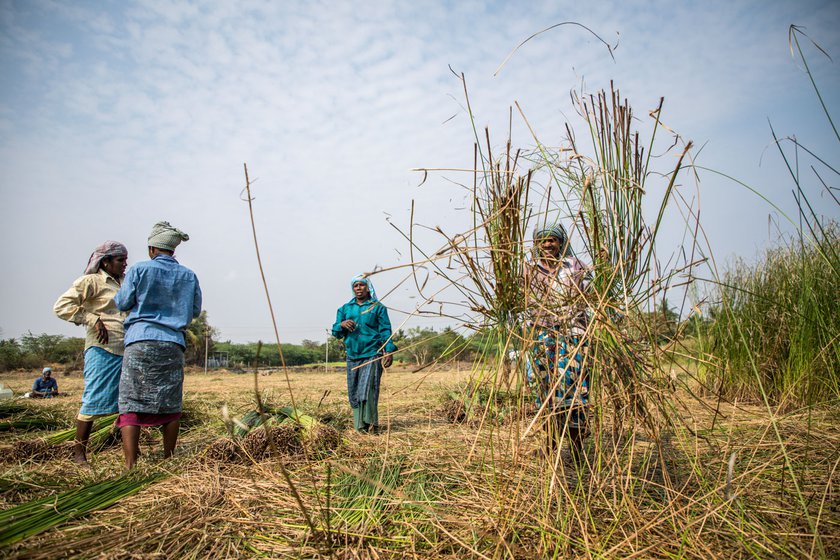 Left: V.M. Kannan (left) and his wife, K. Akkandi (right, threshing), work together in the korai fields. Most of the korai cutters from Amoor are women

Korai is a type of sedge of the Cyperaceae family; it grows to roughly six feet in height. It is commercially cultivated in Karur district for the korai mat-weaving industry in Musiri, a manufacturing centre of the popular pai (mat) and other products.

The industry runs on the labour of the workers in the fields. Earning Rs. 300 a day is not easy for the women, who start work at 6 a.m., artfully cutting the tall plant with a sickle, their back bent. They work all round the year except a few days during the monsoon.

The work is demanding, says 44-year-old Jayanthi. “I get up at four every morning, cook for the family, rush to catch the bus to get to the field to work. The money I make here has to pay for bus fare, food and running the house.”

“But what choice do I have? This is the only work available to me,” says Mageswari, whose husband died of a heart attack four years ago. “I have two sons, one in Class 9 and the other in Class 8,” she adds.

Almost all the women run their homes with the income from cutting korai . “If I go for two days without cutting this grass, there is nothing to eat at home,” says Selvi, who supports her family of four. 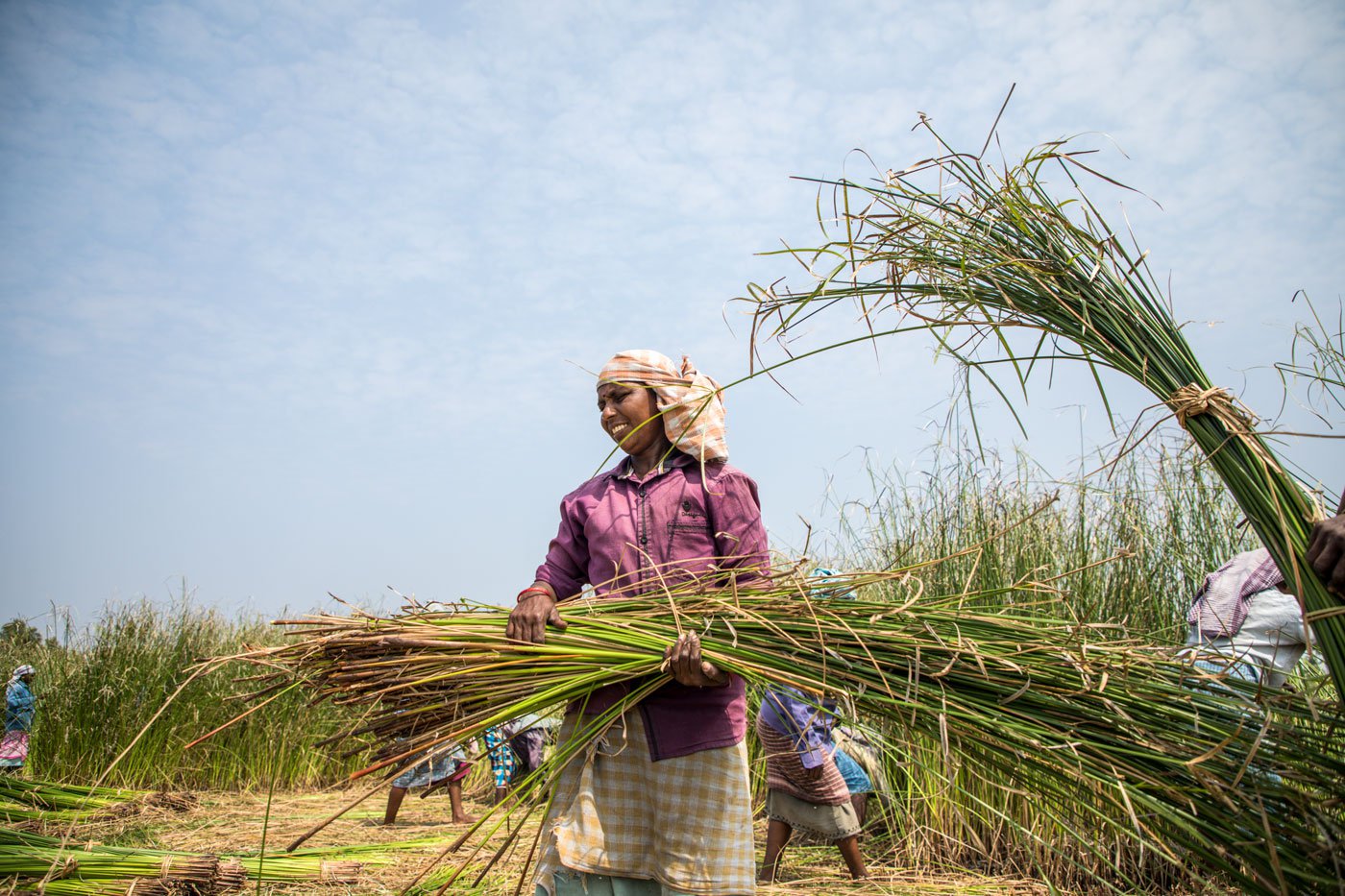 M. Jayanthi's chest hurts from bending and cutting the whole day. She spends a lot of her income on medical bills

But the money is not enough. “One of my younger daughters is studying to be a nurse, and my son is in Class 11. I don’t know how I will raise money for his education. I’m in debt paying for my daughter’s fees,” says Mariyayi.

It didn’t mean much when their income increased to Rs. 300 a day. “Earlier, when we took home 200 rupees, we could get a lot of vegetables. But now, even 300 is not enough,” says Sowbhagyam. Her household of five includes her mother, husband, son and daughter-in-law. “It is my income that feeds us all.”

Many of the families here depend entirely on the women’s incomes because the men struggle with alcoholism. “My son is a mason. He earns well, nearly 1000 rupees a day,” Sowbhagyam says. “But he does not give even five paise to his wife, and spends everything on alcohol. When his wife asks him, he beats her up badly." Her  My husband is very old, he’s unable to do any work.”

The hard life takes a toll on the women’s health. “Because I spend the whole day bending and cutting, I get a lot of chest pain,” says Jayanthi. “I end up going to the hospital every week, and the bill comes to 500-1,000 rupees. All that I earn seems to go towards medical expenses.”

“I can't do this for long,” an anguished Mariyayi says. She wants to stop cutting korai . “My shoulders, hips, chest, arms and legs ache. My hands and feet are scratched by the sharp edges of the plant. Do you know how uncomfortable that can be in this sun?” 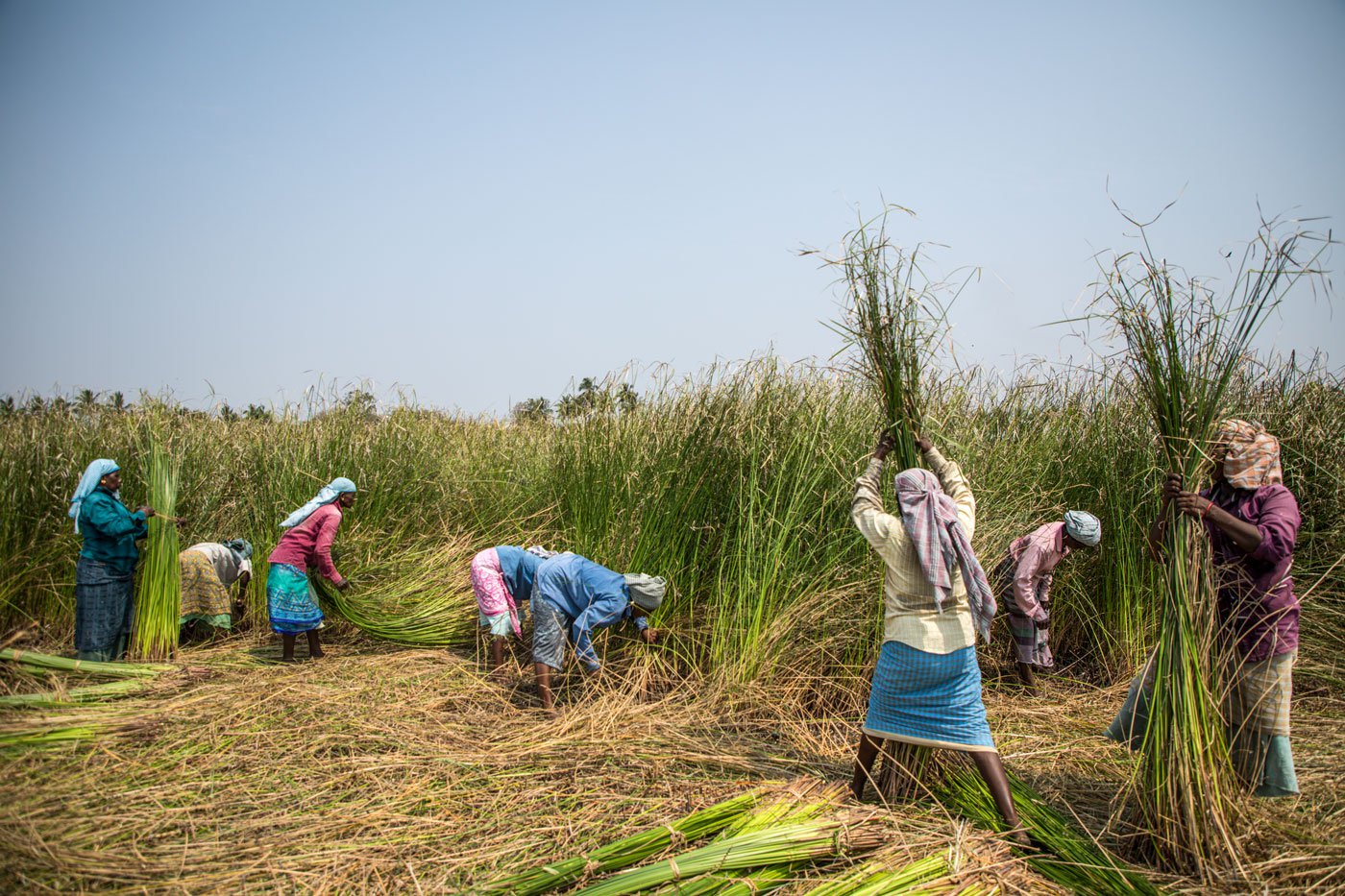 The women from Amoor, in Tiruchirappalli district’s Musiri taluk , travel to neighbouring Karur to earn an income from harvesting korai . The tall sedge, which resembles grass, grows in abundance in the riverine fields on the banks of the Cauvery in Tamil Nadu 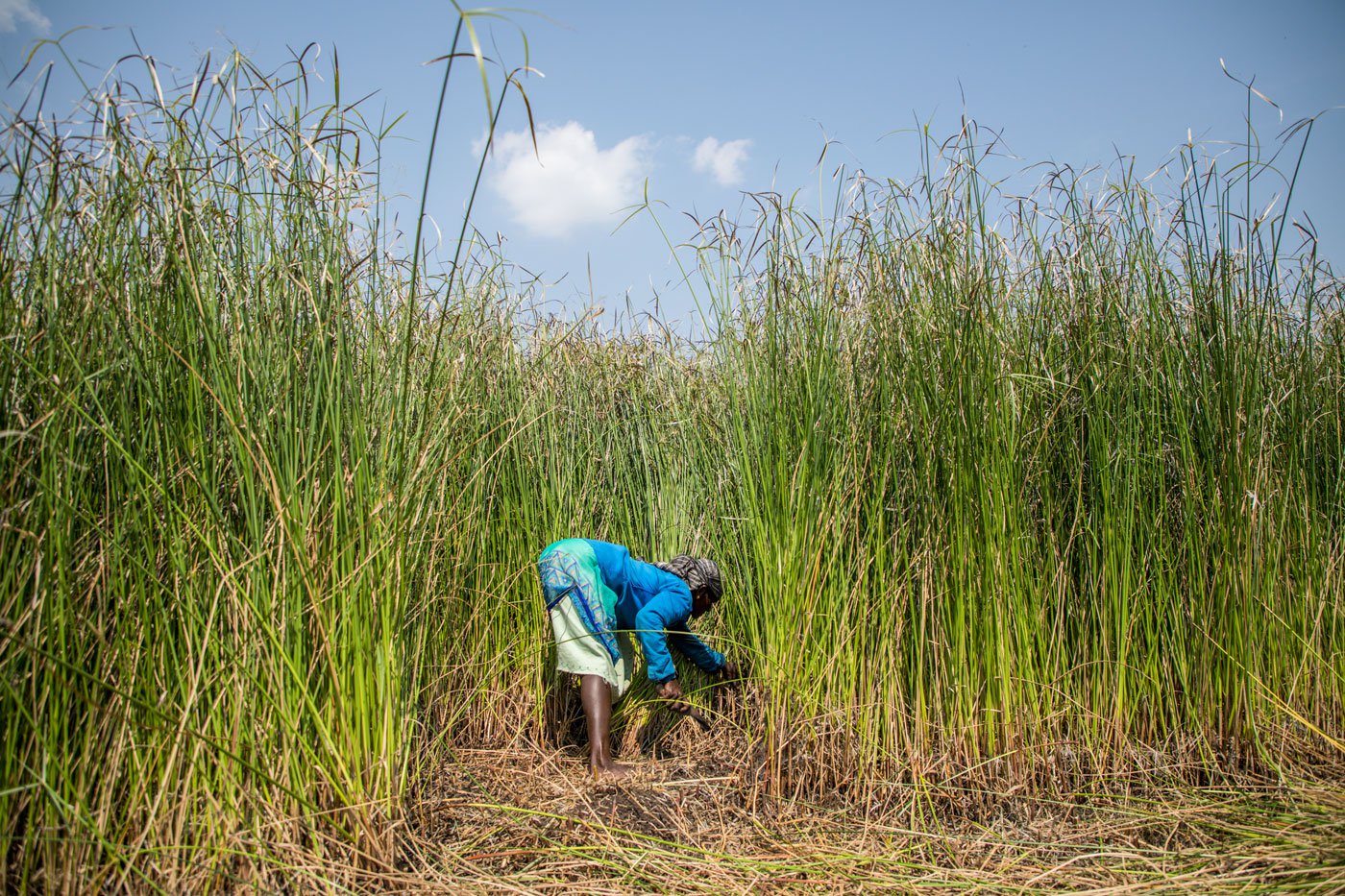 A. Mariyayi has been working in the korai fields for more than 30 years. Now, because her body aches, she struggles to bend and lift the stalks. Mariyayi has educated her five daughters and a son with her income, as well as arranged for the marriages of her three older daughters with the money earned from cutting korai 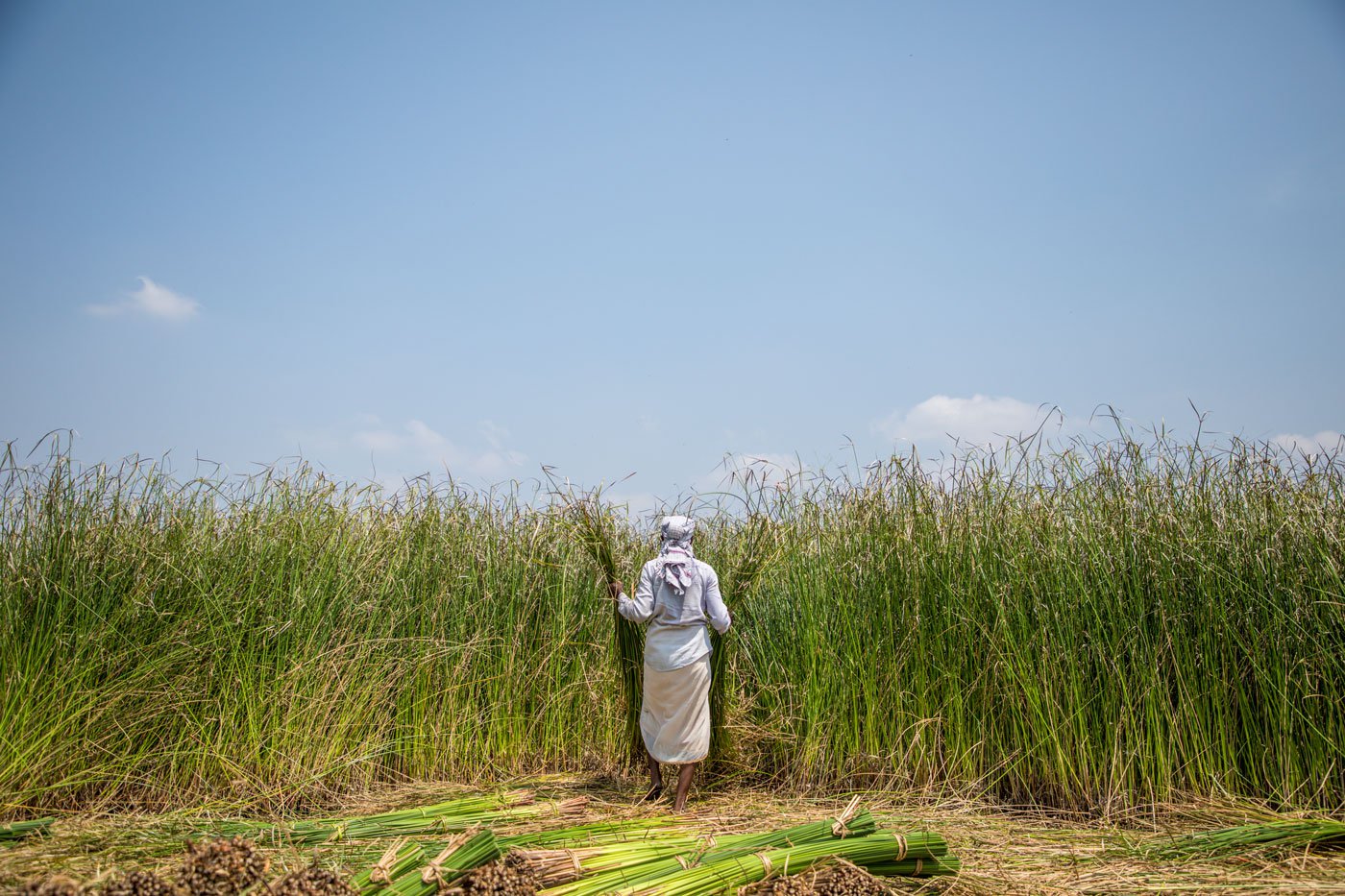 Life has always been hard for her, says M. Mageswari, a widow whose two sons are in high school. “I have never been to school. I regret it deeply. If I had an education, I could have done some work on the side.” She has been cutting korai from when she was a child 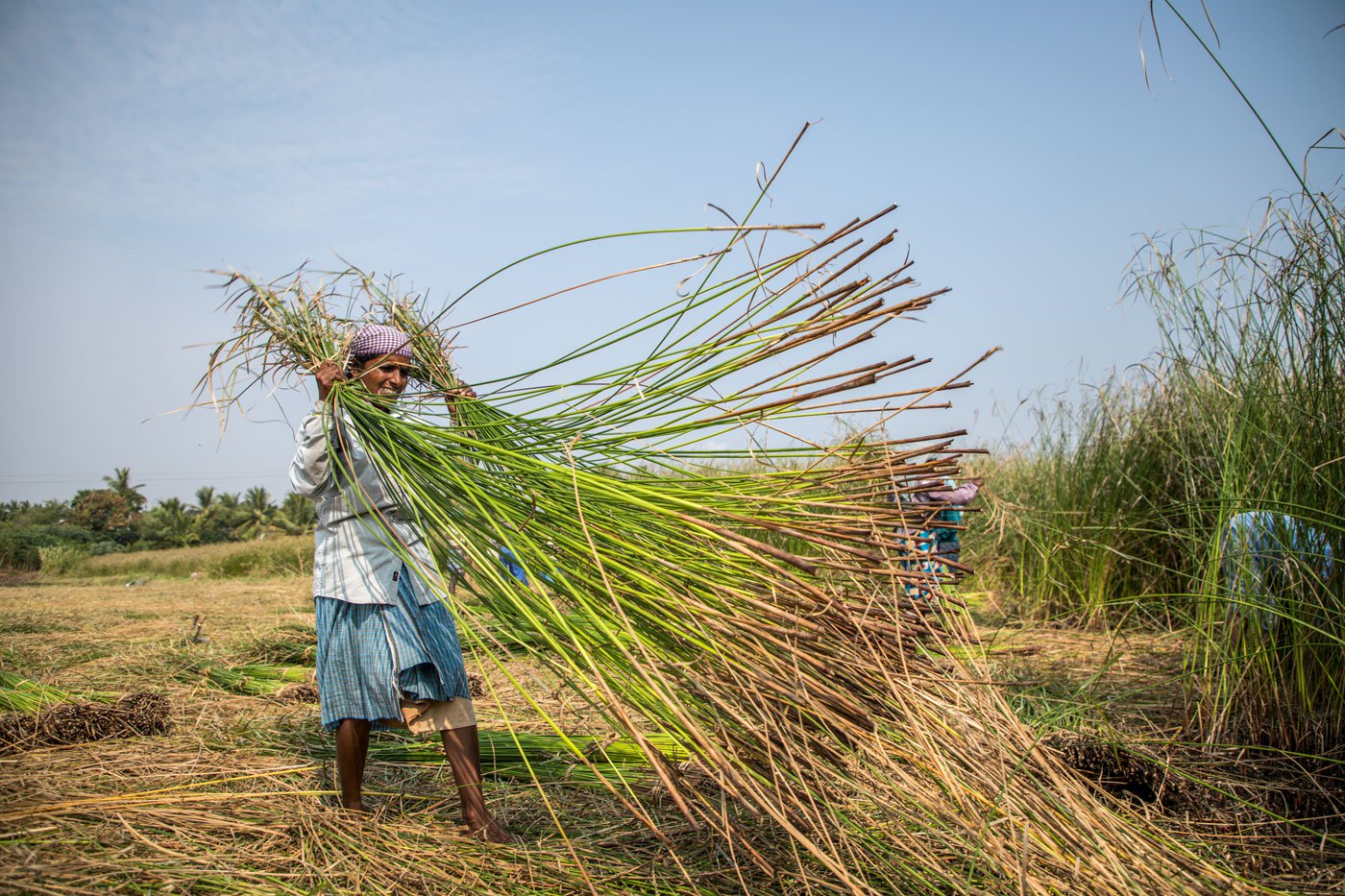 R. Selvi swings the stalks and threshes it to separate out the dried parts. Her income feeds her family of four. “Even when I earn 300 rupees, I get only 100 to run the house. My husband spends 200 on alcohol. If only the men in our homes did not drink, maybe life would be a little bit better,” she says 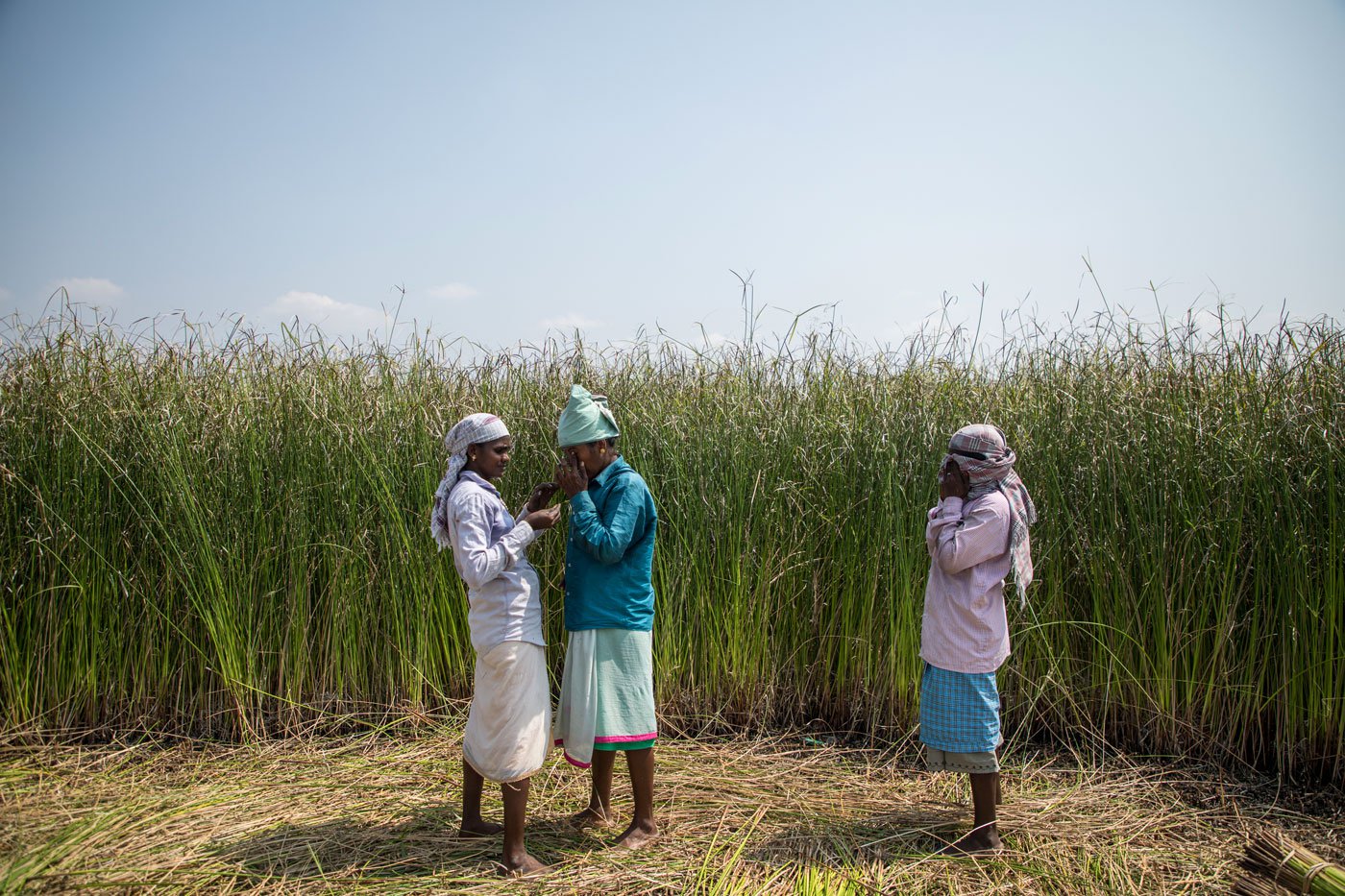 Mageswari (left) helps R. Kavita remove dust from her eyes, while S. Rani (right) tries to wipe away the dust from hers with a towel. The women suffer from constant eye irritation because of dust that rises up when they thresh the stalks 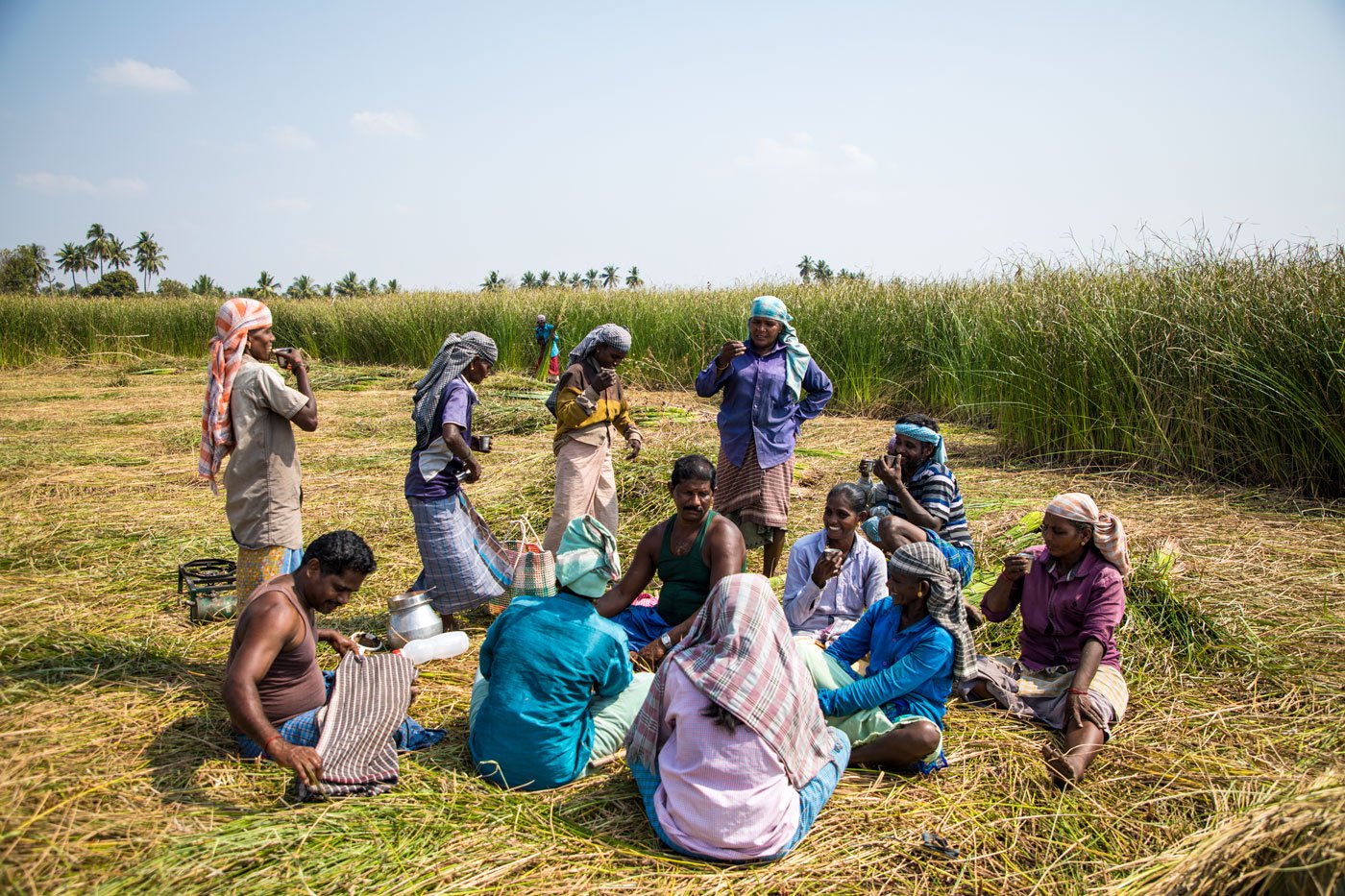 A short break of about 10 minutes is all that the workers get in their rigorous eight-hour work schedule, which begins at 6 a. m. There is no shade to sit in, so they gather under the sun to have some tea 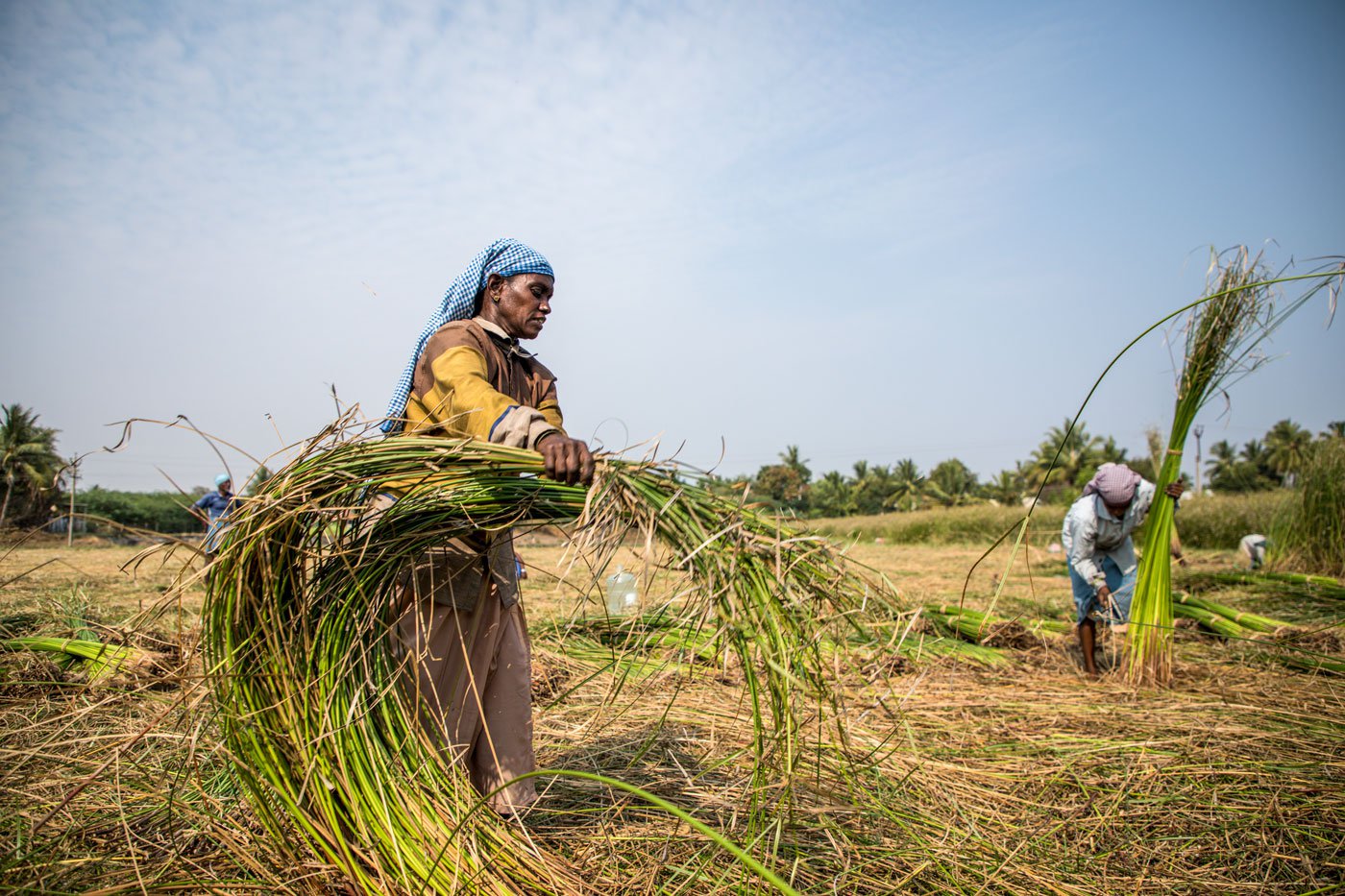 M. Nirmala prepares to swing and thresh a bundle of the cut korai . The bundles are sent to the processing units in Musiri in Tiruchirappalli district, a korai mat-weaving centre 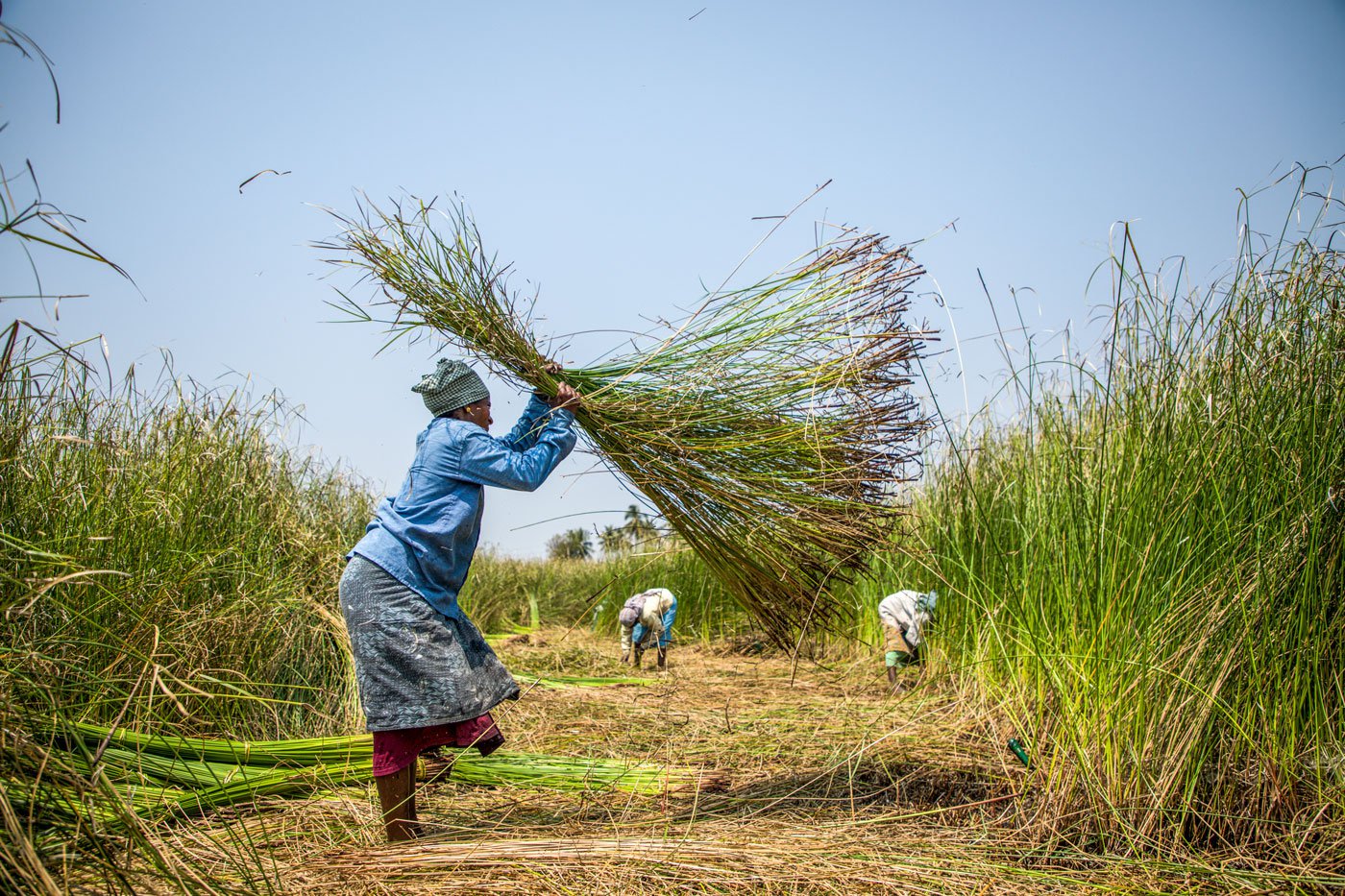 Kavita threshes a bundle with all her might. Getting rid of the dry parts from the stalks requires strength as well as skill. The experienced women cut exactly the amount needed to make a bundle 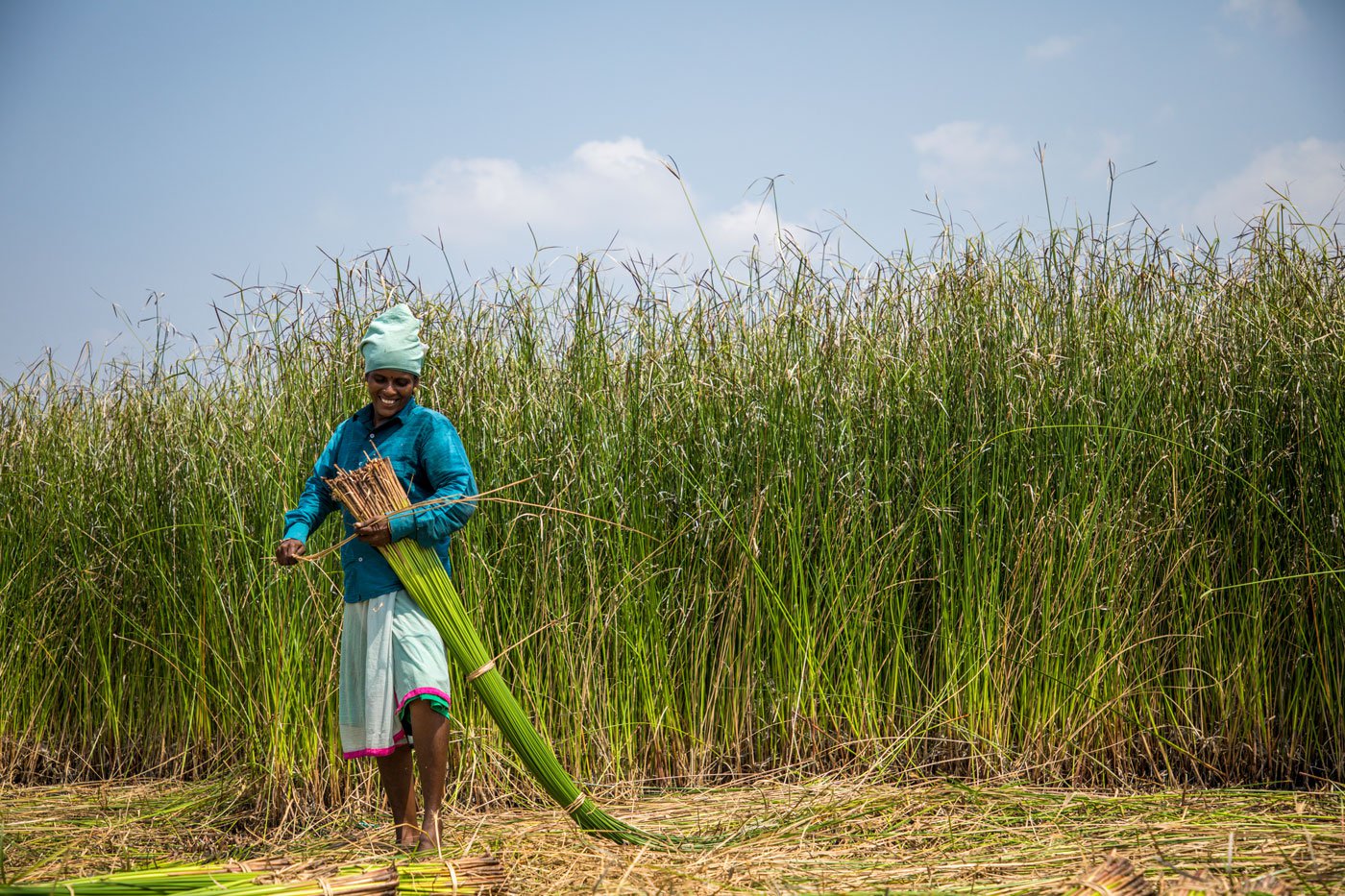 Always smiling and joking, Kavita makes the others laugh while working. She started harvesting korai after she got married 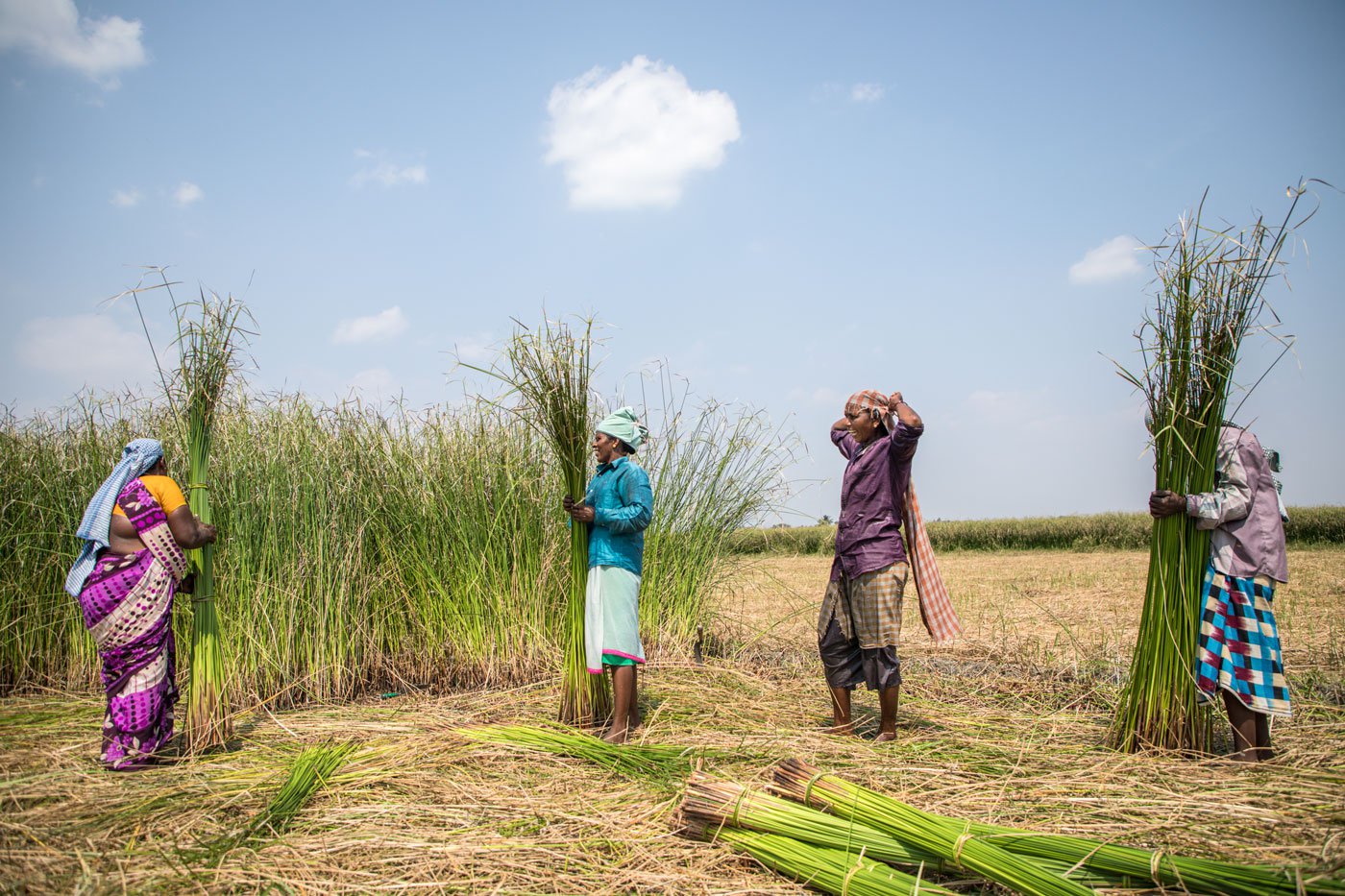 From left to right: S. Meghala, R. Kavita, M. Jayanthi and K. Akkandi work under the hot sun with hardly a break. In the summer months, they pour water on themselves to beat the heat and keep working 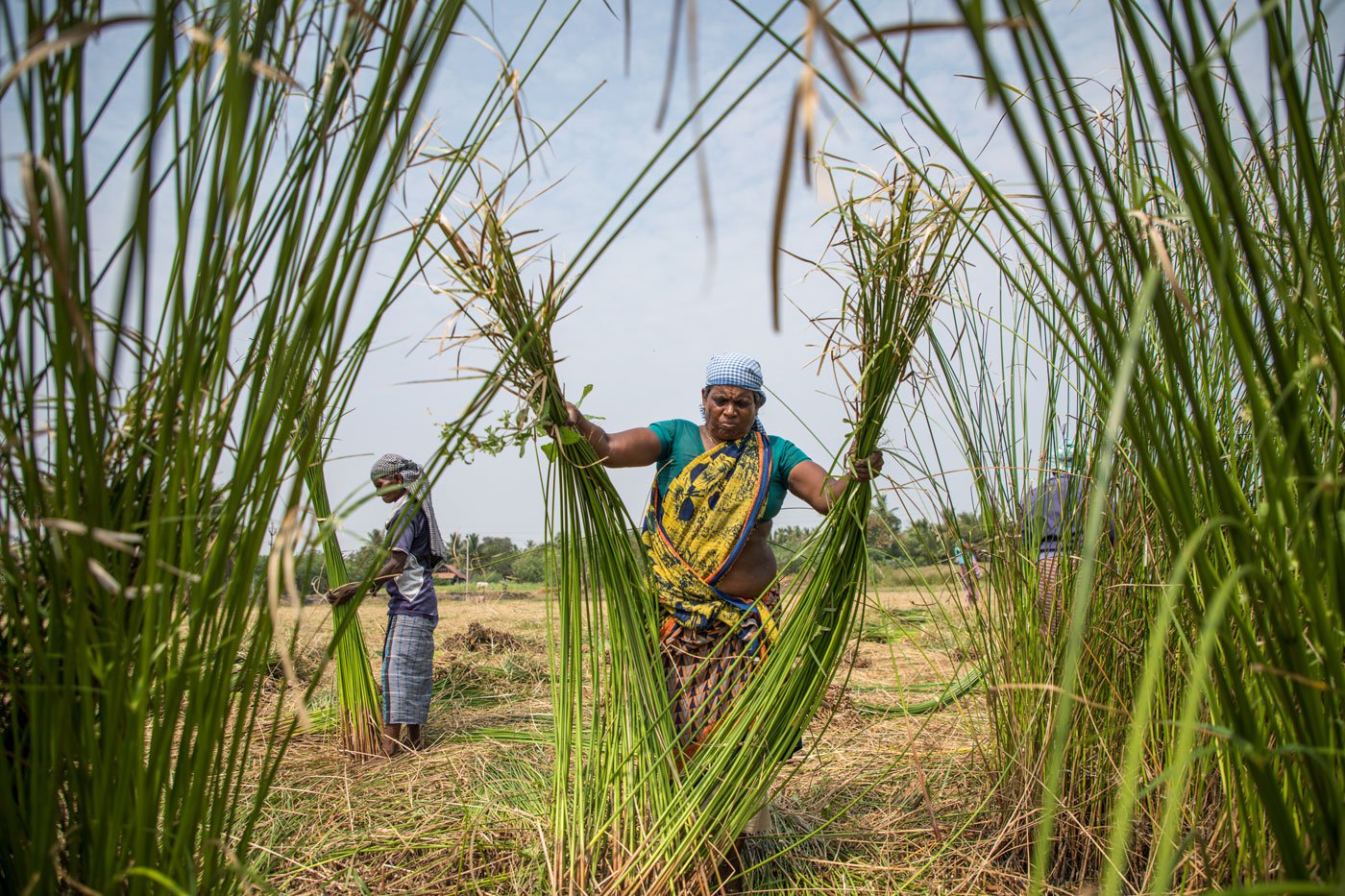 Meghala’s husband is bedridden, so she started harvesting korai to earn a living 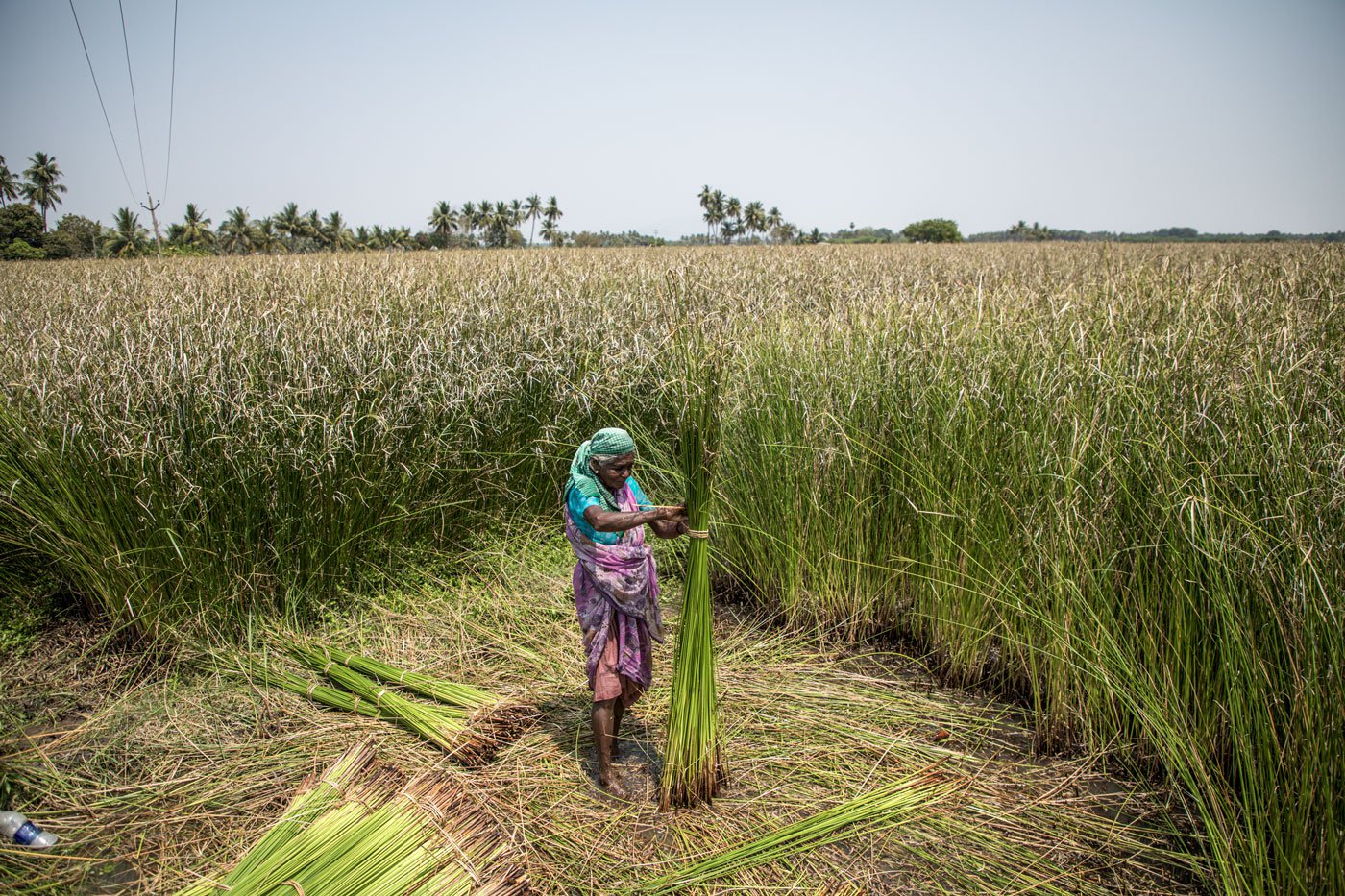 A. Kamatchi’s husband died more than 20 years ago, and her son in 2018. At 66, she lives alone and supports herself by working in the korai fields 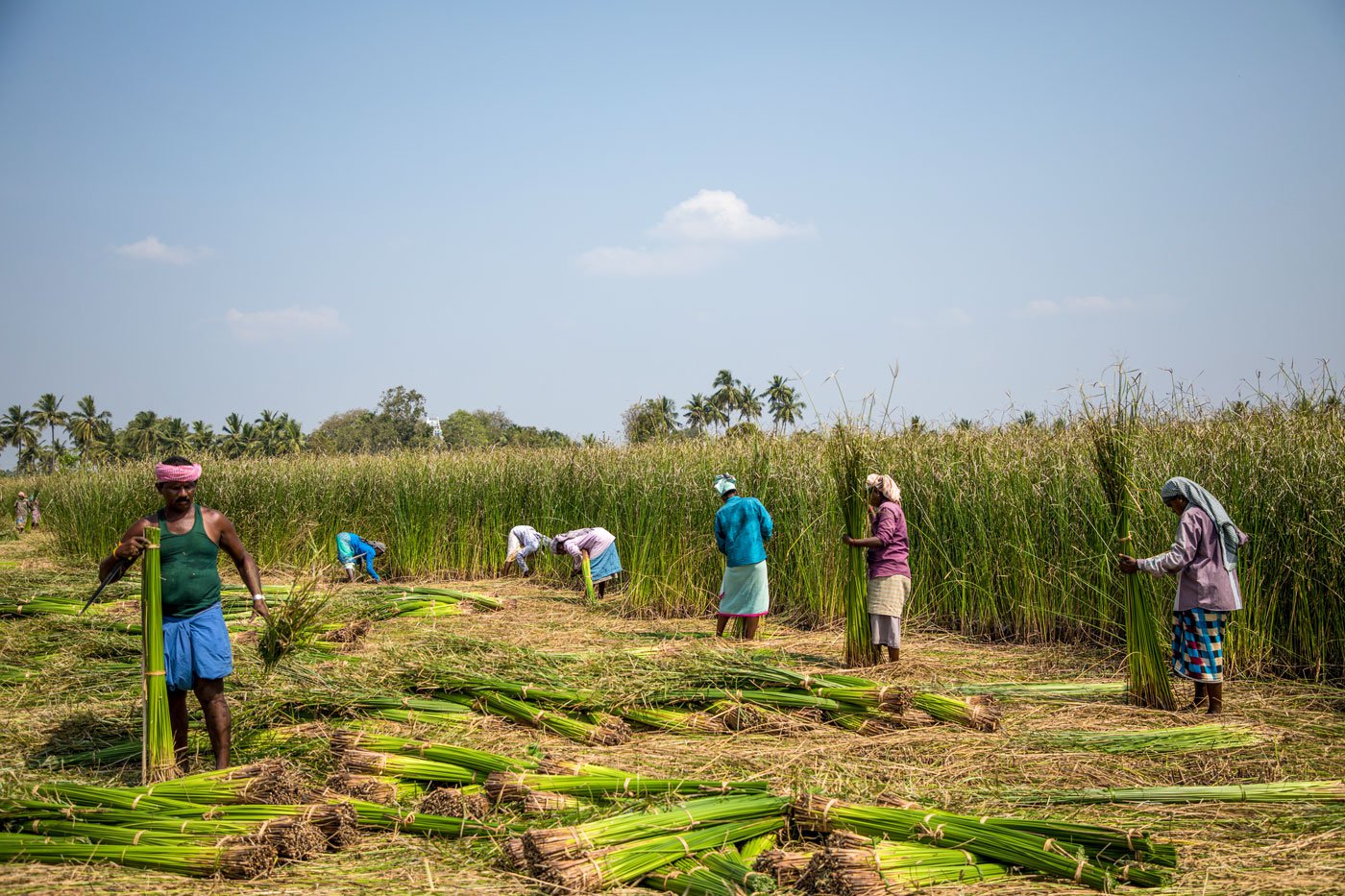 The workers level the bundles by tapping them hard on the ground. Contractor Mani (left) cuts off the top of the stalks to bring them to a uniform height 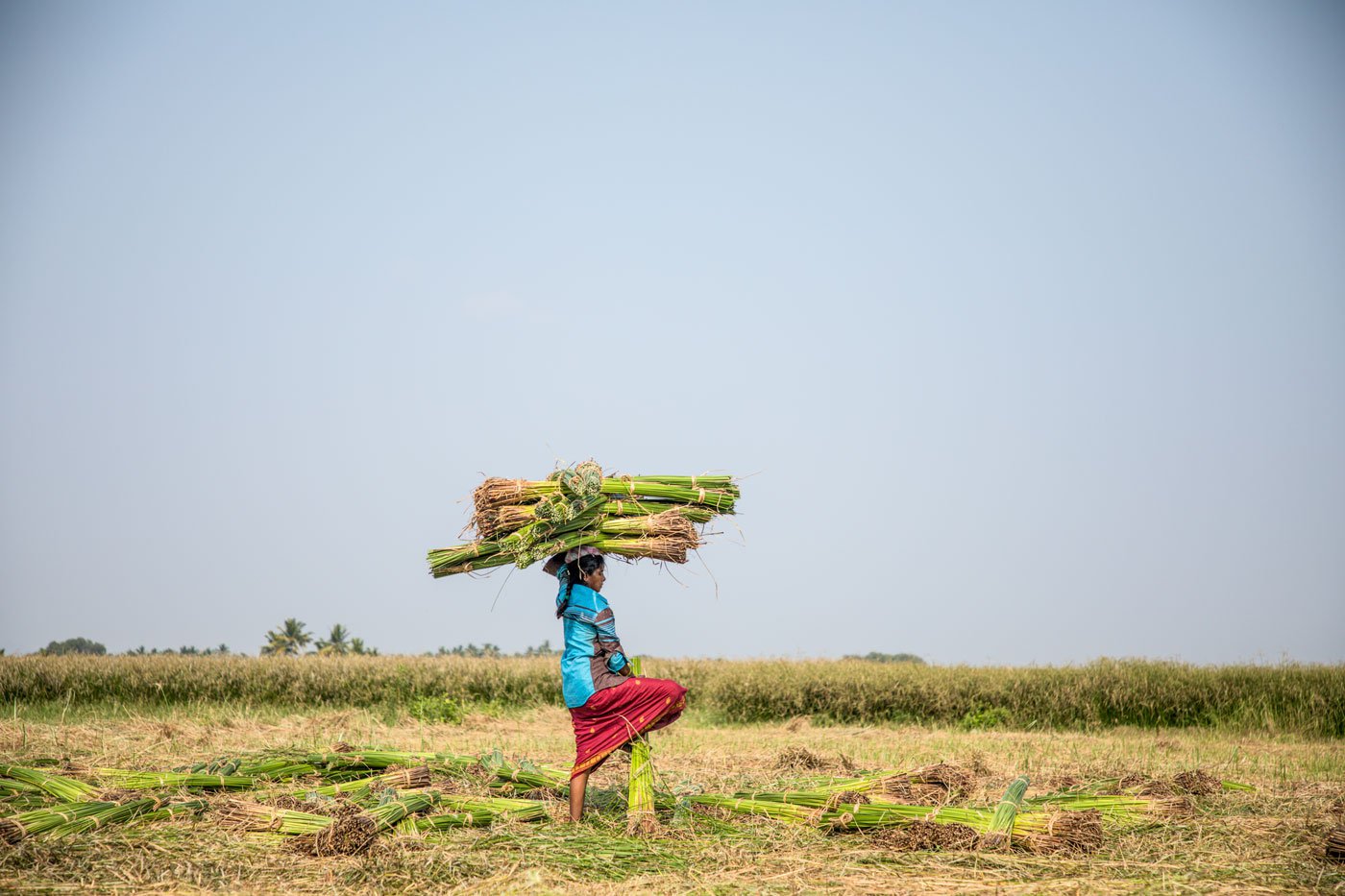 A. Vasantha expertly hoists a bundle using her legs and toes while balancing a stack on her head. She raises it up to her waist first and then on to her head – with no help. Each bundle weighs about five kilos 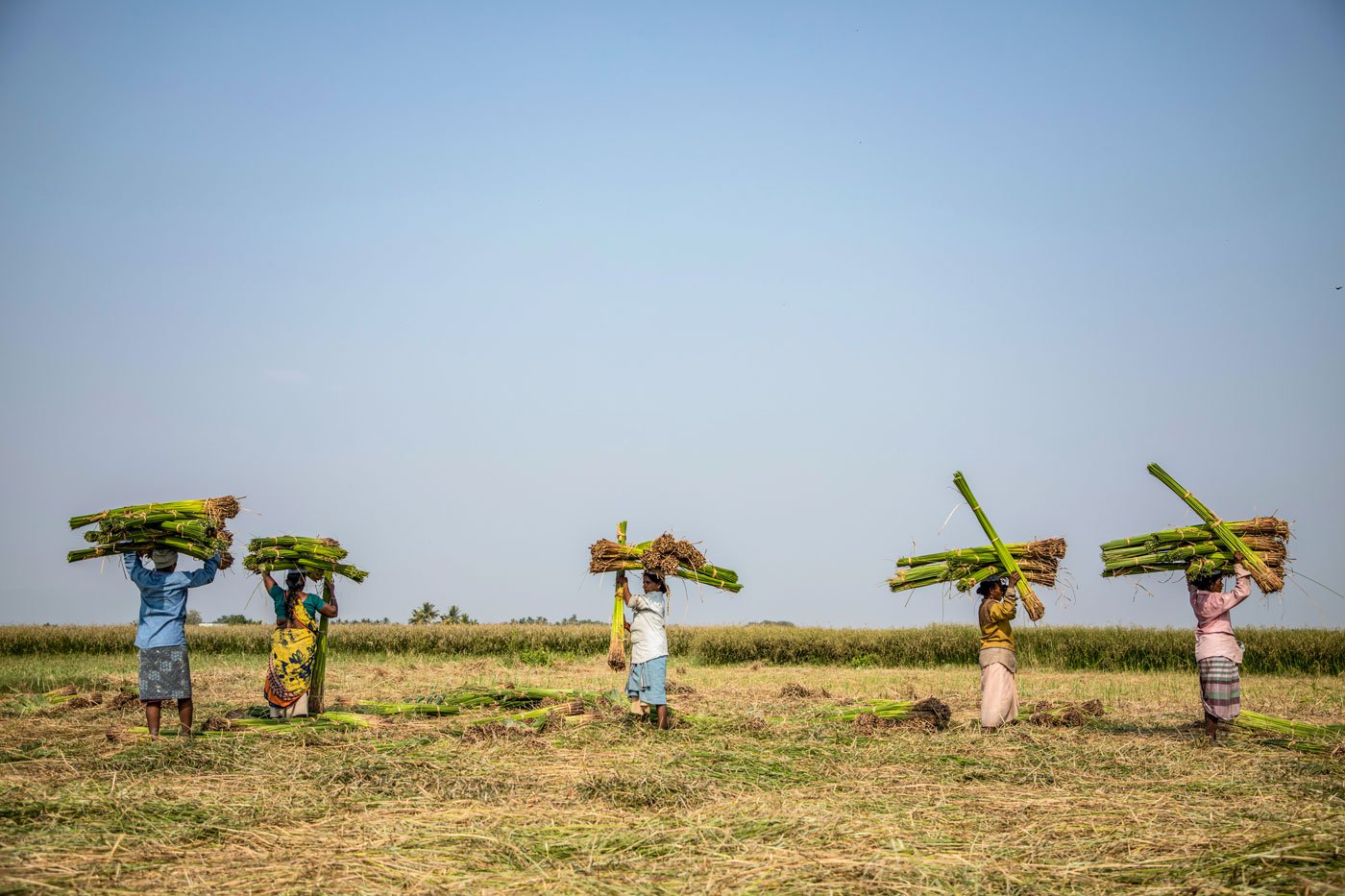 The women balance 10-12 bundles on their head at a time. They walk for about half a kilometre under the blazing sun to drop the bundles at the collection point. Mageswari says, “I feel safe doing this work because many of the women who work here are related” 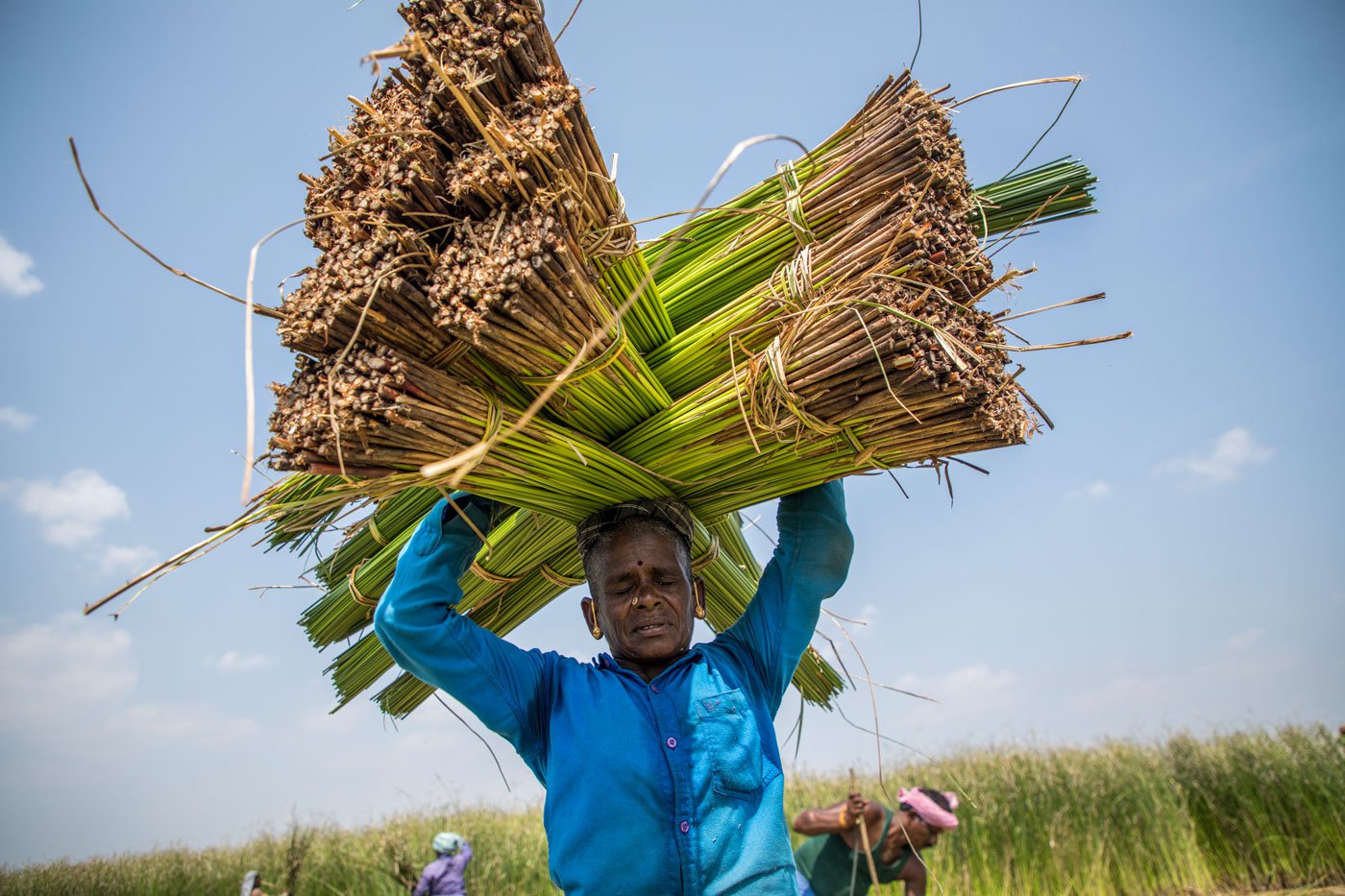 Mariyayi carries a heavy load. “ Waking up, rushing here [to the fields], working the whole day, hurrying back – I get no rest. Even when I ’ m unwell, I can’t lie down at home. I come here and rest in between my work” 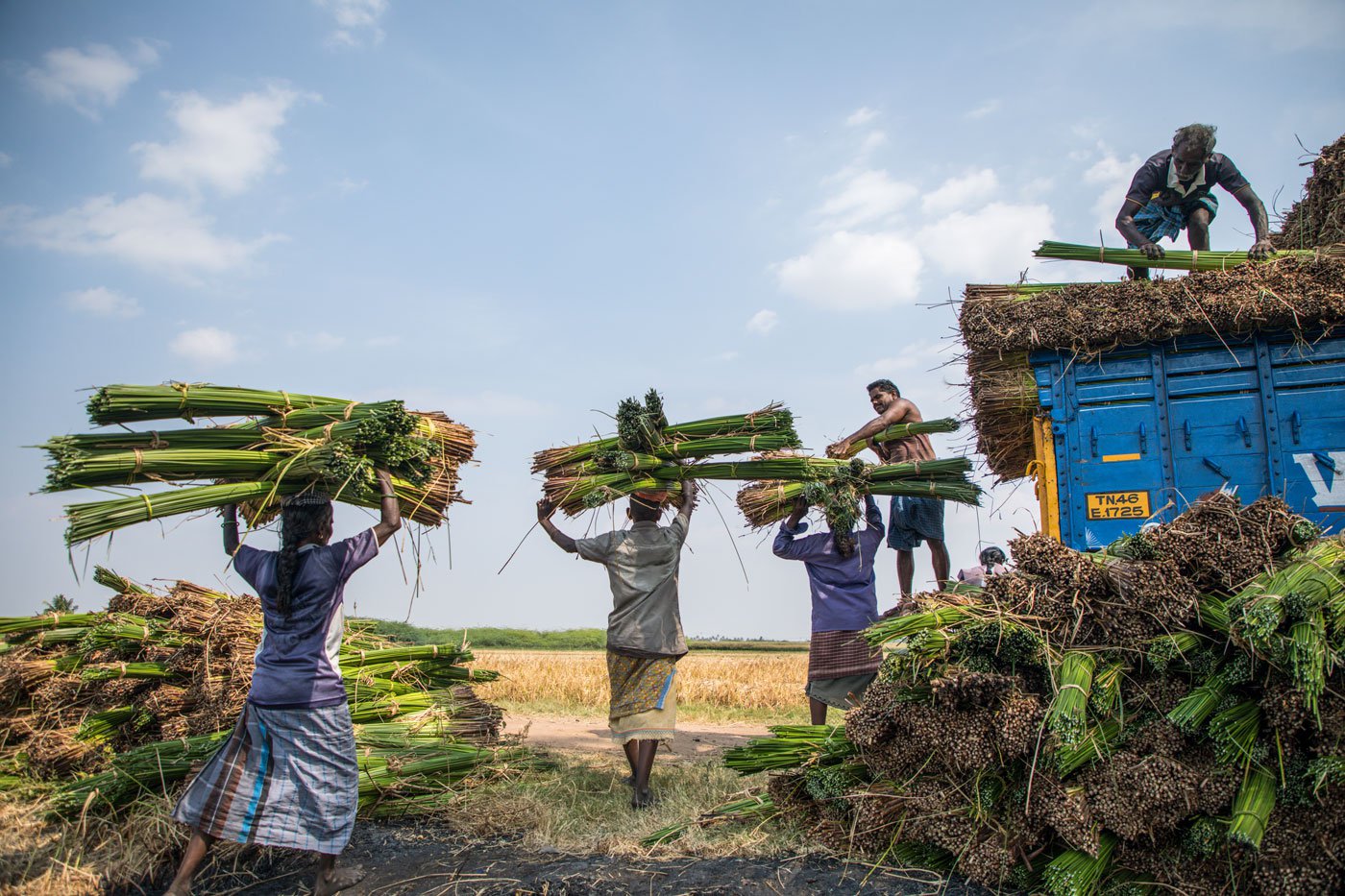 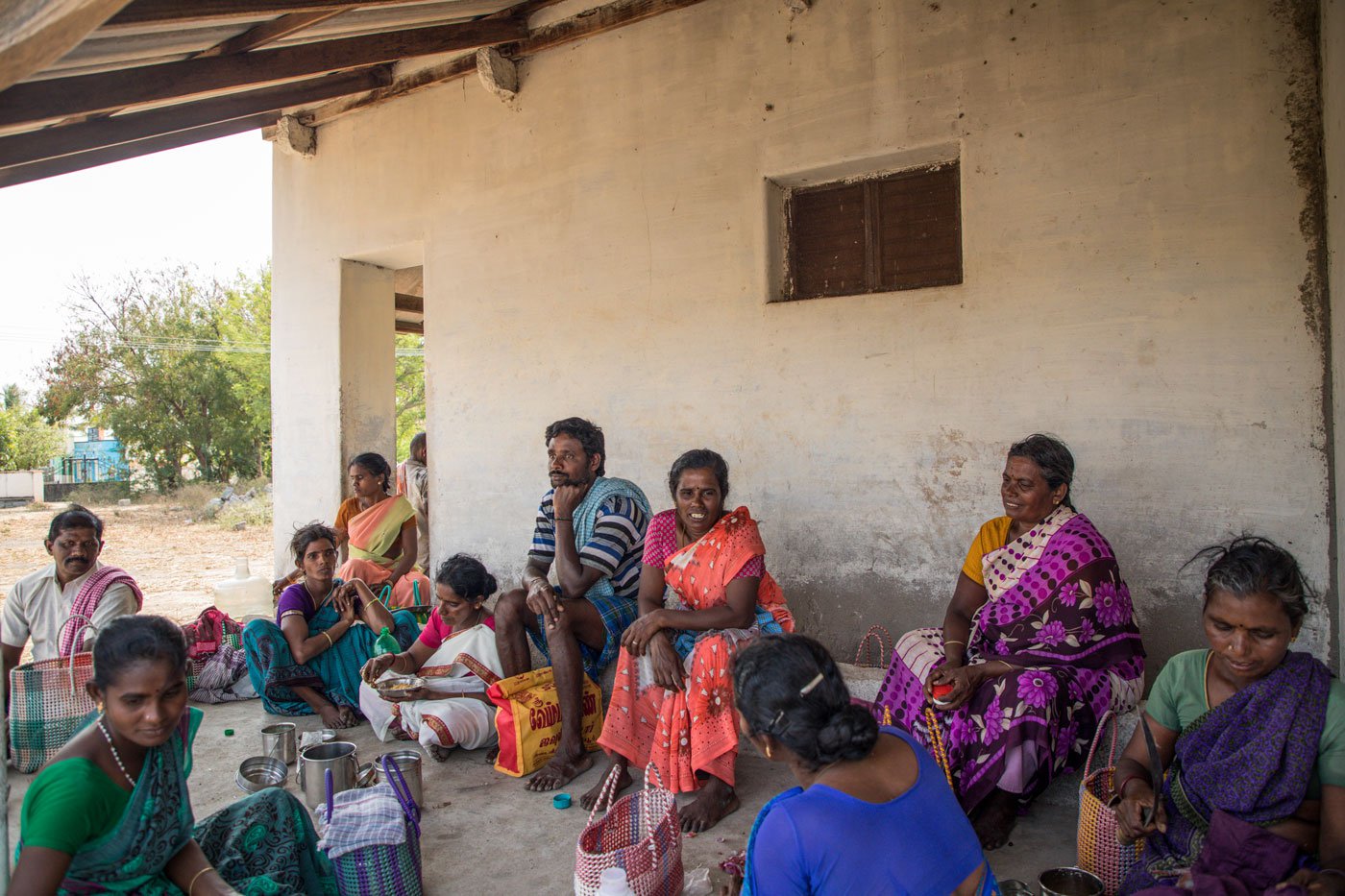 The workers finally eat lunch at about 2 p.m., after completing their day's work. “When we find work nearby, we get home by one o’clock. Otherwise, it is late evening or even night by the time we return ,” says Vasantha

With text inputs from Aparna Karthikeyan.