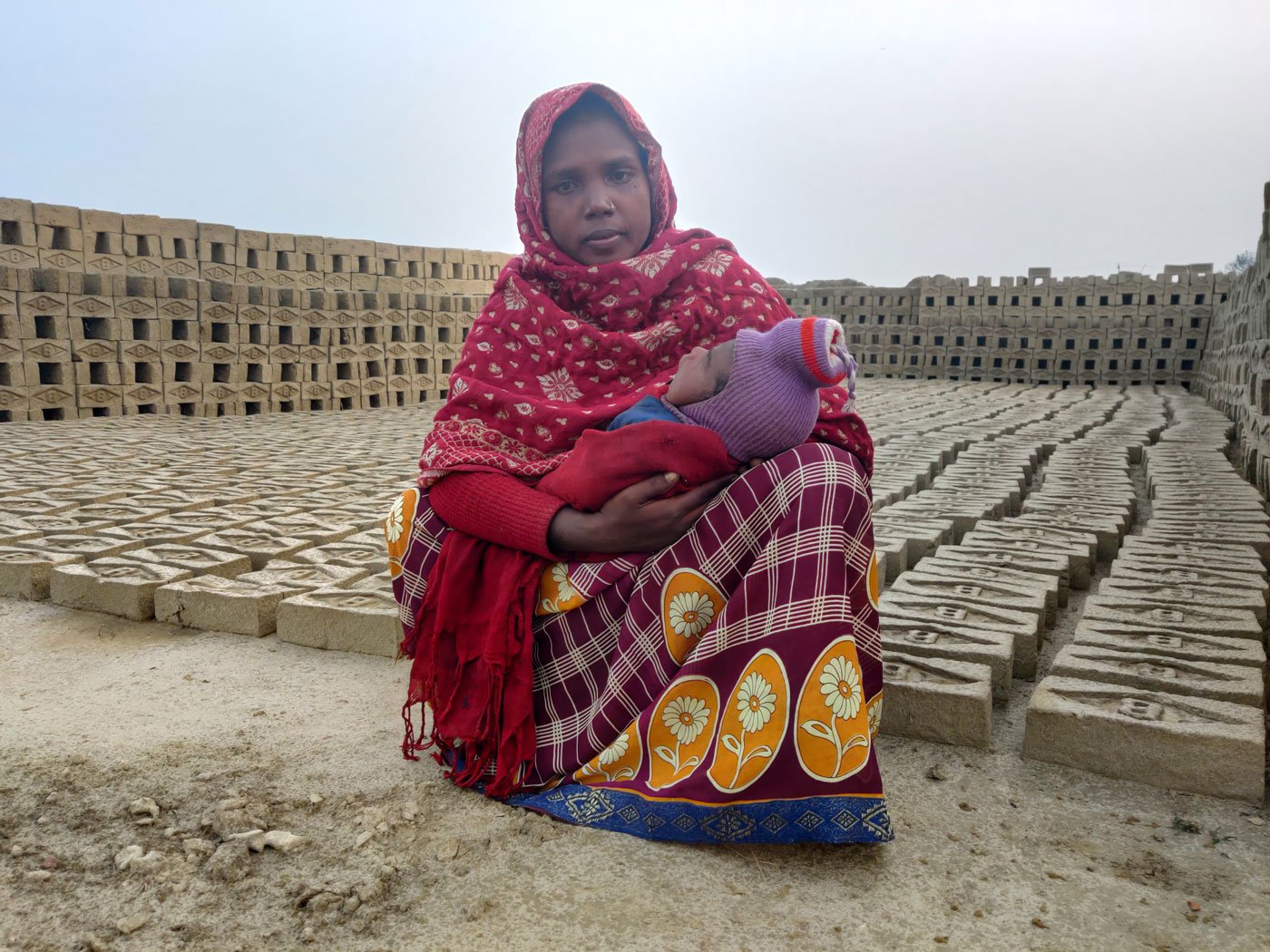 In Uttar Pradesh's Varanasi and Chandauli districts, discrimination of marginalised communities affects their access to healthcare. For Lakshima and Salimun, the pandemic has brought on even more hardship

Lakshima Devi does not remember the date it happened, but she has a vivid memory of that winter night. “The wheat crop was just above the ankle” when her water broke and she went into labour. “It must have been December or January [2018/19],” she says.

Her family had hired a tempo to take her to the primary health centre in Baragaon block. The PHC is about six kilometres from their village, Ashwari, in Uttar Pradesh’s Varanasi district. “I was in a lot of pain when we reached the PHC,” recollects Lakshima, 30. Her three older children, Renu, Raju and Resham, between 5 and 11 years old now, were at home. “The hospital person [staff] refused to admit me. He said I wasn’t pregnant, and the bump on my stomach was due to an illness.”

Lakshima’s mother-in-law, Hiramani, implored the staff to admit her, but the PHC staff refused. Finally, Hiramani told them she would help Lakshima have the baby right there. “My husband was looking for an auto to shift me elsewhere,” says Lakshima. “But I was too weak to move by then. I sat right outside the PHC, under a tree.”

Hiramani, in her 60s, sat beside Lakshima, holding her hand and guiding her to take deep breaths. About an hour later, closer to midnight, she gave birth. It was pitch dark and freezing cold, Lakshima remembers. 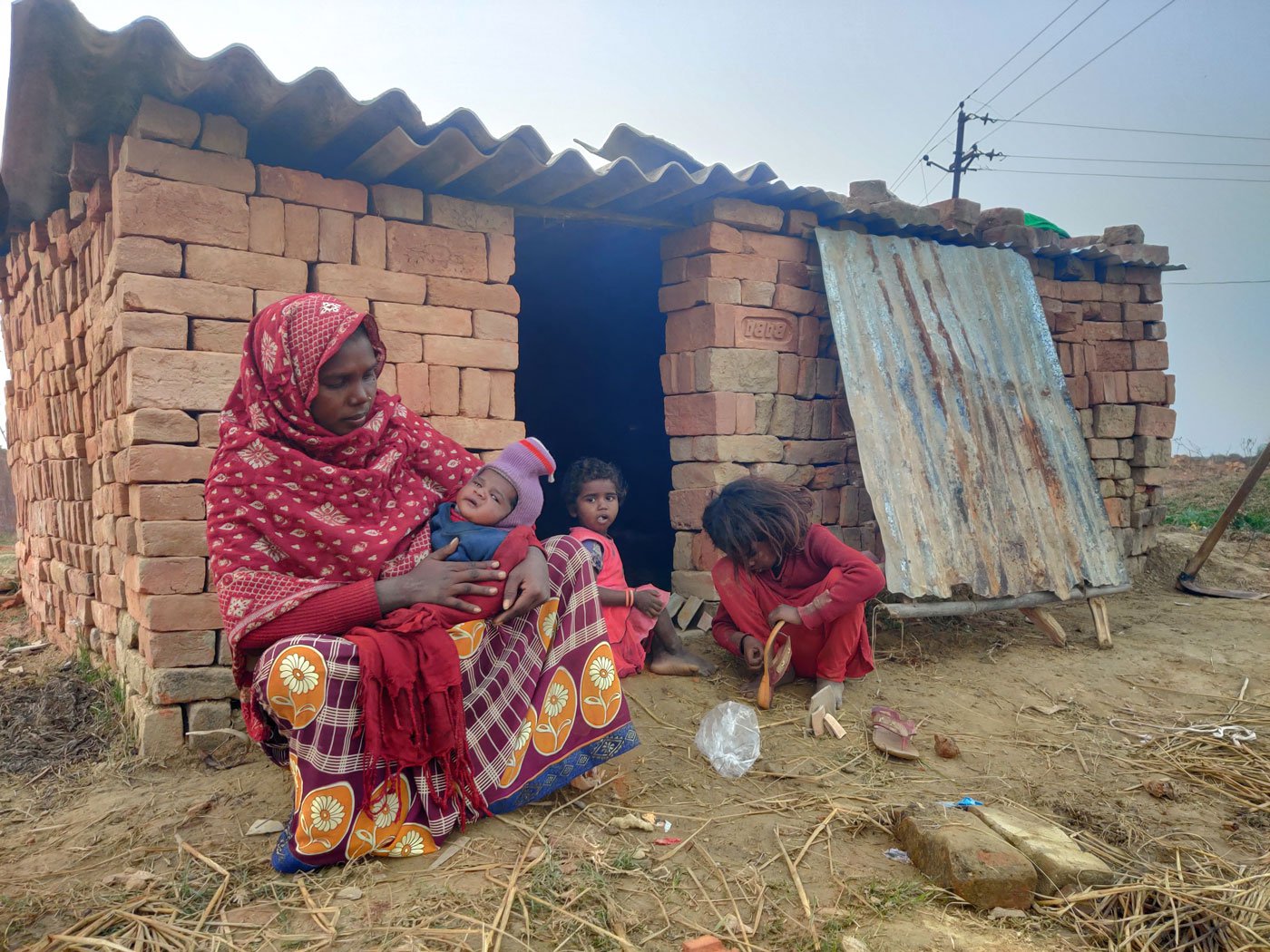 Lakshima with her infant son Amar, and daughters Resham (in red) and Renu. She remembers the pain of losing a child three years ago, when the staff of a primary health centre refused to admit her

The baby did not survive. Lakshima was too exhausted to realise what had happened. “The PHC staff took me in after that, and discharged me the next day,” she says, recalling how weak and tired she was that night. “If they had paid attention when I needed it, my baby would have lived.”

Lakshima belongs to the Musahar community. One of the most marginalised and poorest of Dalit groups in Uttar Pradesh, the Musahars face severe social discrimination. “When people like us go to the hospitals, we are never treated well,” she says.

The treatment she received that night, or the lack of it, was not new to her, nor was she alone in it.

In a Musahar basti in Dallipur, a couple of kilometers away from Ashwari, 36-year-old Nirmala explains how the discrimination works. “When we get to the hospital, they are reluctant to accept us,” she says. “The staff will needlessly ask for money. They will do everything they can to discourage us from entering [the facility]. If we get in, we are asked to sit on the floor. For others, they will bring chairs and talk to them with respect.”

Musahar women are therefore reluctant to go to a hospital, says Mangla Rajbhar, a 42-year-old activist associated with the Varanasi-based People’s Vigilance Committee on Human Rights. “We have to convince them to go to the hospital. Most of them prefer to give birth to their babies at home,” he says. 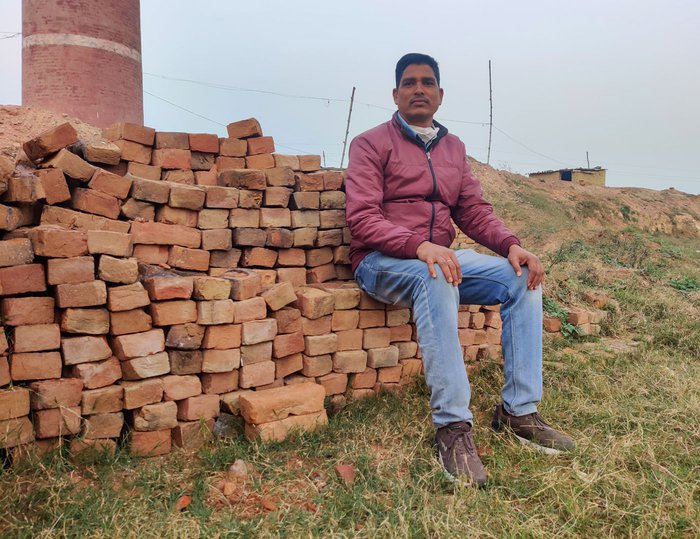 Mangla Rajbhar, an activist in Baragaon block, has been trying to convince Musahar women to seek medical help in hospitals

According to the NFHS-5, about 81 per cent of Scheduled Caste women in UP choose to give birth at a health facility – 2.4 per cent less than the state’s figure. It is perhaps a factor in the neonatal mortality rate, which is higher among the Scheduled Castes

According to the National Family Health Survey-5 , about 81 per cent of Scheduled Caste women in UP choose to give birth at a health facility – 2.4 per cent less than the state’s figure. It is perhaps a factor in the neonatal mortality rate – number of deaths during the first 28 completed days of life – which is higher among the Scheduled Castes (41.6) when compared to the whole state (35.7).

In a survey that Rajbhar conducted in January 2022, out of 64 recent childbirths in seven Musahar bastis of Baragaon block, 35 were home births.

Lakshima had opted for it, when she gave birth to her son Kiran in 2020. “I hadn’t forgotten what had happened earlier. There was no question of going back there [PHC],” she says. “So I paid an ASHA worker Rs. 500. She came home and helped deliver my baby. She was also a Dalit.”

The biases have far-reaching consequences; especially in ensuring health justice in a state where 20.7 per cent the people belong to the Scheduled Castes and 19.3 per cent to the Muslim faith (Census 2011).

It is why when Covid-19 was spreading in UP, many did not get tested for the coronavirus. “Many of us in the village fell sick last year but we stayed home,” says Nirmala, remembering the second wave of the pandemic, in 2021. “Who wants to be humiliated when you are already scared of the virus?” 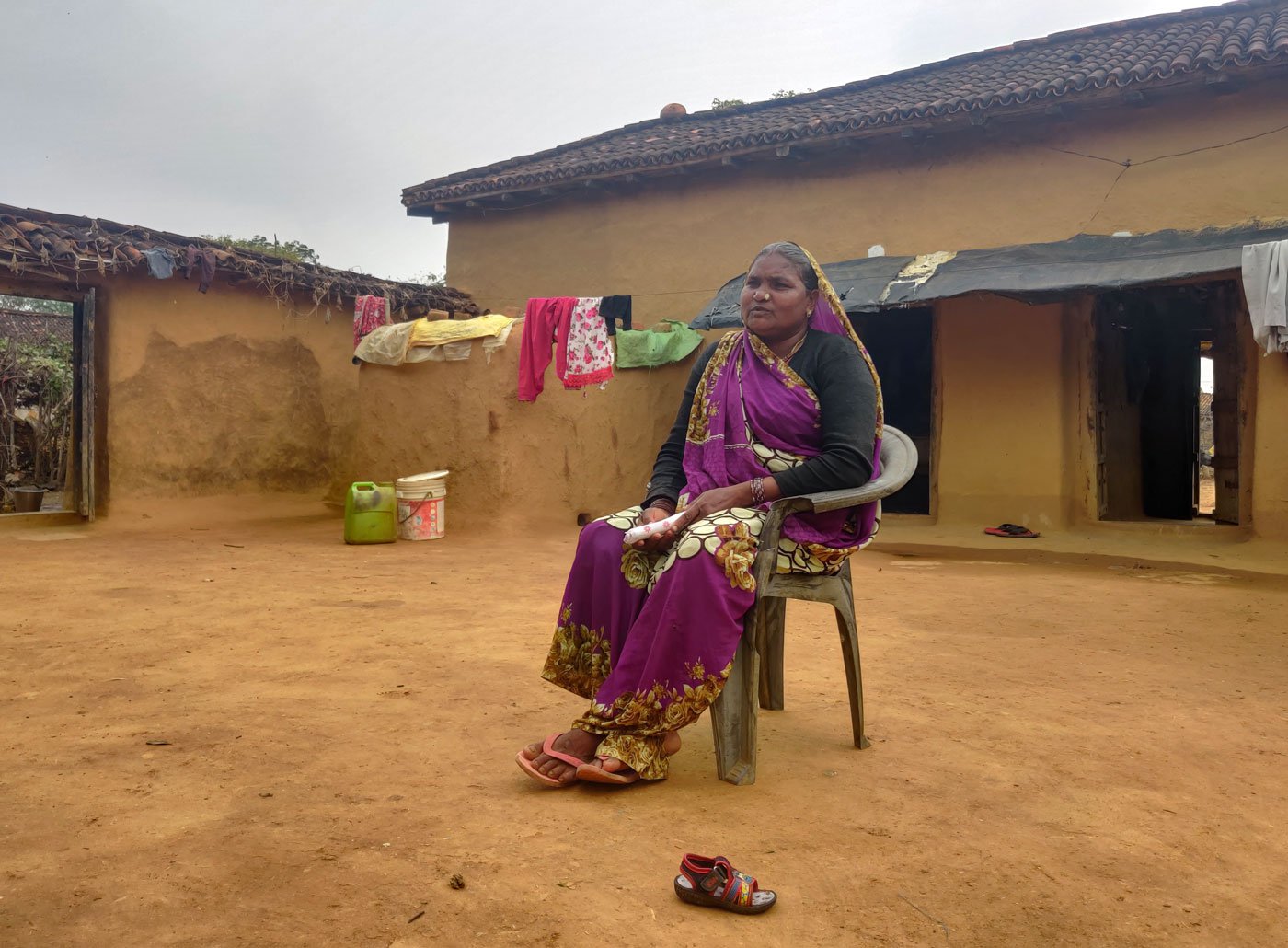 Salimun at home in Amdhha Charanpur village. She says she has faced humiliating experiences while visiting health facilities

But in Chandauli district’s Amdhha Charanpur village, Salimun, 55, could not opt to stay home when she fell ill in March 2021. “It turned out to be typhoid,” she says. “But when I went to the [pathology] lab, the man tried to stay as far away as possible while inserting the needle to draw blood. He was stretching his hands. I told him I have seen many like you before.”

Salimun was familiar with the lab assistant's behaviour. “It happened because of the Tablighi Jamaat incident, because I am a Muslim,” she says, referring to the events of March 2020. At the time, members of the religious group, who had gathered at the Nizamuddin Markaz in Delhi for a congregation. Hundreds of them tested positive for Covid-19 later and the building was declared a hotspot. This was followed by a dark campaign blaming Muslims for the spread of the virus. It led to several humiliating experiences for Muslims in UP and across the country.

To prevent such prejudicial treatment, Neetu Singh, a 43-year-old activist, says she makes it a point to walk through the healthcare centres she visits. “So that the staff knows I am around, and they will treat patients well regardless of their class, caste or religion,” she explains. “Otherwise, the discrimination is rampant,” says Singh, who is associated with an NGO, Sahyog. She works on women’s health issues in Naugarh block, where Amdhha Charanpur is located.

Salimun cites more experiences. Her daughter-in-law, Shamsunisa, 22, experienced complications during childbirth in February 2021. “The bleeding would not stop. She became weak,” says Salimun. “So the staff nurse at the PHC asked us to take her to the Community Health Centre in Naugarh town.”

At the Naugarh CHC, an Auxiliary Nurse Midwife examining Shamsunisa damaged one of her stitches. “I shouted in pain,” says Shamsunisa. “She raised her hand to slap me, but my mother-in-law held it and stopped her.”

The CHC staff refused to treat her and told the family to find another hospital. “We went to a private hospital in Naugarh where we were told to go to Varanasi,” says Salimun. “I was worried for her. She continued to bleed and we could not get her treated for a whole day after the childbirth.”

Neetu Singh, an activist in Naugarh block, says that discrimination is rampant in hospitals

The family has stopped cooking both dal and vegetables on the same day. “It is the same with rice and roti ,” says Salimun. “It is either one or the other. This is the situation with everyone here. Most people have had to borrow money just to survive”

Finally, another private hospital in Naugarh admitted her the next day. “Some of the staff members there were Muslims. They reassured us, and the doctors treated her for the next few days,” says Salimun.

When Shamsunisa was discharged a week later, her medical expenses tallied up to Rs. 35,000. “We sold some of our goats for Rs. 16,000,” says Salimun. “If we hadn’t sold it in a hurry, we would have got at least Rs. 30,000 for them. My son Farooq had some cash saved, which took care of the remaining expenses.”

Farooq, 25, Shamsunisa’s husband, works as a labourer in Punjab. So do his three younger brothers. They struggle to make ends meet and send home some money. “He [Farooq] could not even spend enough time with [baby] Gufran,” says Shamsunisa. “But what do we do? There is no work here.”

“My sons have to migrate to earn money,” says Salimun. In Naugarh, where tomatoes and chillies are cultivated, landless workers like Farooq and his brothers would earn only Rs. 100 for a full day’s work. “And half a kilo of tomatoes or chillies to go with it, twice a week. That is hardly anything,” says Salimun. In Punjab, Farooq earns Rs. 400 for a day’s labour, but he gets work only 3-4 times in a week. “We barely managed to survive after the outbreak of Covid-19. There wasn’t even enough to eat.”

The family has stopped cooking both dal and vegetables on the same day. “It is the same with rice and roti ,” says Salimun. “It is either one or the other. This is the situation with everyone here. Most people have had to borrow money just to survive.” 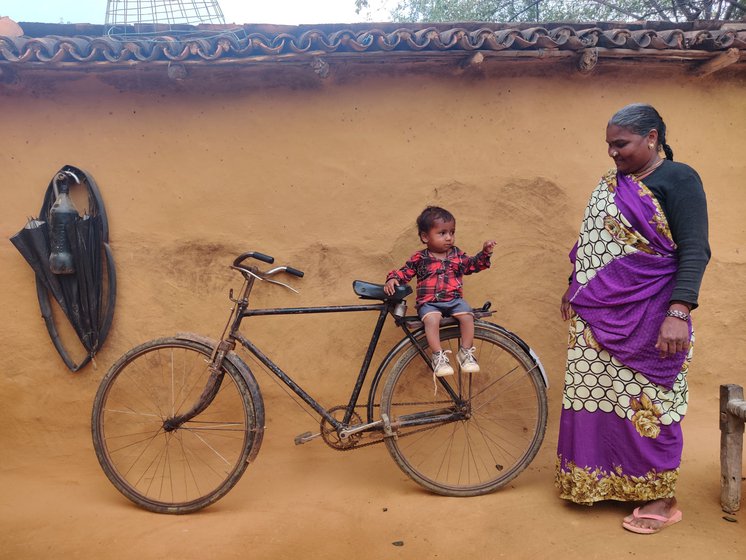 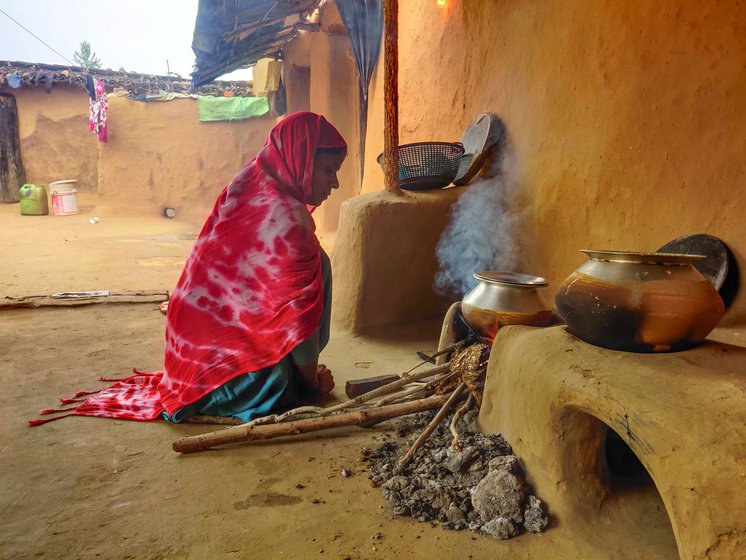 Left: Salimun with Gufran, her grandson. Right: Shamsunisa cooking in the house. She says her husband, Farooq, could not spend much time with the baby

In many of UP’s villages across nine districts, people’s debt grew by 83 per cent in the first three months of the pandemic (April to June 2020). The data was gathered through a survey by COLLECT, a collective of grassroots organisations. It recorded that in July-September and October-December 2020, the increase in indebtedness was 87 and 80 per cent respectively.

The dismal situation forced Lakshima to start toiling at a brick kiln merely 15 days after giving birth to her youngest child in the last week of December 2021. “I am hoping that the employer will see our situation and pay us some extra money for food,” she says, cradling the newborn. She and her husband, Sanjay, 32, each earn Rs. 350 per day at the brick kiln, which is located in Devchandpur, about six kilometres from their village.

During her pregnancy this time, Mangla Rajbhar counselled Lakshima against giving birth at home. “It wasn’t easy to get her to agree. I don’t blame her for that,” says Rajbhar. “But she agreed eventually.”

Lakshima and Hiramani were prepared this time around. At the first sign of the staff’s reluctance to admit Lakshima, they threatened to call Rajbhar. The staff yielded. Lakshima gave birth to her baby inside the same PHC, just a short distance from which she had lost her child over three years ago. In the end, it was those few metres that made all the difference.