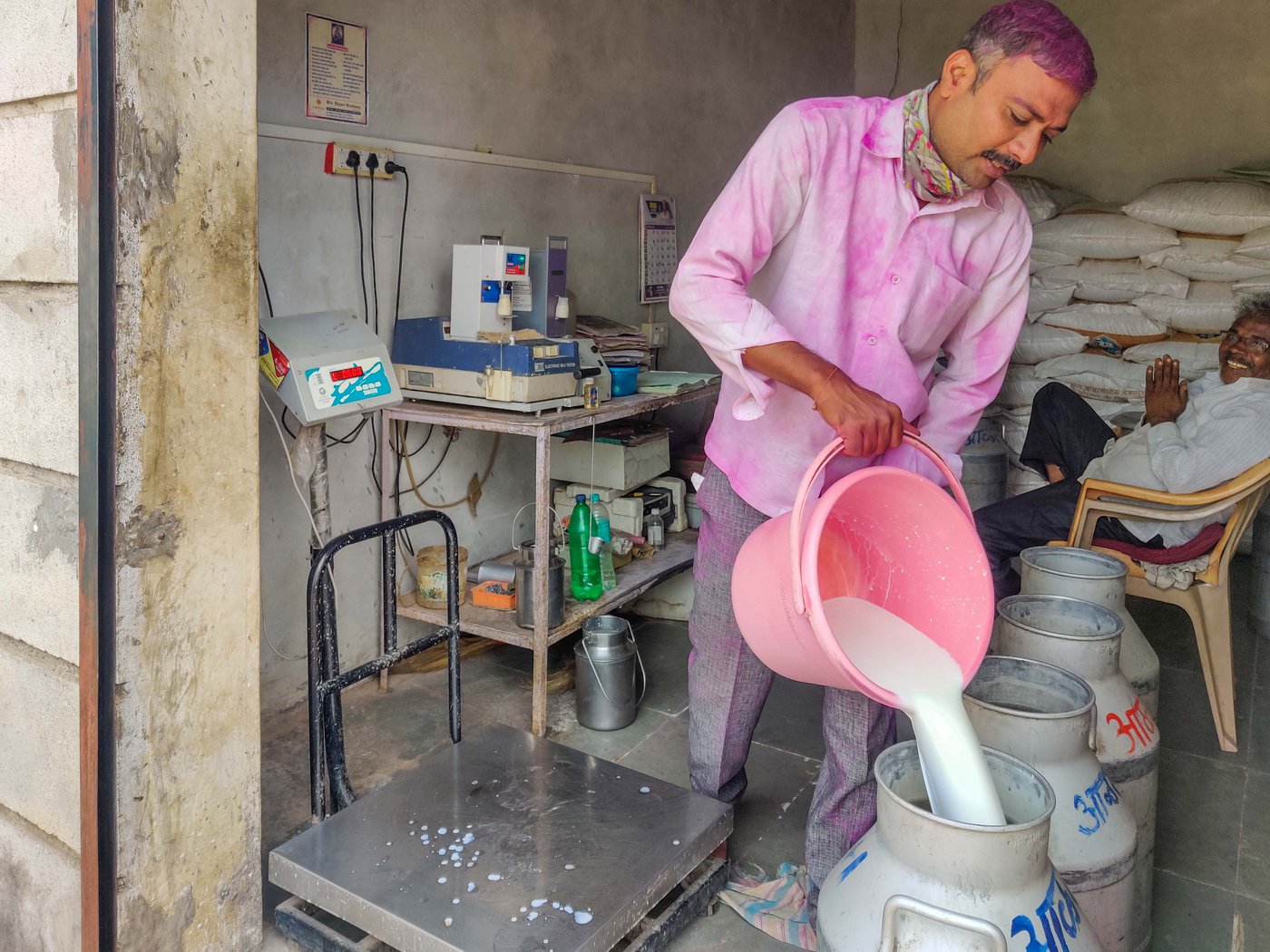 Unable to recover production costs due to the private sector's control over milk prices, dairy farmers like Arun Jadhav in western Maharashtra are selling their livestock and scaling down

Arun Jadhav’s cowshed is rather big for just one cow and a buffalo. The livestock look forlorn, tied to a pole in their stable. “I have another shed behind this one,” says Arun. “The number of sheds I have is equal to the number of animals I have. Soon I may have more sheds than animals.”

A sugarcane farmer in Maharashtra’s Sangli district, 39-year-old Arun once reared seven cows and four buffaloes in his village, Alsund. “I sold them one by one over the past 15 years,” he says. “I have 10 acres of sugarcane fields. Milk production used to be a convenient side business, but it has become a noose around my neck now.”

Sangli is in western Maharashtra, a nerve centre of the dairy industry, with over 42 per cent share in the state’s total milk production. Almost every farmer here rears cows and buffaloes. Milk is an additional source of income for farmers like Arun. For others it is the mainstay. But dairy farmers are scaling down now – the economics does not add up, they say.

For nearly a decade now, western Maharashtra has seen recurring agitations by dairy farmers against fluctuating milk prices. They have spilled, wasted and given away milk to mark their protest. Ajit Navale, general secretary of Akhil Bharatiya Kisan Sabha, who has led many of the demonstrations, says that the price of milk was relatively stable when the bulk was procured by cooperatives and the state. He says: “Ever since private players entered the market, the government’s role has become less and less effective. The prices rise and fall according to their wishes.”

“Private players have profited by controlling the prices. This is what we have been saying about the farm laws as well,” adds Navale, referring to the three farm laws introduced by the union government in September 2020. Protests by farmers in the past year (see PARI’s complete coverage ) led to a repeal of the laws in Parliament on November 29, 2021. 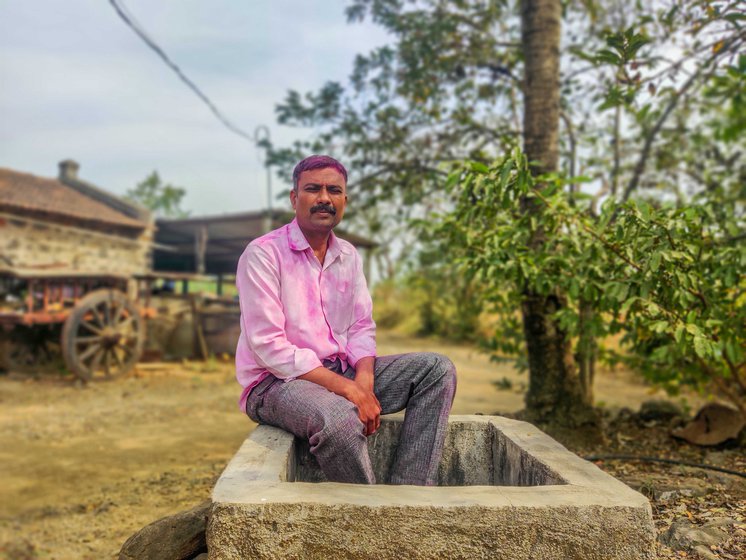 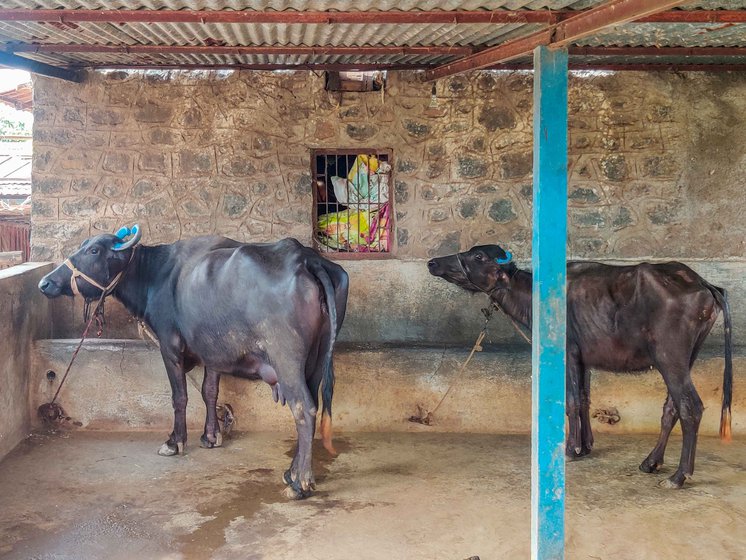 Left: Arun Jadhav outside his cowshed in Alsund . Right: Buffaloes in a shed in the village. Farmers say they are riskier to rear

Navale, who is based in Ahmadnagar city, points out that the dairy sector should have flourished under private investment. “There are over 300 brands operating in Maharashtra’s milk sector. Ideally, this kind of competition should lead to an increase in milk prices for farmers. But that has not happened,” he says. Instead, the dairy farmers have to endure dramatic fluctuations in milk prices, ranging from Rs. 17 per litre to Rs. 32 per litre.

According to a study by the market research agency Crisil in September 2021, private dairies in Maharashtra procure 123-127 lakh litres per day, while cooperative dairies collect 36-38 lakh litres. The dairy industry  was de-licenced after liberalisation in 1991. The Milk and Milk Product Order was introduced in 1992 to regulate the production, processing and distribution of milk and milk products. But in 2002, it was amended to remove restrictions on milk processing capacity, which pushed up price instability.

Prakash Kutwal, general manager of Urja Milk, a private dairy-products company based in Pune district's Shirur town, explains why private investment has not helped dairy farmers in Maharashtra. “Earlier, those involved in the dairy business focused on pouch packing and the rates remained stable for at least six months or so. This worked well for farmers and consumers.” After deregulation, the rates were affected by fluctuations in skimmed milk powder prices in the global dairy market.

Milk powder plants – which supply to manufacturers of milk derivatives – have grown in the Indian market after deregulation. “The rates of companies dealing in milk powder and butter fluctuate every week, which causes the rates of milk to fluctuate every 10 days, making it a gamble,” says Kutwal . “The big brands control milk rates. They also have political backing. But nobody is bothered whether farmers are even recovering their production cost.” 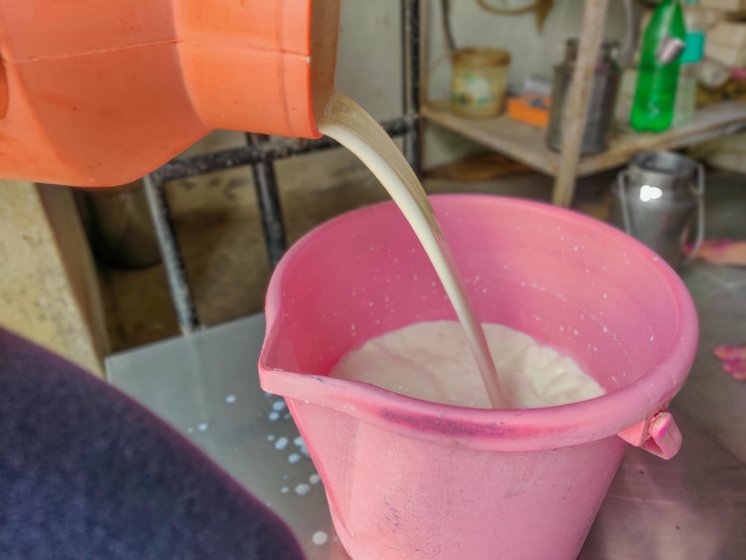 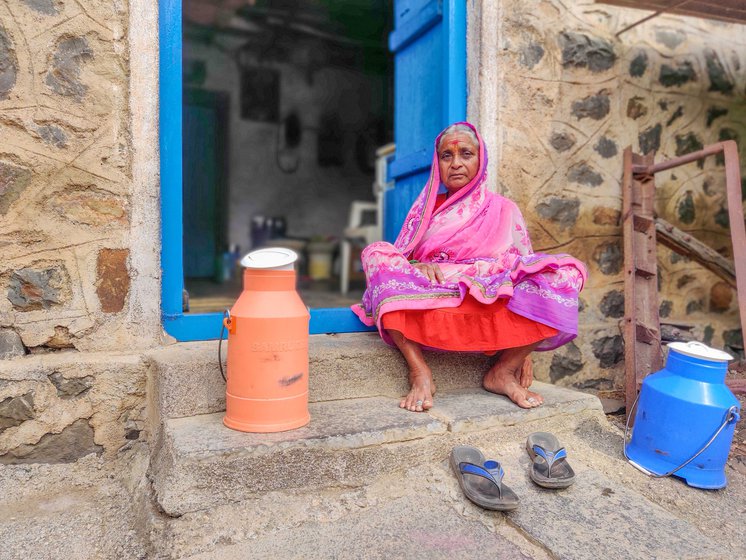 Left: Milk production used to be a convenient side business for sugarcane farmers like Arun Jadhav. Right: Arun's mother, Mangal , outside their hut

Arun can earn Rs. 250 a day, selling an average of 10 litres of cow milk. “Even if I go with the cheapest cattle-feed, I spend 88 rupees a day. That leaves a profit of about 160. And I am not counting the medicinal costs we incur on cows.” he says. “If I worked as an agricultural labourer in somebody’s farmland, I would get 300 rupees a day.”

Rearing buffaloes is riskier, says Bharat Jadhav, a 28-year-old sugarcane farmer in Alsund. The animals often go through an unproductive phase that lasts 4-5 months. “We have to tend to it nonetheless,” he says. “Buffalo milk is sold at 35 rupees per litre. But buffaloes don’t give more than six litres of milk per day.” The price fluctuations were making Bharat anxious, so he does not sell milk anymore. “I had four buffaloes. I sold them all at throwaway prices two years ago.”

Industry heads attribute the disorder in Maharashtra’s dairy sector to a lack of coordination. Responding to their demand for better organisation, in February 2020, Chief Minister Uddhav Thackeray formed a consultative panel – comprising representatives from the private and cooperative dairies – to advise the government. 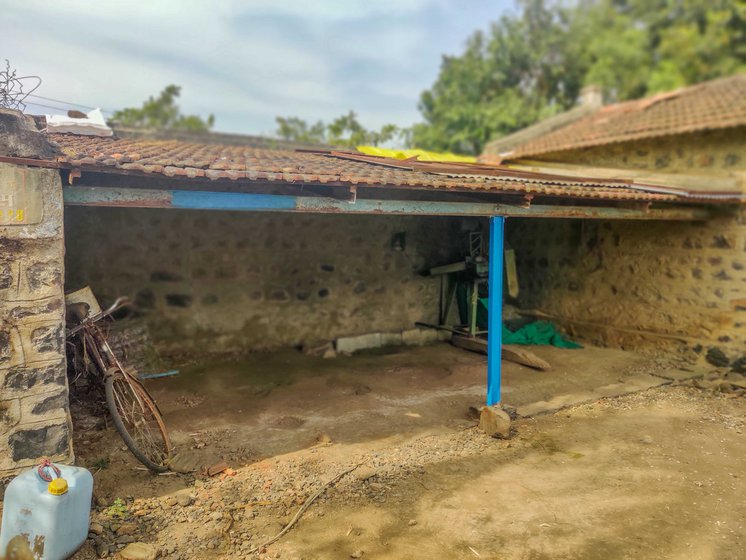 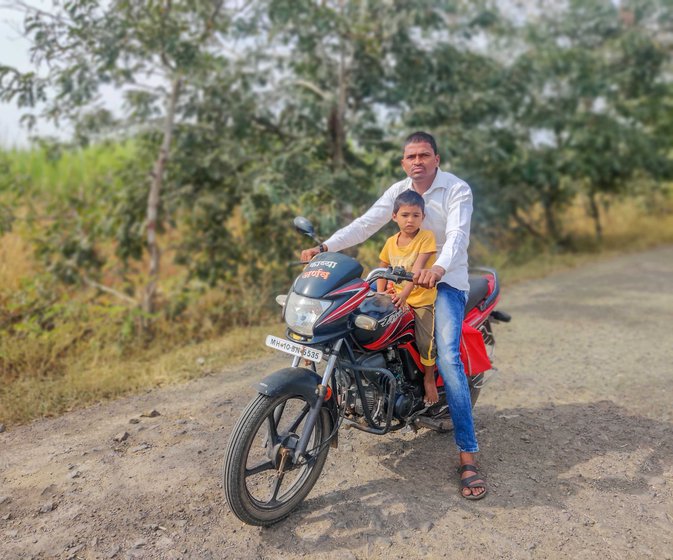 The empty shed (left) at Bharat Jadhav's home. Bharat (right, riding the bike) sold all his buffaloes two years ago

Kutwal is a member of the panel. “Today, there are three sectors operating in the milk trade: cooperative, state and private,” he says. “More than 70 per cent of the milk produced is procured by the private companies. The rest is collected by the cooperatives. The state has a negligible presence. Every time that the rate of milk falls below Rs. 20, the government intervenes temporarily, and announces subsidies to ensure the farmers’ don’t vote against them.” Private powder plants influence milk prices, says Kutwal, who is also the secretary of  Milk Producers’ and Processors’ Welfare Federation, which includes private and cooperative milk traders.

Their experiences with private companies have made western Maharashtra’s dairy producers support the farmers’ agitation – which began in November 2020 – against laws seeking to liberalise the agriculture sector.

Rahul Galande, 29, a milk farmer who also runs a small cafe called Tik Tok in the town of Vita, 15 kilometres from Alsund, in Khanapur tahsil , points at the pen in my hand and asks, “How much did you buy this for?”

“Who decided the cost of this pen?” he asks me.

“The company that manufactured it,” I answer.

“If the company can decide how much it wants to charge for the pen it has manufactured, why can’t we decide the cost of milk that we produce with our hard work? Why is a private company deciding the worth of my product?” asks Galande. “Milk is sold at Rs. 25 here. Sometime back [during the Covid-19 lockdown in 2020], it was down to Rs. 17 per litre. Even a bottle of Bisleri goes for Rs. 20. How are we supposed to stay afloat?” 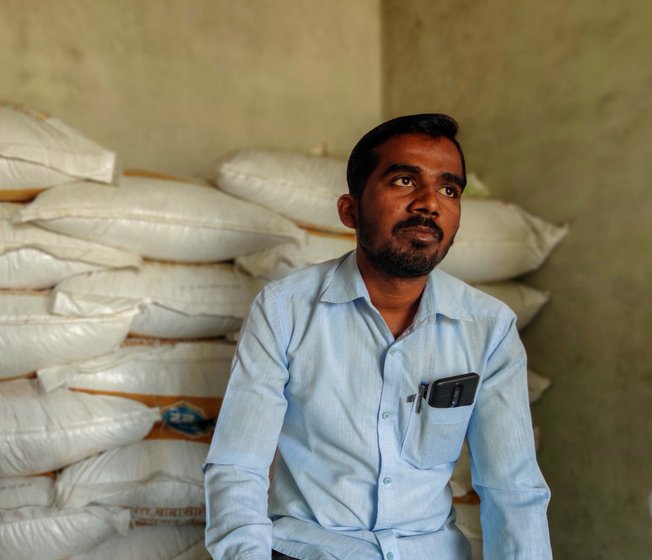 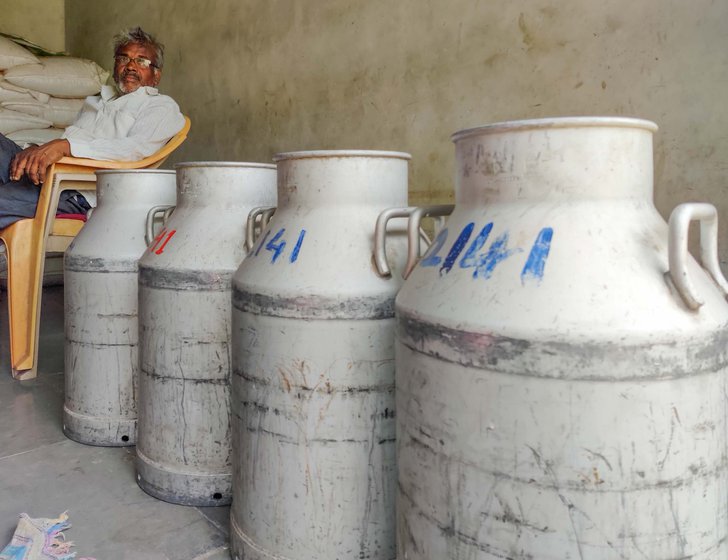 Left: Rahul Galande says farmers should get to decide the prices of the milk they produce . Right: Cans of milk at Arun Jadhav's shop. More than 70 per cent of the milk produced in Sangli is procured by private companies

While the milk farmers are trying to make ends meet, agribusiness seems to be flourishing, says Arun. “The cost of cattle-feed continues to increase. Fertilisers, pesticides also keep getting expensive. But the same rule does not apply to milk.”

Milk farmers are struggling because they do not have an assured price, adds Galande. “Why do farmers cultivate sugarcane?” he asks, and answers the question himself. “Because it has an assured market and has an assured price. We need similar assurance for milk, with government-set support price. That is exactly what the farmers at Delhi stood to lose because of the [farm] laws. Once you let private companies enter without regulation, farmers across the country will face what the dairy farmers in Maharashtra are enduring.”

The government can intervene and stabilise prices of milk for the cooperative sector, says Navale. “But it has no say in what the private players do,” he adds. “And because most of the milk is procured by the private players, the government can do little for the farmers. The brands procuring milk exercise their influence and make sure that the rates don’t go up. They control the market and make astronomical profits.”

Just before the Covid-19 lockdown in March 2020, Navale points out, farmers were selling cow milk at Rs. 29 per litre. “You bought it for 60 rupees in Mumbai,” he tells me. “After the lockdown, the prices plummeted and farmers sold their cow milk for 17 rupees. You, in Mumbai, continued to procure it for 60 rupees. Who exactly is benefiting from this system? Definitely not the farmer.”