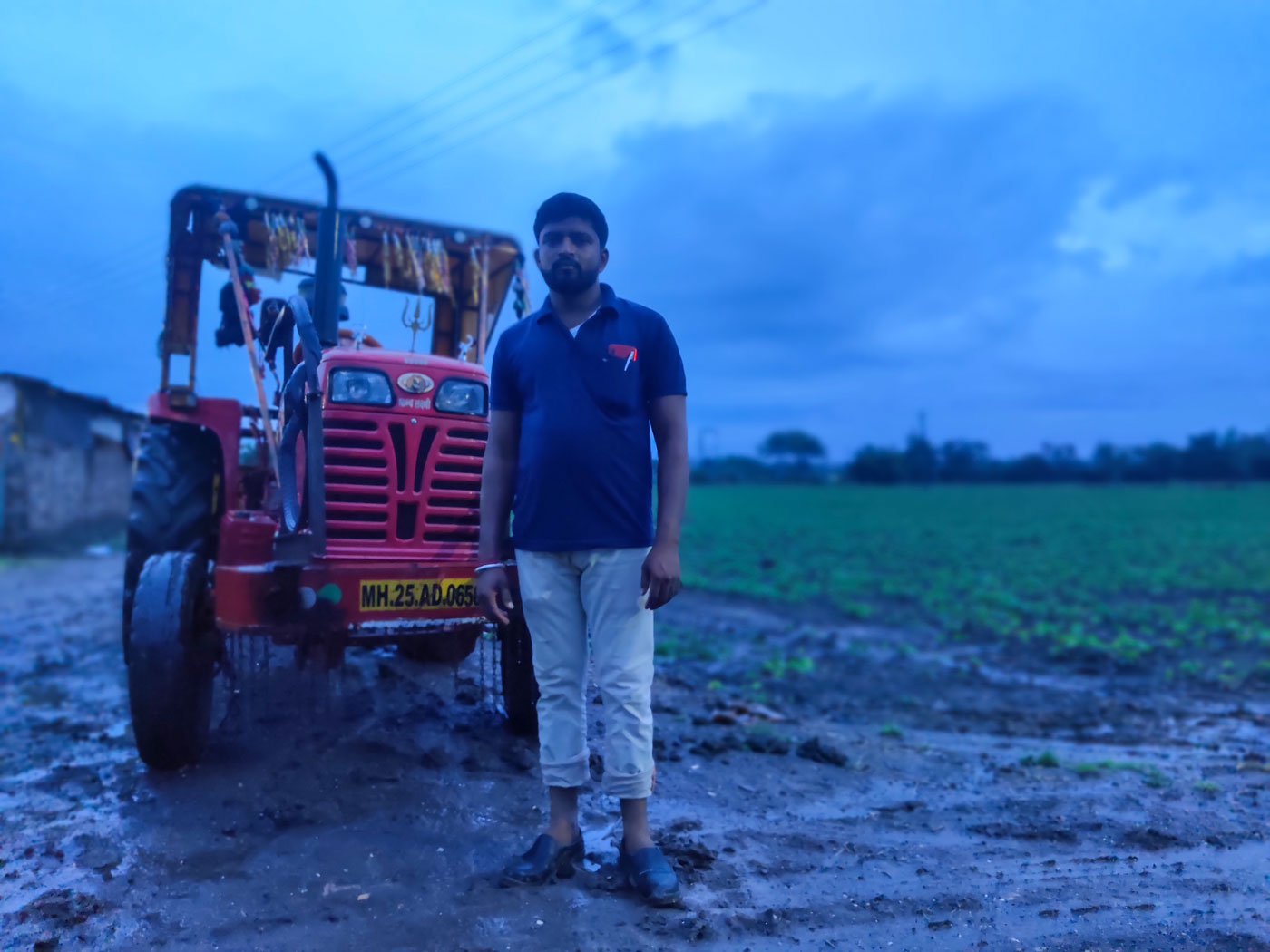 In an already sinking economy, Covid-19, unseasonal rains and crop losses have pushed Marathwada's farmers further into debt. Driven by anxiety and despair, many have taken their own lives

After the outbreak of Covid-19 in March 2020, Arun Gaikwad’s 10-acre farmland in Maharashtra’s Osmanabad district wore a desolate look. “We had harvested jowar , chana [chickpea] and onion around that time,” says his wife Rajashree, 48, at her home in Mahalingi village in Osmanabad taluka .

But the markets were shut because of the nationwide lockdown. “We couldn’t transport our stock to the mandi . So the whole harvest deteriorated in front of our eyes,” says Rajashree.

Arun, 52, and Rajashree had harvested 10 quintals of jowar , 100 quintals of onions, and 15 quintals of chana . At the time, the minimum support price of jowar was Rs. 2,550 per quintal. For chana , it was Rs. 4,800, and onions were selling at about Rs. 1,300 per quintal. The couple therefore lost at least Rs. 227,500, excluding their investment on seeds, fertilisers, pesticides and other inputs.

Besides, they had put in hours of labour to cultivate the crops, Rajashree adds. “He had bought a tractor just before Covid struck, and the monthly instalment of Rs. 15,000 became difficult to pay. We started getting notices from the bank.”

But Arun hoped to recover the losses in the kharif season (July-October) of 2020. The first wave of Covid-19 had ebbed by July and the number of cases was diminishing. He thought the worst was over. “We thought we would get back to normal soon and that the devastation was over. The economy was slowly opening up,” says Pradeep Dhawle, Arun’s 30-year-old son-in-law.

In late June last year, Arun and Rajashree sowed soybean on their land. But at the time of harvest in October, unseasonal rains washed away soybean crops across Osmanabad. “Our entire farmland was flooded,” says Rajashree. “We couldn’t save any of our harvest. He didn’t tell me the extent of loss we suffered then, probably because he didn’t want to add to my anxiety.” She remembers him telling her that their debt was close to Rs. 10 lakh – accumulated over the last 4-5 years. 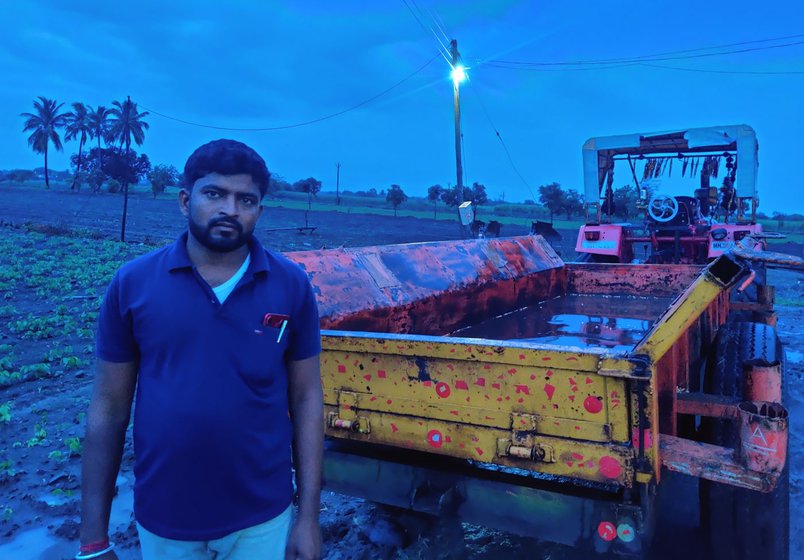 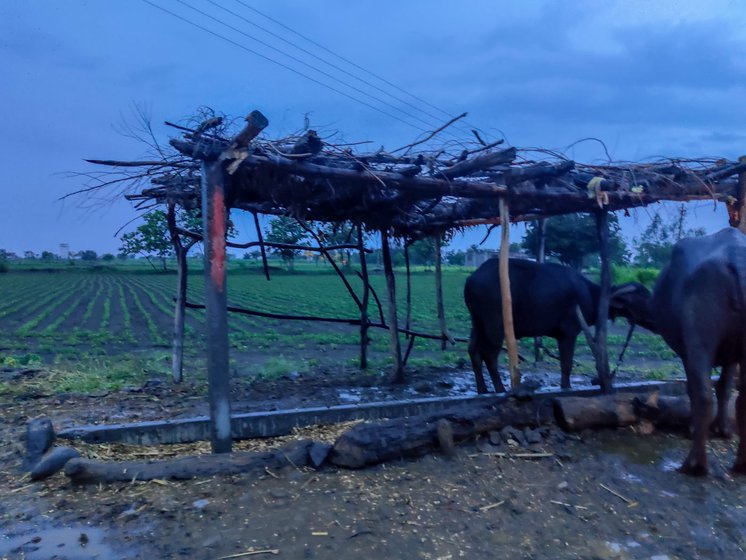 Left: Pradeep Dhawle with the tractor that was purchased by Arun Gaikwad, his father-in-law. Right: The shed where Arun took his own life

Some of it was due to loans taken for the weddings of their three daughters. “Our situation was tough even before Covid. After the lockdown and the heavy rains, it worsened a lot,” says Rajashree. “We also have a 20-year old son, Manthan. We needed money for his education.”

Arun still didn’t lose hope. He thought the worst was finally behind him. With a renewed vigour, he started working towards the rabi season, which begins around November. He planted jowar and chana . “But just when the rabi crops were to be harvested [around March], the second [Covid-19] wave came,” says Pradeep. “It was scarier than the first. People panicked in a way they hadn’t last year. Nobody wanted to be outside.”

This time, they harvested 25 quintals of jowar and about 20 quintals of chana . But it was March 2020 all over again for Arun and Rajashree. The country went into another lockdown, the markets shut, and prices of all major crops fell.

The thought of enduring another disaster must have overwhelmed Arun. One morning in April this year, he hanged himself to death in a shed next to his house.

Arun may have escaped Covid-19, but he couldn’t escape the damage it left in the wake.

In just a year after Covid-19 broke out in March 2020, an estimated 75 million people in India were pushed into poverty – with incomes of $2 or less a day – according to a March 2021 report by the US-based PEW Research Center.

The recession is particularly noticeable in Osmanabad – an agrarian district in Maharashtra’s Marathwada region – where farmers have been struggling with debt and distress since the last three decades. 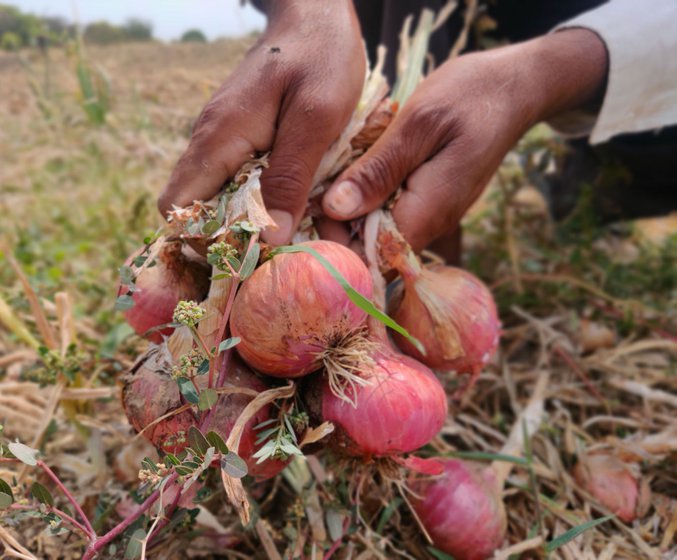 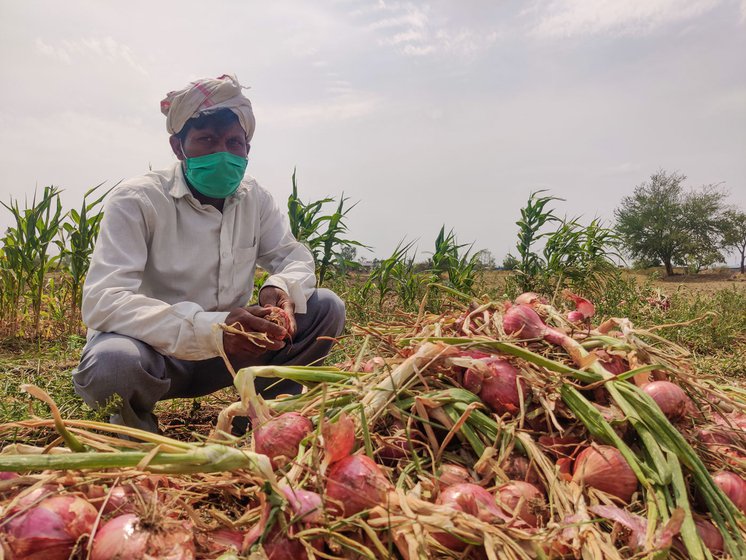 Harvested onions in Osmanabad going to waste in April this year, when the second wave of Covid-19 prevented farmers from selling their stock

Marathwada had accounted for the highest number of farmer suicides in the state from 2015 to 2018. Now, the sinking local economy – weighed down by the years of drought, inflation and climate change – has exacerbated the farmers’ problems. Their struggle for survival has become more difficult since the pandemic started, pushing many farmers to the brink of poverty.

Ramesh Chaure, 40, gave in to the fear of losing everything even before the second wave struck – the first had broken his resolve.

A three-acre farmer in Osmanabad’s Raghuchiwadi village, Ramesh had borrowed money for his wife’s dialysis treatments – for which they would go to Latur, 90 kilometres away, at least once a month. “He had to spend a lot on her treatment,” says his uncle Ramrao, 61, who lives next door. “In September 2019, she passed away.”

After his wife’s death, Ramesh cultivated jowar and soybean on his land. He drove a tempo to stay afloat, and looked after his 16-year-old son, Rohit. “He made Rs. 6,000 a month as a driver,” says Ramrao. “But he lost work due to Covid-19 [outbreak]. And he suffered as a farmer too.”

Ramesh’s growing debt – Rs. 4 lakhs, including farming expenses and medical bills – began to worry him. “He realised that even if the soybean season turned out fine, his debt was not going away anytime soon,” says Ramrao. In September last year, Ramesh ended his life. “I had gone to the field in the evening, and when I returned, I found him hanging from a ceiling fan [in his home],” remembers Ramrao. “The rains in October washed away his whole harvest. He didn’t have to see that, at least.”

Having lost both his parents in the span of a year, Ramesh’s son Rohit started working at a ration shop to support his studies. “I have just finished school and want to go to college and study Arts,” he says. “I will see what to do after that.” 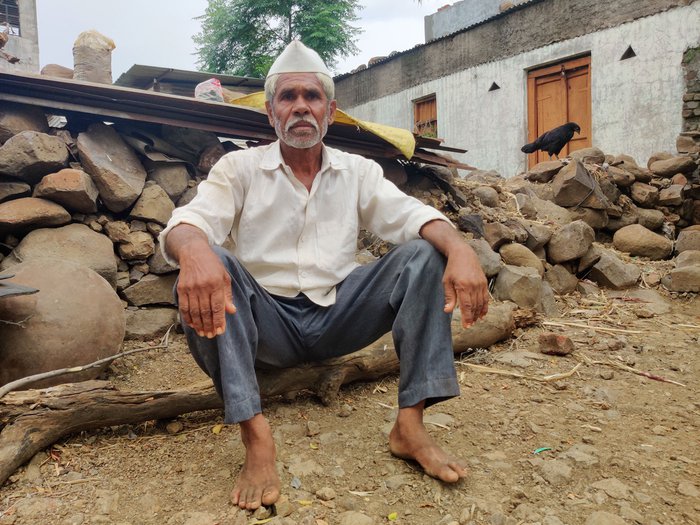 "Ramesh suffered as a farmer," says Ramrao Chaure about his nephew

The sinking local economy – weighed down by the years of drought, inflation and climate change – has exacerbated the farmers’ problems. Their struggle for survival has become more difficult since the pandemic started, pushing many farmers to the brink of poverty

The farmers’ crumbling purchasing power has had far-reaching consequences.

The effects were felt by 31-year-old Shrikrishna Badhe, owner of a krishi seva kendra in Beed district’s Dharur taluka. His shop in Devdahiphal village – about 115 kilometres from Osmanabad city – sold seeds, fertilisers and pesticides to farmers in the area. “In several cases, farmers don’t buy these inputs, they borrow it,” says Badhe’s 24-year-old cousin, Khandu Pote. “Once the [agricultural] season ends, they pay what they owe to the shopkeeper after selling their stock.”

However, most of the farmers were not able to pay back Badhe after the pandemic broke out, says Pote. “Shrikrishna himself had five acres of farmland, so he knew the farmers weren’t lying,” he adds. “But he had to pay his distributors for the stock he had bought from them. He was looking to borrow money to do that. But it didn’t work out.”

Badhe grew more and more anxious. Then, in May 2021, he went to his farm one day and hanged himself to death from a tree. “He feared another season of loss and despair,” says Pote. “The fact is, farmers have no other way to recover their losses other than to keep on farming.”

That is exactly what Rajashree plans to do. “We borrowed Rs. 1 lakh at the start of the soybean season [in 2021],” she says. “We will repay it at the end of the season when we harvest the soybean crop. This is our only option to slowly reduce our debt.”

So, Rajashree needs an excellent harvest. Her daughters and their husbands are helping her out in the meantime. Things were starting to get back on track for her. But after Cyclone Gulab brought heavy rainfall to Marathwada in late September, Rajashree is afraid to assume that the worst is behind her.