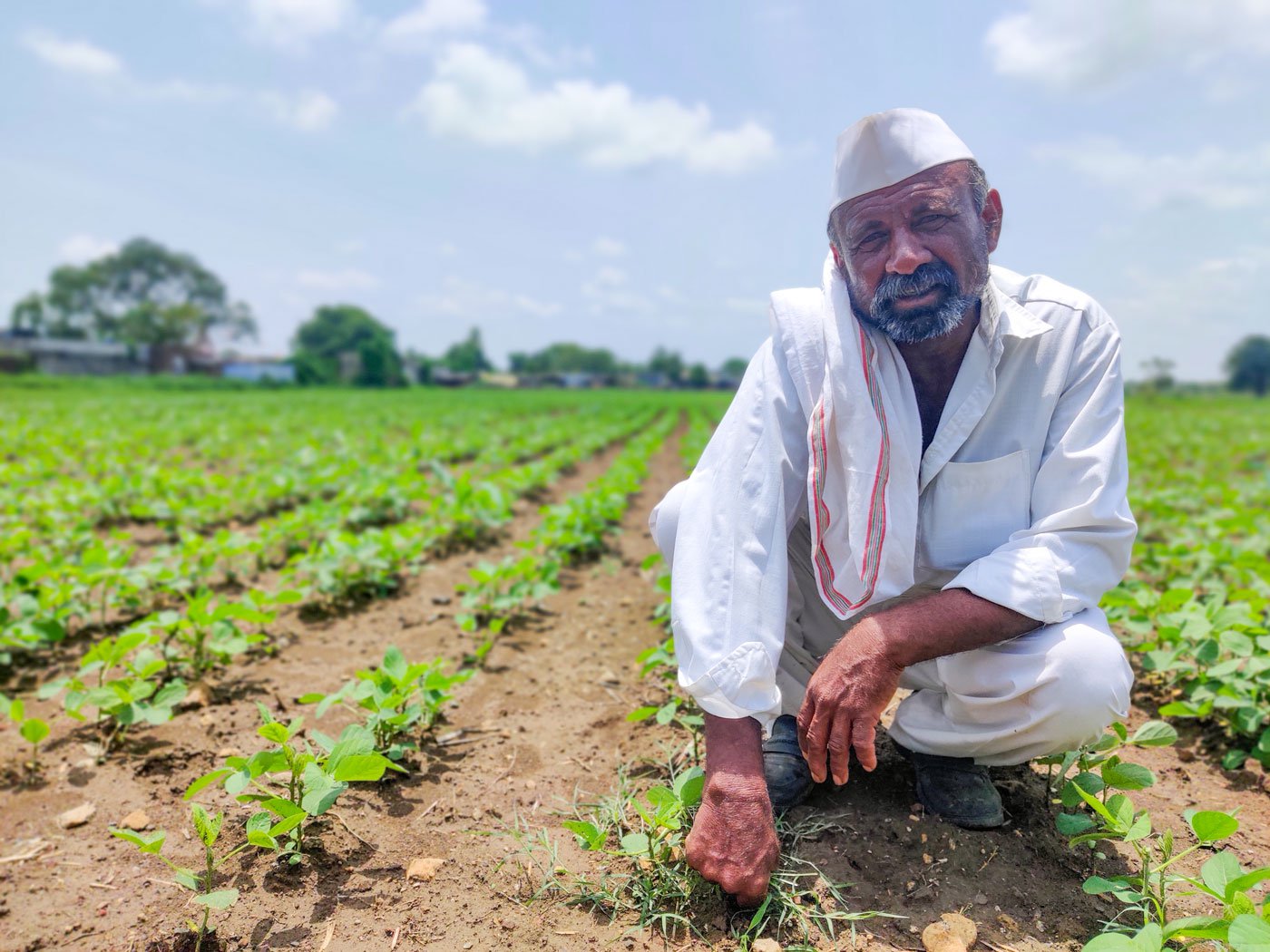 In Osmanabad: crop insurance, no assurance

Unseasonal rains, changing weather patterns and the Covid-19 pandemic have increased the risks of farmers in Marathwada, but the government-backed crop insurance scheme has hardly given them succour

Two weeks of driving rain was enough to destroy four months of hard work in Osmanabad’s farmlands last year. Angry clouds had crumbled and burst into heavy downpour in October – and windstorms uprooted roofs of homes, knocked down animals and washed away miles of crops.

Some of those crops belonged to Sharda and Pandurang Gund, farmers in Mahalingi village in Osmanabad, Maharashtra. “We lost nearly 50 quintals of soybean that we had harvested,” says Sharda, 45. “The water in our land was up to our knees. It destroyed everything.”

According to Indian Meteorological Department’s data, Osmanabad district received 230.4 millimetres of rainfall in October 2020 – a staggering 180 per cent more than district’s average for the month.

As Pandurang, 50, helplessly watched the rain take away every bit of his crop, soybean was selling at a minimum support price of Rs. 3,880 per quintal in the agricultural market. In other words, he and Sharda lost stock worth Rs. 194,000. “Also, we had invested about Rs. 80,000 on it,” says Sharda. “You have to purchase seeds, fertilisers, pesticides and so on. I am not even counting our back-breaking labour for over four months to cultivate the crop. But the rainfall was sudden, and we couldn’t do anything about it.” 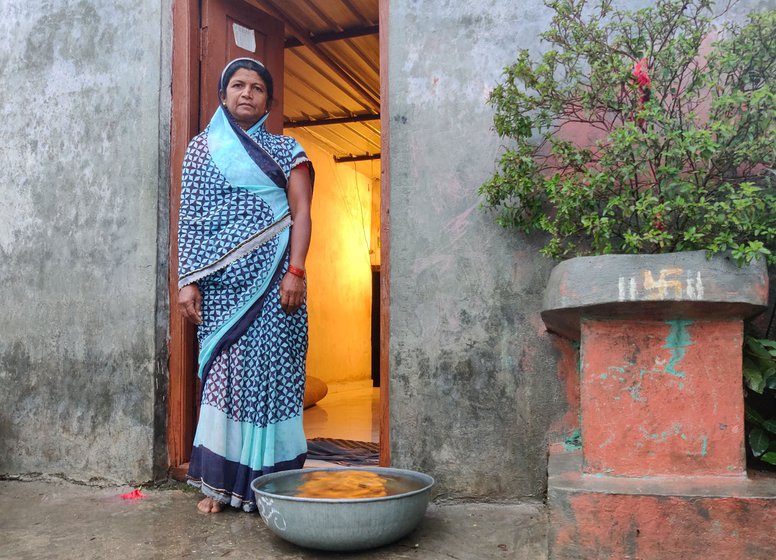 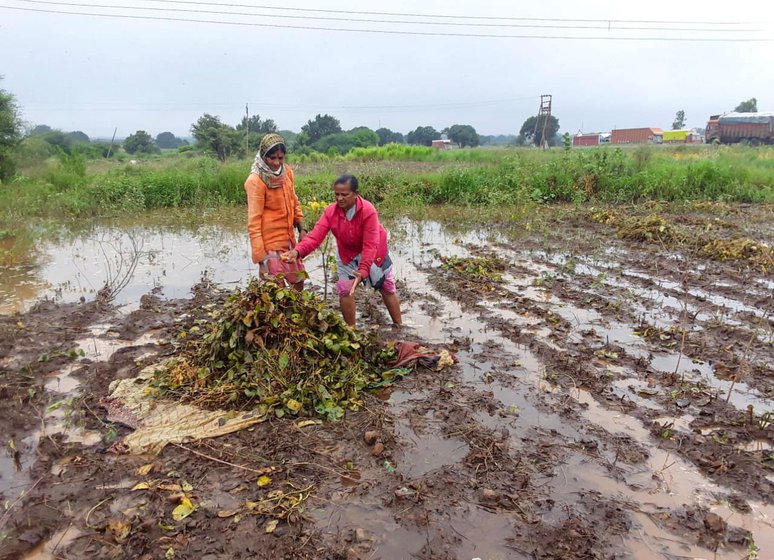 Left: Sharda Gund lost 50 quintals of soybean in the torrential rains of October 2020 in Osmanabad. Right: File photo of some farmers saving what was left of their crop

To protect themselves from such an unexpected calamity the couple had insured their soybean crop under the Pradhan Mantri Fasal Bima Yojana (PMFBY) – the insurance scheme launched in 2016 by Prime Minister Narendra Modi "to ensure comprehensive risk cover for crops of farmers against all non-preventable natural risks from pre-sowing to post-harvest stage."

Pandurang paid a premium of Rs. 1,980, which was 2 per cent of the sum insured, Rs. 99,000, for his crop in their 2.2 hectares (just over 5 acres) of land. The scheme stipulates a maximum of 2 per cent of the sum insured to be the premium payable by farmers for kharif crops – like soybean, bajra , tur , cotton and others that grow in July-October. The balance of charges to the empanelled agricultural insurance company – Bajaj Allianz General Insurance Co. Ltd in this case – is shared by the central and state governments.

However, while the Gund family’s losses ran into more than Rs. 2.5 lakhs, when Pandurang claimed insurance, he received only Rs. 8,000 from the company.

Pandurang and Sharda really needed the insurance money. After the outbreak of Covid-19 in March 2020, farmers across the Marathwada region – where Osmanabad is located – suffered consistent losses. The agricultural economy had become more sluggish, and the destruction of crops in the deluge had added to the family’s financial stress.

According to the records of Osmanabad’s agriculture department, 948,990 farmers in the district had insured their crops during the kharif season of 2020-21. Between them, the farmers had paid a premium of Rs. 41.85 crores. The state’s and Centre’s shares were Rs. 322.95 crores and Rs. 274.21 crores respectively. In total, Bajaj Allianz had received Rs. 639.02 crores from the farmers and the governments combined.

But when excessive rainfall destroyed the crops in October last year, Bajaj Allianz settled the claims of only 79,121 farmers, and disbursed Rs. 86.96 crores among them. In effect, the insurance company retained the balance – Rs. 552.06 crores. 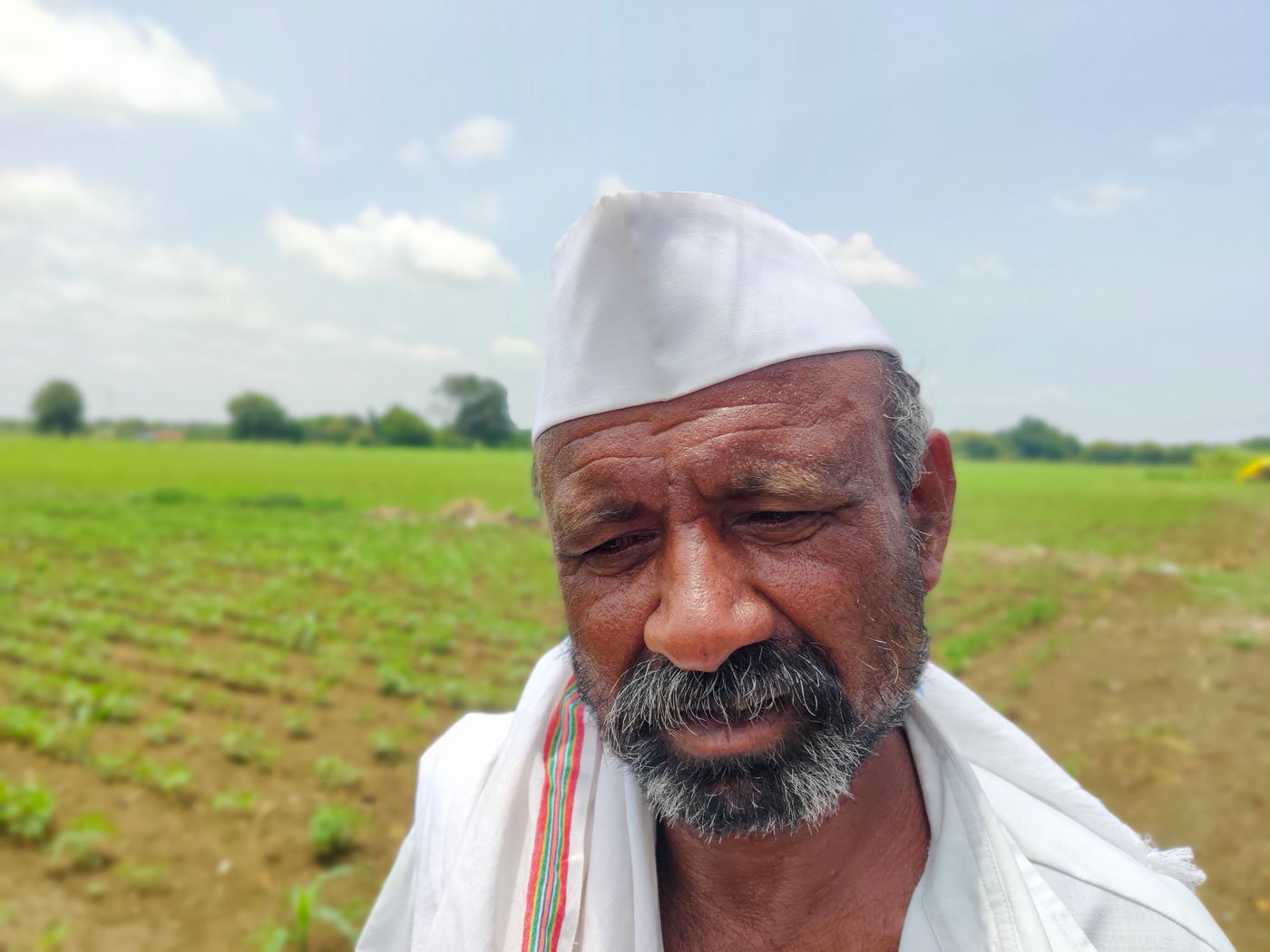 Bibhishan Wadkar in his farm in Wadgaon village. Crops insurance rules must favour the farmers, he says

An email questionnaire sent by PARI on August 20 this year to the PMFBY grievance redressal officials named in the insurance company’s website, yielded no response. The same questionnaire was then sent to a company spokesperson on August 30, who told this reporter that Bajaj Allianz would not comment nor respond to the questions.

Why the insurance claims of other farmers were rejected, remains unanswered. The farmers believe that a technicality – failure to notify the company within 72 hours of the damage – was used by the company to deny them their rightful compensation.

About 25 kilometres from Osmanabad city, in Wadgaon village, 55-year-old Bibhishan Wadkar says in a pleading tone that the rules must be favourable to farmers and not the insurance companies. “We feel like beggars asking for the compensation that we deserve. We have paid the insurance premium and we are entitled to the insurance claim.”

Bibhishan lost about 60-70 quintals of soybean in October 2020. “I had stacked it up in my farm and covered it with a plastic sheet to protect it from rainfall.” But the sheet did not provide adequate cover against the downpour and the winds that descended on his farm. The rain came down so hard that it even washed away soil from his land. “The entire harvest was spoiled, except 2-3 quintals,” he says. “What am I supposed to do with that?” 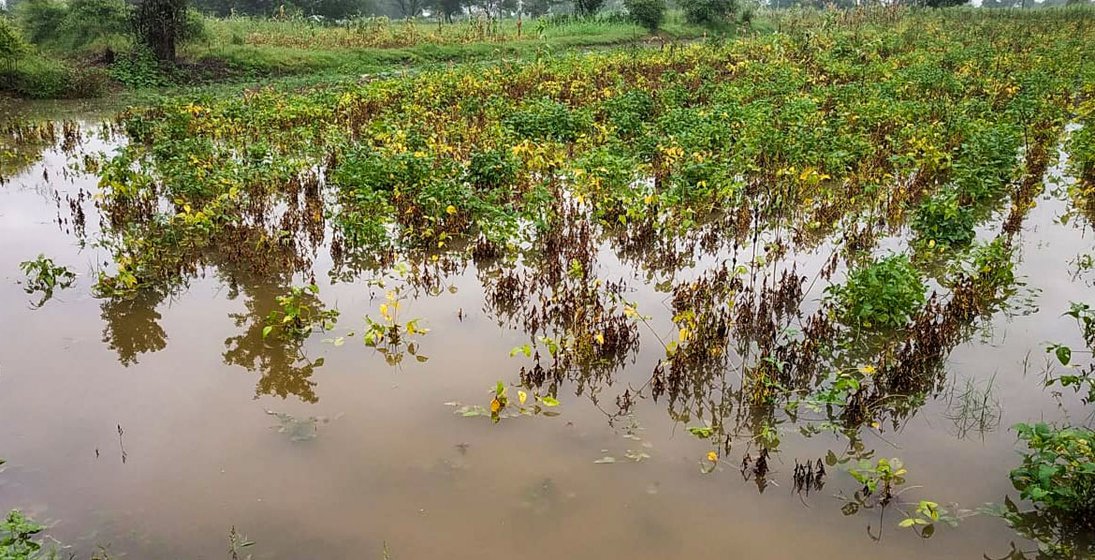 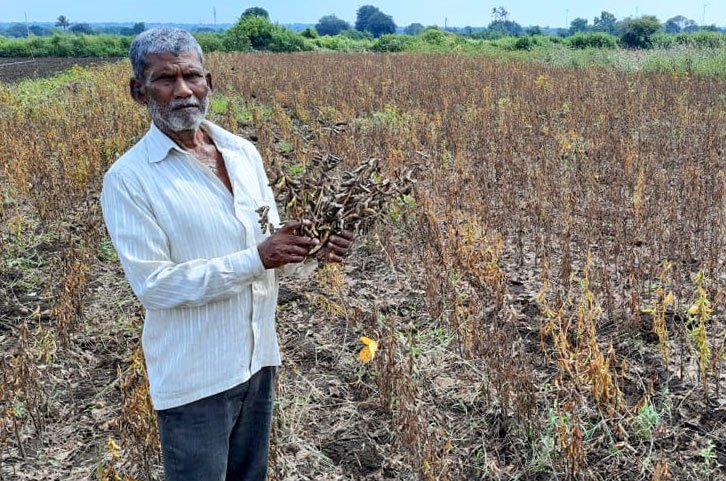 The cloudburst had scattered trees and brought down electricity poles too. “We didn’t have power  for days,” says Bibhishan. “We couldn’t charge our phones. And their [insurance company’s] helpline works from 9 a.m. to 9 p.m. That means you have 36 hours to notify them, not 72. You don’t always think on your feet in such circumstances. The rules are unfair to us.”

At a meeting in December 2020, where Osmanabad’s district magistrate, Kaustubh Divegaonkar, reviewed the implementation of PMFBY with farmers and the insurance company’s officials, he suggested that Bajaj Allianz relax the 72-hour notification rule. But that didn’t happen.

To challenge the insurance company’s discriminatory settlement of farmers’ claims, a group of 15 farmers filed a writ petition in the Bombay High Court, on June 7, 2021. Apart from Bajaj Allianz, the petition named the department of agriculture of the union and state governments, and the district magistrate of Osmanabad, as respondents. The petition was backed by Member of Legislative Assembly Kailas Patil and Member of Parliament Om Raje Nimbalkar. Both the leaders are from Osmanabad and both represent Shiv Sena, the ruling party in Maharashtra’s coalition government.

Explaining why he and Kailas Patil supported the petition, Nimbalkar says: “After the rains destroyed the harvest, the state and Centre compensated the farmers. When even these governments have acknowledged that the farmers suffered, why is the insurance company finding technicalities to not settle the claims? That is why, I, along with Kailas Patil, have backed the petition.” 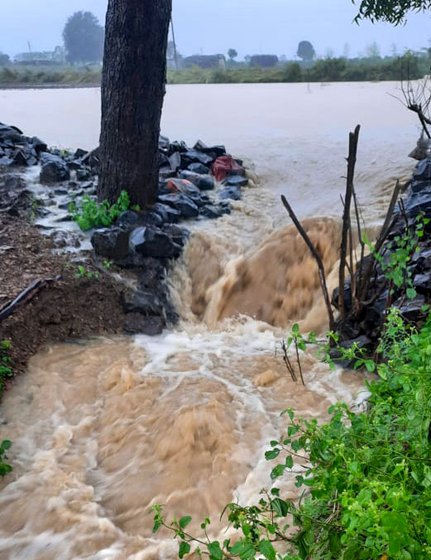 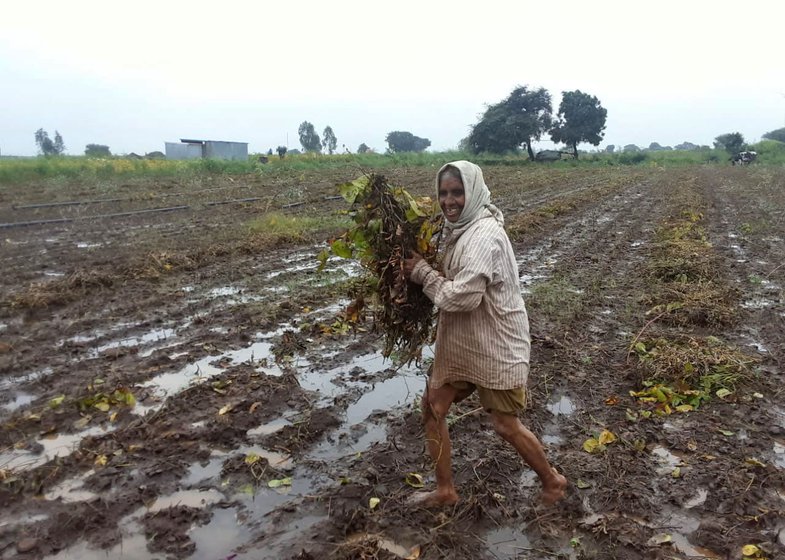 Whatever the outcome of the court case, farmers in Osmanabad seem to be losing faith in PMFBY because they are not able to rely on it. The Marathi daily Sakal , reported on August 3, 2021 that the number of farmers applying for PMFBY in Osmanabad has been dwindling each year. In 2019, 11.88 lakh farmers in the district had paid the premium, but in 2020 only 9.48 lakhs did. The number came down to 6.67 lakhs this year, almost one third less than the last.

Bibhishan has noticed marked changes in rainfall pattern in the last two decades or so. “The number of dry days has increased across the four monsoon months. But when it rains, it rains a lot,” he says. "It is disastrous for farming. Earlier, we used to have steady rainfall across the monsoon season. Now there is either drought or floods.”

Farmers in Marathwada started cultivating soybean about two decades ago because the crop can withstand inconsistent weather. “But the inconsistencies [in weather] that we have now are too much even for the soybean,” Bibhishan says. “The rains of October 2020 continue to haunt us.”

Osmanabad district magistrate’s report shows the extent of the farmers’ losses. A total of 6.5 lakh acres of farmland – equivalent to nearly 5 lakh football fields – was affected. Up to one third of the land owned by 4.16 lakh farmers was destroyed. Besides, four people and 162 dairy animals died in the deluge. Seven houses were completely destroyed, while 2,277 were partially wrecked. 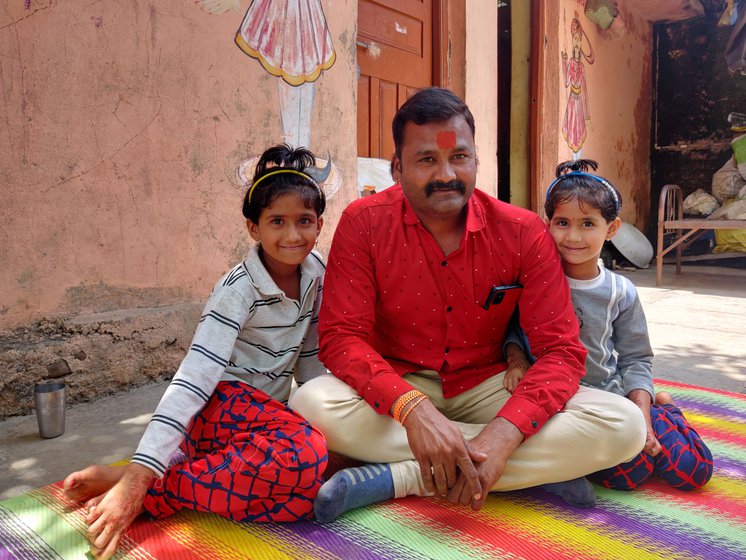 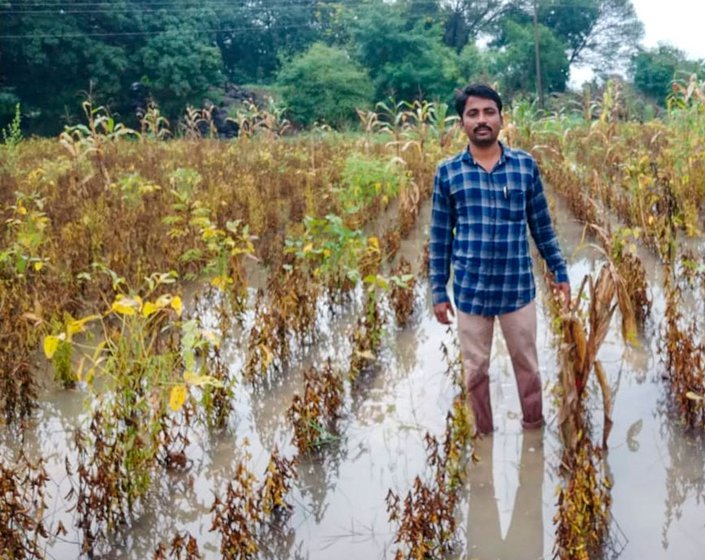 Gopal Shinde, 34, whose six-acre farm in Wadgaon was flooded in October 2020, says that if ever farmers needed insurance it was this year. “After the outbreak of Covid-19, we suffered losses because the markets were shut for months,” says Gopal, who lost 20 quintals of soybean to the rains, but received only Rs. 15,000 in insurance. “Prices of important crops fell badly. Many farmers couldn’t transport their stock to the market because of the [Covid] lockdown. We barely had enough to eat in those days. Even during such times, the insurance company profited at our expense.”

Several farmers, to supplement their income from farming, worked as construction workers, security guards or did other casual jobs, which they lost during the pandemic. Pandurang Gund worked as a truck driver, earning Rs. 10,000 per month, till Covid-19 broke out. “We lost an important source of income that sustained the household,” says Sharda.

He was still paying off the loan he had taken for his 22-year-old daughter Sonali’s wedding about two years ago. “We had borrowed close to two lakh rupees for her wedding,” says Sharda. The loss of work stressed out Pandurang, then the destruction of their remaining income source – the soybean crop – was the final straw.

One day in November last year, Pandurang hanged himself to death from a tree on his land.

Now Sharda manages the farm on her own, but it isn’t enough to keep the family afloat. Her 17-year-old son, Sagar, has started working as a daily wage labourer in Osmanabad, while her younger son, Akshay, 15, has taken up a job at a mobile shop as a delivery boy. Both have had to quit school. Pandurang died by suicide – but it has left three other lives hanging in the balance.