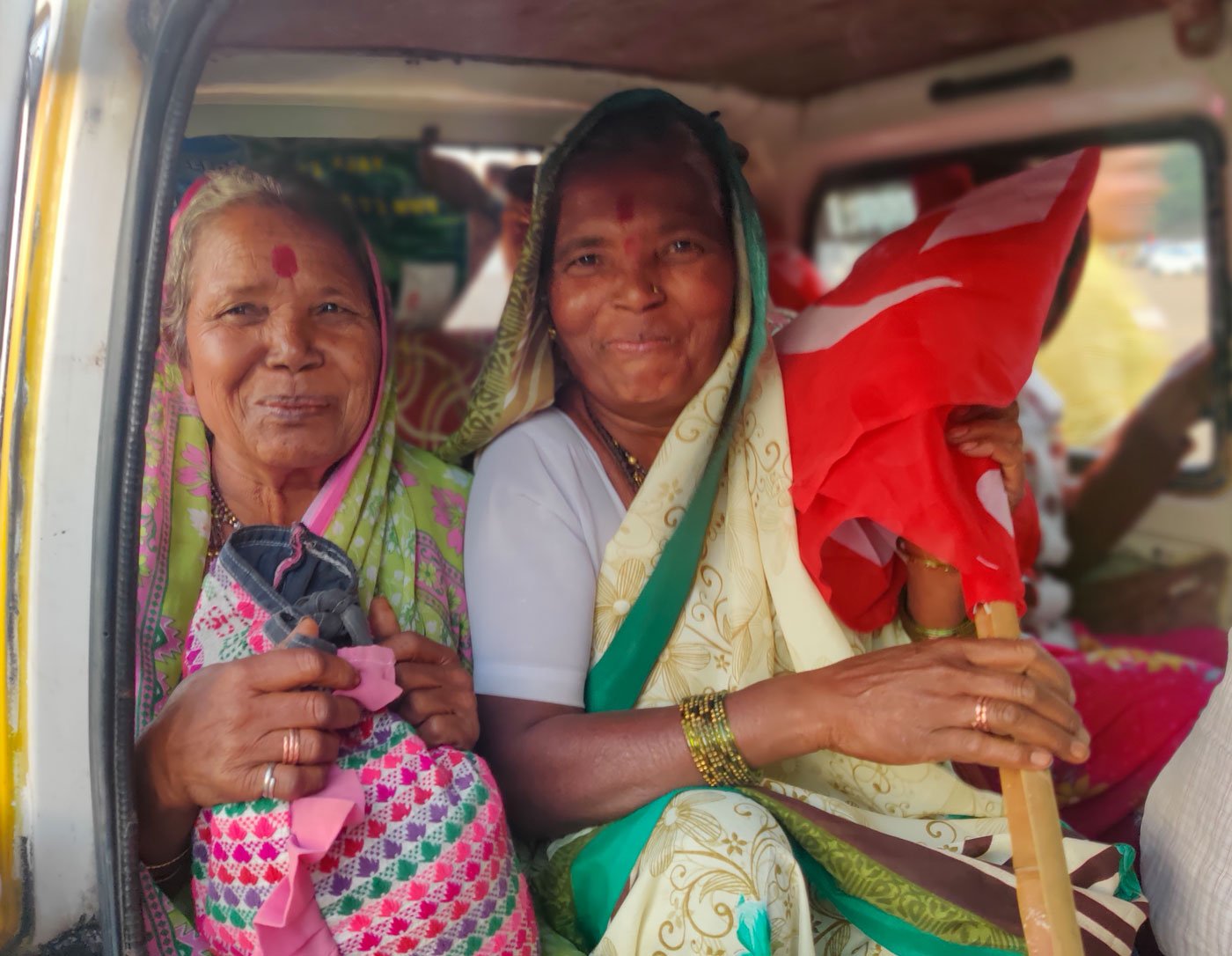 The Maruti van is full and ready to move. The farmers have occupied every available corner, some are even sitting in each other’s laps. Their bags and walking sticks are cramped in a sliver of space beyond the backseat.

But one seat next to Mangal Ghadge is conspicuously empty. She does not allow anyone to sit there – it’s ‘reserved’. Then Mirabai Lange walks up to the van, sits in that empty space and adjusts her saree, while Mangal puts her arm around her shoulders. The door shuts, and Mangal tells the driver, “ Chal re [Let’s go].”

Both Mangal, 53, and Mirabai, 65, are from Shindwad village in Nashik’s Dindori taluka . However, it’s not their decades in the same village but the last few years that have cemented their bond. “We are busy with work and home in the village,” says Mangal. “At protests, we have more time to chat.”

The two were together during the Kisan Long March from Nashik to Mumbai in March 2018. They travelled together to Delhi in November 2018 for the Kisan Mukti Morcha . And now, they are at the jatha , a vehicle rally from Nashik to Delhi. “ Pota sathi [for our stomachs],” Mangal says, when I ask her why she is participating in this protest.

Tens of thousands of farmers are protesting at three different sites along the borders of the national capital against the three farm laws pushed through by the central government in September this year. To express their support and solidarity, on December 21, about 2,000 farmers from Maharashtra assembled in Nashik to participate in the jatha going all the way to Delhi, roughly 1,400 kilometres away. They have been mobilised by the All India Kisan Sabha, affiliated with the Communist Party of India (Marxist).

Mangal and Mirabai are among this band of spirited protestors. 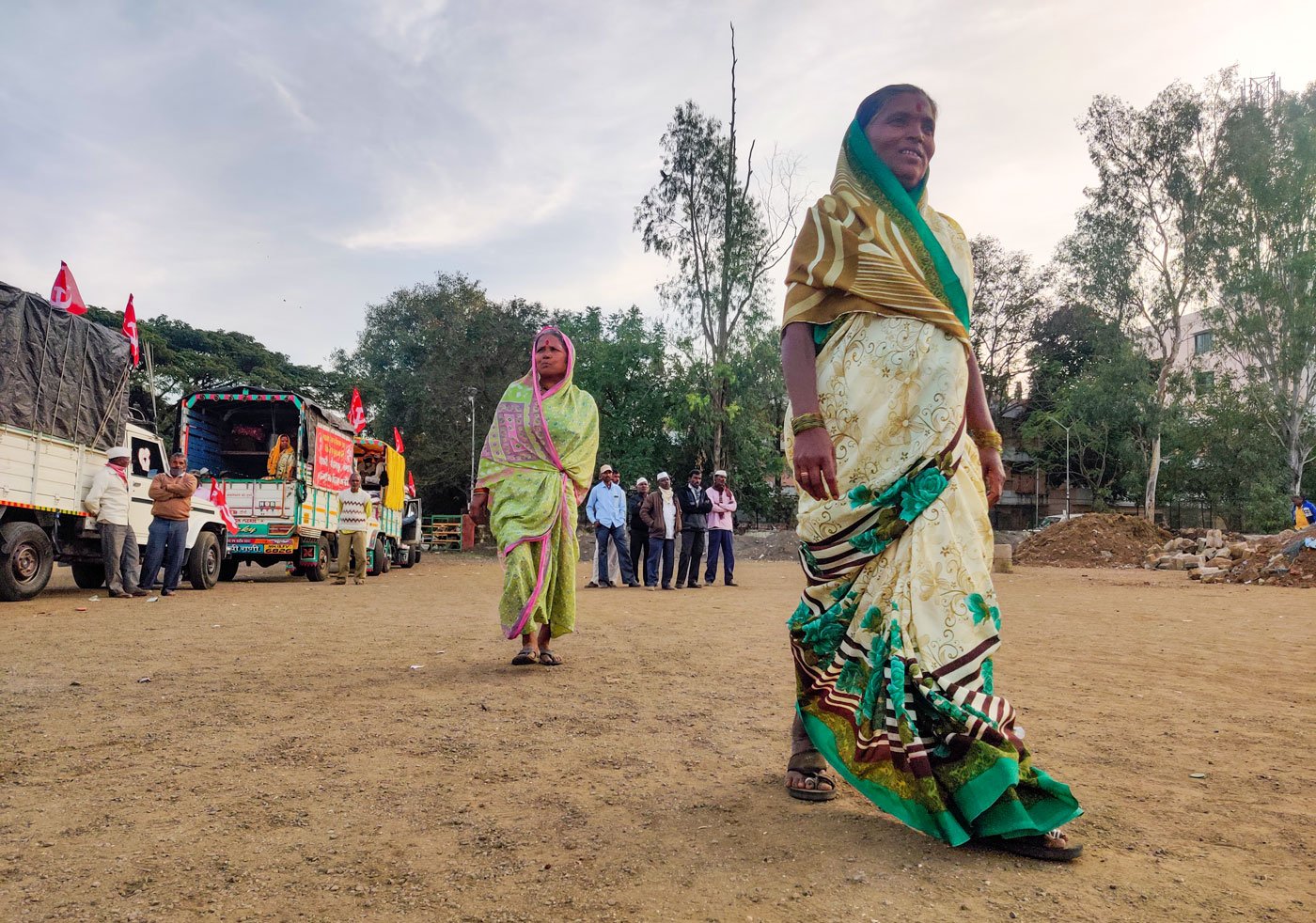 Mangal in front, Mirabai behind: the last few years of participating together in protests have cemented their bond

Wearing an off-white saree with a pallu wrapped around her head, Mangal has a “been there, done that” air about her. The moment the two enter the maidan in Nashik from where the jatha is to begin on December 21, she looks for the tempo they will camp in over the next few days on the road. Mirabai leaves all the enquiring to her. “I am looking forward to it,” says Mangal. “This is clearly an anti-farmer government. We admire the farmers for staging a sit-in [at Delhi's borders] and we want to offer our support.”

Mangal's family cultivates paddy, wheat and onions on their two-acre farmland, but her primary source of income is the Rs. 250 she receives as daily wages from agricultural labour. When she decides to participate in a protest that lasts up to a week, she renounces one-fourth of her monthly income. “We need to look at the bigger picture,” she says. “These protests are for the whole farming community.”

About 10 minutes into our meeting at the maidan , with vehicles lining up from one end to the other, Mirabai comes looking for Mangal. She waves at her and signals that we wrap up. Mirabai wants Mangal to go with her towards the stage, where Kisan Sabha leaders are delivering speeches. Mangal, instead, asks Mirabai to join our conversation. Mirabai is relatively shy, but both women farmers know exactly why they and the other farmers are protesting, and what the fallouts of the farm laws could be.

"Our harvest is mostly for our own family’s consumption," says Mangal. "When we do sell onions and rice, we sell these at the market in Vani.” The town of Vani in Nashik district, around 15 kilometres from their village, has a market yard where agricultural produce is sold through auctions by private traders. The farmers sometimes get the MSP (minimum support price), sometimes they don’t. “We know the importance of MSP and an assured market,” says Mangal. “The new farm laws will ensure those who had access to MSP will lose it too. It is sad that we have to protest all the time for our basic rights." 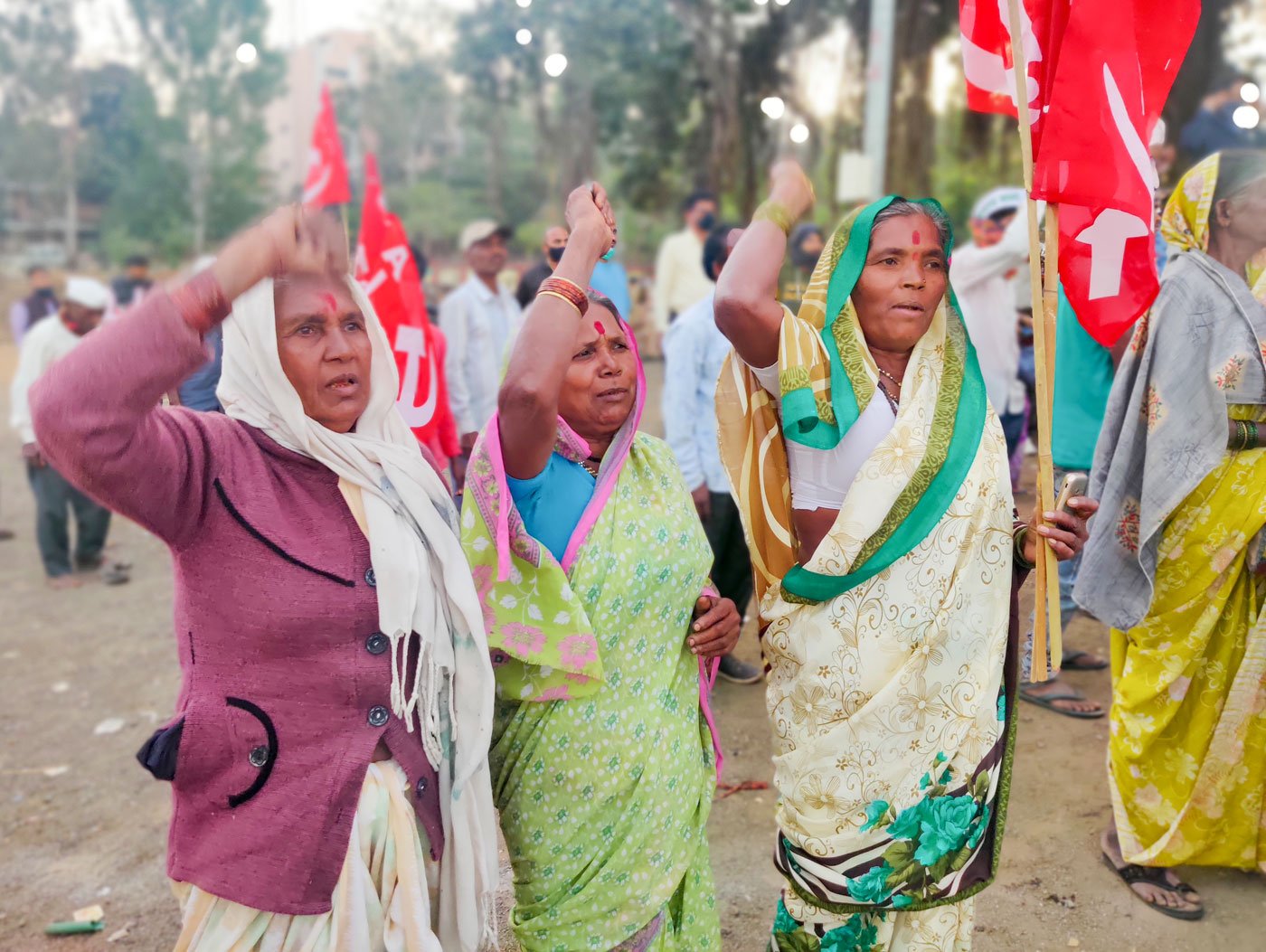 Mangal (right) is more outspoken, Mirabai (middle) is relatively shy, but both women farmers know exactly why they and the other farmers are protesting, and what the fallouts of the farm laws could be

In March 2018, during the Kisan Long March, when farmers – many of them from Adivasi communities – walked 180 kilometres to Mumbai from Nashik over seven days, their main demand was land titles in their names. "The process gathered a bit of speed after the Nashik-Mumbai morcha ," says Mirabai, who cultivates mainly paddy on 1.5 acres.

"But it was exhausting. I remember my back had started aching tremendously by the end of the week. But we made it. It was slightly more difficult for me than Mangal, considering my age.”

Throughout that week-long march in 2018, Mangal and Mirabai looked after each other. “I would wait for her if she got tired, and she waited for me if I did not feel like walking,” says Mangal. “That is how you get through tough times. It was worth it in the end. It took people like us to walk barefoot for a week for the government to wake up.”

And now, once again, they are on their way to Delhi to ‘wake up’ the Modi government. "We are ready to remain in Delhi until the government withdraws the bills," says Mangal. "We have packed a lot of warm clothes. This is not my first time in Delhi."

The first time Mangal had gone to the capital was in the early 1990s. "It was with Nanasaheb Malusare,” she says. Malusare was a towering leader of the Kisan Sabha in Nashik and Maharashtra. Nearly 30 years later, the farmers’ demands remain constant. Both Mangal and Mirabai belong to the Koli Mahadev community, a Scheduled Tribe, and have been cultivating land for decades that technically belongs to the forest department. "We don't own it, despite the law," they say, referring to the Forest Rights Act of 2006, which entitles them to ownership of the land. 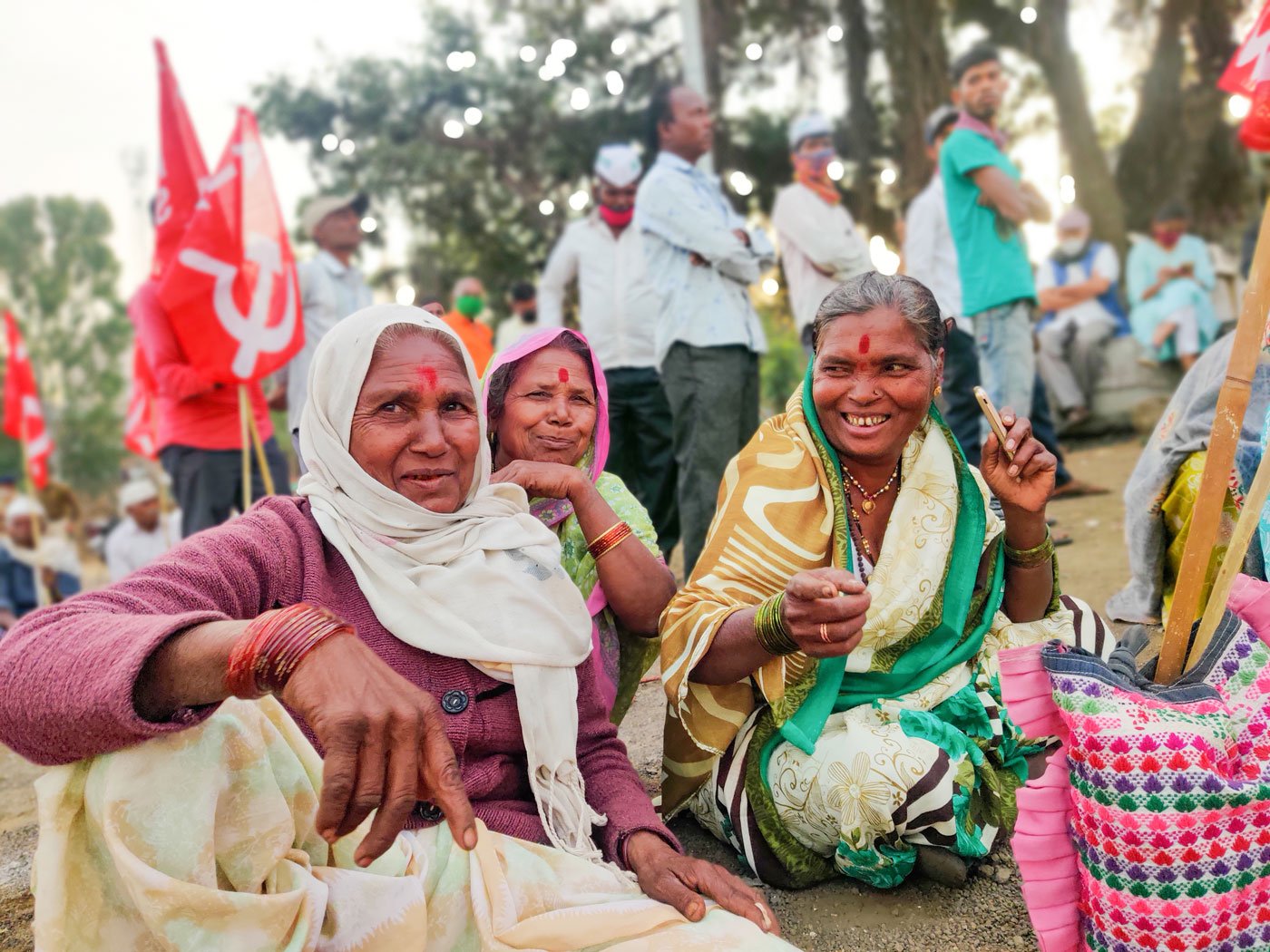 Since Mirabai is older, Mangal seems to be more protective of her. From holding a seat for her, to going to the washroom with her, they are inseparable

Like other protestors, they too are fearful about the new farm law that covers contract farming. Many have critiqued it, and said farmers entering into a contract with a large corporation could end up becoming bonded labourers in their own farmland. "We have been fighting for our lands for decades," says Mangal. "We understand the importance of having control over your own land. We have been fighting for it our entire life. We have made little gains. But in the process, we made friends through our common problems."

And their own friendship has flowered into a deep bond. Mirabai and Mangal know each other's habits now. Since Mirabai is older, Mangal seems to be more protective of her. From holding a seat for her, to going to the washroom with her, they are inseparable. When the organisers of the jatha distribute bananas to the protestors, Mangal takes an extra one for Mirabai.

At the end of the interview, I ask for Mangal’s phone number. Then I turn to Mirabai for hers. “You won’t need it,” Mangal says, breezily. “You can contact her as well on my number.”

Postscript: This reporter met Mangal and Mirabai on December 21 and 22. On the morning of December 23 the two of them decided to drop out of the jatha . When I spoke to them on the phone on December 24, Mangal said, “We decided to go back home from the Madhya Pradesh border because we could not handle the cold.” The chilly winds while travelling in the tempo, which is completely open at the rear, turned out to be too much to bear. Realising the winter is only going to get stronger, they decided to go back to their village, Shindwad, and not risk their health. “Mirabai particularly felt cold. I did too,” Mangal said. Of the 2,000 famers who had gathered in Nashik, around 1,000 have continued journeying beyond the MP border, going towards the country's capital city.