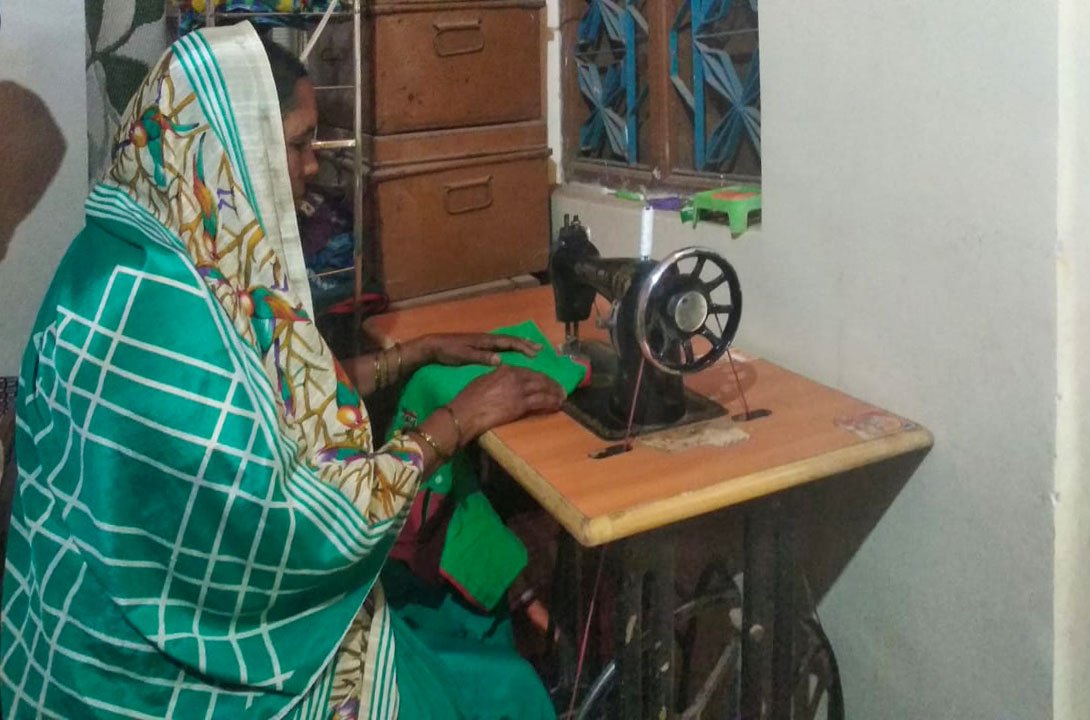 The poor have seen earnings plummet with Covid-19 and the lockdown. But no matter how high the distress, micro finance institutions in Marathwada continue to harass their helpless clients for loan instalments

Sheetal Waghmare dreads the sound of an incoming phone call. For several days, he sighed with relief if it was any number other than the one he wanted to avoid – that of a recovery agent working with a micro finance institution (MFI). “They do not care about coronavirus,” says 31-year-old Sheetal. Mercifully, the calls subsided around a week ago. Sheetal is not sure why. But, he says, “But they can start again…”

Waghmare’s family members work as daily wage labourers, and live in Osmanabad in Maharashtra’s agrarian region of Marathwada. In July 2019, Sheetal’s mother, Mangal, borrowed Rs. 60,000 from an MFI called Janalakshmi Financial Services. “We bought a sewing machine, and I started stitching blouses, doing embroidery and so on,” says 53-year-old Mangal. “My husband and my son work as farm labourers. We do not have land of our own.”

Since then, the Waghmare family has not missed a single instalment of Rs. 3,230 per month on the 24 per cent interest loan. “But we have made absolutely no money since the lockdown,” says Sheetal. “Nobody around us has any money. The purchasing power of everyone has reduced during the lockdown [that began on March 23 in Maharashtra]. Nobody is hiring us as labourers, and nobody can afford to get clothes stitched either.”

That has not stopped the MFIs from phoning borrowers and insisting they must pay the instalments, regardless of the circumstances. “They told us to pay up no matter what,” says Sheetal. “Do whatever you have to, they said, but pay by the end of the month.” 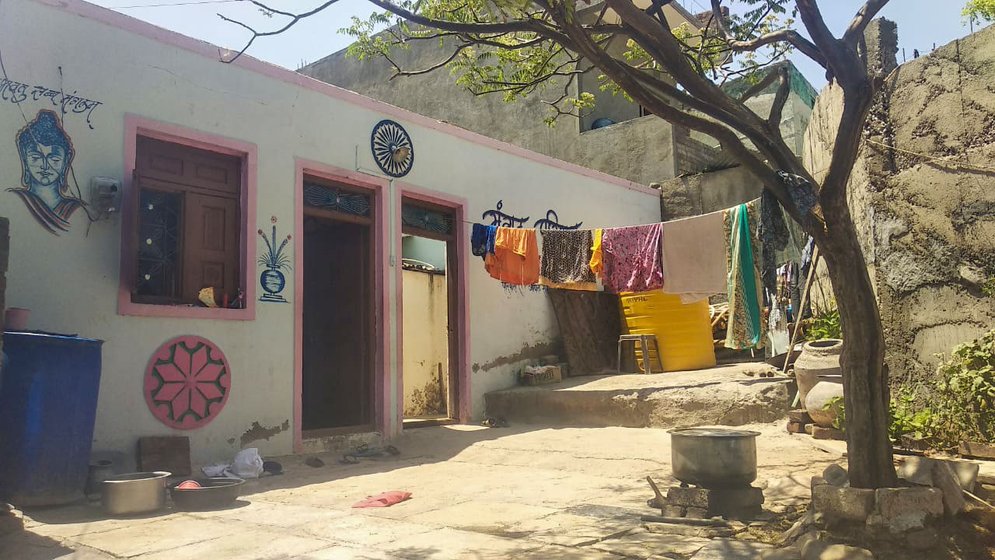 Sheetal Waghmare's home : the family has not missed a single instalment of the 24 per cent interest loan. 'But we have made absolutely no money since the lockdown', says Sheetal

Repaying Rs. 77,520 in exchange for Rs. 53,000 is 46 per cent more than the amount borrowed. But many apply for such loans because they come through easily, says Raju Shetti, farm leader and founder of the Swabhimani Shetkari Sanghatna. He and others observe that MFIs exploit the poor under the pretext of offering help. These financial institutions – regulated by the Reserve Bank of India – typically offer loans to low-income families and individuals, who want to start something of their own.

“The MFIs target landless labourers, small time contractors, marginal farmers, and so on,” Shetti says. “Banks usually do not give them loans because they don’t possess collateral. MFIs only ask for identity proof and release the money quickly. Most ordinary people are desperate and hopeful when they plan to chart a new path.”

The Waghmares had these hopes too. They even managed to pay the instalments. “But who could see the pandemic coming?” asks Sheetal, whose father, Vasant, has a heart ailment. “He had to undergo an angioplasty two years ago, and has to take regular medication even today. He sits at home the whole day and watches the news. The atmosphere is tense due to coronavirus. People are concerned about finding work because of the lockdown. And we cannot go out because if we catch the virus, my father would get into serious trouble.”

Sheetal knows well how important it is to protect his family, especially his father. The family – they belong to the Mahar community – lives in the Dalit basti. The colony is right next to the district hospital in south Osmanabad – which is ill-equipped to handle complex cases and refers patients to the district hospital in Solapur town, around 70 kilometres away. “You know how health facilities are in rural areas,” Sheetal says. “And the priority of the hospitals right now is to deal with coronavirus.” 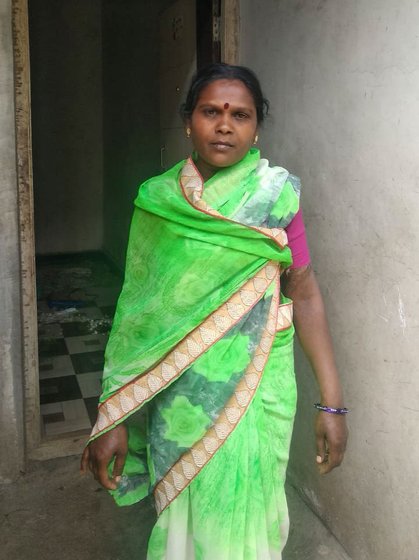 Archana Hunde seeks an extension on paying her loan instalments

Solapur district has reported around a 100 cases of Covid-19. The authorities had sealed the district on the midnight of April 24 for three days, after the cases began increasing. “It means if cases rise in Osmanabad [so far there are only a few], the patients won’t even feel confident to go to Solapur,” says Sheetal. “But none of this matters to the recovery agents.” Around 42 MFIs operate across Maharashtra, Anil Bonde former agriculture minister of Maharashtra, told me on the phone. Their lending, Shetti estimates, runs into thousands of crores.

“They have a history of intimidation, of harassing women as well,” Bonde says. “They threaten to take away their borrowers’ tractors, or confiscate their farm produce. The state should take stock of how many MFIs are functioning in Maharashtra and stop their working at the time of a pandemic.”

Over the last decade, MFIs have flourished in a void created by the 31 cooperative banks in Maharashtra – most of them, thanks to wilful defaulters and mismanagement, are unable to disburse loans. Since the other option is high-interest sahucars (private moneylenders), MFIs are seen as a middle route, says Devidas Tuljapurkar, joint secretary of the All India Employees Bank Association. “The RBI has purposely let the micro finance institutions flourish and exploit the situation,” he says. “They enjoy impunity, threaten their defaulters, and operate as sahucars legitimised by the system.”

On April 7, even India’s banks, private as well as nationalised, offered a (contentious) three-month moratorium considering the economic slowdown triggered by the coronavirus. MFIs though seem to be functioning as if it’s business as usual.

The representative of Janalakshmi Finance in Osmanabad did not respond to several phone calls from this reporter.

In the same self-help group of borrowers as Mangal is Archana Hunde, who too belong to the Mahar community, a Scheduled Caste. Her husband, Pandurang, 40, is a small-scale contractor, providing raw material and workers at construction sites in Osmanabad town. The sites are now shut because of the lockdown, and Pandurang has no work. “We have been repaying the loan regularly,” says 37-year-old Archana, whose instalment and loan amount are the same as Mangal’s. “We are not asking for a loan waiver. All we are imploring them is for an extension of three months. Instead of concluding the instalments in two years, let us repay in two years and three months. Is that too much to ask for?” 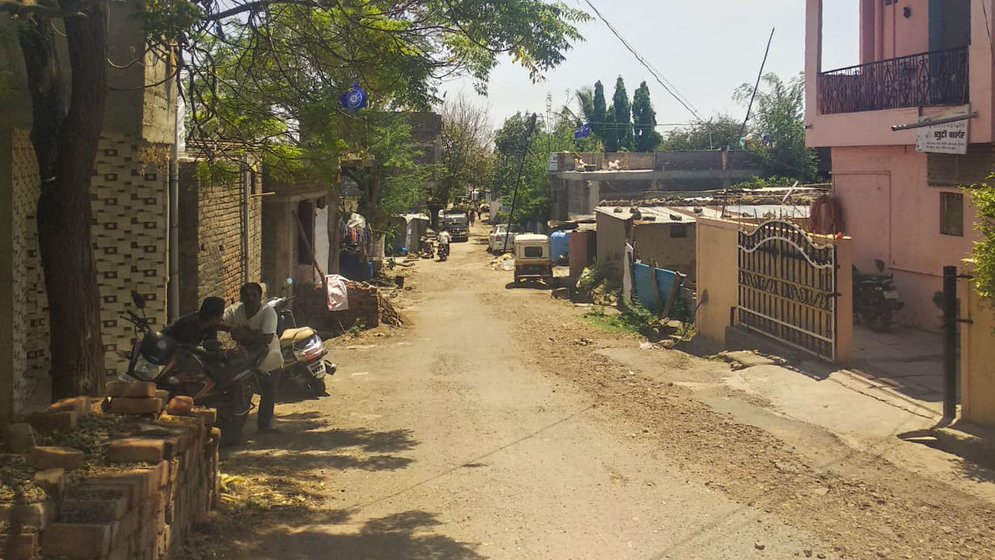 Archana says the families in the Dalit basti are not starving during the lockdown only because they have received a month’s ration – wheat and rice – in advance from the government. “Otherwise, we would not have been able to buy food either,” she says. “The desperation to get some cash in hand is such that since the finance minister announced [on March 26] that Rs. 500 will be deposited in women’s Jan Dhan accounts, people have been queuing up since early morning. The banks are crowded every day.”

The anxiety of dealing with MFIs is acute in Latur’s Khuntefal village too, around 58 kilometres from Osmanabad town. Many in the village, along with many in neighbouring Matephal village, have borrowed from MFIs, says a local farm activist. Among them is Vikas Shinde, 35, who borrowed Rs. 50,000 in February this year. “I have a small landholding of 1.5 acres,” he says. “It is hardly enough to sustain a living, so I also do labour work too. Two months ago, I took that loan to buy a cow and start dairy farming.”

Now, with the lockdown, Vikas, who lives with his wife and two children, is unable to pay the monthly instalment of Rs. 3,200. “Because of the lockdown, I could not sell my rabi harvest,” he says. “The wheat is still lying in the farm. It has become almost impossible to transport your harvest to the mandi . What do we do now?”

The state government, Shetti says, must intervene to ensure that farmers and labourers are not intimidated and looted during a pandemic. “The MFIs will not understand any other language,” he says. “The law must be used to bring them in line.”

Maharashtra’s agriculture minister, Dada Bhuse, told me on the phone that the state always tries to ensure that people can take loans from traditional financial institutions (such as cooperative banks). “But it is true that several people get loans from MFIs because of the ease with which the money is released,” he says. “I will ask the collectors of the districts to look into it and see what can be done.”

Until then, though, borrowers like Sheetal and Archana and Vikas are living in dread of the MFI recovery agent’s call. The phone could ring any time.