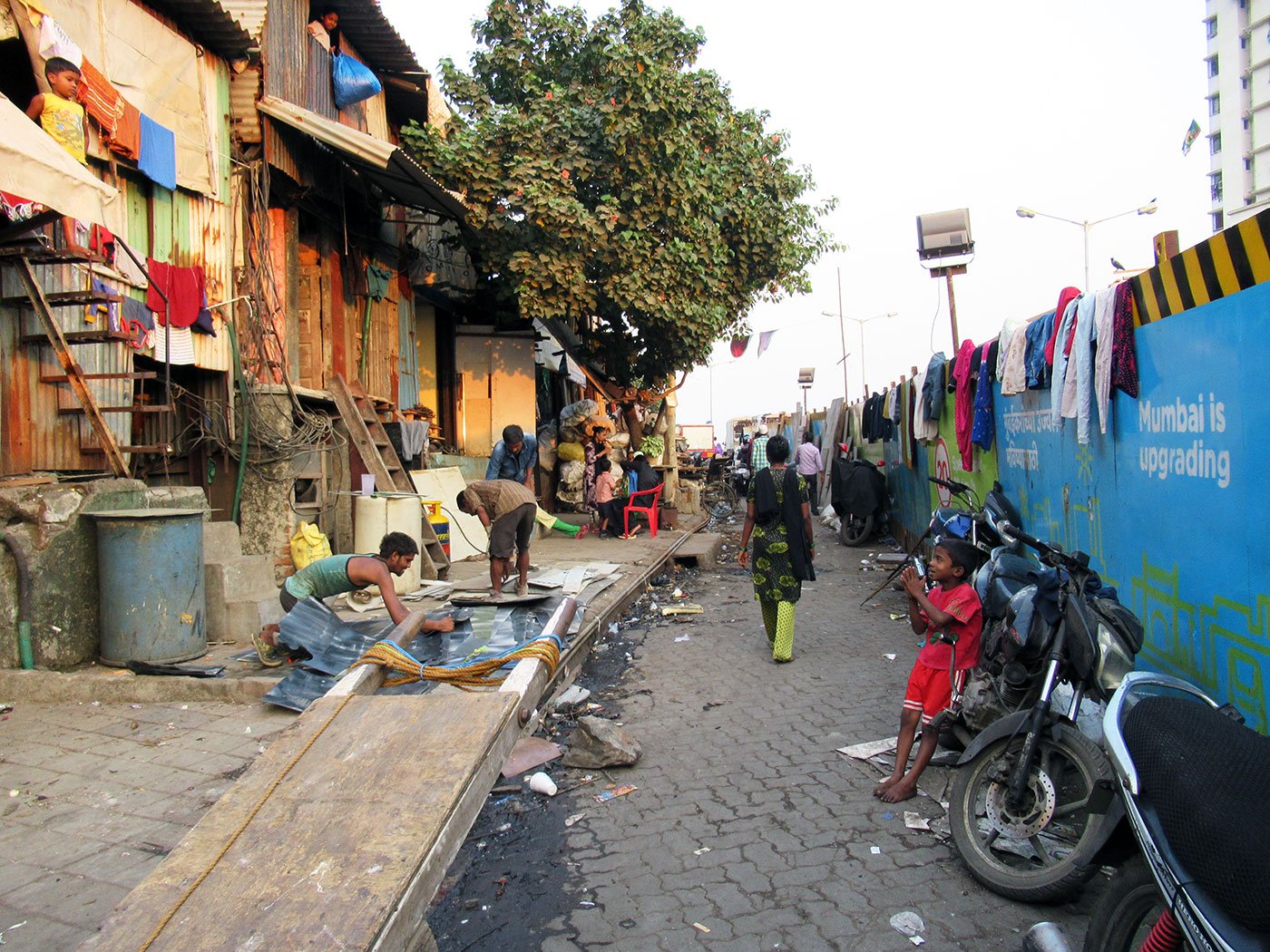 'In my village, I could laugh easily'

The story of Ainul Shaikh, who came to Mumbai from Amroha in UP, is that of a resilient spirit, a tenacious survivor. She has braved poverty, abuse and life on the streets to bring up her children with dignity

When Ainul sat in the early morning Kashi Vishwanath Express to come from Amroha to Delhi, she was full of apprehensions. “I was afraid. I kept thinking I am going to Bambai. I am going so far away. How will they behave with me? How will I manage?” Her anxiety kept the 17-year-old awake all night in the general ladies compartment.

Her father-in-law Alim was travelling on the same train. After taking another train from Delhi, they got off at Bandra Terminus. He then took Ainul to her new home in the Nayi Basti slum colony in Mahim, before resuming his work as a beggar outside the Makhdoom Ali Mahimi Dargah.

Ainul Shaikh too would do this work for a while three years later. It would help pay for her 18-month-old son’s stay at Kasturba Hospital in central Mumbai for many weeks – with what illness, Ainul does not know. “I could not get a loan from anyone [for the medical bills] because who would repay it?” she asks.

Her anxieties on that train to Mumbai had not been misplaced.

That day on the Express, with Ainul was only a cloth bag containing a few clothes. The utensils she had bought piece by piece to take to her marital home had all been sold. She had worked hard as a young girl for years – washing other people’s utensils, cleaning houses, labouring in the fields. “I’d be given food or a few rupees. I’d put the money in boxes and, karte karte , I saved for my marriage. I must have saved 5,000 rupees. I’d take small sums to a local shop and buy brass watis, thalis , ladles, even a copper dekchi. ” 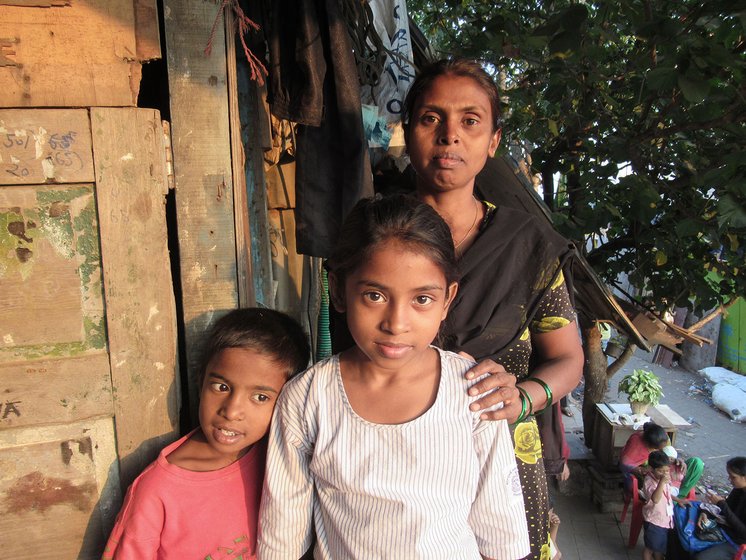 Ainul Shaikh with her younger son Junaid and daughter Mehjabeen; her older son Mohammed refused to be photographed

When she got married and moved to her husband Jameel’s house in the same mohalla in Amroha, he steadily sold them off to feed his alcohol habit. And for more than 10 years after she alighted at Bandra Terminus, he often beat her till she bled. The violence started soon after she came to Mumbai, she does not recall when exactly. “I phoned my mother,” Ainul says. “She said you have to live there, see it through…”

Besides the sold utensils, Ainul was leaving behind her family in Batwal mohalla , on the (then) rural outskirts of Amroha town in Jyotiba Phule Nagar district of Uttar Pradesh – her mother, two sisters and three brothers. Ainul’s father, a barber, had died a few years ago. “We are from the Salmani jaat ,” she says, sitting on the floor in her mezzanine single-room home of tin and asbestos at the edge of Dharavi. “The men in our community are traditionally barbers. Abba would sit under a chappar and shave and cut hair, and earn a few rupees at a time. We were very poor. Ammi would sometimes give us six children warm water to fill our stomachs, or a piece of jaggery to quell our hunger. We didn’t even have proper clothes, and wore mismatched chappals – if one was blue, the other was black – held together by safety pins.”

Ainul, the youngest of the six, didn’t go to school at all. As soon as they could, all the siblings started working – one brother as a helper in a garage, two as rickshaw-pullers. Her mother rolled beedis at home along with Ainul’s eldest sister (both later developed tuberculosis), and earned Rs. 50 from an agent for 1,000 beedis . Ainul, along with her older sister, started going to the fields in nearby Joya village to work as a labourer, usually earning in foodgrains that would add to the family's sparse monthly rations. “But in those days,” she says, “I would just work and not worry, I was able to relax and laugh.”

Over time, the Shaikh family managed to build a fairly spacious house, extending from her father’s workshed. Her mother trained, under a local organisation’s scheme, to be midwife, and started earning a bit. But when she was around 13 (Ainul, now in her 30s, has a sharp memory for details, but on age and years she is hazy), her often-ailing father became ill with paralysis for more than two years. The illness plunged the family deep into poverty again. “We tried hard, the people from our mohalla helped too. But we could not save him.” When Ainul was around 15, her father died. By the time she was 16, her brothers had arranged her marriage.

For a while, Ainul stayed at her father-in-law Alim’s house. He would spend some months in Mumbai making money from begging, she says, then a few months in Amroha living off those savings. Her husband Jameel’s mother had died a while ago, his brother was also a barber in Batwal mohalla . About a year after her marriage, Alim brought Ainul to Mumbai. 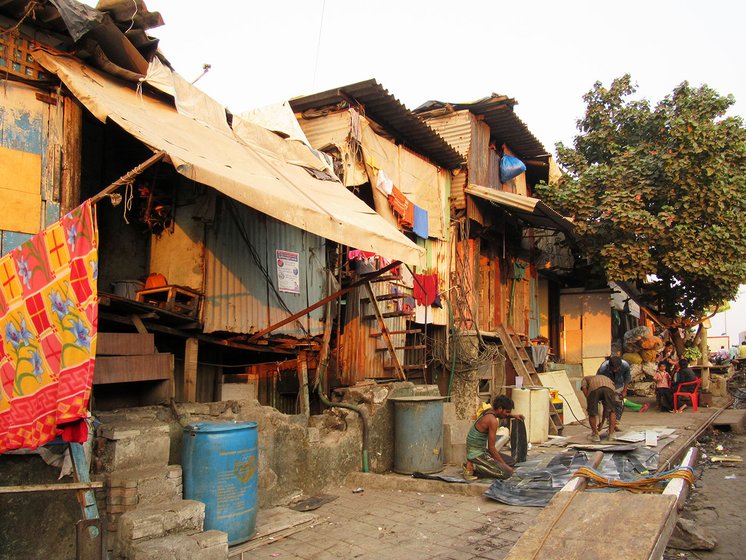 The street where Ainul's one-room home is located

Jameel did odd jobs – as a porter in the recycling sector in Dharavi, earning Rs. 150-200 a day, travelling as a helper on trucks carrying rice and wheat to Uttar Pradesh. Alim would help them with some money every now and then. Although he was dissolute and liked to gamble, Ainul says, he was a buffer for her.

For some years after coming to Mumbai, Ainul didn’t work for an income. “I’d ask my husband to let me go to the dargah to beg,” she says, “I asked him if I could do domestic work, but he wouldn’t let me go anywhere. He would give me Rs. 30 every day and I had to manage everything in that. Our neighbours were kind and sometimes gave us leftovers.” When her first-born became sick, defying Jameel’s strictures, Ainul stared going to the dargah to work.

When Alim died around eight years ago, “a very bad time started.” Jameel, always a violent man, became even more brutal. “I’ve been beaten a lot,” Ainul says. “I’ve heard a lot of dirty abuses from him. He shoved me on to the railway track in Mahim once and asked me to die.” She shows me the old injury – when her knee split open – from that fall. “He would beat me by hand, with sticks, with a chimta , whatever he could find. What could I do? I had to bear it.”

Through all this, Ainul had three children – two sons, Mohammad, now 15, Junaid, 9, and a daughter, Mehjabeen, 11. “Sometimes, people asked me to leave my husband,” she says, “but what would happen to my children? In our biradari they would not then agree to their marriages.”

After a while, Ainul met a woman at the dargah who employed her as a house help for Rs. 600 a month. Since then, Ainul has done a series of jobs –  in the ‘ wadi line' or catering work where contractors take labourers to wedding sites to clean dishes, as a nurse in a home in suburban Jogeshwari.

Over the years, she has stayed – with her children, her husband often sleeping on nearby pavements – in tiny rented rooms in Mahim-Dharavi, and a few times out on the streets. Renting a room in Dharavi usually requires a deposit of at least Rs. 5,000. Ainul often didn’t have that small capital. “But slowly I got to know people, and would get a room without a deposit. I’ve had to leave many rooms [for want of rent], come to the street, stay there, find another room, leave…” 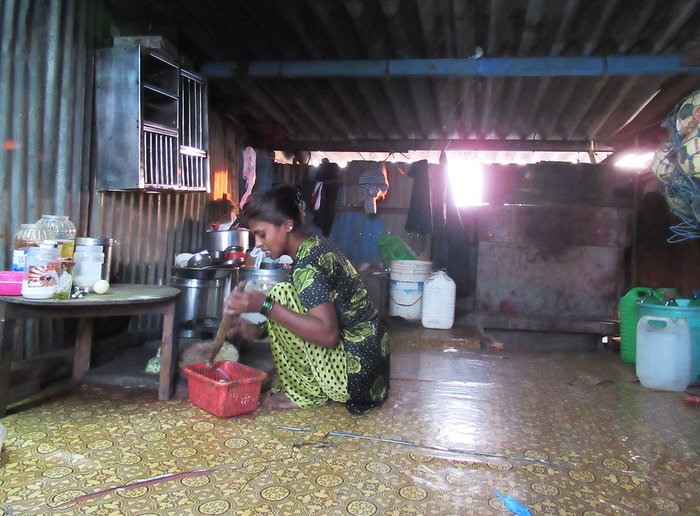 Ainul at home, in a place where she has now found some stability

Over the years, Ainul has stayed – with her family – in tiny rented rooms in Mahim-Dharavi, and a few times out on the streets. 'I’ve had to leave many rooms [for want of rent], come to the street, stay there, find another room, leave…'

In January 2012, a fire started in her basti . “It was around 3 a.m., everyone was sleeping,” Ainul recalls. “We climbed onto the roofs and ran.” After the fire, she and her children stayed on the pavement at the Mahim-Sion bridge for eight months; her husband was there too. “The monsoon was a very difficult time,” she says. “When it poured, I’d take my kids and sit under the shelter of a nearby bhangar shop.”

Local organisations and leaders helped the people affected by the fire, Ainul says. She too got grains, utensils, buckets, a stove, mats. Slowly, as Ainul’s circle of friends and acquaintances grew, through them, around two years ago, she found the room the family now stays in on the bridge. Unlike similar airless rooms, it has a large window and some breeze. “It’s like a terrace there,” she tells me with some pride.

Since March 2015, Ainul has got a job as a waste paper sorter at a local non-profit organisation that works on recycling and other issues. It gives her a steady monthly salary of Rs. 6,000 – and it’s given her a sense of self-worth. From her salary, she pays Rs. 3,500 as room rent, and around Rs. 1,000 is spent on grains, flour, some vegetables every month – the family’s ration card was lost in the fire, and Ainul has not got another since. The rest of her income covers electricity and other expenses. “I feel good now when my children eat till their stomachs are full,” she says.

The family uses the public toilet block nearby. Water from a community tap costs Rs. 200 a month (to be given to a local strongwoman); Ainul fills it every evening between 7-8 p.m. – in buckets, dabbas , bottles. "My son Mohammad helps fill and carry these,” she says. Her daughter Mehjabeen, sharp and busy with her schoolbooks when I visit, is in Class 6; her younger son Junaid, shy and smiling, is in Class 2, both in a nearby municipal school. 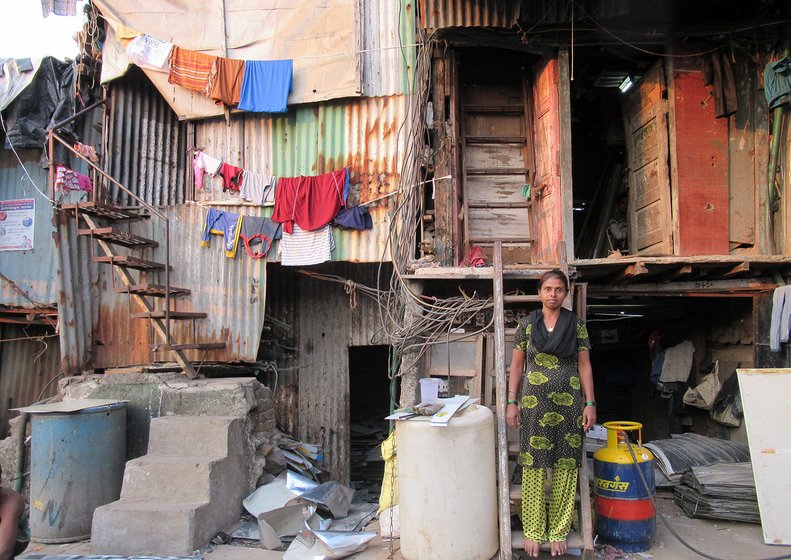 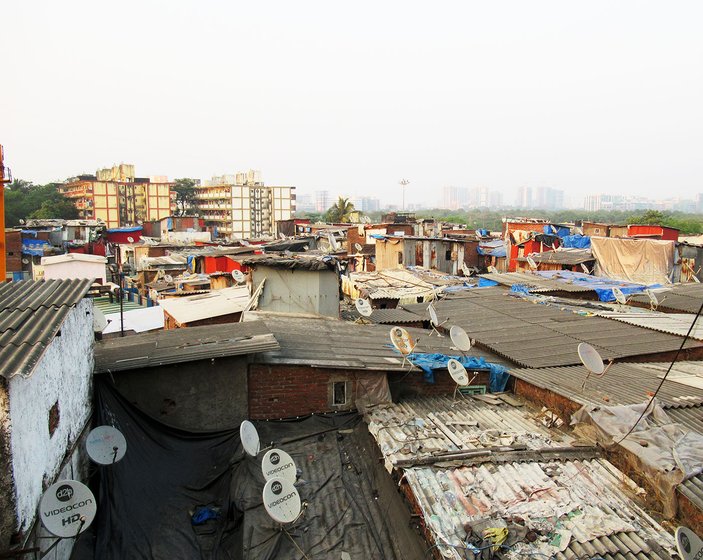 To reach Ainul's home, you have to climb these two vertical ladders she is standing against. Right: The view from her window, of a slice of 'Bambai'

Mohammad dropped out of school after Class 5, and occasionally works as a welder’s helper for Rs. 100 a day, or sometimes earns a bit delivering books for a neighbour. His ambitions are small – to have his own pavement bookstall like their neighbour, or become a mechanic, like his uncle. Or, he says, “I really want to be a barber, like others in my biradari , but I have to learn the trade… So I’ll do any work, it’s okay, and will earn and give my mother some money.”

Mohammed now tries to stop his father when he wants to hit Ainul. So Jameel just shouts and shouts at her. The beatings, hard work, and hunger of years have taken a toll on Ainul’s health — she is pale, has blood pressure problems, frequent headaches.

A few times, Ainul has gone back to Batwal mohalla . There, she stayed with her mother until she, long ailing from the effects of tuberculosis, passed away. “She would send me some money, she tried to help… my Ammi,” Ainul says, softly. She still visits her hometown every few years, and is even now preparing to take the train back to Amroha for her niece’s wedding.

“In my heart I have this desire that I should be able to build a small house for myself in my hometown. That when I die, it should be on my own soil. My heart is not in Bambai … this city suffocates me… In my gaon , even if we were hungry, we managed. My memories are there, my childhood was spent there. I could laugh easily there.”