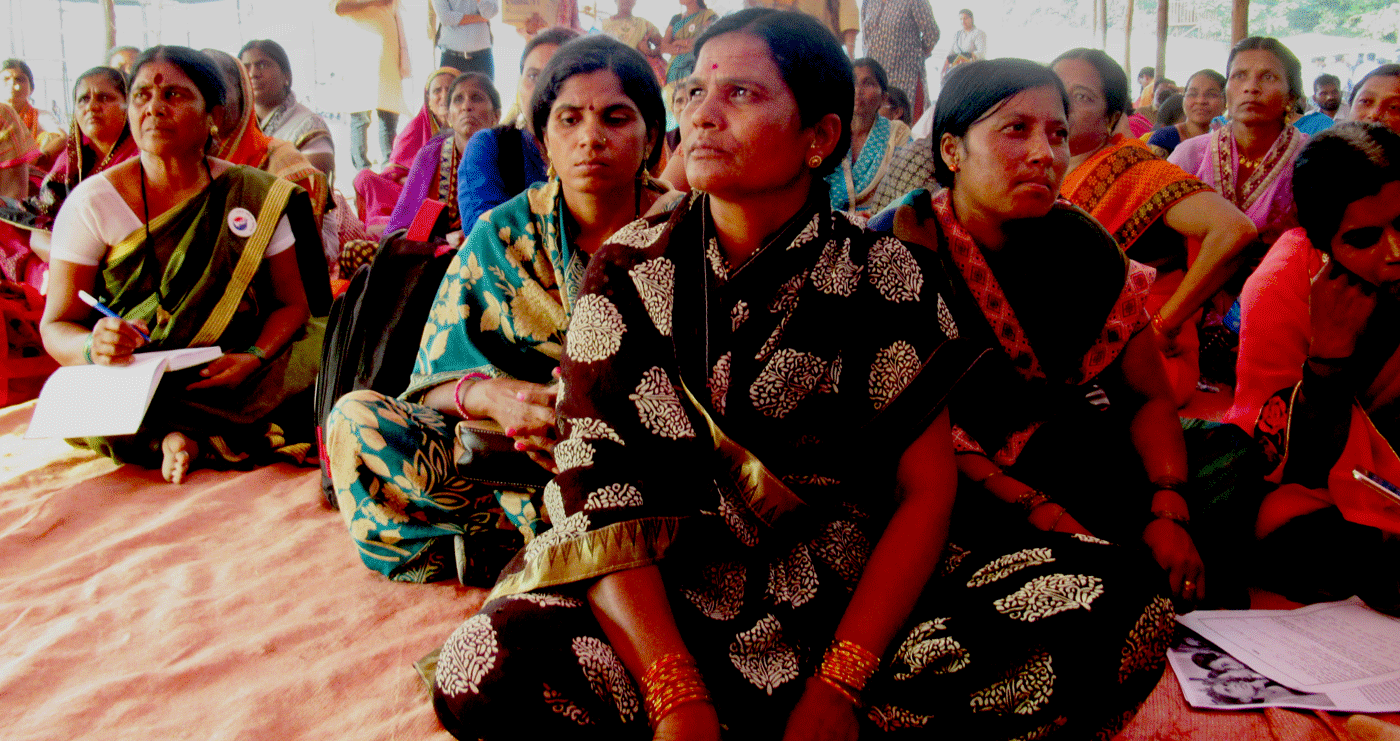 Life after death on the farm

Tens of thousands of farm widows in Maharashtra – all of them farmers too – find themselves in a morass of loss, grief, debt, penury, harassment, and miles of paperwork and bureaucracy, after their husbands' suicides

After digging 60 feet deep, Pandurang Adsul and the labourers he hired still did not get “even a glass of water” from the earth, says his widow Indubai. “He tried to bring water to the village, and this is what happened.”

In 2012, determined to dig a well and put an end to his family’s incessant worries about water for their cotton and soyabean crops, Pandurang had taken a bank loan of nearly Rs. 1 lakh, besides various other amounts from relatives. He planned to repay all his debts with the robust harvests he hoped to get by using the well water.

But the earth would not yield any water in Bhogaji village in Kalamb taluka of Osmanabad district, in the drought-prone Marathwada region. Anxiety about the debt slowly burrowed deeper than the well into Pandurang. In 2014 (Indubai does not recall exactly when), he hanged himself in their house. “I was in the field,” she says. “A neighbour ran there to tell me he had locked himself in…”

While still emotionally struggling with the loss, another round of battles soon began for Indubai: her husband’s suicide was not accepted as ‘eligible’ according to the peculiar criteria decided by the government (partly aimed at bringing the agrarian suicide numbers down on paper). If Pandurang had managed to kill himself according to the official guidelines, Indubai would have received Rs. 1 lakh as compensation from the state government – Rs. 30,000 in cash and Rs. 70,000 in a bank fixed deposit. 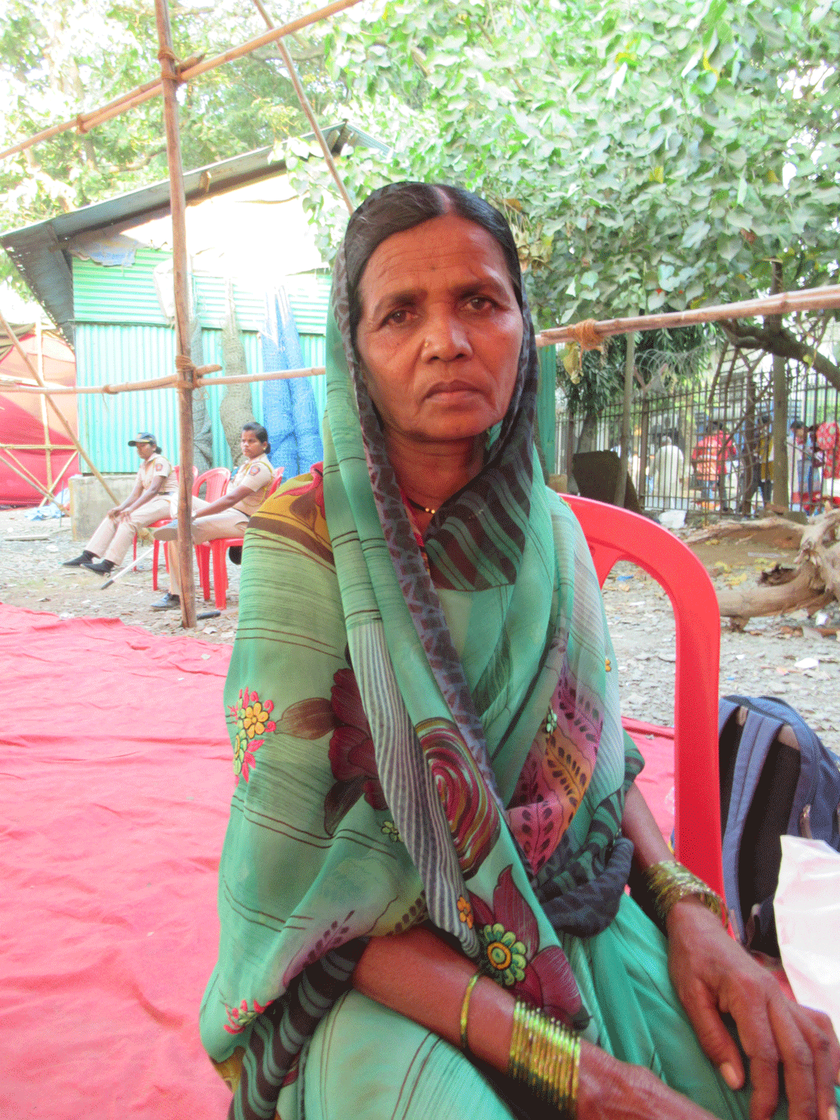 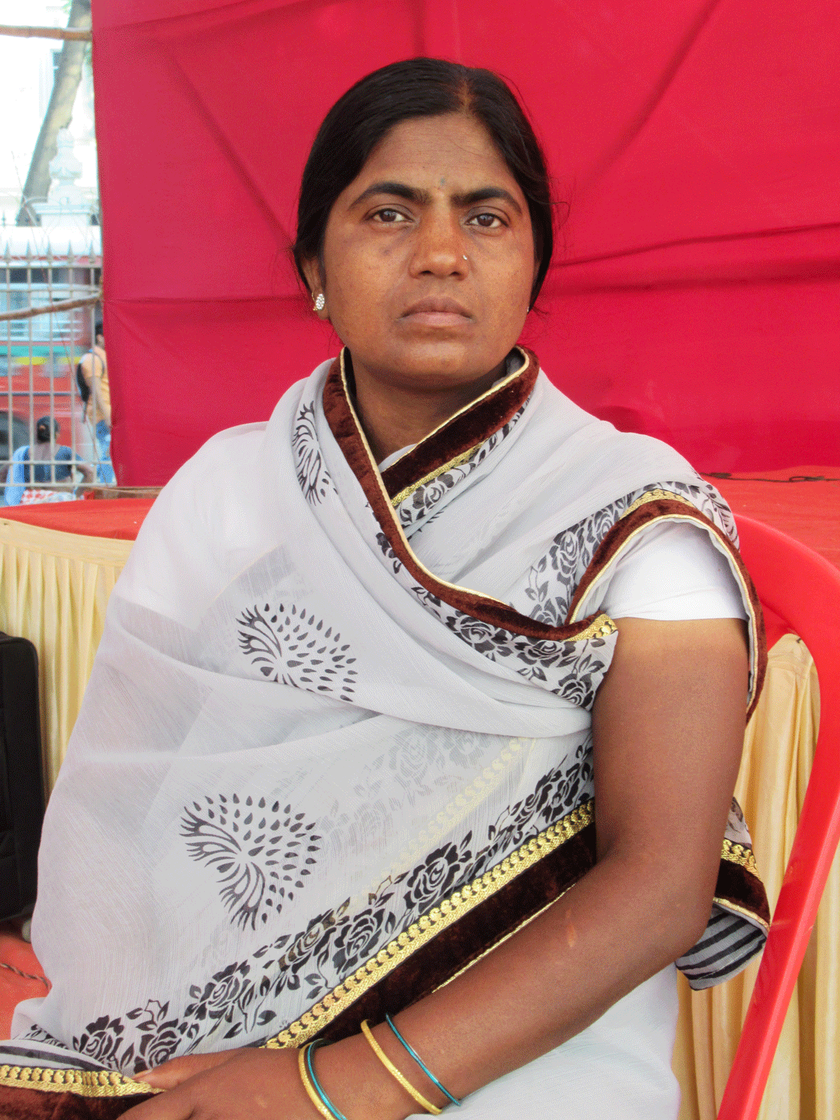 Like many farm widows, Indubai Adsul (left) of Bhogaji village does not know the exact amounts her husband owed. Sangeeta Kokre (right) of Mardi village was plunged into a bewildering labyrinth of paperwork after her husband's suicide

She does not know why his suicide did not ‘qualify’ for compensation. “They don’t tell us…” she says, her face crumpling as we talk one afternoon this week at Azad Maidan in south Mumbai. “I have made rounds after rounds of all the offices…” Indubai, who is in her 40s and from the Maratha community, has not even received the state’s widow’s pension— a paltry Rs. 600 per month. “I gave Rs. 3,000 to a man [possibly a tout] in a neighbouring village, plus all the papers. But there is no pension so far.”

And she is struggling to repay her husband’s loan, a total for Rs. 4 lakhs, she estimates.  Like many farm widows, Indubai does not know the exact amounts he owed, nor the precise terms of the loans. The extent of the debt, in many farm households, comes as an added shock to the wife after her husband’s suicide.

Indubai’s two sons, both married, work with her on their four acres, and all of them also work as agricultural labourers on other farms for Rs. 150 a day each, whenever this work is available. “How will I repay his loan when it’s difficult for me to even manage my house?” she asks. “I don’t want any keem [scheme] now, just give us a karja maafi … [loan waiver]?”

At least though, making her way through a maze of debt, distress and bureaucracy, Indubai managed to get the farmland title transferred in her and her sons’ names. Sangeeta Kokre is still struggling with even that title.

After her husband hanged himself at their home in March 2017, she was plunged into a bewildering labyrinth of paperwork and proof – copies of his Aadhaar card, his death certificate, her Aadhaar card, their voter identity cards, the family’s ration card, electricity bills, three photographs – and more. Various combinations of these and other documents had to be given to numerous government departments to get her widow’s pension, to try and transfer their one-room tin house in her name, to grasp some desperately-needed relief. 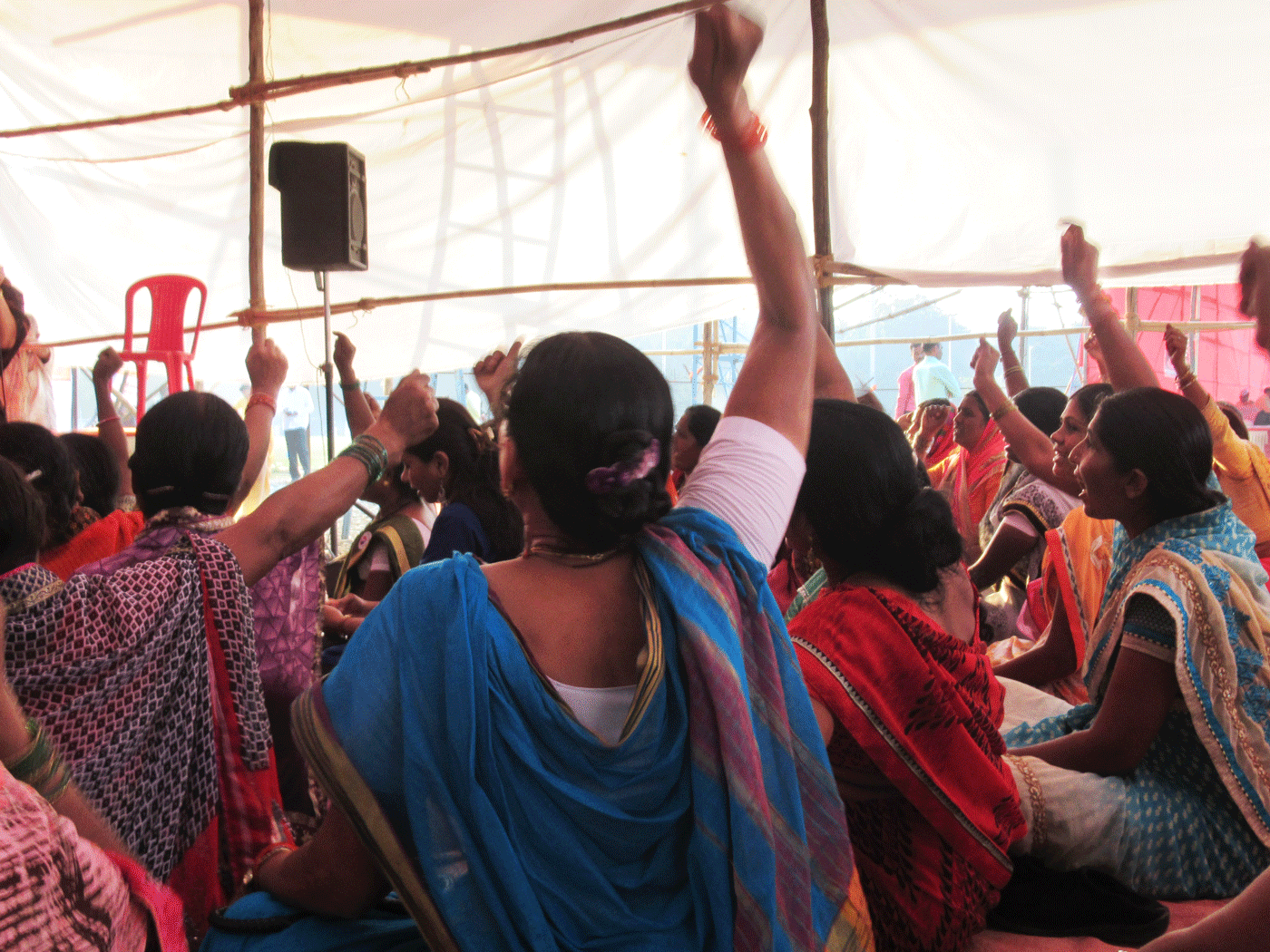 On November 21, 2018, around 80-100 women, most of them from Marathwada, a few from Vidarbha, gathered at Azad Maidan in south Mumbai to highlight their struggles as widows and as farmers, and emphasise their demands

Sangeeta’s husband Biru worked as a helper in an eatery in Tuljapur town, around 30 kilometres from Mardi, their village in Lohara taluka of Osmanabad district. He gave her Rs. 6,000-7,000 a month, she says, to run the house. But his own expenses – mainly on alcohol – exceeded his earnings. So he started borrowing small but ever-growing amounts from local shopkeepers, relatives, neighbours. Over time, says 33-year-old Sangeeta, who is from the Dhangar community, the debt ballooned to more than Rs. 2 lakhs.

“For the first decade of our marriage, things were going well,” she recalls. “But he had in him a growing anger because his elder brother would not give our share of the land.” Her father-in-law owned six acres, and had left two acres each to his three sons. Biru had filed a case in the court in Lohara, and it is slowly crawling through the judicial system.

And Biru’s anger grew because the couple had four daughters. He wanted a son – their fifth child. Their eldest daughter is now 16, the son is 8. “He had started beating me,” Sangeeta recalls. “If I asked him about the loans, he would say, ‘I have taken the money, it is I who will repay it’. So I would keep quiet.”

On March 30 last year, 34-year-old Biru climbed atop an aluminium can used to store flour, threw a rope on the iron beam below their tin roof, and hanged himself. It was around 11 in the morning. “Nobody was at home. He had locked the door. When my eldest daughter Rupali came home, she looked through a gap in the window and saw her father …”

The loan that Biru insisted he would repay – his belligerent responses to questions about it perhaps masking his own dread and anxiety – remains unpaid. And the full amount is now Sangeeta’s debt. “The lenders keep asking me… But these are no-interest loans from villagers, so that’s a relief. Otherwise, the amount would have kept rising.” 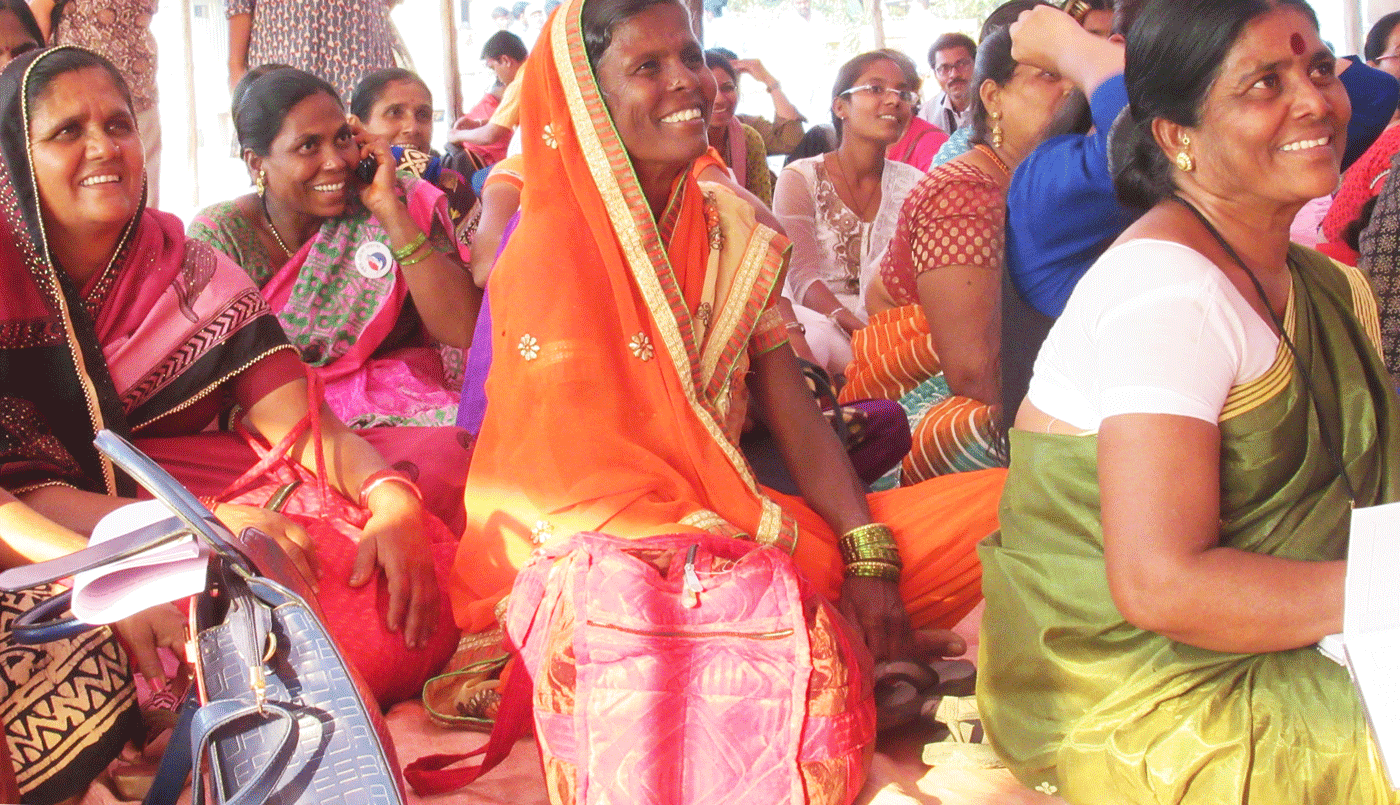 Across Maharashtra, the crushing impact of a man’s suicide in a farm household goes well beyond the shock and grief for his widow – invariably a farmer herself – as it has for Indubai and Sangeeta. A huge portion of the work in agriculture (sowing, transplantation, harvesting, threshing, crop transportation from field to home, food processing, dairying and more) is done by women. When widowed, the women have to continue doing their tasks as farmers and also take on the additional burden of their husband’s farm work. And then struggle for years with paperwork, health problems, their children’s education – and on many other fronts.

This struggle occurs in tens of thousands of households. From 1995 to 2015, National Crime Records Bureau data shows, around 65,000 farmers – 90 per cent of them male – have committed suicide in Maharashtra, a large number of them in the Marathwada and Vidarbha regions. And these numbers would exclude possibly countless more suicides like Biru’s, a non-cultivator in a farming household.

This week, on November 21, around 80-100 women, most of them from Marathwada, a few from Vidarbha, gathered at Azad Maidan in south Mumbai in what they called a ‘Shokhsabha’, a mourning, to highlight their struggles as widows and as farmers, and emphasise their demands. They were brought together here by the Mahila Kisan Adhikaar Manch (MAKAAM), a network working on issues faced by women farmers across India.

“Our organisation was formed mainly to recognise women as farmers,” said Seema Kulkarni of the Manch, at a press conference that afternoon.” And to focus on the impact of a suicide by a male farmer on his wife and children. “How is she living after that? How are her children managing? There has so far been little discussion or visibility about this.” 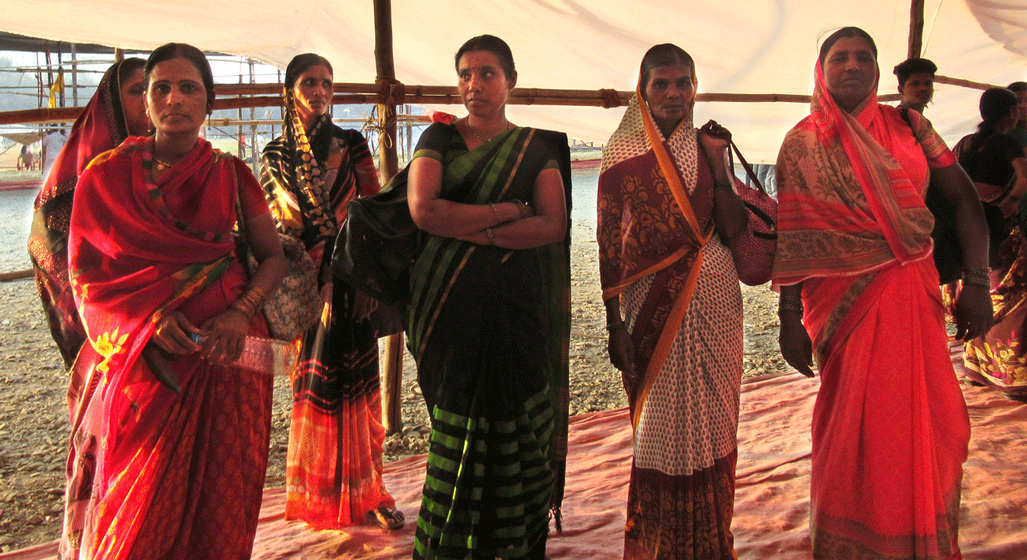 By evening, the women gathered their bags and prepared to take the train or bus back to their village, to their land and lives as widows and farmers

In September-October 2018, MAKAAM and around 20 affiliate organisations did a survey of 505 women from 11 districts of Marathwada and Vidarbha. This is some of what they found:

Only 34 per cent of the women had got their pension approved; 29 per cent were unable to get the land title transferred in their name, while 11 per cent didn’t know the status of this transfer; and 43 per cent could not get the house deed transferred. Women had independent ration cards in only around 50 per cent of the households surveyed. And just 12-24 per cent of 355 children managed to get concessions in school fees or material help in the form of books and uniforms.

Many of the women who MAKAAM and the Maharashtra State Women’s Commission spoke to in meetings in Nagpur and Aurangabad in February and March 2018,  felt the Rs. 1 lakh compensation after the suicide is inadequate. In 2015, the Andhra Pradesh government increased the amount to Rs. 350,000. And many women were forced to use large chunks of the Rs. 30,000 cash component as bribes.

A report on these meetings, titled Key concerns of women farmers from suicide affected households of Maharashtra , notes: “Many women from suicide affected households said that their names are not on the list for loan waivers [announced by the government]. With old loans still against the family’s name, women are unable to take new loans from banks… They are thus turning to microfinance or informal lenders that offer loans at high interest rates, making them more vulnerable.” 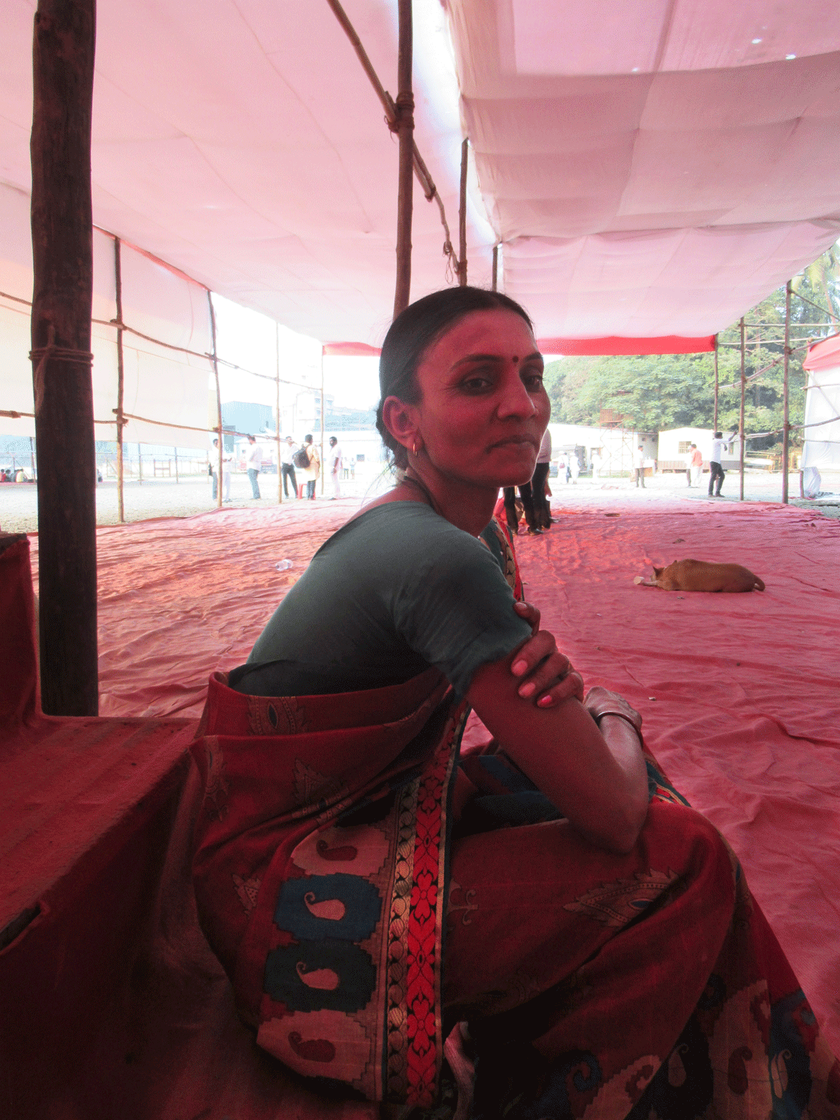 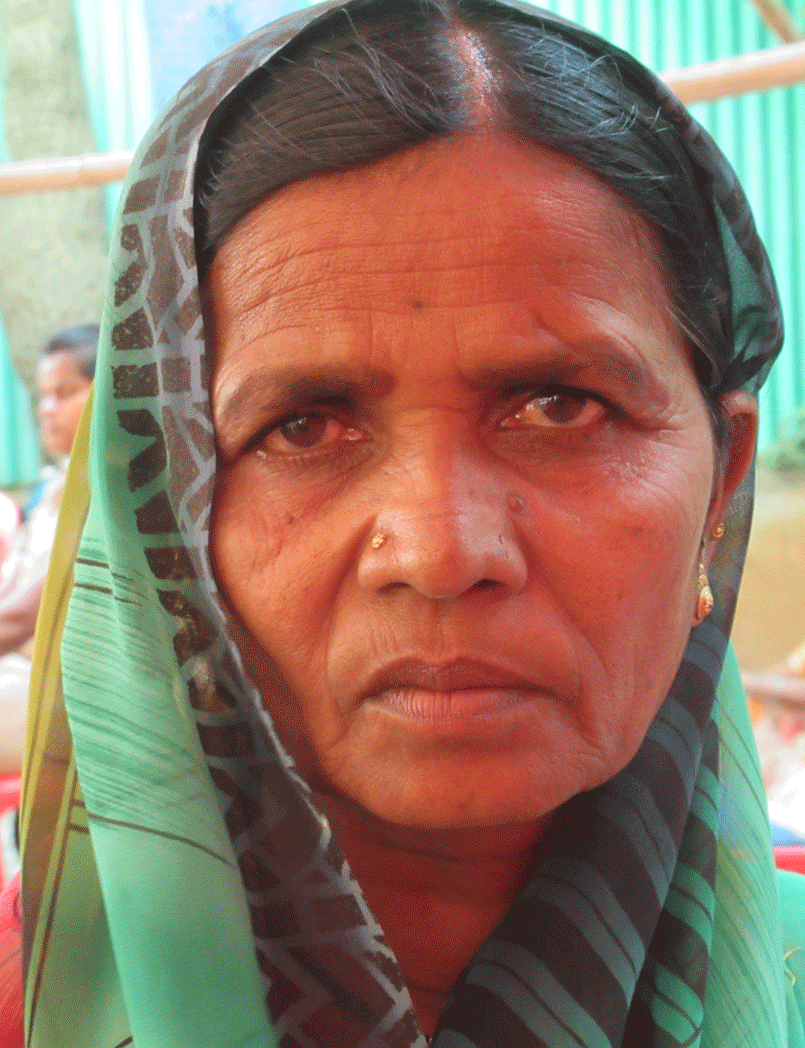 Manda Aloney (left) from Sorta village in Wardha district speaks of her resolve to face harassment; Indubai (right) though seems to be nearly defeated by her years as a farm widow and penurious farmer

The women also face an acute lack of employment options, a lack of access to healthcare, and even eviction. The report speaks of sexual harassment faced by the farm widows, often when trying to get hold of schemes or compensation. And it mentions violence within the home.

This can occur before as well as after the suicide. While Sangeeta, like some of the other women present at Azad Maidan, brushes off the occasional beating she got from her husband, the women speak with disdain and distress of the sexual harassment they experience as widows. “I have had to face barbs about how I will live alone,” Sangeeta says. “A few times men have asked me to be ‘friends’ with them. I tell everyone that I want to live with dignity and self-respect.”

“It’s not just the men who look at us with bad intentions, even young boys do that,” says 38-year-old Manda Aloney, from Sorta village in Arvi taluka of Wardha district. Manda’s husband had developed a limp after a tractor accident that heaped Rs. 3 lakhs in hospital bills on the family. Drinking, worried, depressed that his limp did not allow him to work much, he jumped into the Wardha river on Holi day in 2013.

Manda now cultivates cotton and tur on their three-acre farmland, and also works as an agricultural labourer for Rs. 100-150 a day. She is involved in a local farmers’ organisation, which takes her to meetings and events. “Some people wonder where I am going. They say I must be roaming around with other men,” she says. “I have got used to it. If I have to live alone and bring up my two children [her daughter is 16, her son is 15], I will have to face this and overcome it.”

Indubai though seems to be nearly defeated by her years as a farm widow and penurious farmer. “I have got no pension, no water [in the well dug by my husband], no work. Nothing. How do we live? How do we look after our health? How can we manage,” she asks. Over the years, Indubai has been to various farmers’ meetings and rallies. Every time, with hope. “I’ve gone to Nagpur, to Aurangabad, to Kalamb and other places,” she says. “But nothing happens. Where do I go now? Who do I ask?”