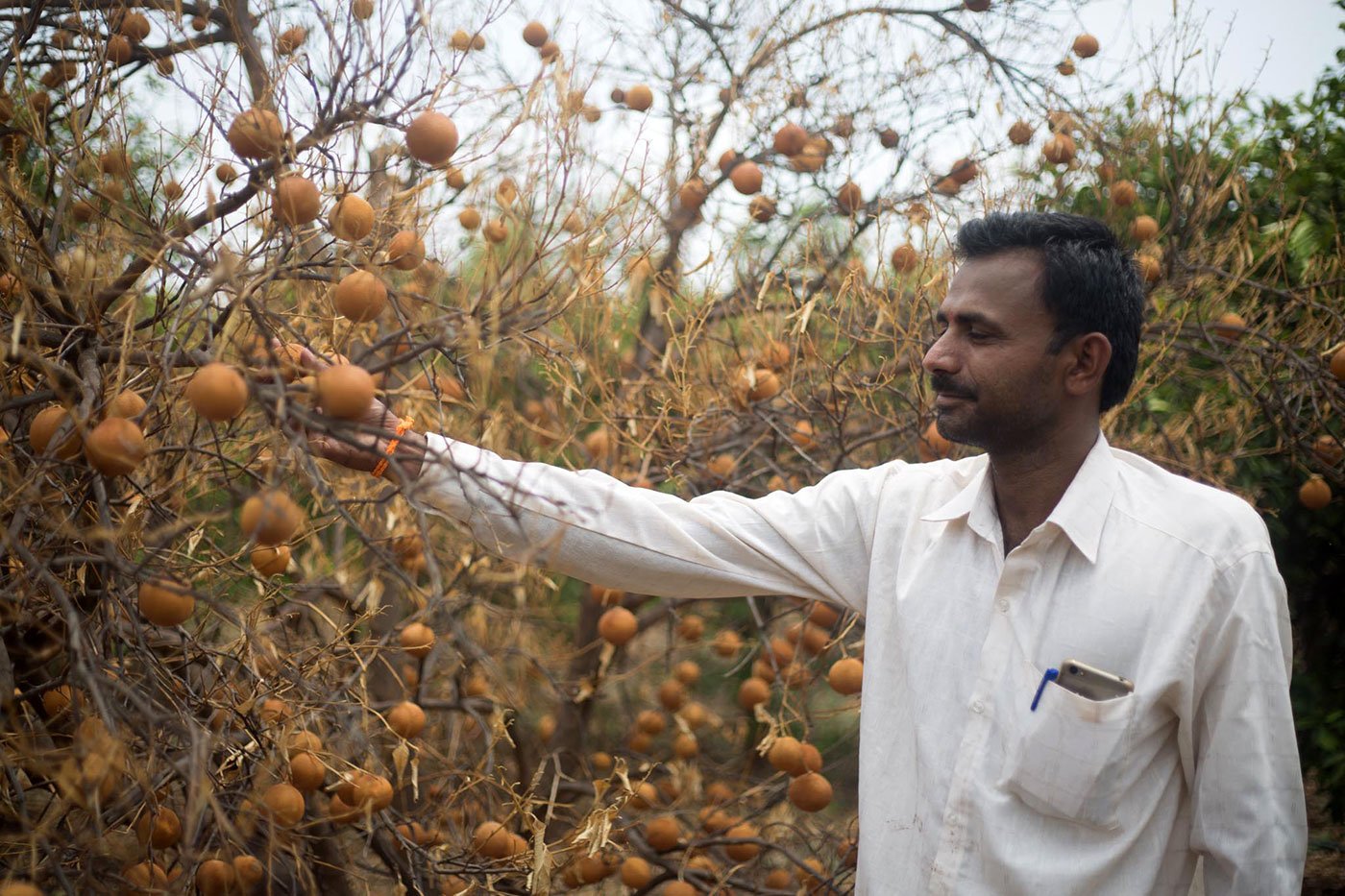 Marathwada’s mosambi are all squeezed out

Years of drought have dried up the water-intensive mosambi orchards of Marathwada, a major supplier of the fruit across India. Farmers deep in debt have uprooted their trees to prepare the land for other crops

Shivaji Thomre has 13 acres of farmland. Meandering across his ploughed fields being readied for cotton, jowar and corn, we come upon a patch of dried  trees under which round yellow fruits – akin to sucked-up lemons – lie scattered. “This is mosambi (sweet lime),” says Shivaji, picking one up. “It  needs 60 litres of water per plant per day in ideal conditions. The mosambi have totally dried up.”

Thomre has 400 mosambi trees on two acres –  that means 24,000 litres of water per day in summer, good rains in the monsoon, and nearly as many litres in the winter. Other fruit trees require much less –pomegranate, for example, requires around 20 liters per day per tree in summer.

Thomre's father had planted the trees in 2002 in Karajgaon, their  village of around 1300 people on the outskirts of Aurangabad city in Marathwada. Shivaji was only 20 at the time. “Water was not an issue back then,” he recalls. Rainfall was relatively reliable, and he family’s private well had enough water. “Planting mosambi was a wise and lucrative option.”

Mosambi orchards are spread across every village in the 60-kilometre belt that begins from the Aurangabad highway and leads to Jalna. All of them were planted in the early-2000s, and all of the orchard owners are struggling today.

The fruit is not easy to cultivate. The trees must be nurtured for four to five years before they bear mosambi , but after that, a bi-annual yield is assured for 25-30 years. Shivaji’s orchard, however, bore fruit for only four years, from 2006 to 2010.

From 2012 onwards, Marathwada witnessed four consecutive years of drought and a water shortage. “Forget the harvest, because of the paucity of water, even the plants have barely survived,” says Shivaji. “Even the relatively good monsoon of 2016 did not help. In this area, the rainfall wasn’t that great.”

In a good year, Shivaji says he would get around 15-20 tonnes of mosambi . “At an average of Rs. 30,000  per tonne [sale price]  I lost around Rs. 3.5 to 4 lakhs this season,” he says, sitting under a barren mosambi tree. “That is not counting the one lakh I invested in the orchard through the year. The last five years have been devastating for this fruit.”

The prolonged rough phase has compelled Shivaji’s wife Jyoti to work as an agriculture labourer on other farms. “I work at a daily wage of 150 rupees,” she says. “It adds to the family’s income. You never know when you will need extra money. Our seven-year-old niece has been hospitalised in Aurangabad for the past two days. She has to be operated for a cyst. We have already spent Rs. 15,000.”

Living in a joint family of 18, Shivaji would not have been able to pull through on agriculture alone. The family runs an electronics shop in the village, and Shivaji himself works as a business correspondent in Bank of Maharashtra’s Karmad branch, earning Rs. 7,000  a month. “We have a loan of Rs. 8 lakhs [from the bank, accumulated  over five years],” he says. “We have to think of alternatives to mosambi .”

And so Shivaji plans to phase out the orchard. The trees his father planted 15 years ago will be uprooted. The process has already begun. “Of our 400 trees, 50 were removed this season [in the summer of 2017],” he says. “I hired a JCB machine. I will gradually get rid of all of them. There is no point in sticking to a financially uncertain and water-intensive crop.”

PHOTO • Parth M.N.
Dried up mosambi on the trees

Aurangabad, Jalna and Nanded districts are among the foremost suppliers of mosambi to the rest of the country

Scorching heat is also harmful for mosambi . The 2017 heat wave in Marathwada – when temperatures were  consistently 45 degree Celsius at the end of April and in May – has seared the fruit. “It has resulted in premature fruit drops,” says Shivaji. “The extensive heat weakens the tissue.”

Aurangabad, Jalna and Nanded districts in Marathwada are major cultivators of mosambi and among the foremost suppliers of the fruit to the rest of the country. Now, however, mosambi in Marathwada may be on the path to extinction. Several farmers are opting instead to grow other fruit like pomegranate, which demand less water; and some are returning to traditional kharif crops like tur and cotton.

As much as 30 per cent of the plantations were uprooted  in 2013 alone, when over 1.5 lakh acres of mosambi plantation across Marathwada had been affected, with many farmers reportedly keeping their plants alive with sewage water. The better-off farmers spent a fortune on water tankers.

Watch video: Bhausaheb Bhere of Gadhe Jalgaon village speaks of his struggle to maintain the orchard

In April 2017,  Bhausaheb Bhere, 34, from Gadhe Jalgaon village, two kilometres from Karajgaon, spent Rs. 50,000  on water to help his mosambi plants survive the summer. “The fruit had dried up,” he says, walking through his 2.5-acre orchard adjacent to his 2.5 acres for cotton and jowar . “I had to try and save the trees somehow. Still, 20 trees died.”

Bhere, too, has had the orchard since 2000. The last five years, he says, have been nightmarish. “I have run up a debt of Rs.4 lakhs,” he says. “My daughter got married three months ago. The situation gets grim when you need money for a wedding and are banking on mosambi . I have now sunk a farm pond and am hoping it will help.”

Bhausaheb Bhere: 'The situation gets grim when you need money for a wedding and are banking on mosambi '

The state government is offering subsidies to farmers to across Maharashtra to build farm ponds for water conservation. The water intensive nature of the mosambi plant has compelled many farmers to opt for the subsidy. However, according to statistics obtained from the divisional commissioner’s office in Aurangabad, only 13,613 farm ponds were completed in the eight districts of  Marathwada in 2016-17, against the administration's plan to build 39,600 ponds. And of the 13,613 farmers who have built ponds, 4,429 have not yet received their subsidy.

Nonetheless, a farm pond is Bhere’s last throw of the dice, and he has spent Rs.2 lakhs on it. He hopes a decent monsoon will fill up the pond, making it easier for him to maintain the mosambi orchard. “This is it,” he says. “If the experiment fails, the orchard will not see 2018.”