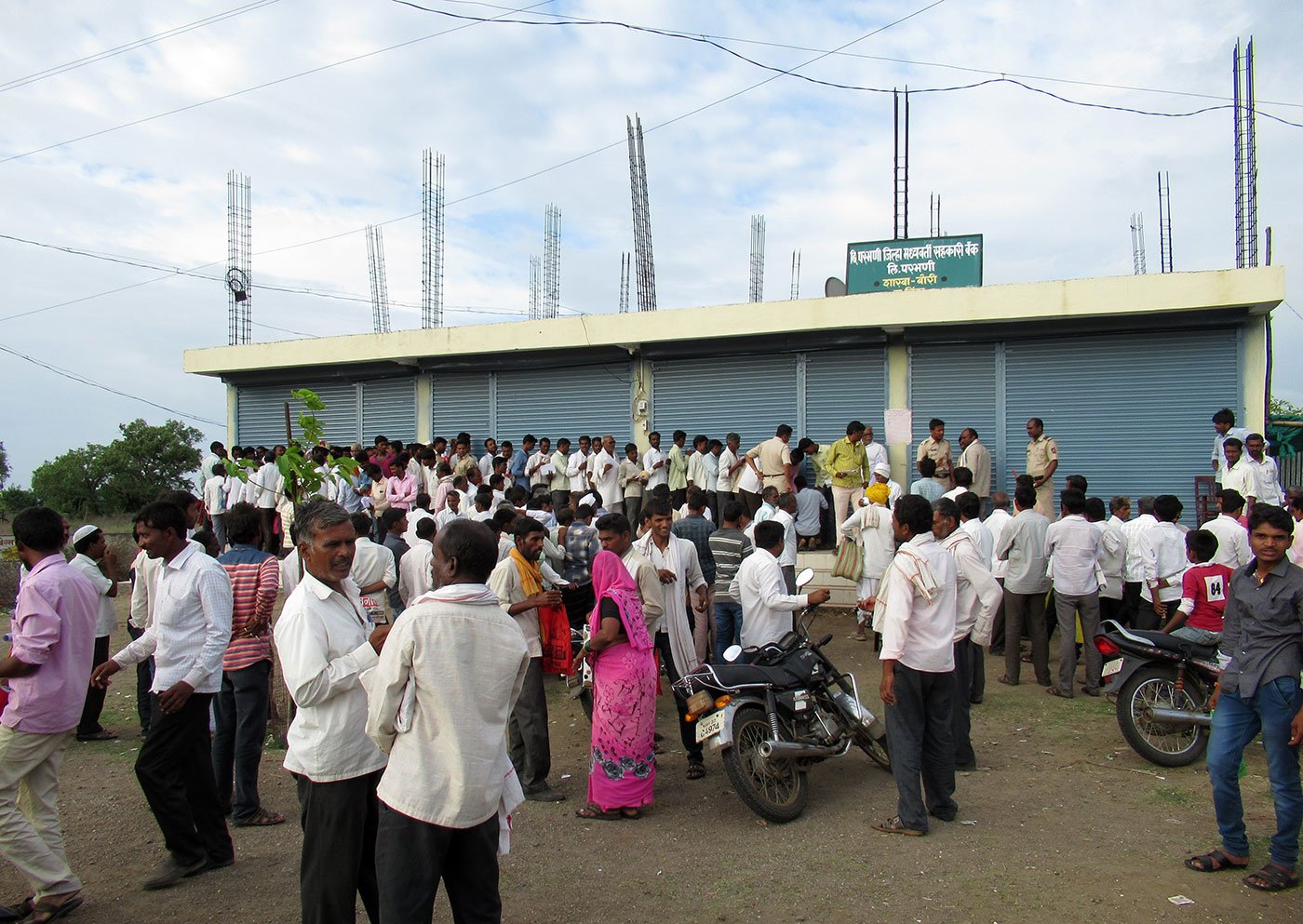 Crying all the way back from the bank

The annual payment of crop insurance premiums was thrown into chaos this year by the state's directive to move the process online. Banks in Marathwada were ill-equipped to handle the online load – compounded by confusing extensions till August 5 – leading to long lines and extreme anxiety among farmers

Anil Khapre has been trying to get into the Bori branch of Parbhani’s District Cooperative Bank (PDCB) for the past three days. “I got a token today,” he says, helplessly. “I will have to come again tomorrow and spend the day here.”

Khapre, 28, lives in Ridaj village, about eight kilometres away. The bank has distributed around 150 tokens to farmers waiting outside. Many have gone back without a token. The others may not get their turn inside the bank after standing for hours in the heat – there is hardly any rain here this year – even with a token.

“I cannot afford to spend days standing in front of the bank while leaving my farm behind,” says an agitated Khapre, who cultivates soyabean and cotton on his three acres. “It took me three days to gather the required documents that mention land holding, crops we sow, and so on. The village accountant who issues these documents is busy with too many farmers approaching him. Plus, it takes 40 rupees to go [by autorickshaw] to the bank and we also spend on lunch and tea.”

Watch video: Anil Khapre of Ridaj village got a token after days of waiting, but is not sure when he can enter the bank

The bank’s staff is swamped too, as farmers come in, one after another, to furnish the documents and pay their crop insurance premium for the kharif season. It takes the staffers around 15 minutes to scrutinise each set of documents, feed the information online and upload one form. With two counters and 4-5 forms uploaded in an hour, the bank can, at most, complete 75-80 forms in a day. And over 400 farmers are waiting outside.

But Khapre cannot afford to lose his temper. The atmosphere is tense. A police van is parked in front of the bank, and a few policemen with lathis are ensuring there is no disorder in the queue. On July 27, the day before Khapre got his token, 24 farmers were charged – seven were arrested – for pelting stones at the bank.

“Agitated farmers got into a fight with bank officials,” says inspector Sunil Giri. “They did a rasta-roko for two hours in the afternoon [right across the bank branch]. The police tried to pacify things. But when they threw stones, we had to lathi charge. Three police officers got injured and a bus lost its windshield.”

This was a few days before the deadline of July 31, and panic was setting in among the farmers. “You know how unpredictable the rainfall has become,” says Khapre, who has a bank loan of Rs. 1 lakh. “Even this year, half of my crop has dried up due to a lack of rain. Crop insurance minimises the losses. But the bank officials were being arrogant and insensitive, which led to friction.”

'It took me three days to gather the required documents that mention land holding, crops we sow, and so on', Khapre says, and then days in line at the bank in Parbhani

Paying the premium for crop insurance is an annual process. Under the Pradhan Mantri Fasal Bima Yojana, farmers pay the money to insurance companies and the state acts as a bridge. The insurance protects farmers from crop losses caused by extreme weather conditions.

This year too, like every year, the process began around mid-July. But with a big difference: the state government has made it mandatory for the forms to be filled online. Official notices about this started appearing only in the first week of July.

This left farmers with the option of filling up forms at banks with online facilities or visiting local email service centres. These centres, usually run by private contractors, are like cyber cafes, where farmers can upload the forms directly. But because of recurring connectivity issues, the centres are barely used.

“The servers cannot take the traffic,” says Rajesh Sarode, manager of the Bori branch of the PDCB. “And the bank staff is not trained enough to swiftly upload forms. If we accept them offline like we used to until 2016, we now run the risk of not being able to upload all of them before July 31. That will land us in trouble.”

By the time I get to Beed district, the July 31 deadline is three days away. The panic levels have intensified. Perhaps realising that the load is unbearable, the state has issued a notification to the banks allowing them to accept offline forms too. It has asked the District Cooperative Banks – where most farmers have accounts – to share the burden. But many branches of these banks don’t have scanners and printers and could not accept the forms. This increased the pressure on the other banks.

Like in other parts of Marathwada, there was quiet desperation and long lines at the Parli branch of the Beed District Cooperative Bank

Outside the Talkhed branch of the Beed District Cooperative Bank (BDCB), farmers are sitting all along the narrow street. Ganesh Mhaske, the bank manager, says they received 3,000 applications last year. “I am able to do 250-300 [offline] in a day,” he says without looking at me. “But I do not think I will be able to accept even half of what I did last year [so close to the deadline].”

Meanwhile, the desperation of farmers and the chaos and crowds at the banks have been growing every day. At the Parli branch of the BDCB, when Umesh Satpute, 23, arrived at 5.30 a.m. to be ahead in the queue, 250 people were already there. “I have been trying to pay the premium for five days,” he says. “I tried at email service centres, but that did not work. Then I arrived here yesterday to see a huge crowd. So I came at 5:30 today, but people were waiting, sleeping on the pavement.”

Watch video: Umesh Satpute, a farmer from Parli village, has been trying to pay the insurance premium for five days

One of them is 65-year old Sambhaji Satpute. “ Achche din aane wale hai ,” he shouts out, and shows me an empty bag. “I had brought two bhakris and sabzi. I finished them last evening. Have not eaten much since.”

Sambhaji’s village, Selu, is 15 kilometres from the bank. “I have been here for two days,” he says. Sambhaji’s white kurta is muddied at the back from sleeping on the street, his eyes are fatigued “I have not had a bath. An autorickshaw or bus will cost 20 rupees one-way. So I thought I would sleep here instead.”

People are trying to cut the queue to get in front, hurling abuses at each other. The police are trying to maintain order by brandishing their sticks. “We were made to wait to collect our crop insurance [earlier this year],” says Sambhaji, who grows soyabean and cotton on his 4.5 acres. “Now we have to endure this to pay our own premium. What the hell is going on? When are we supposed to work?”

By the time the sun sets on July 31, many farmers have not been able to complete their paperwork. They are facing the prospect of letting their crops remain unprotected by any insurance. The day had begun with the hope, but is ending with despair.

Watch video: Sambhaji Satpute of Selu village, who has not eaten much and spent the night sleeping on the street, waiting to pay his premium

But August 1, when I reach Latur, starts on a positive note. The state has extended the deadline to August 4, and farmers have a few more days to try their luck in the long queues.

At the State Bank of India branch in Jalkot in Latur, Nagesh Kendre, 40, walks out of the bank thanking his stars. His 10 acres of land is divided between five – three brothers and their parents. The bank was insisting on each family member submitting a form individually. “My brother is studying in Loha, 50 kilometres from here,” he says. “They make us wait in queues for days. How can he leave his studies to pay crop insurance premium? And why should each family member submit the form? If the documents are accurate, why can’t I do it on their behalf? Who will look after the farm if everyone starts standing here? Finally the bank accepted it today after I fought with them. If the deadline had not been extended, I would be in trouble.”

The relief, however, does not last long. At 11 a.m. on August 2, the banks receive yet another official mail asking them not to accept offline forms – the August 4 deadline remains though for online uploads. I phone Ganesh Mhaske at the Talkhed branch in Beed about these flip-flops. “About 100 farmers had gathered in front of the bank this morning,” he says. “I managed to accept 1,600 forms. I told farmers I cannot do anything now. They protested, then surged towards the email service centre.”

The email service centre in Talkhed is a few meters from the bank. At best, about 6-8 people can squeeze in. It is run by a young man, Santosh Gaikwad. On July 30, he had told me that the website ( http://agri-insurance.gov.in ) is unable to take the traffic. “Downloading, scanning, uploading, making online payments – it takes a lot of time,” he said. “And if the server breaks down in the middle, you have to start over.” In a week, after operating the centre through the day and even nights, he had managed to upload the forms of only 30 farmers. More than a 100 were waiting, hoping and desperate.

Postscript: By July 31, only 39 lakh forms had been accepted, state agriculture minister Pandurang Fundkar told this reporter. In 2016, 1.09 crore farmers had applied for crop insurance, the state government said in March, while making Aadhar mandatory to be able to access the scheme. Though the government has not yet compiled the final figure for 2017, it is unlikely that the number of crop insurance applications will match last year’s, considering the volume of applications and the extension of the deadline by a mere four days to August 4.

Fundkar, however, says the numbers must be read differently: "Until the previous year, we accepted crop insurance based on the number of crops. So if a farmer cultivated four crops, he filled up four forms. This time, it is one farmer one form, which is why the number has reduced. We only accepted offline forms on August 5 and we received 127,000 forms on that day. From August 1 to August 4, we received online forms only. We are expecting the final tally to be around 70 lakhs."