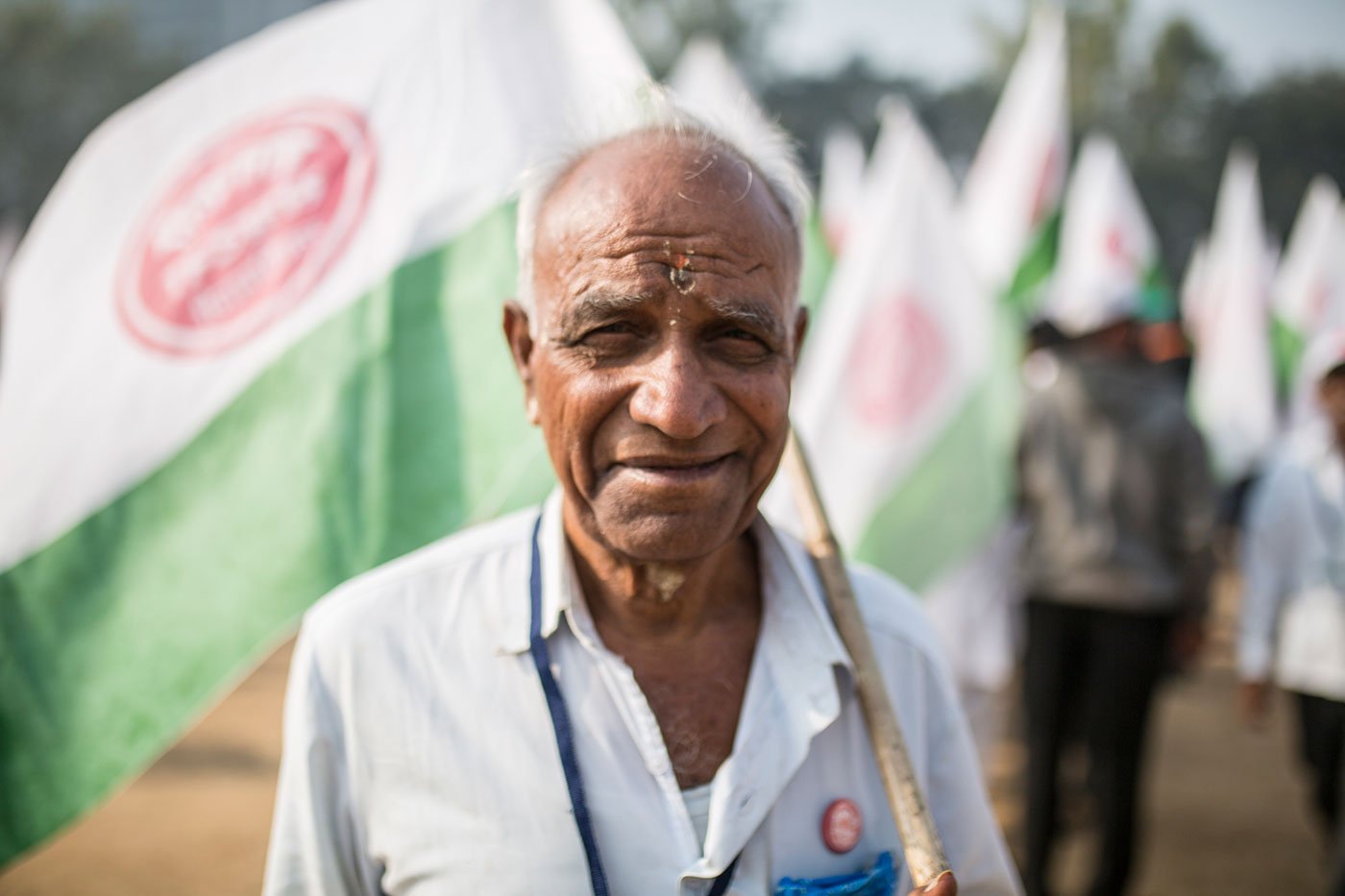 Taking back hope from the march

After gruelling journeys that stretched for days for many, the farmers marched to Sansad Marg on November 30, shouting slogans, singing, speaking of their demands. Then they got ready to return to their fields

They came. They marched. They shouted slogans. Almost at the doorstep of the country’s Parliament. They compelled the political leadership to address them. And eventually, they left. With their heads held high.

But it was not easy. When Tara Devi woke up on the chilly morning of November 30, her bones crackled. “My body had stiffened up from sleeping on the ground [at Ramlila Maidan] under the open sky,” she says. Before that night, Tara Devi had already spent more than 14 hours on a train from Varanasi. “My sweaters are torn. I do not have a thick blanket either,” she says. After khichdi for breakfast at 8 a.m., served by volunteers, she proceeds to the busiest stall at Ramlila Maidan – the doctor's, where a team of volunteer doctors is attending to anyone who comes in with a complaint.

Of the tens of thousands of farmers staying at the maidan , located in Central Delhi, many have visited the doctors asking for medicines. On the night of November 28, when there were no lights in the tents, some farmers parked two motorbikes at the medical stall and left the headlights on. “Most of them have complained of cough, cold and pain,” says Dr. K.K. Mittal, without taking his eyes off the farmers describing what they have been enduring. “They have come from their farms to the polluted air in Delhi.” 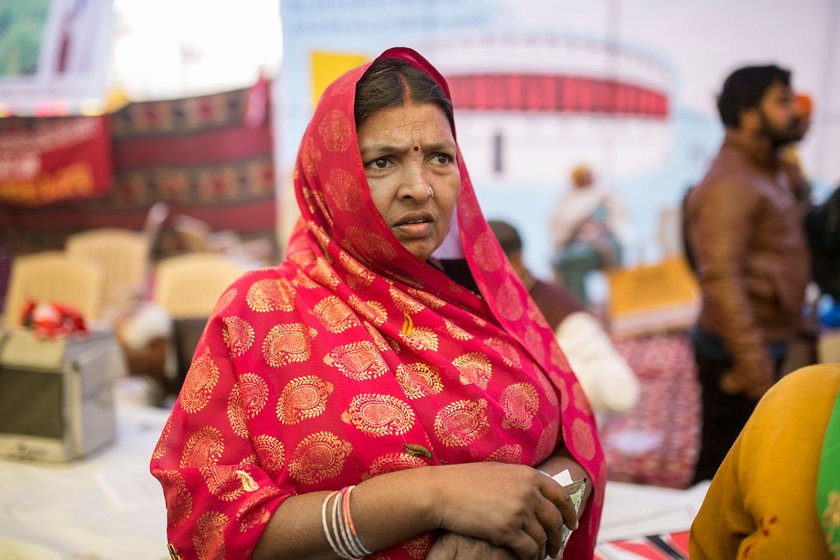 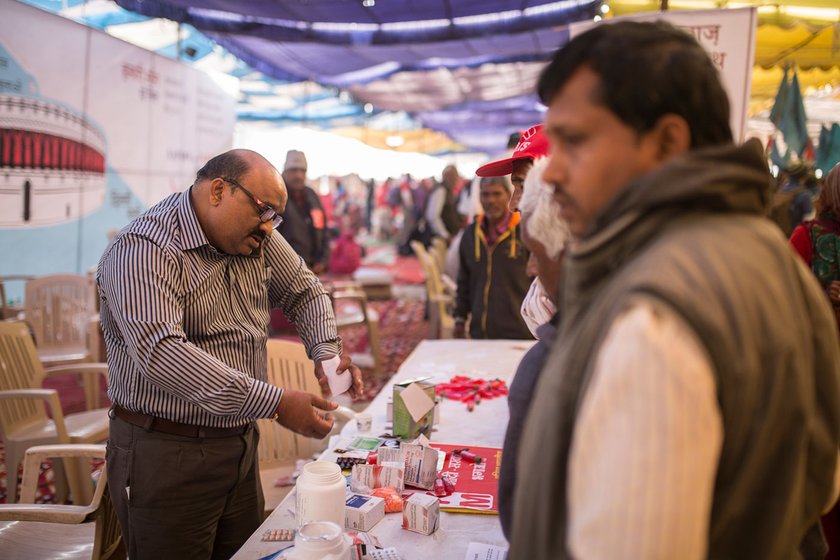 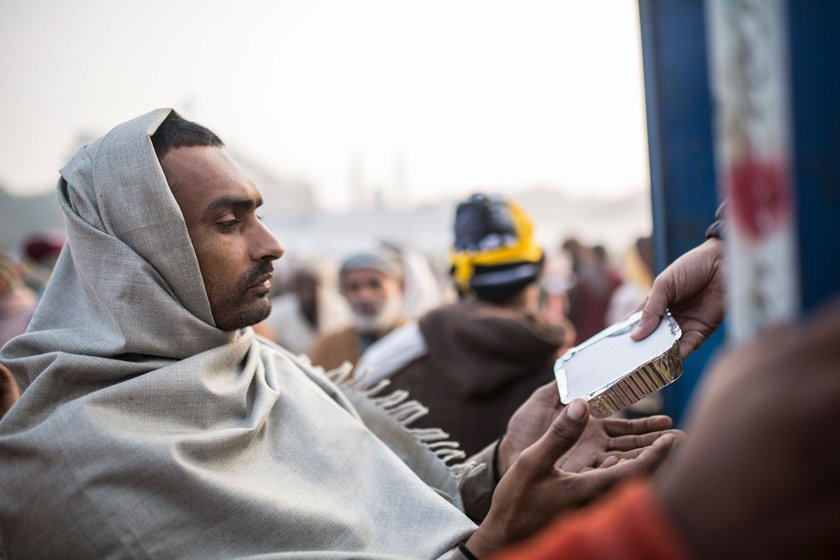 Tara Devi (left) had to visit the doctor's stall at Ramlila Maidan, seeking help from Dr. Mittal, after eating breakfast distributed by volunteers

Tara Devi says her hands and legs hurt, her stomach aches and she feels nauseous too. Dr. Mittal sifts through his medicines and hands her a packet. “I need to be fit for the rest of the day,” she says.

Meanwhile, more farmers pour into Ramlila Maidan, some beating drums, singing songs and performing folk dances. The count is now 50,000, say the organisers, and the atmosphere is electrifying.

The All India Kisan Sangharsh Coordination Committee, an umbrella group of 150-200 farm unions, has mobilised farmers from across the country to march towards Parliament, demanding a special 21-day session focussing on the country’s agrarian crisis. The crisis has driven more than 300,000 farmers to suicide across India between 1995 and 2015.

Farmers from over a 100 districts in India are here, in diverse colours. Farmers from Maharashtra wear red t-shirts, those from Uttar Pradesh have yellow flags, groups travelling from Madhya Pradesh are in violet t-shirts, while Tamil Nadu’s colour is green. Ramlila Maidan has become a rainbow of hope. 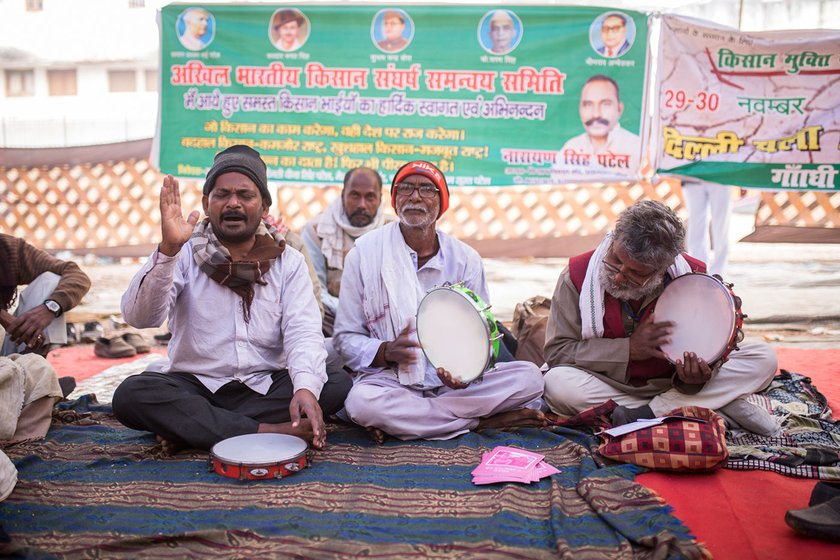 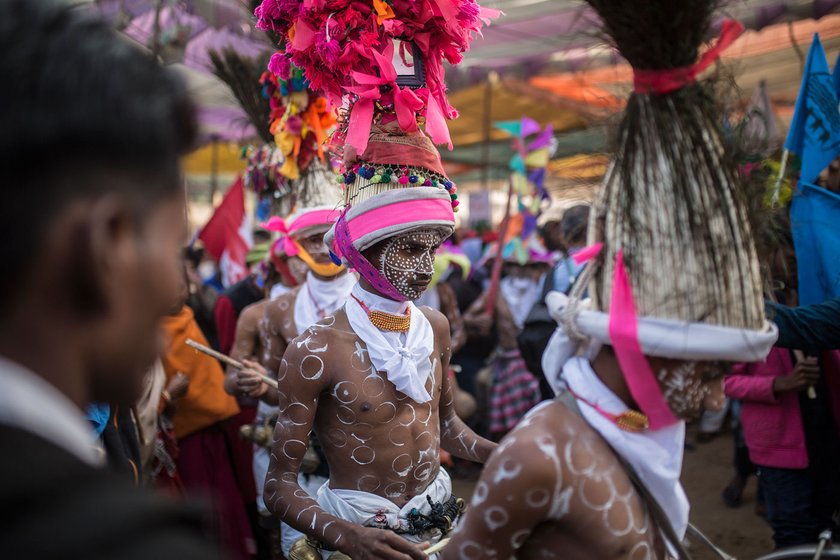 While enforcement of the recommendations of the National Commission on Farmers and loan waivers are among their prominent demands, the priorities and problems of farmers differ from region to region.

A group of farmers from western Maharashtra also complain of the lack of irrigation facilities, water scarcity, and an unfair crop insurance policy. Adivasi farmers from the state demand the enforcement of the Forest Rights Act, 2006, which gives them rights over land they have long cultivated.

For farmers who had come from Punjab, the minimum support price (MSP) for paddy and wheat is a priority. Jiltar Singh, from the outskirts of Patiala city, says the investment costs have risen with increasing diesel prices, along with the prices of fertilisers and pesticides, but the prices of crops have not gone up in the same proportion. “Has the farmer's standard of living kept pace with that of the rest of the country in 20 years?” he asks, as the marchers move out into the streets of Delhi at around 10 a.m., surging towards Sansad Marg (Parliament Street), four kilometres from Ramlila Maidan. “The Modi government promised a loan waiver, but that has not happened. Even the Congress in Punjab is not enforcing it.” 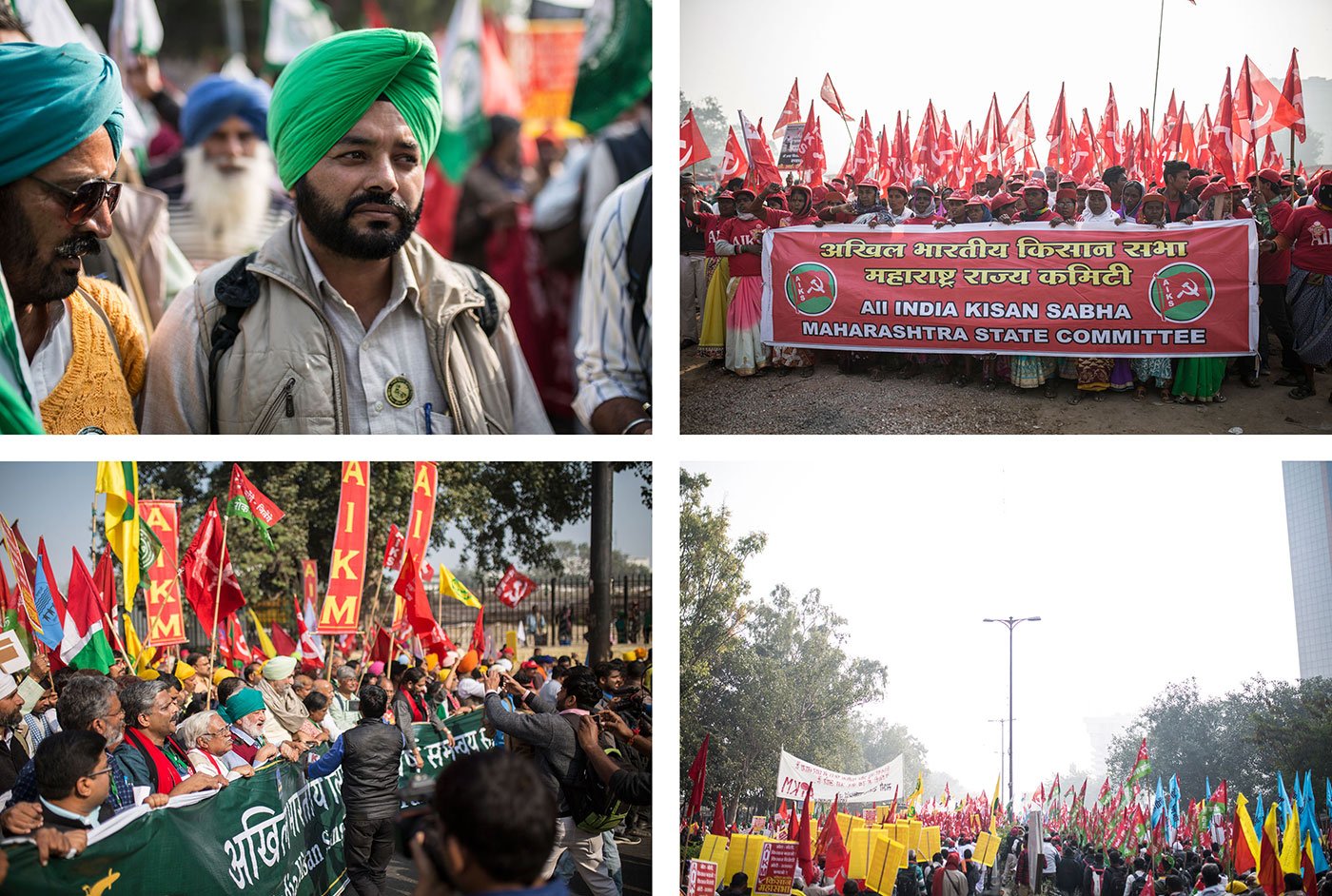 The raised flags and banners now occupy one side of the road, carried by protesters striding amid barricades and security personnel. Some women farmers have carried photographs of their husbands who committed suicide. The chants and slogans continue, robust and repeated. By 12 p.m., the farmers reach Sansad Marg, where the stage is set for farm leaders to address the gathering.

Some of the farmers sit on thin rugs, others spread papers on the ground to sit; they fill up the street from end to end. Those who have arrived in the morning have carried bhakri and chutney wrapped in newspapers. Many of the others who have been in Delhi for more than a day disperse in the area to eat something from street food stalls.

The speeches continue till 4:30 in the afternoon. Several reputed farm leaders across the country address the gathering. As the afternoon progresses, the stage steadily fills up with representatives of several opposition parties. Notably, Congress president Rahul Gandhi, Delhi chief minister Arvind Kejriwal, the National Conference’s Farooq Abdullah, Samajwadi Party’s Sharad Yadav, and Nationalist Congress Party president Sharad Pawar. All of them target the present government for its neglect of the agrarian crisis, and pledge support to farmers from an open platform. 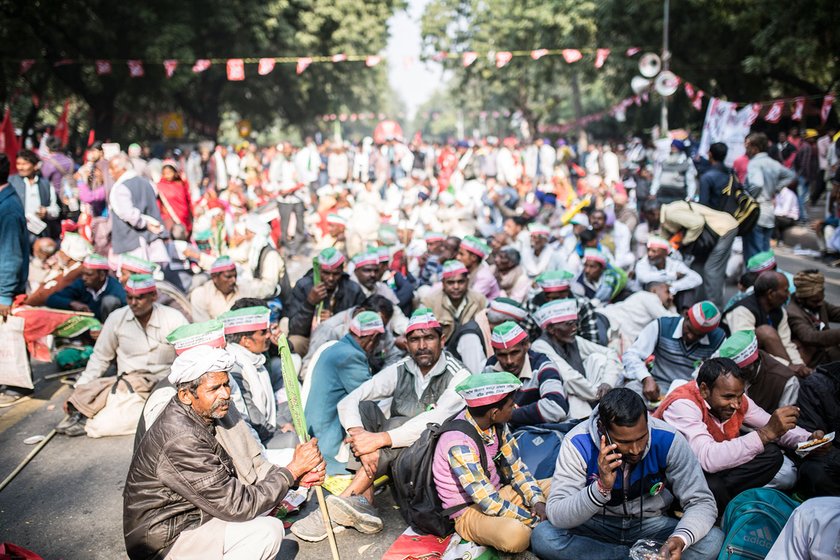 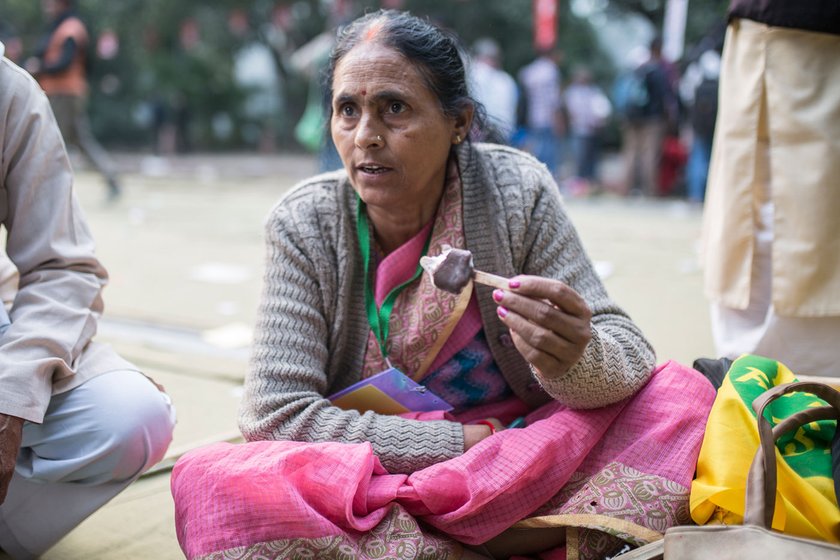 At Sansad Marg: the farmers think it has been entirely worthwhile to make that effort to reach Delhi. Kaushalya Devi of Bihar enjoys a chocolate ice-cream after the march

Some farmers listen intently, others use the afternoon to relax after the arduous three days. By evening, the activities start winding down. The farmers pick up cloth bags or backpacks containing their belongings, ready to start another taxing journey back home to various parts of the country.

“Is this it? What next?” Some of the reporters at the rally ask. But the farmers think it has been entirely worthwhile to make that effort to reach Delhi. Kaushalya Devi, the sarpanch of Nauwa village in Bihar, takes back hope from the march: “The political leaders supported us, the reporters covered our rally, and so many farmers turned up,” she says, enjoying a chocolate ice-cream after the march. “It is reassuring to know that you are not the only one suffering, and there are thousands of others who share your problems.”