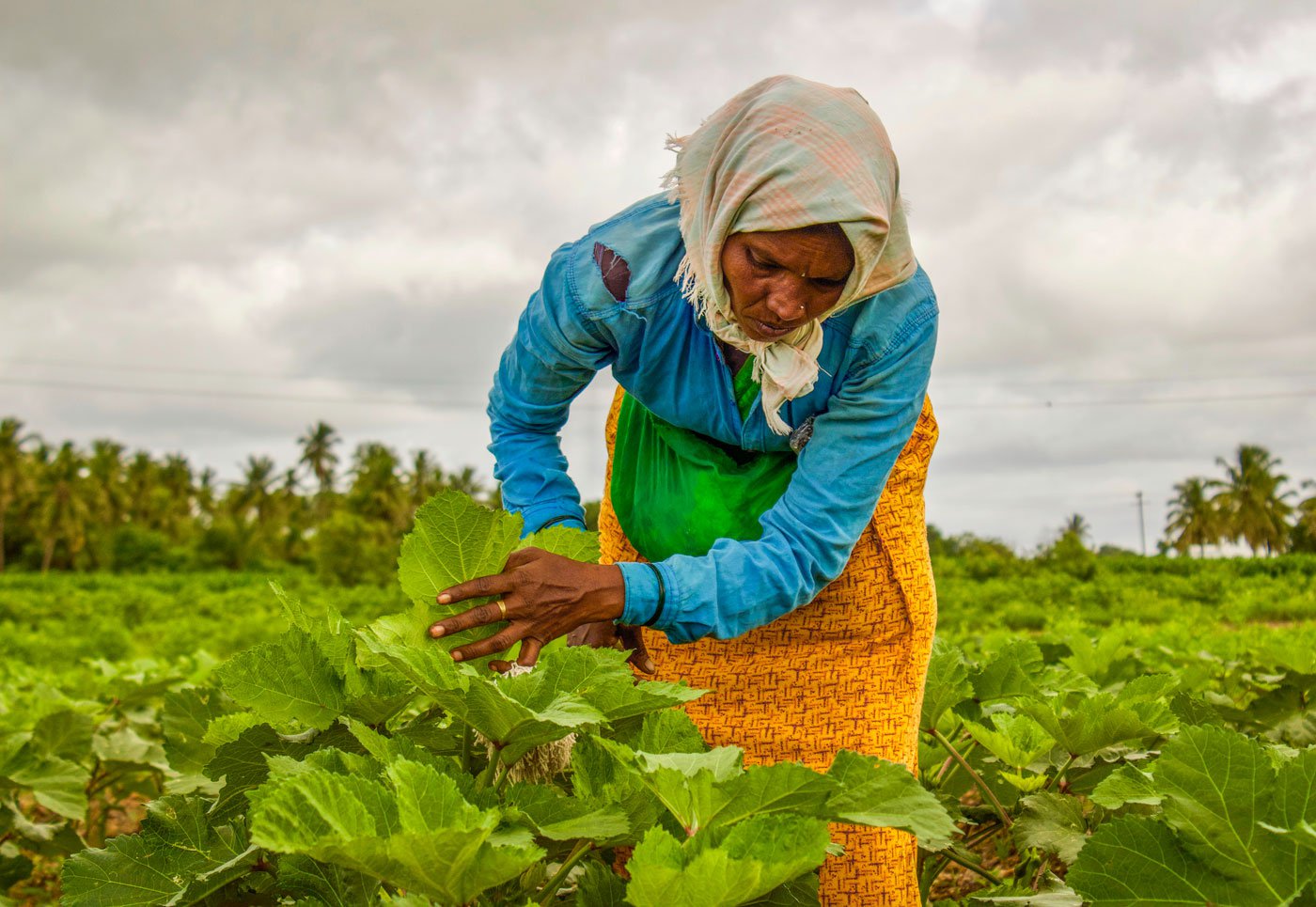 In Haveri, Ratnavva's life of hopes and seeds

Caught in a cycle of debt and poverty, Ratnavva Harijan, an expert hand-pollinator in Karnataka's Haveri district, is doing everything she can to educate her children – including taking on casteist customs

“It has been this way since I was born; I’ve worked as a labourer,” says Ratnavva S. Harijan, on a misty morning in August, as she briskly walks from her house towards the farm where she works for daily wages. Willowy and slightly stooped, she paces with a speed that conceals the limp she had developed as a teenager.

After reaching the farm, she pulls out the work-clothes she has carried with her. First, she slips her arm into a scruffy blue shirt worn over her saree, and then wraps a long, yellow printed-nighty around her waist to safeguard from pollen dust. On top of it, she ties a torn green chiffon-cloth in a manner resembling a pouch, to carry a few gandu hoovu ('male flower') of the okra plant. With a faded white towel around her head, Ratnavva, 45, begins her work holding a bunch of threads in her left hand.

She picks a flower, and gently bends the petals and smears pollen powder from the male cone across each stigma. She marks the pollinated stigma by tying a thread around it. With her back bent, she rhythmically pollinates every flower along the rows of okra plants in the farm. She is skilled in hand-pollination – her occupation since she was a girl.

Ratnavva belongs to the Madiga community, a Dalit caste in Karnataka. She lives in the Madigara keri (Madiga quarter) of Konanatali village, in Ranibennur taluk of Karnataka’s Haveri district. 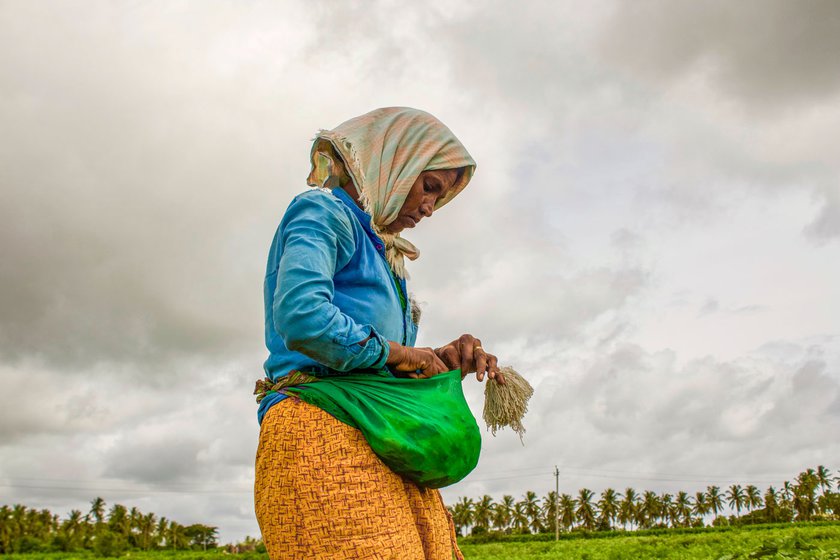 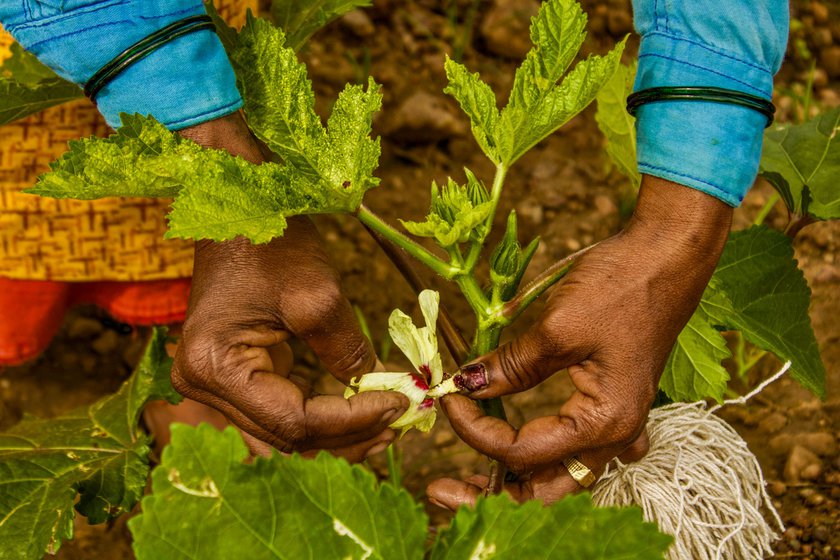 Ratnavva S. Harijan picks the gandu hoovu (' male flower') from the pouch tied to her waist to pollinate the okra flowers. She gently spreads the pollen from the male cone to the stigma and ties the flower with a thread held in her left hand to mark the pollinated stigma

Her routine starts at 4 a.m. every day. She completes the household chores, serves breakfast and tea to her family, prepares lunch, and grabs a quick bite before heading out to the farm at 9 a.m.

The first half of her day is spent on pollinating the stigmas of close to 200 okra plants, covering more than half of the three-acre plot. She takes a quick half-hour lunch break at noon and returns to the farm to peel the layers of the flower buds, keeping the stigmas ready for pollination on the following day. The daily wage fixed by the landlord for this work is Rs. 200.

She learnt the techniques of hand-pollination quite early. “We don’t own land, so we have been working on other’s lands,” she says. “I did not go to school. I started working even before I reached puberty. We are poor, you see, so we had to do this. At that time, I used to remove weeds and cross the tomato crop.” She uses the words cross and crossing to refer to her work of cross-pollinating flowers by hand.

Eldest of eight children, most of them girls, she was married off to Sannachoudappa M Harijan, an agricultural labourer in Konanatali. “My father was an alcoholic, so I was married off early, within a year of reaching puberty. I don’t know how old I was back then,” she says. 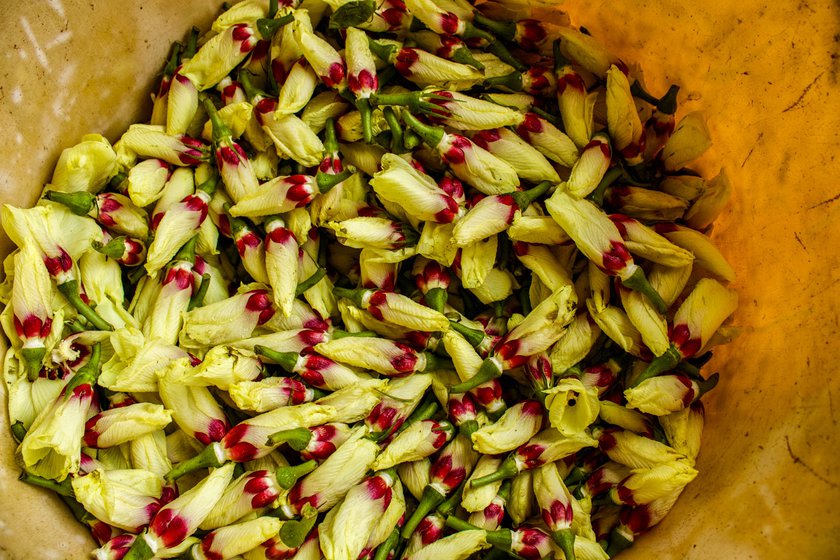 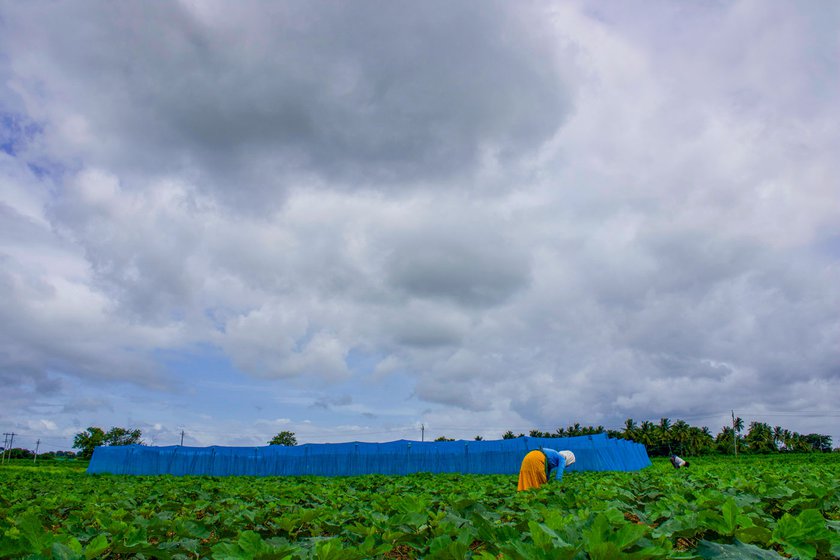 Left: Flowers that will be used for pollination are stored in a vessel. Right: Ratnavva pollinates the stigmas of about 200 okra plants within the first half of the day

In Tirumaladevarakoppa, Ratnavva used to earn Rs. 70 a day to pollinate the plants by hand. When she started working in Konanatali 15 years ago, the wage was Rs. 100 a day, she says. “They [the landlords] kept increasing it by ten-ten rupees every year, and now I get 200 rupees.”

Hand-pollination is a vital process in seed production in Konanatali, where hybrid varieties of vegetables like okra, tomato, ridge gourd and cucumber are grown. It is usually carried out in monsoon and winter seasons. Vegetable seeds, followed by cotton, are the major agricultural commodities produced in the village, where the net sown area is 568 hectares (Census 2011). Karnataka and Maharashtra lead in vegetable seed production in the country and the private sector plays a major role in it.

Laborious and dexterous, hand-pollination requires a workforce with sharp vision, agile hands, and immense patience and concentration, to handle the minutest part of the flower with utmost care. Women are preferred over men to do this work – to the extent that autorickshaws are hired to bring women agricultural labourers from neighbouring villages to Konanatali during the season.

On any given day, Ratnavva works in the farm of Parameshappa Pakkirappa Jadar, a landowner who belongs to Ambiga community (listed in the Other Backward Classes, or OBC, category), whom she owes Rs 1.5 lakh. She says that the money she borrows from him, without interest, is considered as an advance payment for her work.

“I don’t get cash on hand now. The landlord keeps a record [of the number of days worked] and retains my wages for the loan repayment,” she says. “We repay our loans by working in the farm and then borrow again when we are in need. So we keep borrowing and repaying.” 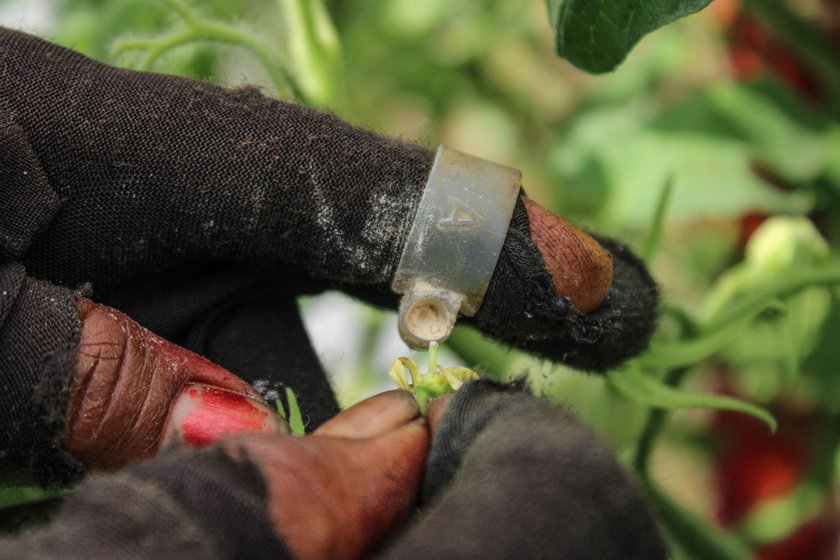 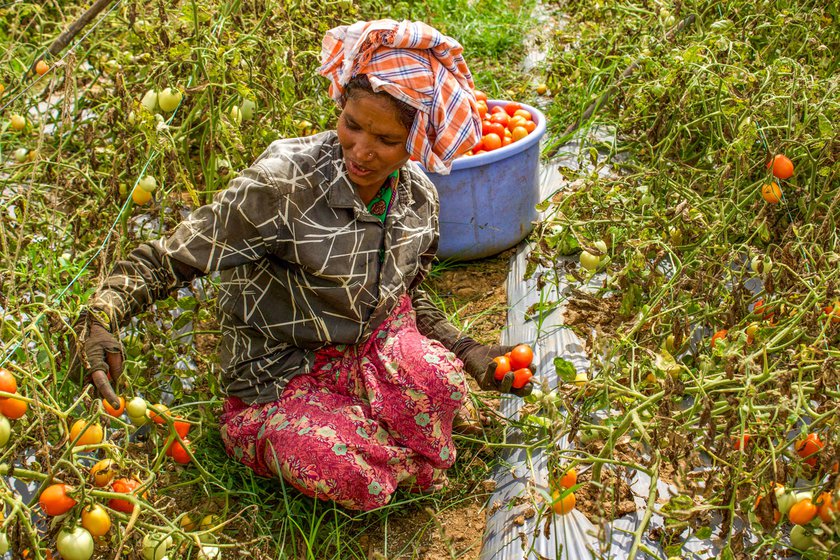 Left: Pollen powder is applied on the stigma of a tomato plant flower from a ring. Right : Ratnavva plucks the ‘crossed’ tomatoes, which will be harvested for the seeds

The toughest work period for Ratnavva is the monsoon, from July to September, when okra and cucumber plants are pollinated. Breeding of cucumbers requires working at a stretch, for at least six hours, without any breaks. And the okra buds have sharp surfaces that injure the fingers.

On the day I met her, in August, Ratnavva had glued a piece of her son’s nail to her thumb because she needed a sharper edge to peel the layers of okra buds. She had taken a two-day break from Parameshappa’s farm to work at another farm, filling in for her 18-year-old son, Lokesh, who had fallen ill. He had started working to help his mother repay a loan of Rs. 3,000, which she had borrowed for his college admission.

It is Ratnavva, however, who carries the entire financial burden of her family comprising six members. Besides covering the daily expenses of her husband, mother-in-law, three college-going children and herself, she spends on the exorbitant medical bills of her ailing husband.

In the month of August alone, she borrowed Rs. 22,000 from the landowner for her husband’s health expenses. His platelet count had drastically fallen after a bout of jaundice and he had to be taken for blood transfusion. The nearest government hospital with these facilities is in Mangalore, nearly 300 kilometres from their village.

The landowner gives her money when she needs it. “I borrow for food, hospital and daily needs. He understands our problems a little, and lends us so much money. I go only there [to work], and nowhere else,” says Ratnavva. “I haven’t paid back the full amount yet. How much can I repay all on my own?” 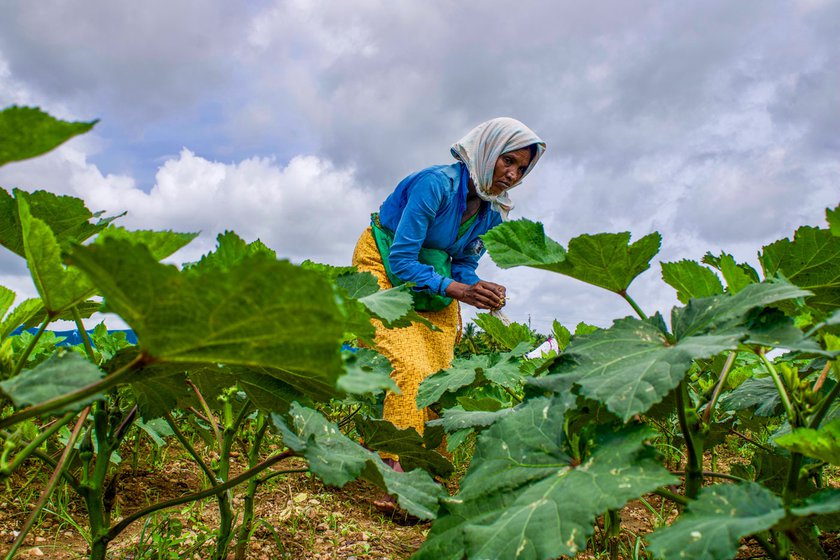 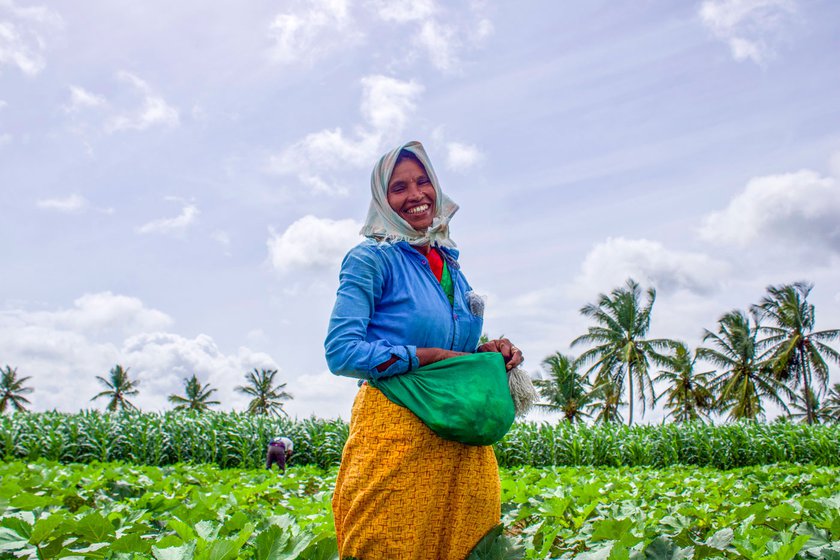 Left: Ratnavva looks for flowers of the okra plants to pollinate them. Right: Her bright smile belies her physically strenuous labour over long hours

This never-ending cycle of financial dependence has obligated her to work whenever the landowner demands. She is also at a disadvantage to negotiate wages. While women from neighbouring villages who work in Konanatali get Rs. 250 a day for eight hours of work, Ratnavva’s wage remains at Rs. 200 irrespective of the number of hours she works in a day.

“That is why I have to go whenever they call me to work. Sometimes the work starts at six in the morning and goes beyond seven in the evening. If there is no crossing work, I get only 150 rupees a day for removing weed,” she explains. “So, I cannot say anything if I borrow money, I have to go whenever I am called. I cannot ask for more wages.”

Debt is not the only factor devaluing Ratnavva’s labour. On various occasions, Ratnavva gets called to do chores for a Lingayat family. The age-old casteist custom of okkalu paddhati (also called bitti chakri, ‘unpaid labour’), though outlawed, remains in practice in Konanatali. The custom binds a Madiga family to a family of the Lingayat community, a dominant OBC group, and forces them to work for free in the latter’s home.

“Whether it is a wedding or any function, or if anyone dies in their house, we have to clean their house. It takes a whole day to do it. We have to do all the work. If there is a wedding, we spend eight whole days,” says Ratnavva. “But they won’t let us inside their house; they keep us out and give us some puffed rice and tea. They won’t even give us a plate. We bring our plates from our house. Sometimes they give a lamb or a calf, but they don’t give us money. When their cattle dies, they call us to remove the carcass.”

Four years ago, when a member of that Lingayat family got married, Ratnavva had to buy a new pair of slippers as part of the caste tradition, offer puja to it and gift it to the bridegroom. It was only a couple of years ago that she decided to stop working there, after many failed attempts to earn from her labour. Her decision, she says, has angered the Lingayat family. 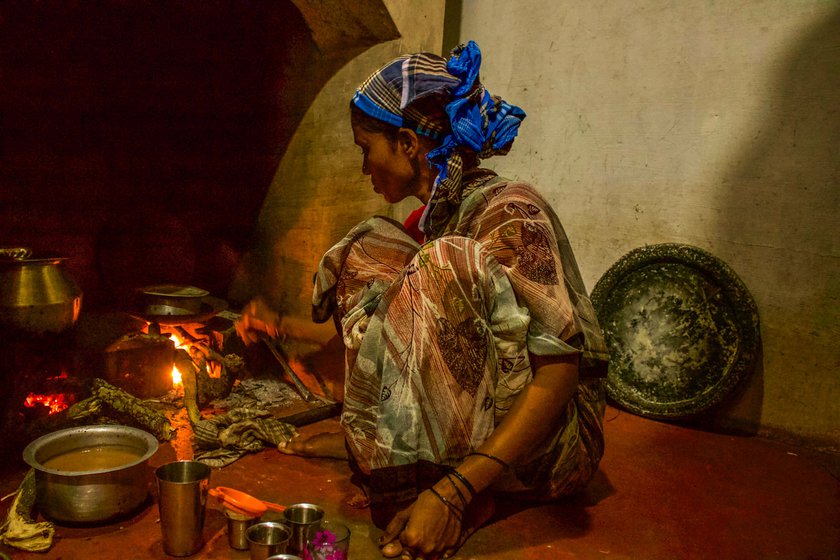 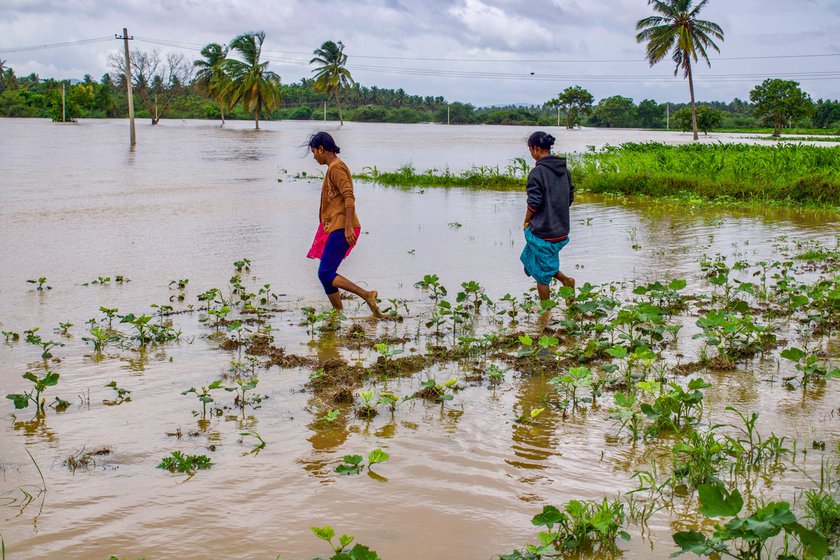 Left: Ratnavva at home in Konanatali. Right: Her daughter Suma walks through their land with her cousin, after rains had washed away Ratnavva's okra crop in July

This year, with some financial help from Parameshappa, Ratnavva planted okra and maize in a half-acre plot in the village, allocated to her husband by the government. However, in July, rain played havoc, flooding the small pieces of land allotted to the Madigas along the Madaga-Masur lake in Konanatali. “Okra was planted in the Harijans’ [Madigas’] lands this year, but everything went under water,” she says.

The state apparatus has not stepped in to ease Ratnavva’s burden. A landless labourer, she is not considered beneficiary of any government welfare measures specific to farmers. She has neither received compensation for the crop she lost nor has she been able to claim the state’s monthly allowance of Rs. 1,000 for differently abled persons, even though she has a disability certificate.

Perennially short of cash despite spending long hours doing physically strenuous labour, Ratnavva depends on loans from microfinance companies, which has further entangled her in indebtedness. In addition to what she owes Parameshappa, she has a debt of close to Rs. 2 lakhs, with interest rates ranging from 2 to 3 per cent.

In the last two years, she has borrowed from at least 10 different sources for the construction of a room in her house, college fees and medical expenses. For day-to-day expenses, she reaches out to women from the moneyed Lingayat families. “Last year, I was paying an interest of Rs. 2,650 per month on the money I had borrowed [from all sources],” she says. “Ever since the Covid-19 lockdown, I don't have any money to pay even the interest amount, but I continue to borrow for expenses every month.”

Even with debts piling up, Ratnavva is determined not to pull her children out of college. She has also ensured that her daughter, Suma, doesn’t continue the tradition of bitti chakri . “Neither my leg nor I were in a strong position. I could not walk away. But my children had to be released from this [bondage], or else they would have had to leave school. So I simply kept on working,” she explains. Undeterred by her difficulties, Ratnavva declares, “I will educate them as much as they want.”