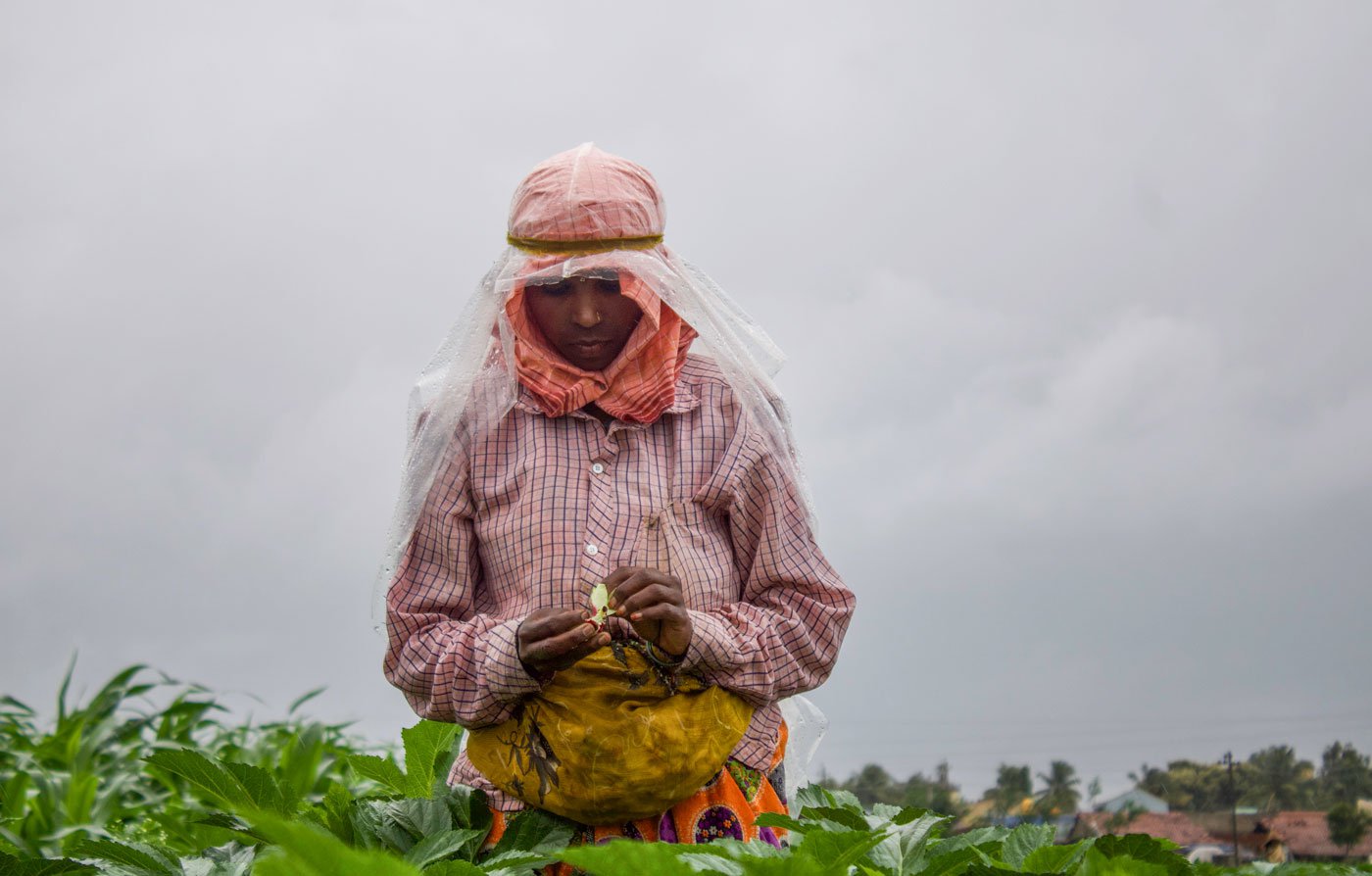 In Haveri: 'We work hard, but we can't save'

Women agricultural labourers like Mangala Harijan, who migrate to work as hand-pollinators in Karnataka's Haveri district, earn meagre sums of money despite toiling for the billion-dollar seed industry

Mangala Harijan remembers every village she has travelled to for work. “Kunchur, Kuragund, Kyatanakeri … I had also gone to Rattihalli one year,” she says listing the names of villages in Hirekerur taluk of Karnataka’s Haveri district. An agricultural labourer, Mangala commutes about 17-20 kilometres every day from her remote village to work on farms for a daily wage.

“I’ve been going to Konanatali since two years,” she tells me. Konanatali and Menashinahal, Mangala’s village, are both in Haveri's Ranibennur taluk . Hirekerur taluk is about 35 kilometres from there. Mangala and other women from her neighbourhood in Menashinahal’s Madiga keri – a colony of the Dalit community of Madiga, to which they belong – travel for work across Haveri in small groups of 8 to 10.

They each earn Rs. 150 a day, but, for a few months in the year, they get Rs. 90 more, when they work as hand-pollinators. For this work, they travel across the district, and are picked up and dropped back home in autorickshaws arranged by the farmers on whose land they are hired to work. “The auto drivers charge Rs. 800-900 for the day, so they [the farmers] deduct Rs. 10 from our wage for it,” says Mangala, adding, “Before, there were no autos to travel. We used to walk.”

Of slight build and visibly underweight, 30-year-old Mangala lives in a one-room thatched hut with her husband – he is also a daily-wage labourer – and their four children. An incandescent bulb glows in their hut, where a corner is designated for the kitchen, and another, to stack clothes. A broken steel wardrobe is pushed to a wall on the other side, and the space left in the middle of the room serves as the dining and sleeping areas. Outside, a raised stone is where she washes clothes and vessels. 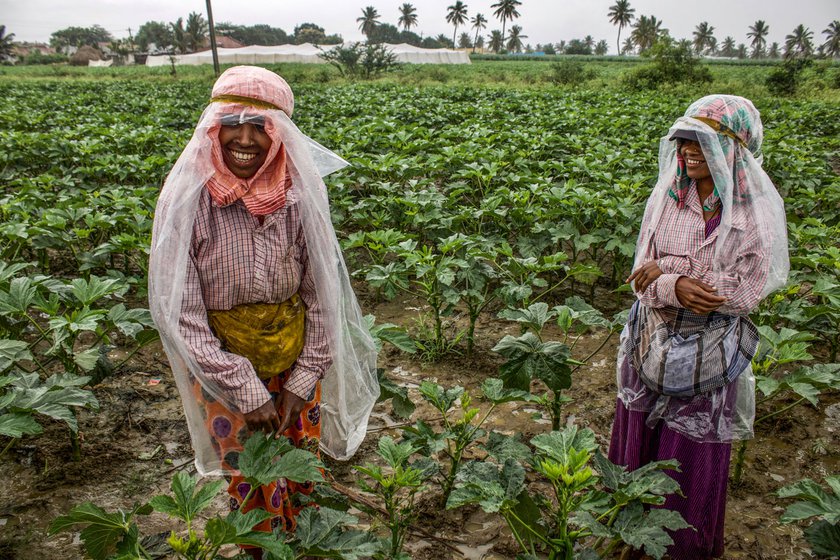 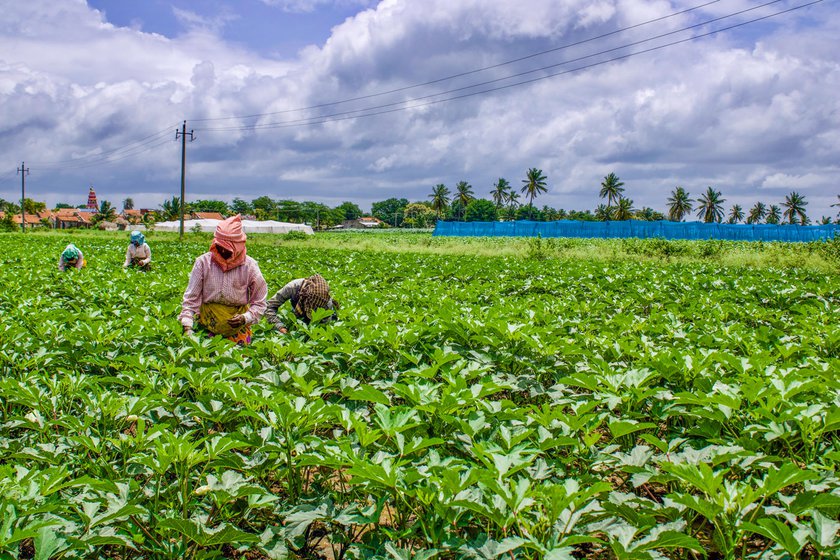 Left: Mangala Harijan (left) and a coworker wear a plastic sheet to protect themselves from rain while hand pollinating okra plants. Right: Mangala and other women from Menashinahal village in Ranibennur taluk, working at the okra farm in Konanatali, about 12 kilometres away

“It is only this year that we are getting paid 240 rupees a day for the crossing work. Until last year, we were paid 10 rupees less,” Mangala says. Labourers like her, involved in cross-pollination of crops by hand (the crops are then harvested for seeds), refer to the process as cross or crossing .

During the winter and monsoon seasons, when hand-pollination work is available, Mangala earns at least 15-20 days a month. She helps breed the hybrid varieties of tomato, okra and gourd for their seeds, which are produced by farmers for private seed companies. The value of the hybrid vegetable seed industry in India, for which Mangala works at the elementary level pollinating the plant flowers, is Rs. 2,600 crores ($349 million), according to the National Seed Association of India (NSAI). Maharashtra and Karnataka are the highest producers of vegetable seeds in the country, and in Karnataka, Haveri and Koppal districts are the centres of vegetable-seed production.

Across rural Haveri, women are willing to go long distances to earn a little more than what they would working on farms in their village. When Rajiya Aladdin Shekh Sannadi, 28, fled an abusive marriage of four years and returned to her parental home in Kudapali village in Hirekerur, she had to look for work to feed her two daughters.

In her village, farmers cultivate maize, cotton, groundnut and garlic. “We get only 150 rupees a day [doing farm work]. We can’t even buy a litre of oil with it. That is why we go to other places to work,” says Rajiya. She didn’t think twice when her neighbour persuaded her to join the hand-pollinators’ group. “She asked me what was I going to do staying at home. So, she took me with her to work. We get Rs. 240 a day for this work.” 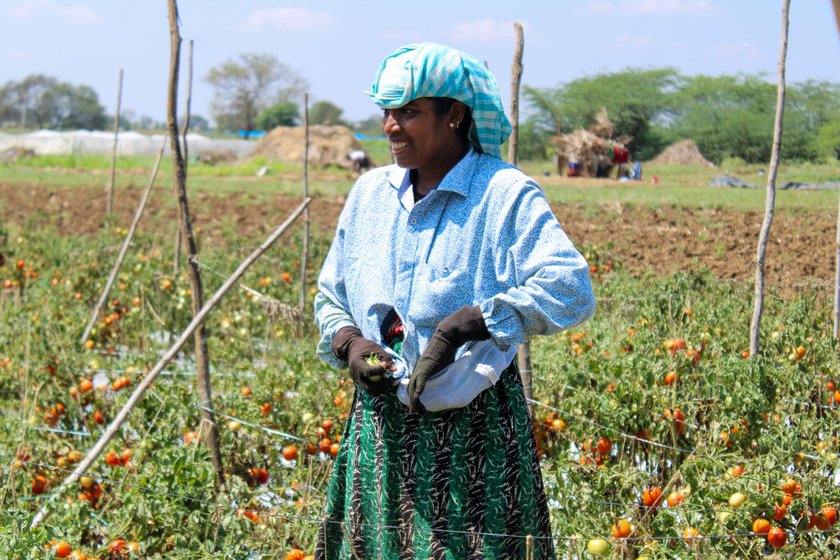 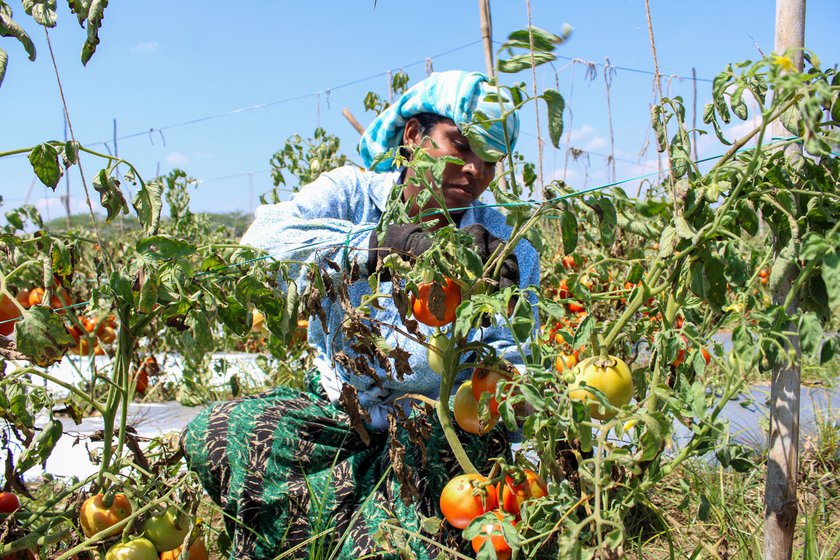 Tall and lean, Rajiya makes a striking figure. She was married off at 20 to an alcoholic man and went to live with him in Shirahatti taluk , Gadag district. She couldn’t escape dowry harassment despite the fact that her parents gave what they could. “My parents gave three sovereign gold [a sovereign weighs eight grams] and Rs. 35,000 cash. In our community, we give vessels, lots of them, and clothes. There was nothing left in the house, they gave everything,” says Rajiya. “My husband was accused in an accident case before we were married. He would keep demanding that I bring 5,000 rupees or 10,000 rupees from my parents for the legal expenses,” she adds.

Claiming to be a widower, Rajiya’s husband has remarried. She filed a case against him four months ago, demanding maintenance and child support. “He hasn’t visited his children even once,” she says. Rajiya is not aware of institutions like the women’s commission and department of women and child welfare where she could seek help. There is no one in her village to guide her with availing the benefits of government welfare schemes for agricultural labourers. She cannot claim any of the benefits meant for farmers because she is not considered a farmer.

“If I could get a job as a cook in a school, I would get a regular income,” Rajiya tells me. “But only those who have contacts get such jobs. I don’t know anyone. Everyone says things will be fine, but I have to do things alone, I don’t have anyone to help me.”

The farmer that Rajiya currently works for sells seeds to a large multinational seed company whose annual revenue is between Rs. 200 crores and Rs. 500 crores. But Rajiya earns a tiny fraction of its revenue. “The seeds produced here [in Haveri district] are exported to Nigeria, Thailand, Pakistan, Australia, US,” says an employee of that seed company who supervises seed production in 13 villages of Ranibennur taluk . 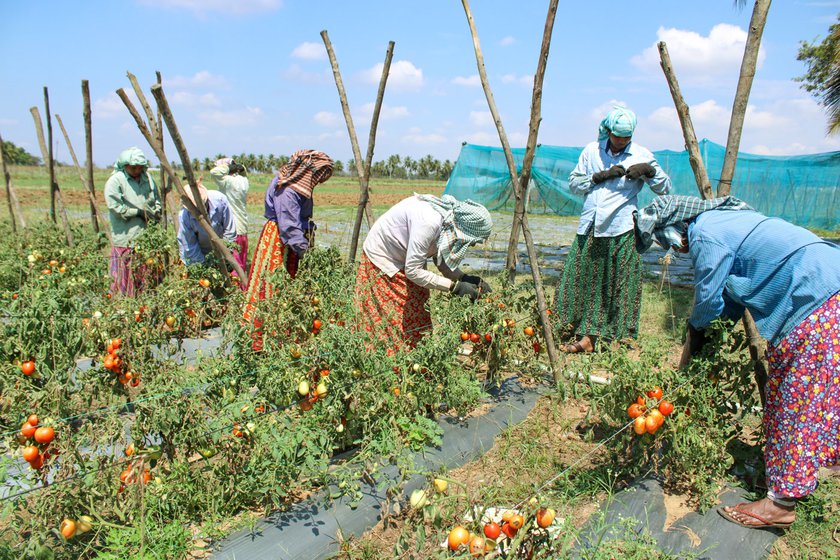 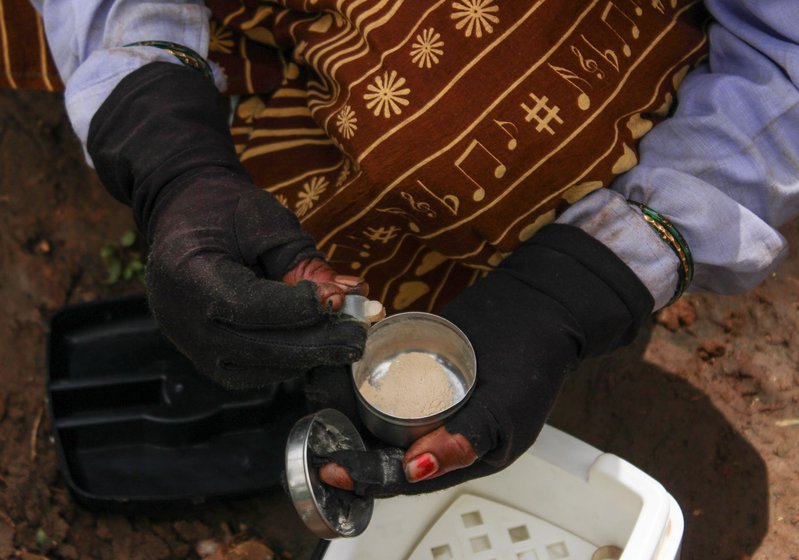 Left: Women from Kudapali village in Haveri's Hirekerur taluk preparing to harvest the 'crossed' tomatoes in Konanatali. They are then crushed to remove the seeds. Right: Leftover pollen powder after the hand-pollination of tomato flowers

Aided by government policies the private sector has become a significant player in the seed industry in the last few years. According to a report submitted by India’s ministry of agriculture and farmers' welfare to the Lok Sabha in March this year, there are 540 private seed companies in the country. Of these, 80 have research and development capabilities. The private sector’s share in seed production in India, the ministry says, grew from 57.28 per cent in 2017-18 to 64.46 per cent in 2020-21.

The billion-dollar seed sector’s growth has not ameliorated the living standards of Mangala and other women agricultural labourers in Haveri. Mangala’s neighbour, 28-year-old Deepa Doneappa Pujaar, says: “For a kilo of vegetable seed, they [the farmers] might get 10,000 to 20,000 rupees. In 2010, they used to get 6,000 rupees a kilo, but they don’t tell us how much they earn now. They just say it is the same amount.” Workers like her should get a raise, she says. “Our daily wage should be increased. We work hard, but we can’t save; money doesn’t stay in our hands,” she says.

Hand-pollination work comes with its burdens, explains Deepa. “It is heavy work. We have to cook, sweep, clean house, wash vessels … we have to do everything.”

“When we go for crossing, they [farmers] only look at the time. If we reach a little late, they ask us how can we expect Rs, 240 if we reach late. We leave there at 5.30 in the evening and it becomes 7.30 when we reach home,” adds Deepa. “Then we have to clean the house, drink tea and prepare dinner. It is midnight by the time we go to sleep. We have to go there to work because there is no work here.” Their eyes strain looking at the flowers’ stigma, she says. “It is the size of a hair strand.” 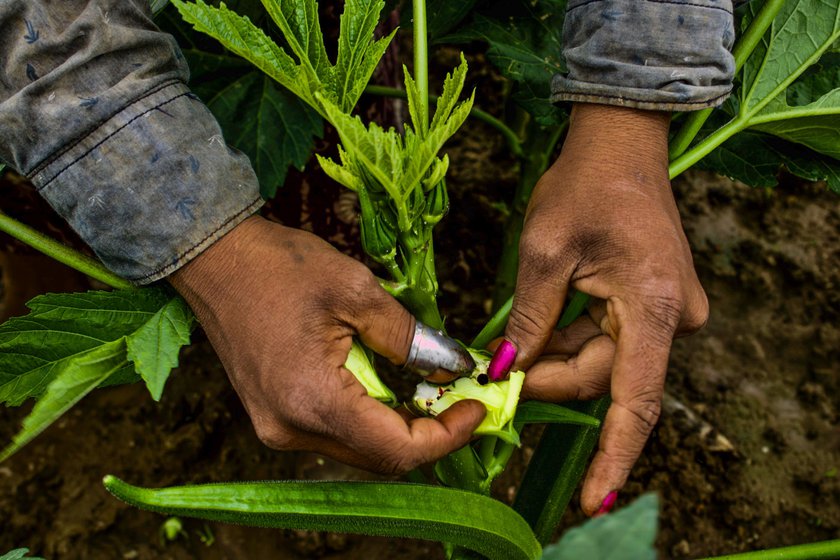 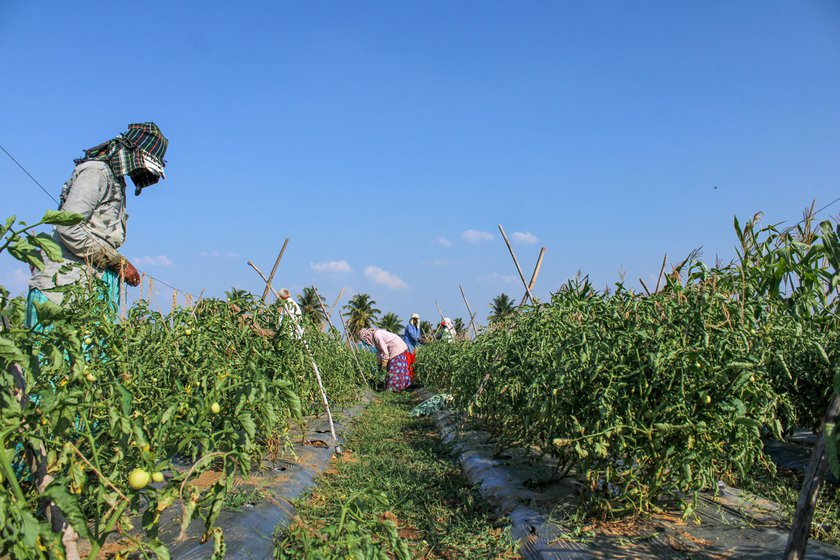 Left: A woman agricultural labourer peels the outer layer of an okra bud to expose the stigma for pollination. Right: Deepa Doneappa Pujaar (in grey shirt) ties the tomato plants to a wire while preparing to pollinate the flowers at a farm in Konanatali

The shorter period of demand for hand pollinators pushes the women to take up low-paid work the rest of the year. “ We get back to working for 150 rupees a day,”  Deepa says . “What can you get in that? A kilo of fruit costs 120 rupees. We have to buy groceries, snacks for the kids, host relatives who visit. If we miss the santhe [weekly market], we won’t be able to buy anything. So we don’t go to work on Wednesdays – we walk to the santhe in Tumminakatti [nearly 2.5 kilometres] to buy the week’s provisions.”

The labourers’ schedule is erratic, too, and varies from season to season, depending on the crops being harvested. “When we go to harvest maize, we wake up at four in the morning to reach the farm by five. Sometimes, if the road is kacha , autos don’t come, and we have to walk, so we use a mobile [phone] or a battery torch for light. We return home at one in the afternoon.” To harvest groundnut, they leave by 3 a.m., and return home before noon. “For harvesting groundnuts, we get Rs. 200 a day, but the work is for one month only.” The farmers send vehicles to pick them up sometimes. “Otherwise they ask us to manage the transport,” says Deepa.

After all this, their workplaces lack even the basic amenities. “There are no toilets. We have to look for a space where no one can see us,” Deepa adds. “The landowners tell us to finish everything at home before coming to work. They think it is a waste of the working hours.” It becomes difficult when they are menstruating. “We use a thick cloth or a sanitary pad when we have our periods. There is no place to change until we reach home after work. It hurts to stand all day.”

The fault lies in their situation, believes Deepa. “Our village is very backward. It is not ahead in anything,” she observes. “Else, why would we have to work like this?”