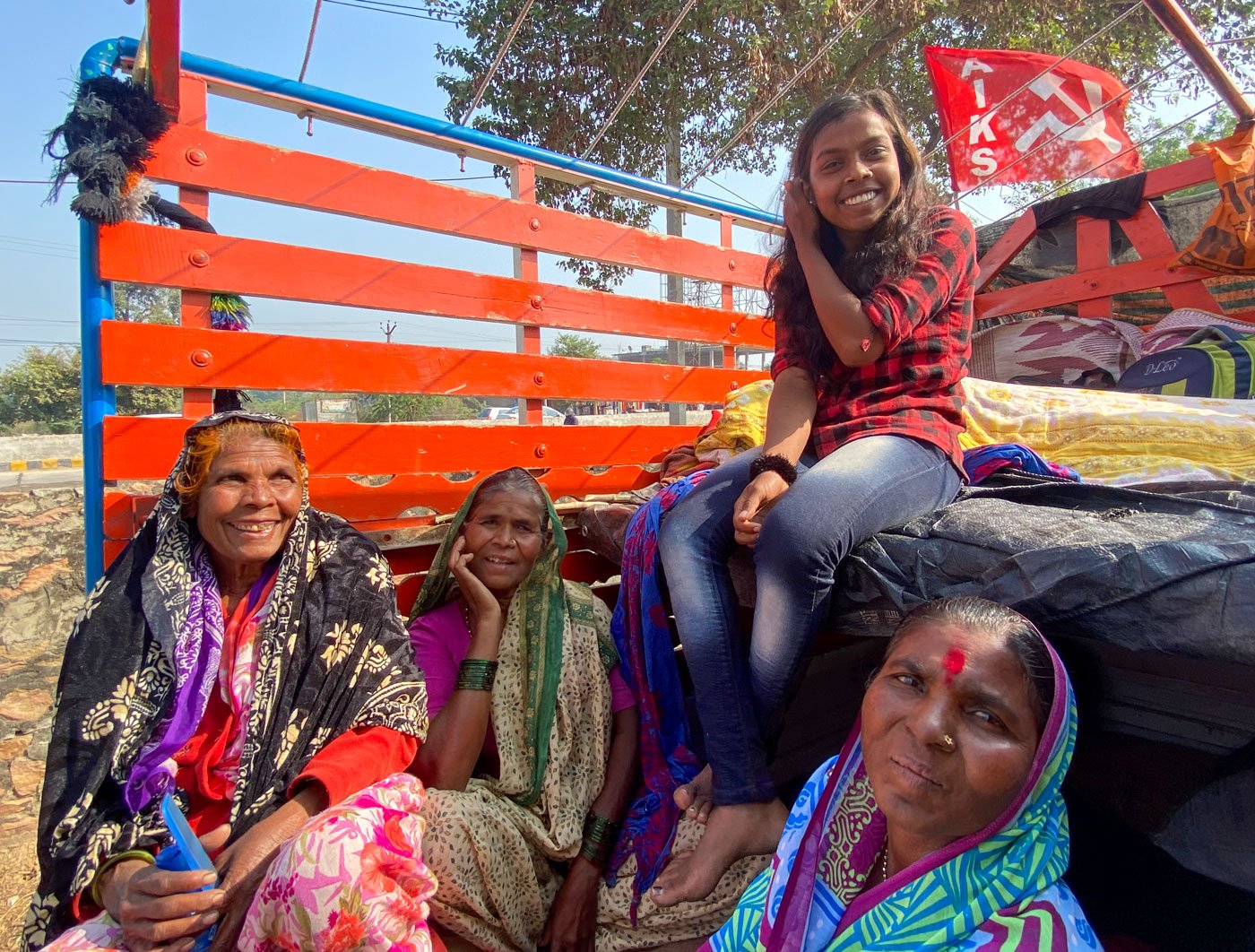 ‘I sing to raise awareness on farmers’ issues’

Savita Gunjal, a 16-year-old Bhil Adivasi farm labourer and singer-composer from Nashik district, kept everyone’s spirits and resolve high on the jatha to Delhi by Maharashtra farmers with her wonderful songs

After four days on the road and having covered 750 kilometres, the caravan of tempos and jeeps has stopped for lunch at a gurudwara in Kota, Rajasthan. It is cold in the afternoon, on December 24, and the travellers – farmers and farm workers from Maharashtra– are tired after a nightlong journey. But while they wait for a meal at the gurudwara’s community kitchen, Savita Gunjal’s songs keep their spirits high – Kamgar chya kashtana natavla jagala, jevan naahi potala, kapda naahi nesayla (‘The labour of workers makes the world beautiful, but they have no bread to eat or clothes to wear’).

“I have come here to sing,” says the 16-year-old Bhil Adivasi singer dressed in a dark red shirt and blue jeans. “I want to keep making the farmers aware of their rights. I want to tell the world about our condition,” says Savita, from Chandwad village in Chandvad taluka , Nashik district. She left Nashik on December 21 in the farmers’ vehicle jatha, to join the protests at Delhi’s borders. Lakhs of farmers have been protesting against three farm laws, first passed as ordinances on June 5, 2020, then introduced as farm bills in Parliament on September 14 and rammed through to become Acts by the 20th of that month.

Back in her village, Savita works as a farm labourer on weekends and during holidays, earning Rs. 150-200 a day. “If there is work then I have to go to the fields,” she says. During the Covid-19 lockdown, she spent a lot of her time working on the farms in Chandwad. “There was little work during the lockdown. I would take whatever I could get and earn as much as I could,” she says. She completed high school this year (2020), but could not begin college because of the pandemic.

Savita often sings at public gatherings across Chandvad with her group, which includes her older brother, Sandeep, and her friends, Komal, Archana and Sapna. She writes all their songs, with some help from her brother. Sandeep, 24, is a farm worker, who drives a tractor to plough and till land. It is hard work, says Savita, and his income depends on the size of land and the time it takes to work on it. For example, it takes him about three continuous days and nights to plough 6-7 acres of land, for which he earns about Rs. 4,000.

Watching her brother hard at work inspires her to create her songs. “I sing to raise awareness about the everyday issues of farmers. Day after day, they do hard labour in the fields, but still they don’t get proper prices for the grains they cultivate. This is why farmers have fallen behind. In our country the poor keep becoming poorer and the rich keep getting richer.”

The three new laws will cause more ruin, say the protesting farmers. The laws are: The Farmers’ Produce Trade and Commerce (Promotion and Facilitation) Act, 2020 ; The Farmers (Empowerment and Protection) Agreement on Price Assurance and Farm Services Act. 2020 ; and The Essential Commodities (Amendment) Act, 2020 . The laws have also been criticised as affecting every Indian as they disable the right to legal recourse of all citizens, undermining Article 32 of the Indian Constitution. 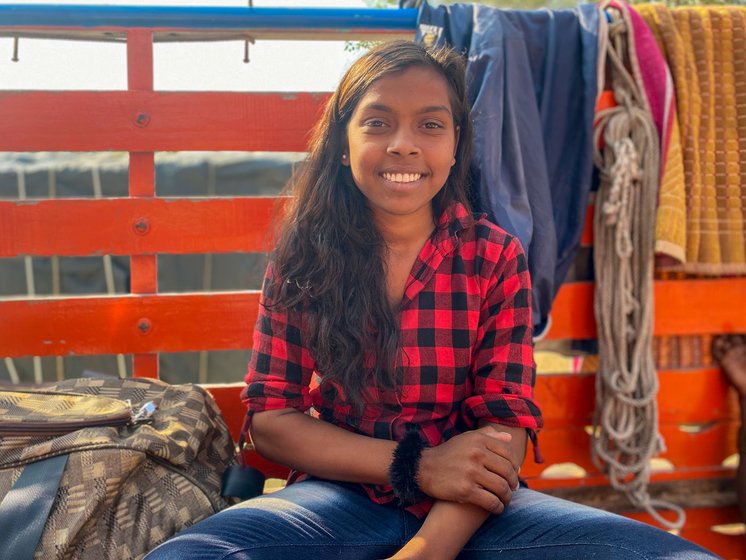 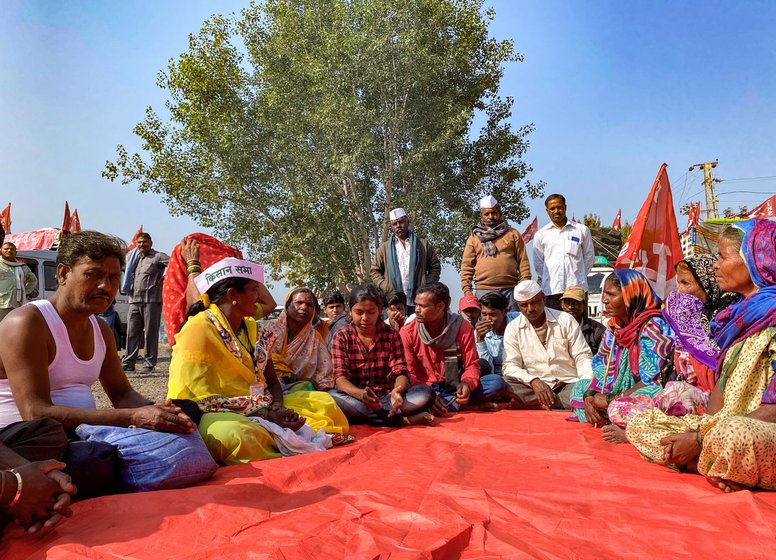 Savita’s family owns three acres of land, which they use for subsistence farming. Her father, Hanumant Gunjal, 45, and mother, Tai Gunjal, 40, are both farmers. They grow wheat, bajra, rice and onions. Savita’s younger sister, Anita, who studies in Class 5, helps their mother in cultivating their land. Her other brother, Sachin, 18, studies engineering in Chandvad. Like Sandeep, he ploughs and tills land, but part-time.

Kalaybai Gunjal, Savita’s 66-year-old grandmother (extreme left in cover image on top), is with her on the vehicle jatha . When she was 16, Kalaybai became the first woman leader of the All India Kisan Sabha in Chandwad. “My aaji (grandmother) encourages me to sing more. Aajoba (grandfather) taught her to sing, and then she taught me. She tells me to write my own songs,” says Savita.

Poet Annabhau Sathe and activist Ramesh Gaichor also inspire Savita. “I think of Annaubhau when I write music. His song, Mat ghutghut kar rehna, sehne se julum badhta hai (‘The more you suffer in silence, the more you will endure’), is one of my favourite songs. He is a revolutionary. Just like him, I want my sisters to fight against their oppressors. Our country does not respect women. We get raped and nobody cares. By singing his songs, I want to encourage girls to fight, because only then will get our freedom.”

“When I sing, I feel like my life has a purpose. I will sing all the way to Delhi,” she says, walking towards the tempo where 20 farmers were waiting for her to lead the chorus.