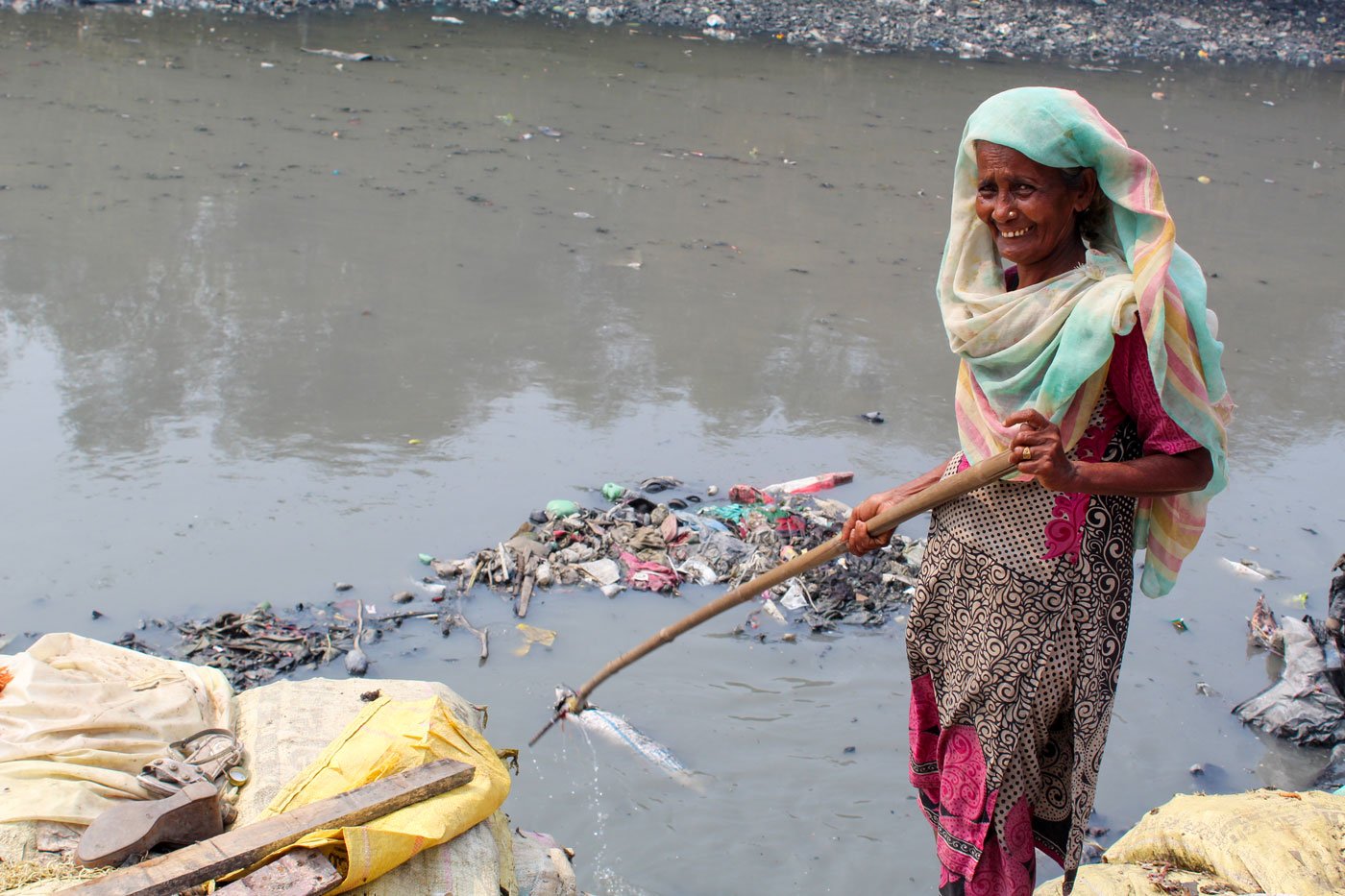 Kitabun Nisa Shaikh, a 75-year-old waste picker who works near the huge Deonar dumping ground in Mumbai, has braved a life of poverty and violence to take care of her family

Kitabun Nisa Shaikh is standing on the edge of a hillock of rubble and garbage, picking out plastic from a nallah slowly flowing by her house in Rafiq Nagar. Some of the waste has slithered there from the adjoining Deonar landfill, some of it is garbage thrown right into the open drain. Using a long wooden stick with a hook, she manages to draw in a pink plastic bottle entangled in a slimy black rag. Then she reaches across with the stick for the next item of value to her.

She does this for around six hours a day, her orange hair glowing in the sun, her back bending with the effort at the age of 75. Glass beer bottles and plastic water bottles are prized items, which re-sell for more than other waste material. Every alternate day, when 12 to 15 kilos of plastic have been collected, Kitabun’s daughter-in-law Zahida puts it all in a polythene sack and carries it on her head to a scrap dealer in the Baba Nagar locality, a 15-minute walk away. In return, the family earns Rs. 200-300 – or around Rs. 1,000 a week. “We have to do this [work] to fill out stomachs,” says Kitabun. “I don’t like it at all, but what else can we do?"

Near Kitabun’s hut are the outskirts of the 324-acre Deonar dumping ground. This is the largest of three such grounds in Mumbai (the other two are in Mulund and Kanjurmarg). It receives around 35 per cent of the roughly 9,500 metric tons of garbage that the city produces every day. The Deonar site was exhausted in 2016, but continues to be used – with a ‘last extension’ granted by the Bombay High Court to the Brihanmumbai Municipal Corporation to use the ground till December 31, 2019, for dumping solid waste.

Around the ground are several slum settlements like Rafiq Nagar. These are part of the city’s M-East ward, which has a population of 807,720 (Census 2011). The narrow lanes of Rafiq Nagar are flanked by clogged drains and heaps of garbage. The smell from the dumping ground hangs heavy in the air. Swarms of flies and mosquitoes hover everywhere.

Kitabun’s hut is at the end of a lane, at the very edge of that nallah . It’s a 100-square feet room that shelters 16 people – Kitabun’s three sons, Zahida and 11 grandchildren. “During heavy rains, the water from the gutter enters our house,” she says. “We move our important things like dal, rice and some clothes on to the top shelves. Most items get wet. We take shelter at neighbours’ houses [higher up the lane] till the water recedes.” 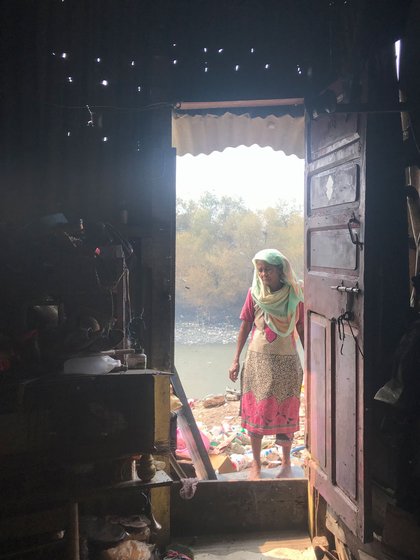 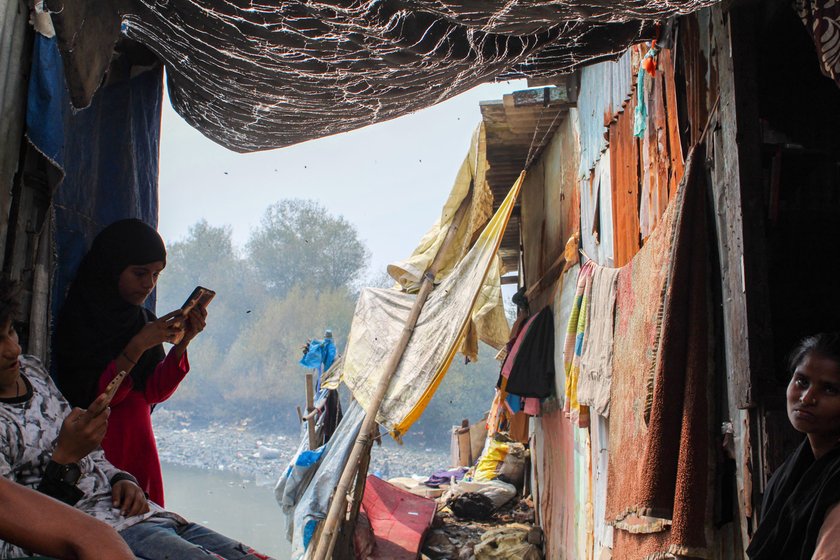 Left: Kitabun outside her 100-square feet room next to a nallah . Right: It shelters 16 people, including her grandchildren

It’s been more than five years since Kitabun and her family shifted to Rafiq Nagar. Before coming here, Kitabun had moved from Sewri in east Mumbai to Khalilabad city in Uttar Pradesh and then back to Sewri.

Her father worked as a helper on trucks in a factory in Sewri, and Kitabun grew up on the pavements of that locality. " Khelti thi, kudti thi, khaati thi… bas… [I’d play, romp around… that’s all I did],” she says, smiling widely, about her relatively relaxed childhood. She recalls those years with a sense of nostalgia. Her three older brothers and her mother, a homemaker, she says, cared for her deeply.

Kitabun left Mumbai for the first time when she was 25, to go to Khalilabad after her marriage to Sher Ali Shaikh, a truck driver, 12 years older than her. “Everything was fine at first, but a year later I saw the real side of my husband,” she says. He would barely talk to her, his bouts of temper escalated, he flared up at the smallest of things.

After three years of their marriage, Sher had an accident and hurt his head badly. Kitabun says she cannot recall the details. Perhaps not wanting to look after them, his family asked Sher, Kitabun and their two small children to leave the house. “I was pregnant with my third child then. We had no money and no place to go,” she recalls.

For a while, Kitabun says, they stayed on the streets of Khalilabad. Over time, she found work on a farm outside the city. There she would clean the farm owner’s house and work on the land in exchange for food and shelter. “One day while working I left Farzana, my eldest daughter, sleeping under the tree. When I got back I saw her lying dead in a pool of blood. A bull had stepped on her. She was only three years old,” Kitabun says, quietly.

After this incident, Kitabun, Sher and their children came back to the streets of Sewri. Sher found work as a private car driver and began drinking heavily. “Once he tried to stab me with a knife. Somehow I managed to throw a stool at him and ran away,” says Kitabun, of the violence that then became frequent. “He would give me only 60 rupees each month. From that money I was expected to take care of the household. So after he would leave for work, I’d go to and fill water drums for others, and that fetched me Rs. 150 a week. I fed my children from that money.” 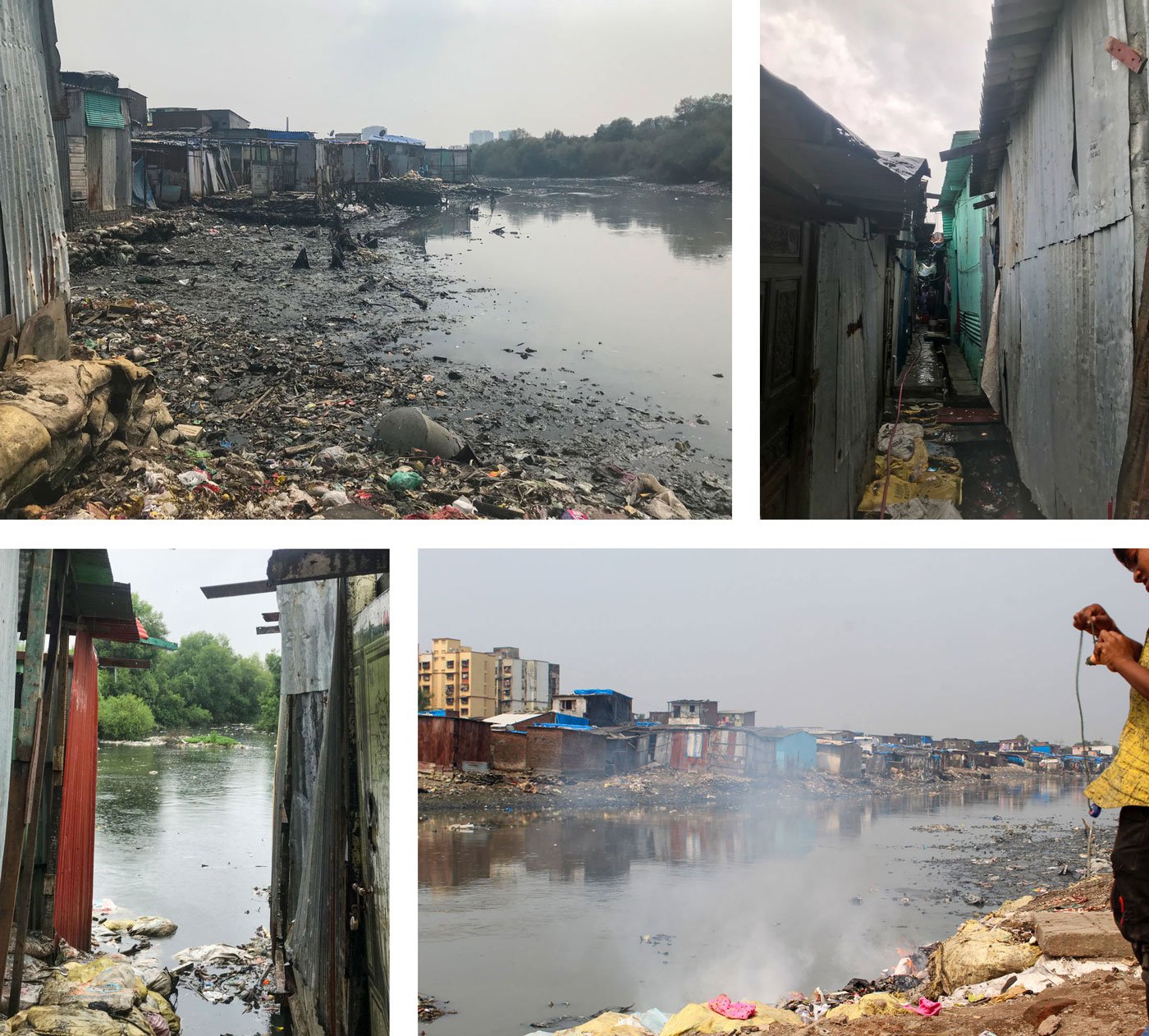 The lanes of Rafiq Nagar are flanked by clogged drains and heaps of garbage. Residents of M-East ward, where this colony is located, have a high incidence of illness

Sher Ali died of a lung ailment around 20 years ago. “ Zinda tha toh achcha tha. Mar gaya toh thode aansu kamm ho gaye [It was fine when he was alive. But after he died...my tears (pain) have reduced],” she says.

Kitabun then raised their five children alone, on the streets of Sewri. She started working as a domestic helper in nearby buildings. “I would go to work at 7 in the morning and returned only after 4 in the evening. My eldest son – 10 years old at the time – took care of his three younger brothers and a sister.” While away, Kitabun would worry about her children back home on the pavement. “I didn’t want anything to happen to them while I was working,” she says.

Her anxiety escalated after the communal riots of January 1993. One night, at around 9 p.m., Kitabun saw some men running with knives and kerosene-soaked cloth balls. “Everything was being destroyed. My neighbour kept screaming and crying. I’d locked the door with me and my children inside – that’s when I smelled the fuel. They were trying to burn us but somehow we managed to run,” she recalls.

“They set my house [on the pavement] on fire in front of me. I ran with my kids. There was chaos everywhere. A man was stabbed to death...” she adds. “Those two months of my life were hell. I feared for my children’s lives and we had to go in hiding.” Kitabun says she stayed for a while, along with others from her community, in an abandoned factory in Sewri and would rarely come out – only occasionally leaving to look for food or money.

Now, nearly 27 years later, the memory of those riots still frightens her. “We don’t let our kids go out much,” she says. “We don’t know what might happen to them.” 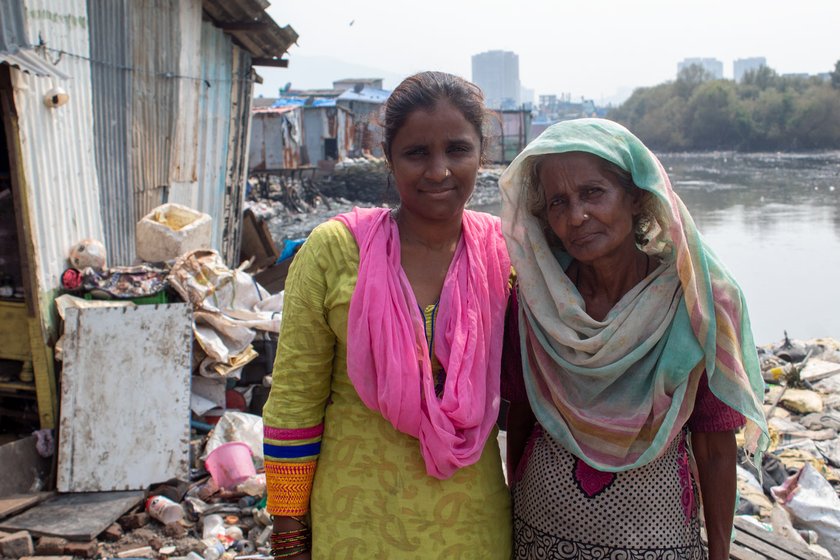 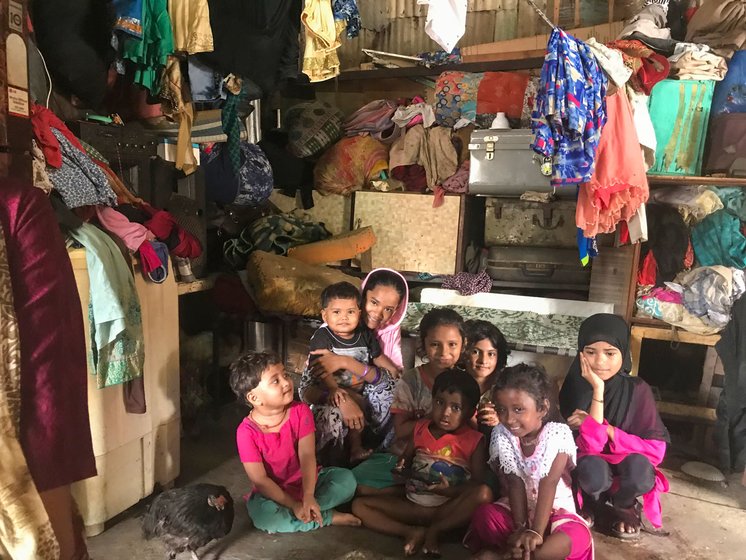 Kitabun with her daughter-in-law Zahida (left), who looks after the 11 children (right) of the family

There are other ways in which Kitabun’s family lives within a limited geography. None of her 11 grandchildren – their ages ranging from 3.5 to 16 years – goes to school. ( To make sure, I asked an established local NGO, and they confirmed this .) “An 11-year-old girl was molested in school,” says 28-year-old Zahida, who is married to Kitabun’s second son. “Ammi and I didn't want to put our children in a similar situation so we pulled them out of schools. Besides, other children in school would beat up my kids because we live in a nallah [sewer].”

Zahida works in about 6-7 houses at Sewri, some 13 kilometres from Rafiq Nagar (she commutes to work by train and rickshaw), cleaning floors, utensils and clothes. She looks after all the 11 children at home – her three daughters, a three-year-old of her younger brother-in-law, and seven children of her eldest brother-in-law. “Their Ammi left them five years ago,” she says. “She couldn’t take care of her children and ran away. I am their Ammi now.”

Zahida earns around Rs. 5,000 a month as a domestic worker. Her husband Abzal works in a garage, sometimes earning Rs. 150-200 a day. The two brothers-in-law do occasional daily wage labour. The fourth brother is estranged from the family and lives in Sewri. Kitabun’s daughter is married and lives with her husband and in-laws in a slum colony, also in Sewri.

When I visited Rafiq Nagar, Zahida’s 60-year-old mother Zarina, a former domestic worker, was in the final stages of tuberculosis. Zahida herself has been struggling with TB for almost two years. Working in and near the dumping ground is extremely hazardous. A 2015 report of the Tata Institute of Social Sciences, on an extensive survey of M-East ward, states that more than 50 per cent of the people surveyed reported heart disease, diabetes, respiratory ailments, and blood pressure, followed by tuberculosis.

“Beti hai vo meri, bahu nai [She is my daughter, not daughter-in-law],” Kitabun tells me about Zahida. “If anything happens to her, my whole house will fall apart.”

Kitabun now has hopes for her grandchildren – she wishes for them a life outside Deonar. “Mera kya he, mein kachre me paida hui thi, kachre me hi marungi [I was born in garbage, I’ll die in garbage],” she says. “I have struggled all my life. I want Allah to take me away now. If not, I’ll go mental with all the tension.”