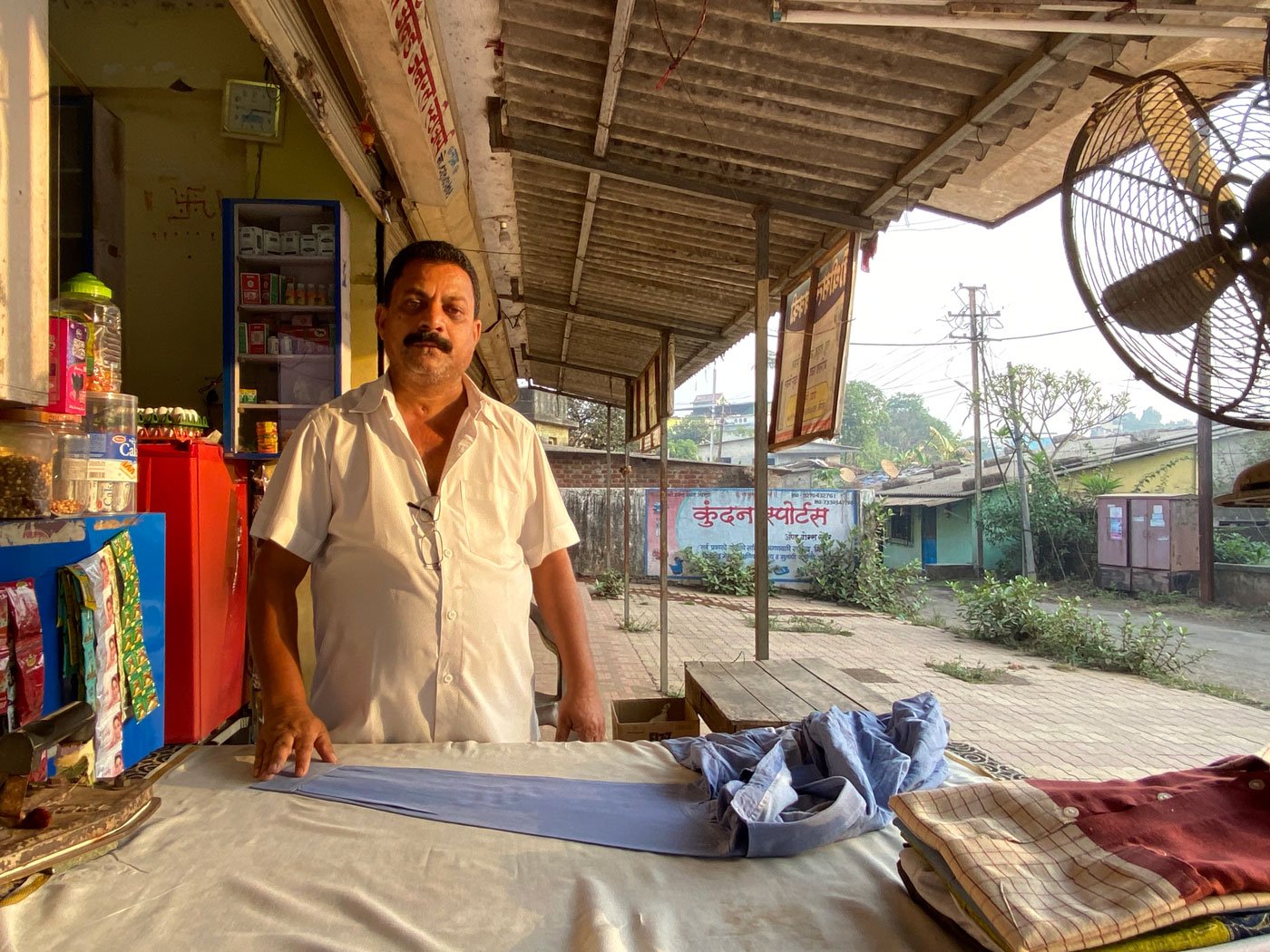 Ironed out of an income in Vada this lockdown

For families in Vada town of Palghar district who make a living by ironing clothes, the Covid-19 lockdown has reduced daily incomes to a trickle. Many are struggling to procure rations and seeking other work

Bundles of clothes no longer move back and forth from Samita’s chawl to the apartments nearby. Until two months ago, every morning, she used to collect assorted garments from families living in the Ashokvan complex of Vada town. Carrying the bundles in her hand and on her head, she would walk back two kilometres to her home in Bhanushali chawl in the same town. There, she ironed and neatly folded the clothes, and delivered them back to the families the same evening.

“Since the lockdown began, I have mostly stopped getting orders,” says 32-year-old Samita More, referring to the to-be-ironed garments. From at least four ‘orders’ a day till the lockdown was announced on March 24, Samita now manages only one or two a week. And her daily earnings of Rs. 150-200 – she charges Rs. 5 for ironing each shirt or trouser, and Rs. 30 for a saree – dropped to barely Rs. 100 a week in April. “How will I survive on only this much money?” she asks.

Samita’s husband, Santosh, 48, worked as an autorickshaw driver, but lost sight in one eye in 2005, when someone threw a stone at a tempo he was travelling in near Vada. “I help my wife iron clothes as there’s no other job I can do,” he says. “My legs hurt from standing four hours for ironing every day.”

Santosh and Samita have been ironing clothes for 15 years. “After his accident we needed money to eat and send our two sons to school, so I started this work,” Samita says. “But this lockdown has been really bad for us.” The family has used up their modest savings in the last few weeks and borrowed Rs. 4,000 from relatives to be able to buy groceries and pay their monthly electricity bill of around Rs. 900. 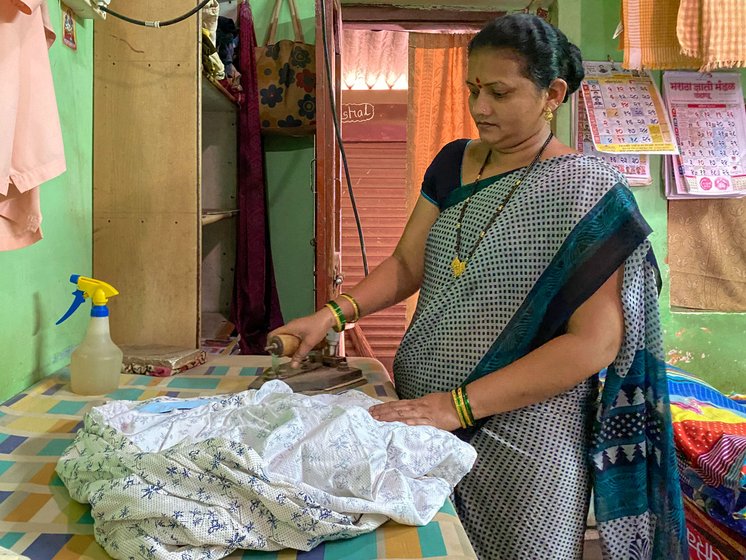 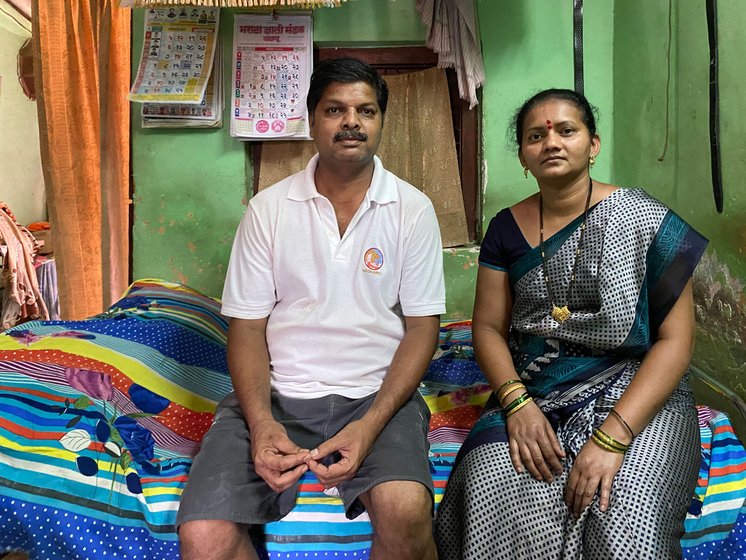 Santosh and Samita More have been ironing clothes for 15 years; they have used up their modest savings in the lockdown weeks and borrowed from relatives

On the same street as Samita, in Vada town of Maharashtra’s Palghar district, lives 45-year-old Anita Raut. She too makes a living by ironing clothes. “Even when my husband passed away six years ago, I somehow managed. But during this lockdown our business has completely shut down,” she says. Anita’s husband, Ashok, was 40 when he died soon after a paralytic stroke.

She lives with their 18-year-old son, Bhushan, who helps with the ironing. “My husband, his father and his grandfather all used to do this work,” says Anita, who belongs to the Pareet caste, also listed as Dhobi, an OBC community. (The other families quoted here are from the Maratha or other OBC communities.) “Her legs get swollen from standing 5-6 hours a day ironing clothes. So then I take over the work and also deliver orders myself in town,” says Bhushan, who is studying in Class 12 at a junior college in Vada.

“These are the months [April to June] when weddings take place, so we get many orders to iron sarees and dresses [ salwar kameez ] during this season. But now all the weddings have been cancelled due to the virus,” says Anita, who pays a rent of Rs. 1,500 every month for her single room in a narrow lane with open drains. “Last year I had to borrow some money from my sister for daily expenses," she says, and she also took a loan from her sister during Ashok's post-paralysis hospitalisation six year ago. "I promised to return the money this month but we've had no business. Now how will I repay her?” she asks.

Anil Durgude, 47, who lives in the same locality in Vada, was also counting on the extra ironing work during the April to June period. He needs the money for a surgery for the varicose veins on his right foot – a condition caused by weak or damaged vein walls and valves. “I have had this condition for two years now. It will require Rs. 70,000 for the operation in a private hospital in around 25 kilometres from Vada.

“But due to this lockdown my business has been shut,” says Anil, who endures constant pain in his leg. “I have to stand at least six hours a day ironing clothes. I don't own a cycle so my customers drop their clothes at my house and I give them a time to come and pick them up.” Before the lockdown, Anil managed to earn around Rs. 4,000 a month. For the past two months he has earned between 1,000 and 1,500 rupees, and is stretching out his savings, he says. 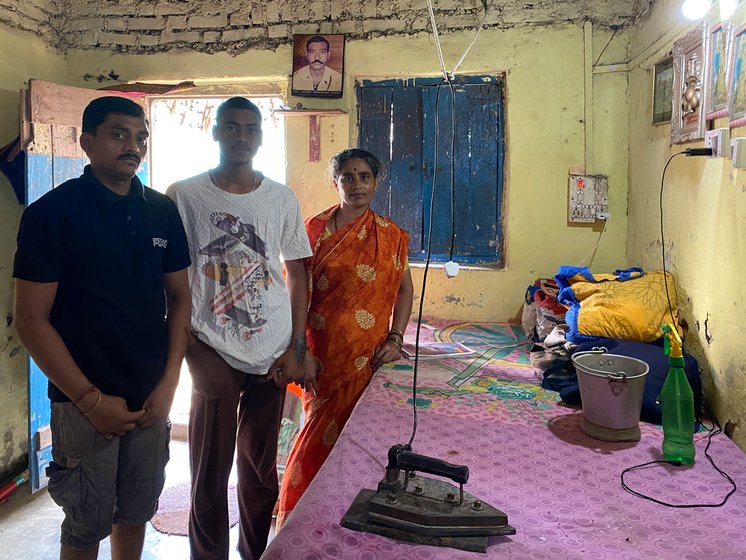 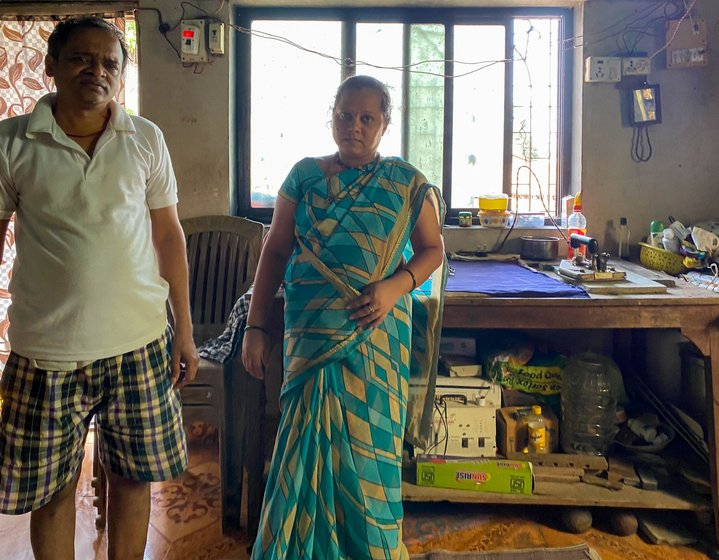 Left: Anita Raut, son Bhushan (centre) and nephew Gitesh: 'Our [ironing] business has shut down'. Right: Anil and Namrata Durgude: 'We are losing our daily income'

“My wife Namrata cannot take the heat that comes from ironing. She manages all the house work and also handles the accounts of our orders. We don’t have children but we take care of my late brother’s two sons. My younger brother passed away some years back in an accident,” Anil explains. The boys' mother works as a tailor, whose Rs. 5,000 a month income too has been hit hard by the lockdown. “We don’t fully understand the reasons behind this lockdown and don’t know when it will all go back to normal," Anil adds. "We just know we are losing our daily income."

The lockdown has impacted Sunil Patil's income too – before March 25, he earned around Rs. 200 a day from ironing clothes and Rs. 650 from running a small shop, the 'Mahalakshmi kirana and general store' that sells dal , rice, oil, biscuits, soap and other items. “Now my earnings have dropped to Rs. 100-200 per day,” he says.

Before Sunil moved to Vada with his wife Anju and their three children in October 2019, he worked as a helper in a grocery shop for Rs. 150 a day. “My sister told me about this shop in Vada, so I took a loan of 6 lakh rupees from her and bought this general store,” he says. Buying their own shop was a big step, full of hope, for the family.

Sunil has set up a table outside his shop for ironing and, before the lockdown, usually received 4-5 orders a day. “I started ironing because it gave me a stable income; the shop is there too, but from that we sometimes earn money, and sometimes we don’t.”

Anju, 48, adds, “I want to help my husband with ironing clothes, but my back starts aching if I stand for more than two hours. So I help run this shop. We can now open the shop only for three hours [from 9 a.m. to noon]. I have only sold two packets of Parle-G biscuits today. Even if the customer comes, what will we sell them? You can see our shop is empty.” The shop -- Mahalaxmi has some items from before the lockdown, but the shelves are sparsely stocked. “There's no money to stock up,” Sunil says.

The income that their 23-year-old daughter Suvidha brought in – Rs. 1,200 a month by giving tuition to children in Vada town – has also stopped, the classes are closed. “We had to postpone Suvidha’s engagement in April because of the lockdown,” Sunil says. “The groom’s father has threatened to cancel the sakharpuda [engagement] if I don’t pay him Rs. 50,000 for wedding expenses as he has also suffered losses during this lockdown.”

The Patil family’s ration card is not accepted in Vada town, so they buy wheat and rice in the market. That’s when they have an income coming in regularly

Watch video: ‘I can survive today, but I don’t have food for tomorrow’

Their other two children Aniket, 21, and Sajan, 26, are looking for work. “My eldest son used to work in a camera repair shop in Bhiwandi, but that business shut down [before the lockdown]. Aniket has just finished his graduation,” says Sunil. “Sometimes, I feel like committing suicide from so much tension, but then I realise we are all in this together. The next-door barber has not earned any money for many days. So, I sometimes give him some biscuits and [remaining] dal from my shop.”

The Patil family’s ration card is not accepted in Vada town since it is registered in Bhiwandi. On PDS, they would have got wheat for Rs. 2 and rice for Rs. 3 a kilo. Instead, says Sunil, “I buy wheat for Rs. 20 and rice for Rs. 30 per kilo from the market.” That’s when they have an income coming in regularly. “Now I am able to buy some rations once a week only after earning some money from the store. We eat only one meal on days when there have been no sales at the stop," Sunil adds, in tears.

The other families have devised lockdown coping mechanism too. Since April 1, Anita has taken up domestic work in a nearby building. That fetches her Rs 1,000 a month. “If I don’t go out for work, we will not have food to eat,” she says. “I have stitched a mask from an old worn out cloth. I wear it when I go to work.”

Both Anita's and Samita’s families have received Rs. 500 under the Pradhan Mantri Jan Dhan Yojana in April and in May. And in May (but not in April) both received an extra 5 kilos of rice free per person in addition to the 5 kilos on their ration card. Samita continues to iron a few clothes whenever she can. “Even though nobody wears shirts and pants in this lockdown, if I get an order I go out. My sons tell me not to leave the house, but they don’t understand that there’s no other way. Somehow, I have to earn money for them,” says Samita.

On returning home after collecting and delivering clothes, she washes her hands with soap – as instructed by her son after he watched a ‘how to’ YouTube video.