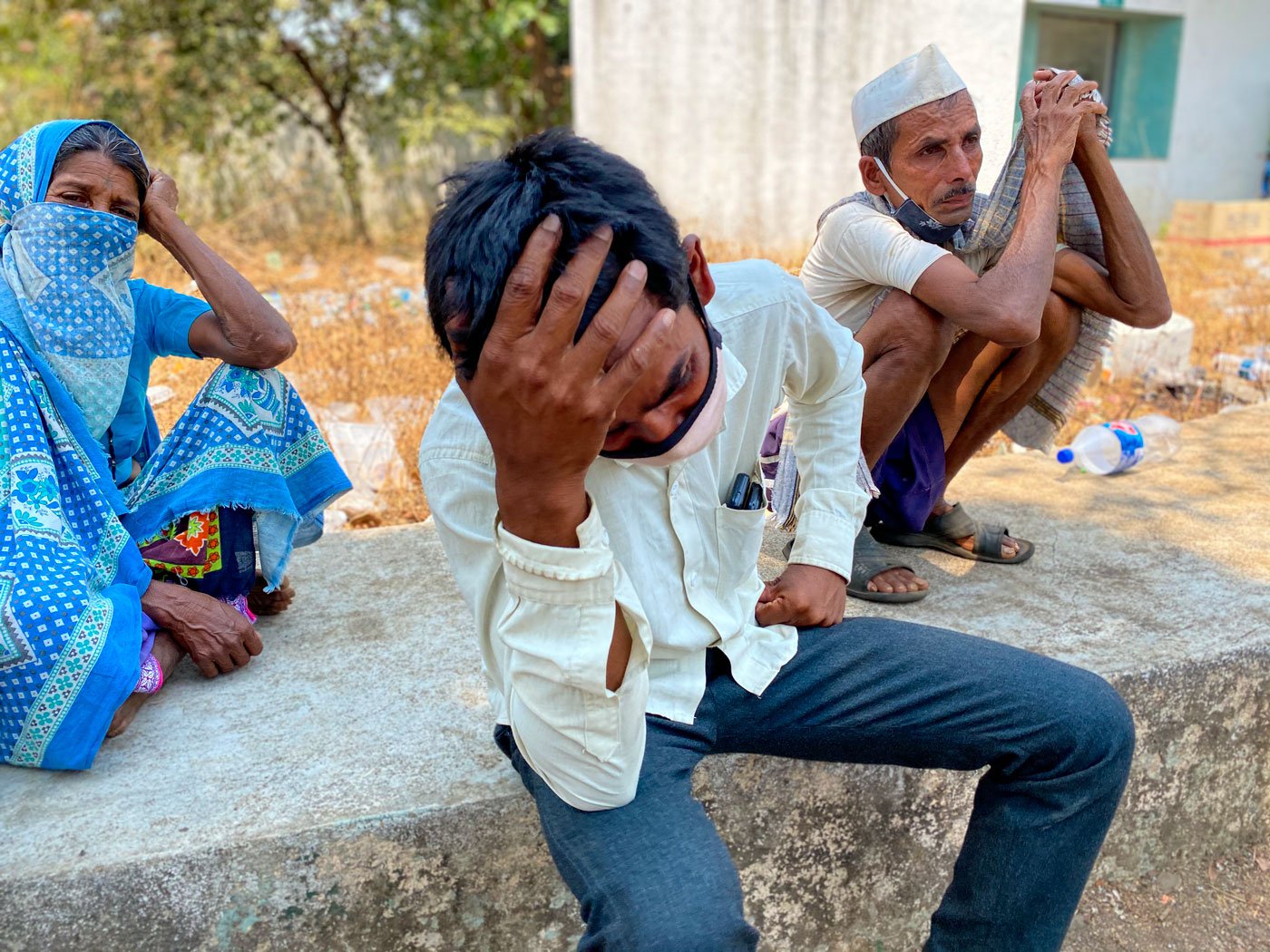 In Palghar, the price of a pandemic

Chaos reigns outside a state-run hospital in rural Maharashtra, with families – many from Adivasi communities – seeking beds or grieving a loss in a district ill-equipped to handle Covid’s onslaught

A woman is slipping in and out of consciousness in an autorickshaw parked in front of the main gate of the government hospital in Hatane. Another is beating her chest screaming: “Maza soniya, maza soniya, kuthe gela re maza soniya [Where have you gone my beloved]?” Loud cries resound from every direction. Some families have assembled in groups trying to figure out paperwork. A few are trying to arrange for a bed in another hospital.

It's noon on a hot Monday in early May, and there is absolute chaos outside ReVera Hospital in Hatane village of Maharashtra’s Palghar district.

Guru Chaudhary is sitting under a tree on a cement platform outside the hospital compound, making one call after another. He is delivering news of the death of his sister’s husband. “Devala priya jhala kaal ratri [He passed away last night],” he keeps repeating on the phone. “He was like a brother to me,” he tells me, grim and distressed. “Look at this video. He is fine here. My sister was inside with him in the hospital. His oxygen kept leaking from the bottle…She kept telling the doctor to come and check on him…”

Guru’s brother-in-law, 35-year-old Vaman Digha, was taken to two small hospitals near their village on April 23 before the family came to ReVera. “He couldn’t breathe properly. He had high fever too for a few days, so we got scared and decided to get him checked,” says Guru. “The doctor said he has pneumonia and might have Covid, and had to be admitted immediately. No hospitals nearby had beds, oxygen.”

The family had to travel nearly 60 kilometres in an ambulance from Takpada, their village in Palghar’s Mokhada taluka, to the state-run ReVera in the same district’s Vikramgad taluka . It’s the only Dedicated Covid Hospital in the taluka and has 200 Covid beds (half of them isolation beds and the rest with oxygen, ventilators or in ICUs; the data on this on the district government's website is not entirely clear). 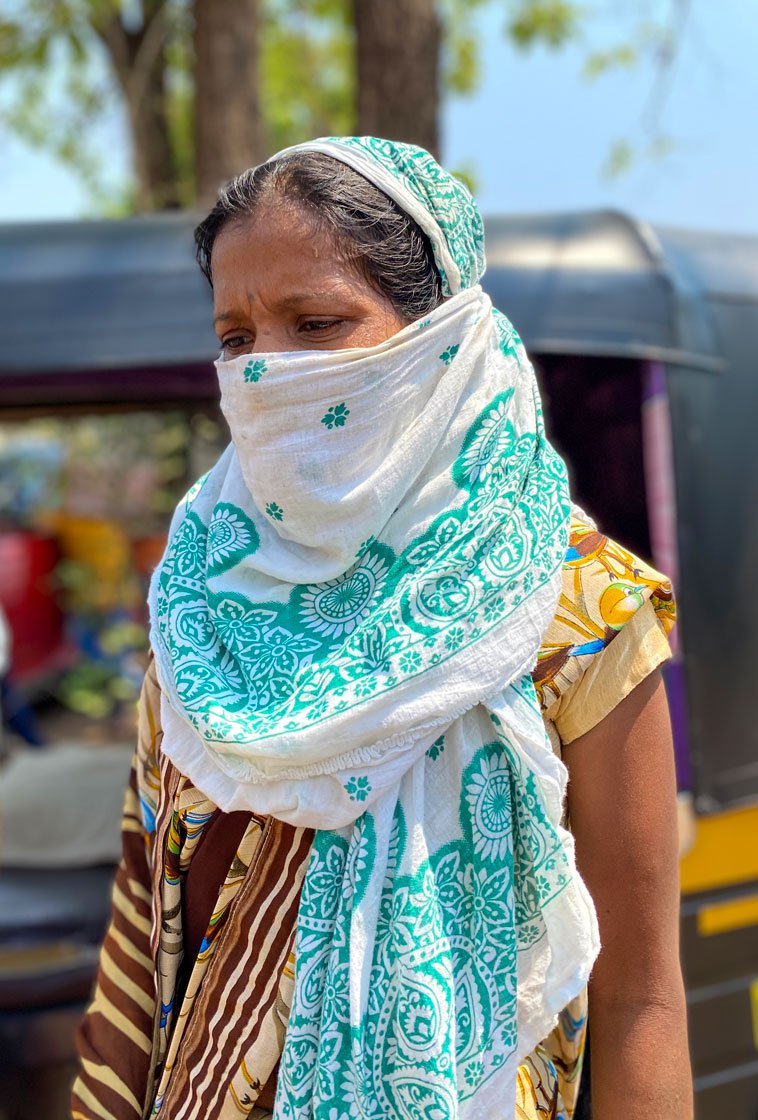 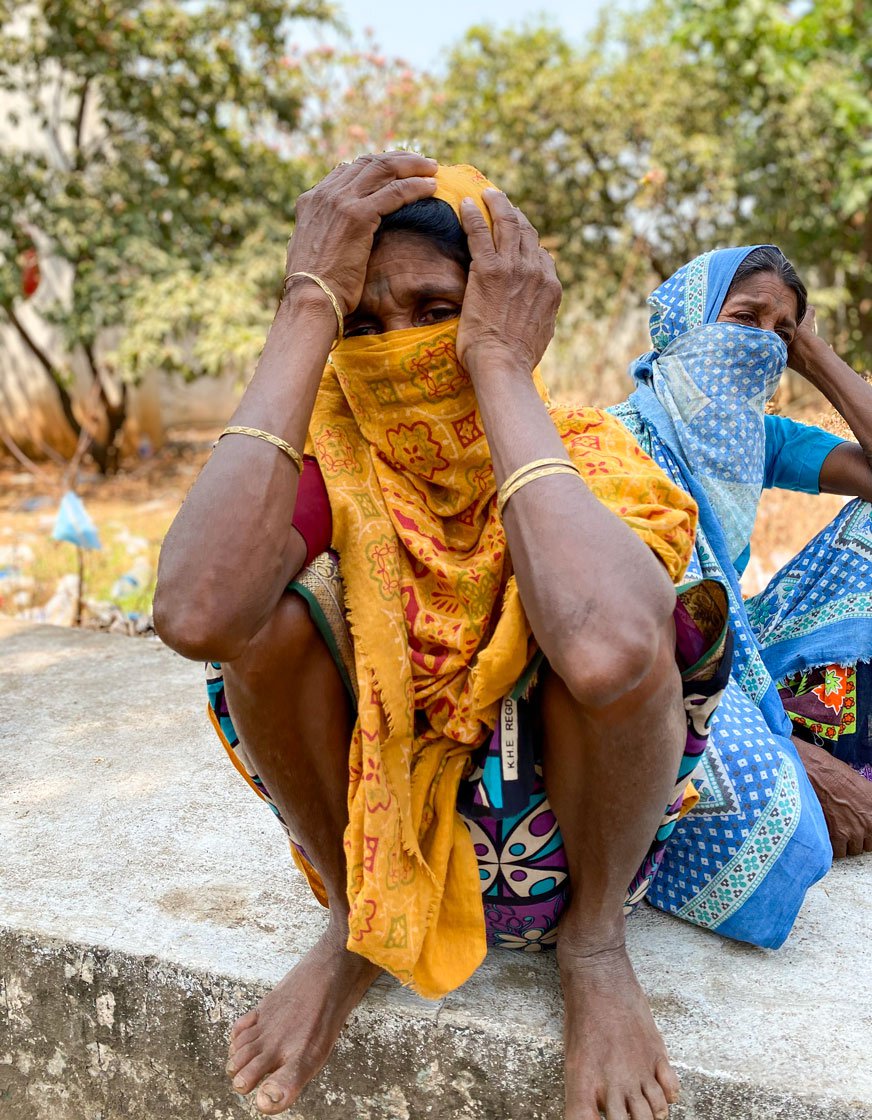 Malati Digha, Vaman's grieving wife (left) and relatives outside ReVera Hospital in Vikramgad: 'He could have recovered...'

“Even though he tested negative three times for Covid he was admitted in a Covid ward. The beds inside had no bed sheets or pillows. They didn’t even have hot water. He was in the ward for 10 days. One day before he died, he couldn’t urinate. His condition worsened suddenly. My sister kept trying to tell the doctors but they were all busy and wouldn’t listen,” says Guru.

Vaman worked at the local panchayat office in Takpada village. His family – they belong to the Thakur Adivasi community – includes two sons aged 8 and 6, and his wife, 31-year-old Malati Digha. She, along with Vaman’s parents, work on their two-acre farm where they mainly grow vegetables, millets and rice. “I got tired calling the doctors. Even with oxygen he couldn’t breathe properly. It was so dirty inside. He would have recovered if proper care was given to him but we lost him,” says Malati, crying.

However, the hospital’s Medical Superintendent told me: "The relatives of the patients will say anything. You should not believe them. They don't know what happens inside.”

In another corner outside the hospital, Mina Pagi is lying on the ground. Some people around are trying to hold her up. She attempts to get up but is unable to. After a while, she manages to sit, motionless. “She hasn’t moved from here since this morning. Her husband died and now she is left with their four daughters,” says Shivram Mukne, a farmer and family friend.

On May 1, Mangesh, 48, and Mina, 45, came to ReVera Hospital in an ambulance after he developed severe chest pain. Before that, Shivram says, the same day, Mangesh drove his motorcycle for nearly 15 kilometres from his home in Vikramgad taluka’s Khoste village to a hospital in Vikramgad town . Mina accompanied him on the bike. By then, he was also complaining of high fever and difficulty in breathing. Two days later, on May 3, Mangesh lost his life. 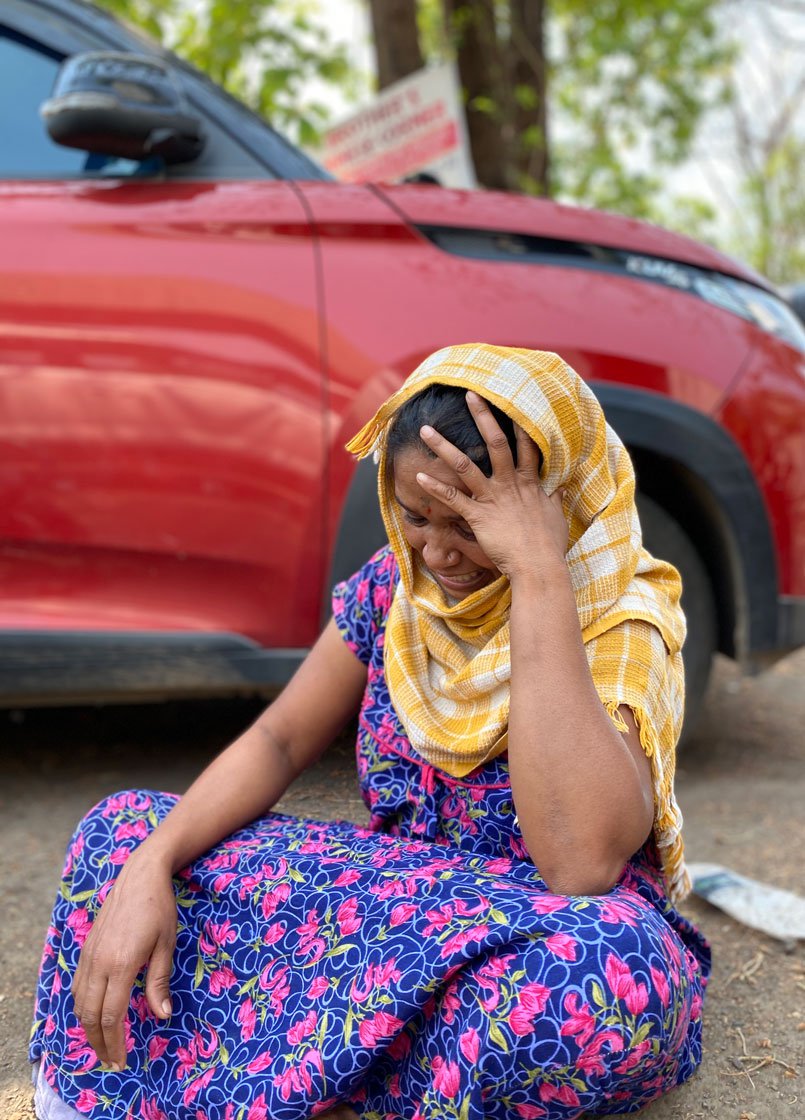 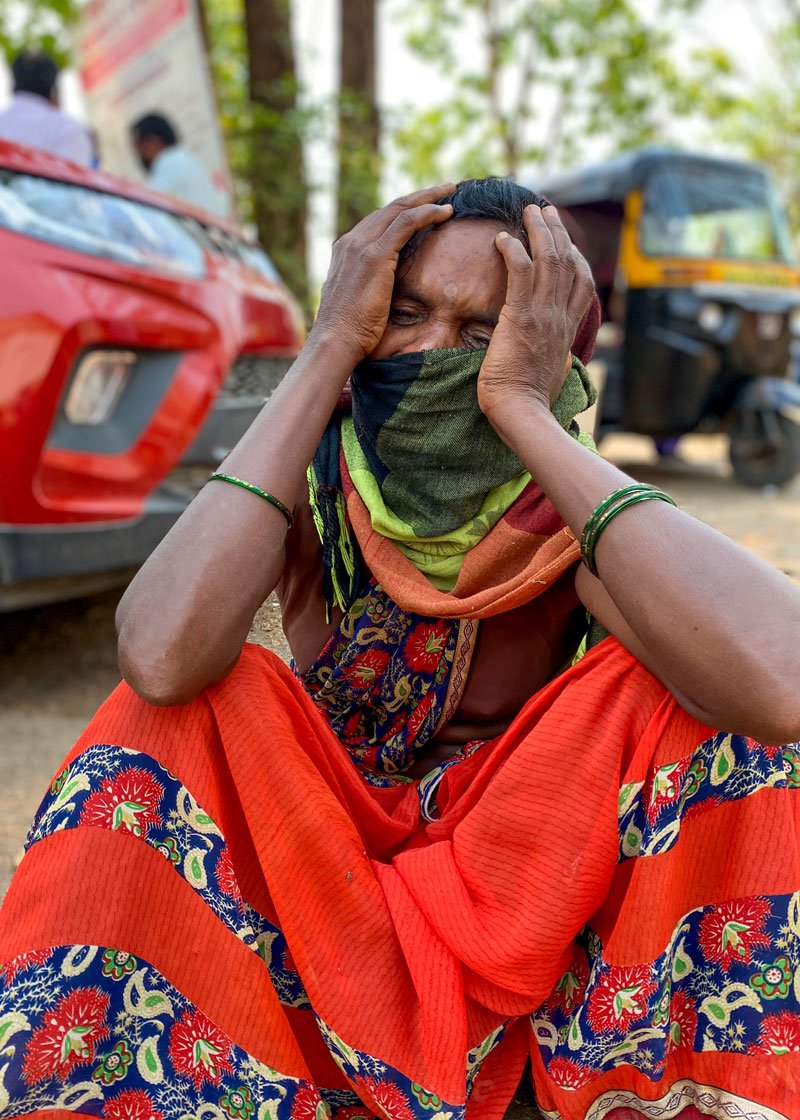 The hospital’s Medical Superintendent told me: 'The relatives of the patients will say anything. You should not believe them'

“The doctors at that [town] hospital told him to get admitted in ReVera. They gave him a letter and arranged an ambulance for him. After several hours he was given a bed at ReVera,” says Shivram. “His wife informed me that he needed oxygen and felt fine after it was given to him. But the doctors ran a test and admitted him in the Covid centre. There they gave 10-12 injections in the span of two days. His condition kept getting worse after every injection. So we were planning to move him to another hospital. But after midnight [on May 3] he got serious and they took him to the ICU. Within two hours they told his wife that he had died.”

I tried to contact doctors at the hospital, but could not get through.

Mangesh Pagi has left behind his family of seven – his parents, Mina, and their four daughters aged 19, 17, 11 and 7. He was a farmer and earned a living cultivating rice, wheat and bajra on the family’s one-acre farmland . The family belongs to the Katkari Adivasi community and will now have to depend entirely on Mina’s wages – she works at nearby farms earning Rs. 150-200 a day. “In our village we have not had work for over two months now [due to pandemic restrictions]. They already struggled with money and now we don’t know how they will manage,” says Shivram.

While Vaman and Mangesh at least managed to get hospital beds, Shyam Madi could not get one on time. In the last week of April, 28-year-old, Shyam developed high fever at his home in Vikramgad taluka ’s Yashwantnagar village. “We took him to a local [government] hospital. There he was given medicine and he felt better. The doctor had ordered some tests but the only pathology lab in Vikramgad was closed. After a couple of days, one night at around 3 a.m. he began struggling to breathe,” says Mahesh Moragha, recounting what happened to his wife Sumita’s brother in the early hours of April 26. 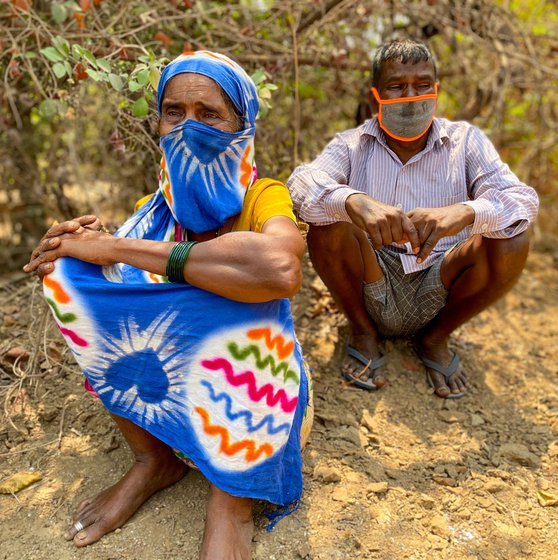 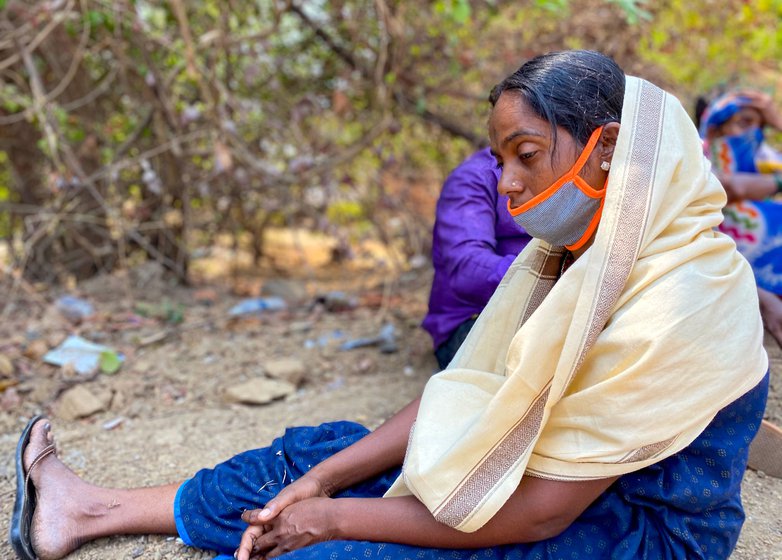 Mangesh Pagi’s parents mourn the loss of their son outside ReVera Hospital while his wife, Mina (right) sits stunned

“We first took him to another government hospital [in Vikramgad]. There they asked us to take him to a Covid centre. He still couldn’t breathe, and we managed to get an ambulance from a private hospital. It had some oxygen. But we couldn’t get a bed for him at ReVera. We pleaded, but the doctors said they were at full capacity,” says Mahesh. This first attempt to find a bed at Revara Hospital was made at around 8 in the morning.

For Palghar district’s total population of around 3 million across its eight talukas – Dahanu, Jawhar, Mokhada, Palghar, Talasari, Vasai, Vikramgad, Wada – there are 12 Dedicated Covid Hospitals, including ReVera in Hatane village. These have a total of 2,284 isolation beds, 599 oxygen beds, 42 ICU beds and 75 ventilators. Nearly half of the isolation beds as well as 73 oxygen beds were available on May 12, shows the district government website . Only one ICU bed and 3 ventilators were available by this date.

In the course of their desperate search for a bed for Shyam, Pankaj Patkar, who is married to Pooja, another sister of Shyam, along with a local CPM activist, managed to get an oxygen cylinder from Wada town in Palghar district. “The oxygen in the ambulance was about to get over and we reached with another cylinder,” says Pankaj, speaking to me on the phone. “We took him to a Covid centre in Boisar [around 40 kilometres away]. They even ran a CT scan, but there too we couldn't get a bed. We also tried very hard to get a bed in any hospital in Bhiwandi and Thane.” These cities are located within a 100-kilometre radius from Vikramgad. 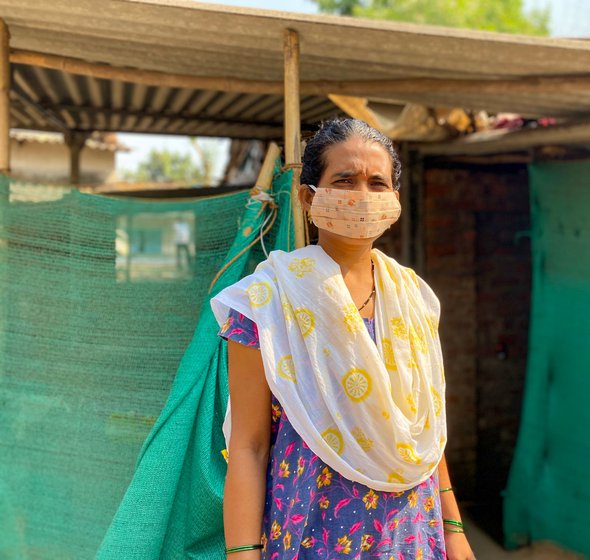 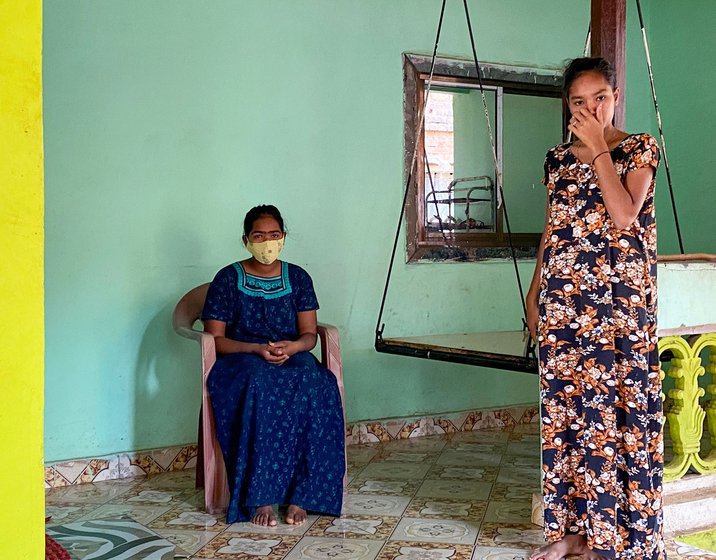 “But we could not manage and took him back to ReVera hospital,” adds Pankaj. This second attempt to find a bed in RaVera was made at around 3 p.m. – nearly seven hours after the first attempt. To cover the Rs. 8,000 ambulance cost, the family – they belong to the Thakur Adivasi community – borrowed from relatives.

“While we kept pleading with the doctors there to admit him, Shyam breathed his last,” Pankaj says.

Shyam, who worked at a local automotive company, had got married only two months ago. Back at her parents’ house in Yashwantnagar village, his newly-wed wife, 24-year-old Rupali, is sitting in her verandah on a dark-pink plastic chair. Her sister is tending to her and making sure she doesn’t fall. She has barely eaten since her husband passed away, and says in anguish: “We begged and begged for oxygen. All he needed was oxygen. If something happens to you, then your Mumbai city has big hospitals. But who will give oxygen to us people in villages?”